What I Cooked This Week: Roasted Spaghetti Squash with Parmesan, Mushroom, and Spinach, Sautéed Sirloin Tips with Bell Peppers and Onions, and Creamy Shrimp and Mushroom Pasta

This week I tried a healthy recipe, a new version of an old recipe, and another shrimp fettuccine recipe!

First up:  Roasted Spaghetti Squash with Parmesan, Mushroom, and Spinach.

My daughter introduced to eating spaghetti squash instead in place of noodles and I have to say...I really like it!  I can't convince my hubby to try it though. 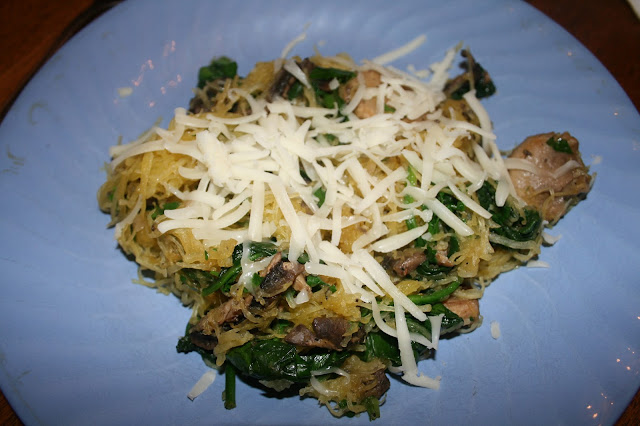 Even though this healthy version of "spaghetti" is more time consuming to make than traditional spaghetti, it is worth the extra effort....because it is delicious!  Of course, in my case, I have to make this version for myself and then regular spaghetti noodles for the hubby.  Life would be so much simpler if I could just get that guy to eat the way I do/want!  :)

If you never had spaghetti squash before and you don't think you could eat it !in place of noodles, I really urge you to give it a try (unlike my husband who won't let the stuff cross his lips).  You might be surprised!  You can find this recipe HERE.

My next dish is one I've made before many times.  I love to sauté steak with peppers and onions and put them in a tortilla or on top of rice.  I usually just throw everything in a pan and add some olive oil and spices.  This time I followed an actual recipe.  This one is called: 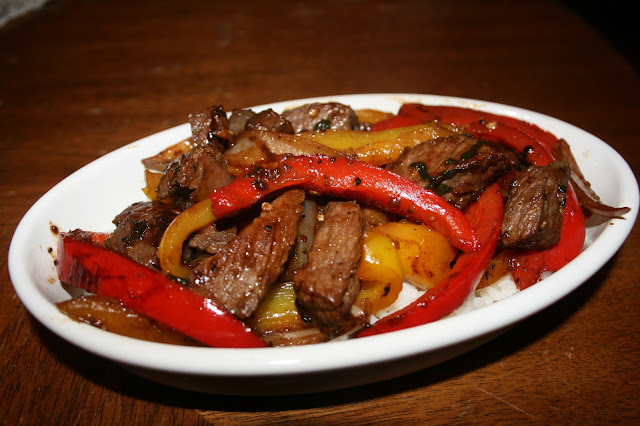 For this recipe you have the option of using soy or teriyaki sauce.  I chose soy sauce because that is what I had in my cupboard.  This recipe turned out perfect!  I absolutely loved the flavor and I will definitely be making it again.  You can find it HERE.

My last recipe was not as successful as the first two.  I tried to make Shrimp Fettuccine  again, and I think I officially give up and just buy fettuccine sauce in a jar from now on.  This recipe is called: 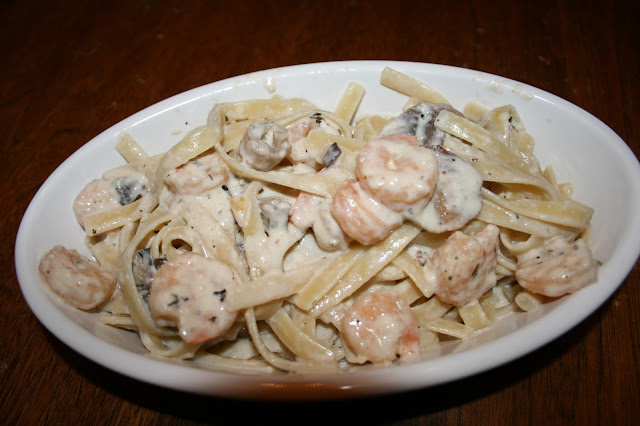 The flavor of this recipe was good, but even though I used the exact quantity of ingredients in the recipe, I did not get as much sauce as shown in the picture on the website.   It does say to add pasta water if the sauce is too thick.  I didn't think it was too thick, I just didn't think there was enough of it.

I also had a hard time getting the cheese to melt.  I cooked and stirred the sauce FOREVER and it never really melted and just seemed kind of grainy and chunky to me.  I finally gave up and just ate it as is.  It did taste good though...minus the grainy texture.  The sauce wasn't smooth as it should be.

If you know a way to get the cheese to melt and want to try this recipe, you can find the recipe HERE.

Email ThisBlogThis!Share to TwitterShare to FacebookShare to Pinterest
Labels: recipes