How to Make a Spring Wreath in Minutes

I love to  craft but what I don't like is anything that is too time consuming or costly.  Like everyone else, I am always pressed for time, and also, quite often the supplies to make something cost more than the finished product.  Today I have a spring wreath to show you that cost me nothing because I used supplies I already had and it took all of ten minutes to put together. 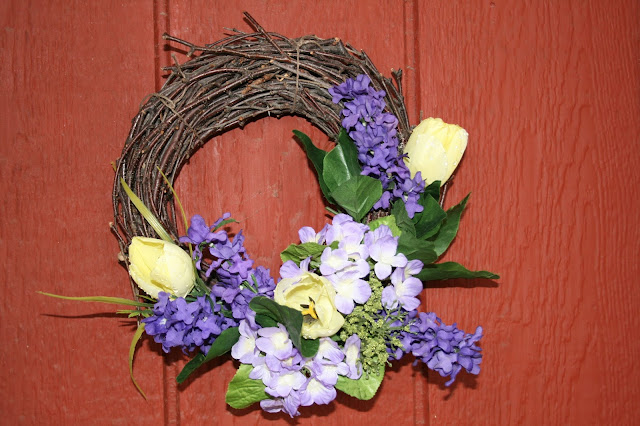 I received this very small grapevine wreath as a gift from a friend.  She had it beautifully decorated with sunflowers and it hung on a wall in my house till the flowers faded from the sun.  Eventually, I knew it's time had come, so I pulled off the old decorations. I thought the grapevine wreath was still re-usable and since it was winter, I  just wrapped some glitter holly berries around it and hung it on my porch.  This is what it looked like during the winter season: 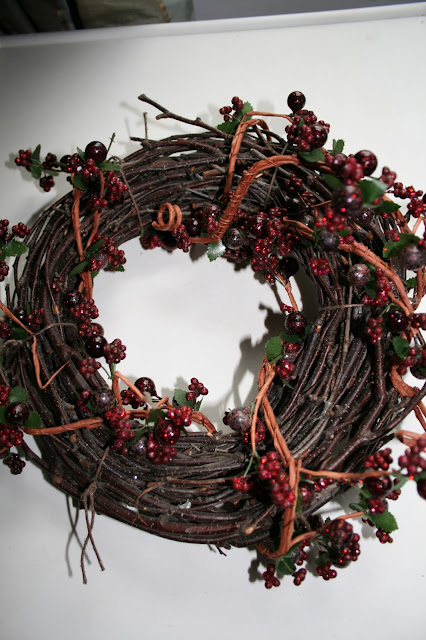 Well now that it is spring, I wanted a spring wreath for my porch.  So off the holly berries came and this is what is left of my wreath. 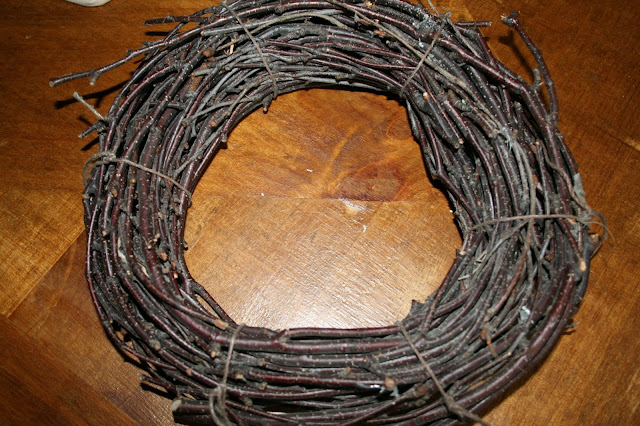 Now I don't have a huge storage of artificial flowers, but I always save pieces from other arrangements that are still in good shape and re-usable.  I have a small tote of spring flowers, a small tote of summer flowers, and one large tote of greenery.  Fall and Christmas florals are another story:  I have more totes of those than I can count!

I picked colors that I thought would compliment the red and white colors of my porch, and were also typically known to bloom in spring.

Because purple and red look great together, and lilacs bloom in spring, I chose three sprigs of lilac flowers.  I also chose this flower for it's cylinder shape.

My only tool I used was wire cutters to cut the stems to the length I needed.  I did not hot glue any of the flowers in place, because I want to be able to take them out and replace them with summer flowers later in the season. 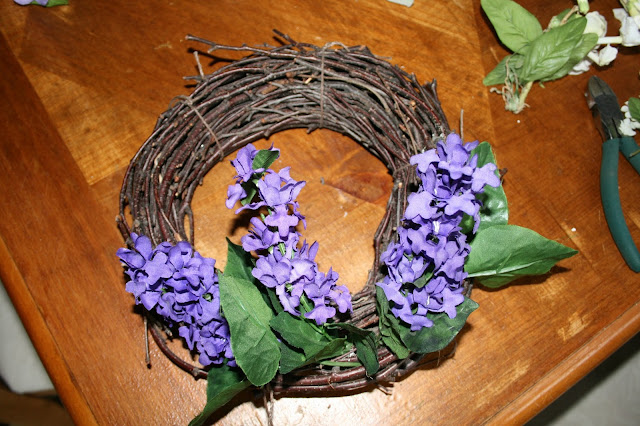 I simply stuck the three stems right into the grapevine wreath where I wanted them, making sure they were nice and snug.

Next, I picked a round shape flower, hydrangeas, that were a lighter purple than the lilacs and I placed them right in the center of the lilacs.  I thought it was a great filler and kind of acted like a bow because it was right in the center where I would normally put a bow if I used one, and it also beautifully filled in the space because of it's roundness.

Then I thought the wreath needed more greenery.  I had one interesting green plant in my stash so I decided to use it.  I cut it in half, then used the floral portion of that stem by the hydrangea and the leafy portion by the lilac on the left.  Can you see it?  It's a lime green color. 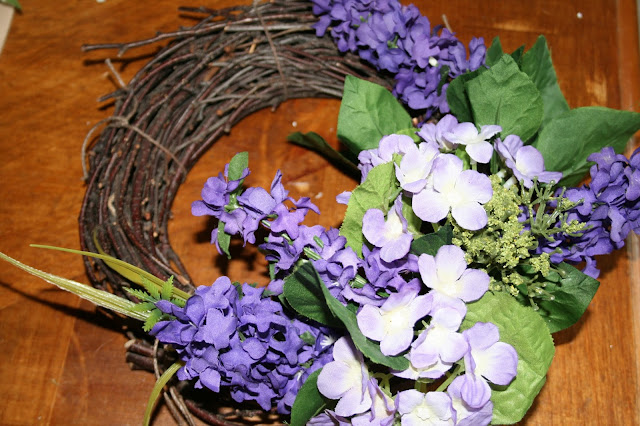 By now, my wreath was looking too purple to me and needed some color.  Because the center of the hydrangea flowers were yellow,  I thought my yellow tulips that I used in my Easter Centerpiece (see that post HERE), would work perfectly.  I hated to cut them, but I did anyway because I've already gotten my money's worth out of this bouquet of tulips numerous times.

Once every flower was in place, I felt one more lilac was needed to fill out the wreath, so I added it on the bottom. 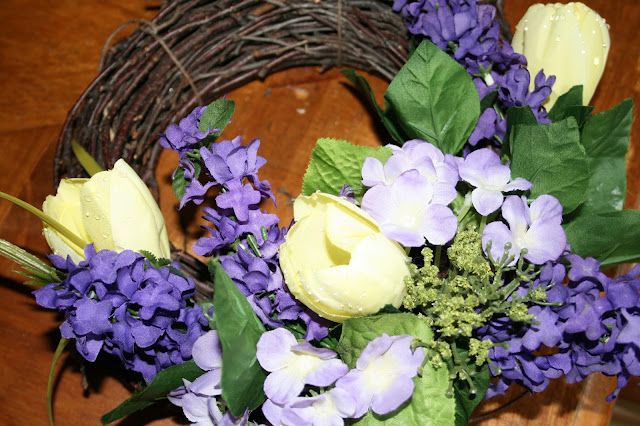 And with the addition of the three pretty tulips, my wreath was done.  I thought of adding ribbon, but I liked the way it looked without it.  I also liked just leaving a third of the grapevine exposed rather than covering the entire wreath. 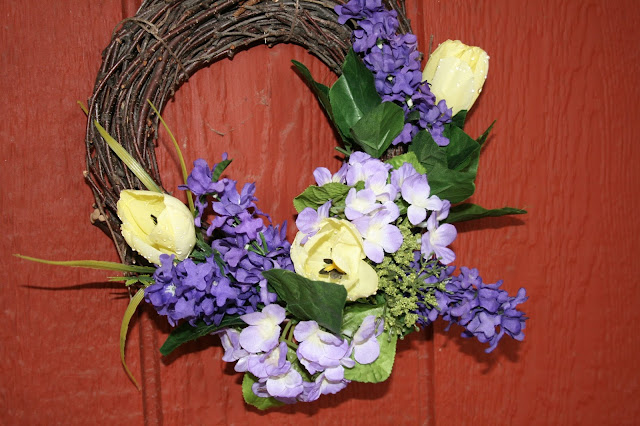 I then hung the wreath outside on my side porch.  Because I re-used supplies, it didn't cost me anything, so I'm not worried if the elements damage it a bit.  It is under a porch awning, but strong winds or sunlight could do some harm, so I would never want to put something costly here. 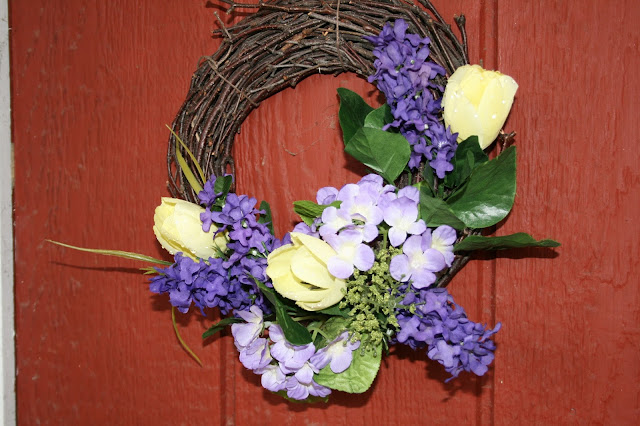 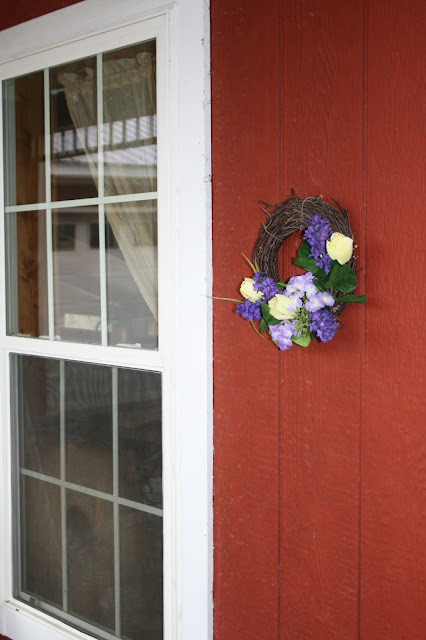 I also made a swag using the same techniques HERE in case you missed that post.