A Handmade Nativity Scene for Children

I am SO EXCITED to share with you today a handmade nativity scene I made for my grandchildren.  It all started with last month's Thanksgiving figures.  I made two pilgrims and two Native Americans out of toilet paper rolls (you can see that post HERE).  I got so many comments on Facebook over those figures, and a lot of hits to my blog.  I couldn't believe how many people loved them.  Well, hubby suggested I try my hand at a nativity scene.  I was like "Yeah, right!  Like I have time for that!".  😄 Well, it turned out for some reason I'm really on top of things this Christmas season, and I truly did have the time, so I gave it a shot.  Once I started, I was having so much fun, I couldn't stop.  It took me three days (not a full three days...three days in-between all the other stuff a homemaker does during the day) and this is what I came up with. 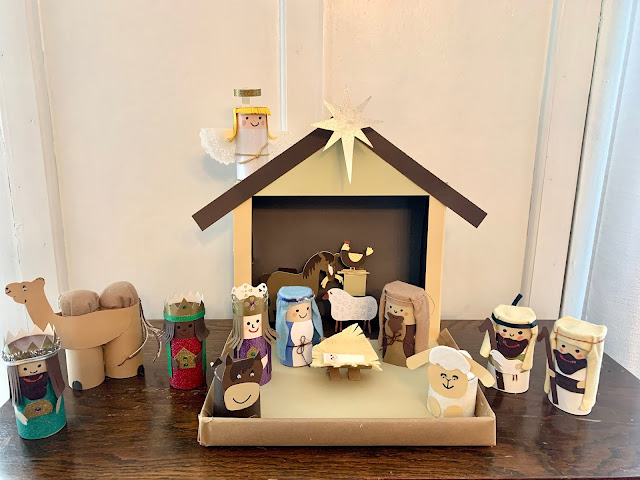 All the figures, with the exception of the animals in the diorama background, were made out of toilet paper rolls.  I cut the background animals with a Cricut machine and then glued them at different distances to the back of the box. 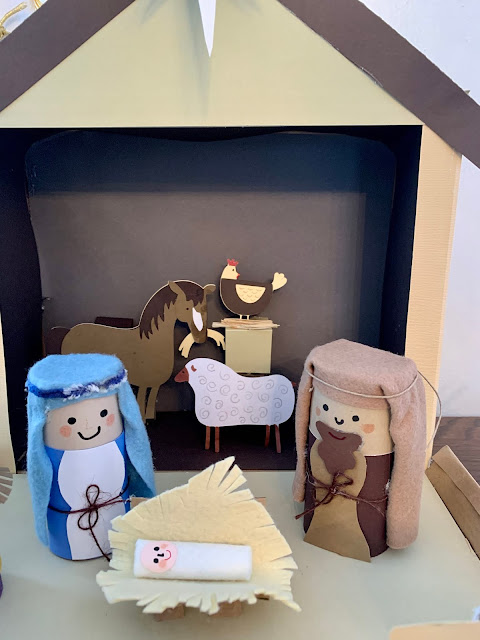 I purchased absolutely nothing to make this nativity scene.  Everything I used I already had in my stash.  Colored card stock was used for all the toilet paper figures, but I also used felt for their head dresses and beards.  Even the manager was made from a toilet paper roll that I cut in half, using one half to make legs for the manger. Baby Jesus is just rolled up white felt with a pink circle glued on for His face. 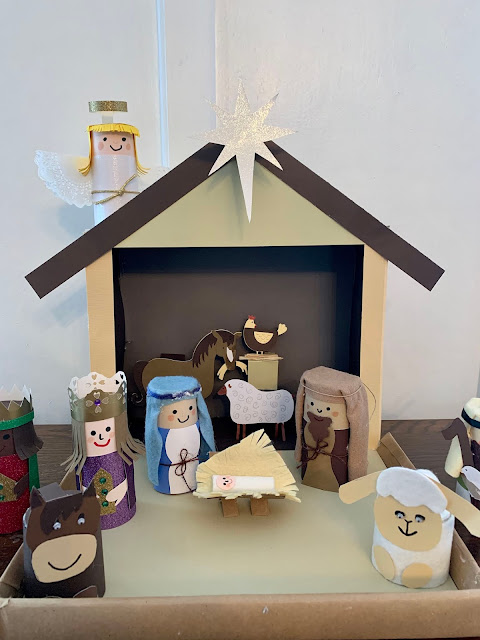 The manger was made from an old shoe box.  That was actually the hardest part of the whole project.  I first just wrapped the paper in brown Kraft paper, but it kept tearing and looked terrible.  So then I just kept added pieces of brown card stock over the Kraft paper till I got a look I liked.  I had to keep using different shades of brown because I didn't have enough of one color, but I'm glad it worked out that way, cause I love how it turned out.
The Bethlehem Star I googled off the Internet and printed out.  I then traced it onto white glitter card stock, cut it out, and glued it to the stable.  I created a roof line to the shoe box by just gluing strips of brown paper to the box.  I made it look like the star was hanging above the manger by taking the same color card stock as the roof line (it's very thick paper) and bending it twice gluing it once to the star and once to the box.
The angel body was made with white glitter paper.  Her wings are a paper doily folded in half.  Her halo is gold metallic paper. 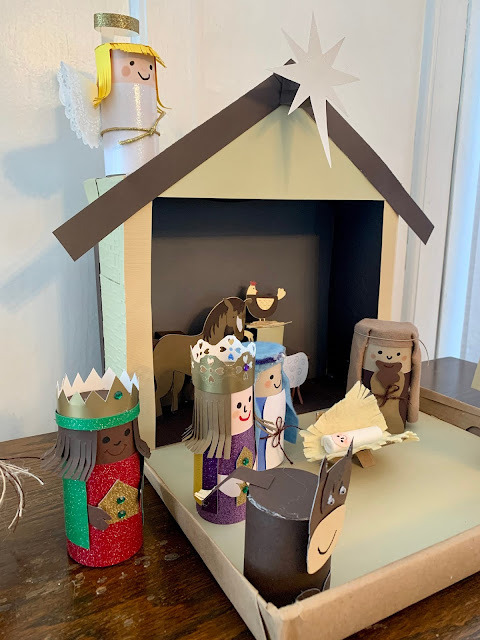 The three Wisemen were so fun to make.  I used glitter paper for their robes and gifts, and metallic gold paper for their crowns.  The camel was the only item I actually used a pattern for.  I found it on Pinterest, but the instructions were in another language, but I knew what to do by just looking at the pictures.  The humps are filled with quilt batting, and that's felt over the top.  The humps are just stuffed through the tubes.  The head and body I printed out on the computer and cut out and just glued to the tubes.  I added google eyes to all the animals because I knew the grandkids would love that. 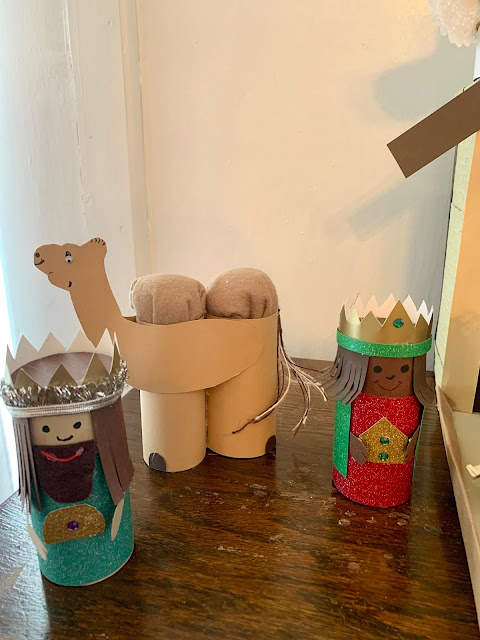 The only other two animal figures I made were a horse and a sheep.   The horse is made with paper only, but for the sheep I used white felt and cotton balls to give her some fluffy texture. 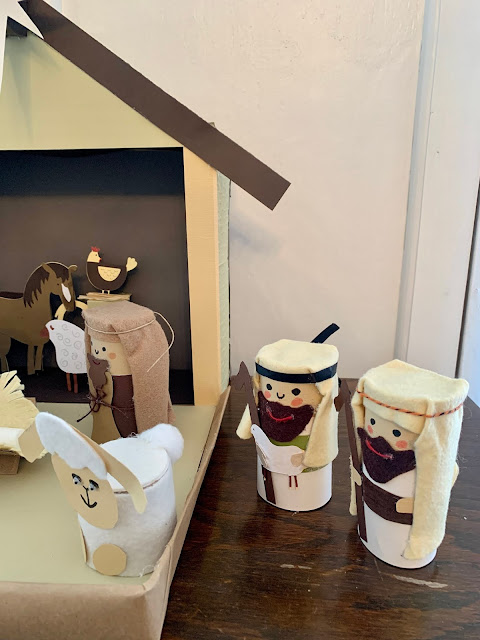 For the shepherds, I used paper for all their robes, faces, staffs, and the sheep one shepherd is holding.  Felt was once again used for their headpieces and beards.
Every Christmas Eve we read the Bible Story to our grandchildren before we open presents.  This year, I think I will do a little re-enactment using this nativity set as Grandpa reads the story.  But I hope my grandchildren, with careful instructions, will play with the set on their own too.  I'd love to have them imagine the story of Jesus' birth in their own creative play.  I grew up with a ceramic nativity scene in my house.  I remember many Christmases laying on my tummy, under the tree, playing with the nativity scene.  As a result, that ceramic set got chipped and broken and eventually thrown away because too many pieces were lost.  This one, even though it took time to make, costs nothing to make, so it will be more kid-friendly to play and learn with.
Sorry, I don't have any template or instructions to share.  One reader suggested I make a tutorial, but I'm only a hobby blogger and it would take so much time to draw, upload templates, and write instructions for you all.  Honestly, I really just looked at photos on Pinterest, and started cutting and gluing paper until I got the look I wanted.  There are so many toilet paper roll ideas on Pinterest.  Many of those are Etsy sellers who want to sell you a pattern to download and print out.  I didn't want to buy a pattern, and I didn't think I needed one, so I just eyeballed everything.
However, you can find the camel pattern HERE.  That one was free.  And you can find more toilet paper roll ideas on my Pinterest page HERE.
Have A Great Day!  Amy
Linking Up with these Fabulous Blogs HERE!
Posted by Amy Johnson at 12:00:00 AM