First, the disclaimer.  I have a freezer full of Italian Sausage that I'm trying to use up, so I substituted the chicken sausage for Italian sausage.    It probably defeated the purpose of the creators intent to create a healthier hash recipe though. :) 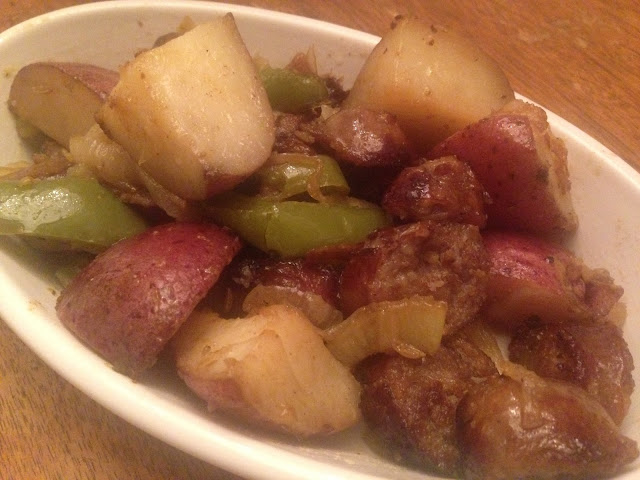 So what did I think?  It was good.  My husband thought it was good also, but nothing to go crazy over.  Just a nice hearty meal.  A great way to use up potatoes if they are starting to bud in your pantry.

It was very easy to make.  After you brown the sausage, you basically just throw everything into the pan and bake.  But there was a problem with the instructions in this recipe.  The recipe says to bake for 12 minutes, then turn veggies over and bake an additional 8 min.  When I read that I thought "Umm, there must be some mistake, potatoes will never be done that quickly.  They take at least 45 minutes to an hour to cook".  So I re-read the recipe to see if I missed something.  Nope.  That's what it said.  So I did as instructed, and guess what?  Surprise, surprise, the potatoes weren't done in that time frame.  So I just put it back in the oven, and about 45 minutes later they were done.  I was worried my meat would get over-cooked because it was all mixed in with the veggies now, but they didn't.

Would I make this recipe again?  Maybe.  But when I do, those potatoes are going in the oven thirty minutes before anything else!

The next recipe I tried was

This recipe was a win-win.  My husband and I absolutely loved it.  It's so simple and easy to make.  A really easy dish to throw together after a long day at work (or in my case, shopping!) 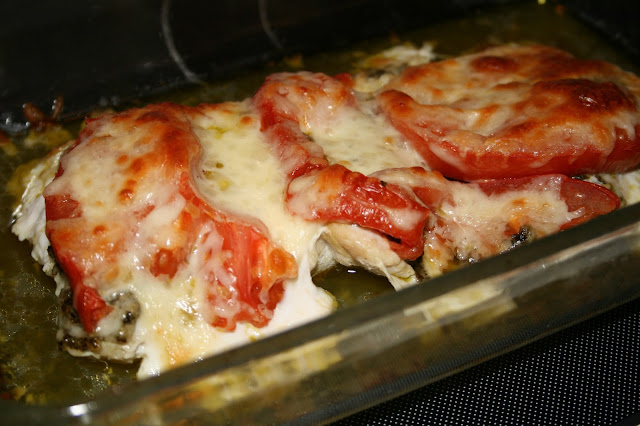 It's basically a chicken breast topped with pesto, a tomato slice, and mozzarella and then served on a bed of greens. 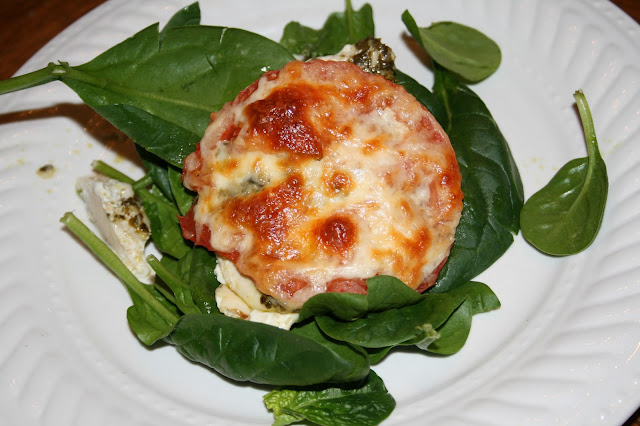 The flavor was absolutely wonderful.  Chicken breasts can get so mundane and boring if you eat them a lot;  this recipe really spices things up a bit.

My only complaint is that this recipe was only available in video form.  I had to watch the dumb video three times while putting it together.  I would have preferred a written recipe as well.  The video is super short so it wasn't that irritating.  And I'm probably the only idiot who's short term memory is so bad I had to keep checking the video for such a simple recipe.

You can find the irritating video for this recipe HERE, but take notes, so you don't have to keep watching it like I did! :)

My last recipe was also a winner, but it has shrimp and pasta so what's not to love?  It's called:

We liked this recipe, however, both of us found it a bit on the spicy side.  If I were to make this recipe again, I would cut the red pepper flakes in half or eliminate it all together and I'd also cut the green onions in half.

This is considered a healthy recipe in comparison to an Al Fredo shrimp dish.  I always find that when cooks make recipes "healthy" they tend to add a lot of spices to add the flavor that is missing when you take out the fat.  And that's fine, if you tolerate spicy foods;  but I do not.

However, it was a super easy dish to make.  You just boil the pasta, sauce the shrimp, and add everything to one pan.  A great recipe for a busy day. 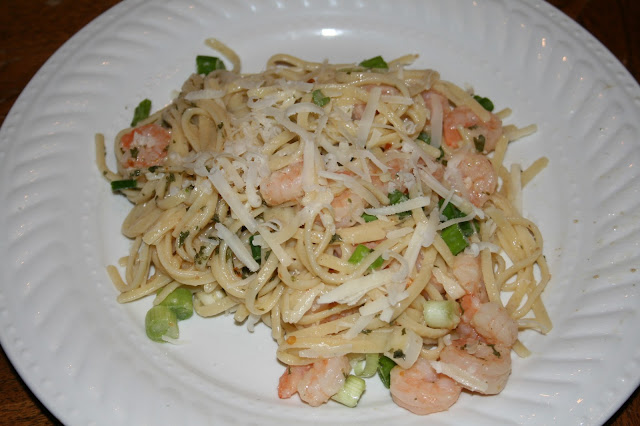