If you saw Monday's Fashion Post, you would already know I went hiking this weekend with my husband.  That post was all about the weather and what I wore;  this post is all about what I saw.  And wow, what magnificent fall beauty I saw.

This is the first fall in six years I do not have to work weekends, so my husband and I are really taking advantage of it to see the fall colors.  Last weekend we hiked in Merrick State Park and visited the surrounding towns, this weekend we drove two hours north to see Interstate State Park.

Interstate State Park is actually in two parts:  one part is in the state of Wisconsin and the other park is in the state of Minnesota.  The St. Croix rivers separates the two parks.  The park is known for it's scenic views of the river, rock formations, glacial potholes, and it's deep basalt gorge.

One word of caution if you visit Interstate Park:  Pick one park to park your car, and walk across the bridge to the other park, otherwise you have to pay to park your car twice.  It is free to walk-in either park, but both parks require vehicle parking permits because they are in different states.  Now, $7.00 to some people might not seem like a lot of money to park their car, but to frugal people like us, we didn't want to pay for parking twice.  So we hiked to the other side!  It is a long walk, but hey, it's good for you!

Since we already had a Wisconsin State Park Parking Permit that was good till the end of the year, we parked on the Wisconsin side and started hiking there.  We hiked four trails in the park:  Pothole Trail, Summit Rock Trail, Echo Canyon Trail, and River Bluff Trail.  That sounds like a lot, but they were all very short trails that intersected with each other.  I'm not even sure we hiked each trail in it's entirety, because we would hit an intersection and then get on a different trail.

I personally found these trails very confusing, but my husband said he knew exactly where we were all the time.  It just seemed one minute we were on one trail, and had barely walked any distance at all, and then there was sign for another trail.  He said it was because all the trails were loops that intersected with each other, and it made no sense to go back to the beginning of each trail to catch a different trail.  Whatever.  I gave up trying to figure it all out, and just hiked along for the views. 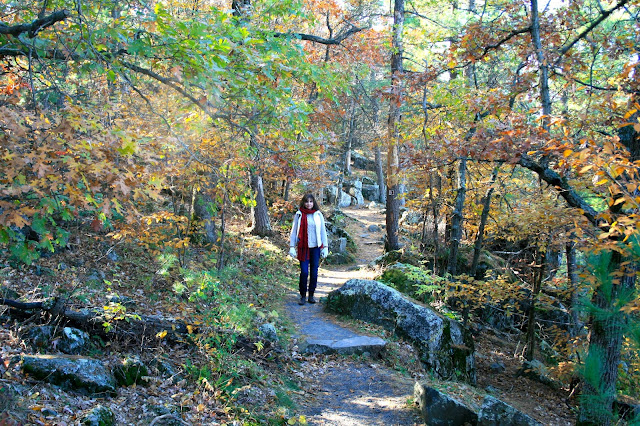 I was expecting the trails to be difficult for I knew they would take us to the top of the gorge for the scenic views.  But they were the easiest trails I had ever been on in my life;  and I've been on a lot of hiking trails as my regular readers are already aware.  Yes, on occasion, we were descending up, but most of the trails were level, gravel paths.  Everything was fairly well marked, although there was an occasional unmarked "fork in the road".  And when you did have to descend up there were lovely, level, wide stone steps or a wooden staircase with rails.

The trails offered a nice mix of scenic views of the St. Croix River and Gorge, the quiet still lake inside the park, the beauty of a cool, magical forest, and unique rock formations. 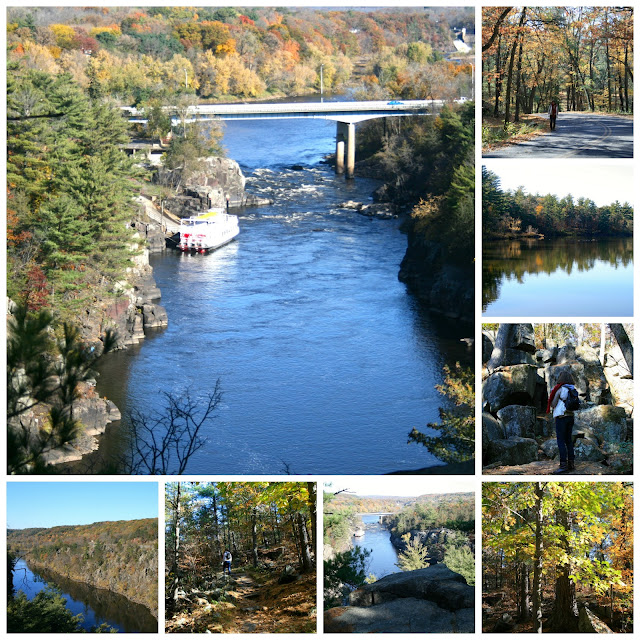 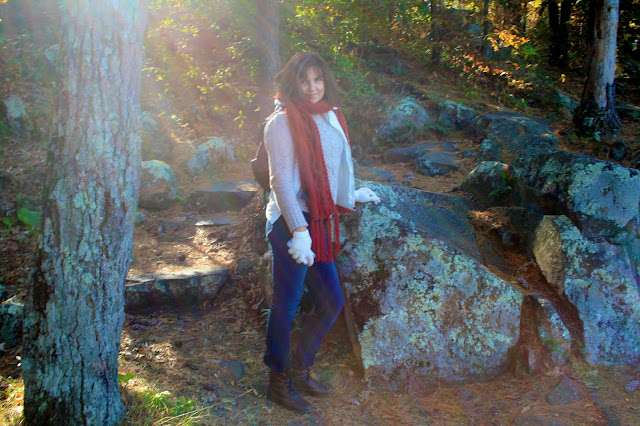 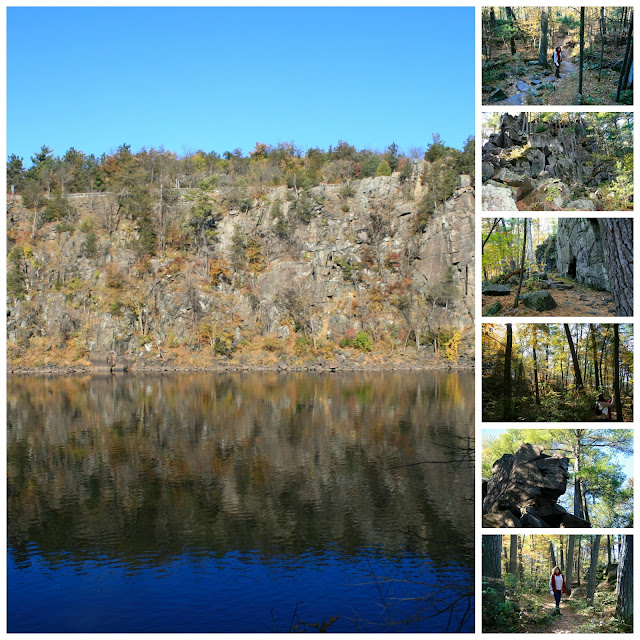 There was a lake in this park that had a dock and a beach, but not a sandy beach.  You could swim in this lake, but after my leech experience in Pattison Park back in September, I think it will be a long time before I get in lake water again!  :) 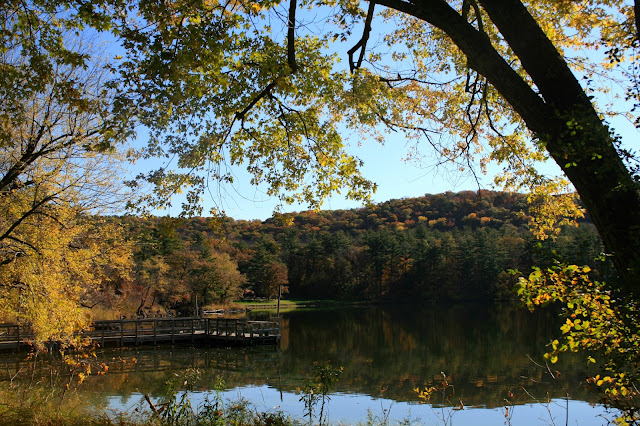 They also have canoes available for rent outside Interstate State Park.  When we were there, we saw one group of people being instructed on how to canoe.  We were surprised at that as we thought this was a pretty dangerous river to learn how to canoe in.  It's extraordinarily deep and has strong undercurrents. 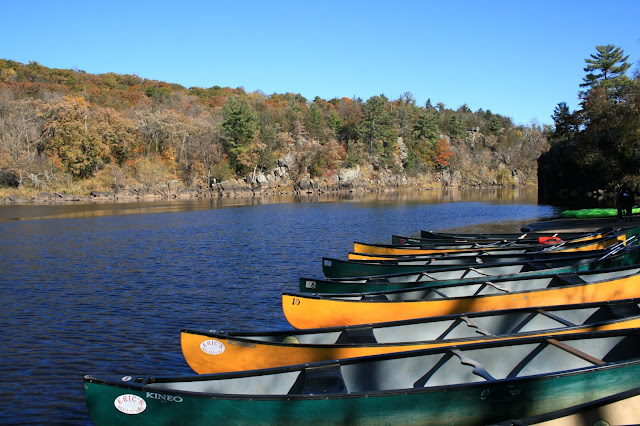 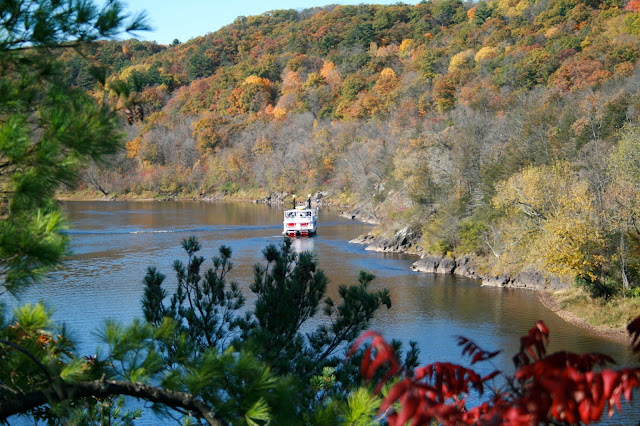 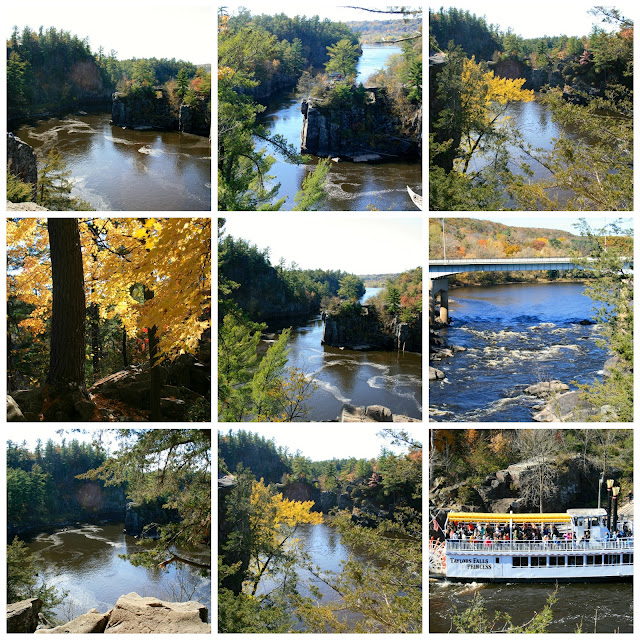 The Wisconsin side of the park is very natural and rustic, but well-maintained.  The Minnesota side of the park contains most of the Glacial Potholes and is more developed.  The potholes are very dangerous because someone could fall into them, so they are all fenced off, and there are nice walking paths connecting them all.

Now I'll be honest, I never heard of a glacial pothole before.  The first pothole we saw was on the Wisconsin side, it is pictured on the bottom middle of the photo collage below.  That's me in the upper right corner peering down into it.  We came upon it while hiking and I said to my husband "What is this?  This is dangerous!  Someone could fall in here and hurt themselves!  I can't believe they don't have a fence around this!"  There were no signs, markings, or a fence warning about this pothole.

A few feet later, we found another pothole.  But this one was well-marked and had a sign that explained what glacial potholes were.  Potholes are formed when sand or gravel are caught in whirlpools and swirled with such force that they would drill a hole straight down into the rock.  Larger rocks caught in the hole would polish the rock smooth.  In the lower right picture you will see a staircase descending into one of the potholes.  My husband and I went down into this and touched the walls…they were as smooth as glass.  The photos on the left and upper left center were taken while down in the pothole. 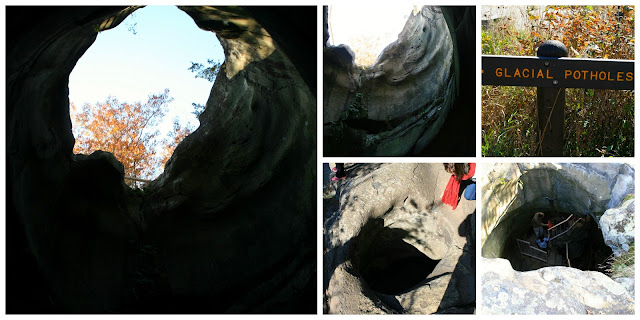 We only found two potholes on the Wisconsin side of the park, but on the Minnesota side there are over 80 potholes….the largest concentration of glacial potholes in the world!  They all differ in size;  some are only a few feet wide and deep, and others can be as large as ten feet wide and sixty feet deep.

If you have children, I would strongly recommend you visit this park if you live nearby or can work it into your next vacation.  There were so many children in this park on the day we were there, and they were having the time of their lives exploring all the different sized potholes, running along the walkways and peering down into the deep holes.  It was like a giant playground for them…but with a great educational experience too!  They also have guided tours of all the potholes if you really want to learn all the science behind them! 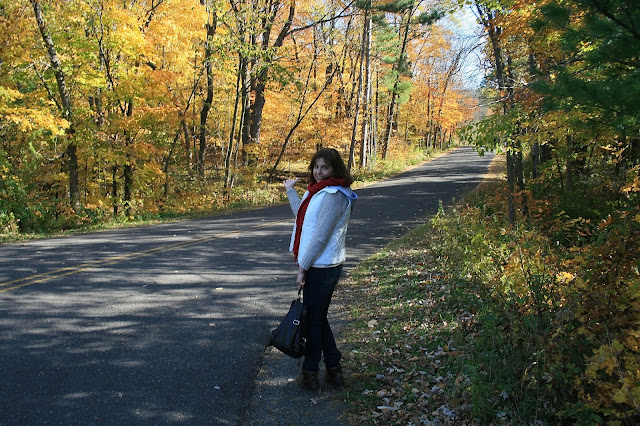 I hope you enjoyed reading about our fall hike in Interstate State Park!  I certainly enjoyed re-living it through my pictures and stories.

Linking up with these Fabulous Blogs HERE!