Daytona Beach, Florida: Different Than What I Expected and Planned

Several weeks ago we were helping our kids move twenty three hours away to Orlando, Florida.  If you missed the news of that big event, you can catch up HERE.  We only had two "fun" days while there, since the majority of the time we were unpacking, moving furniture, visiting the DMV, setting up bank accounts, yada, yada, yada.  One of those fun days was visiting relatives that live in the area, and the other fun day was spent at DAYTONA BEACH!

Now, I have been to the ocean numerous times in my life, but never in the summer months.  Being from the north, we 'snowbirds' flock to warmer climates during the cold months.  So every time I visited the ocean, even though the air temperatures were pleasant and mild, the water was always too cold to actually swim in the ocean.  So I was determined, since I was finally in Florida in AUGUST, that I would actually put on a bathing suit and swim in the ocean!  Uh, yeah.  It never happened.

You see, even though we have had a lot of great vacations the past few years, the weather on every vacation we have ever taken has never cooperated.  Normally wherever we go a 'Record Cold Spell' just happens to hit the week we are there, even though it was nice and warm the week before.  This time I thought, it's August, in Florida, there is no possible way a record cold spell could hit.  And I was right, there wasn't a cold spell, but a severe lightening storm instead!

We drove through a horrible downpour just getting to Daytona, and I prayed it was behind us when we arrived, but the dark clouds above us indicated otherwise.   When we arrived at Daytona, we found a place to park, and quickly hit the beach, never bothering to change into swimsuits, because we feared the dark, luminous clouds would open up and drown us at any moment. 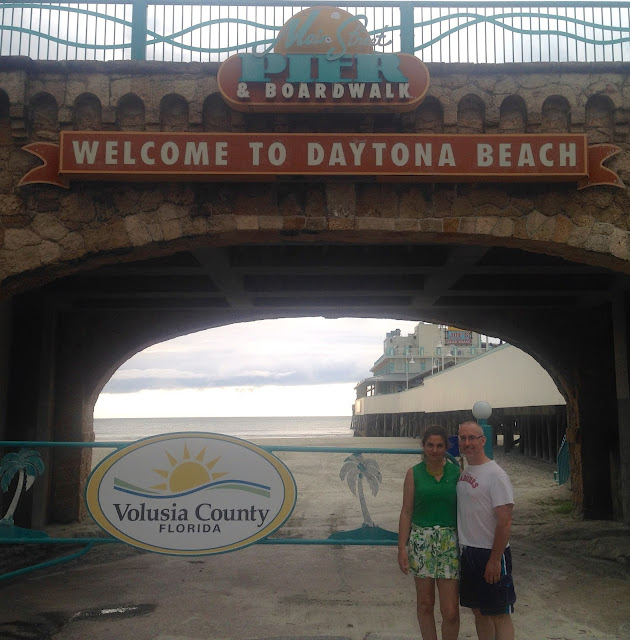 We grabbed a quick picture under the Daytona Beach sign, and then headed straight towards the beach.

The water was so warm compared to how it is during November or December when I'm usually in Florida.  I really wanted to get my swimsuit on and go deeper, but until those clouds went away for good, I was best to just leave my clothes on and wade knee deep only. 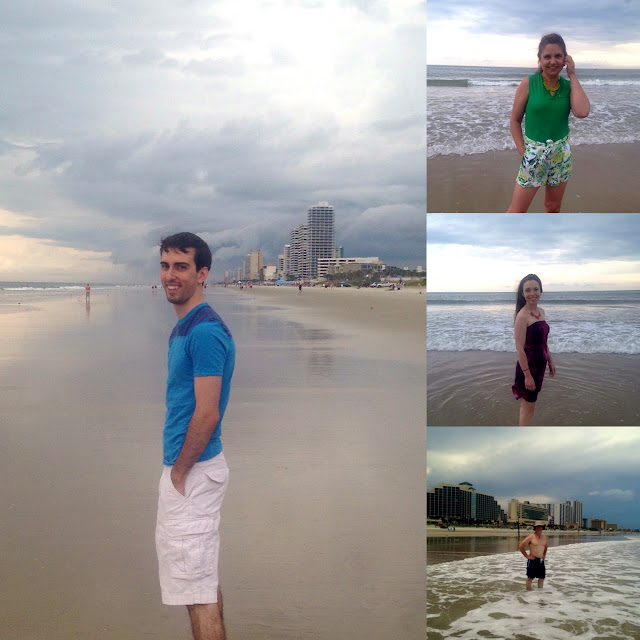 At first, it was kinda depressing being there on a cloudy day.  I dreamed of laying out in the sun, with my pretty new sun hat that my daughter bought for me at Charming Charlies, and getting a really great tan.  But then I began to see a real beauty in all the pretty storm clouds, and I thought, 'This isn't so bad.  It's just different than what I expected and planned.' 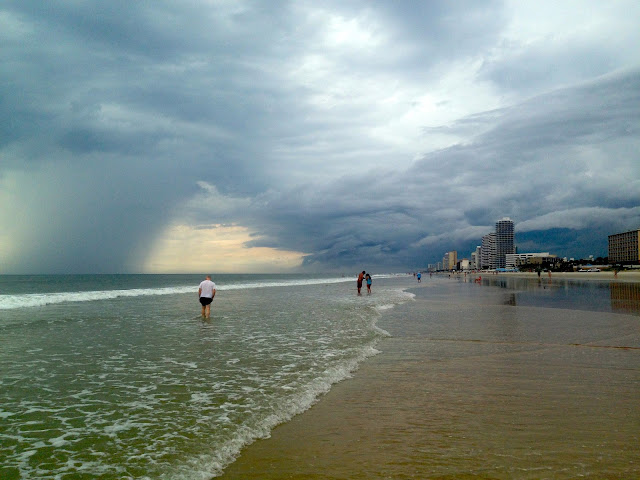 We saw a flock of Pelicans fly across the water.  I couldn't believe how HUGE they were! 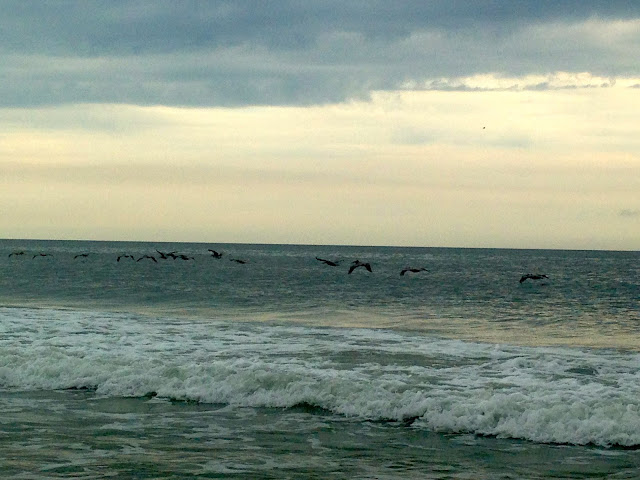 And then it got really exciting, the lifeguards started driving up and down the beach telling people to get out of the water and go back to their hotel rooms or inside their cars because a lightening storm was coming.

I have never been to a beach that you could drive on before.  I am not a race car fan, but of course I'm aware of the Daytona Beach Raceway, and I do know they even had races on the beach in the past (not sure if they still do).  The most interesting thing about Daytona Beach is that anyone can drive their car right onto the beach!  They have 'Beach Ramps' which are basically toll ramps that take you right down to the beach.  It's a really neat idea because if your staying at the beach for the day, you don't have to walk a long ways carrying coolers, chairs, etc.  You just drive, park, and enjoy!  It cost $10.00 to use the ramps, but it last all day, and you can even just sit in your car and drive the beach for miles, enjoying the view.  It's amazing.

I never thought that driving a car on a beach would be possible because I'm use to sand that you sink your feet into.  But this sand is as hard as pavement…so the car wheels never sink.   However, it does get softer the closer you get to the water. 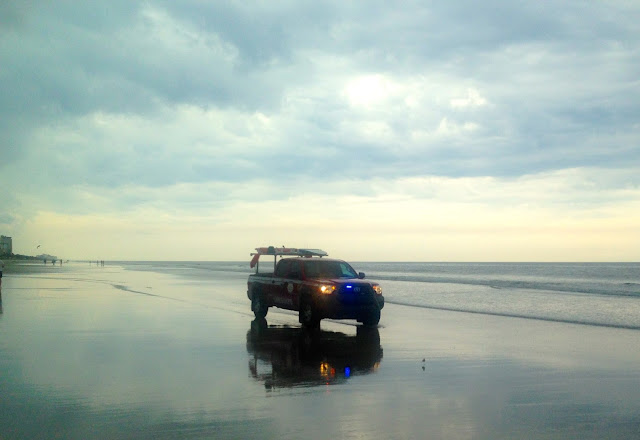 After the lifeguards chased us off the beach, we decided to wait out the storm on the pier's deck.  It has a great view of the water, the city of Daytona, and the beach.  There were several 'windows' on this deck where you could order food like pizza, hot dogs, etc., and then just eat at the tables and chairs on the pier. 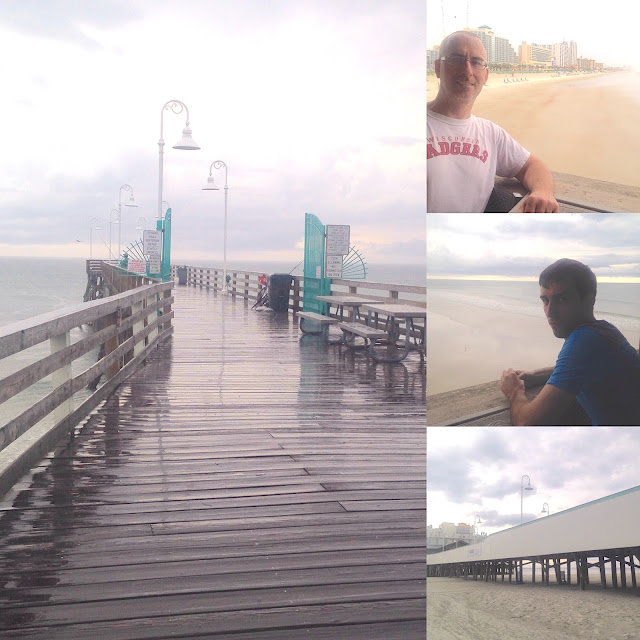 We eventually grew tired of waiting out the storm on the deck and decided to explore all the fun shops in town.  They basically all sold the same things:  T-shirts, knick-knacks, beach toys, towels, etc., but we checked them all out nevertheless.  I found a really cute long sleeved pink tee that had an all-lace back, with the Daytona Beach logo on front, and I bought it of course!  Can't pass up an all-lace back! 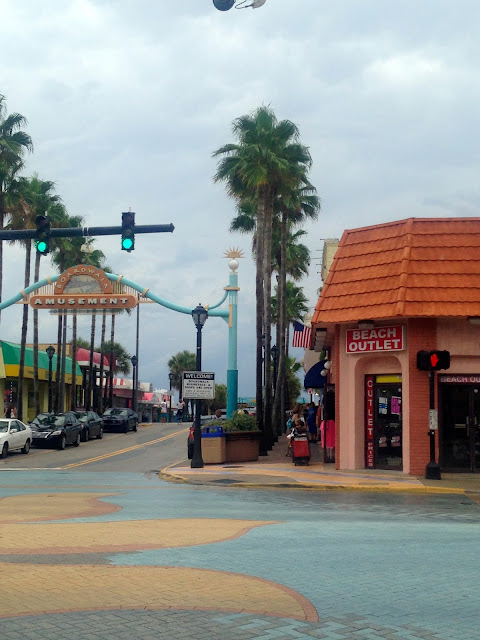 This restaurant was all decked out for Nascar! 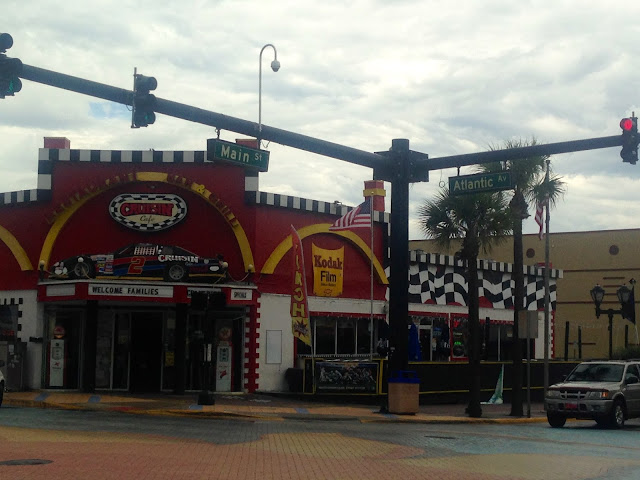 I always love the colors and architecture of beach towns.  I am drawn to the pastel colors and Caribbean vibes they put out.

There was a small boardwalk, where there was a restaurant and eating area, and a few rides. 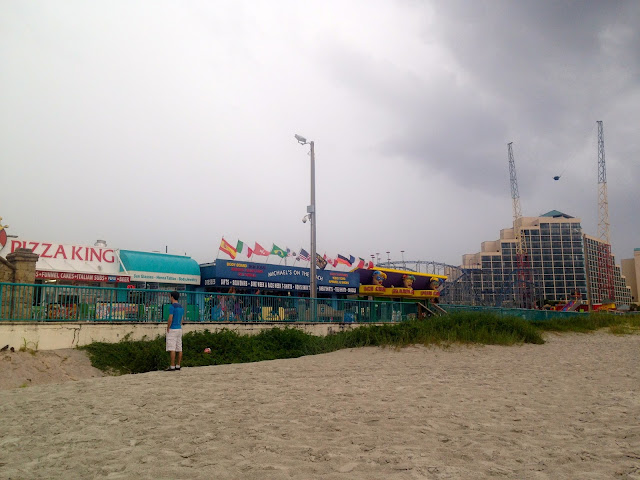 By now the storm had passed, the sun was starting to peek through, and we were getting hungry so we decided to eat. 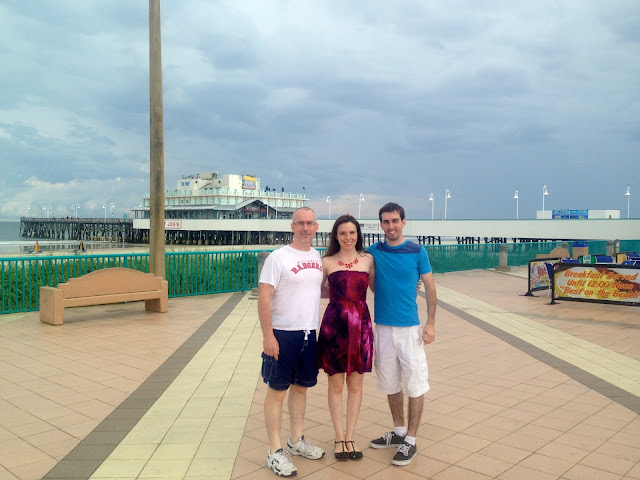 The pizza looked pretty good, so we each got a slice (except for Ashley, who eats gluten-free, so she just ate a lunch she brought with her).  It wasn't long before a few visitors joined us.  They were the ugliest birds I have ever seen, and they sure weren't afraid of people.  In fact, they came and sat right at the table with us, taking a spot on an empty chair. 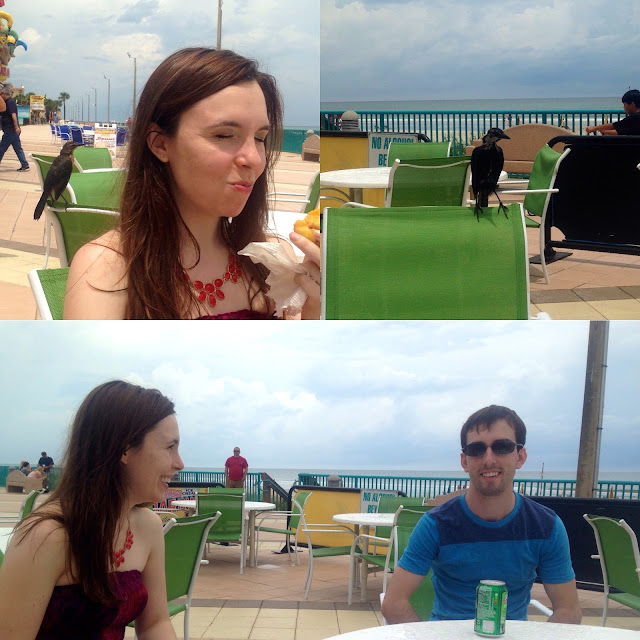 My husband did not notice the 'Do Not Feed The Birds' sign and tossed one a french fry.  It wasn't long before we had an entire flock at our table!  We now understood why there was a sign.

By now, it was a beautiful day.  The storm blew over as quickly as it came.  So we headed back to enjoy the beach once more, but we still didn't change into swimsuits for we knew we didn't have much time. 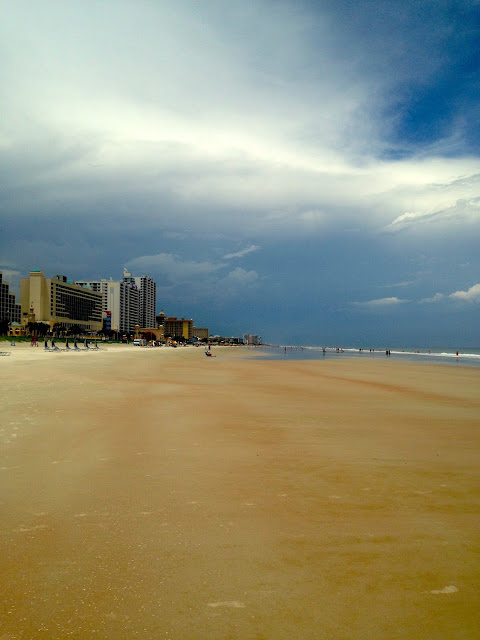 There is a nice indoor restaurant on the pier as well as the outdoor vendor windows. 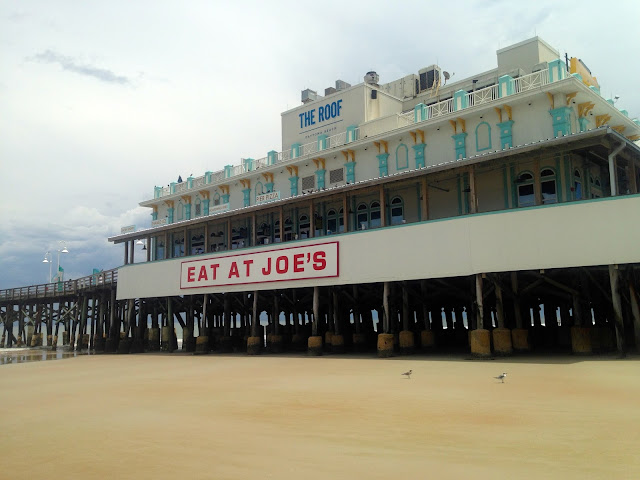 I could just sit and watch and listen to ocean waves for hours, could you? 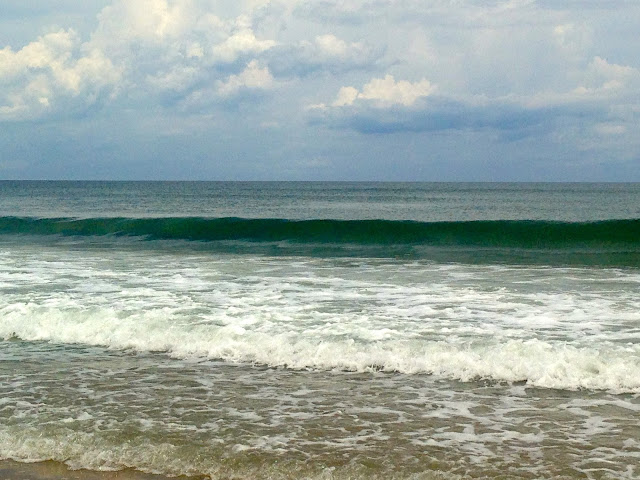 I was expecting the beach to be packed on a late summer day, so I asked a store owner if it was always so quiet here.  He said "No, the rain kept people away".  I don't know how everyone else knew it was going to rain that day.  Whenever we checked the weather forecast in Florida, rain was predicted everyday, because it does rain almost everyday, but only briefly. 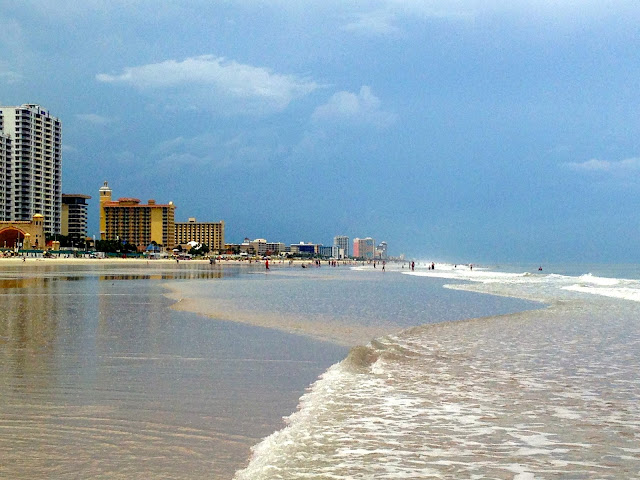 We searched for shells, but only found a few keepers.  Some beaches have a lot more shells than others.  I would not say that Daytona is a good shell beach. 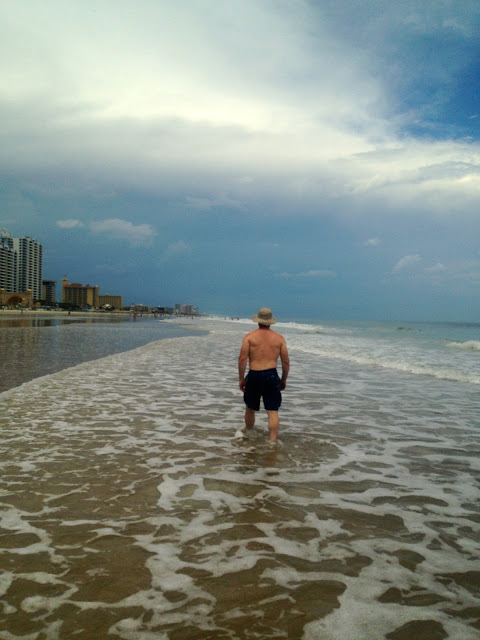 We did find it odd that if you stood still in one spot when standing in the water, you start to get dizzy and sink a bit because the water pulls the sand out from underneath your feet.  It was really freaky! 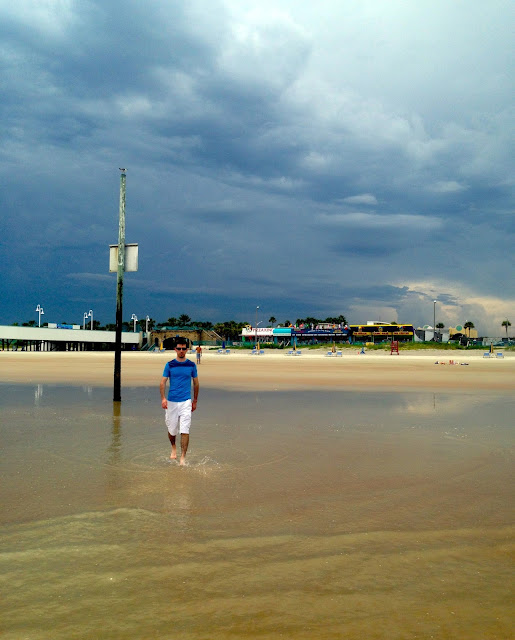 If your new to my blog and wondering who everyone is, I am the lady in green with the tropical shorts, and that is my husband in the goofy sun hat.  The beautiful girl is my daughter Ashley and the 'cool, handsome' young man is my son Jordan.  We were missing our son-in-law Jason that day.  He had to work and felt really left out, but we couldn't wait till he was done with work to drive to Daytona, it would have been too late.  We missed him though! 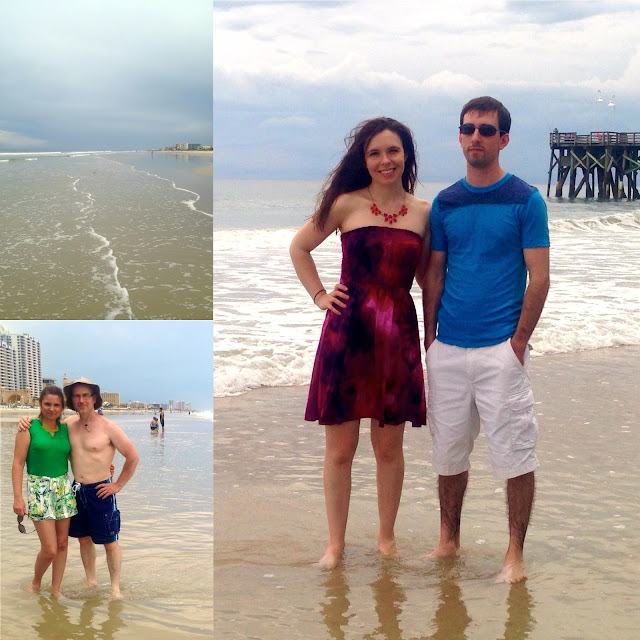 Yes, it was sad that I never got my full, hot, sunny day on the beach that I always dreamed of, but it ended up being a pretty nice day.  I mean, how many people can say they got chased out of the water by lifeguards in a vehicle because of a lightening storm?  And how often does one get to just enjoy the solitude of a beach in the middle of summer without the crowds?  That's the one thing about traveling that always makes the highlight of a trip:  the unexpected.  The fun, interesting, and exciting things you never plan, yet you wouldn't have had a great time without them. 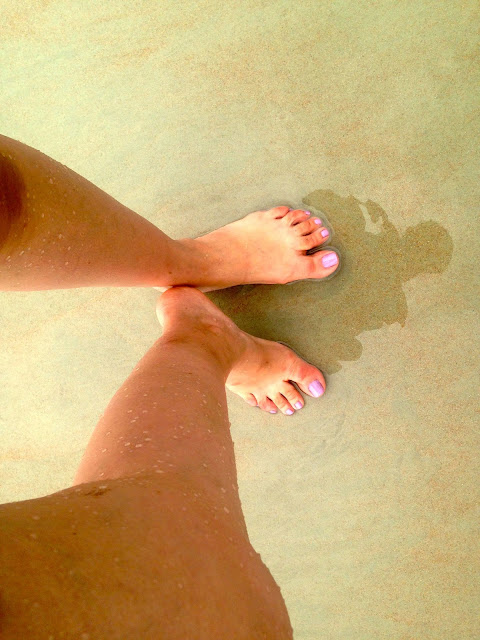