Hello!  In honor of the New Year, I decided to make a Happy New Year card.  My image and paper is from Daydream Designs.  The main image and clock are from the set 'Happy New Year Color Digi Set' (which is also available in outline) and the polka dotted paper is from 'Happy New Years Paper Pack'.  My sketch is from Mojo Monday (270).  I used Nesties to make more circle shapes next to the clock and the scalloped border,  and I put Stickles on the fireworks and confetti in the main image. 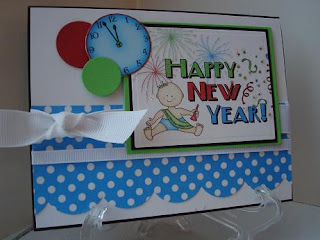 Have a great day and a Happy New Year!

Hello!  I hope everyone had a very Merry Christmas.  I had to work Christmas Eve, but I didn't mind it because I enjoyed the peaceful atmosphere at the store for a change, and I was also able to get a lot of work done.  Our church didn't have a Christmas Eve Service and our daughter (who is a professional singer in Chicago) had to sing at a Midnight Mass, and spend Christmas Day with her in-laws, so we won't be celebrating Christmas till Saturday...then the fun begins!  Anyway, it's freezing cold here in Wisconsin, so I thought I'd make a winter card using some Daydream Designs images and papers.

I started with a old sketch from 'I Love Sketches'.  The images are from Daydream Designs Colorized Digi Set 'Snowbabies'.  The papers are digital papers from Daydream Designs 'Winter Chill Digi Paper Pack', and 'Winter Flakes Digi Paper Pack'.  I stamped a retired sentiment from the Stampin Up! set 'Happy Winter' over the snowflake image from the 'Snowbabies' set.  I then put Stickles on the snow and the snowballs.  The girl and snowball stash were cut out and popped up on dimensionals.  The snowflakes are pre-cut felt embellies found in the dollar bins at JoAnn's Fabrics and Crafts.  Pom-Pom trim, ribbon, and adhesive crystals were added for embellishment. 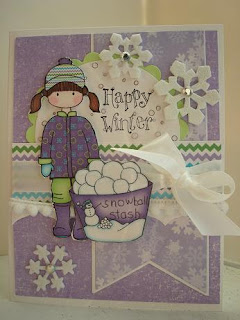 Hello and welcome to another Digital Tuesday Challenge. This week's challenge is 'Layers':  Simply make a card or project with lots of layers on it and be sure to include at least one digital element.  Our sponsor this week is 'Crafts and Me' and they are giving away three digis to one lucky randomly chosen winner.

To make my card, I turned to a Splitcoaststampers Sketch (SC414) that uses lots of layers.  Five layers to be exact, six if you count the card base.  My image is from the Daydream Designs "Santa Please Color Digi Set".  This set is also available in outline too.  I printed the sack and reindeer out and cut them out and popped them up on dimensionals.  I stamped the sentiment on the sack with a stamp from the dollar bins at JoAnn's Fabrics and Crafts.  A simple bow and some red flocked brads were my only embellishment.  All the paper is scraps from my stash.  This was a great sketch to use up those scraps! 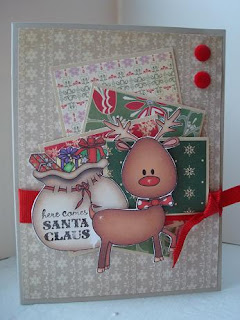 Hello!  For those of you who may have read my previous blog post you might find my post title and card somewhat humorous if not hypocritical since you already know how much I hate snow.  However, let me remind you, I did say I enjoy looking at the beauty of snow through a large picture window...I just don't like driving in it, walking through it, touching it, or any other physical contact with it whatsoever! LOL!  But, I do love SNOW GLOBES and I'm madly in love with this set by Daydream Designs called 'Let It Snow Color Digi Set'.  This set is available in both outline and color versions.  I chose to use the colored version since it's easier to work with, (coloring snowmen can be so challenging), and I loved the colorized version of the sentiment, which is also included in the set.  My sketch is yesterday's Splitcoaststampers sketch (SC415).  I used a Cuttlebug snowflake embossing folder for the background.  The felt snowflakes were purchased at JoAnn's.  I can't even begin to tell you how quickly this card came together...My Kinda Card!  I love quick and easy.  I simply printed the image, cut it out, and popped it up dimensionals.  It looks like a lot of time when into it, but I probably had it done in less than 30 minutes. 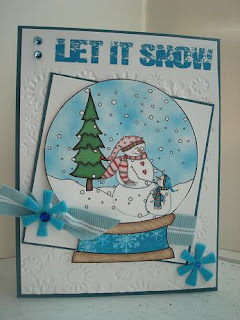 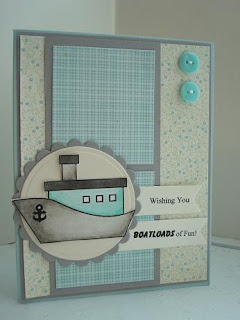 Hello!  Today I have another Christmas Card to show you.  You will be seeing lots of Christmas Cards from me this month, as it is the season!  My image today is from the  Daydream Designs set 'Deck the Halls'.  I printed the image twice and cut it out.  The poinsettia is popped up on dimensionals once.  The sketch is from Clean and Simple.  The sentiment was found in the dollar bins at JoAnn's Fabrics and Crafts.  I put Gold Stickles in the center of the flower. 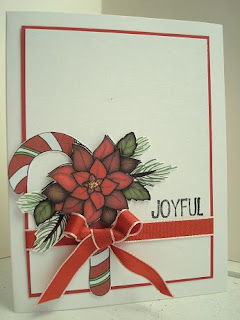 Hello!  Today I have a Christmas Card to show you.  The Cardinal image is from the Daydream Designs set 'Deck the Halls' and the sentiment is from DayDream Designs 'Christmas Blessings Sentiments'.  I popped the Cardinal and sentiment up on dimensionals.  The sketch is this week's Splitcoaststampers Sketch (SC413).  My paper is unknown, it was laying in pieces on the bottom of my Christmas Paper tote and I thought it went well with the colors of the Cardinal so I used it. 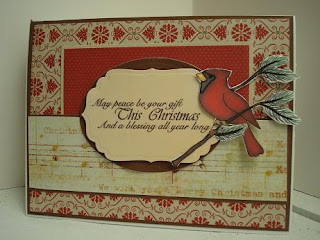 Hello and welcome to another Digital Tuesday Challenge.  This week's challenge is 'Non-Traditional Christmas'.  Simply make a card or project that uses non-traditional Christmas Colors and be sure to include at least one digital element.  Our sponsor this week is Stamp Fairy and they are giving away a $10.00 gift certificate to one lucky randomly chosen winner.

To make my card, I used the Stamp Fairy image "Barry Countdown to Christmas".  My sketch is the Paper Players (SC119) and my papers are My Mind's Eye '12 Days of Christmas'.  I printed the image three times and popped up the belly area once, then popped up just the feet and nose twice.  I put Stickles on the stars. 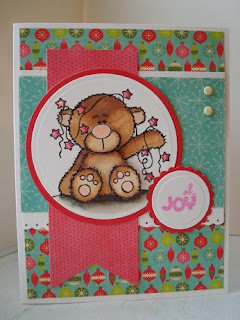