Camping as a Couple and Our Hike to Little Manitou Falls

Several years ago my family decided to try tent camping.  We started the first year with just one night at Devil's Lake State Park,  to see how we liked it.  To our surprise, we really enjoyed it and decided to camp for two nights at Willow River State Park!  We discovered that when you get away from a house, and away from all the distractions like the television and internet,  you really draw closer together.   So we determined that every year we would make a family camping trip a top priority.  But this year, all our children moved to Florida the week we had planned to go camping.  Well rather than cry and boo-boo about it, my husband and I decided to go camping…..alone!

We picked Labor Day weekend so we could have three…yes were up to three nights tent camping now…nights and two days camping.  We chose Pattison State Park because it is only two and half hours a way, it is near two big cities, and it has Wisconsin's tallest waterfall!

But we wondered, what would camping as a couple be like?  Will it be boring when we only have each other to talk to?  After all,  the biggest highlight of camping with other people is sitting around a campfire till late in the night talking.  And without extra hands around to make light work, will it be too much work for two people to make it worth it?  I didn't know, but I definitely wanted to try it.

When we stopped at the park office to check in, the Ranger's were surprised we were tent camping without kids.  My husband joked with them and said "Nope, it's just us.  We just packed them up and dropped them off in Florida.  Now were going to have fun without them!" I thought it was odd that they seemed surprised, but I suppose tent camping is usually for the young or families with children.  Older people tend to camp in RV's.

When we arrived at our campsite it was already 5:00 p.m. and we had to start a fire and set up our tent before it got dark at 8:00.  My husband did everything.  I just stood around and watched for the most part.  I did help 'try' to keep the fire going, but because we didn't have time to gather kindling and only had the wood we purchased from the Ranger station, it did not want to burn very well.  So my husband had to stop a lot from setting up the tent to tend the fire.  This is where an extra pair of hands would have come in handy.  My son Jordan would have been the kindling gatherer!  I did help with the tent when it came time to put the poles in and lift the tent up, so I wasn't totally useless.  :)

The tent we have sleeps five, so it is quite comfortable.  I could stand up in the middle and my head would touch the roof.  We brought couch cushions from home to sleep in.  We put several cushions together to make a full side bed, then inserted them inside a double sleeping bag.  They were quite comfy except they kept wanting to separate during the night.  But we have plans to solve that problem in the future. 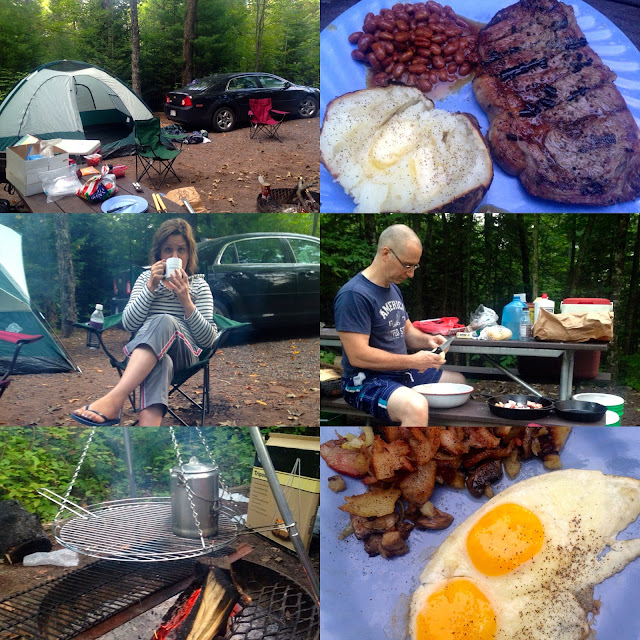 Once the fire got going and the tent was up, the relaxation and the fun began.  Because it was just the two of us, we could eat Ribeye steaks instead of hamburgers and hot dogs.  That's one benefit of camping alone:  you can eat better!  We wrapped potatoes inside aluminum foil and threw them right into the coals.  Oh, they were so soft and delicious!  And for a side dish, I just opened up a can of pork and beans and cooked them right in the can, over the coals.  Everything had that smokey, roasted, campfire flavor, and was so delicious!

After we were done eating, we had to clean up the campsite for we knew they had bears in this park and we did not want any late night visitors.  We decided not to just sit around the campfire and talk, in fact, we never did that once the whole weekend.  The campfire was solely used to cook, not to entertain.  Once it got dark, we just showered, then went inside our tent.  I brought my laptop with me so we always watched a DVD before bed since it got dark so early and we weren't ready to sleep at 8:00 p.m;  and then, well, we spent the rest of the night enjoying having a tent all to ourselves!  It was very romantic.

For breakfast my husband did all the work again.  That's the best part of camping for me:  he does all the work and I just sit and enjoy!  He chopped up bacon, mushrooms, onion and leftover baked potatoes from the night before and threw them in a cast iron skillet with lots of butter.  I made fried eggs and campfire coffee.  Would you believe my favorite part of camping everyday is waiting for the coffee to perk?  It is!  Campfire coffee is the best coffee!  It is so robust and delicious!  Better than any Starbucks coffee I ever had!  I wish I could drink it  everyday!

Our campsite had a beautiful view of the lake and we saw some amazing sunsets and sunrises. 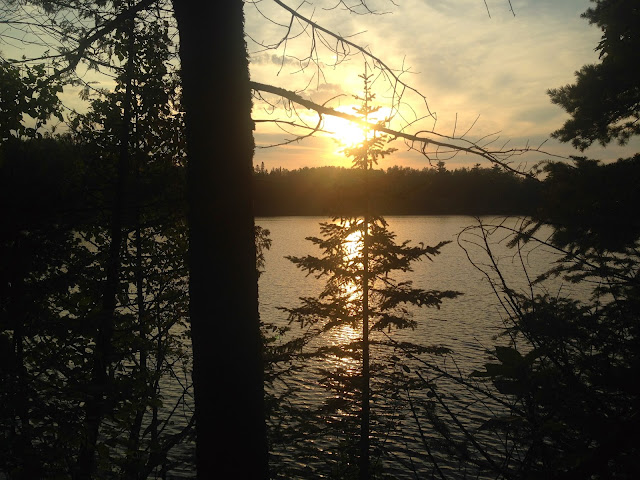 The next morning, after breakfast, we set out to start hiking.  We knew this park had two waterfalls, and we wanted to see them both,  saving the tallest waterfall for last.  This post will just be about Little Manitou Falls, and I will post pictures of the bigger waterfall next week.

In addition to having great lake views, our campsite also had direct access to the trails and the beach.  We never had to get into our car and drive to a trail, we just walked right behind our campsite, and there it was!

Here are some pictures of the lake as viewed from the trail behind our campsite.  It's just as beautiful during the day as it is at night. 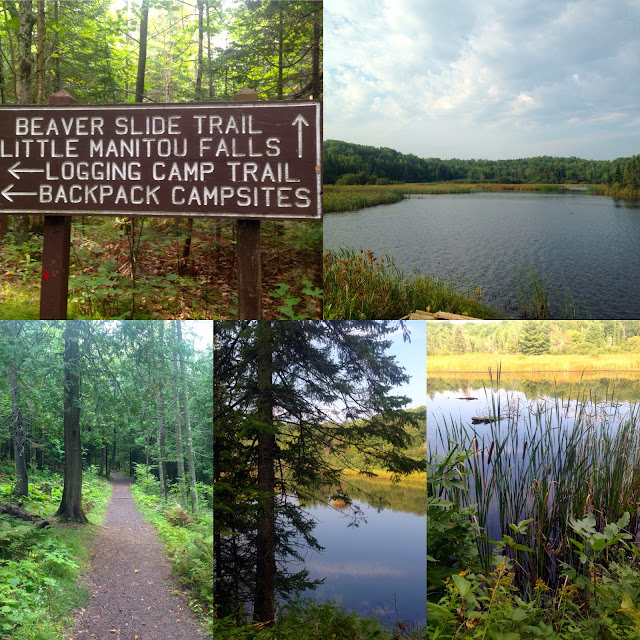 The trails in Pattison State Park are very well marked with large, informative signs and very clear, level trails.  Anyone of any age or ability could hike these trails:  very family, dog, and elderly friendly.

The Manitou Falls trail is about three miles round trip.  It is one of the most beautiful and enjoyable trails I have ever hiked because it is mostly level, and the paths aren't covered in rocks and tree roots.  It also has amazing views all along the hike because it runs right along the Black River.  We got to listen to babbling brooks and see gorgeous river views for the majority of our hike. 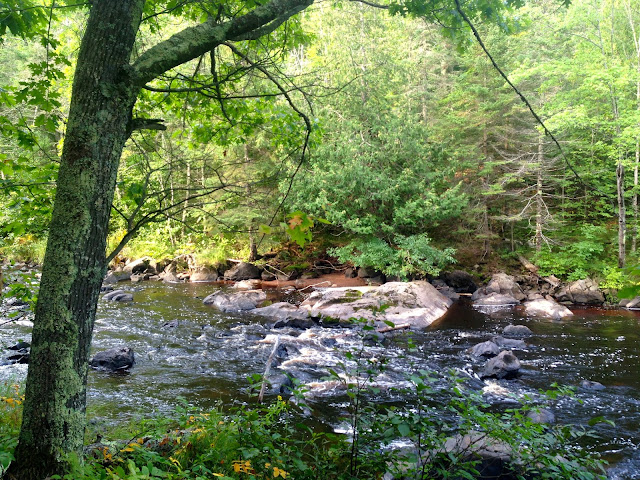 My husband and I are big nature lovers and took our time exploring every little miraculous thing on the way to the falls.  We marveled at how a single beaver could take down an entire tree with just his teeth, we admired large trunks of trees,  massive boulders, beautiful fall flowers, and gorgeous river bends. 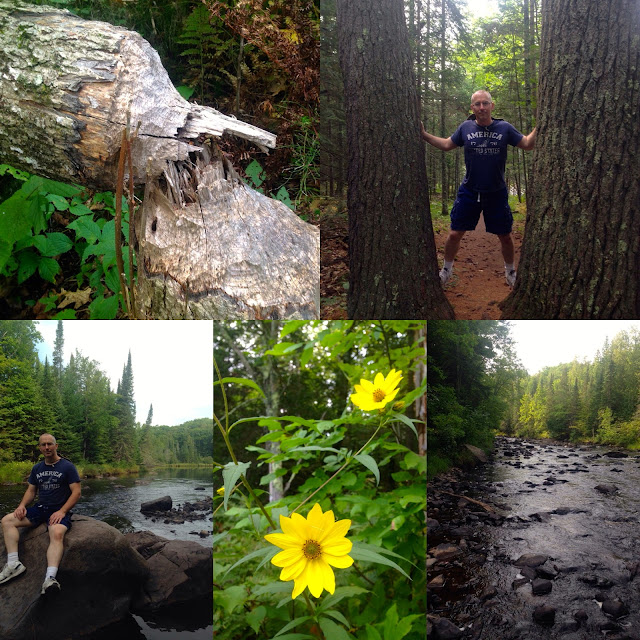 This wooden bridge that we came across looked like a scene from a post card.  Isn't it beautiful with the stone foundation, the gorgeous tree foliage, and the lovely bubbling river below? 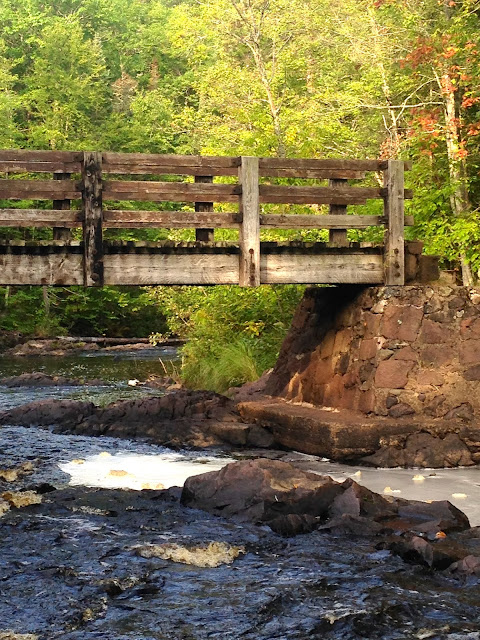 The forest was filled with beautiful birch trees, ferns, and fall blooming flowers like the perennial sunflower and Goldenrod. 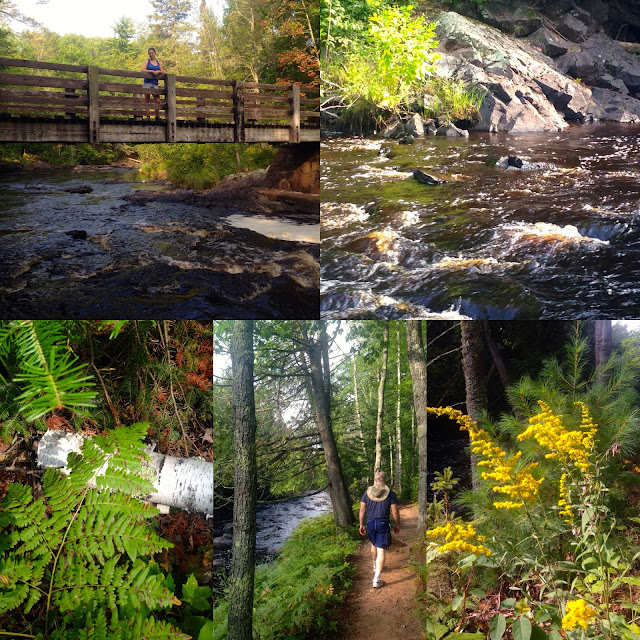 The water in this park is very brown, or rust colored (perhaps that's why it is called Black River?) due to the dark brown, igneous rock called basalt, which is a solidified remnant of ancient lava flows. 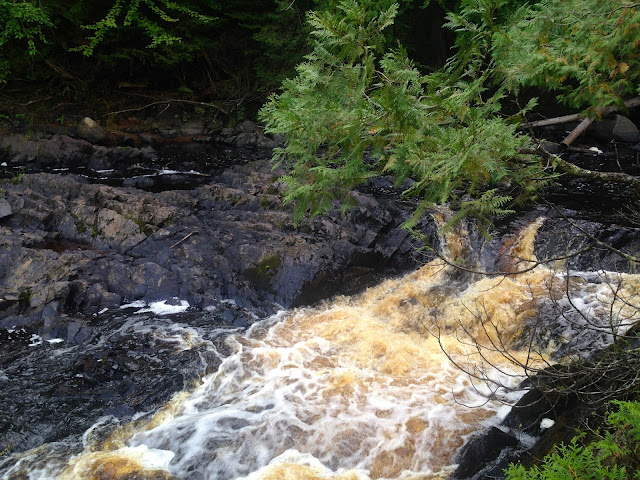 When we arrived at Little Manitou Falls we were surprised at how un-little it really was.  I was quite impressed with it actually, for I wasn't expecting twin falls, nor was I was expecting it to be thirty one feet high! 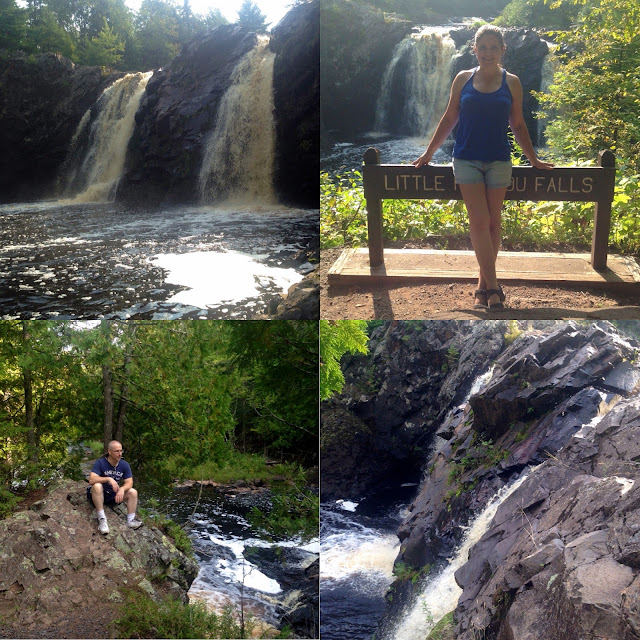 We were able to climb to the top of the waterfall too to see it cascade down the rocky edge…though I was quite nervous! 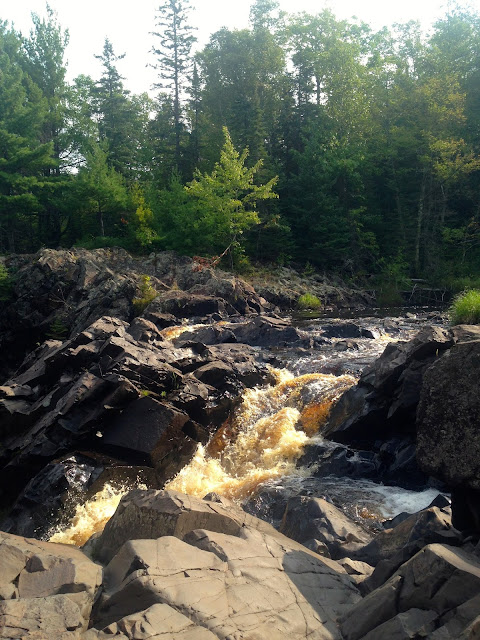 The view from the top of the falls looking down into the Black River. 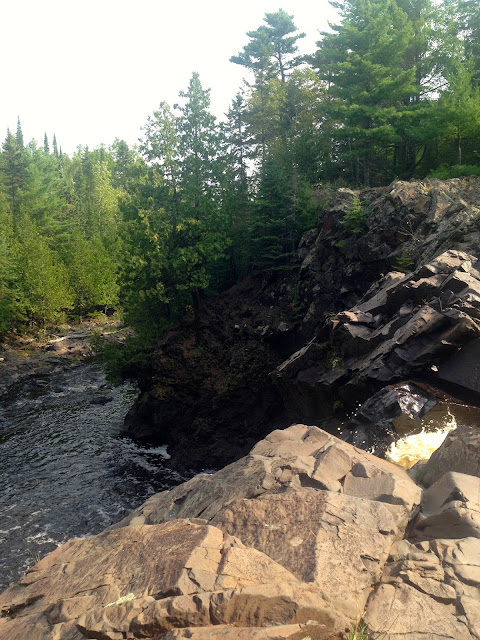 After we reached Little Manitou Falls, the path comes to a dead end.  We then had to go back the way we came to catch the trail to Big Manitou Falls:  but more on that hike and view next week!  For now, I leave you with another gorgeous sunset from our campsite. 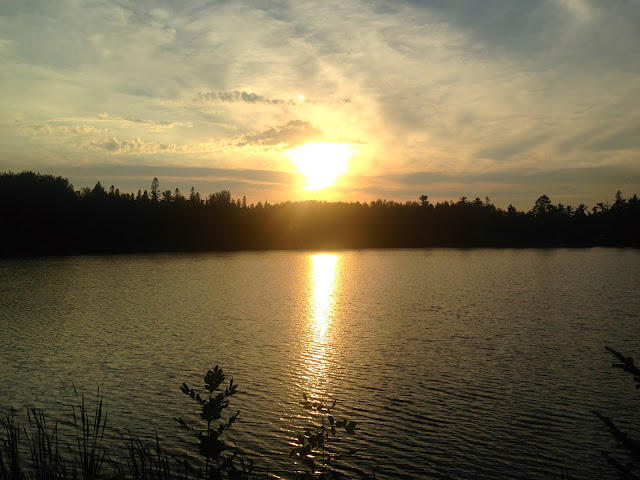 So what did I think of Camping as a Couple instead of as a family?  It is very different.  Very relaxing. Very Romantic.  I know a lot of people would ask how could camping be romantic when your all grubby, sweaty, no make up,  casual clothes, etc.  But this park had hot showers, so we were always able to get the smoke and grime off of us before bed.  It was just so peaceful being alone, out in nature, just the two of us.  We would lay in our tent at night and listen to the leaves rustle in the wind, or the thunder (it rained two nights we were there!), and watch the lightening streak across the sky.  We enjoyed every minute of camping alone together.   It was a wonderful Labor Day weekend.

Linking up with these fabulous blogs HERE.