In last week's Travel Post, I shared my experience of my husband and I camping alone for the first time.  This is a continuation of that post.  In my first post, I told you a bit about the park, setting up our campsite, and Little Manitou Falls.  Today's post is about the highlight of Pattison State Park:  Wisconsin's Highest Waterfall! 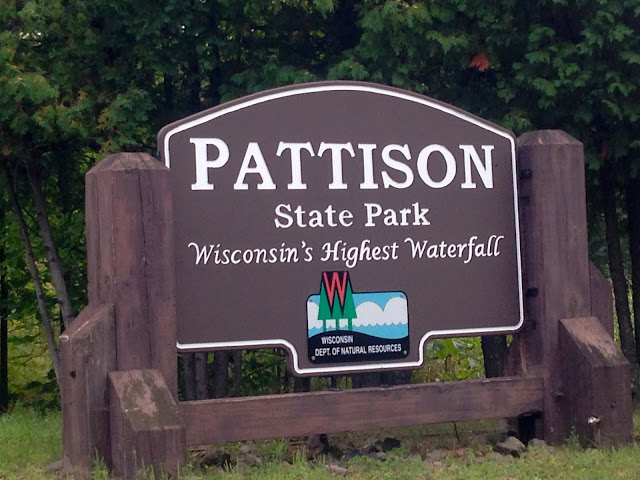 Big Manitou Falls is the highest waterfall in Wisconsin at 165 feet. 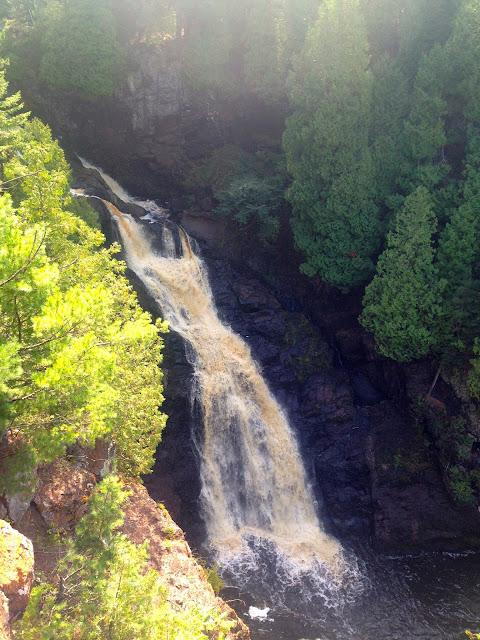 It is so easy for anyone to see Big Manitou Falls, because it is literally located right off of Hwy 35.  You don't even have to enter the state park to see it (although good luck parking your car, there are  'No Parking' signs up and down the highway, and the few parking lots available require state park stickers.)  There really isn't even a 'hike' to see it.  It is located just a few strolls away from the highway, making it easy for families with strollers, the elderly, or people with disabilities to see the attraction.

We went to see Big Manitou Falls after our hike to Little Manitou Falls, so it was about a one mile, scenic walk through the woods before we arrived there. 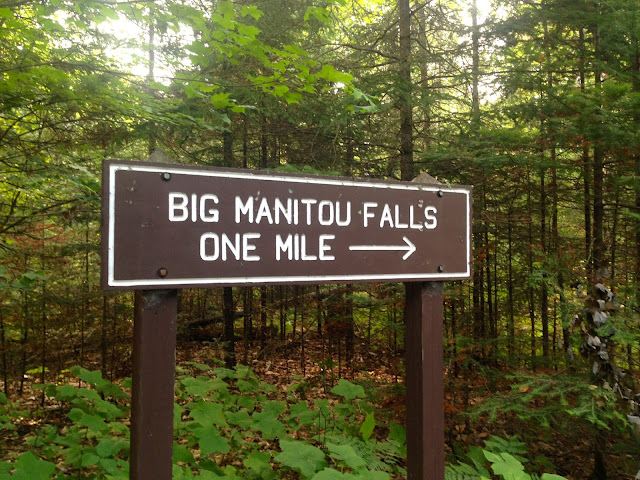 Once we cleared the woods, we saw the beautiful lake and beach and knew that after lunch we would be napping in the sun and swimming in the lake….for it was HOT! 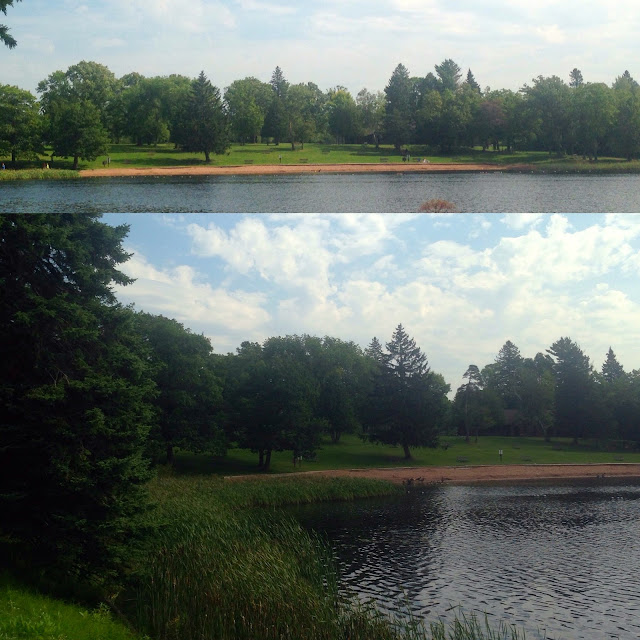 There is a pedestrian tunnel that goes under the highway to get to Big Manitou Falls, so you don't have to attempt to cross the busy highway.  Once across the street, the area opens up into a lovely "park-like atmosphere".  The paths are large and paved.  There is a gorgeous arch bridge that crosses over the river.  The scene is picture-perfect with a lovely river, babbling water, and park benches under tall pines. 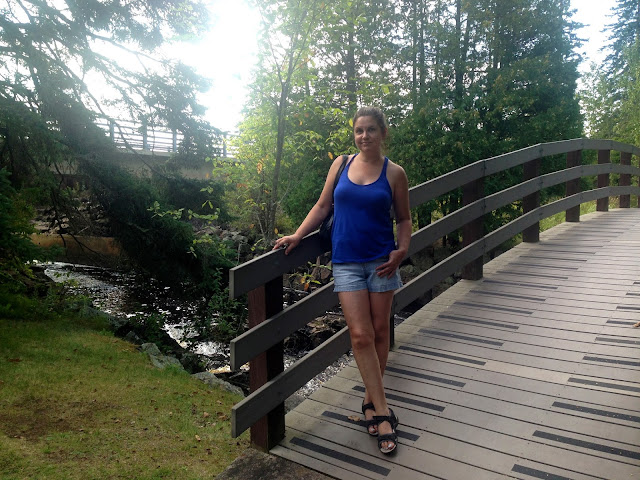 The paths split into three different directions, with no signs, but they all lead you to the same thing:  Big Manitou Falls.   The different paths just offer different views, as you can see the falls from observation towers and look outs on either side.  My only criticism of this area, is that it was slightly confusing.  We didn't know which way to go, because there were no signs, so we just walked down each and every path. 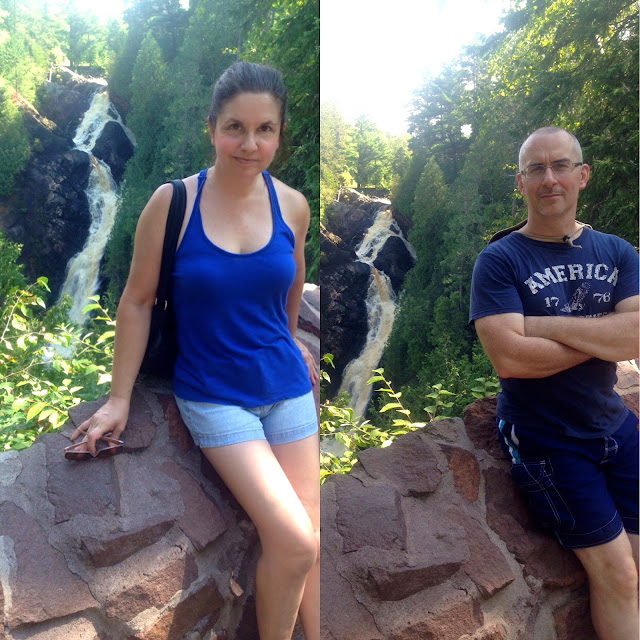 You can't climb up or down into these falls.  There is a fence barricading access to the falls off,  and "No Climbing" warning signs everywhere.   It is strictly a falls to admire from a distance, and not to play in.

The trees around the falls are very full, lush, and green.  They are obviously benefiting from the water in the falls.  But at times, they appear very overgrown, as you can't even see the river once the falsl comes to an end.  Maybe in the winter, there might be more of a view of the river and gorge as well, but in the summer the foliage blocks it.  I would love to suggest to the park that it might be time to cut some trees down, so  visitors could get a better view, but I'm sure they would balk at that idea, and I understand why.

Do you see the observation decks in the picture below?  They are in the upper left. 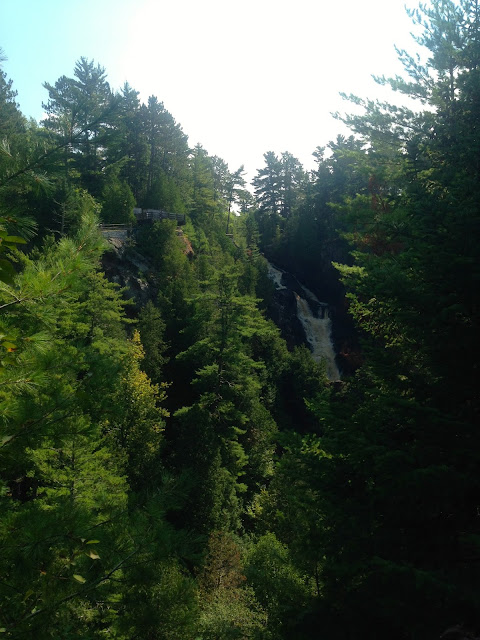 There was so much unique fungus in this area.  We found this beautiful specimen growing on a tree trunk.   Isn't that color and detail gorgeous? 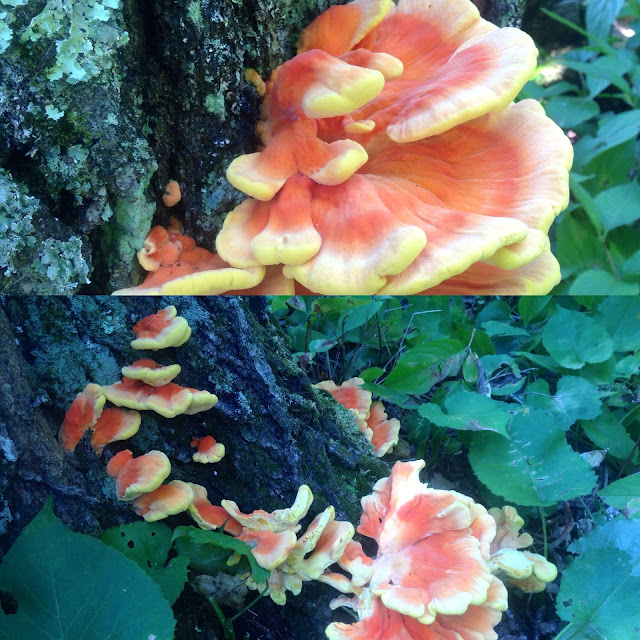 And these large mushrooms were growing right in the grass!  I love the color. 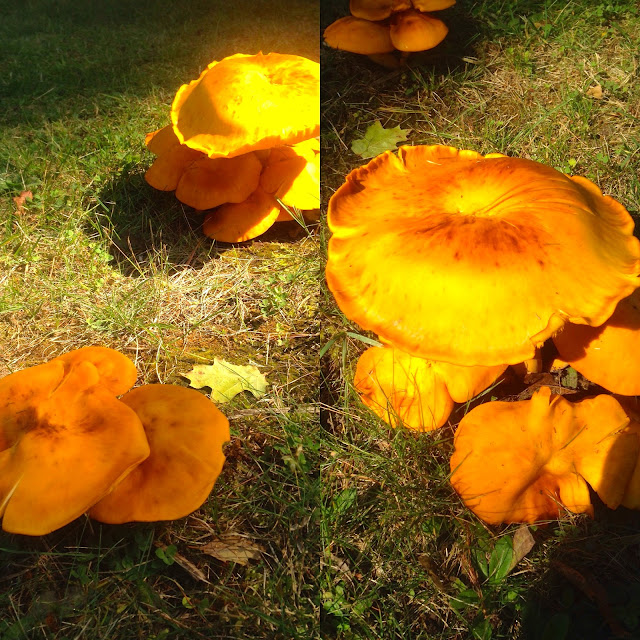 After our visit to Big Manitou Falls, we headed back to our campsite for lunch.  We didn't bother starting up a campfire, and just had apples and peanut butter, ham and cheese sandwiches, and chips.  A nice ice cold diet Pepsi really felt good after hours of hiking in the heat!  I couldn't believe how exhausted and hungry I was.  I exercise five days a week when I'm home, and spend a minimum of 45 minutes a day on the treadmill, why did this hike wear me out so much?  So I decided to put my swimming suit on and take a sunny nap on the beach.  My husband decided to gather firewood for that night's evening meal, and then join me on the beach later as his skin doesn't tolerate "laying out" as well as mine does.

So my husband and I separated for awhile.  When I first got to the beach I had a hard time finding a spot to lay down my towel where there was not geese poop.  It was everywhere!  I finally deemed it hopeless, picked a spot right in the middle of the beach, and kicked the poop out of my way before I lay my towels down.  I decided to get wet before laying out because I was so hot.  I got about thigh high into the water and then stopped.  It felt cold, but it probably wasn't.  I was just so hot.  I wanted to dip down, or go further into the water to cool myself off, but it was so brown I couldn't see anything.  It seemed clean, it was just dark from the basalt rock.  So I chickened out and went back to my towel on the beach to sunbathe until my husband arrived. 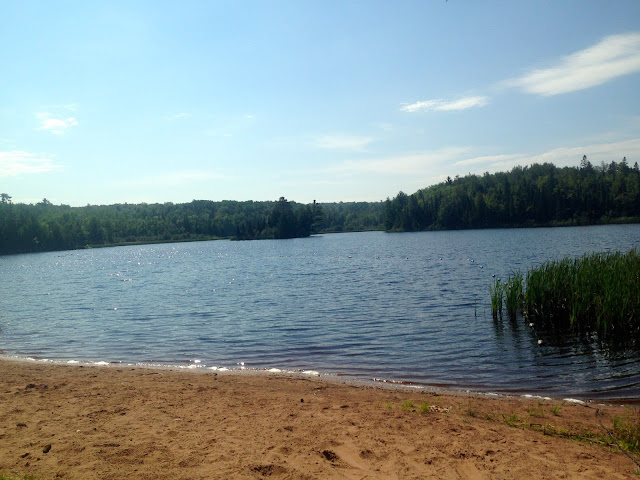 My husband arrived an hour later, and by now I was really ready to get wet.  I purposely picked a spot right in the middle of the beach, so we weren't near any cat tails.  We walked out into the water till we were about thigh high again, and this time it was my husband who didn't want to go any further.  He said "I don't like water I can't see in".  I replied I felt the same way, but he was courageous enough to at least lay back and get totally wet, where I couldn't even bear to do that.  The water just felt like ice against my hot skin.

So since neither of us felt comfortable being too deep in the dark waters, we decided to just sit in the shallow water on the water's edge.  I don't think the water was even four inches deep.  It was just enough to keep us cool and soak up some rays at the same time.  And then, little minnows started to arrive and 'peck' at our legs and toes.  At first, it was cute and funny.  But then bigger, and bigger fish started to arrive.  I started to giggle and started to move my hands continuously to keep the fish from "biting me".  My husband was trying to catch one, and told me to stop moving my hands.  I said "No, I keep feeling a large fin on my buttocks".  I laughed and giggled every time I felt the "fin", and then suddenly I thought I better stand up, that felt larger than a  "minnow".  When I stood up, I saw what at first appeared to look like a large, narrow leaf.  But then I remembered a previous lake experience I had as a teenager and knew that that was no leaf.  I screamed "Oh my gosh!  It's a LEECH!".  My husband had never seen a leech before, and said "No, it's just a leaf".  I said "No, it's a leech, they are camouflaged to look like leaves in the water!".  So he grabbed a stick and played with it in the water, and then it started to swim, and when it turned over we could see his suction pads on his underbelly.  It was so gross!  It was at least six inches long!  "Oh my goodness!  I can't believe that thing was trying to adhere to my buttocks!  Thank God I stood up to investigate!".

My husband then kicked it out of the water with the stick and threw it onto the hot sand.  Would you believe it knew instinctively which way was the water, and immediately tried to crawl back into the water? 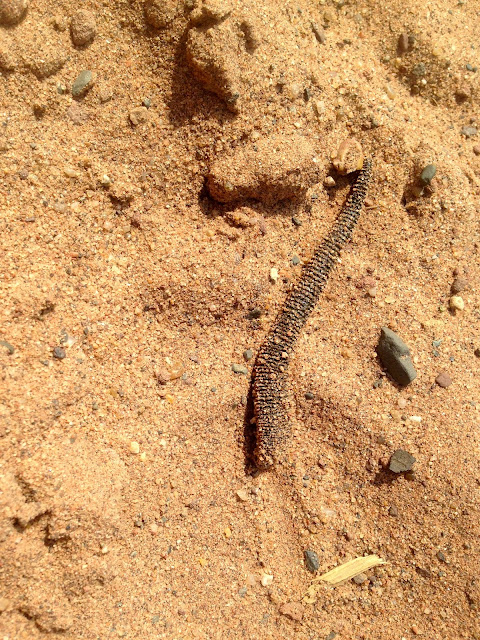 That is the leech in the sand.  I wish I could have gotten a picture of him when he was in the water, then you could really see how disgusting he was.  There were so many little kids playing on the shore edge and we didn't want this thing latching on to one of them, so my husband decided to kill it.  You wouldn't believe how indestructible this thing was.  They are like worms, you cut them up, and they still wiggle and move.  Finally, he just smashed him, and squished him, and ground him into the dirt, and hopefully, I think, he finally died.  It was so revolting.

Well, needless to say, that experience cut our beach outing short.  Neither one of us had any desire whatsoever to go back into the water.  Then we both started worrying if any other creatures decided to make our bodies 'home' if you know what I mean. So off to the bathrooms we went to disrobe and check each other out.  Ugh, I just couldn't get rid of that 'creepy' feeling for hours, if not days.   I said to my husband, "Out of all the people in the water, that leech had to choose me to latch onto!  That's why I picked the middle of the beach, it was away from the reeds and cat tails! I thought there would be less chance of anything creepy in the water.  Boy was I wrong".  There were so many little children playing right near the cat tails that I thought of warning the moms about the leech, but my husband said it was probably a one in a million chance that we saw one, and I guess I agreed.  I've been in Wisconsin lakes all my life, and that was only the second time I saw one.  I did text the picture and story to my kids in Florida and jokingly said "And your father is afraid of swimming in the ocean….look what we found in a Wisconsin lake today!"  They had a good laugh at that!

Have a great, leech-less day!  Amy