What I ate While Vacationing in Florida

One of my favorite things about vacations is the food.  I love to find out what the local cuisine is of the place I'm visiting.  I also like to discover the popular restaurants.  I'm not one to worry about gaining weight while on vacations, because I want to enjoy my vacation, and to me, good food is a huge part of that enjoyment!

My first full day in Florida was a very relaxing one.
My daughter and I went to a local park (see that travel post HERE if you missed it) to take some pictures and enjoy the beautiful afternoon, then we stopped at Trader Joe's after wards to pick up some groceries.  While there, I noticed a Shake Shack across the parking lot and thought a nice shake sounded pretty good.  I have never heard of this restaurant before and wanted to check it out.  I was surprised to discover that their ice cream products were actually custard, because to my knowledge, that's more of a Midwest thing and I've never seen custard down south before.  And for those of you who think custard is a pudding, which is probably most of you, the custard I'm talking about is actually a form of ice cream.  Custard has all the ingredients of ice cream, but a higher percentage of butterfat and pasteurized egg yolk.   People who aren't use to it, usually don't like it because they find it's too sweet.   But we Wisconsinites grew up on custard and love it (especially if your from Milwaukee, as I am.  Leon's and Kopps custard stands are famous!),  so I was elated to find custard in Florida!

I ended up ordering a salted carmel vanilla malt and it was delicious.  I can't even begin to tell you how wonderful I felt drinking this delicious malt while sitting in the sun staring at this beautiful lake view!  The Shake Shack lived up to all my custard expectations even though it was very, very far from my home roots of Milwaukee.  They sold real food there too...but all I had was the shake so I can't tell you about anything else. 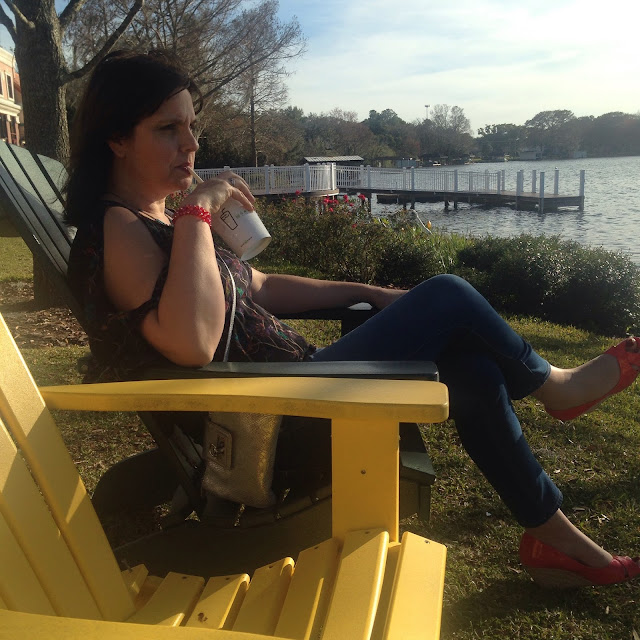 We actually went out to eat very little in the two weeks I was there.  We always had breakfast at home, and either took fruit, veggies,  and chips to snack on during the day or stopped at a fast food place for lunch.  We came home for dinner almost every night.

My daughter is very health conscious, so she did all the cooking.  She made cauliflower crust pizza for me one night.  I have heard of cauliflower crust pizza before but never tried it.  Ashley accidentally put too much olive oil in her mix, so the crust came out on the mushy side, but other than that, it was delicious.  If it wasn't for all the work involved to make it, I could see myself eating this type of pizza a lot.  But I'm just too lazy to make my own crust. 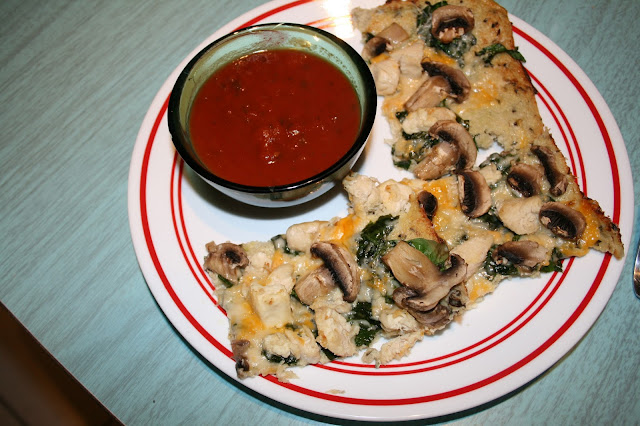 I asked Ashley for a recipe, but she's a "fly by the seat of her pants" type of cook and doesn't really follow recipes.  But no worries, there are zillions of cauliflower pizza crust recipes on Pinterest. 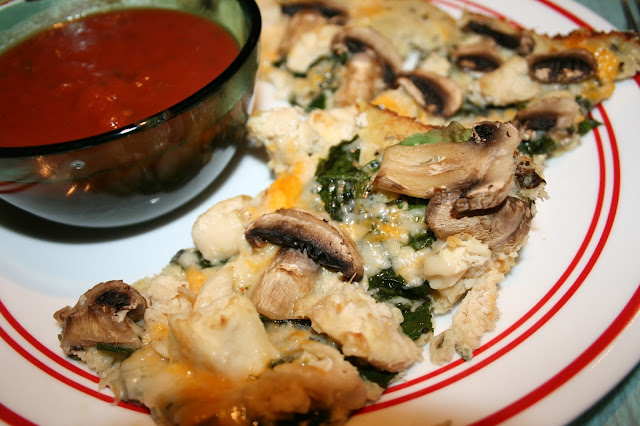 Another pizza recipe that Ashley introduced me to was Eggplant Pizza.  And this is a super, quick and easy recipe that I don't mind making myself.  In fact,  I've made it once already since I've been home using THIS RECIPE. 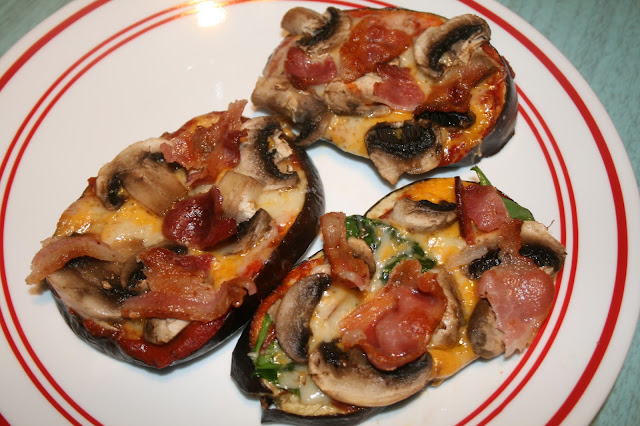 It's so easy to make!  Just slice the eggplant and roast for about 20 minutes then add your favorite toppings and bake till the cheese is melted.  Ashley's eggplant pizzas were so delicious.  When I made them, I had issues with the skin.  I was able to eat the skin on Ashley's pizzas, but not mine.  It was too tough, so I had to peel it off which was a little difficult once everything was cooked.  I don't know if the skin on my eggplant was just too tough to begin with or if I did something wrong.  Does anyone else have experience with this that could offer some advice? 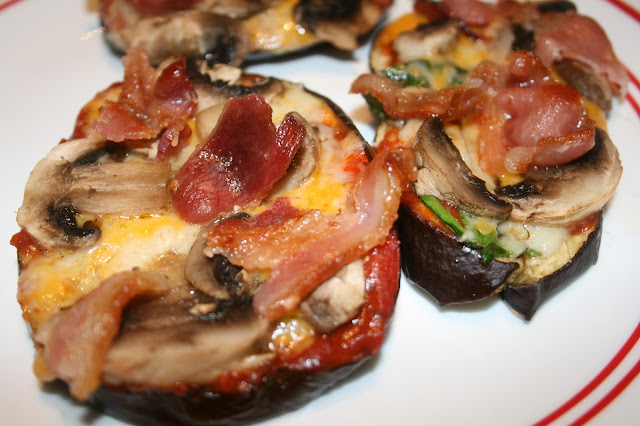 I'm not much of a sweets eater (other than dark chocolate and ice cream/custard!), but I absolutely love this french bakery in downtown Winter Park.  You may remember me mentioning it before in THIS POST,  when my husband and I shared a long, powdery, flaky pastry.  This time I tried this chocolate pastry.  Oh, my goodness, was this delicious!  It looks super sweet, but it's not.  It was very fresh and light.  And like the first pastry I tried at this shop, it was very flaky and soft.

If your ever in Winter Park, Florida be sure to stop at Croissant Gourmet!  You won't regret it! 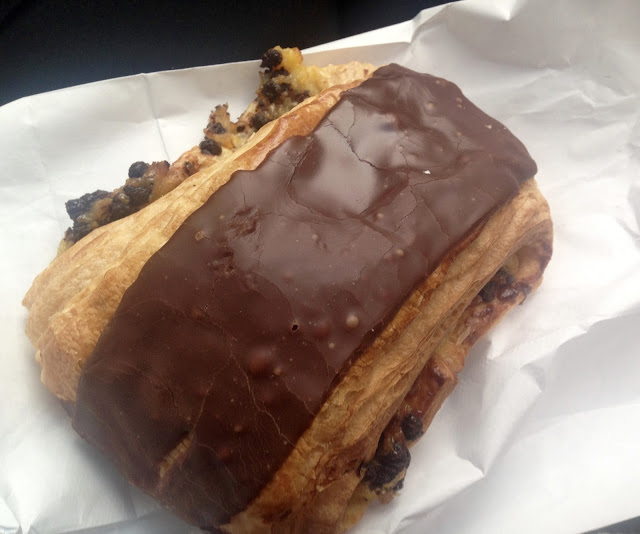 When I arrived home in Wisconsin my husband was asking me all about my trip and one of his questions was "What was your favorite meal?".  I had to really think about that one, because we hadn't gone out to eat all that much.  But then I remembered, my absolute favorite meal was at Islands of Adventure in Hogsmeade Village.  I don't want to share too much of my time there in this post, for I will tell you all about my Harry Potter adventure in a future travel post, but this was hands down the best meal I had during my two week vacation in Florida.

Hogsmeade  Village is a replica of the village in the Harry Potter movies.  In this village they have a cafe called Three Broomsticks.  It is a rustic tavern where visitors can dine on hearty fare like fish and chips, shepherds pie, and roasted chicken.  They also serve Butter Beer (the wizard version of beer in the movie, except it's non-alcoholic ).  I have no idea what's in it, but it's absolutely delicious!  My daughter thought it tasted like a cream soda with a rum flavor.  I don't know about that, but whatever it's made of they need to bottle it up and sell it worldwide cause it's that good!  All day long there were long lines of people waiting to drink this stuff and it costs over $6.00 a cup!

Anyway, back to the food.  In addition to my Butter Beer, I ordered roasted chicken.  For only $11.99 I got an entire chicken leg (leg, wing, drumstick, thigh), roasted red potatoes, and a cob of corn.  Everything was seasoned and cooked to absolute perfection.  My only complaint was that it was too much food.  If my husband were with me, we could have easily split a plate.  It was very difficult for me to even finish it, but I did, because I had no idea when I would eat again that day.  (I actually ended up not eating again that day because I was still so full from this one meal).

Ashley, Jason, and I were just stunned at the quality and amount of food we got AT A THEME PARK RESTAURANT for so little money.  It was less money than you would pay at a normal restaurant for this type of food.  And the environment of the restaurant was such an extra special touch.  It was so fun eating next to a giant fireplace in a restaurant decked out with all things Harry Potter! 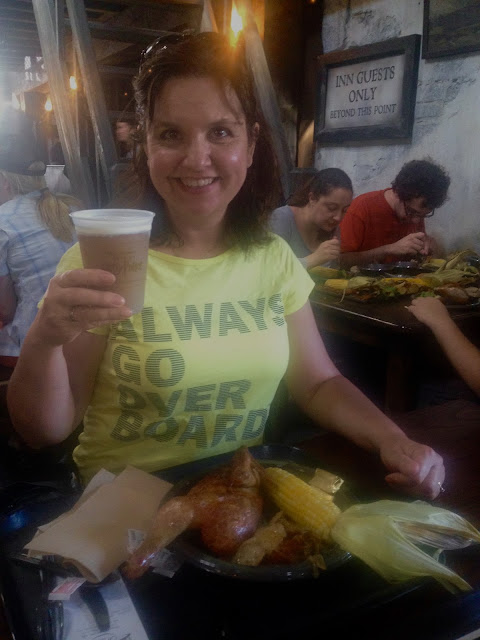 Another fun themed place I visited was in Cocoa Beach, Florida called "I Dream of Yogurt".  This area really capitalizes on the old "I Dream of Jeannie" television show, because it was here where the young handsome astronaut found his beautiful Jeannie in a bottle!

This yogurt shop had such cute decor in addition to great yogurt!  You build your own yogurt dessert in this place.  Just grab a cup, fill with yogurt, and add your own toppings.  But be careful, you pay by how much it weighs!  Mine ended up costing over $7.00 by the time I was done! 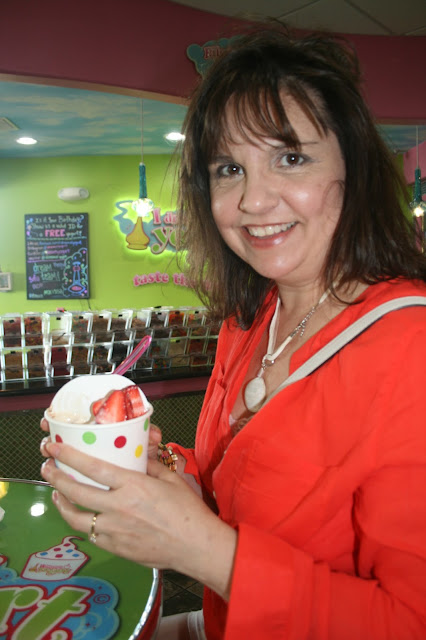 Even though we don't have any yogurt shops like this in Wisconsin, yogurt shops similar to this are all over the United States.  Tennessee especially is filled with them, so I was already familiar with how they worked from my other travels.

This yogurt shop however had something I hadn't seen before:  paper dividers for your cups!  You simply insert your divider into your cup to keep all your delicious flavors separated.  I love it! 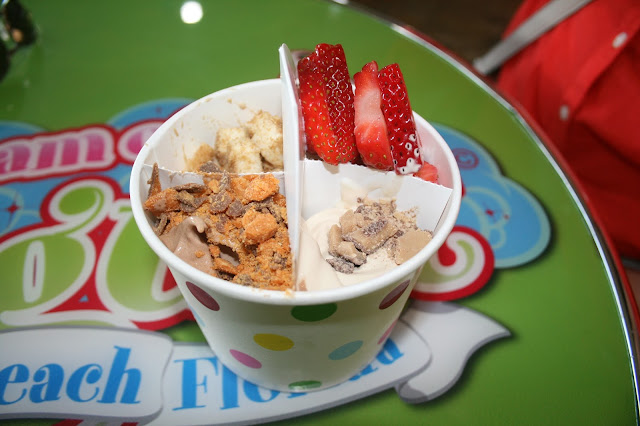 Even though we ate at home most of the time, my kids had lots of restaurant gift cards they received for Christmas for teaching.  So we did go out to eat twice, courtesy of the giver of the gift cards!  We went to an Italian restaurant called Carrabba's Italian Grill and Outback Steakhouse.

Unfortunately, I forgot to photograph my Carrabba's meal, but I did remember to take pictures of our Outback meal.

We had $75.00 in gift cards to use up, so we ordered an appetizer and everyone got exactly what they wanted!

The appetizer is called "Crab and Avocado Stack", and it was delicious.  I don't know if I would normally order it if I didn't have a gift card as I found it pretty pricey ($10.29) for such a small portion, but it was delicious.  As it's name implies, it's a stack of marinated  crab meat with avocado and minced tomato basil, covered with a drizzle of wasabi vinaigrette. 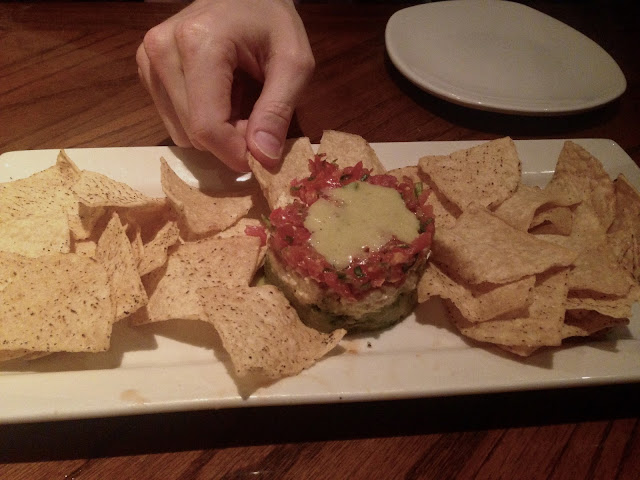 For entrees, Ashley and Jason both ordered Prime Rib and I ordered a Ribeye with garlic mashed potatoes.  I enjoyed my steak immensely, and even though Ashley and Jason liked their prime rib, they said the prime rib I make every Christmas is much better.  I asked them if they were being kind or if they were  serious, and they insisted they were being serious.  I don't normally make my prime rib as rare as theirs was served, so I'm thinking that's probably the reason why.  They ended up taking most of it home, and frying it up on the stove....then I think they liked it more! 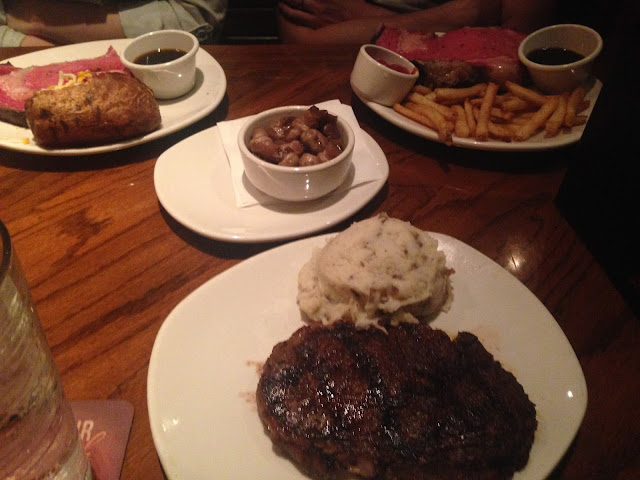 My ribeye was yummy, but I think I like the steaks my husband and I cooked on our last camping trip over an open fire better!  You can read about that fun time HERE if you missed it! 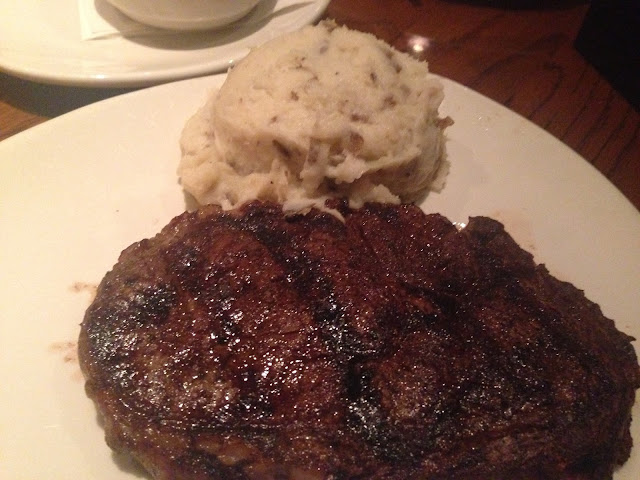 See how rare their prime rib is?  I know prime rib is suppose to be rare, but this is a bit ridiculous! 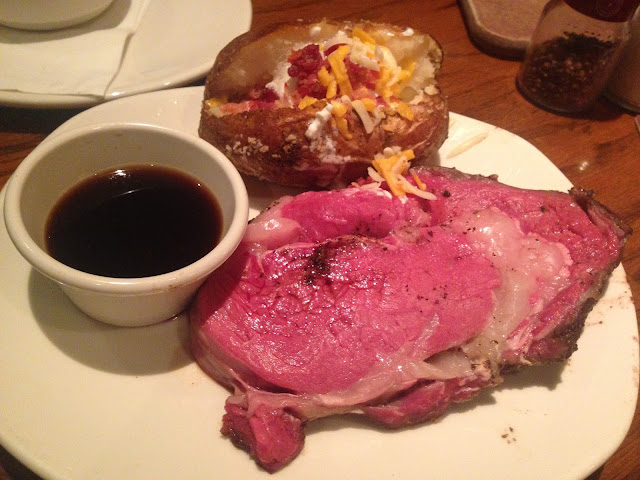 So what about you?  Do you love to try all the local food and restaurants when your on vacation, or do you stick to your usual diet program?  What have been some of the best restaurants or meals you enjoyed?  I'd love to hear from you!