If you read my fashion post on Friday, you would know my husband and I took yet another fall hike.  Most of the color is past peak in our area, and there are already too many barren trees.  Oh, fall is such a short, short, season.

This was a short hike that we actually tried the weekend before on our way home from Minneapolis, but it was disastrous!  We were driving home and saw people walking high on a bluff above the highway and my husband said "Hey, you want to go up there?"  I said "Sure, why not?".  After driving around in circles for quite a bit trying to figure out where to enter at the base of the bluff, we gave up and pulled into a parking lot.  There I brought it up on my GPS, and we eventually found the place, but it wasn't easy.  They should have signs for this famous bluff on the main highways or major roads, but they don't.  The signs do not appear until you hit the side streets.  Once we found the place we encountered another major obstacle.  No trail maps or descriptions of the trails.  There are signs with names of trails and arrows pointing in the direction of that trail, but that's it.  So we asked some other hikers, and decided on the Midland Trail.  After hiking on this trail a bit, my hubby saw a unmarked trail going straight up.  So he insisted we take this short cut.  Big mistake.  It was literally straight up and very dangerous.  When we finally made it to the top, there was a sign with a fence blocking the trail saying it was closed because it was "too dangerous".  Ha!  Kinda needed that sign at the other end too morons!  Anyway, now we were lost.  So we found some rock climbers and asked them how to get to the trail that takes you up to the top.  They said they didn't know because they never got up to the top that way, they just climbed rocks!  But they did point us back to the trail again, which we followed, and it took us right back again where we started, where, we also found more hikers, who were lost, and had no idea which way to go.

By now, we were frustrated, hot, and tired.  My husband didn't have appropriate footwear on so he just wanted to call it quits.  I was disappointed, but agreed.  We were only a little more than an hour away from home, so we could come back,  but I was worried one week later would mean a lot less color.  Nevertheless, we headed back down the bluff and to our car.

When I got home I looked up Barn Bluff on Trip Advisor and discovered we weren't the only ones with these issues.  Almost every review I read said that the place was hard to find, they got lost on the trails, and/or they wish a trail map was provided.  So Red Wing Officials....if your reading this, get your act together and provide trail maps, trail descriptions, and better signs from the main road leading to the bluff.

Now that I got that off my chest, here is our second experience with Barn Bluff once we were better clothed and educated thanks to the travelers on Trip Advisor.  By reading the reviews, I knew exactly which trail to go on this time...the South Trail, and we had no issues whatsoever. 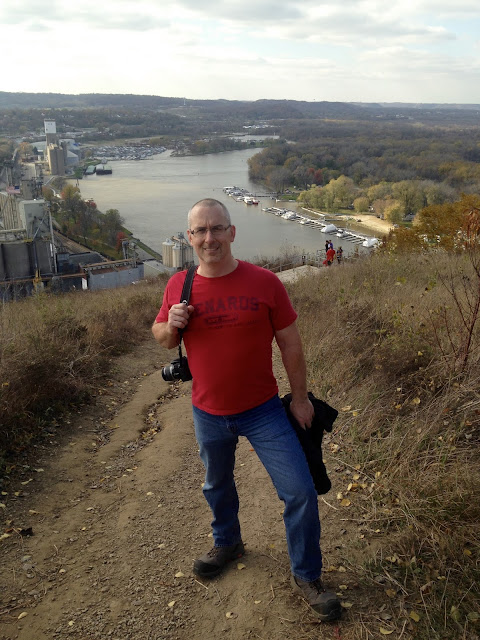 The South Trail is a short, easy/moderate trail to a gorgeous scenic overlook of Red Wing.  The trail one way is only .83 miles, but, it is quite steep at times. 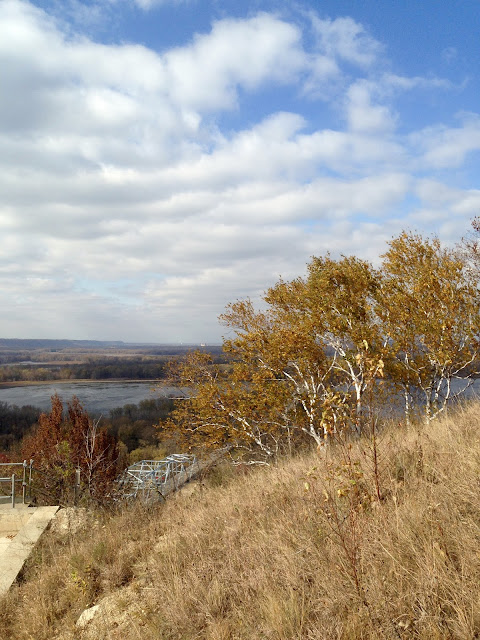 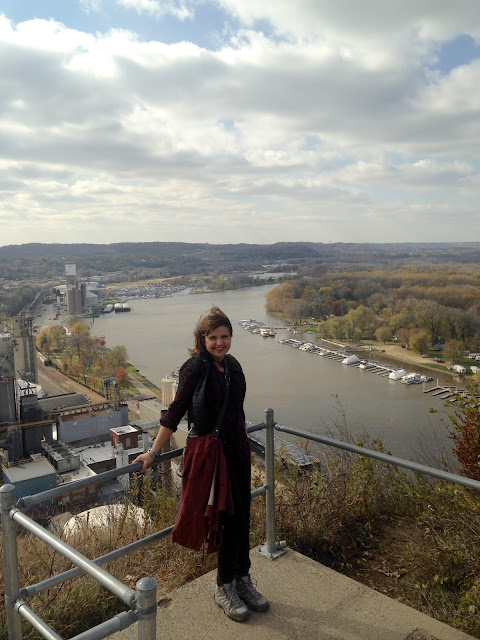 The trail is mostly a worn path.  You walk through the woods at times, but then other times your walking in open prairie land like this. 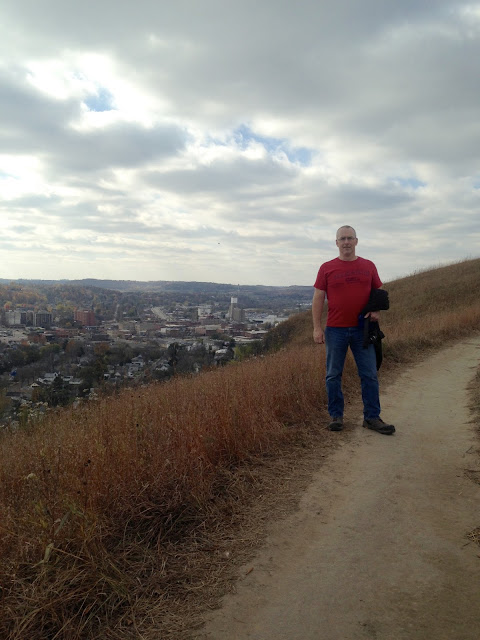 Even though most of the leaves have fallen by now, there was still some color left to enjoy. 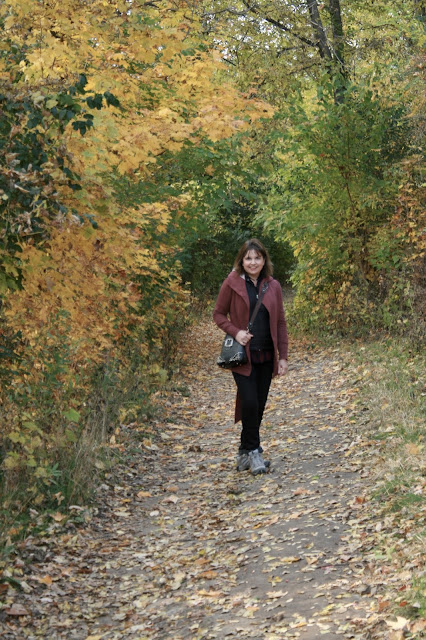 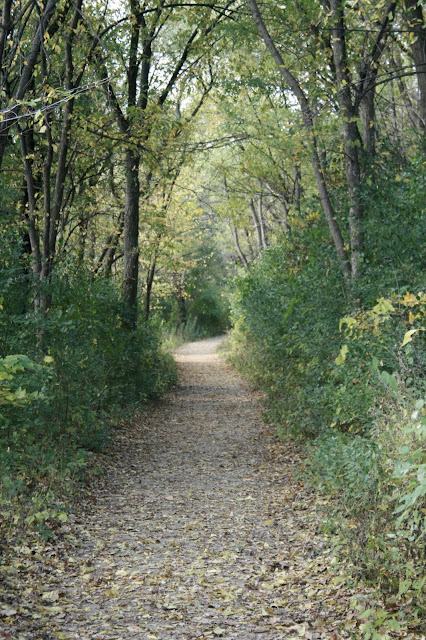 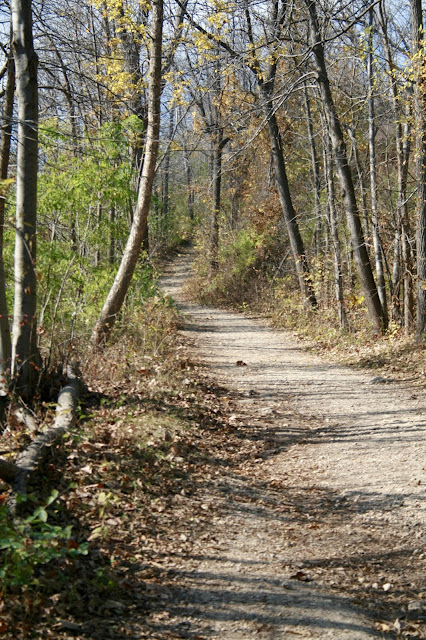 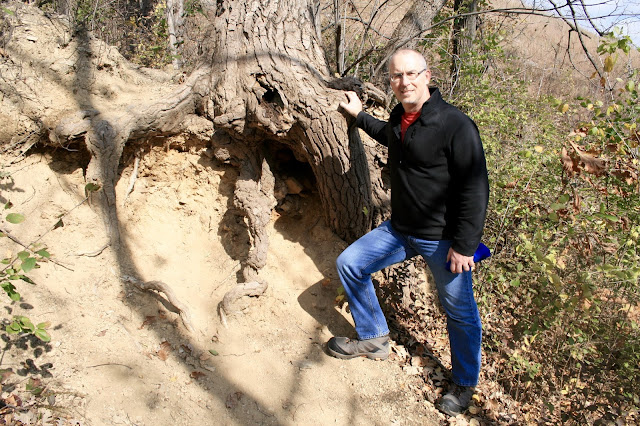 At the top of the west bluff is a large American flag that can be seen from the town below. 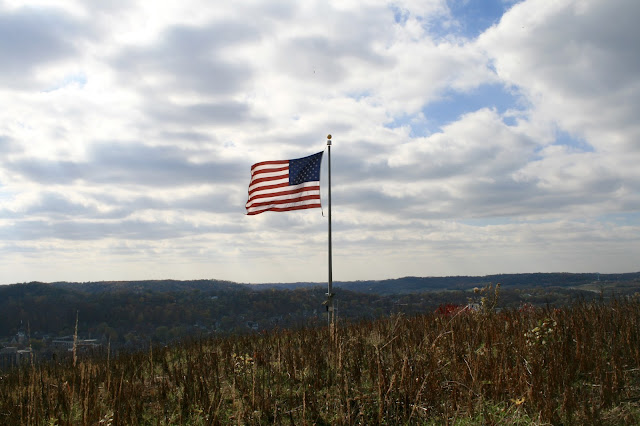 The wind was so cold and fierce at the top of this bluff, but I didn't mind at all as I was quite hot and exhausted from the steep climb up. 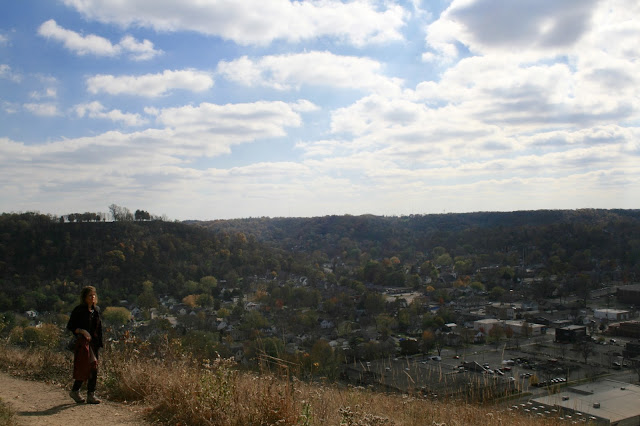 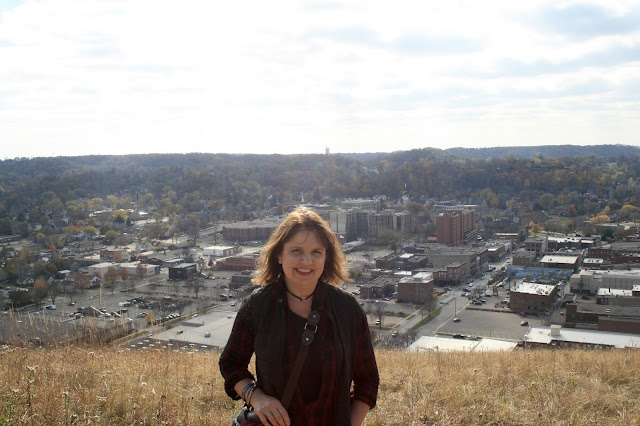 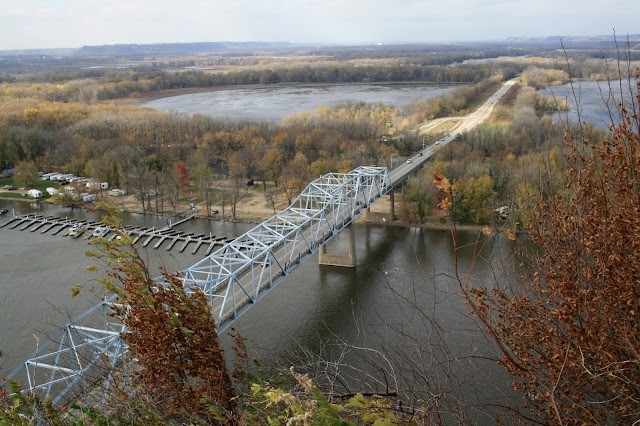 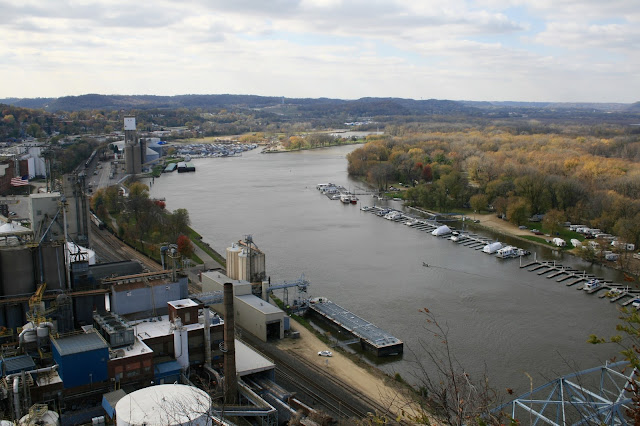 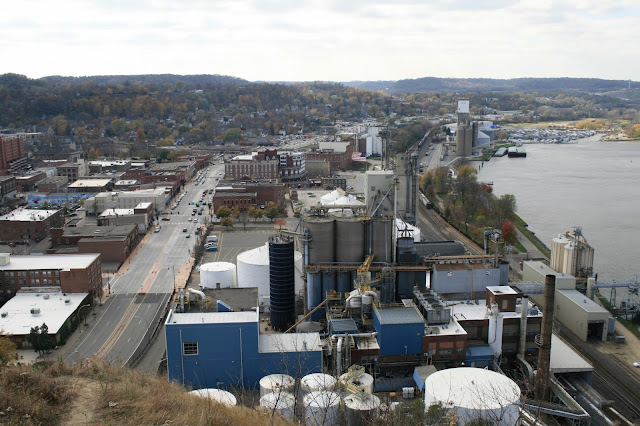 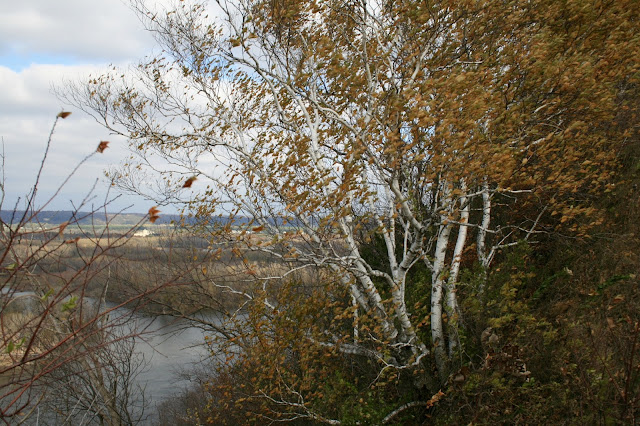 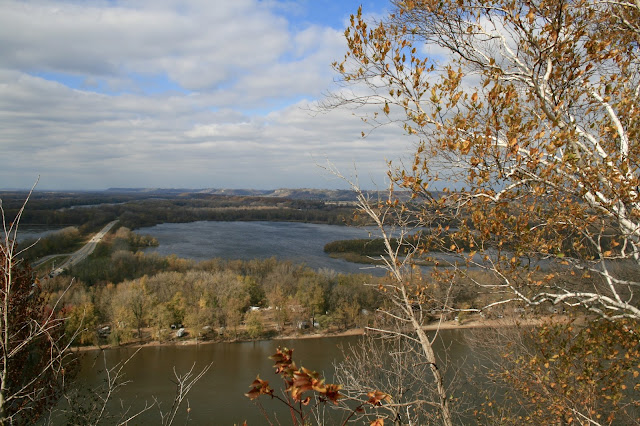 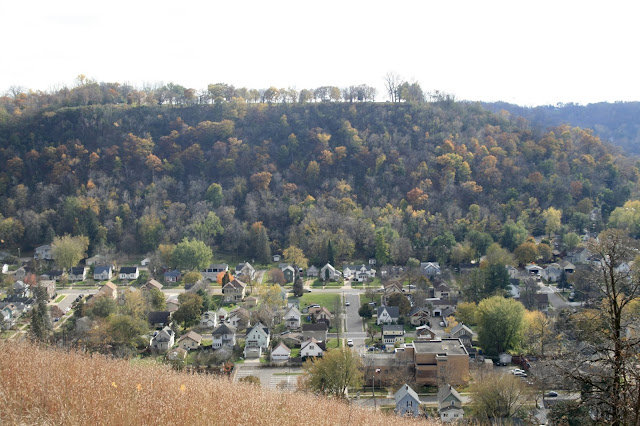 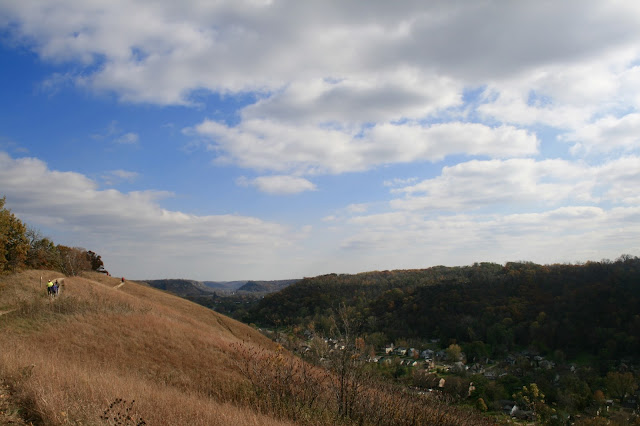 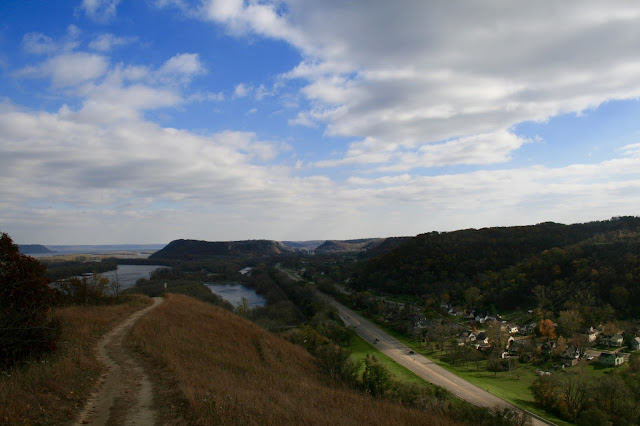 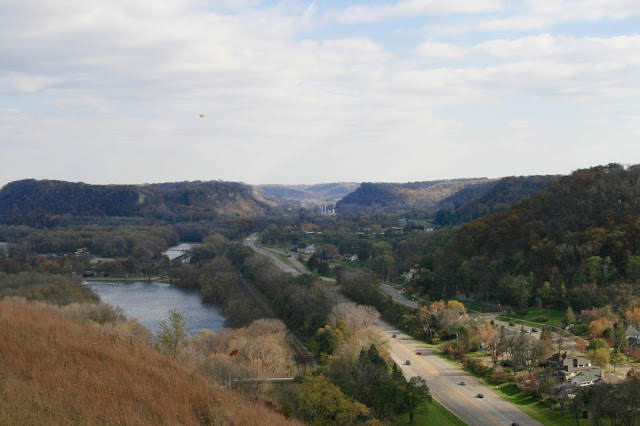 This overlook had more natural views than the West Overlook as there was a lot more water and bluffs instead of a city view. 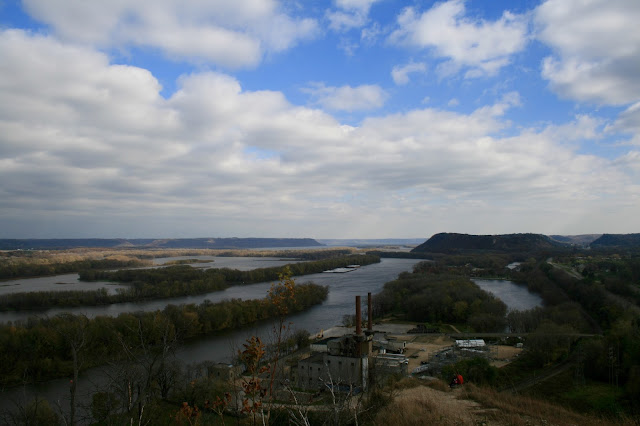 There are two long staircases to climb to get to the top of the bluff.  This is one of them.  They were put there by the Kiwanis and each step has a name of a Kiwanis member who bought a step to help pay for the stairway. 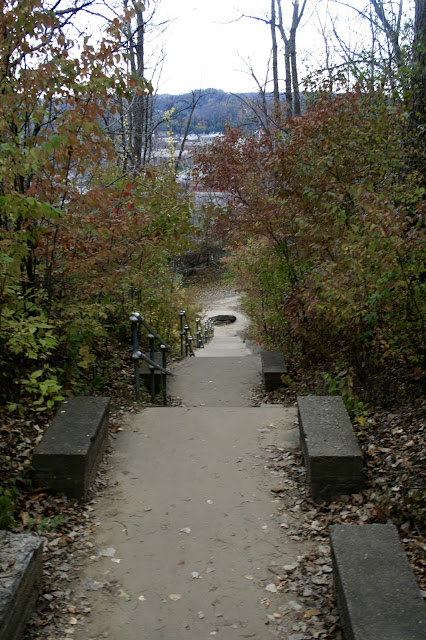 Coming down off a bluff or mountain is always so much easier and faster than going up! 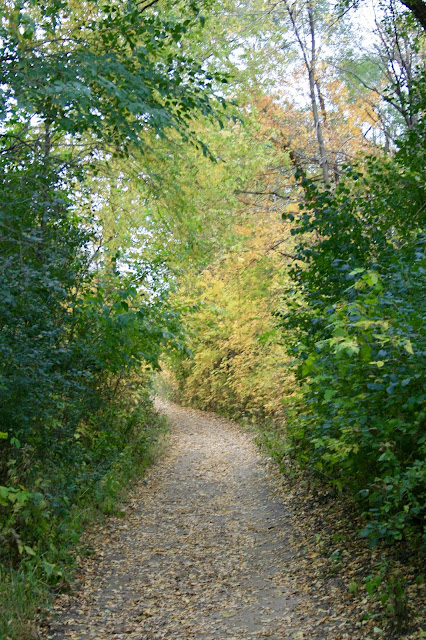 I'm so happy we decided to go back to Red Wing and try this hike again.   It was such a beautiful and special day!  We even saw another bluff to hike while we were there, I wanted to do that one right away and my husband said "Let's save that for next time!".  Good idea, now I'll have time to research it first so we don't get lost! 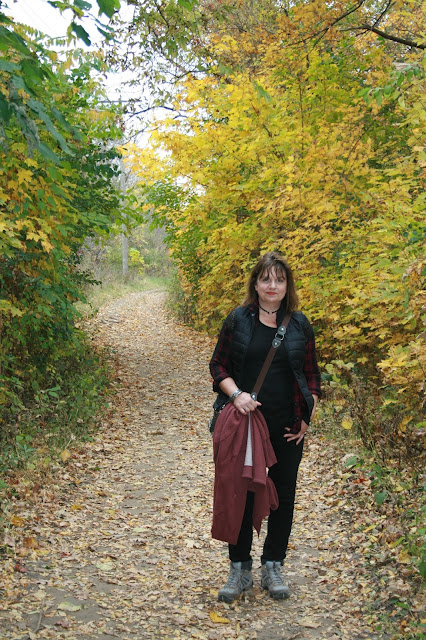