This post is part of a series of travel posts about our May vacation to Colorado.
Day four was filled with so much adventure I had to divide it into three posts.  Today is Part Three.  If you missed Part One and Two, start HERE.  If you need to start from the very beginning, go HERE.

In my first post of Day Four of our Colorado Adventure, I mentioned that we were planning on visiting a glacier that day.  Well, that didn't turn out as planned.  You see, I always use Hotels.com when planning vacations.  I searched for a hotel around St. Marys Glacier and discovered most of them were pretty pricey.  Then I discovered Ameristar and couldn't believe what a beautiful hotel it was and for such a great price.  So I booked it before actually checking the TIME distance from the hotel to the glacier.  On the map, the hotel looked very close to the glacier.  But in reality it was over an hour away (actually two hours away since we were coming from Ft. Collins) because there was a mountain in the way.

We didn't want to drive that far to see a glacier, plus, we actually had enough snow and ice from our experience in Rocky Mountain National Park, that we decided to just head to our hotel and see what there was to do in the area.  On our way there, we stopped at the sweet city of Golden, Colorado and Look Out Mountain.  After those two detours, it was early afternoon by the time we got back into our car and we began the scenic drive to Black Hawk, Colorado.

There were many oohs, and ahhs all the way there, for it was quite the amazing drive.  The road is nestled in on both sides by steep rocky cliffs, that winds and twists in scenic wonders.  We wanted to drive slow so that we could savor every moment.  However, the rest of the traffic wanted to drive fast and was not very patient with out touristy driving. 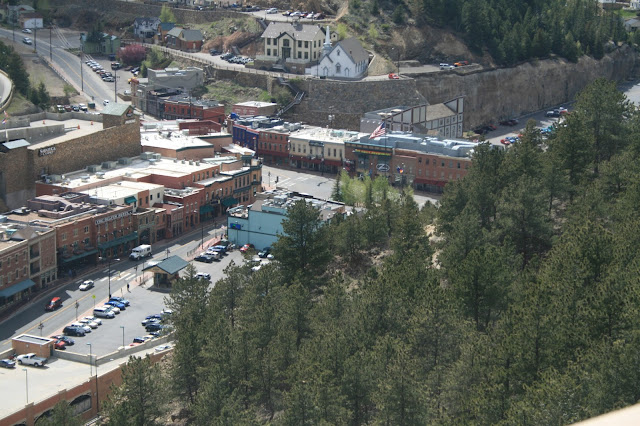 The top and bottom pictures are views of the town of Black Hawk from the roof of our hotel. 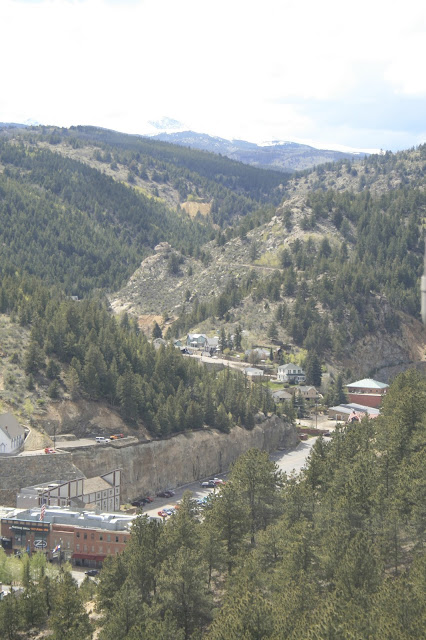 Black Hawk is a historic mining settlement founded in 1859 during the Pike's Peak Gold Rush.  It is located along the north fork of Clear Creek and Gregory Gulch.   The area flourished during the mining boom, but declined, and even became a ghost town in the 20th Century.  But after the 1991 establishment of Casino Gambling, the town was revived.  Over 900 million dollars have been invested in land, casinos, and related development.  Today, this tiny, picturesque town generates over 84% of Colorado's Gaming Revenue and contributes 88 million annually in taxes to the state of Colorado for tourism, historical preservation, and higher education (source:  city of Black Hawk history) 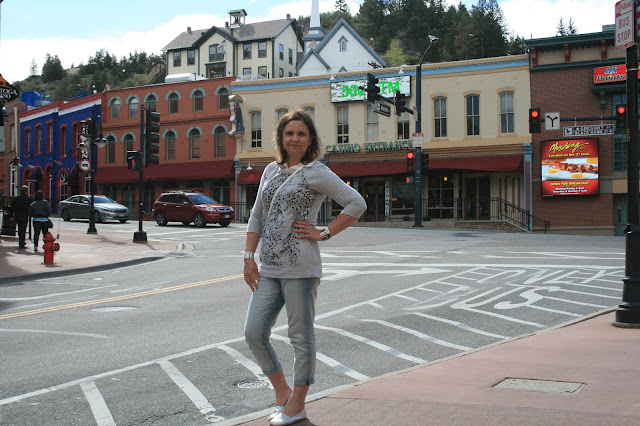 Now, my husband and I are not gamblers.  We don't play cards, and have absolutely no idea how to even play a game of solitaire.  So what we were we going to do in a gambling town?  Well, the first thing we did was get out and take a walk and soak in the beauty!  The restoration of all the old, original buildings were amazing.  Most buildings, like the old train depot, hotel, and carriage house, were turned into casinos.  However, there were quite a few buildings and homes that seemed vacant…like no one was using or living in them.  But their facade's were given a fresh coat of paint and they were quite attractive and well-maintained. 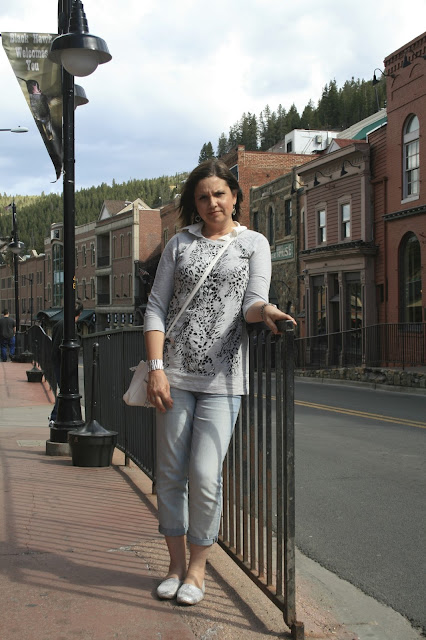 I'm sure some of you might wonder if this is a family-friendly town.  I will admit, I did see a few questionable characters, but I never once worried about our safety.  The gambling crowd seemed far more interested in their 'game' than they did in me.  But we were also only outside during daylight hours, and stayed inside our hotel after dark.  We felt our hotel was very family-friendly.  Even though it was a casino, small children were eating with their parents inside the casino restaurants, and we saw many families checking into the hotel when we did. 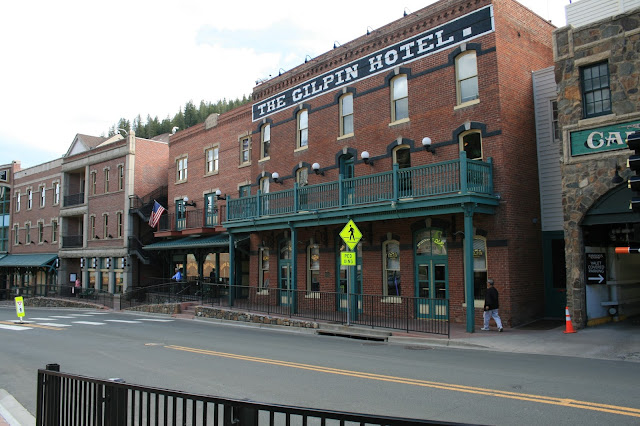 Only 118 people claim Black Hawk as their home, making it the least populous city in Colorado.  The employees who work here most likely take one of the numerous buses from Denver or Boulder, or the same scenic drive we did.  Perhaps that was why all the drivers were in such a hurry? 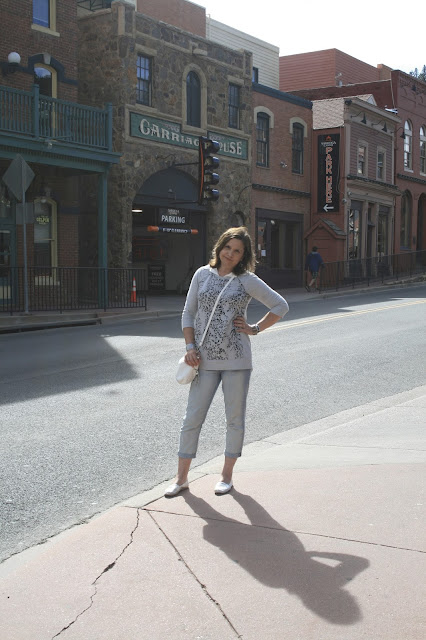 The city is so CLEAN!  Everything feels fresh and new, even the buildings that are hundreds of years old.  They do an excellent job of keeping everything well maintained, and we also saw a lot of new construction going on too. 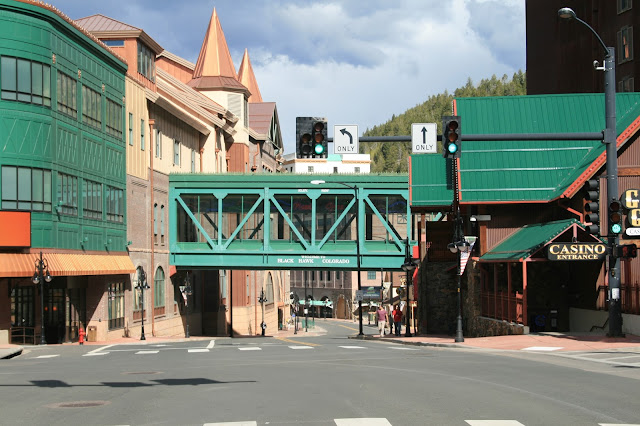 There were several sky walks connecting one casino to another so if you were in winter you would  never have to step outside if you didn't want too. 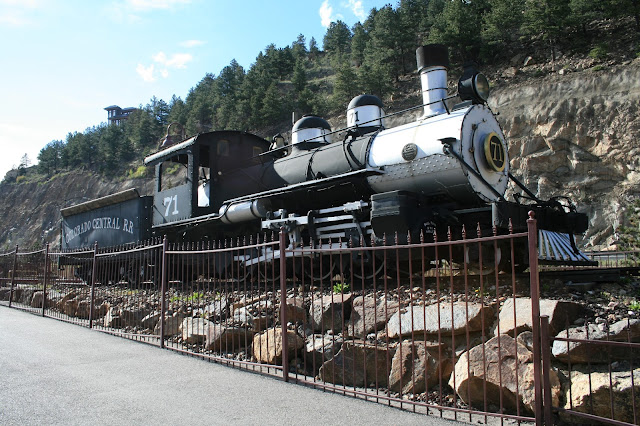 In addition to it's rich mining history, Black Hawk is also know for the Colorado and Central Railway being laid through the mountains and into Black Hawk.  This old train is on display as a memorial to that time period. 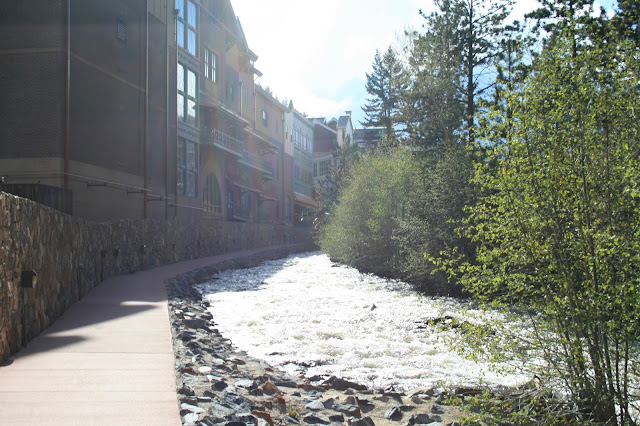 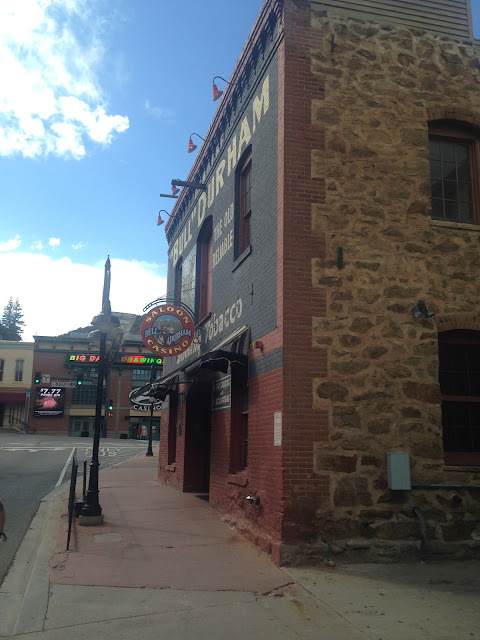 As much as I loved the mix of old and new in Black Hawk, this city is not without controversy.   There are many people who wish Black Hawk and it's sister city Central City, would have been left ghost towns.  They feel that the development has destroyed the towns history.   I understand where they are coming from, but I don't feel that way at all.  I love historic buildings.  I live in a house that is over one hundred years old myself!  It would be one thing if the developers leveled the town and destroyed all the old buildings to dust, but they didn't.  They restored them, and added beautiful new buildings to bring life back into a dead town.  If you've ever been to New York City you would see gorgeous old, historic buildings, standing on the same street as modern skyscrapers.  It is the same with Black Hawk.  In my opinion, they did an excellent job preserving the town's past, and giving it a future at the same time. 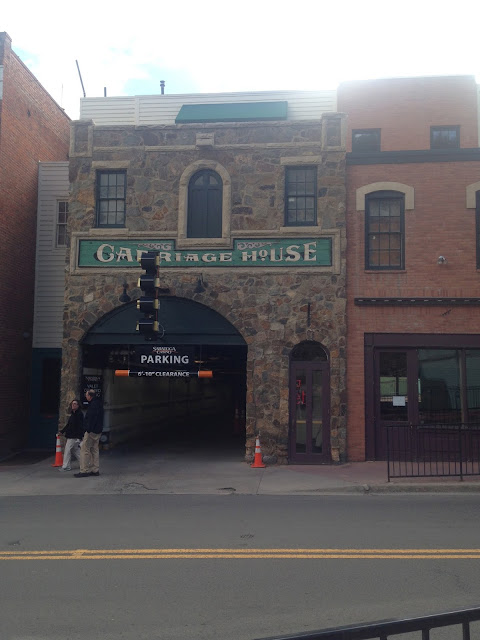 Ameristar Casino Resort and Spa is one of those modern buildings.  In fact, it's the largest and tallest casino, and the most popular.  This is where we stayed.  It was our very first stay at a luxury hotel and we had so much fun, it won't be the last! 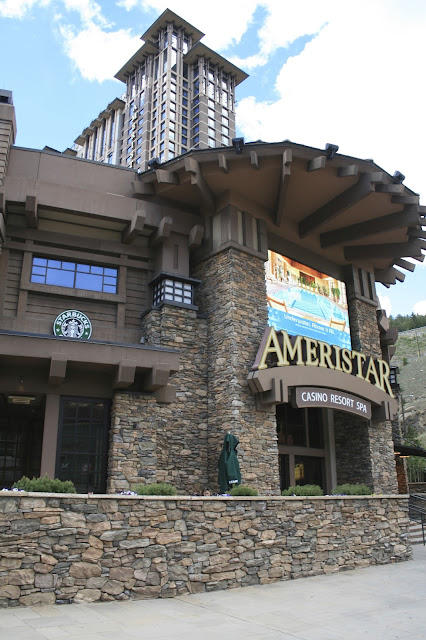 Our room was absolutely beautiful!  We couldn't believe the tall ceilings, the crown moulding, the furniture/decor, and the bathroom!  The closet even had it's own light that came on automatically when you opened the door!  Can you tell I'm a country girl by that statement? 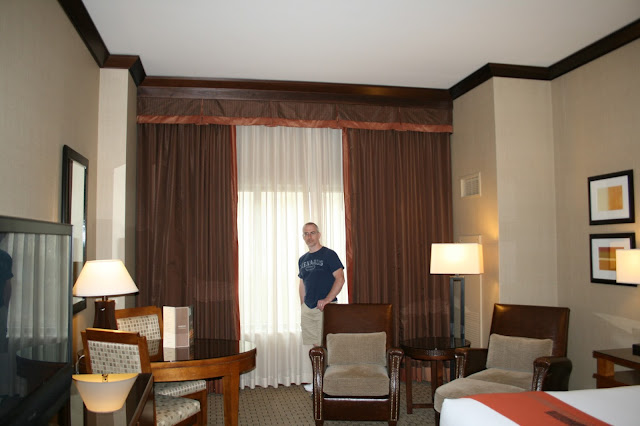 The bathroom had double sinks, a separate toilet room, a sunken tub that fit two comfortably (don't ask how I know that) and a glass shower.  It was the best bathroom I have ever used.  I wanted to take it home with me.  My husband was like "Uh, can we just live here?  We don't need anymore space than this for the two of us anyway." 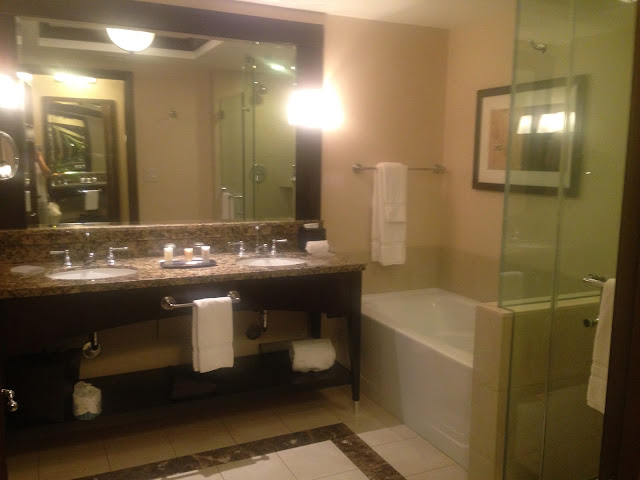 I have no idea what thread count the sheets were, but they must have been high because even my husband noticed how soft they were! 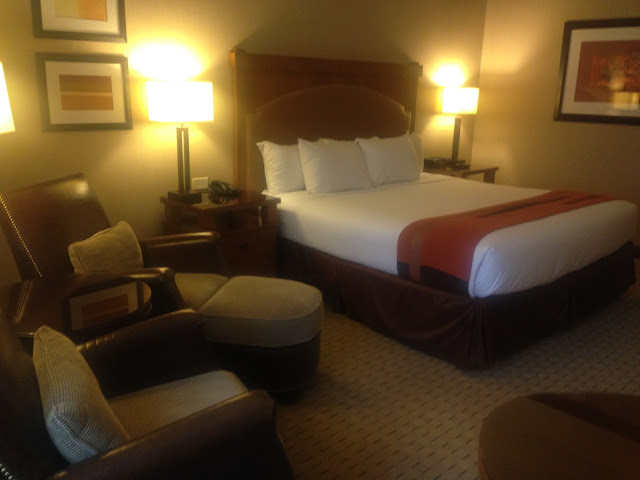 The hot tub was outside on the hotel roof.  It was a little chilly out, but you didn't feel it when you were in the water. 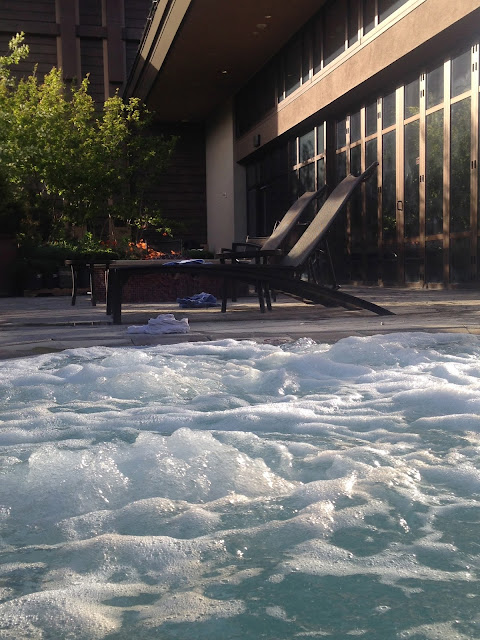 They even had several fire pits on the roof that you could warm up by. 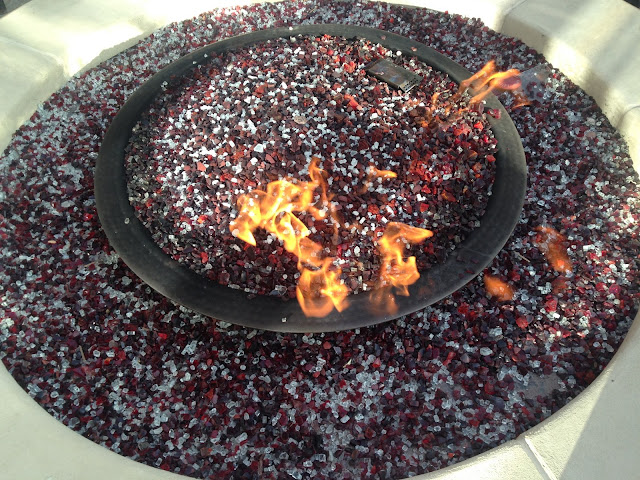 The pool was also on the roof, but inside.  It was absolutely huge for a hotel pool. 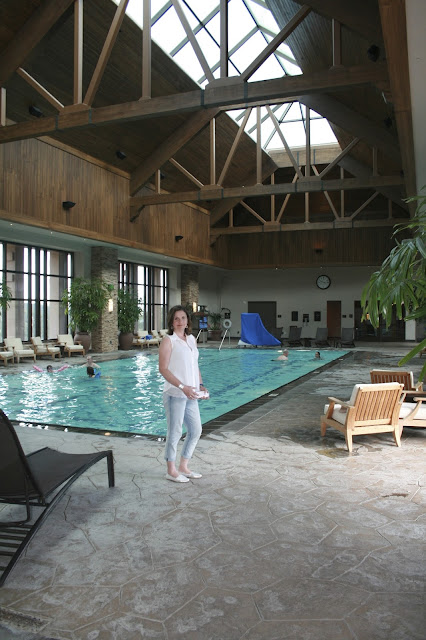 This hotel was so amazing, that after our walk, we spent the rest of the day (and night) in our hotel.  My husband went to use their amazing fitness facility, while I lounged pool side.  They had a spa, but I have never been to a spa before and I was nervous about going alone.  Someday I will have to try a spa treatment with a girlfriend.

After we both spent some time in the hot tub and drying off by the fires, we went out to dinner at the hotel's buffet. The casino had five restaurants inside.  We chose the buffet for dinner and did a restaurant for breakfast.   Like most casino buffets, they had everything you could imagine, but of course my favorite was the chocolate covered strawberries. 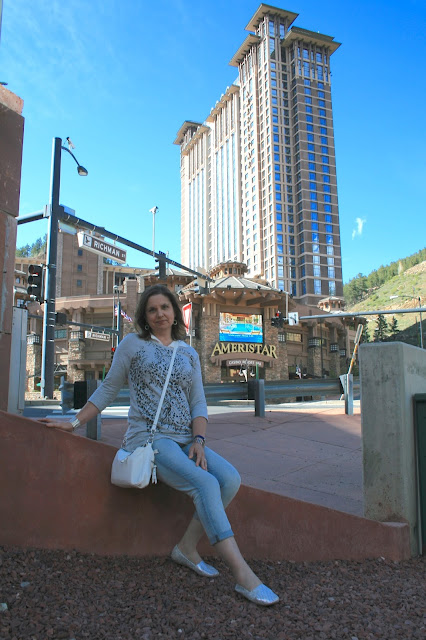 We enjoyed our experience at the Ameristar so much that we googled the resort when we got home and  found one in Missouri.  Were thinking of doing a short weekend trip or vacation to that one sometime soon.  I never thought I would be one to like luxury hotels,  I always feel uncomfortable in hoighty- toighty places.   But we had so much fun we decided to spend a little more money on hotels in our future trips instead of always staying in a modestly priced one.

So what about you?  Have you ever been to a gambling town before?  What do you think of mixing historic buildings with new architecture?  And/or, have you ever stayed in a luxury hotel before?

I'd love to hear from you!