This is a continuation of a travel series of a road trip I took to Las Vegas in May with my husband.  To start at the beginning, read THIS POST.   The rest of the posts are HERE, HERE, HERE, HERE, and HERE in chronological order.


Even though we were in Las Vegas for three nights and two days, we only spent one full day exploring Vegas for the other day was spent seeing the Hoover Dam and getting a glimpse of the Grand Canyon.

There are many bus companies that you can choose from that will pick you up right at your hotel and take you to the Grand Canyon.  They all vary in price, luxury, and what they have to offer.  You can choose from a personal guided tour that will cost you around a thousand dollars per person or you can go economy style like we did and pay about $100 per person for just a bus trip to the Canyon, breakfast, lunch, and admission/bus fees in the Grand Canyon West Rim.

The bus company we chose was Grand Canyon Tours Company.   Now I'll be honest and say I bought tickets to this tour without doing my research first.  I thought there was only one bus company and their website was the first website that came up when I googled it.  After I purchased the tickets, I read one horrible review after another of this company on Trip Advisor, and I was tempted to cancel my tickets.  But I would have lost around $70.00 if I did that, so I chose to keep my reservation and make the best of it.

Now your probably wondering if we had a car, why we didn't just drive to the Grand Canyon ourselves.  My husband was just ready to sit back and let someone else do the driving for a change, and I don't blame him.

The tour included a brief stop at the Hoover Dam, a bag breakfast and lunch, water bottles,  and admission to the West Rim. 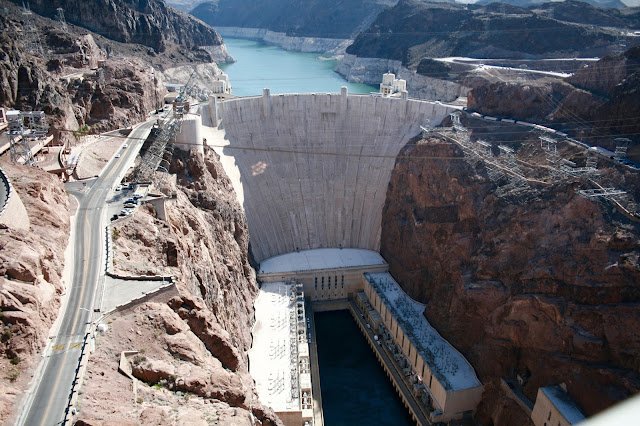 We only had about twenty minutes at the Hoover Dam, which is really all you need.  It's quite a hike up to the look out point of the dam, and that takes most of your time.  I would have liked a few more minutes to read all the display signs at the base of the walk way to the dam.

It is quite an impressive view.  The water is so blue and the mountain back drop is breath-taking. 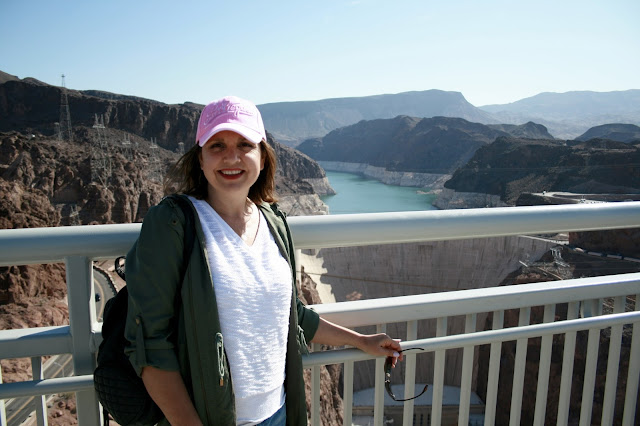 The main reason it seems most people on Trip Advisor didn't like this company is because you spend so much time waiting in line and riding the bus and less than four hours at the Grand Canyon itself.  It seemed to take forever to get there.  Our bus picked us up at 6:30 a.m., and then we drove around for awhile to pick other people up.  Then we were taken to a bus station where we had to get off the bus and get in a long line where we would receive a bag breakfast and hot coffee and a name tag/number of our tour.  The reason they do this is because everyone takes different types of tours so they have to separate people into the tour group that they paid for.  Once you understand this, it makes sense.  But I don't think most people on Trip Advisor understood why they had to go to the bus station.

Once at the Grand Canyon, you have to wait while your bus driver parks the bus and gets your  tickets.  There are no cars allowed inside the Grand Canyon West Rim.  Everyone has to park in a designated parking lot and from there you take other buses to the viewing areas.  Once we were handed our tickets we had to wait in a very, very, very long line to get on a park bus.  I was trying not to get upset because the day was half over and I was very anxious to see the canyon.

We took the West Rim Bus Tour because it was the closest to Las Vegas and therefore the shortest bus ride (and the most inexpensive).  On this tour are three stops along the West Rim:  Hualapai Ranch, Eagle Point, and Guano Point.  We skipped the ranch because we live in farm country and we do not need to see horses and other animals.  We were worried about time and wanted as much time as possible for canyon viewing.  But if you have small children, the ranch might be of interest to you.

So after waking up at 5:30 in the morning and standing in two long lines and a long bus ride, I finally got to see the canyon...this is my reaction: 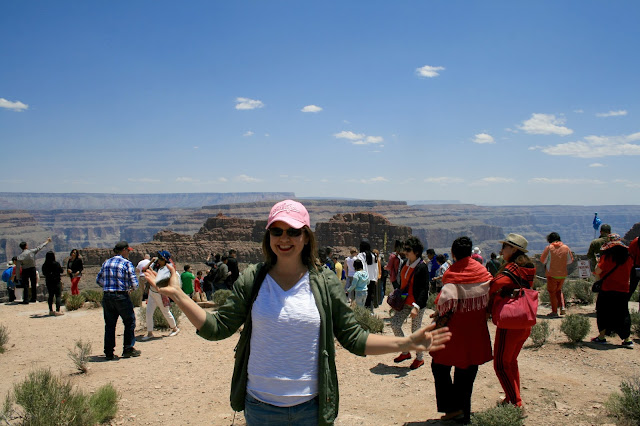 My first reaction?  This was it?  My husband and I weren't impressed.  We had seen so many spectacular views on our drive out to Vegas, that this just didn't seem that amazing to us.  Of course, that thinking changed when we went to the next stop.  This was Eagle Point where the main attraction was the formation that looked like a Eagle and the Skywalk.  We did not go on the Skywalk because I have a fear of heights and I did not think I could handle it.  Plus it would have cost us another $30.00 per ticket.

My next reaction was "There's way too many people here, I can't get a clear view!".  We were at the Grand Canyon during the off-season, and yet there were still so many people.  There are no barriers between the edge and the canyon, and I was worried with all the people someone might accidentally get pushed over (in fact, since I have been home I read a story where a 35 year old woman did fall to her death when she stepped out of the way to allow another gentleman to step by (read the full story HERE). 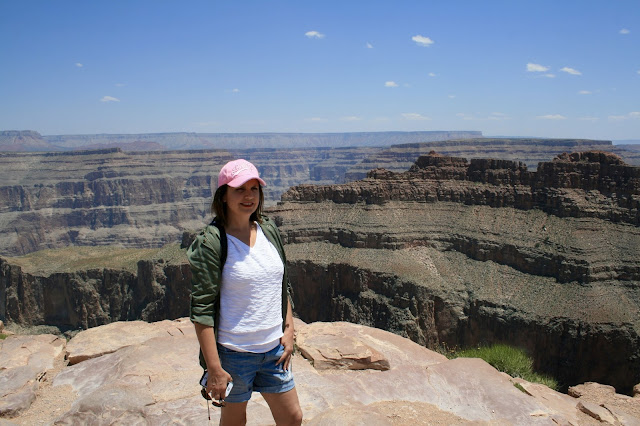 I stayed far away from the edge at all times, but my daredevil husband risked his life to get some amazing pictures...like this one of the Skywalk. 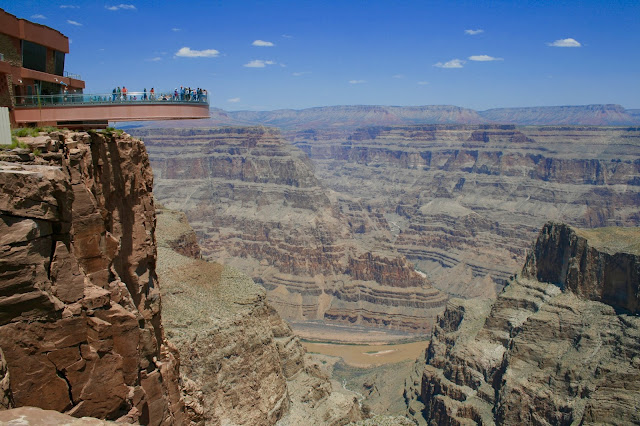 Or this one looking straight down into the canyon. 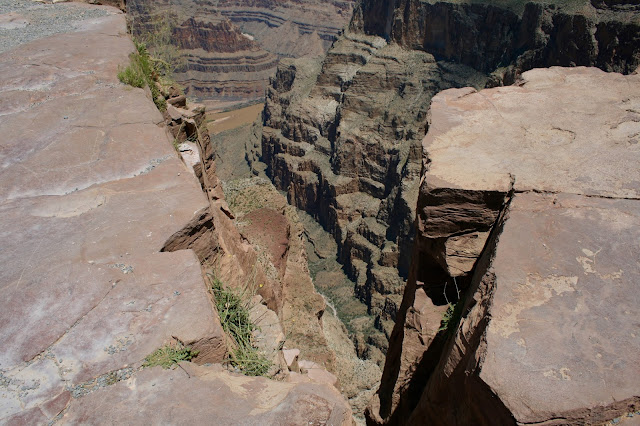 Guano Point was a much more impressive view for us than Eagle Point.  Even though it was still crowded, there is more space for people to disperse plus we left a lot of people behind back at Eagle Point.

At Guano Point is a circular rock formation that you can climb (yes, I climbed it!), and you get a majestic 360 degree panoramic views of the West Rim of the Grand Canyon from the top.  It's amazing! 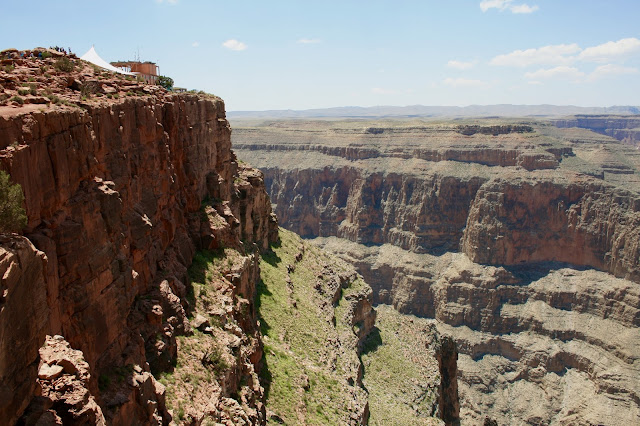 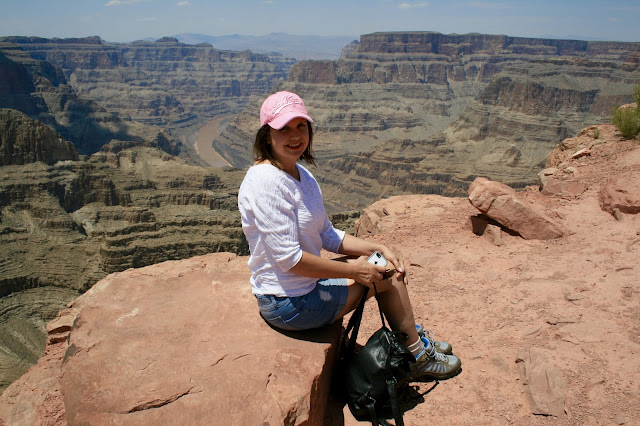 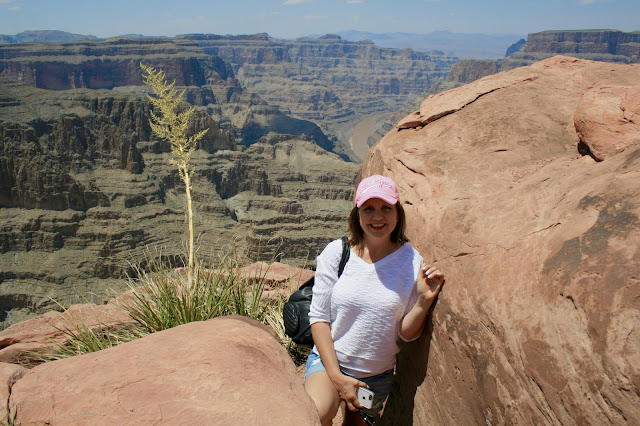 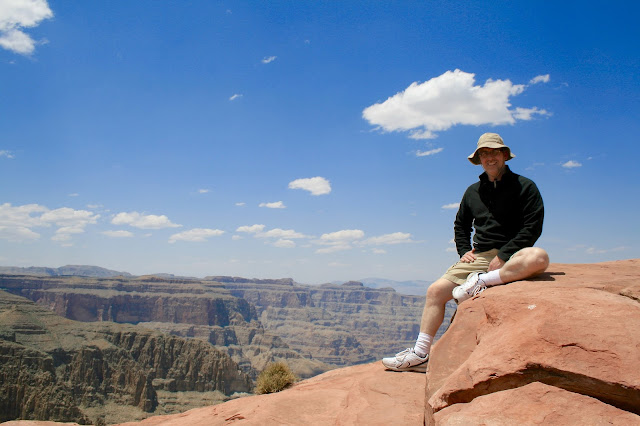 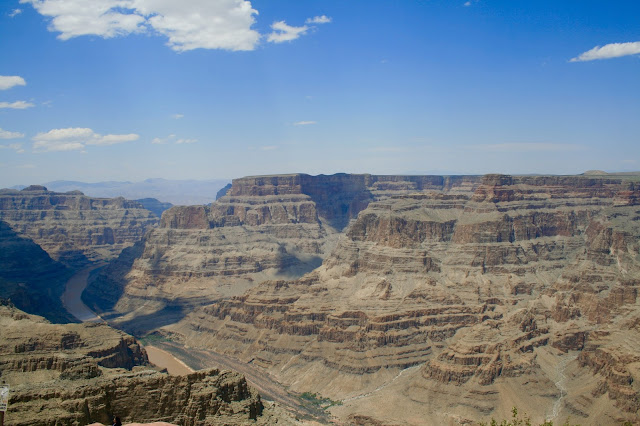 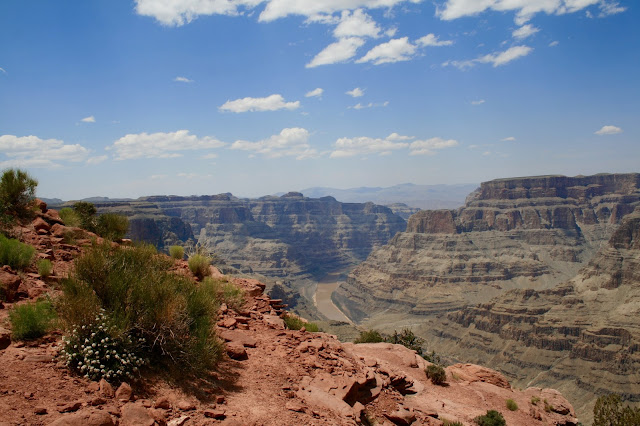 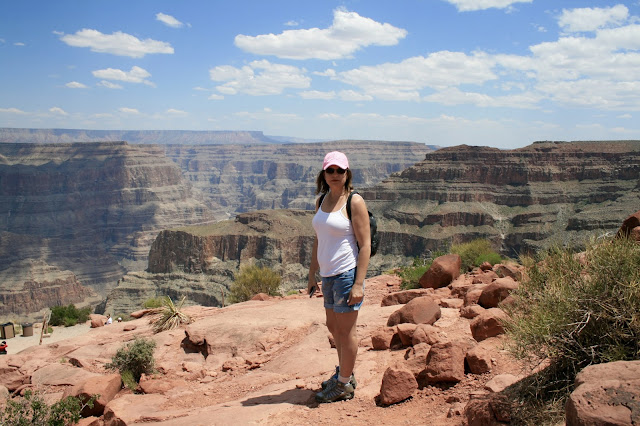 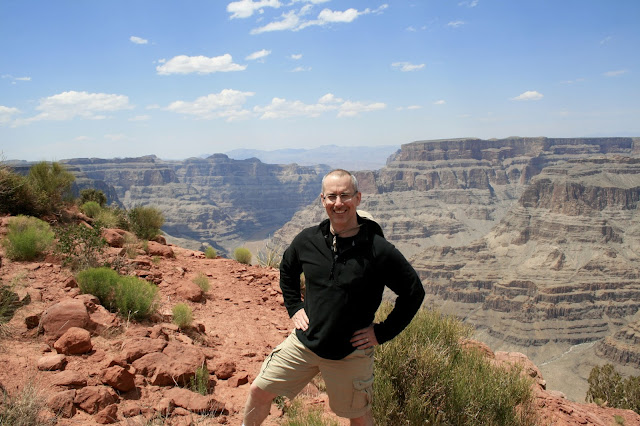 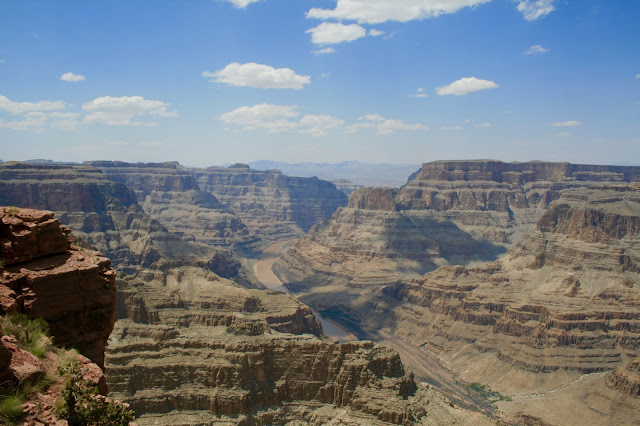 We were at the Grand Canyon in the middle of the day, probably the worst time of the day for photography.  The sun was so strong and bright.  But when you take a bus tour, you are on their time table.  If I were to go again, I would try to be there in the morning or twilight.  However, I still  enjoyed the colors in the layers of rock and the shadows cast onto the formations from another formation. 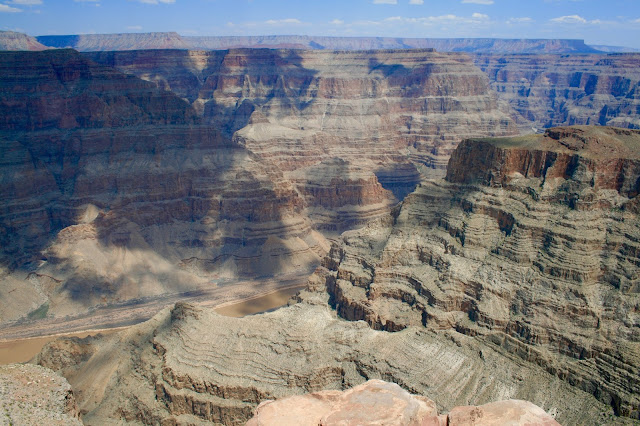 Did you know Guano Point literally means "Bat Droppings"?  That's because there is an old mine here where all kinds of bats, and their droppings, were found.  See the shadow behind me?  That's the shadow of the cable car station that is still here. 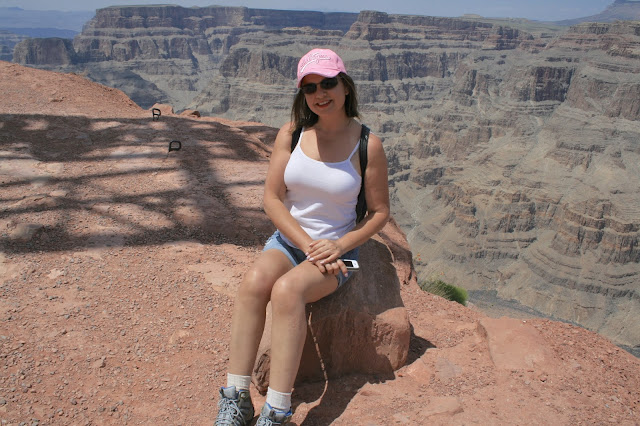 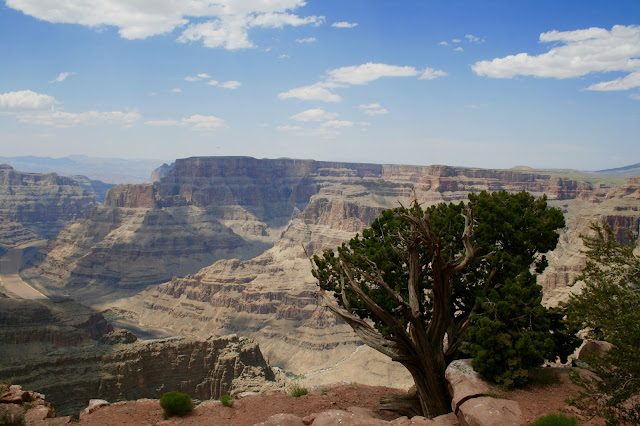 There were so many of these big black birds flying around Guano Point.  There is a restaurant on this point, so these birds are very people friendly for their always hoping to get scraps of food. 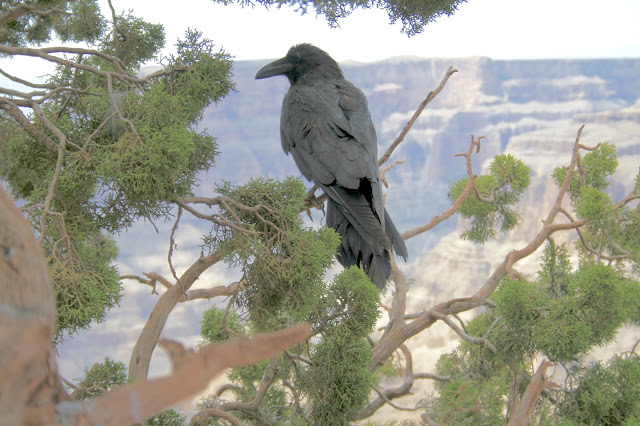 My opinion of the Grand Canyon changed once I reached Guano Point and I was able to walk around a bit and get some unobstructed views.  It's so hard to tell scale in pictures, but the sheer size of this place is phenomenal.  Look closely at the first narrow rock formation on the right.  Those are people walking on the ridge.  They are so small, you can barely see them, but it helps to give you perspective of the magnitude of this national treasure. 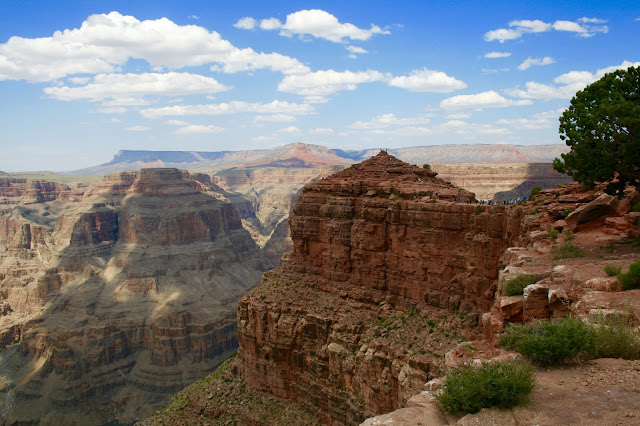 The majority of the West Rim visitors arrive from Las Vegas because it's only 118 miles away vs. 350 miles to the South Rim.

Most tourist's to the West Rim only spend 3 to 4 hours there. 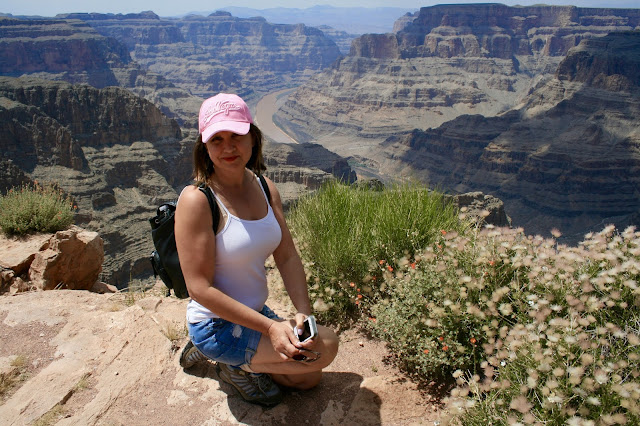 I wish I had known these things before my trip.  My husband and I did not have the Grand Canyon experience we were hoping for.  We wanted time to be able to hike and explore, but the West Rim really does not have any hiking trails other than the short one on Guano Point.  You need to go to Grand Canyon National Park for that.  However, I do not regret going and getting a taste of the Grand Canyon...and that's all this was...a taste.  I think if you want to experience the beauty of the canyon, you need to stay in a lodge or campground in the national park.

I don't regret taking a bus tour, in fact, I'd recommend it to anyone coming from Vegas.  The tours save you a lot of money on all the extra fees that can add up if you try and do it alone.  Plus, the area is in a remote wilderness location.  The gas stations/convenience stores are very few, and the two that I experienced provided minimal services at best.   There is also a 14 mile unpaved road leading to the Hualapai Indian Reservation that can be quite bumpy and hard on a vehicle. 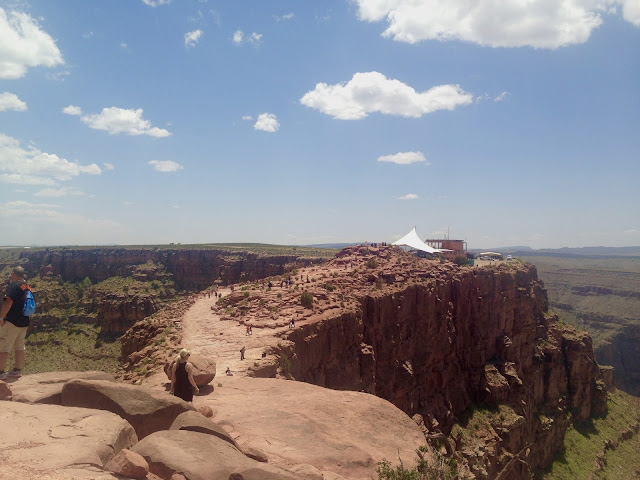 Although I had hoped to cross the Grand Canyon off my bucket list, I don't think I can now that I have done the research and know more.  Everyone says the most beautiful and spectacular views of the canyon are on the south rim, and many people don't even consider the west rim part of the canyon.  That I think is a bit nonsense, but it does entice me to dream of seeing more.