This is a continuation of a travel series to The Great West.  To start at the beginning, go HERE, HERE, and
HERE, HERE, HERE,, HERE and HERE!
Two week's ago, I shared the story of how we ended up visiting Theodore Roosevelt National Park and a few stops and short trails we took on the Scenic Loop Road.  This week, I'm going to finish up our drive along the road, sharing two more trails, and a few highlights.
Buck Hill Buck Hill is the highest accessible place in the park with an elevation of 2,860 feet.  You can enjoy the view from the parking lot, but there is also a short 0.2 mile steep hike to this panoramic vista of the badlands. 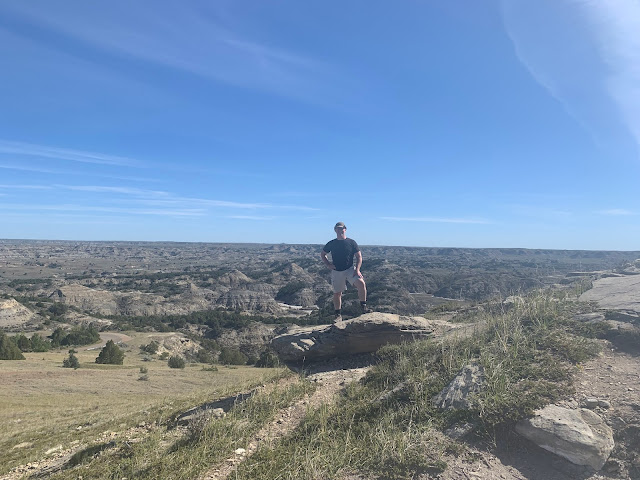 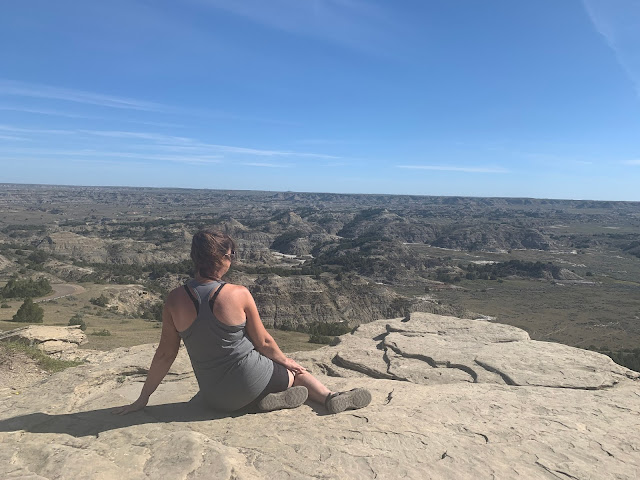 As always, there were plenty of buffalo trails you could take in any direction to explore more, which we did! 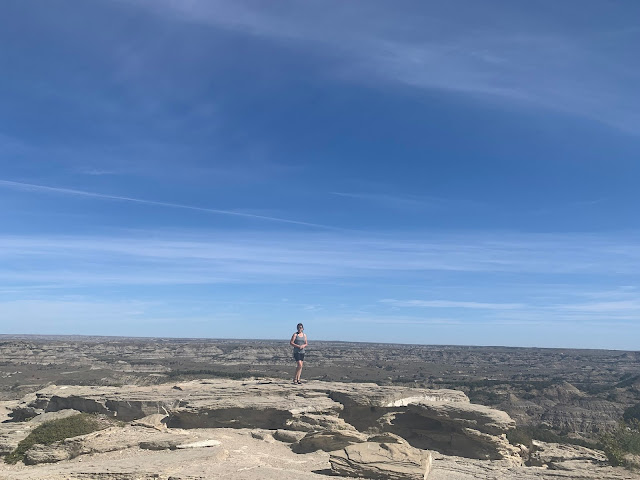 Coal Vein Trail
This little trail was quite the gem.  We really enjoyed this one.  The coal vein portion of the trail is only a 0.8 mile loop, but I think it's quite a bit longer than that or we got lost because we once again followed a bison trail, for we seemed to spend quite a long time on this one.
When we first started the trail, we came across this bison carcass.  We thought it was pretty cool, as we never saw something like this hiking before! 😀 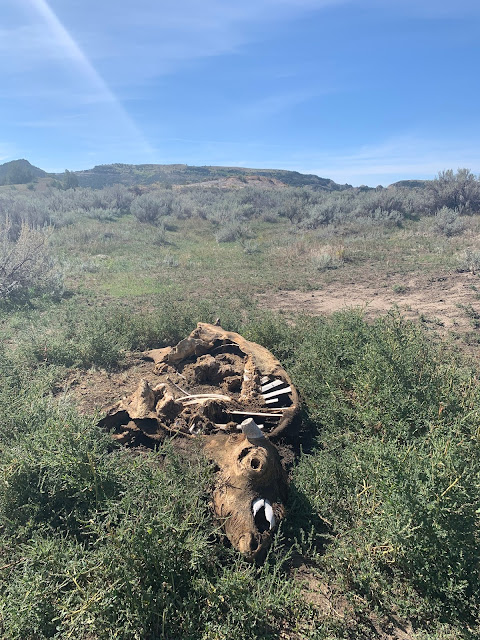 The trail is very pretty, with lots of wildflowers and cactus.  It kinda reminded me of a trail we took in Zion National Park. 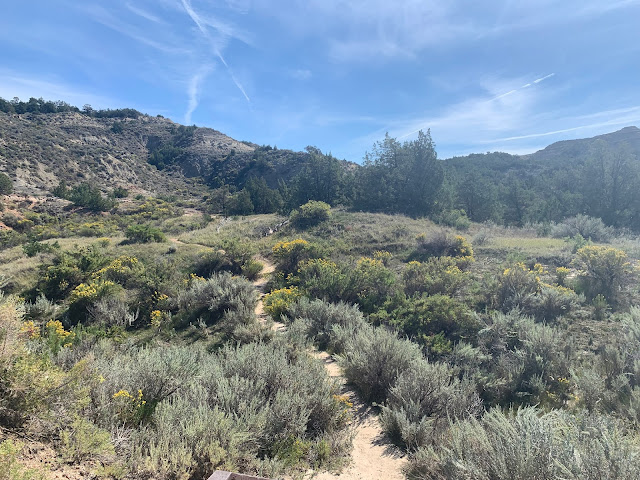 As always, we kept seeing buffalo patties so we had to keep an eye out for buffalo.  Thankfully, we didn't encounter any but I've read many hikers reviews where they said they couldn't complete the trail because of buffalo. 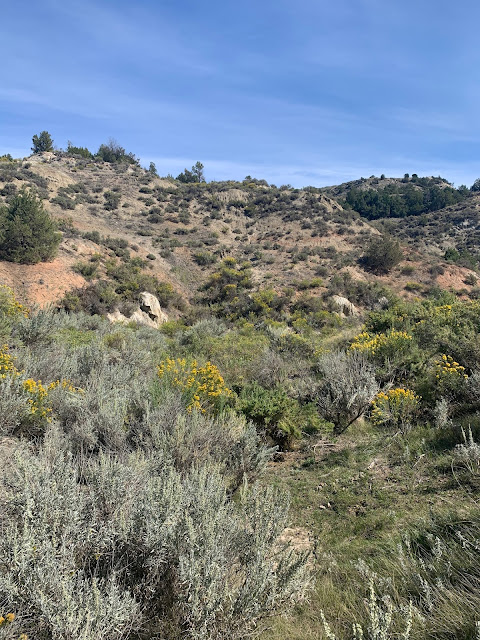 I know the purpose of this trail is to learn about the coal vein, but I was just loving all the wildflowers.  Of course, I probably wasn't even on the trail, and just following a buffalo path, but I was having a good time, so who cares? 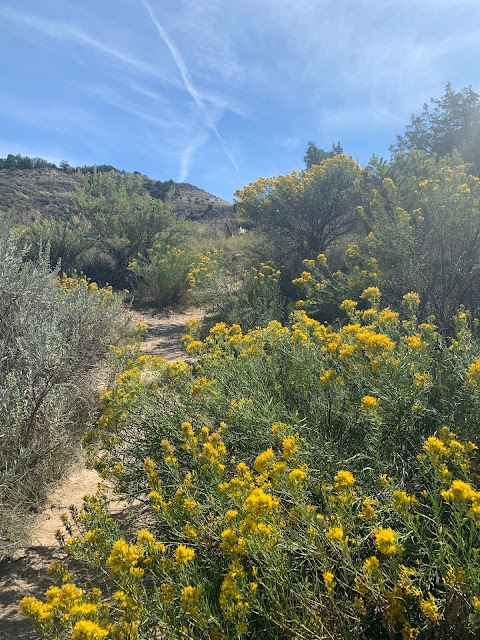 The Coal Vein Trail highlights a former coal vein fire.  You are supposed to pick up a guide at the Visitor Center and it correlates with points of interest on numbered posts.  But we were always in the park before the Visitor Center even opened so we never got a guide.  If you'd like to learn more about the Coal Vein fire, you can read all about it HERE 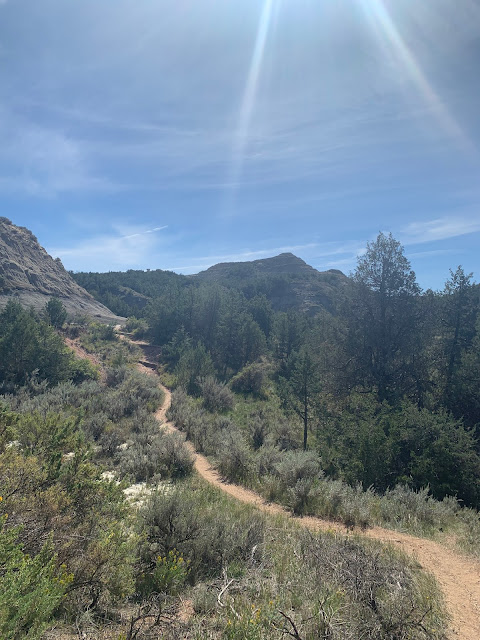 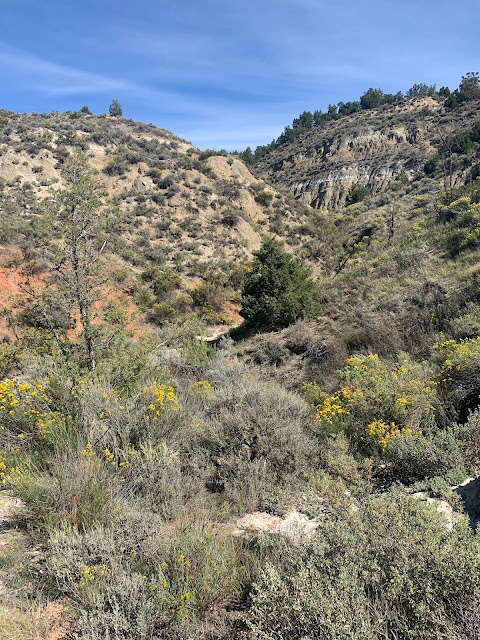 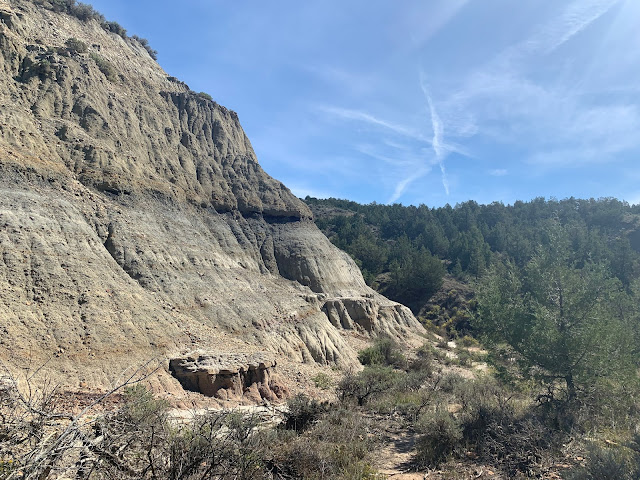 It really is a beautiful area with lots of greenery. 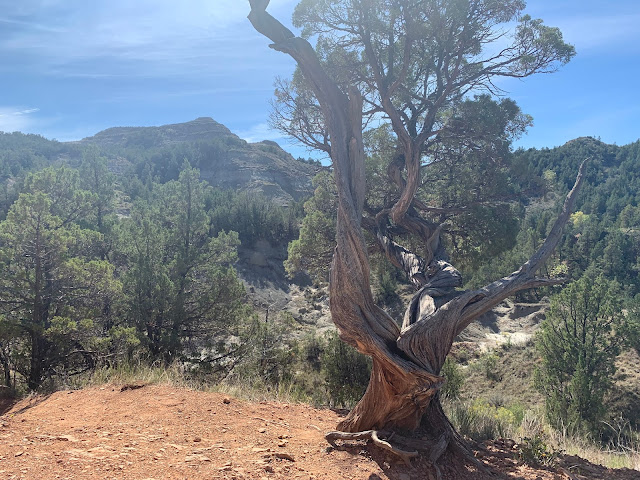 My husband and I both thought this rock formation looked like a rabbit.  Do you see it?  His head would be in the middle of the photo. 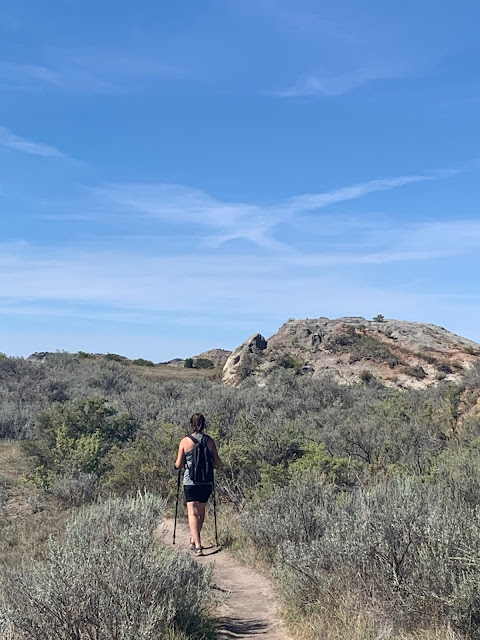 This area of the park seemed much greener than the badlands vista we saw earlier in the day. 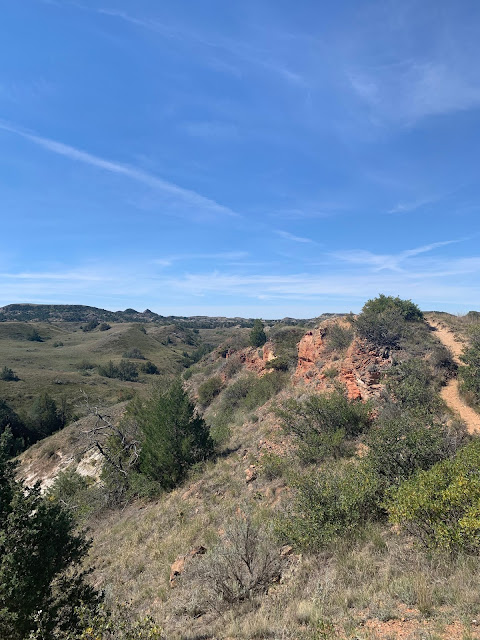 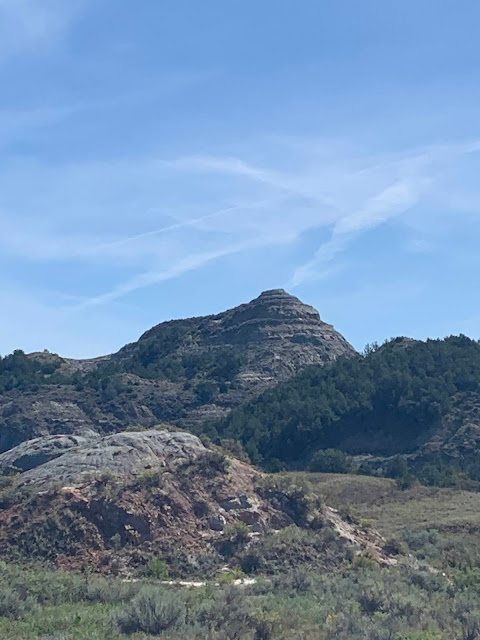 After we finished the Coal Vein Trail, we got back in the car to drive as far as they would allow us to on the Scenic Loop Road before we had to turn around.  As I explained two weeks ago, the Scenic Road Loop is partially closed due to erosion.
We saw more buffalo. 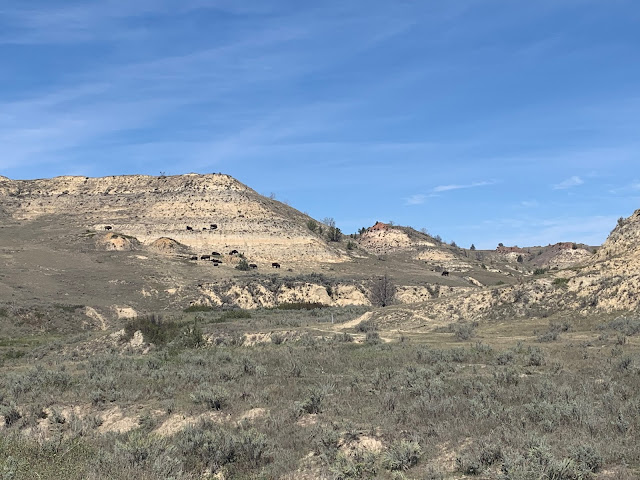 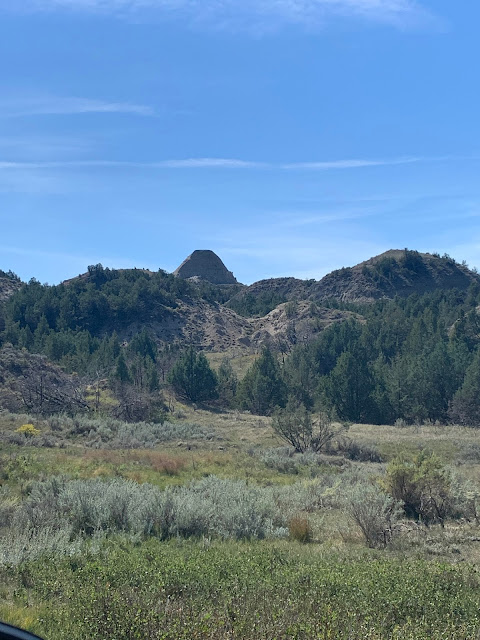 And a big daddy buffalo!  This was one of the biggest buffalo we saw in the park. 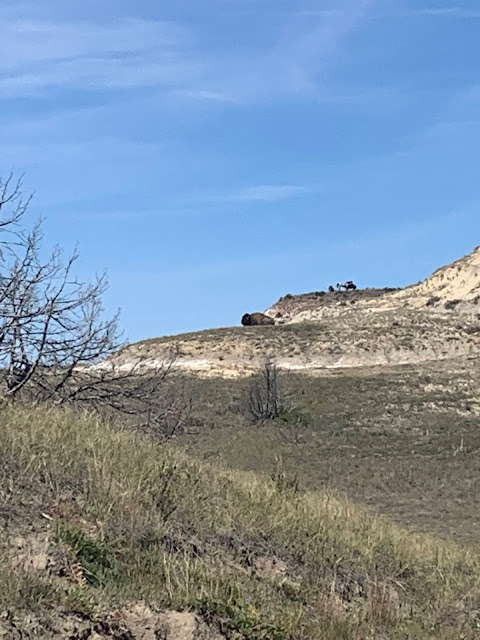 But the highlight of our day came when we saw a herd of wild horses crossing the road in front of our car! 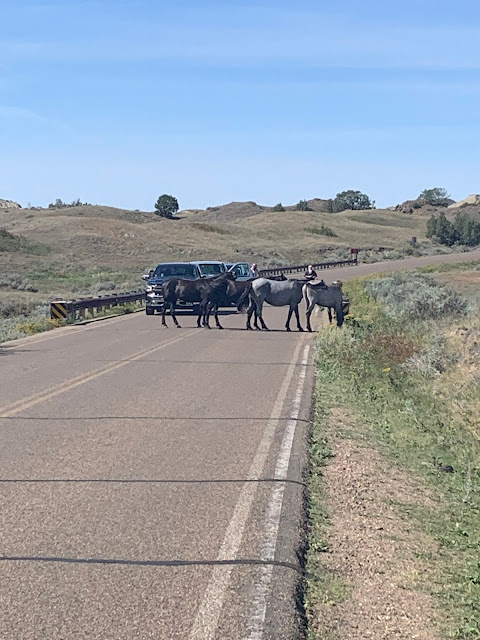 This was the first time I got to see them up close!  I got so many great pictures of these beautiful animals. What a thrill it was to see wild horses in nature. 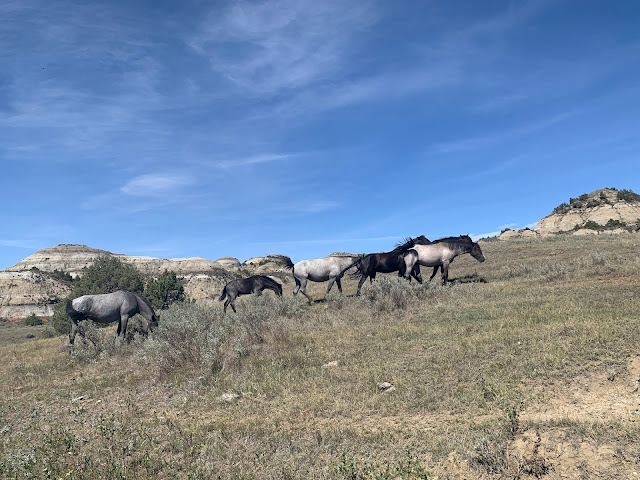 And as I said last week, Theodore Roosevelt National Park is loaded with buffalo.  You can't walk or drive anywhere without seeing herds of them.  They are as common as robins. 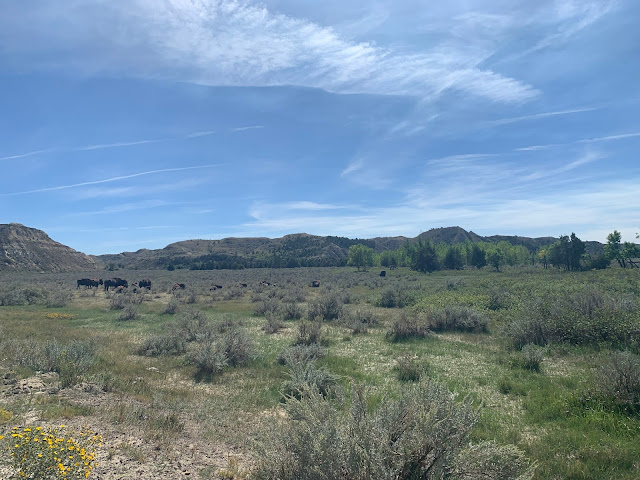 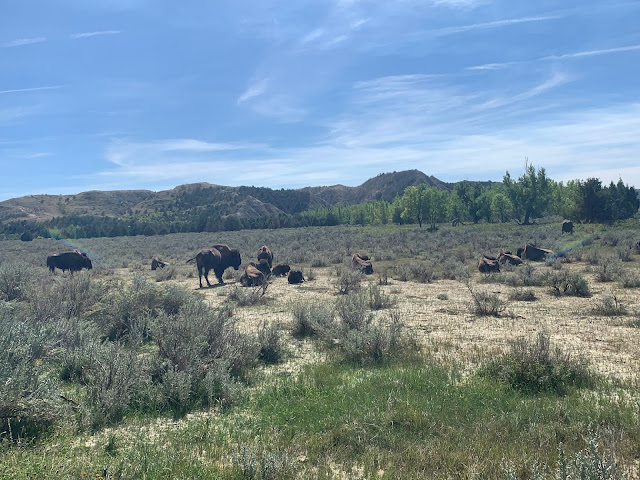 Well, when we finished the Scenic Loop Road we decided to pop in the Visitor Center to get some ideas about what to do the next day.  At the back of the Visitor's Center is Theodore Roosevelt's Maltese cross Cabin.  It has been moved from its original location and restored.  Inside the cabin are some of Theodore Roosevelt's personal items.
Theodore Roosevelt National Park is the only national park named after a president.  He came to the Dakota Territory in 1883 to hunt bison.  A year later, after losing both his wife and mother on Valentine's Day, he returned to the Dakotas to grieve.  He became a cattle rancher, and took some time to have adventures and heal.
Later, when he was president from 1901-09 Roosevelt established the US Forest Service and signed the 1906 Antiquities Act, under which he proclaimed 18 national monuments.  He worked with Congress to create five national parks, 150 national forests, and dozens of federal reserves--over 230 million acres of protected land.
Theodore Roosevelt National Park was not the president's creation.  It was established in 1947 to honor him and to provide a place for everyone to experience his beloved badlands. 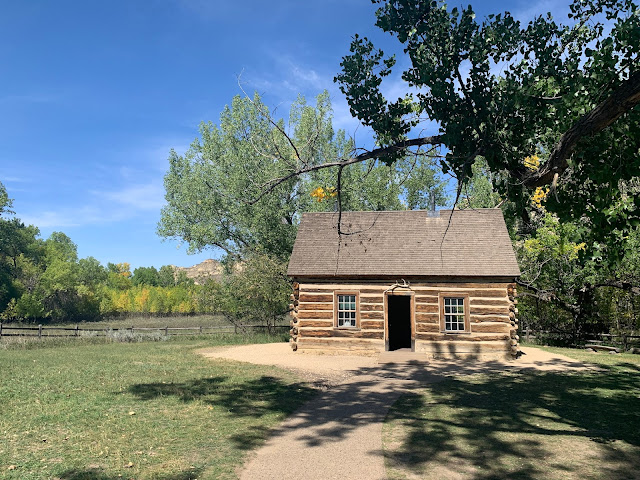 Have a Great Day!  Amy
Linking Up with these Fabulous Blogs HERE!
Posted by Amy Johnson at 12:00:00 AM