This is a continuation of a travel series to The Great West.  To start at the beginning, go HERE and HERE!
On the second day of our vacation out west we left Wall South Dakota and began driving towards our next destination Spearfish Canyon.  Hubby wanted to break up the drive a bit so he googled "Things to do in Sturgis, South Dakota" the night before, and discovered Bear Butte State Park.  It was a completely unplanned, spontaneous stop and we were so happy we kept a flexible schedule to allow us to stop here because it truly was one of the highlights of our trip. Bear Butte State Park is located about six miles from Sturgis.  It is a famous landmark in the area.  The mountain is called "Bear Mountain" by the Lakota Indian Tribe, and is considered sacred to many American Indian tribes who come here to hold religious ceremonies. Red Cloud, Sitting Bull, and Crazy Horse have all visited Bear Mountain.  General Custer camped near the mountain, and Bear Butte served as a landmark guiding settlers into the area. 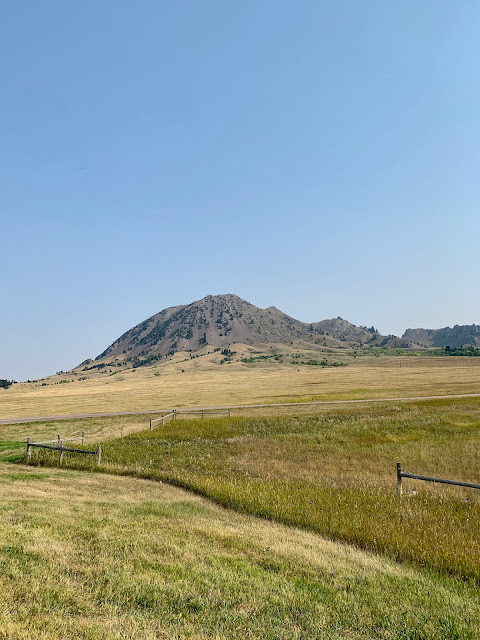 There are only two trails in Bear Butte State Park, a lake trail and the summit trail.  The park is mostly known for its fabulous summit trail.  It is 1.85 miles to the top of the butte which is 4, 426 feet above sea level.  There is a 900 foot vertical climb from the parking lot to the start of the trail.  In the photo below you can see me on the steps as we just start this climb with the famous Bear Butte behind me. 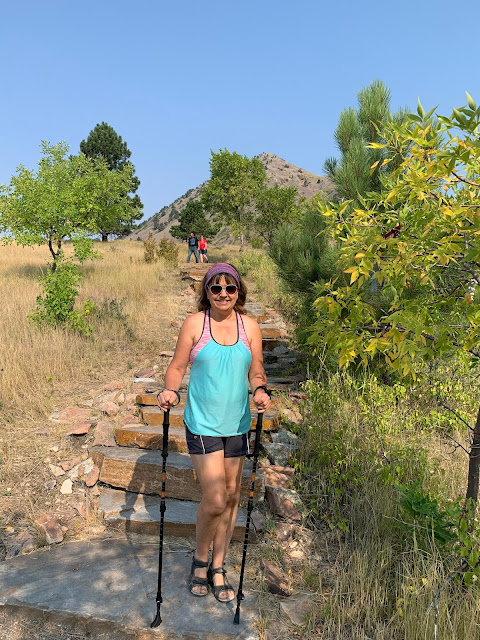 I was dressed in my active swim wear and hiking sandals because after this we were going to drive to Spearfish Canyon for a river hike.  Although my clothing was ok for this hike, my footwear was not.  I should have changed into hiking boots as the terrain was rocky and rattle snakes were plentiful.
There was a heat advisory this day, so it was advised to take lots of water and hike early in the morning or early evening.  But because we traveled early in the morning, we were starting our hike mid-morning.  We met plenty of hikers coming back down as we were going up, but a few were going up with us as well. 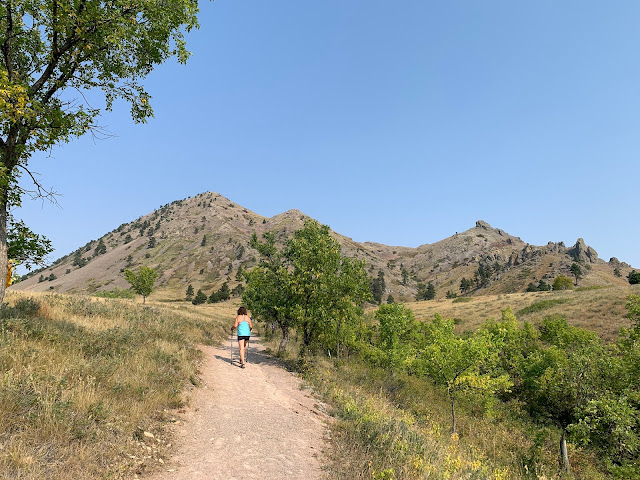 At the start of the hike, you walk through a lovely forested, prairie-like area.  Take advantage of the shade here, because the higher you climb the less shade there will be. 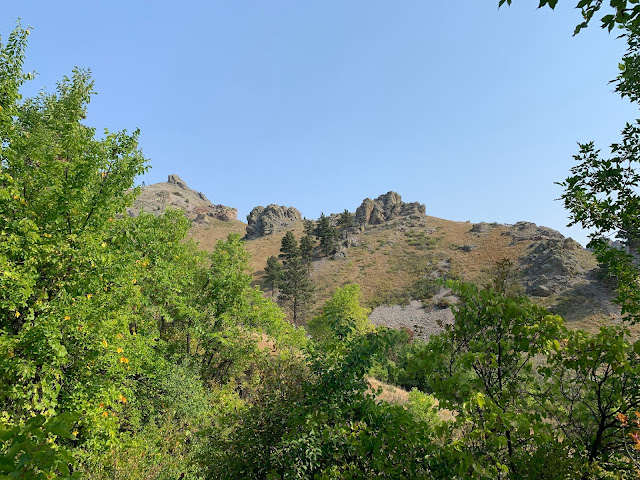 In this area you will notice brightly colored cloth strips hanging in all the trees.  They are prayer clothes that represent the prayers of the individual worshippers.  You are asked not to photograph them, which is why you may not see any in my photographs (although some got captured accidentally). 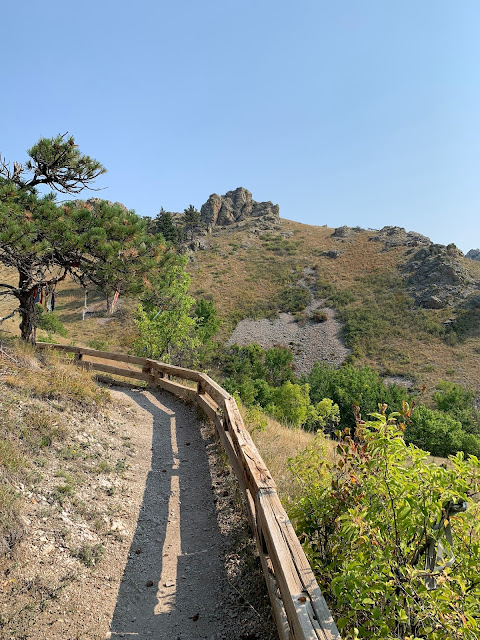 The views got insanely beautiful right away.  You don't even have to climb to the top to see incredible views. 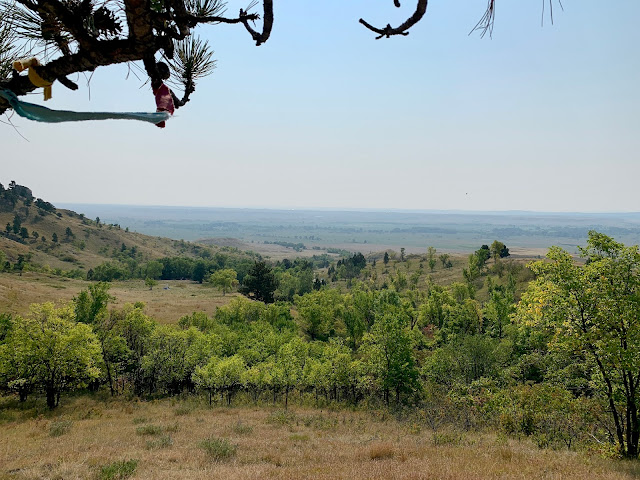 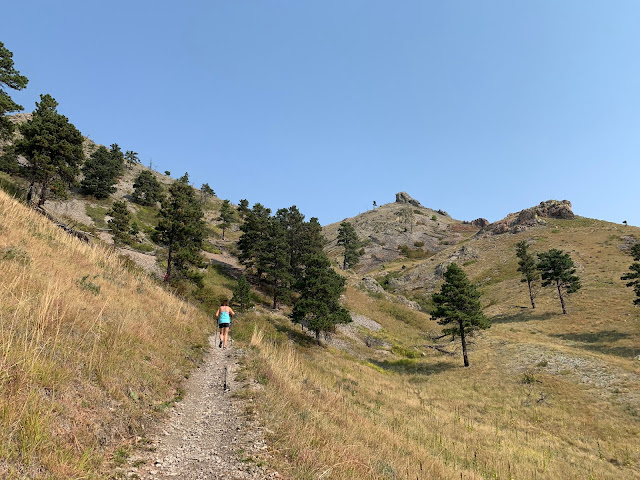 Once you get to this point, you've done the worst of it.  The initial climb to the summit is the hardest, then it sort of levels off and you just walk along the ridge on switchbacks.  We ran into one woman who turned around at this point because her vertigo was bothering her.  Then on the return trip we ran into another woman who was really struggling and asked "How much further".  We responded "You have a long way to go yet".  We had no idea if she decided to continue on or not.  She did not look so good. 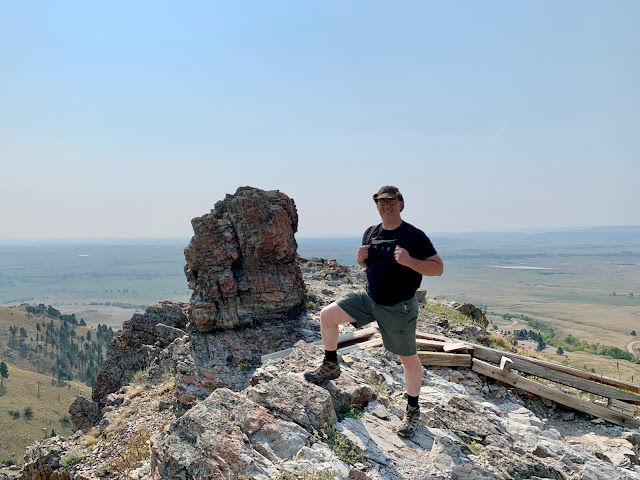 The unique rock formations are always so interesting to us. 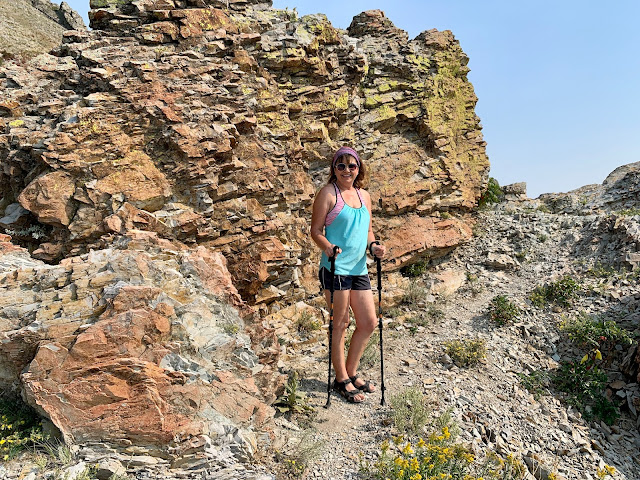 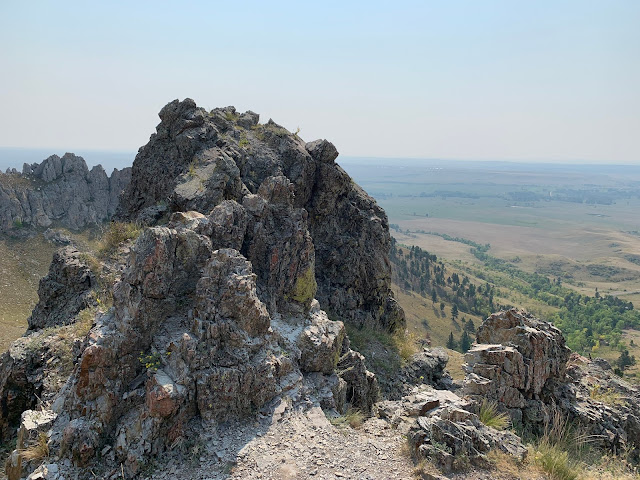 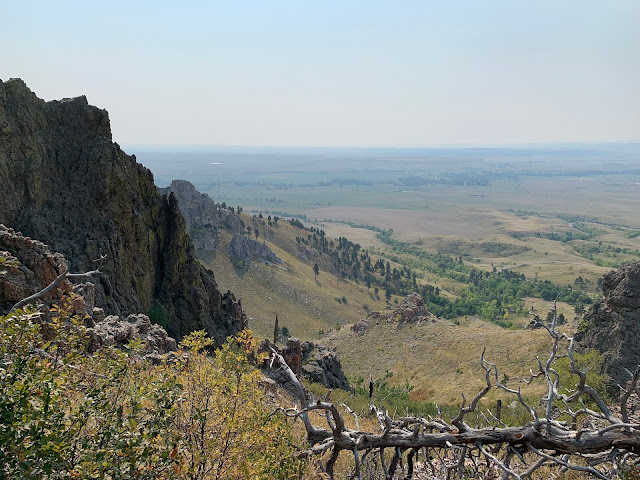 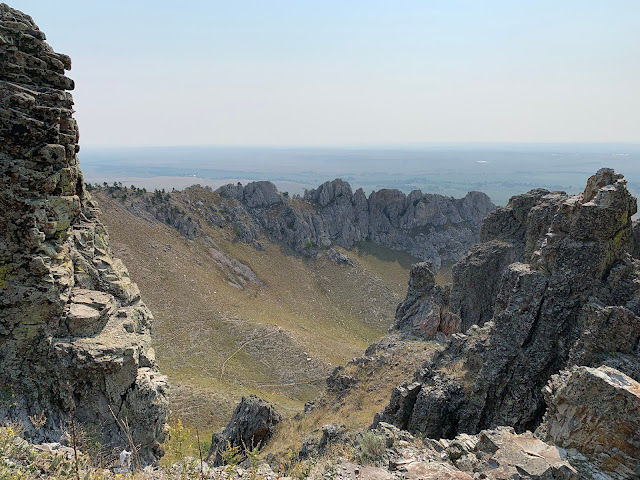 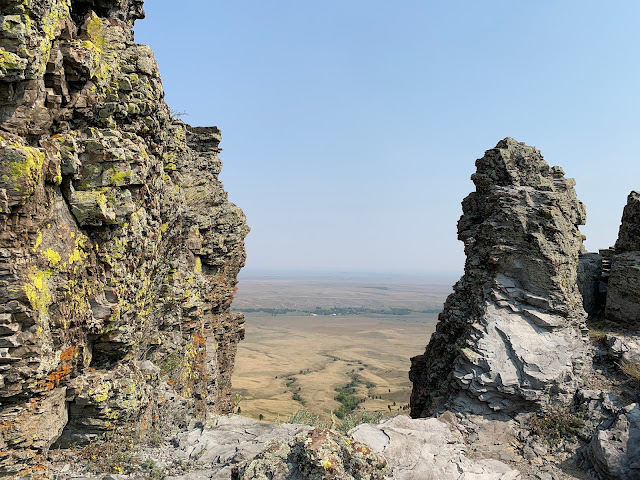 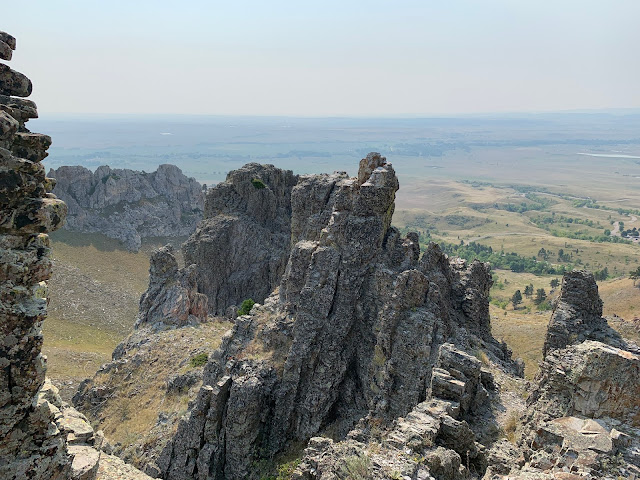 There were a few benches here and there where you could stop and take a break.  We stopped at one in this area and spent quite a long time chatting and eating, and then I turn around and to my surprise I saw a deer!  I could not believe how unafraid he was of us. 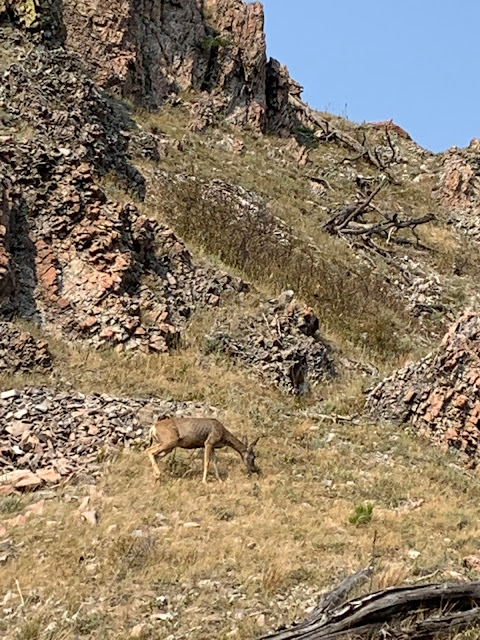 After our break, it was time to hit the trail again and then the real fun began! 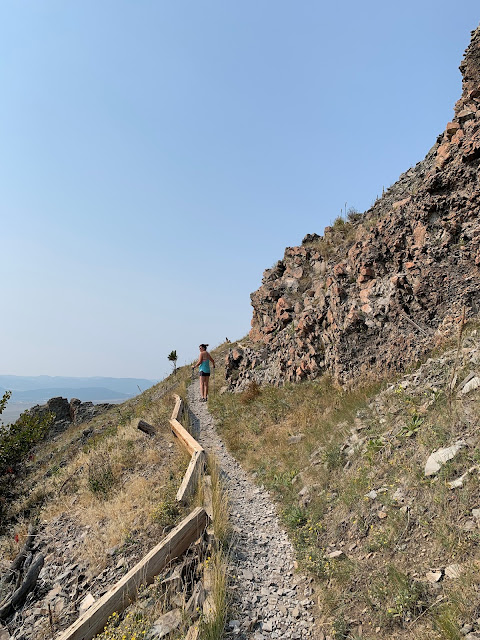 Wow! I cannot say enough about the incredible beauty of this trail. If you're ever in this area, you really must hike this trail.  What made it so special is that the scenic views were non-stop because there were not any trees to block the view.  In most mountain trails we have climbed, we were climbing through a forest. The typical mountain trail, you hike awhile, reach an open area, enjoy the view, then back into the forest you go until the next opening.  On this hike, it's all open.  You are literally walking on top of a mountain ridge with obstructed views the entire time.  It's incredible! 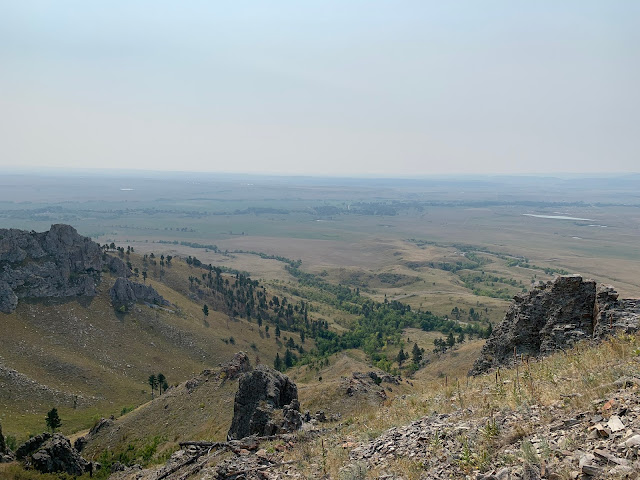 We could hear a "mooing" sound the entire time we were hiking and couldn't figure out if the black animals we saw in the distance were cows or Buffalo.  There are buffalo in this park, and you will drive right past them as you enter the park. 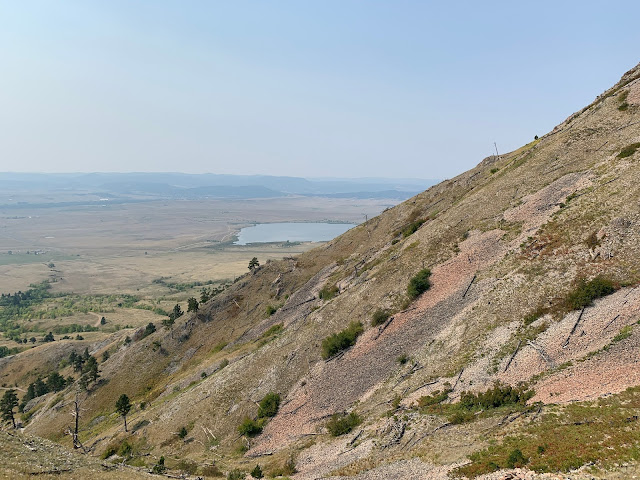 The trail is very narrow and has steep drop offs.  I don't recommend this hike for children or anyone afraid of heights.  However, I am TERRIFIED of heights, and I managed.  The scariest part is at the very end, coming down from the scenic deck. 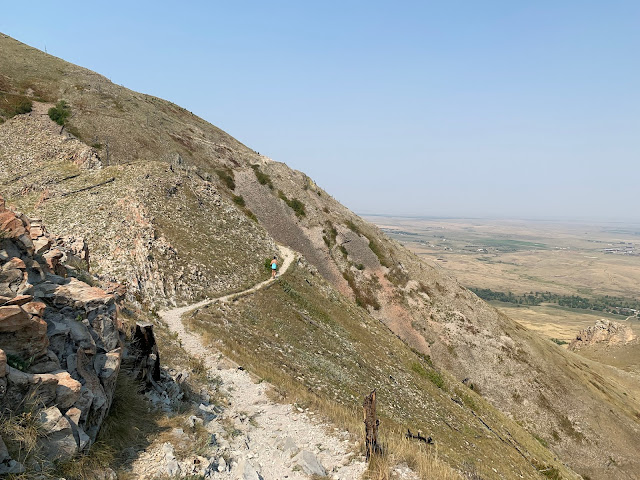 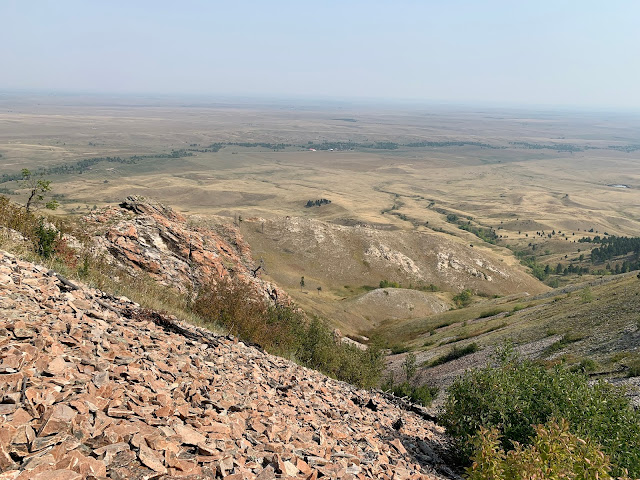 There were several spots like this one, where I thought "Wow, if I trip I could tumble right over the edge".  I thought it was insane that they didn't have little fences in certain spots like this. 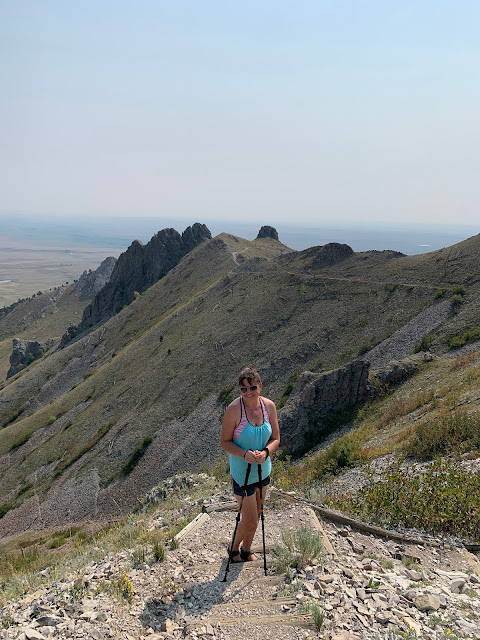 The trail ends at this spot up on top.  It's a steep climb of stairs to get to the deck. 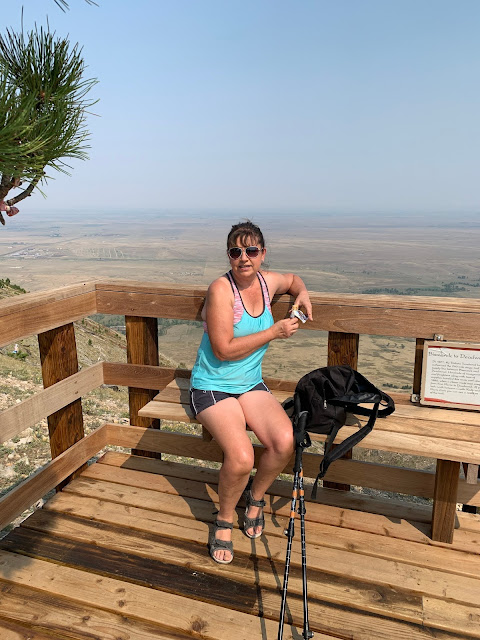 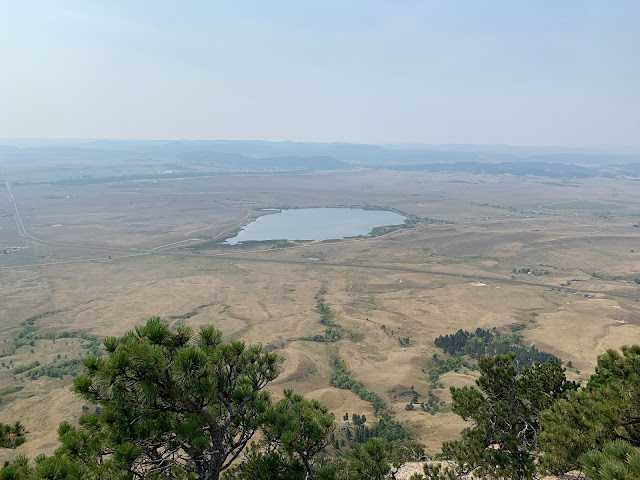 As I stated earlier, coming down off the deck was the hardest part because there was no guard rail at the end of the steps, just a steep drop off. It was terrifying for someone like me who is afraid of hikes. 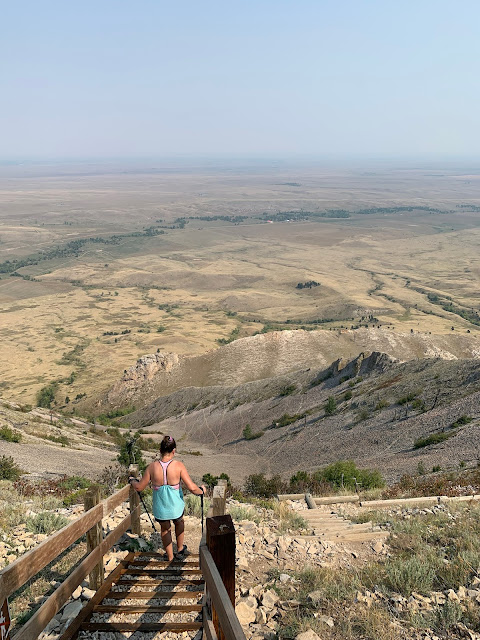 This picture gives you a great idea of what the trail is like once you reach the summit and can just walk along the top of the butte. 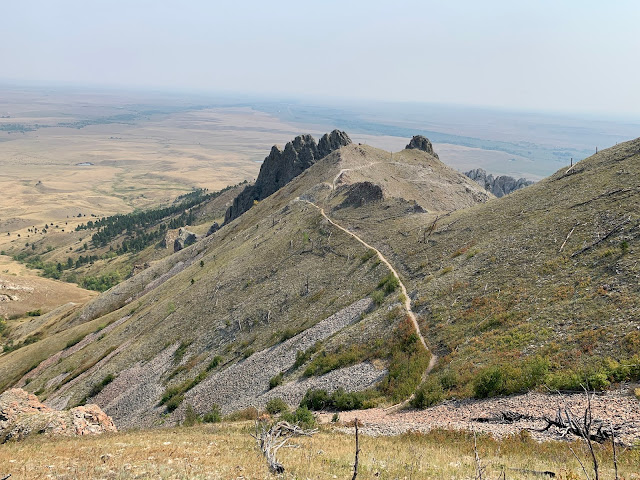 I have to add, that there was a rattlesnake warning at the Visitor's Center.  We didn't see a rattlesnake, but we definitely heard a rattlesnake warning.  We were cautioned by some other hikers coming down that there was a rattlesnake under the steps so be careful.  As we approached the steps, we definitely heard the "rattle" sound.  I was really nervous, because all I had on was sandals, but I felt I had come too far to turn around now, so I just quickly climbed the stairs.  Other hikers heard the sound and turned around, not willing to take the risk.  On the return trip, I didn't hear the rattlesnake so he must have moved on. 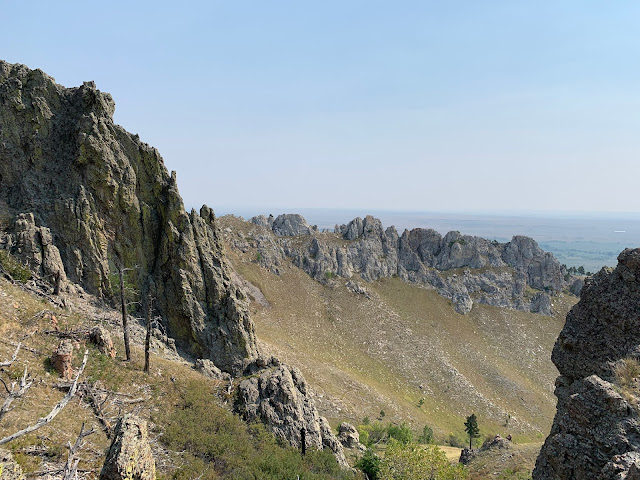 The Summit Trail Hiking Trail in Bear Butte State Park was such a wonderful, spontaneous surprise.  It's always nice when something you never planned to do on vacation turns our so incredible.  We usually plan our vacations very well, but it's nice to have some flexibility to do things like this.
After our hike, it was back in the car to drive to Spearfish Canyon and enjoy a relaxing river hike:  more on that next week!
Have A Great Day!  Amy
Linking Up with these Fabulous Blogs HERE!
Posted by Amy Johnson at 12:00:00 AM