Almost every Sunday, during the growing season, I love to share "What's Blooming In My Yard"!

This is what has been blooming the past two weeks:

For weeks, I've been watching all my favorite fashion bloggers pose in front of or under gorgeous flowering trees, and it was finally my turn!  The crab apple trees bloomed in Wisconsin this week!  We have four flowering crab apple trees in our yard:  two pink and two white.  Here is the white one with some white tulips in the foreground. 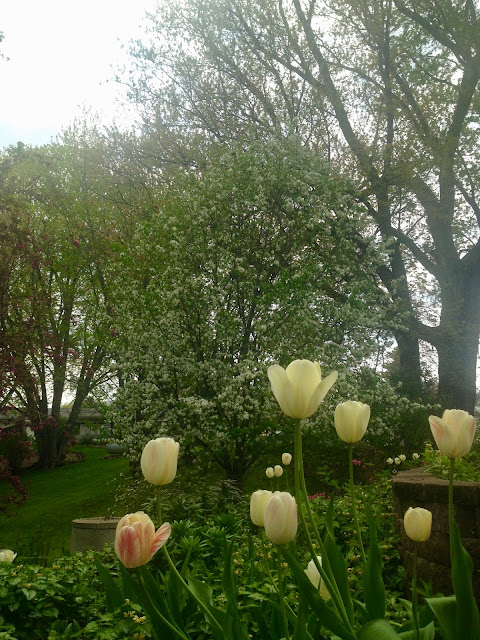 The white viburnums have also started to bloom;  see it in the background? 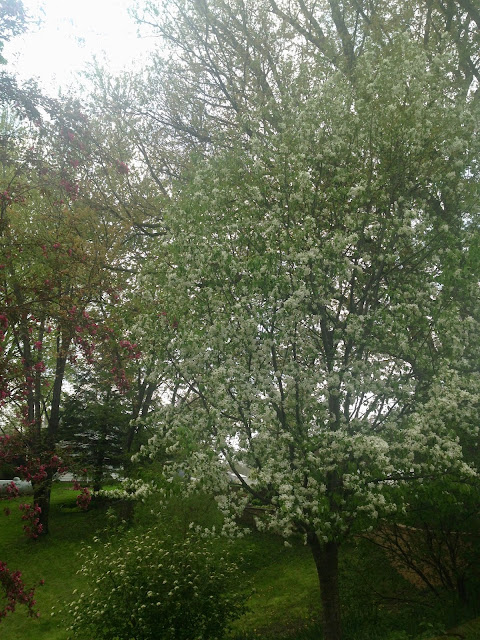 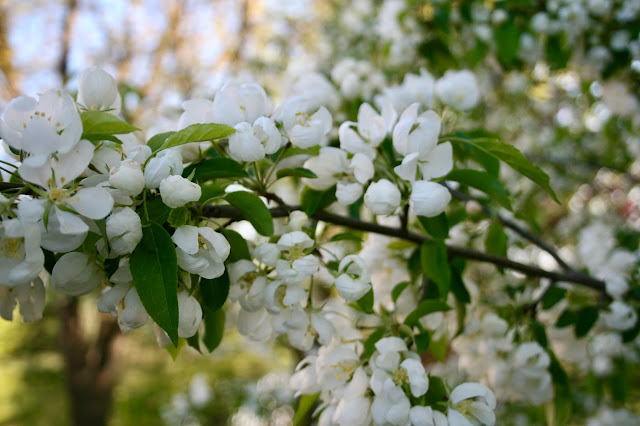 Here's is that viburnum bush as seen from the other side of the flowering crab apple trees.  See all the green stems of the daffodils on the hillside?  The few dots of yellow is what is left of these flowering bulbs. 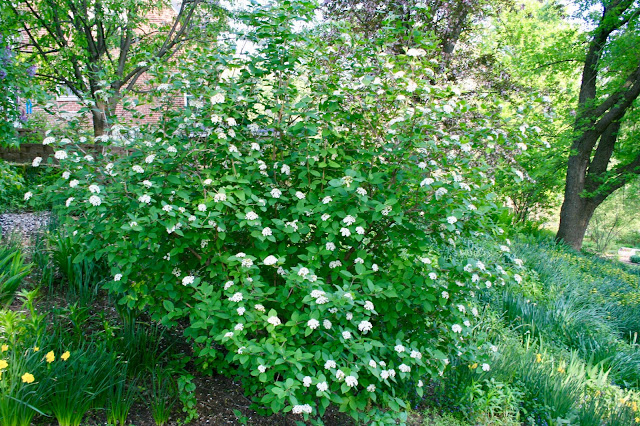 And here is a closeup of the flowering blooms. 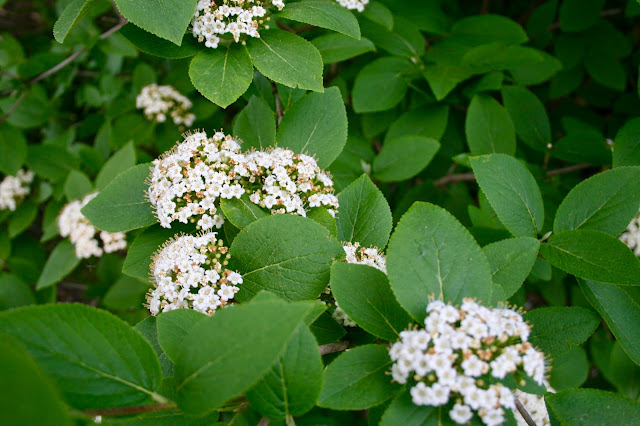 This pink flowering crab apple isn't as full as the other trees because it gets too much shade, but I love it nevertheless. 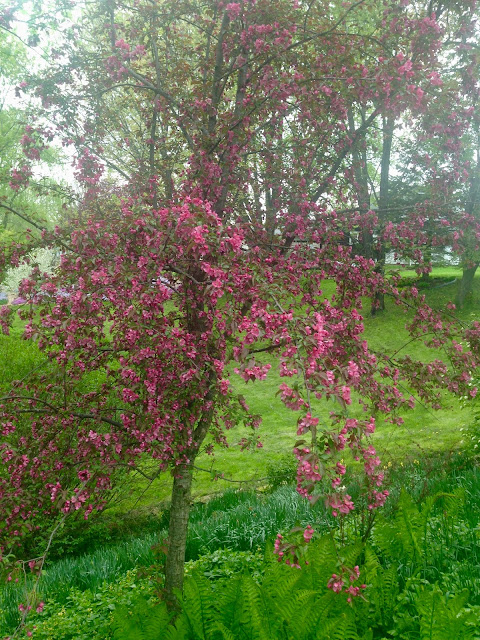 The ferns planted beneath the tree are growing extraordinarily well because of all the rain we have been getting. 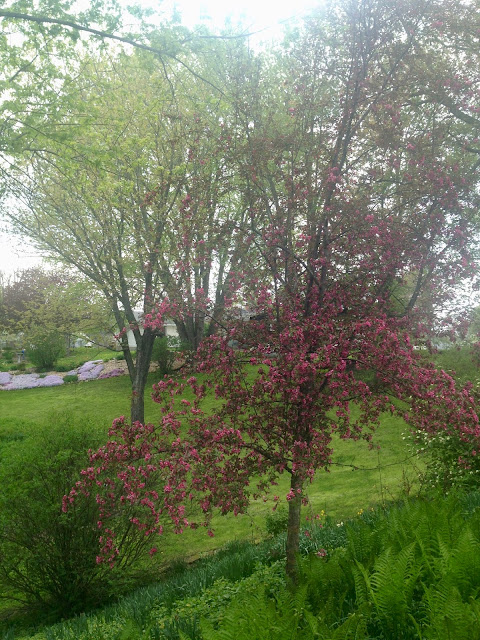 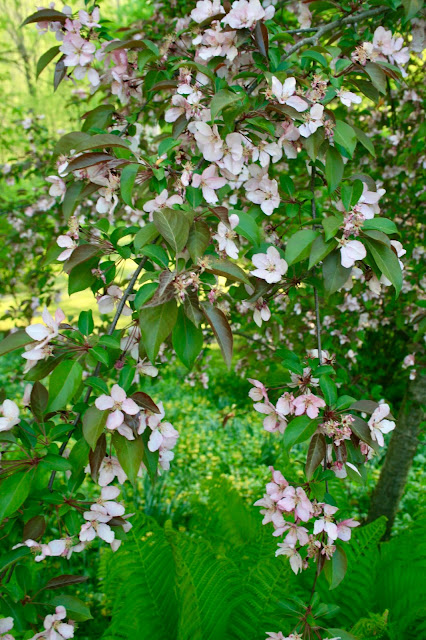 I under planted the ferns with a beautiful ivy.  They have a lovely yellow flower each spring. 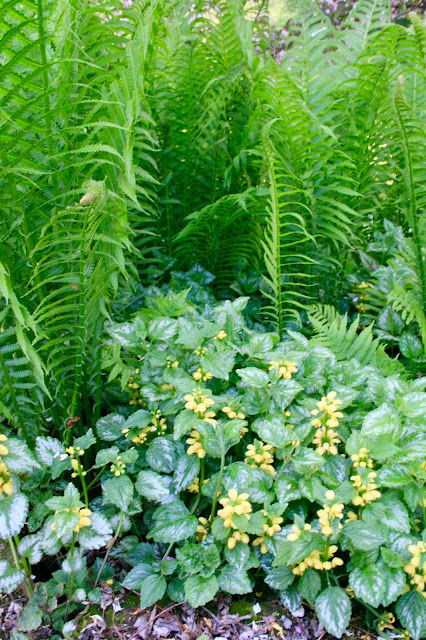 I also have a ivy with a purple flower growing right next to it.  These two ivy's though have really taken over this garden and I will have to dig it all up and toss it someday when I have the time. 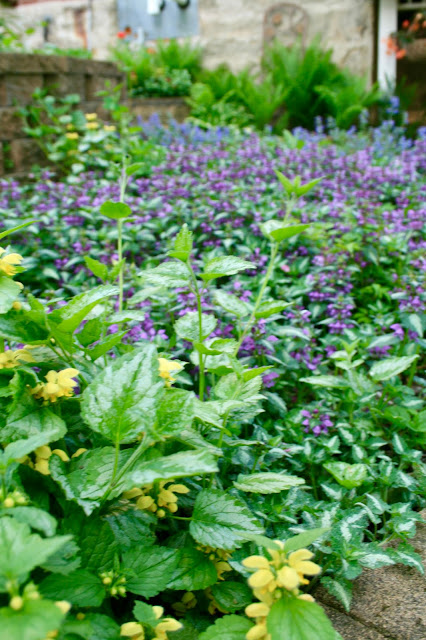 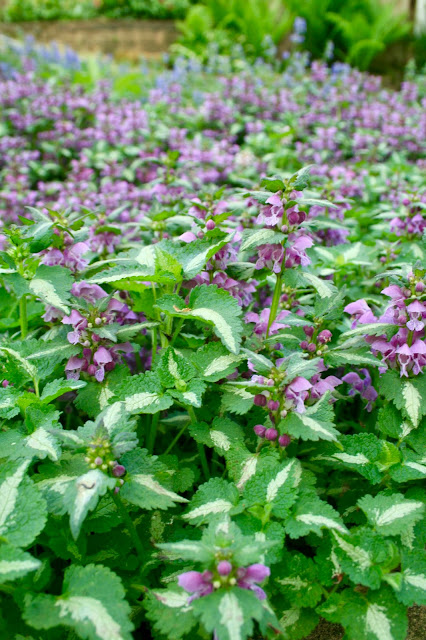 The tulips surprised me and stayed in bloom a long time this year...almost two weeks!  Most have lost their blooms by now.  The chartreuse green you see in the foreground is a ground cover sedum. 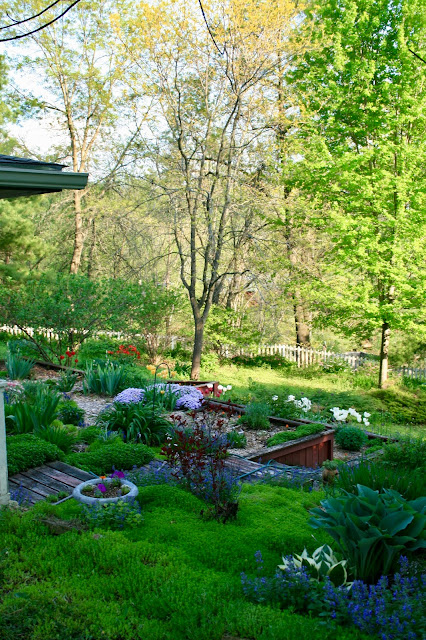 The phlox is also finishing up.  It looked so beautiful until heavy rains washed all the pretty blooms away. 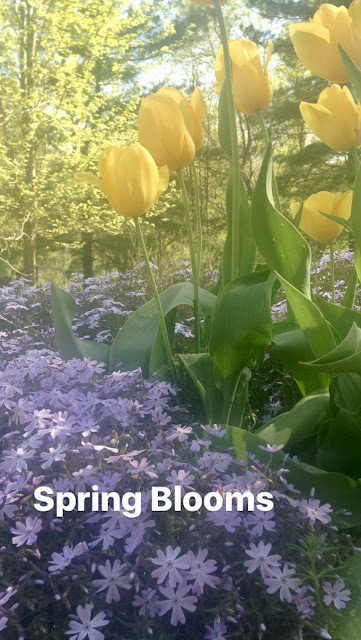 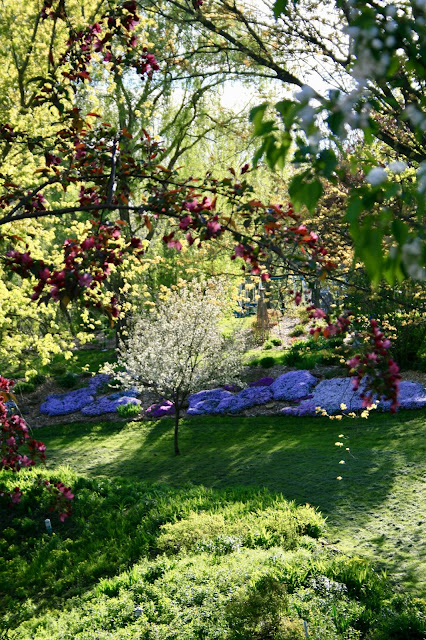 My old wooden garden steps are deteriorating, but I love the rustic look.  Eventually we will replace them with stone steps. 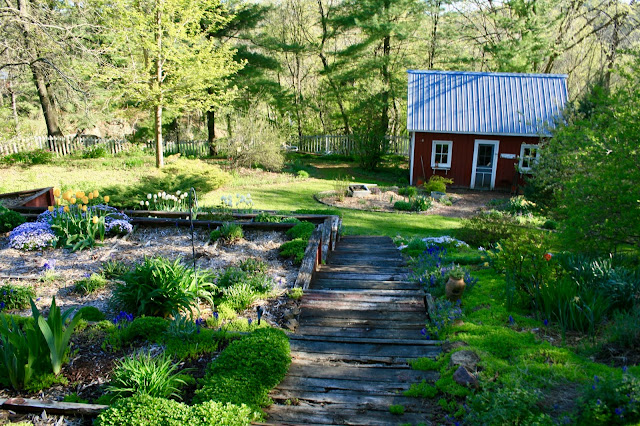 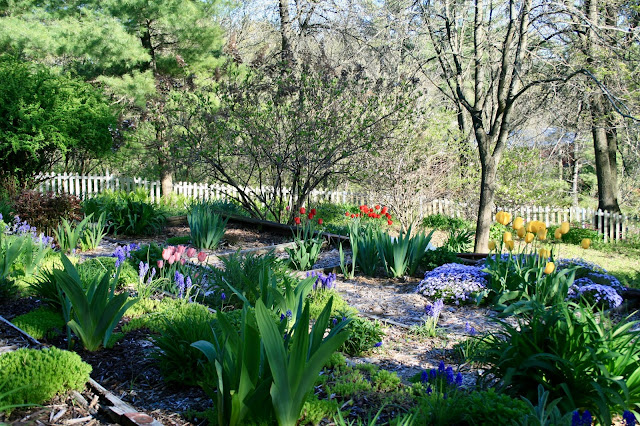 This crab apple tree we planted the year my father died in honor of his memory.  We always refer to it as "Grandpa Arnold's Tree" 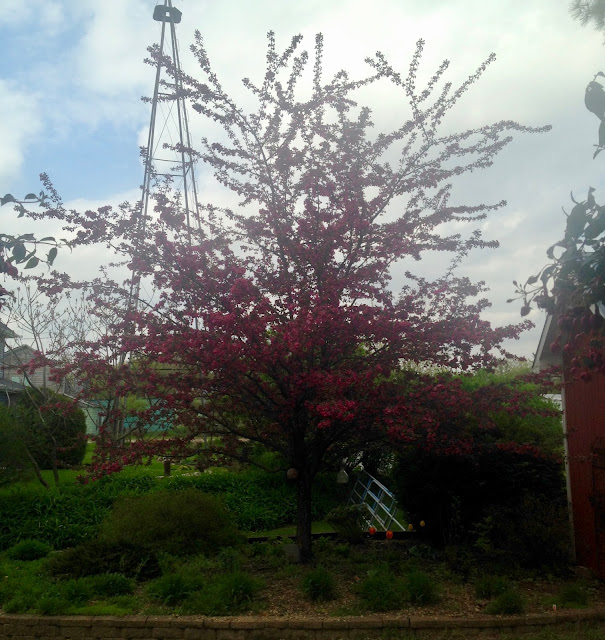 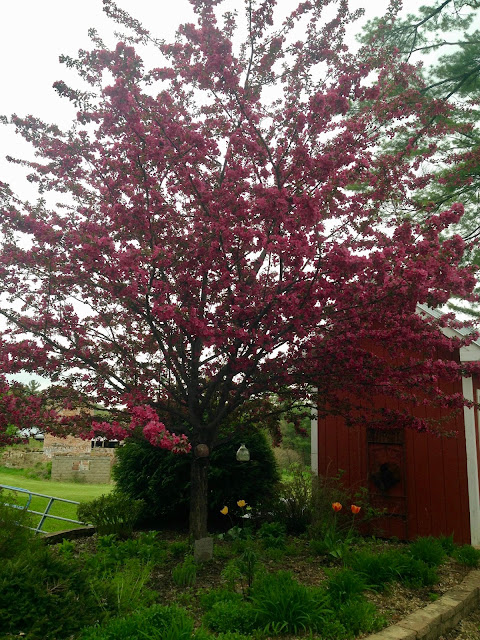 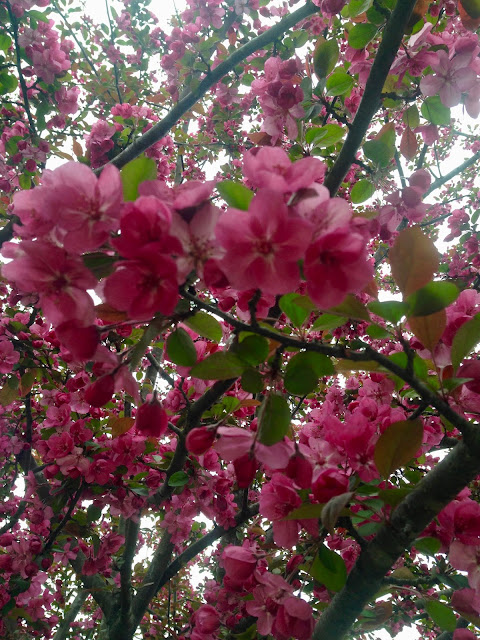 The view of my yard from the front porch. 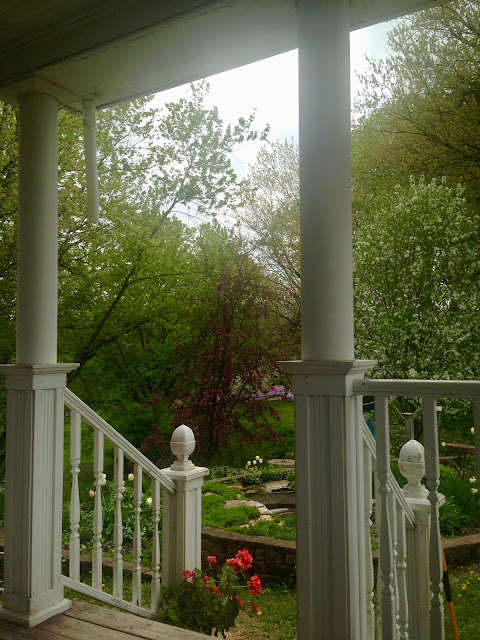 Aren't these two tulips so pretty?  They are not perennial tulips so they get less, and less every year.  Next year, I will probably only have 1 pretty tulip left.  Time to replant! 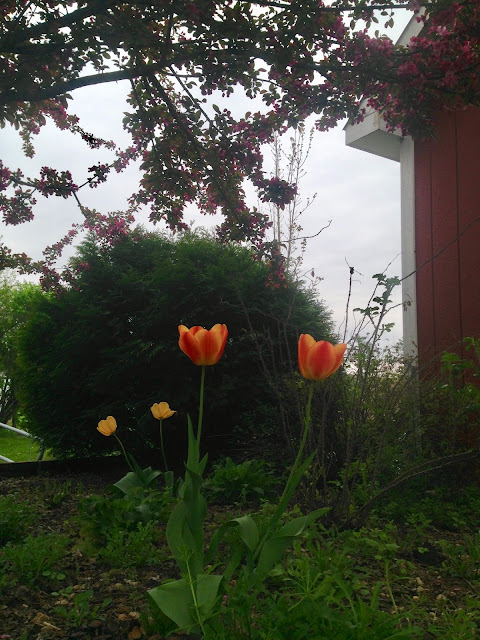 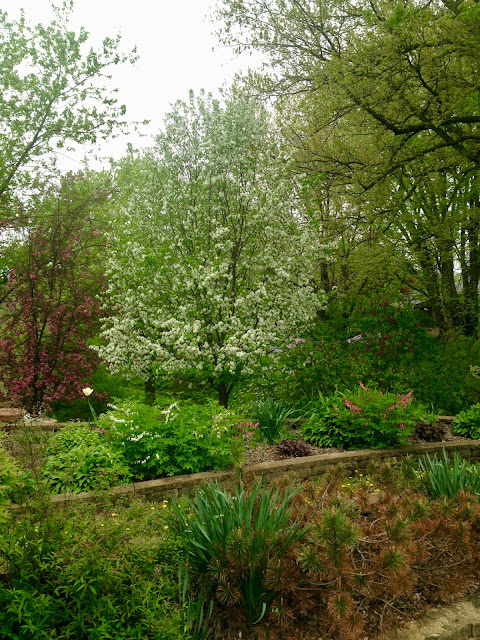 The common purple lilac bush is always the first lilac bush to bloom.  I'm still waiting on the other three varieties of lilac bushes to bloom. 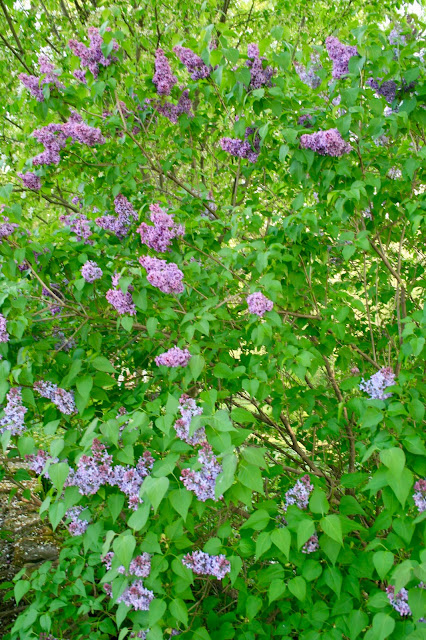 I love the smell of lilacs!  Have you ever met anyone who doesn't?  I cut a bouquet of lilacs and put them in my kitchen so I could have the scent as long as possible. 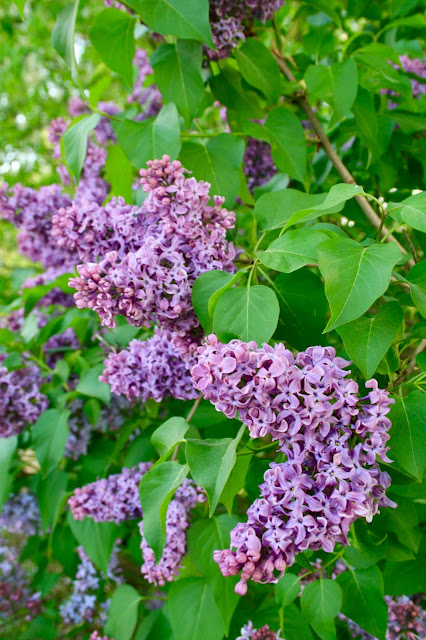 My flowering onions just started to bloom.  Hopefully I can get a better picture for you later in the week.  Most of them are not fully opened yet. 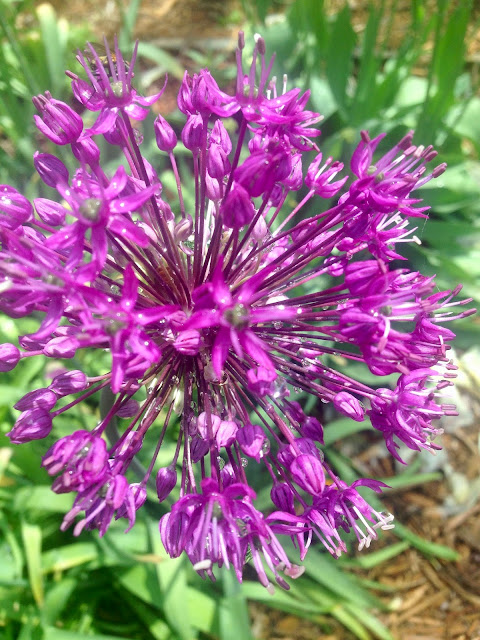 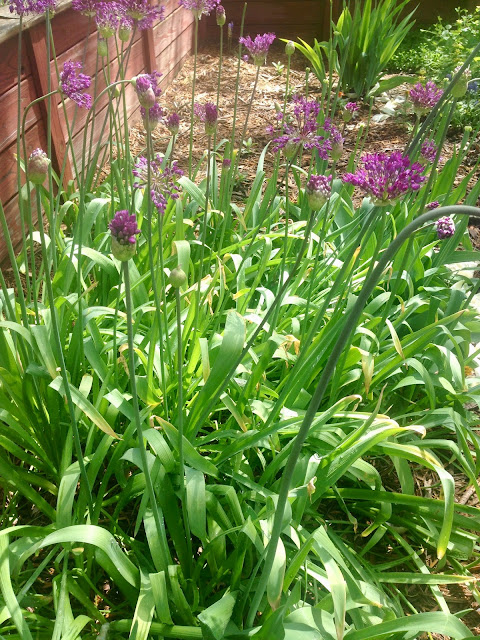 And the last picture I have is my pom-pom ball Viburnum bush.  I have two of these bushes.  They are just beginning to open up.  If it ever stops raining, I will get more pictures of these beauties when they are fully opened. 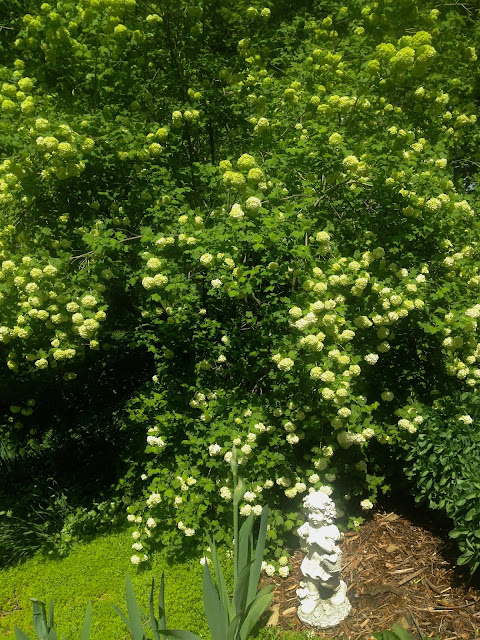