Today I have a very special post to share that I hinted about on yesterday's post.  My son is graduating from college in May with a degree in music performance, and this past weekend was his senior recital.  There were a lot of stressful months leading up to this day.  He chose some very difficult music to play, and incorporated a lot of different percussion instruments and techniques into his recital.  There were many times when he worried he wouldn't be able to pull it off.  And I, as his worrisome mother, was stressed out and worried for him.  But after much prayer, and diligent practice (some days rehearsing for over six hours!), he not only pulled it off, but many people said it was the best senior recital they ever attended. 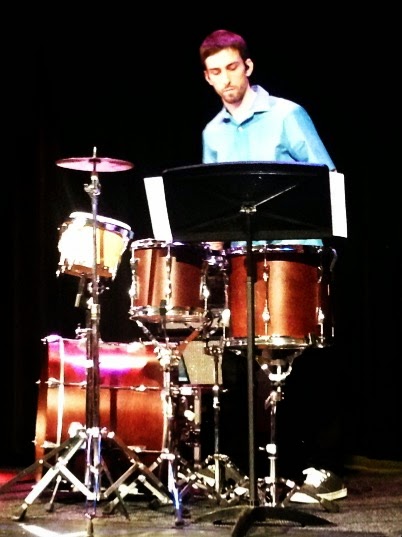 To make the day even more stressful, Jordan was responsible for hauling and setting up three different drum sets, two keyboards, a xylophone, and eight music stands from one building several blocks away to the performance chapel.  He started moving things at eight a.m. pushing a xylophone down the city streets by himself.  I was worried he'd be exhausted before his recital even began!  My husband had to teach Sunday School, so we weren't able to leave until 10:30 to help him.  We arrived in Minneapolis after noon and with a brief break for lunch, we were moving and setting up equipment until right up to when the recital was about to start at 3:00.  Below is a picture of my muscular husband helping Jordan and my son-in-law Jason lift the Xylophone onto the stage. 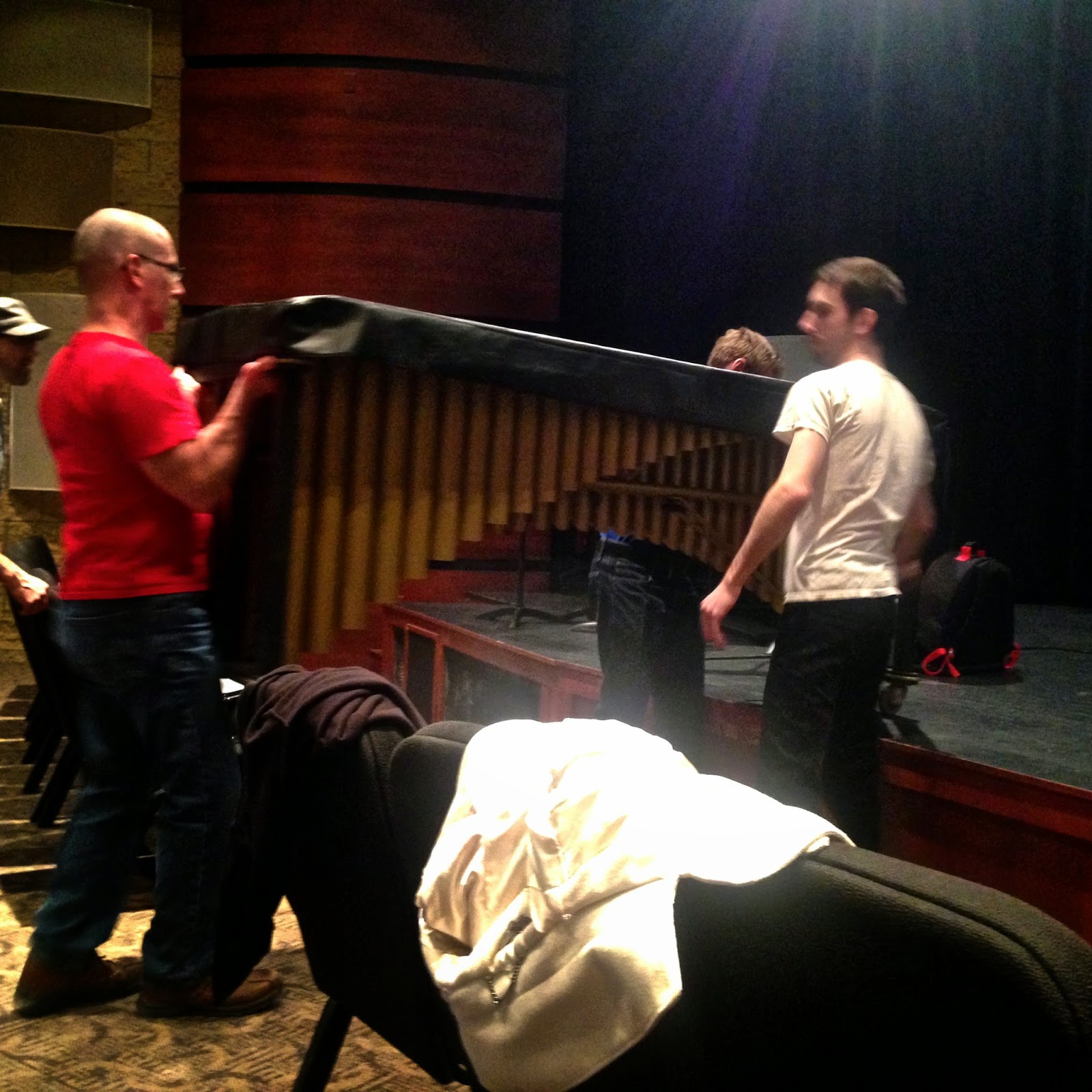 Once the majority of the heavy lifting was done, Jordan had to grab some lunch so the three of us hung out in a recreational area to relax a bit.  The boys played ping pong, while us ladies checked our emails and took some fashion photos. 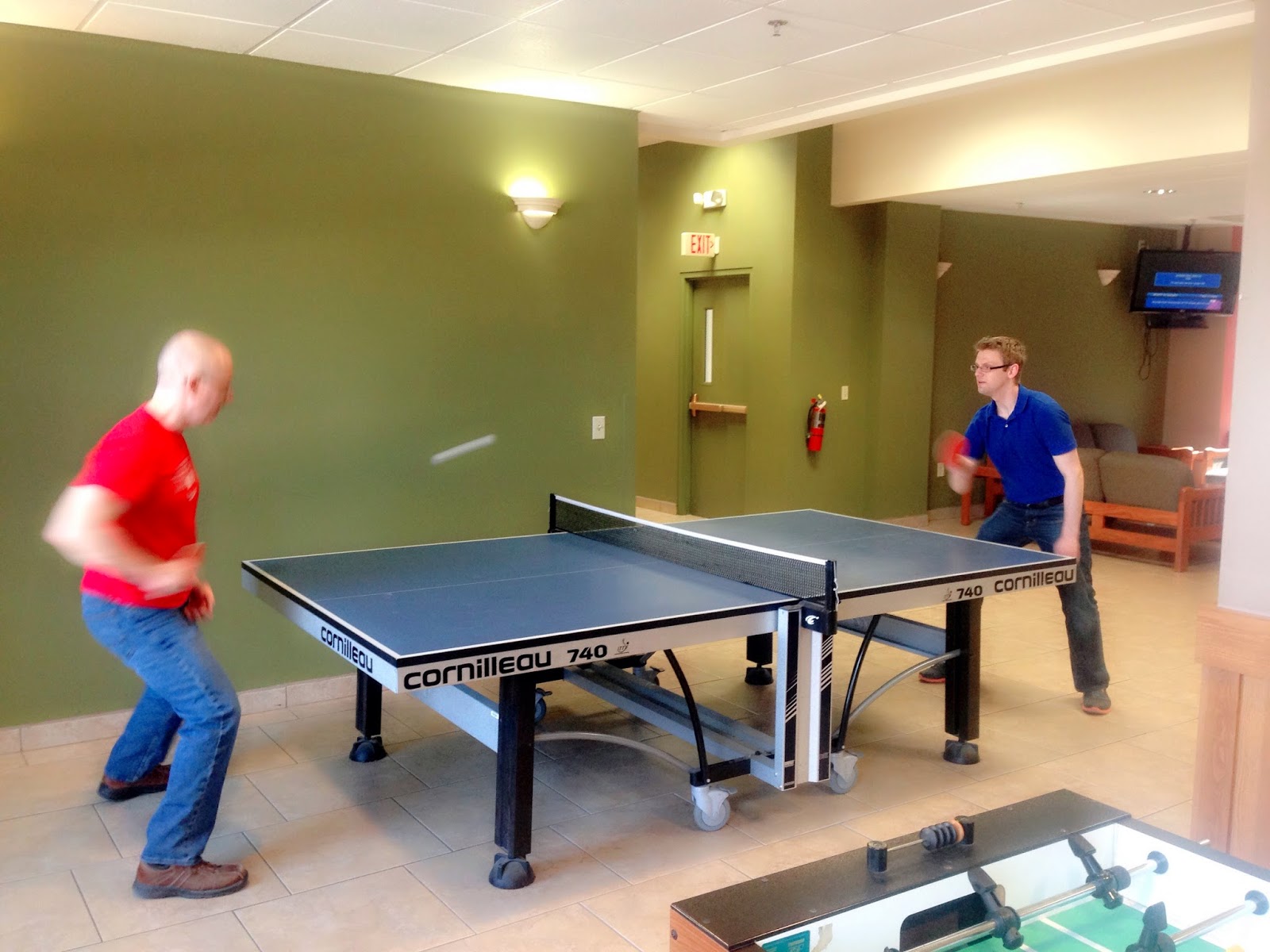 This is my beautiful daughter Ashley. 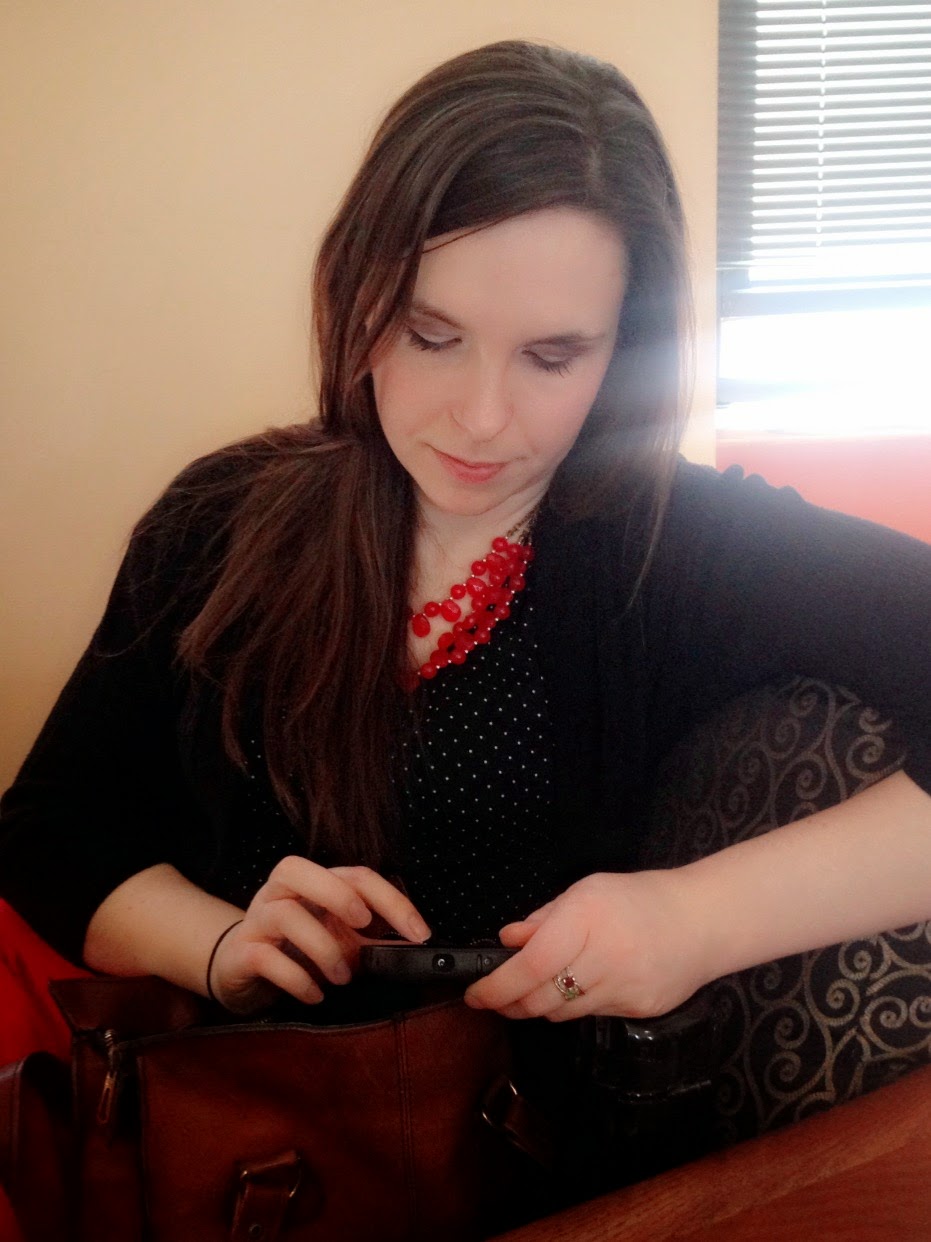 Jason of course couldn't resist getting in on the fashion photo session.  Remember my Fashion Cameo's post HERE?  My family loves to tease me and sneak in on the photographs.  I love Jason's fashion forward stance and how his blue shirt matches my outfit! :) 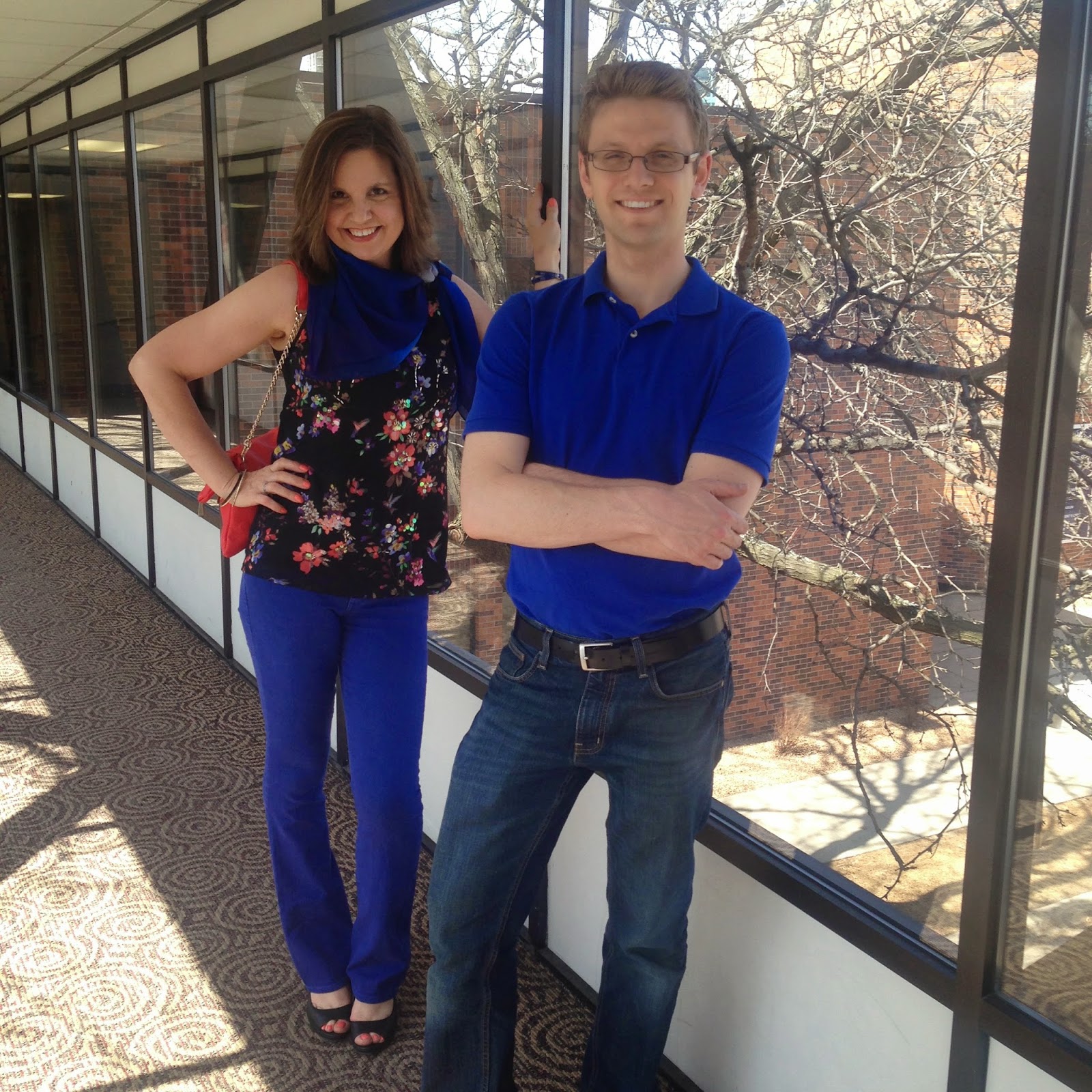 After our brief moment of food and relaxation, we went back to the concert hall where Jordan continued preparing the finishing touches for his recital.  While he was doing that, I got a little choked up reading his program. 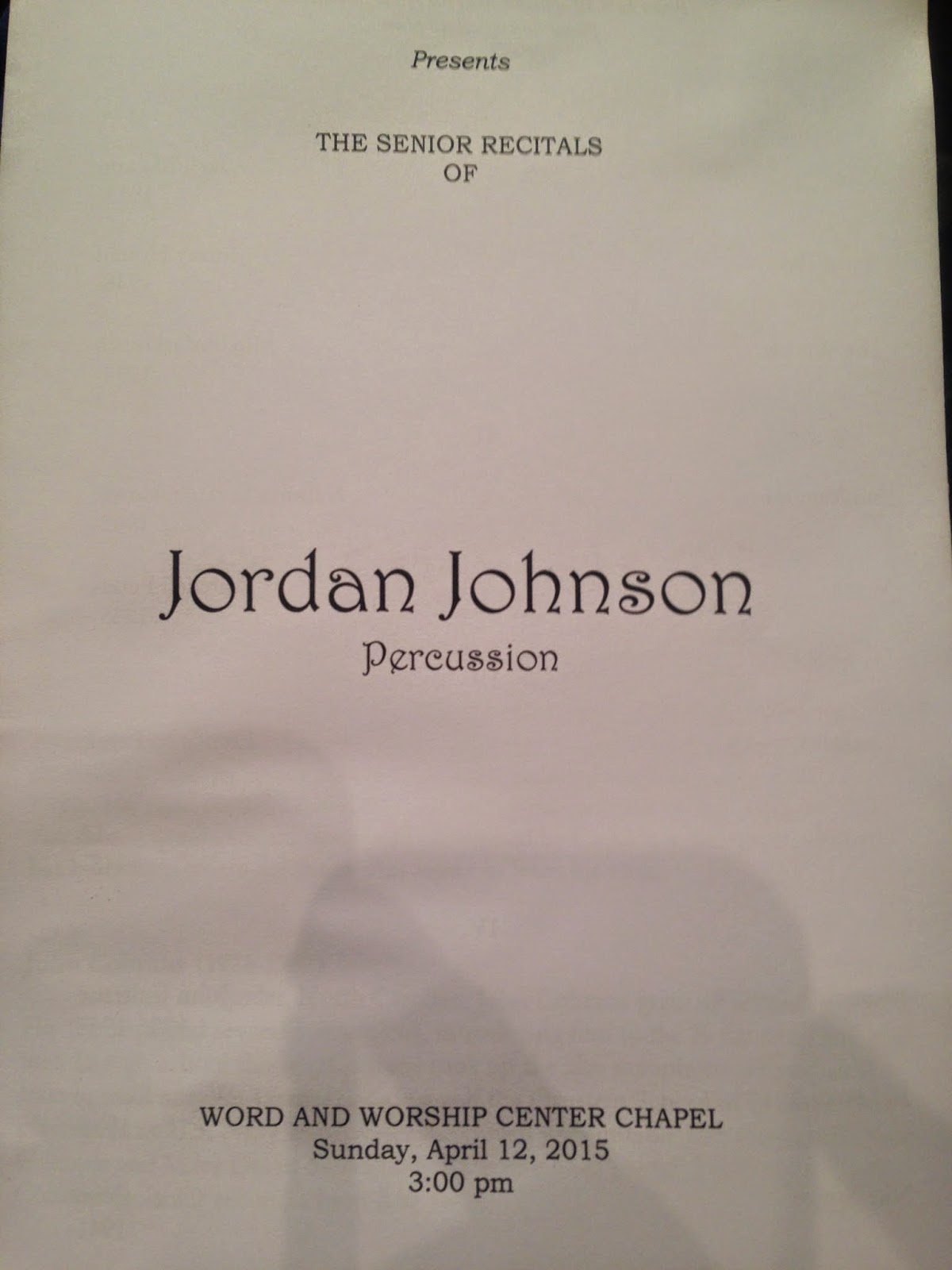 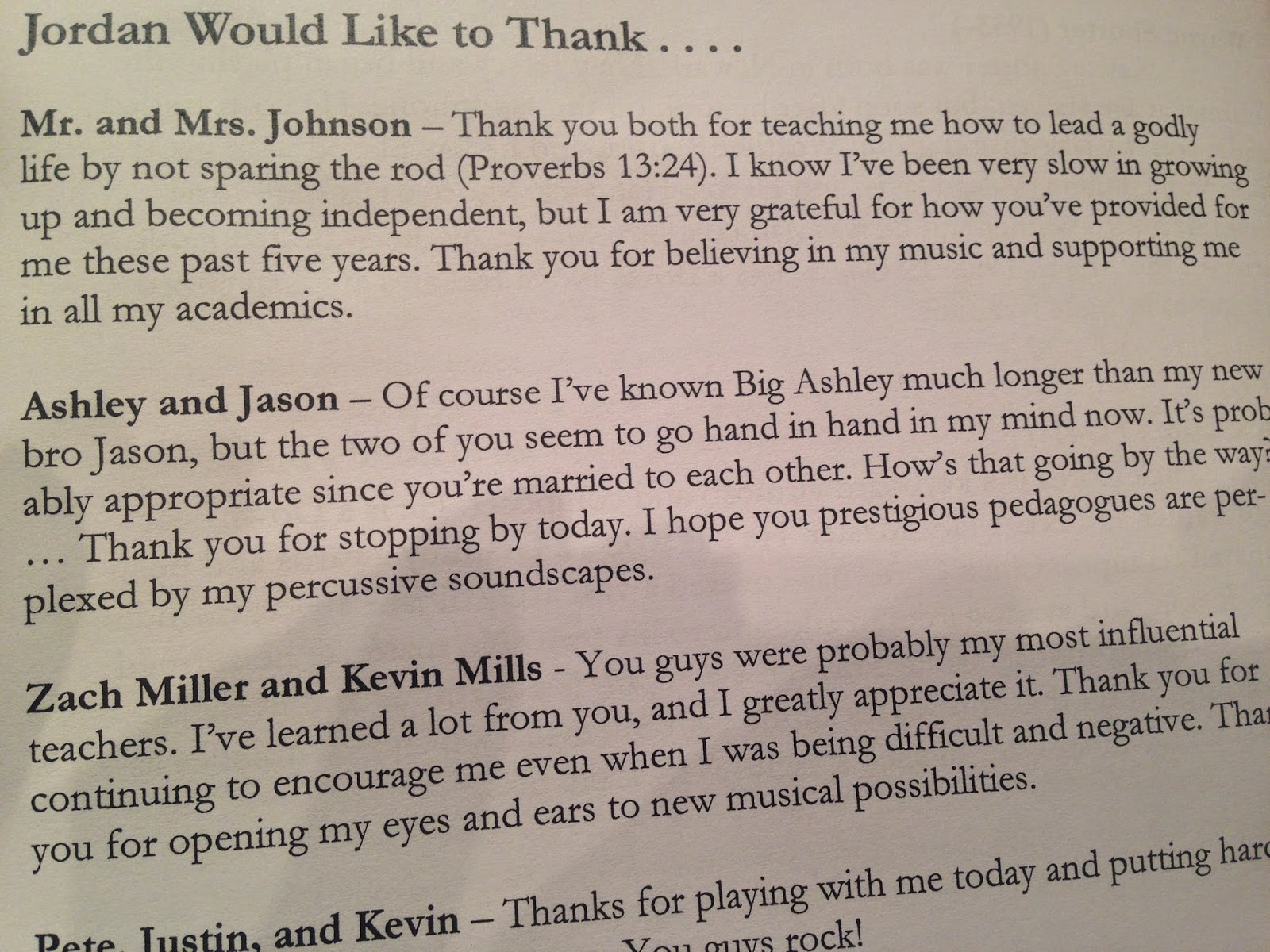 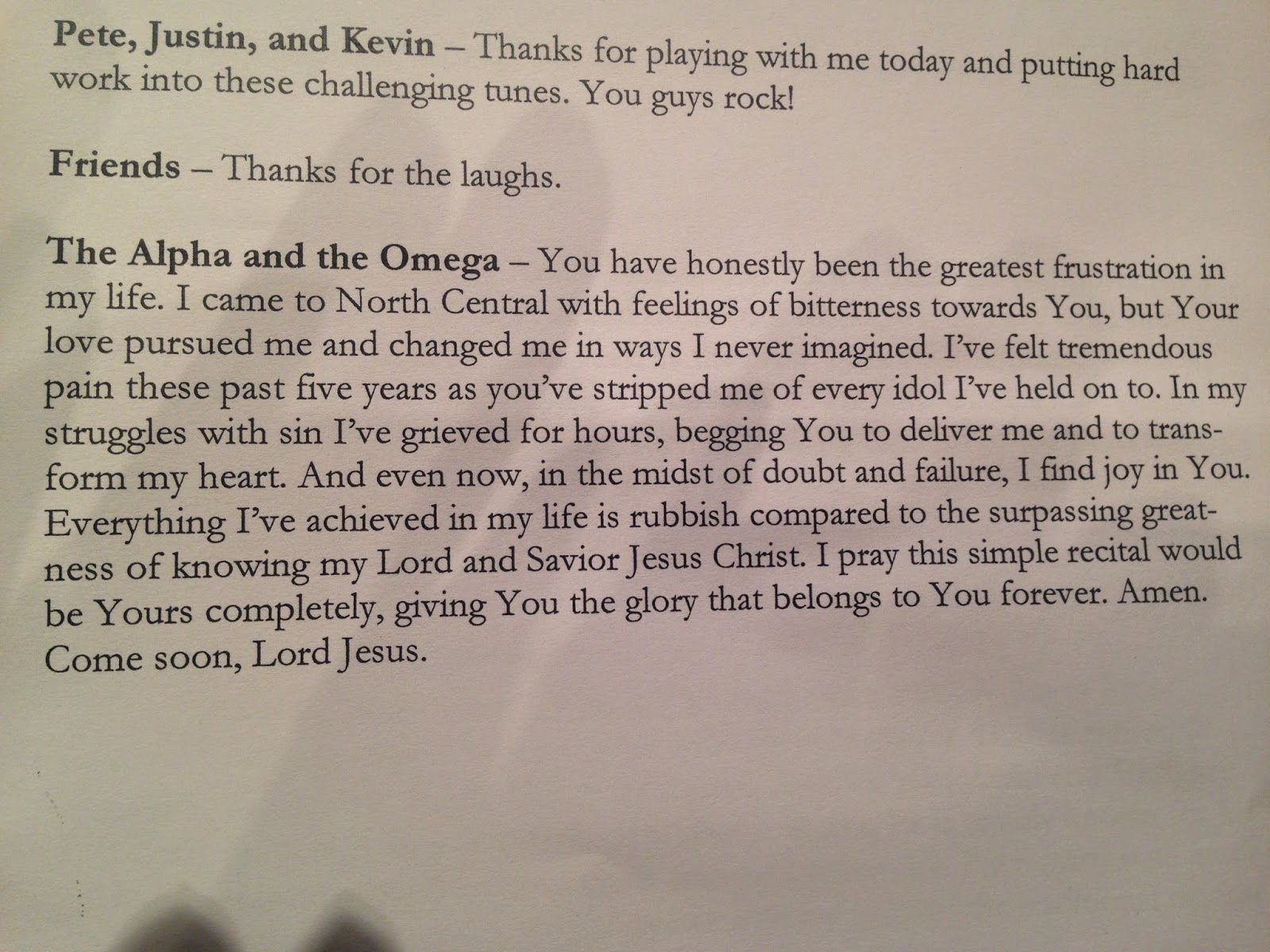 My son has many amazing qualities but the two I have always appreciated the most are his honesty and his humbleness.  Having two children who have been seriously involved in music their whole lives, and also my experience as a theatre arts student and worship team member for over twenty five years, I've met a lot of arrogant musicians in my life.  Humbleness as a musician is a rare quality.  Jordan is so gifted musically, and yet, he still remains so humble and has a good perspective regarding the use of his gifts. 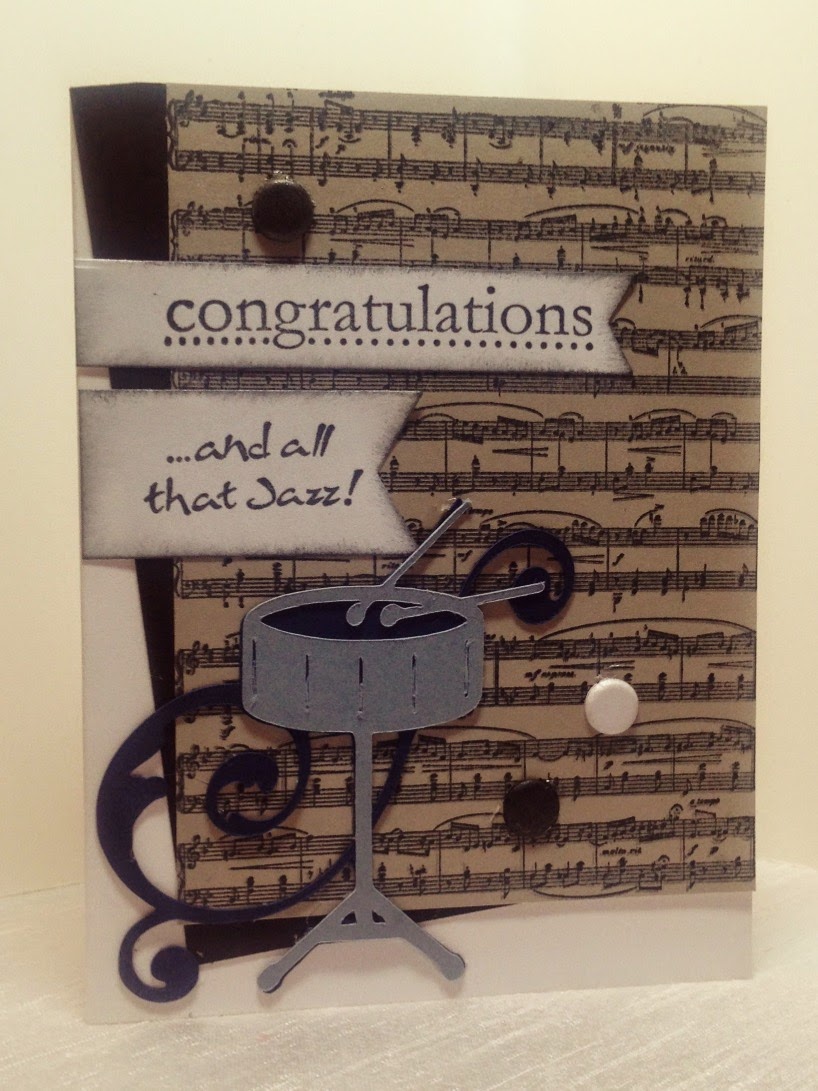 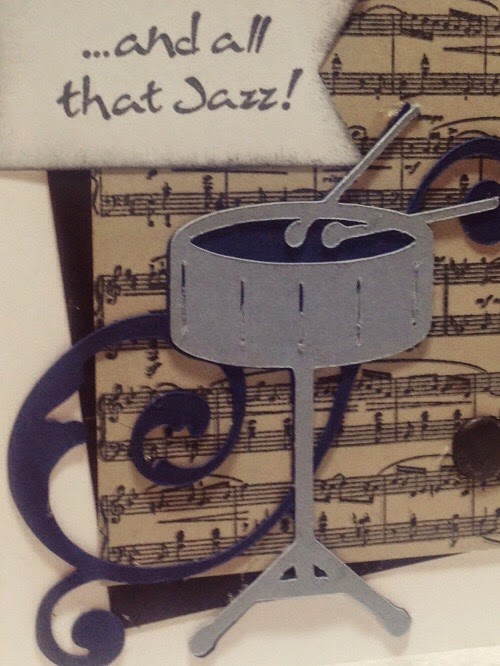 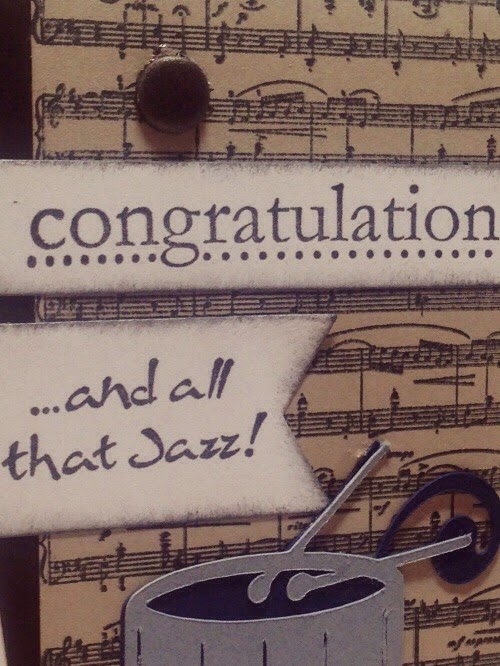 After the recital was over, it was time for praise, celebration, gifts, cards, and photographs.  I gave him the card above which I made with my Cricut machine and old retired SU! and Stampendous  stamps.  Jordan said it was the best card he ever saw!  I think he really liked the sentiment because  his recital was primarily jazz music.

To make the card I first stamped 'Musical Score' from Stampendous onto a sheet of Sahara Sand card stock.  I then adhered that sheet onto a piece of black card stock, and finally onto a white card base.  The sentiments are from retired Stampin Up! 'Congrats' and 'All that Jazz', and I used an MFT die to cut the banner shape.  I sponged some black ink onto the edges to make them pop more.  My main image was cut using a Cricut machine and the 'Quarter Note' cartridge.  It was cut twice:  once in Not Quite Navy and once in Bordering Blue.  Candi Dots were added for embellishment. 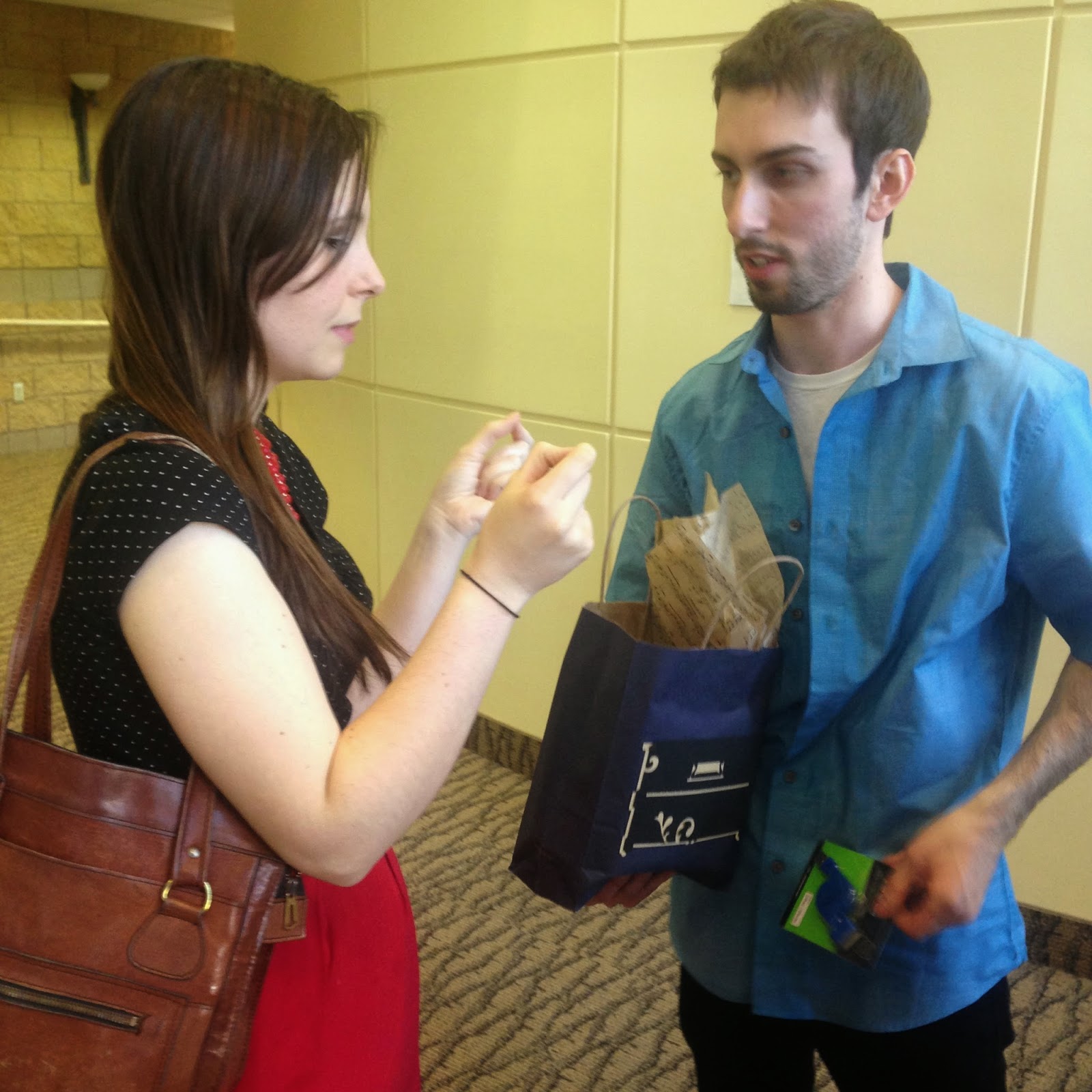 Ashley and Jason gave Jordan an I Tunes gift card, some computer thing I don't understand, and some candy.  Ashley made the gift bag using the same Cricut Cartridge  I did for my card. 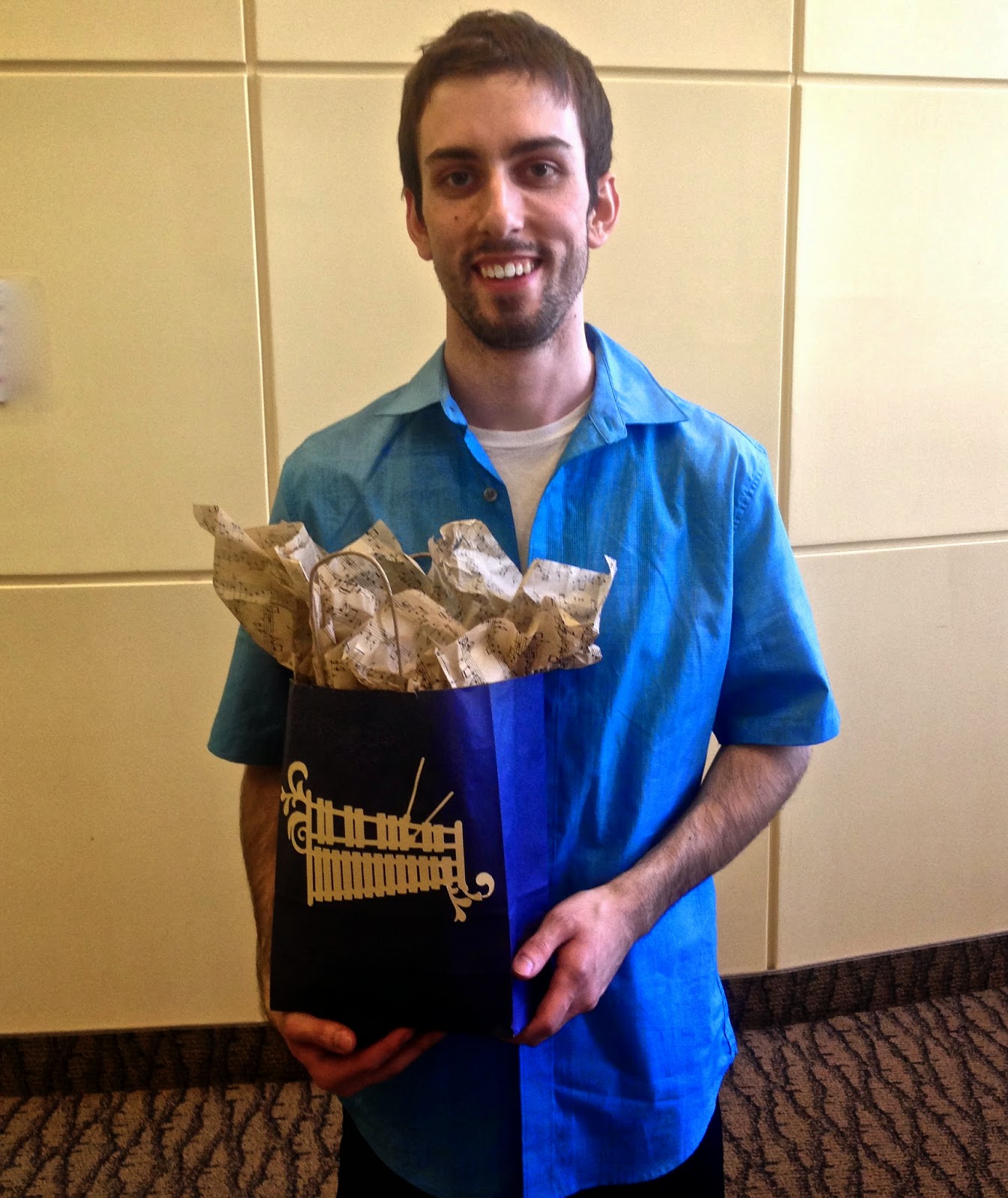 To make her pretty bag, all she did was take an old Zara bag, and covered up the word 'Zara' with her Cricut cut outs.  She used a piano image on one side, and a xylophone image on the other. 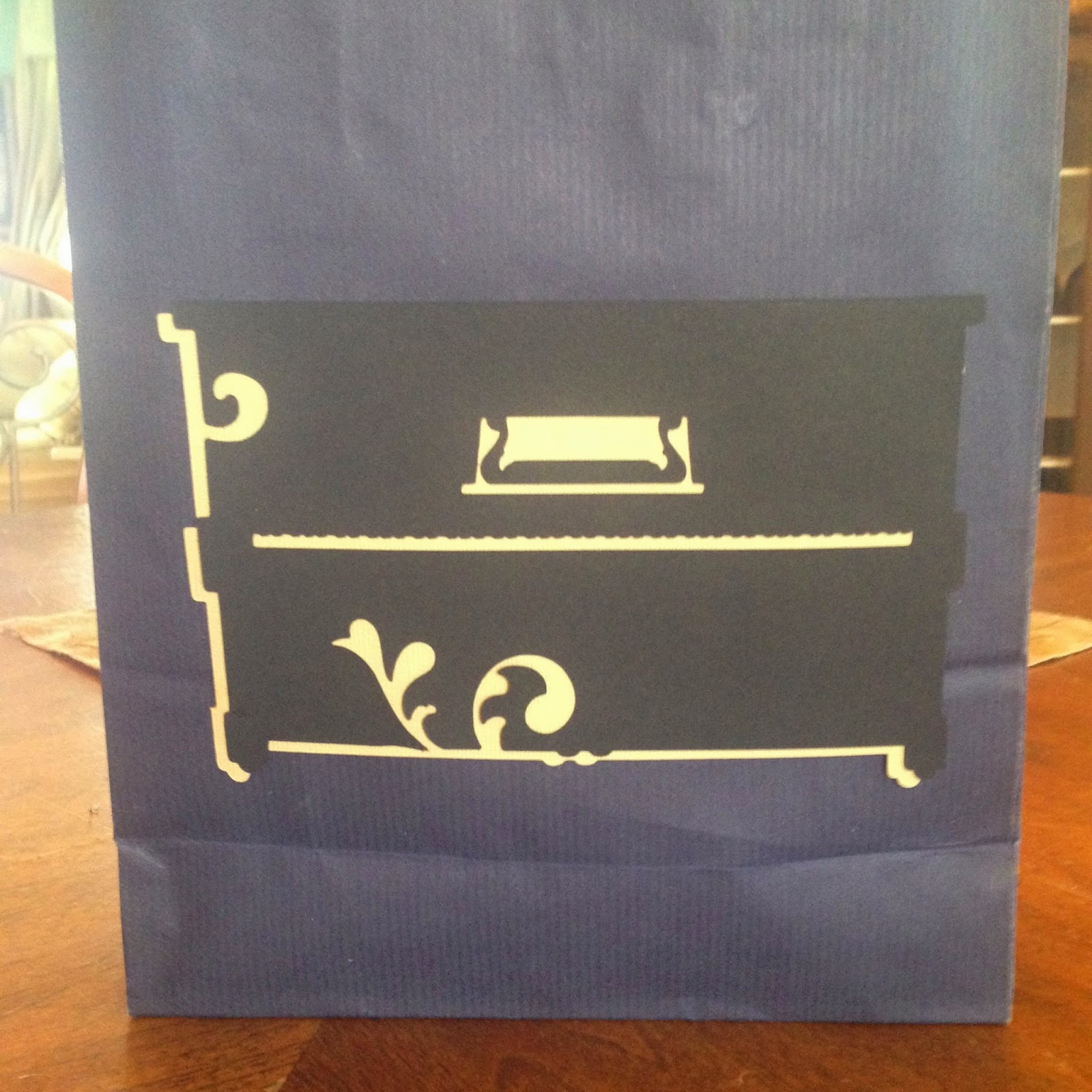 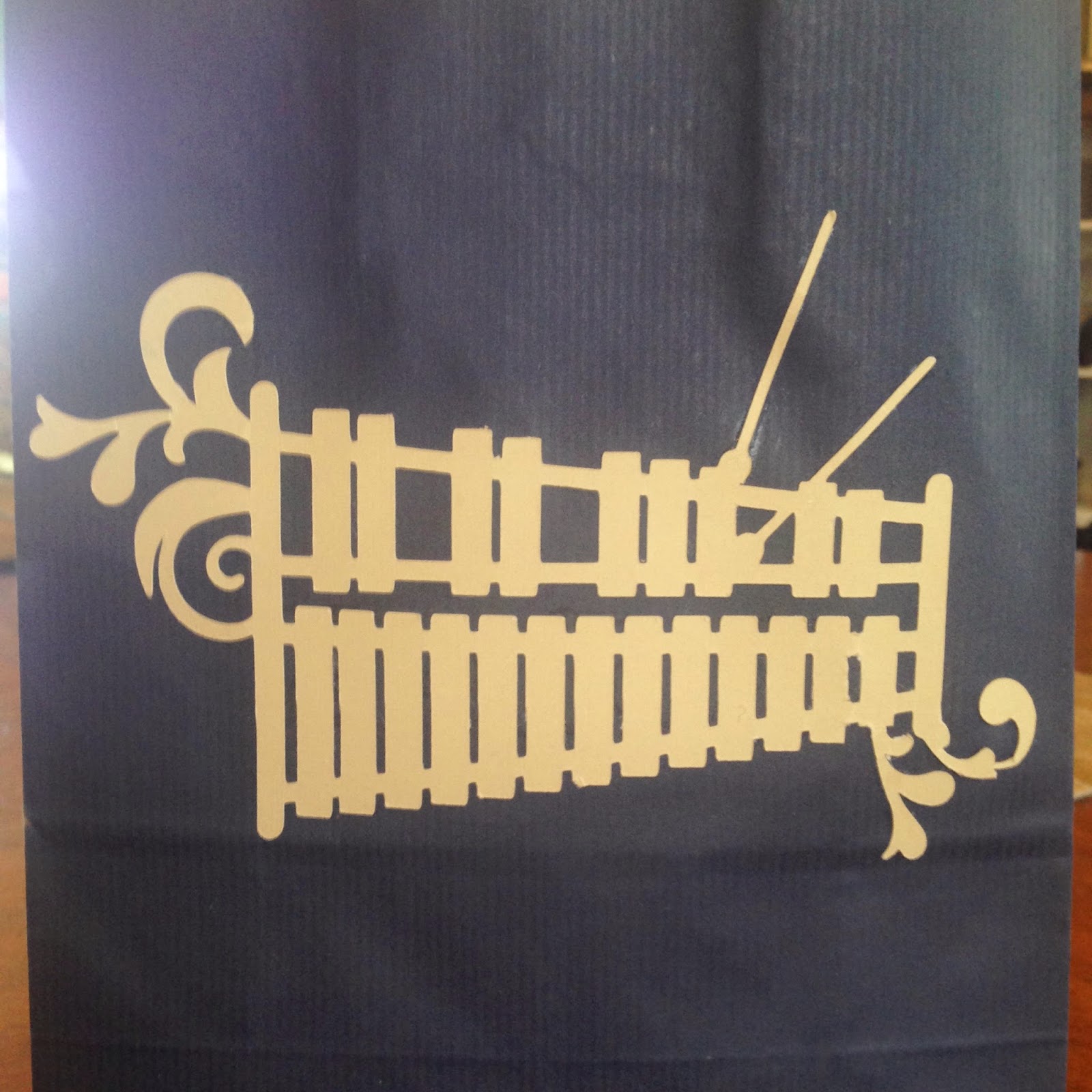 Some pretty musical tissue paper was the finishing touch!  It was a great way of re-using and re-purposing an old bag! 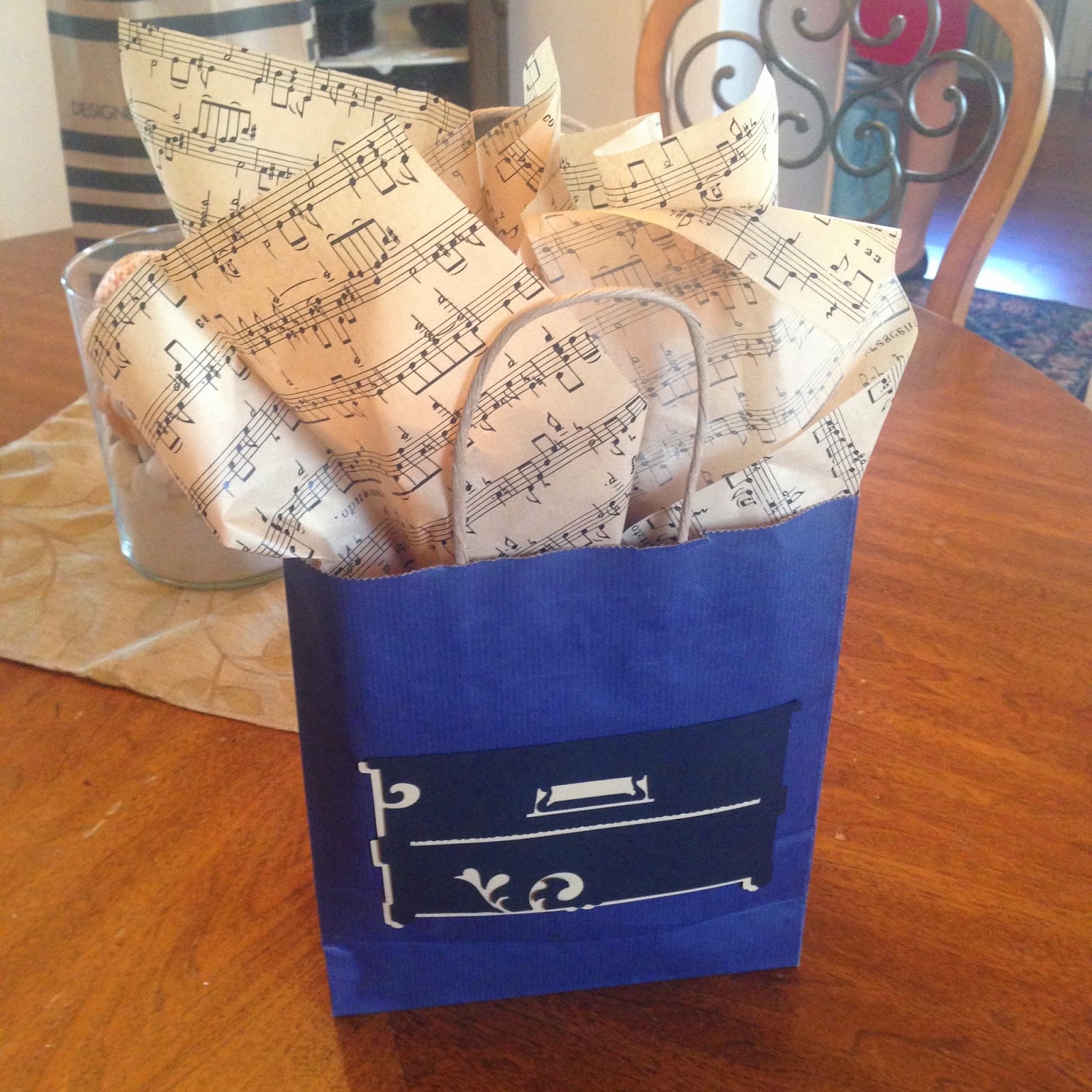 Here is Jordan playing a piece on the xylophone using four mallets.  He said his hands were sweating so much, he almost lost control of the mallets for they were slipping out of his hands. 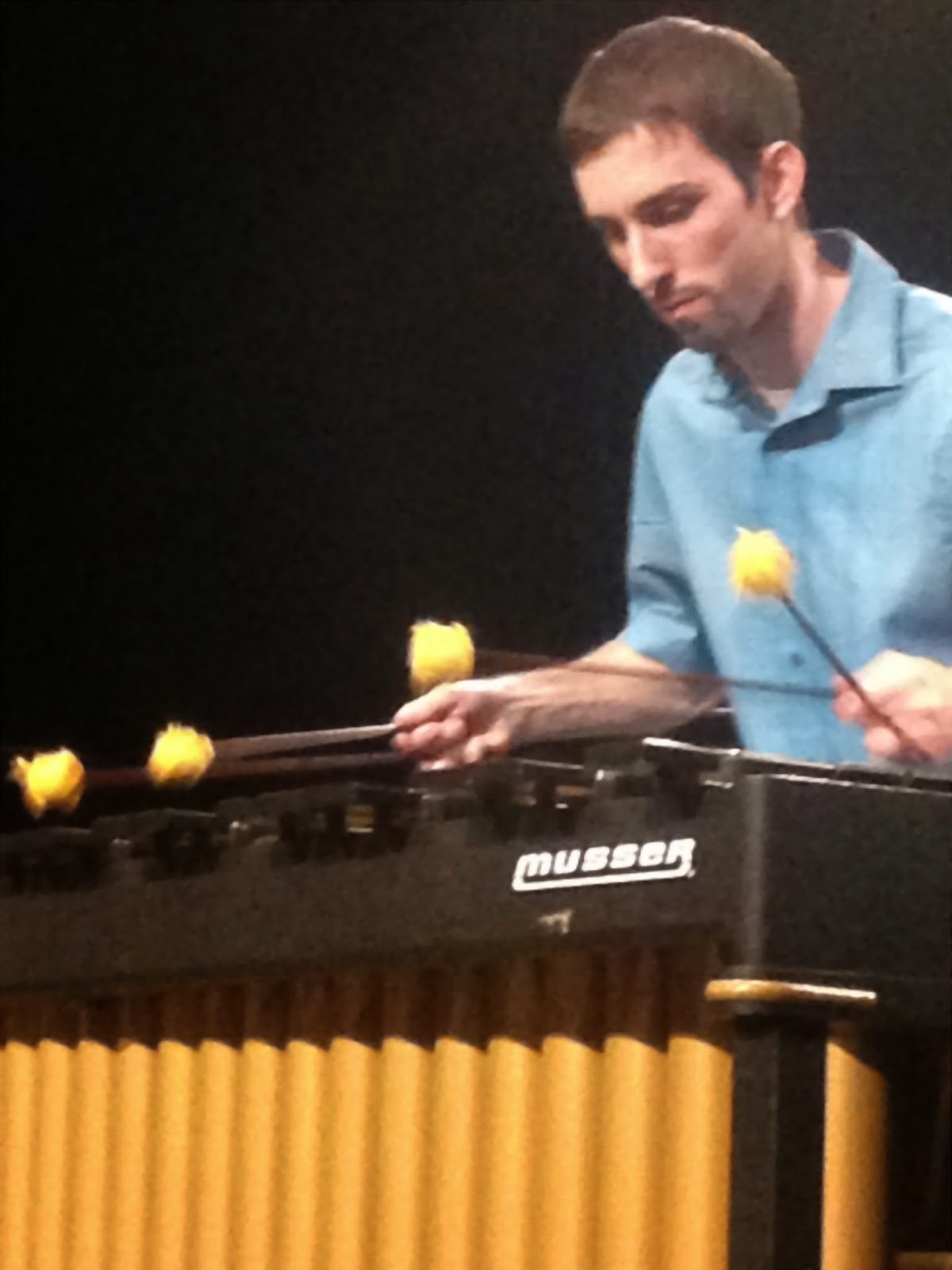 We will be putting his entire recital on YouTube eventually, but if you would like to hear him play one song, this one has already been posted HERE. 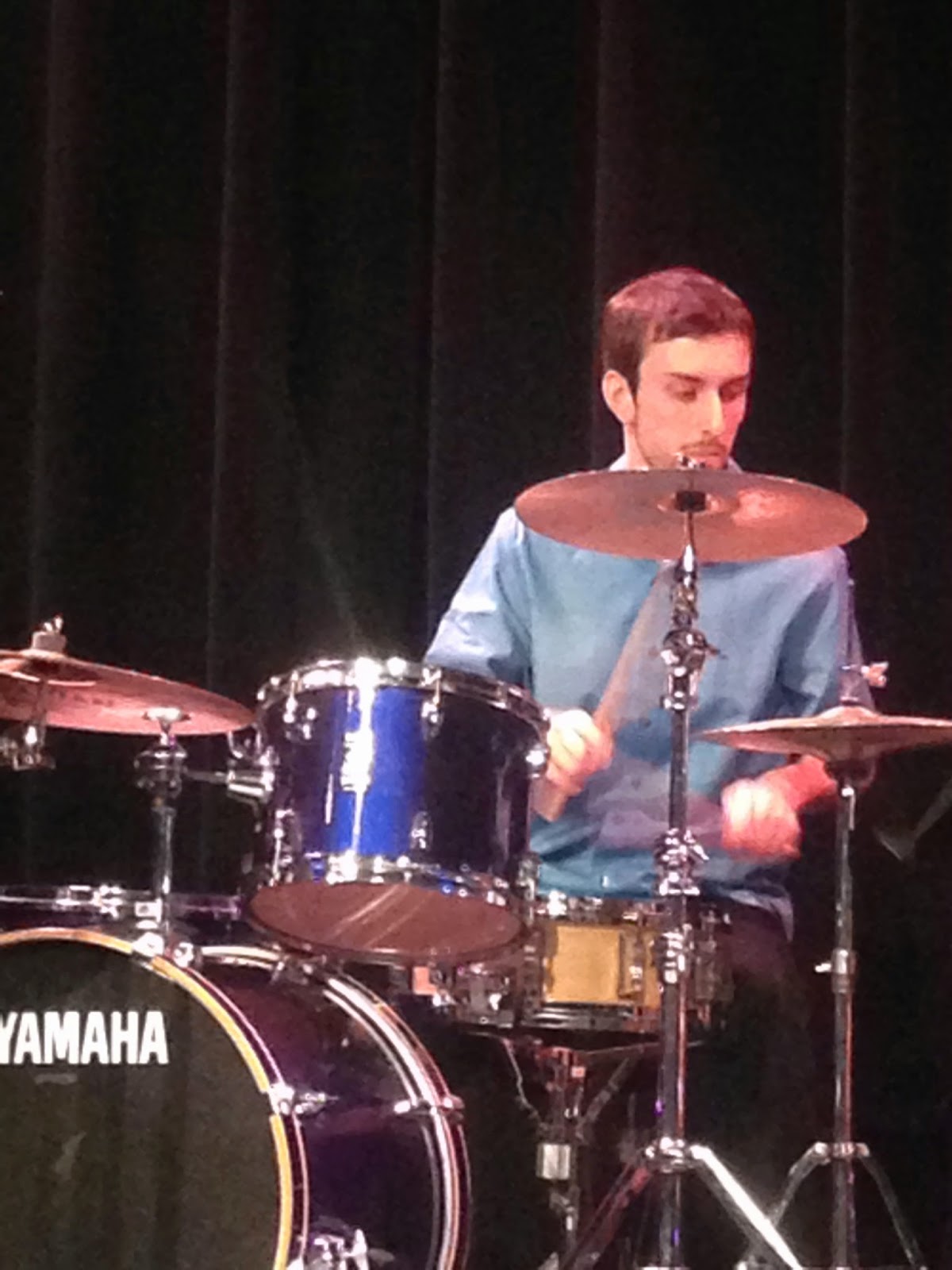 Our family photo with the star in the center! 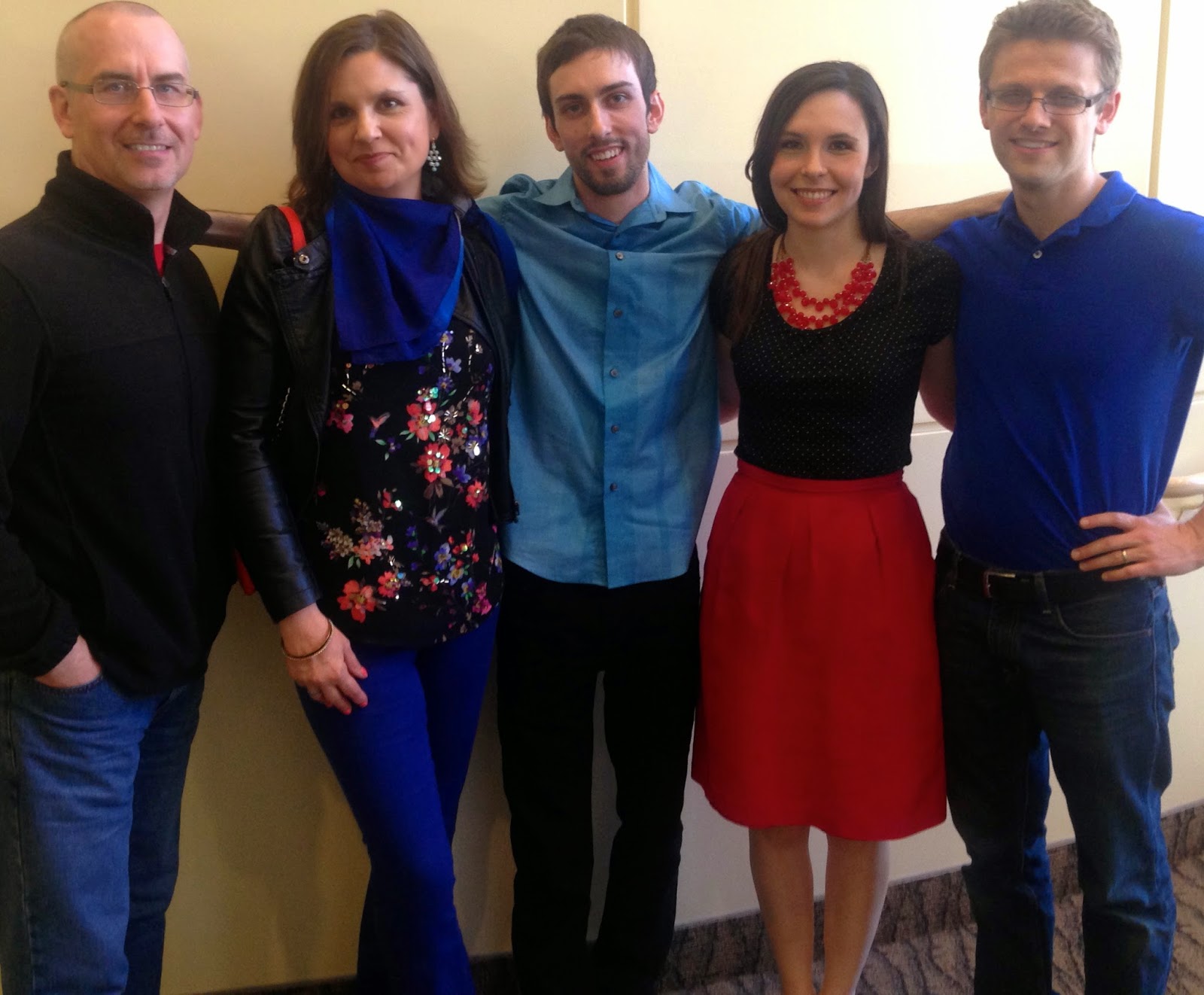 Jordan with his two favorite teachers that have had the biggest influence in his life at NCU.  His professor Kevin Mills on his right and his drum teacher Zach Miller on his left.  Both men have been instrumental in not only helping him develop his skills as a musician, but also helping him to grow spiritually and emotionally as well. 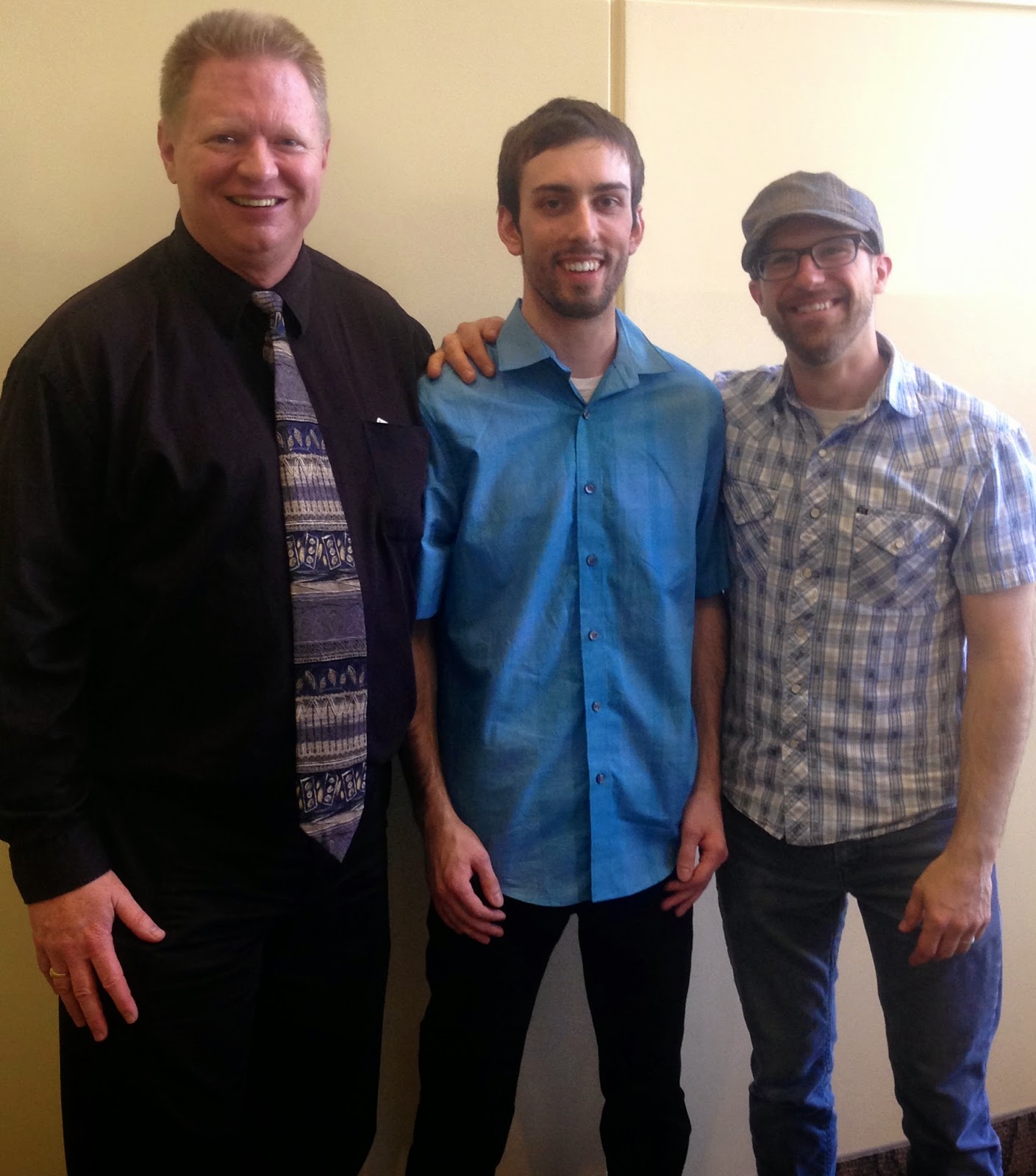 After all the 'congrats' were over, we said our goodbye's to Ashley and Jason for they had a six hour drive back to Chicago ahead of them.  That left me, my husband, and Jordan to pack up and move all those musical instruments back to the music building by ourselves.  And that is why I got a blister on my foot and had to take my heels off and walk barefoot as I stated in yesterday's post.  My husband however, is a genius packer, and he was able to pack all three drum sets into our small Chevy Malibu so we were able to make it in one trip.  Of course, there was no room in the car for Jordan and I, so we had to walk there.  It was a beautiful day, so other than my sore feet, I enjoyed it!

When we were done cleaning up, we headed to our favorite Minneapolis restaurant to celebrate:  Buca di Beppo.  We absolutely love the food, and environment of this restaurant.  Many celebrities have visited this restaurant and their pictures and autographs are all over the walls.  One time we went there after seeing a musical, and got to see the cast there enjoying dinner as well.   That was a neat experience!

We always order the same thing:  Spaghetti with Meatballs and Lasagna and then we share it.  This time however, I decided to try a Raspberry Italian Soda.  It cost $4.00 but it was worth it!  I loved it!  It didn't taste like your typical U.S.A. drink:  it was carbonated water with raspberry flavoring.  It was absolutely delicious.  Now I will want one every time! 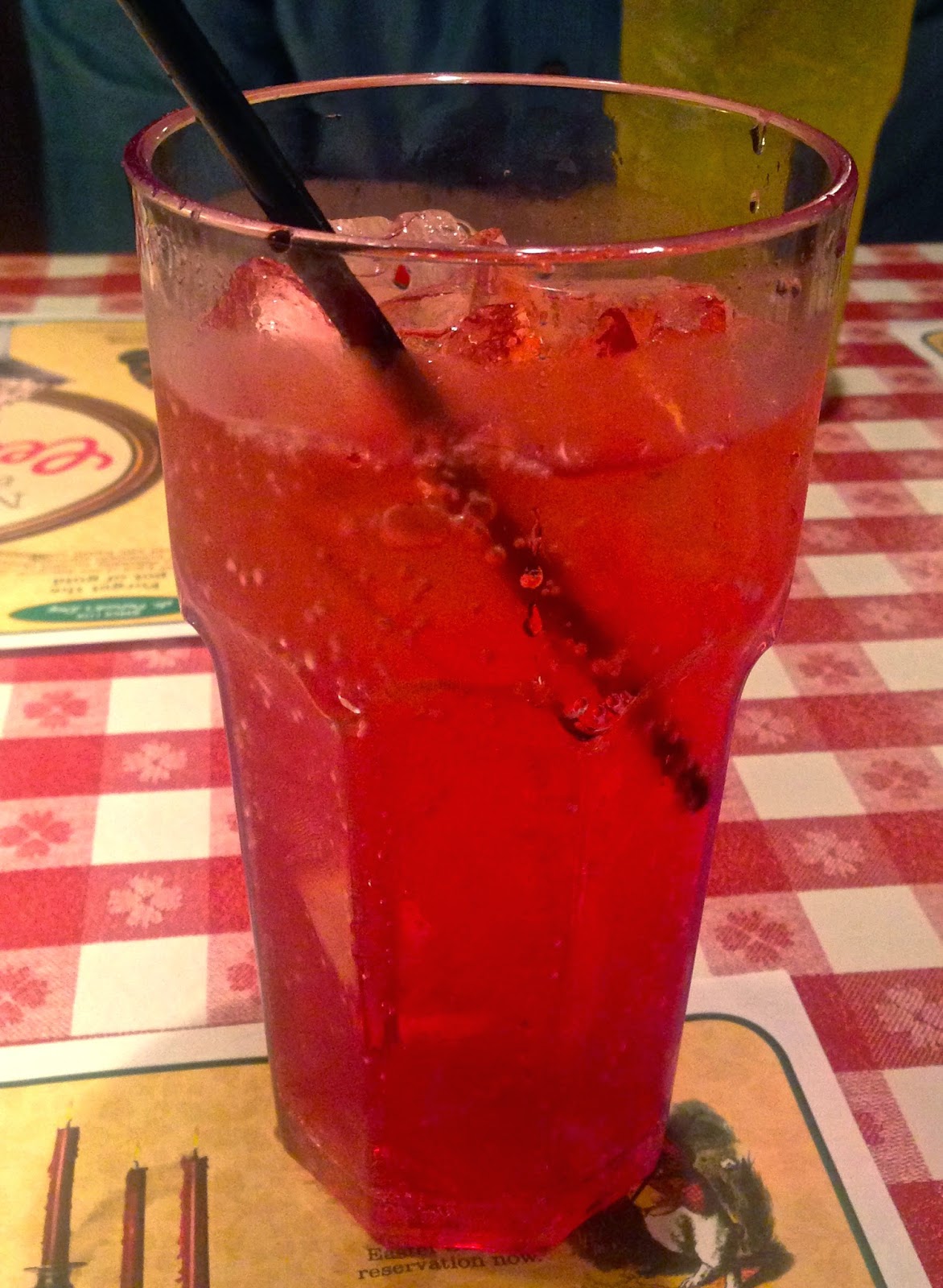 My silly boy started eating right out of the serving bowl!  I said 'Jordan, you scoop a portion out and put in on your plate!'  Apparently he thought it was all for him.  It was such a huge serving, we even had leftovers the next day too! 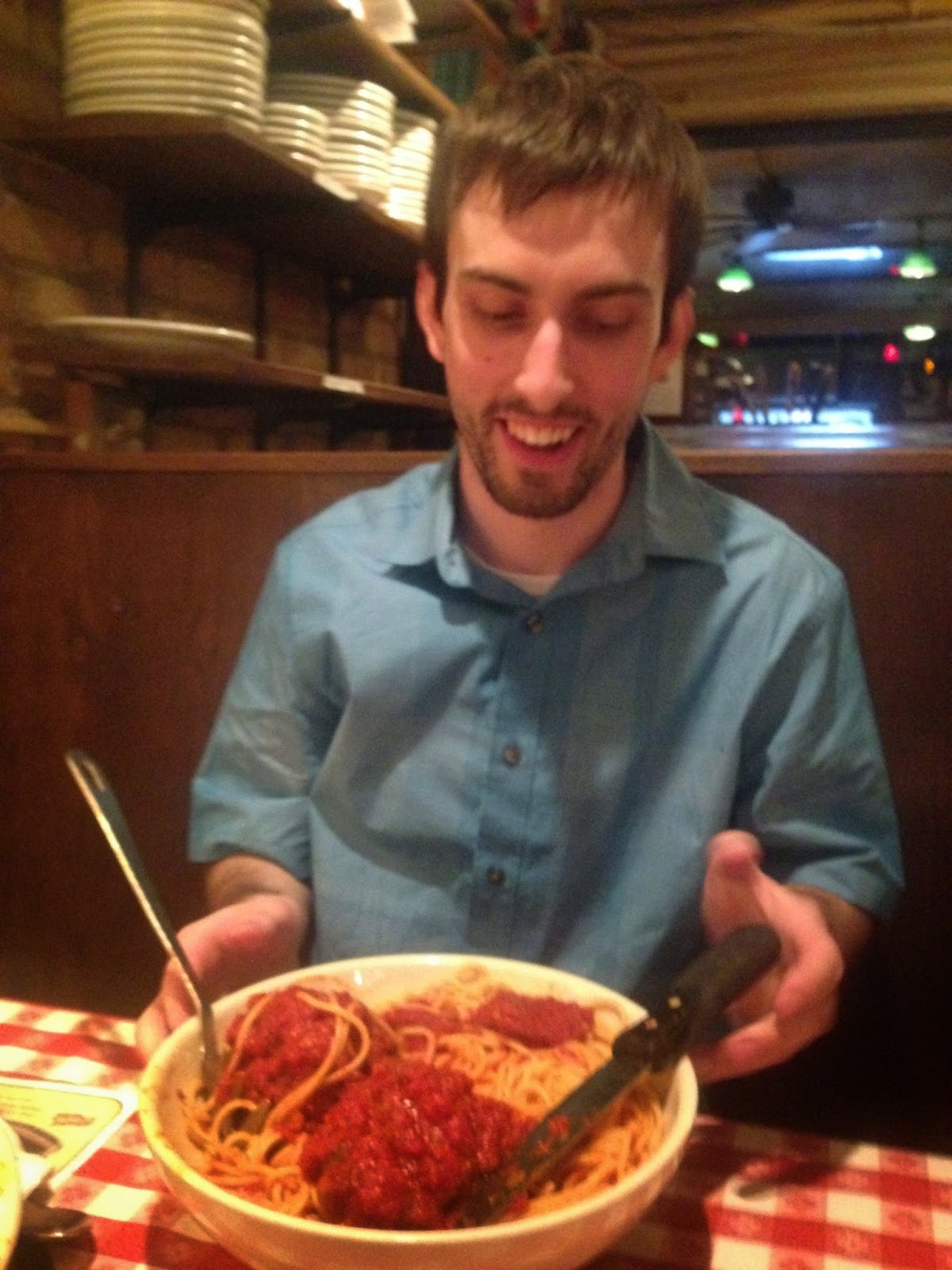 Yes, as I hinted in yesterday's post, it was the perfect day.  It was a wonderful reminder of God's faithfulness, an answer to a lot of prayer, the culmination of years of hard work, sweat and tears, and a reminder of how blessed I am to have the amazing and beautiful children, son-in-law, and husband that I have.

In the drive over to the restaurant, Jordan shared a story with us about how after his jury was over and it didn't go well,  he stepped outside to get some fresh air and his teacher Zach had come out to check on him.  Jordan shared with him, that above all, he just wanted to make his parents proud and he had to choke back tears.  I was so touched by that.  He didn't care about looking good to his peers, his professors, or anyone else.  He just wanted to make his parent's proud.  I wondered, doesn't he already know how proud I am of him?  I feel I am always praising and encouraging him, taking his picture, talking him up to others, etc. etc. and yet, he still felt the need to 'make his parents proud' in this single performance.  Well Jordan, you did make us proud.  I was grinning ear to ear during the entire recital and marveling at your skill and stage presence.  But most of all, you make me proud for who you are: a sweet, honest, tender hearted man after God's own heart.  I'm so thankful to be your mother. 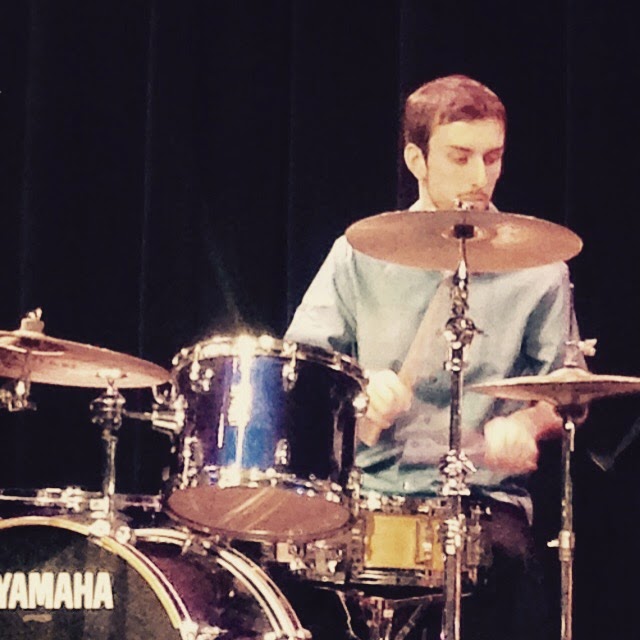 Well Jordan will be graduating May 1st…we are so looking forward to that day!  If anyone knows of anyone needing a drummer--he's available!  We spent five years helping him get a degree, now the next five will probably be spent helping him get a career!  Time to start worrying again!  A mother's job never ends!