Hello!  I'm back with my last travel post as promised.  The afternoon of Day Seven was spent on top of the world!  Well, not literally, but from a mid-westerner, it seemed like the top of the world!  We went to the top of Pike's Peak…14,115 feet above sea level!  Did you know that Pike's Peak is the most visited mountain in North America and the second most visited mountain in the world?  After being there, I can certainly see why.  There are not enough adjectives in the English language to describe it's beauty! 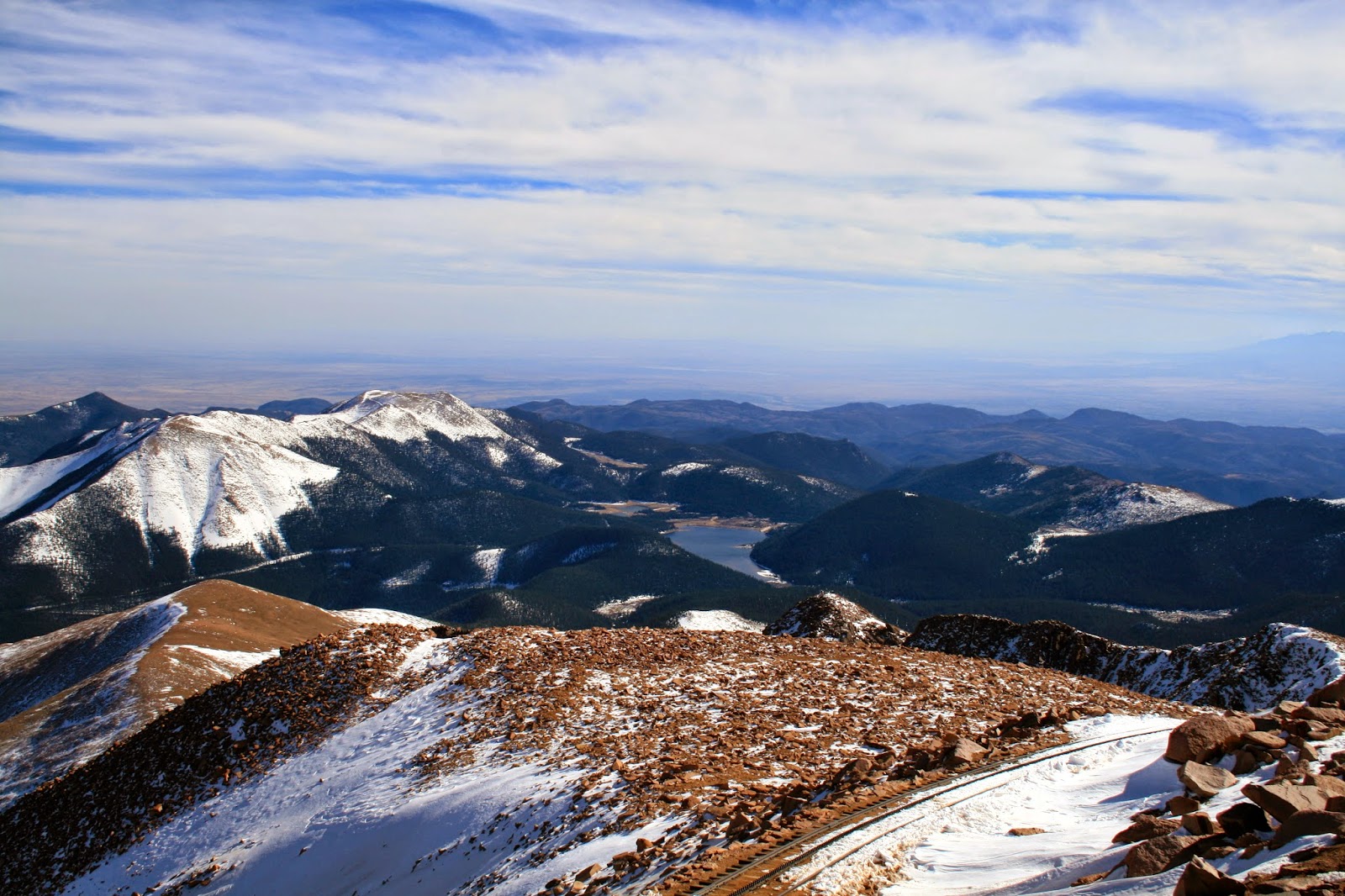 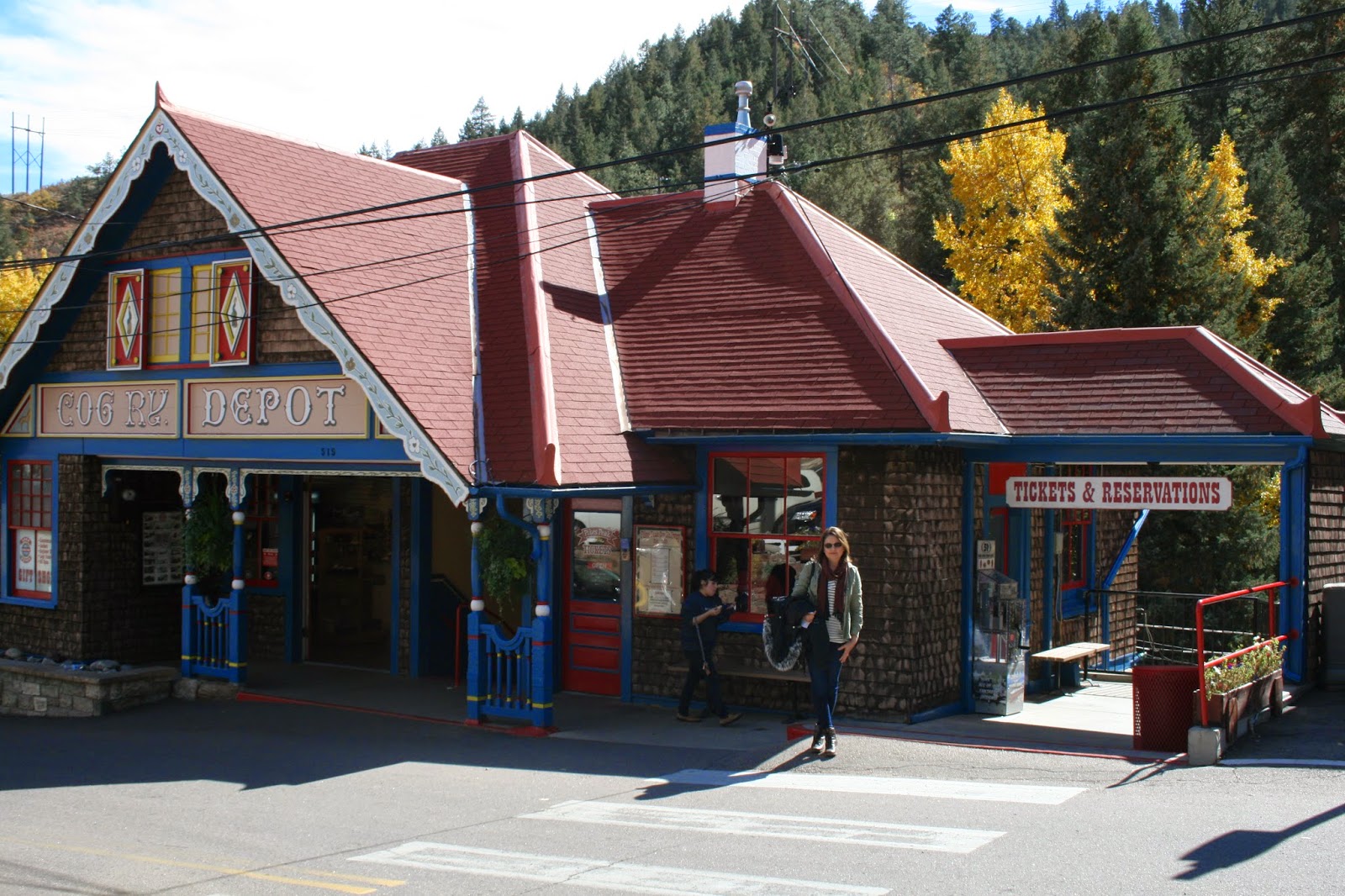 This was our train.  They are not luxury cars.  They have hard little wooden seats and you sit knee to knee with the person in front of you.  At first, I was quite uncomfortable with that.  But we ended up really clicking with the couple that faced us even though they were half our age.  We had a lot of the same interests and talked pretty much non-stop all the way up and down the mountain.  They loved to travel and they shared a lot of their travel adventures with us.  So it ended up being a very positive experience for us, however, I could imagine you get stuck with someone in front of you that was not a desirable travel companion. 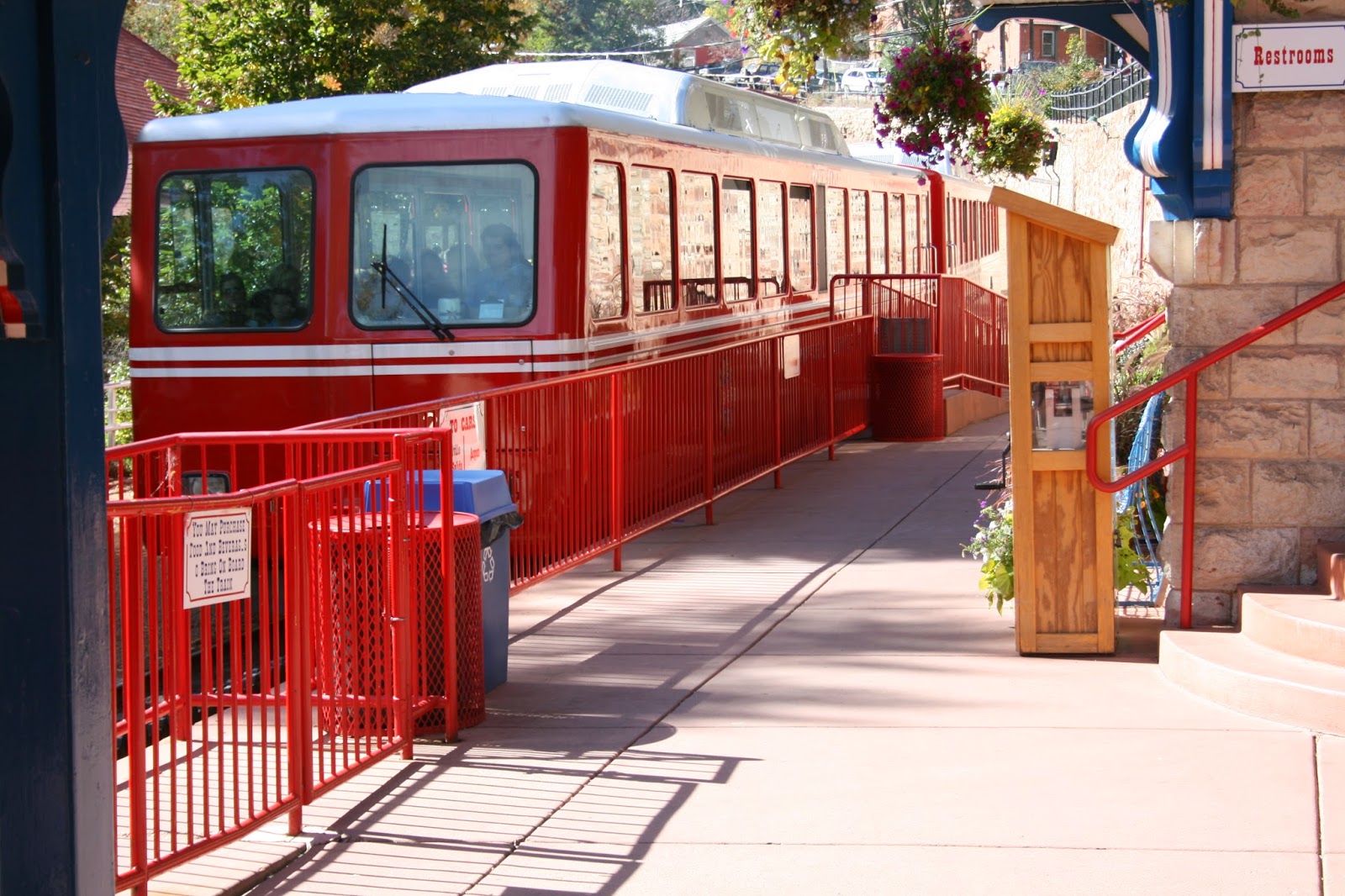 The train had three cars, and there is an engine in the first and last car.  On the way up the first car pulls and you may be going backwards or forwards depending on how your sitting on the train.  On the way down, the train doesn't turn around.  They just switch engines and the last car leads, so if you had the view in front of you going up, you will now be watching it as if you were looking out the back window going down.  This was my view as we left the station: 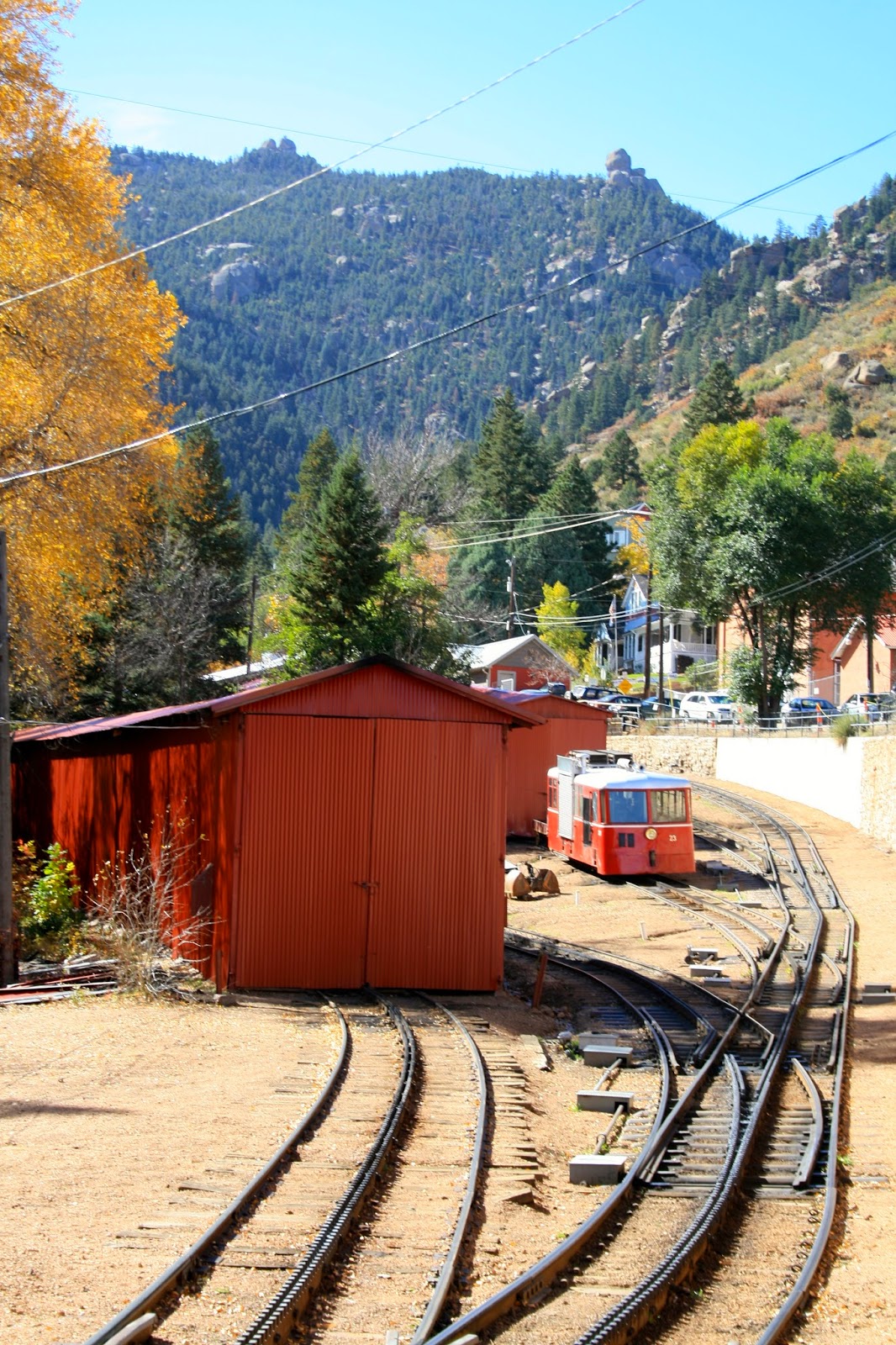 Now, as much as I preferred taking the train verses driving up, there are drawbacks.  The major one is what side of the car they seat you on.  The train has three seats on one side and two seats on the other.  If you are seated on the two seat side, you will get a view of the side of the mountain, and not the panoramic, scenic views of the landscape.  Well, we had the unfortunate luck of getting the two seat side, so we saw lots of trees, little babbling brooks, and rocks, and you have to crane your neck to see the gorgeous views on the other side of the train.  It would have been nice if the train could turn around at the top of the peak so everyone has a different view coming up and down, but it does not. 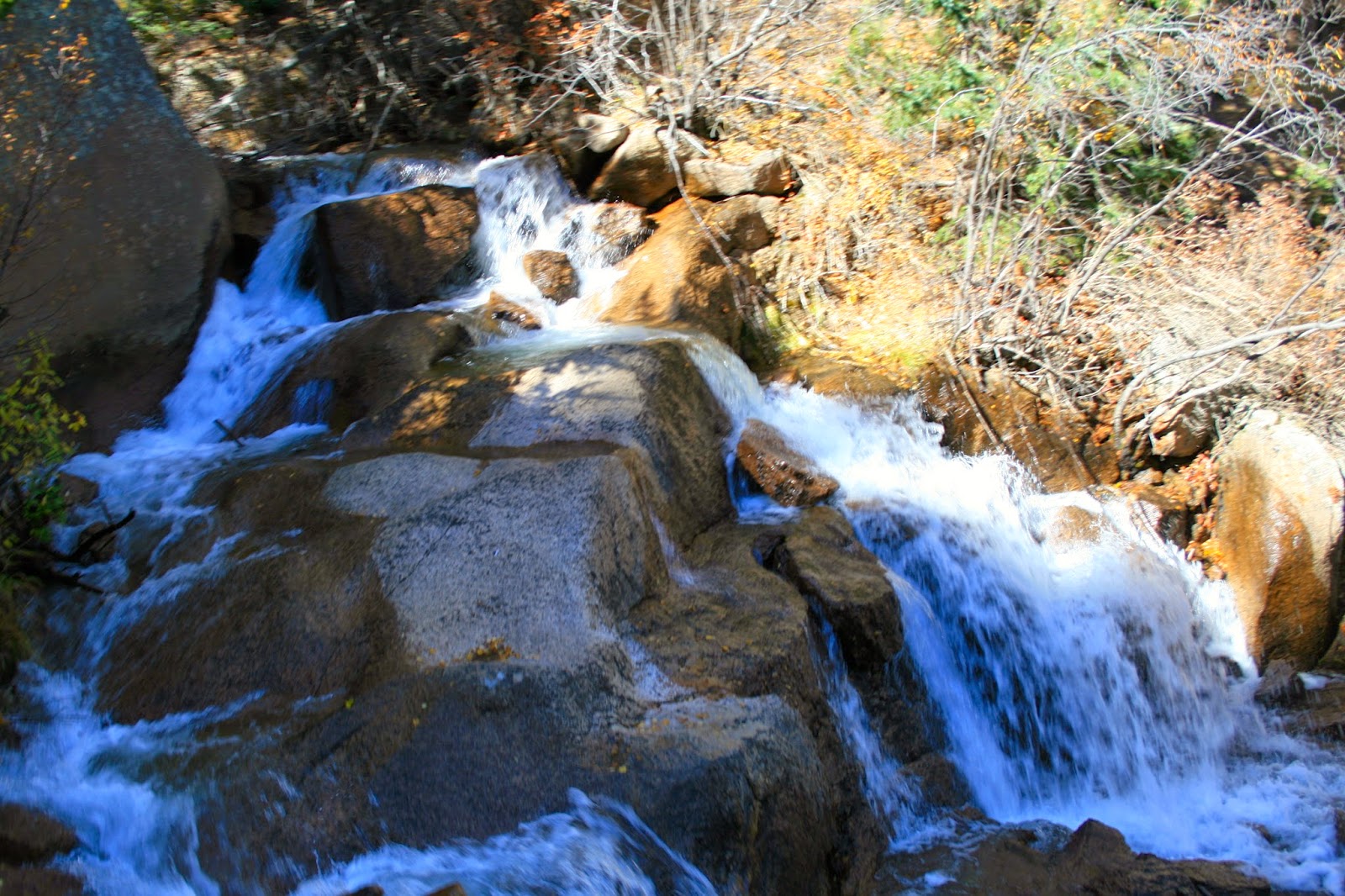 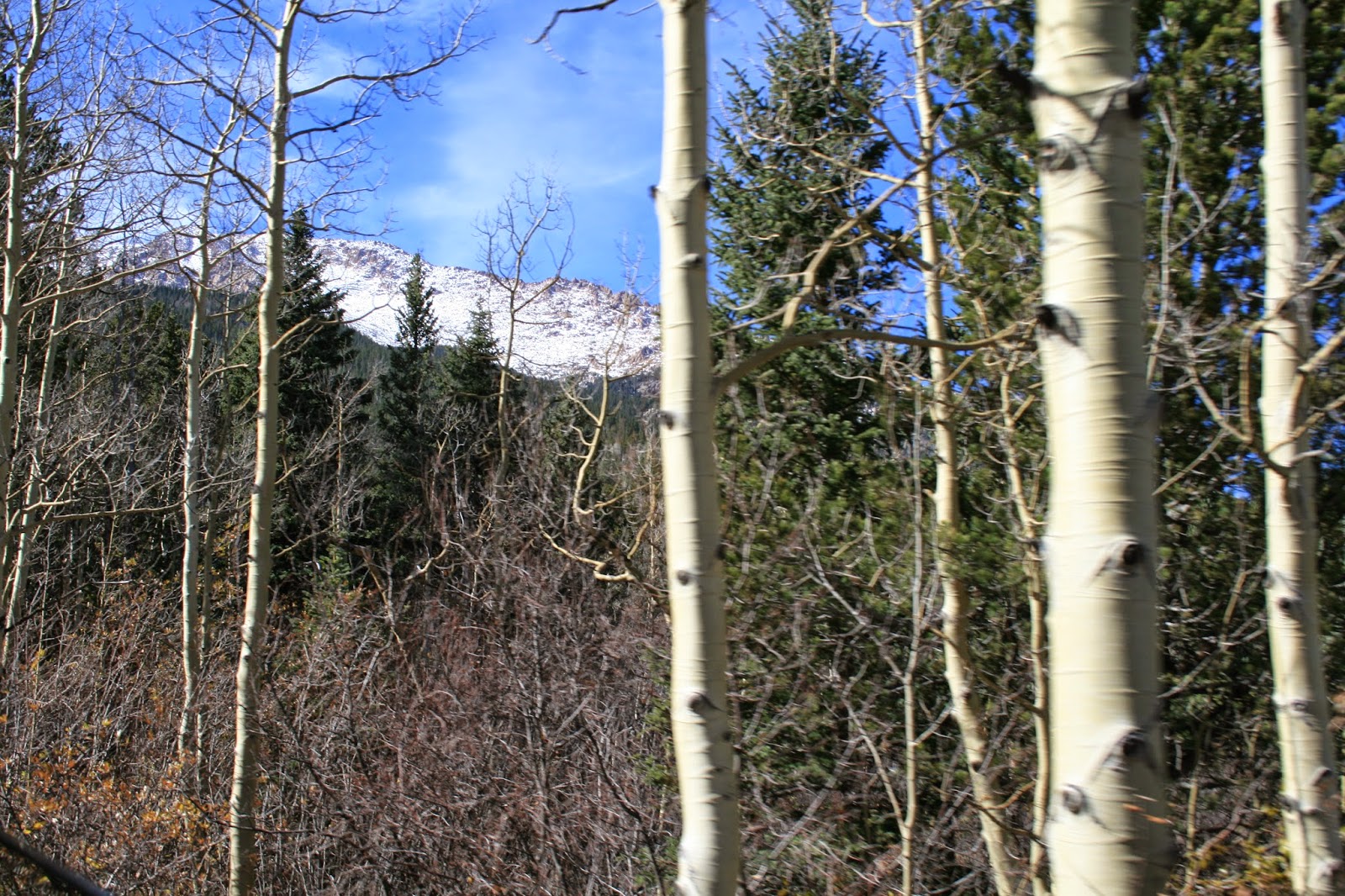 This was how we got to see the more spectacular views:  blocked by shadows of other people sitting on that side of the train.  A little disappointing.  You can't pick your seats.  They are assigned. 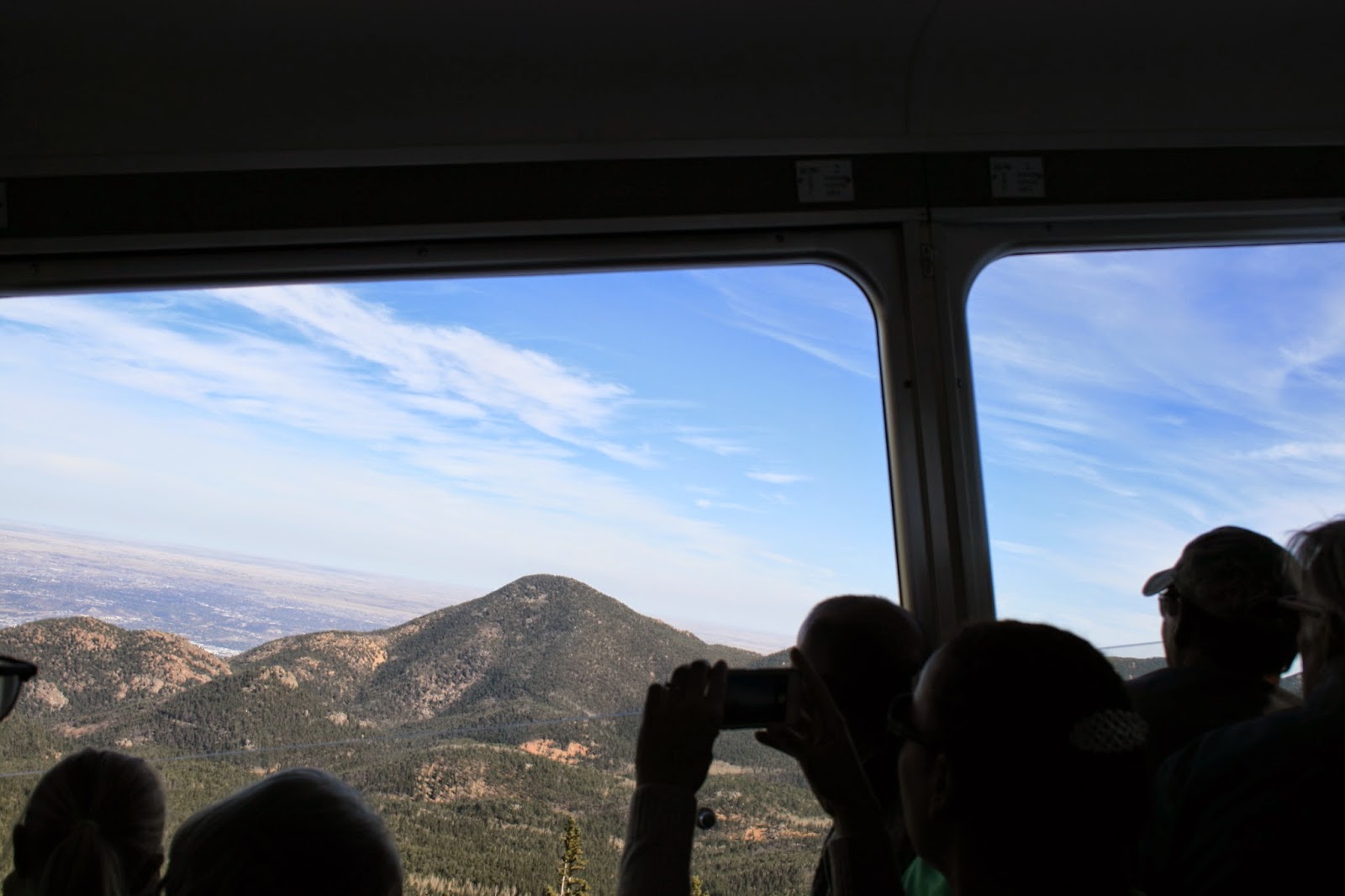 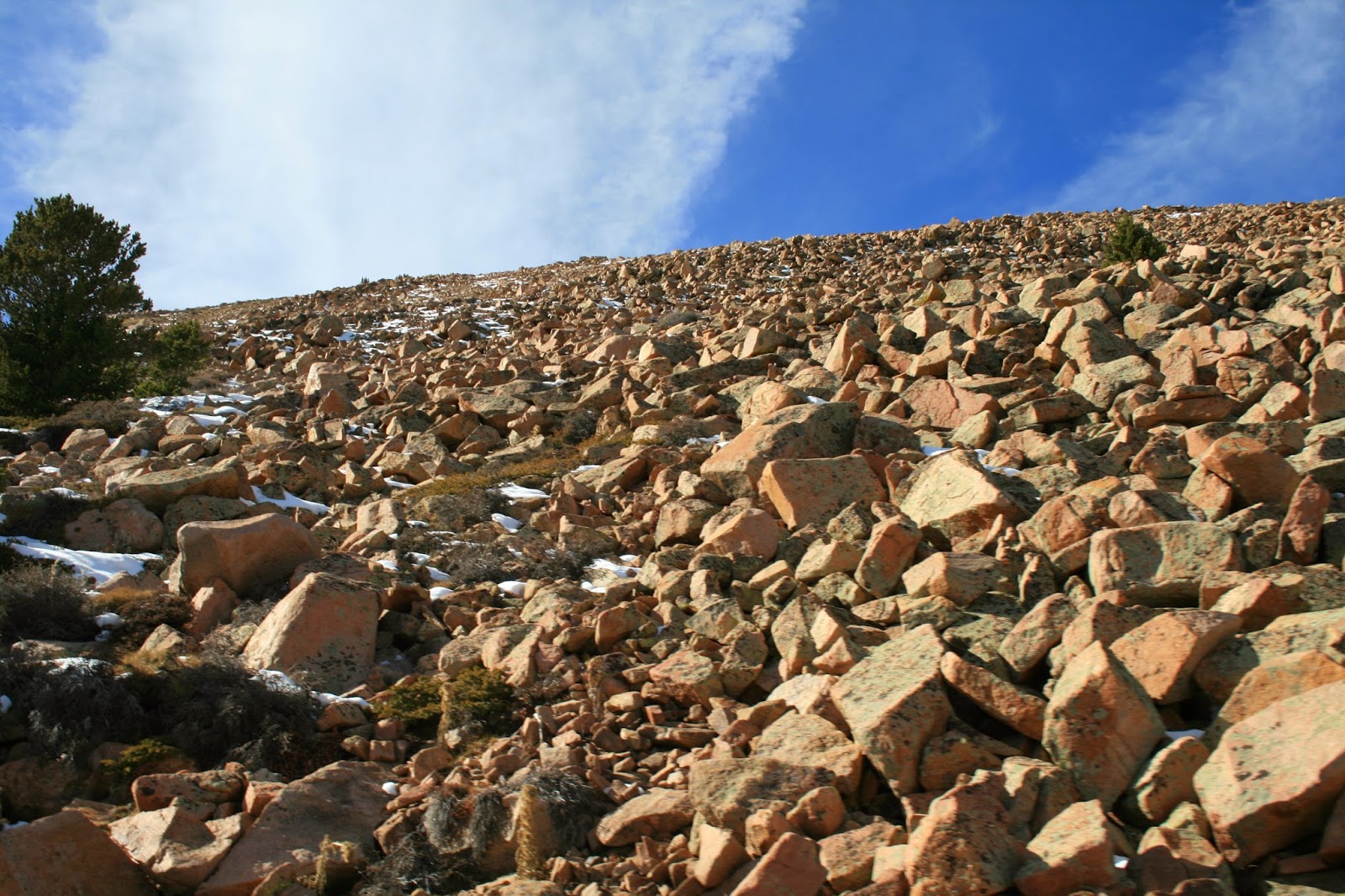 But we were still able to catch some 'ooh' and 'ahh' moments through the sea of heads on occasion. 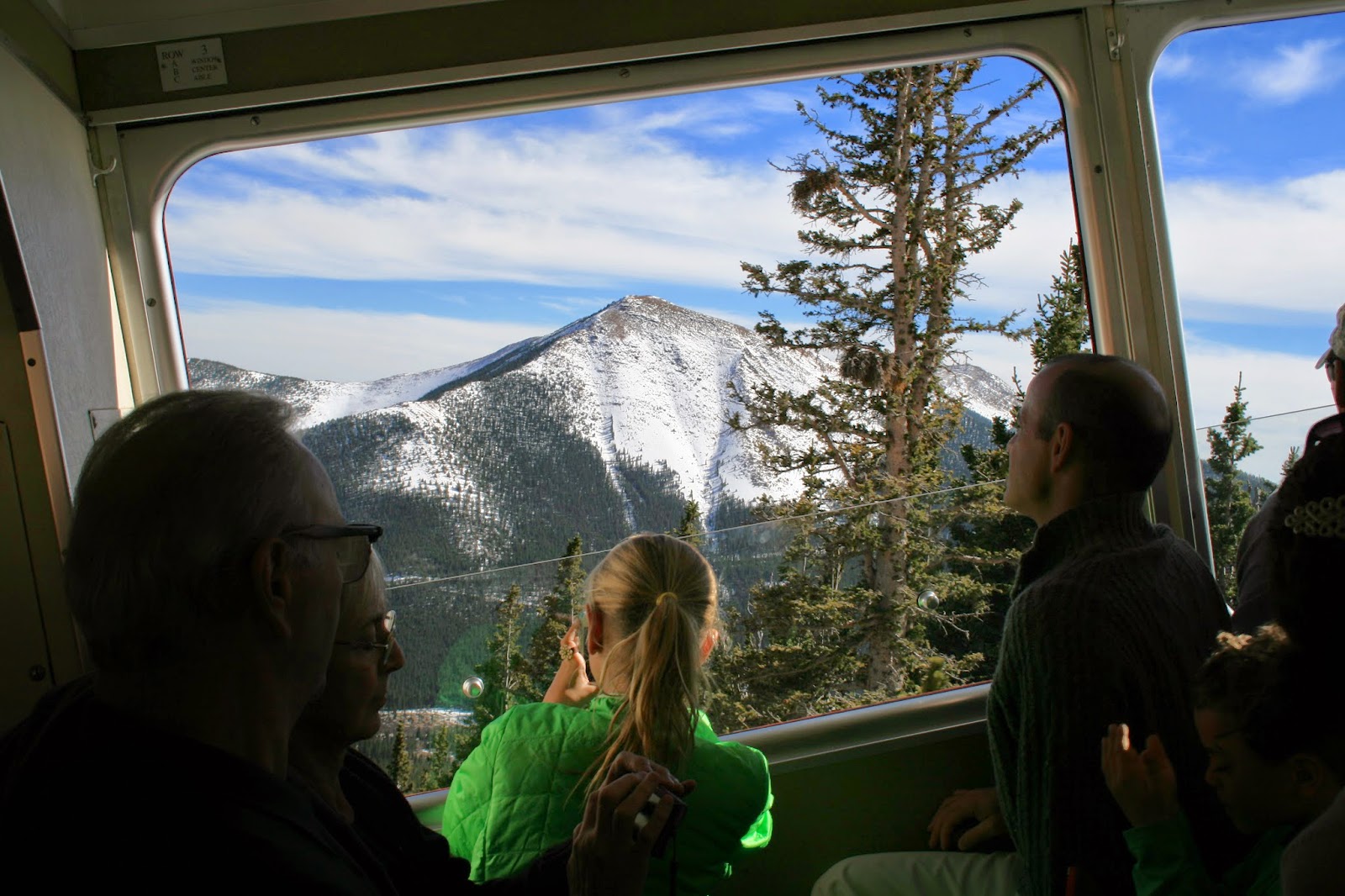 There was a beautiful, crystal blue body of water on the way up to summit that just took our breath away. 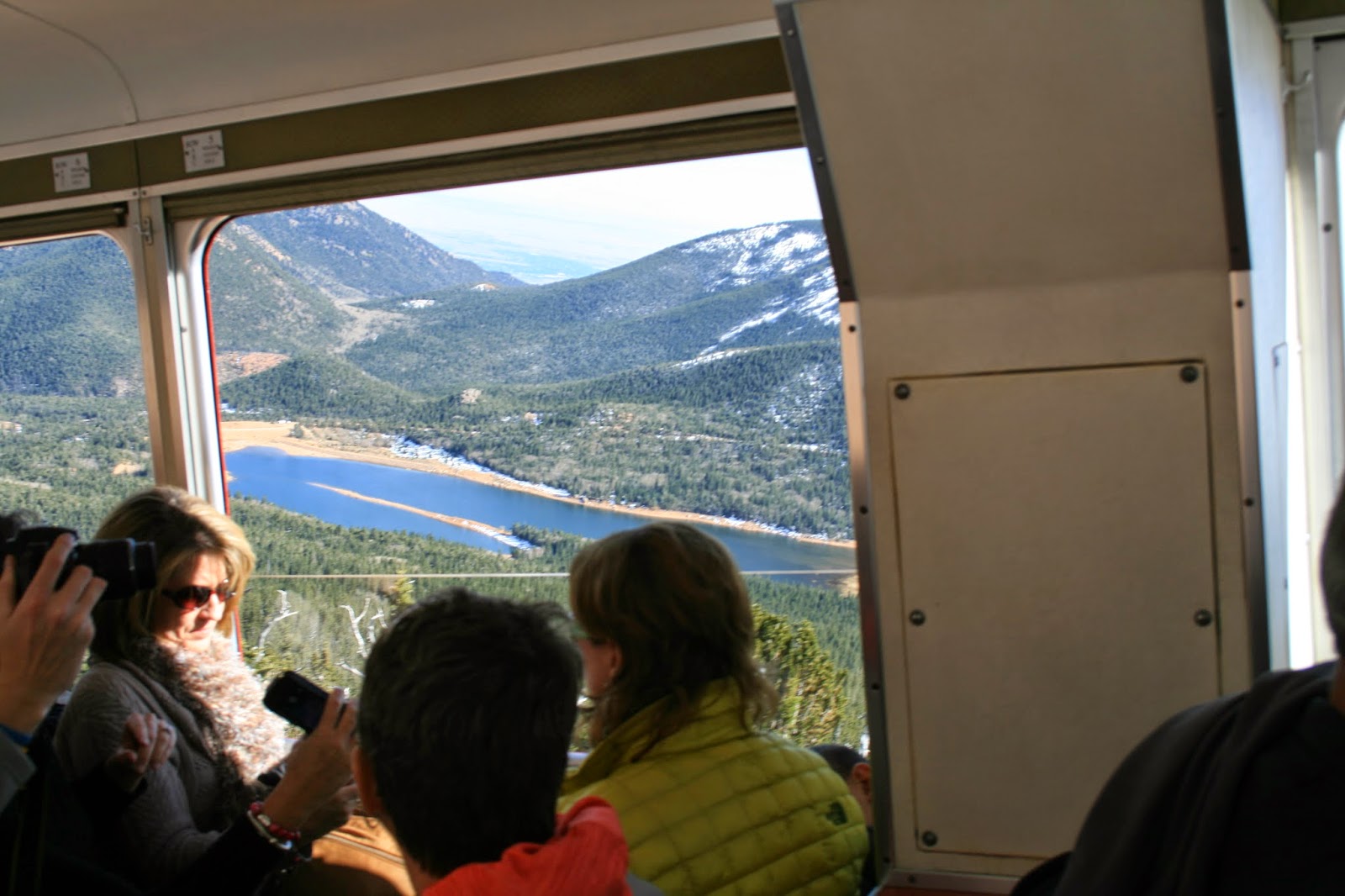 As we got closer to the top our own view started to open up and we were able to see more scenic landscape. 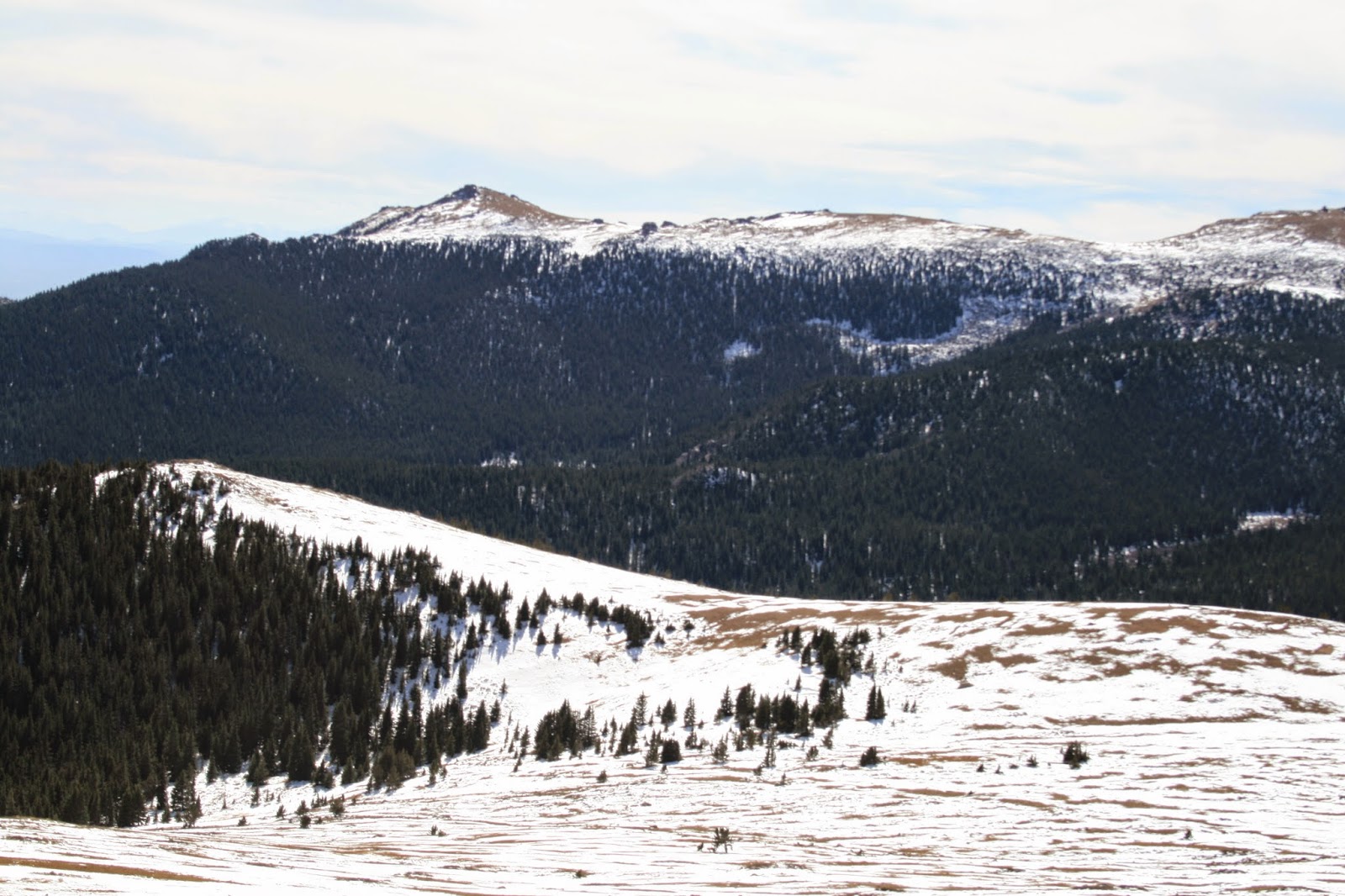 There were a only a few times I was nervous on the train, and this was one of them.  There  is a spot on the route where it seemed that the railway was very close to the edge of the mountain and I couldn't see the turn up ahead so it seemed like we were going to drive right off the edge. 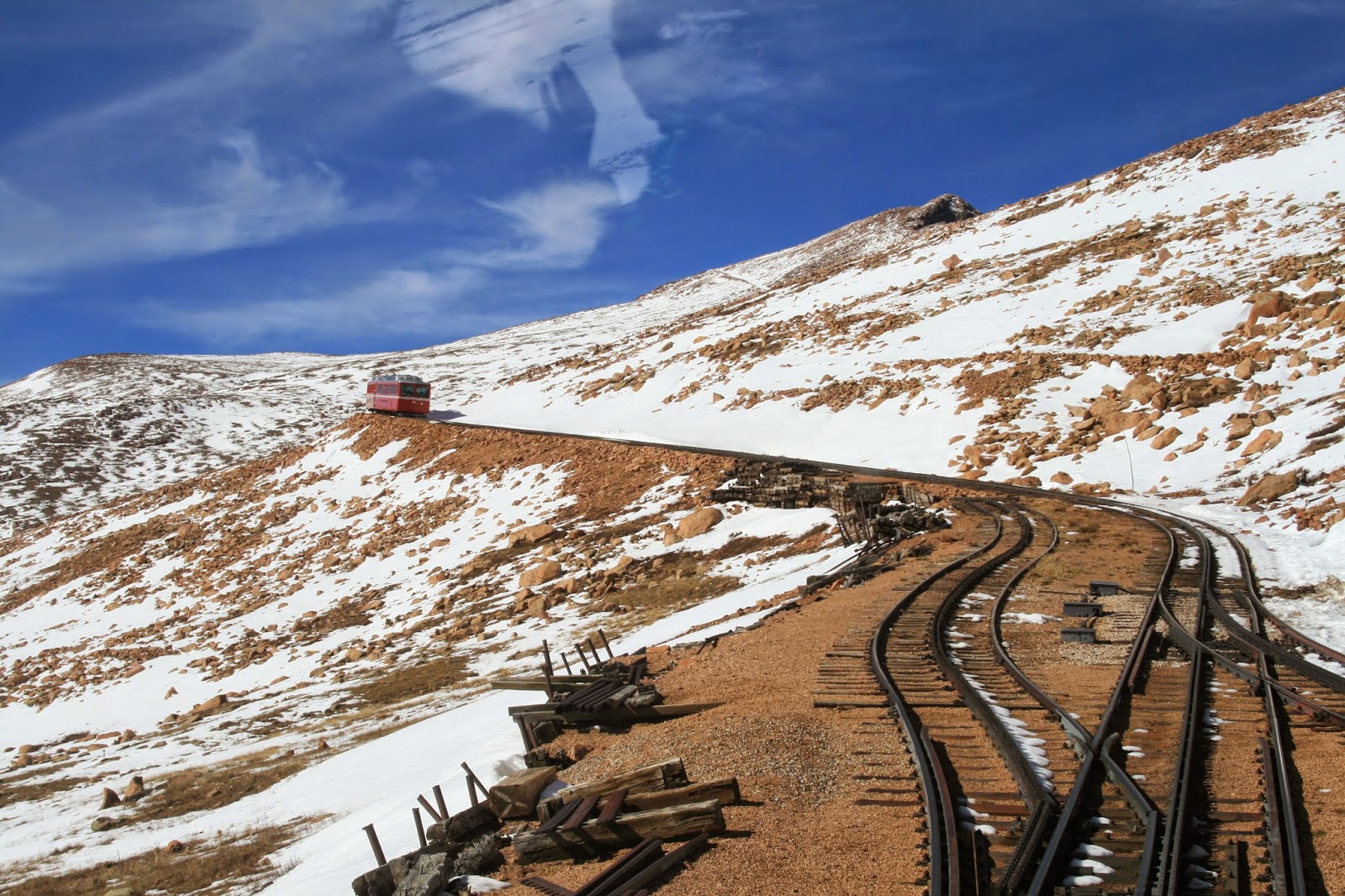 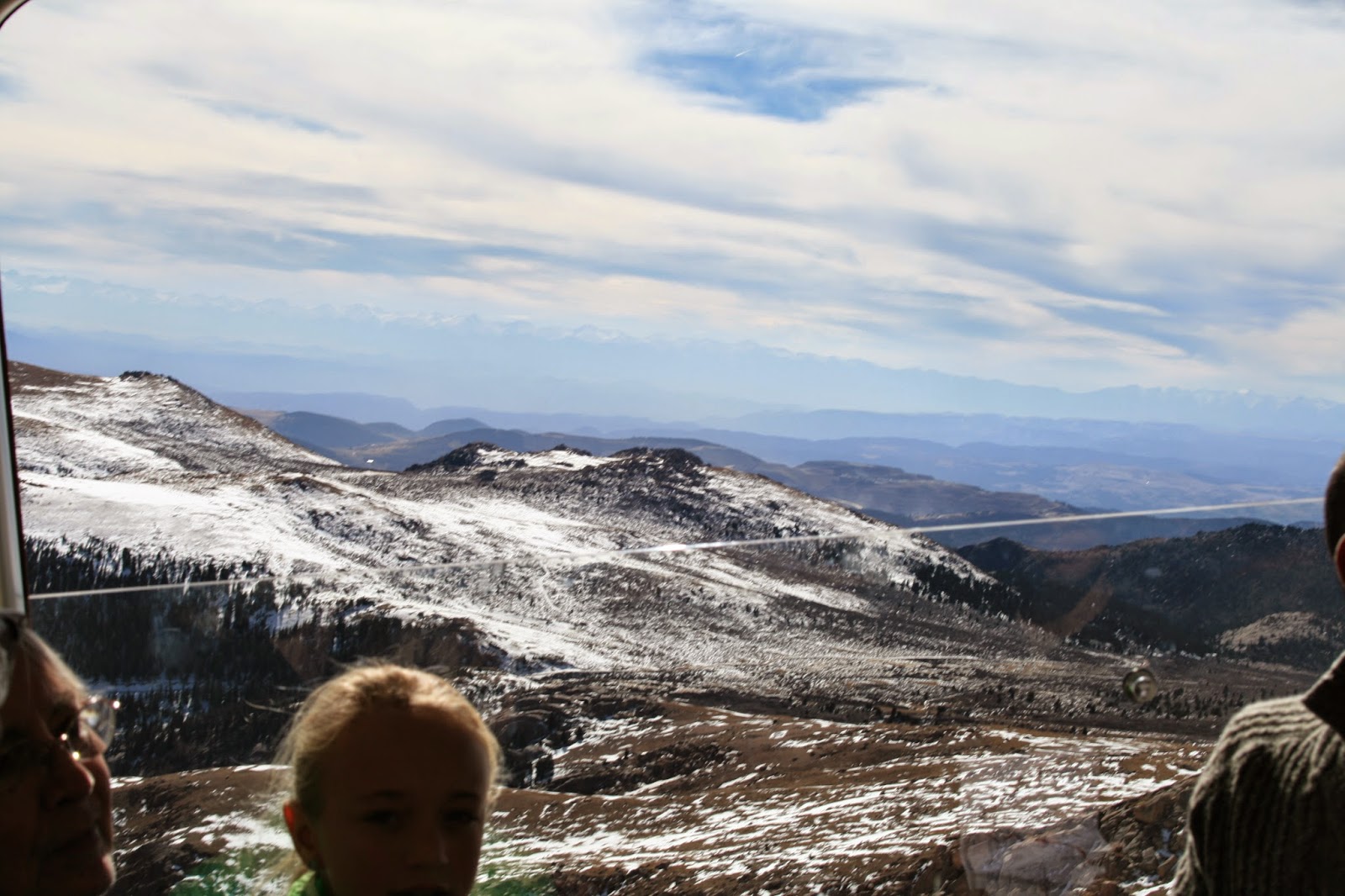 We did catch a peek of the road that cars use to drive up to the summit.  It looked a lot safer than the Mount Washington road. 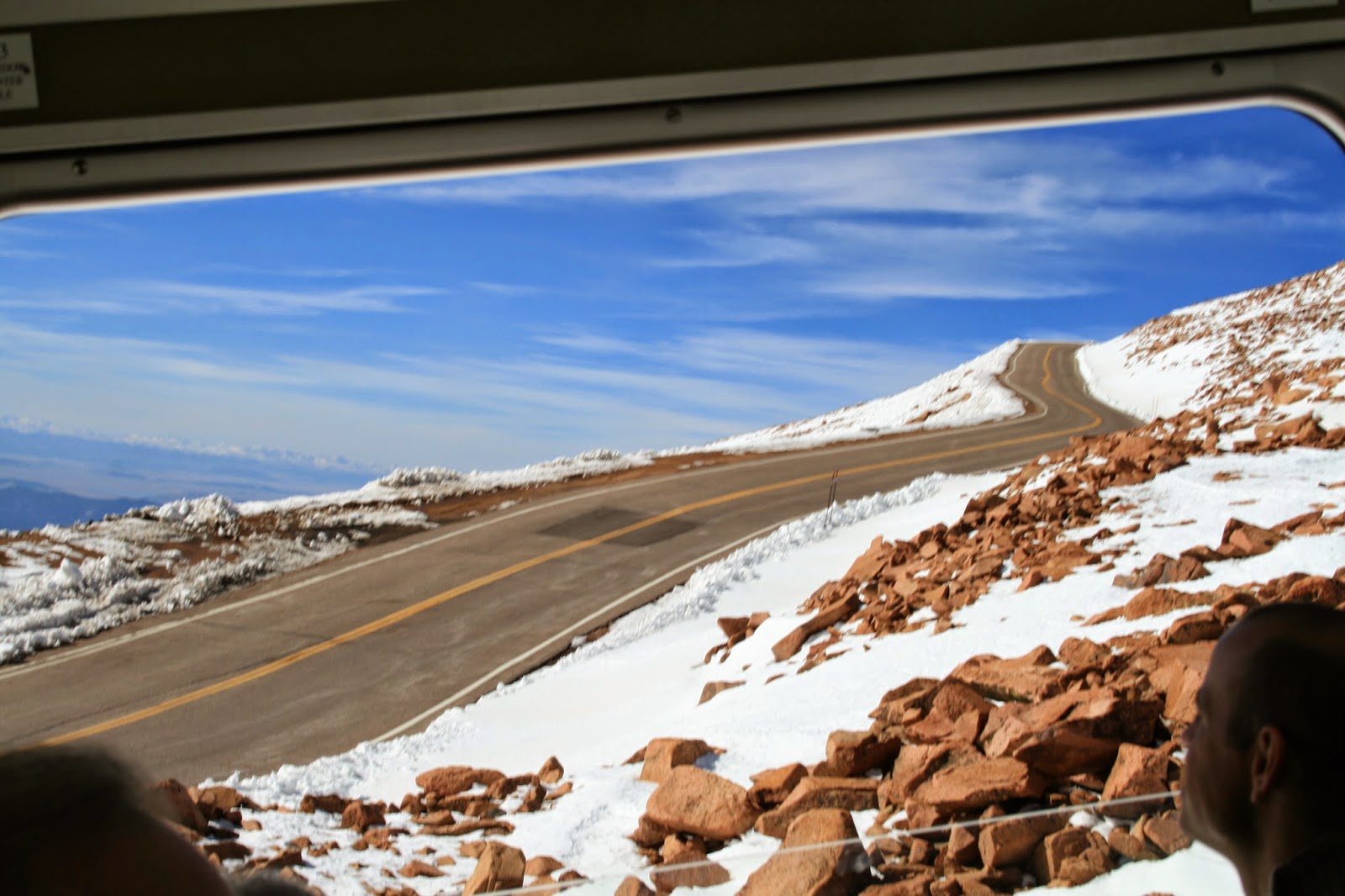 We finally made it to the top after about an hour.  The entire round trip is three hours, and ten minutes and they let you have about thirty to forty minutes on top of the peak to explore.  There are several look out points with coin binoculars, and a restaurant with a gift shop and restrooms on top of the peak.  I will say that the facilities on top of Pike Peak are no where near as nice as the facilities on top of Mount Washington.  Mount Washington has indoor lookouts so you could enjoy the view without the wind and cold, and they also had a museum and exhibits. 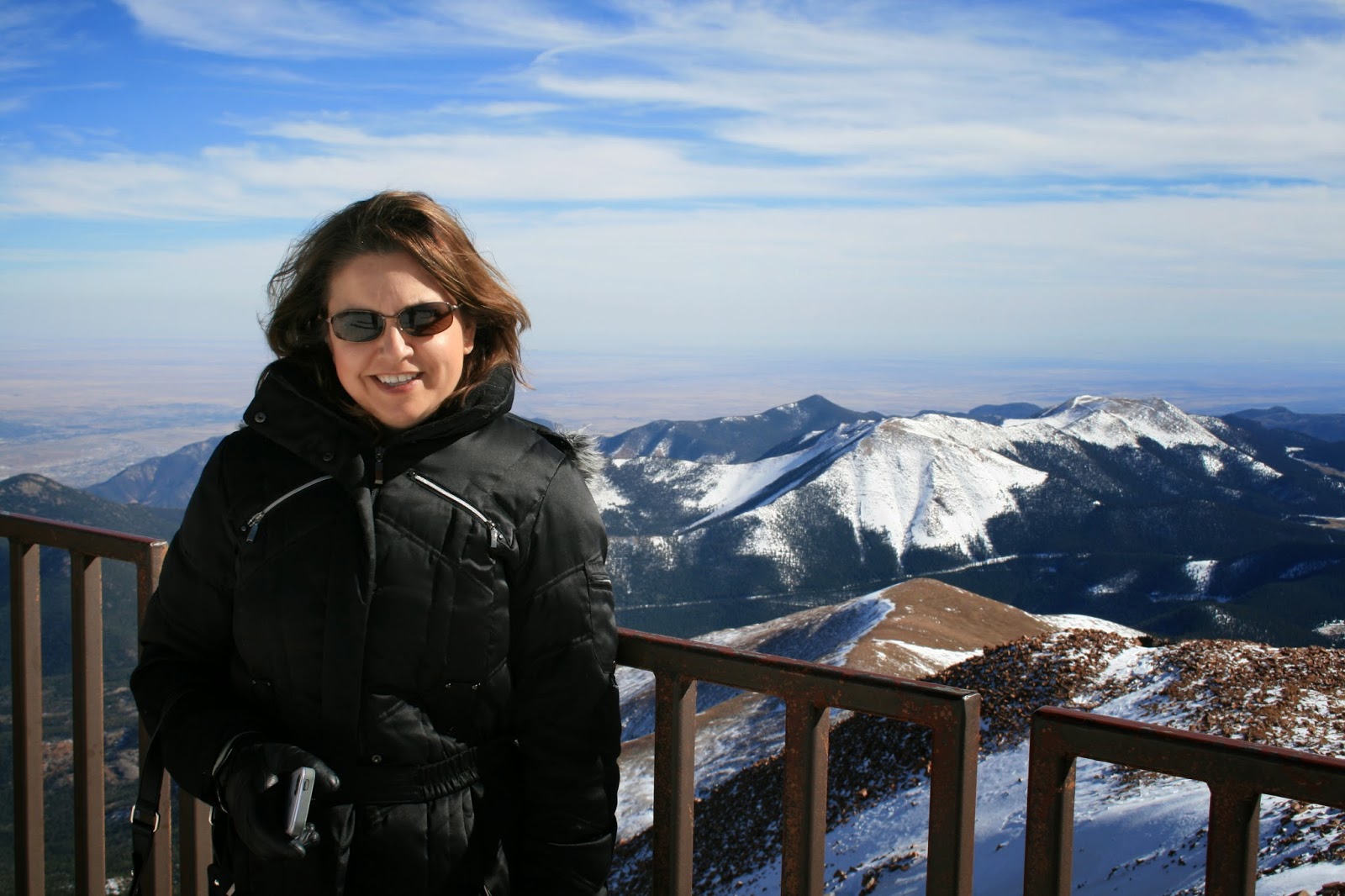 Unlike Mount Washington, we were prepared and brought our winter coats with us.  The temperatures on top of Pike's Peak can be thirty to forty degrees colder than at the base.  Since it was in the upper sixties or lower seventies that day, it was probably only thirty degrees on top, plus a strong wind.  We were quite comfortable with our winter jackets, although, it felt very strange to step in snow when I hadn't seen any since last winter. 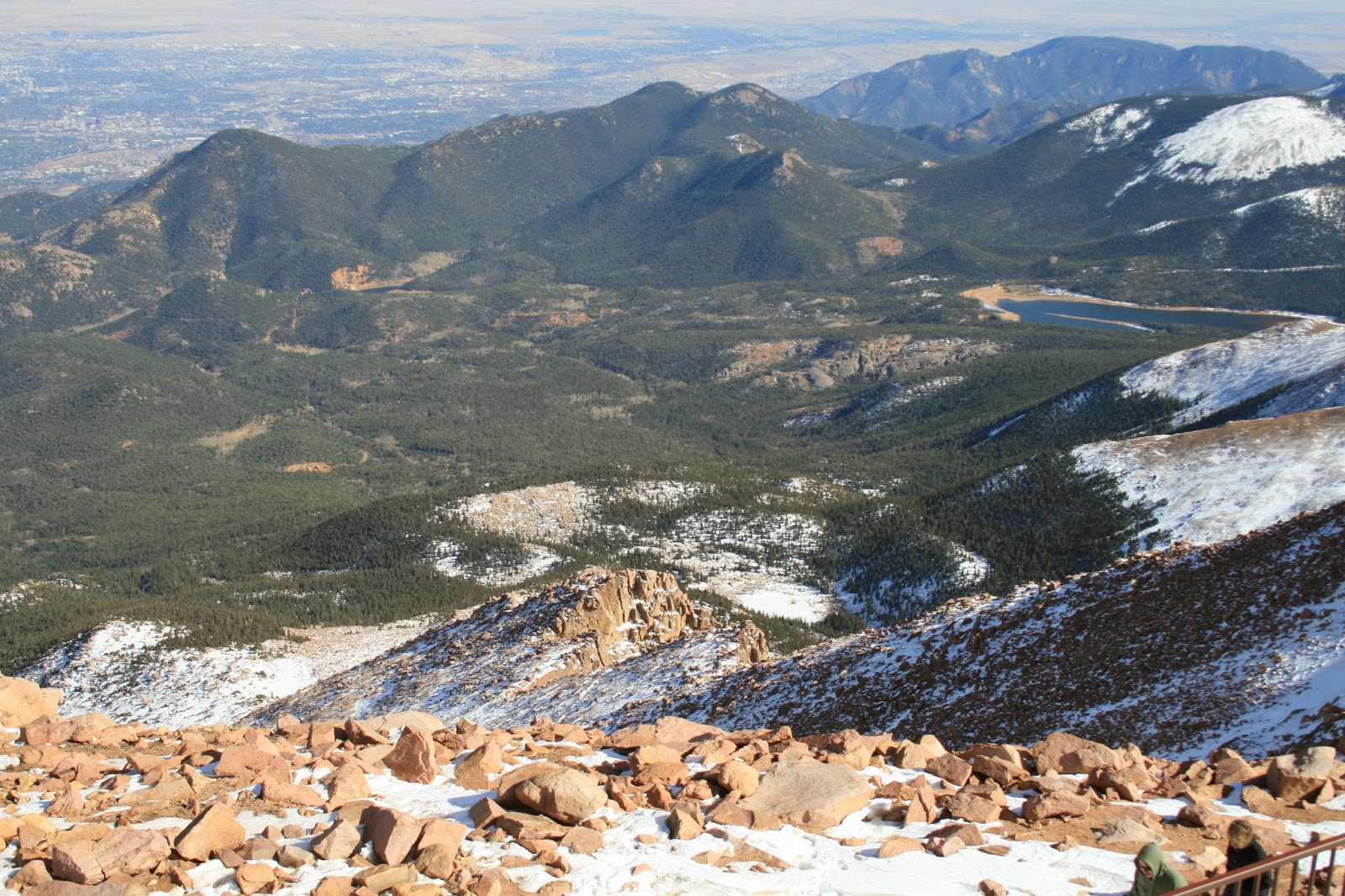 There is a plaque on top of the peak that has the lyrics to the song America the Beautiful on it.  According to historians, back in 1893 Katharine Lee Bates took a train trip from Massachusetts, to Colorado Springs and was inspired by the sights she saw along the way.  When she saw the majestic view of Pike's Peak she was inspired to write a poem, which several years later, was turned into a hymn by Samuel A. Ward. 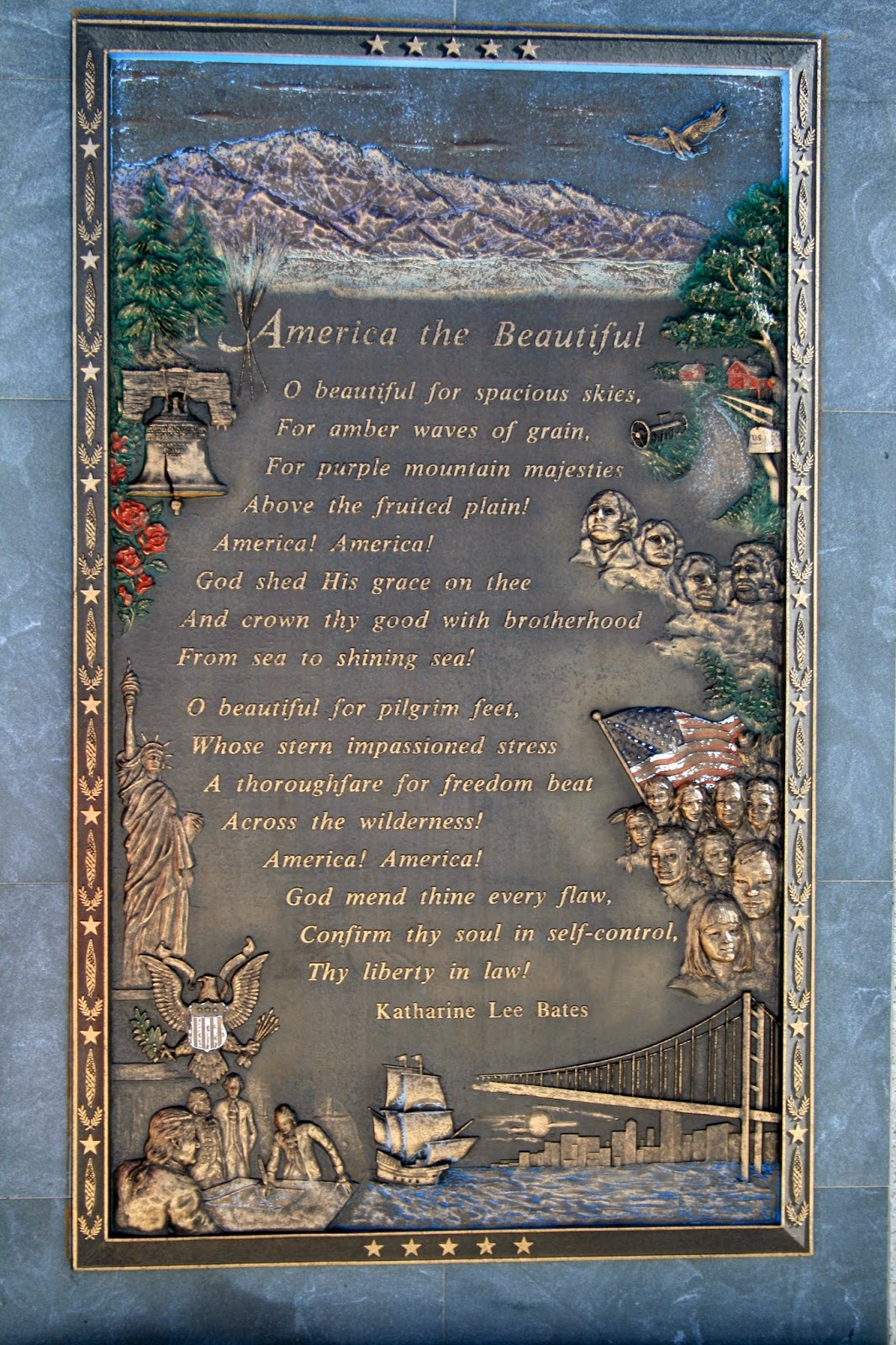 Up till now, I had several mountain top experiences, but this was by far the highest I have ever been and I did, for the first time, experience some altitude sickness.  Not much, but I could tell I was dizzy and a little difficulty maintaining my balance when walking. 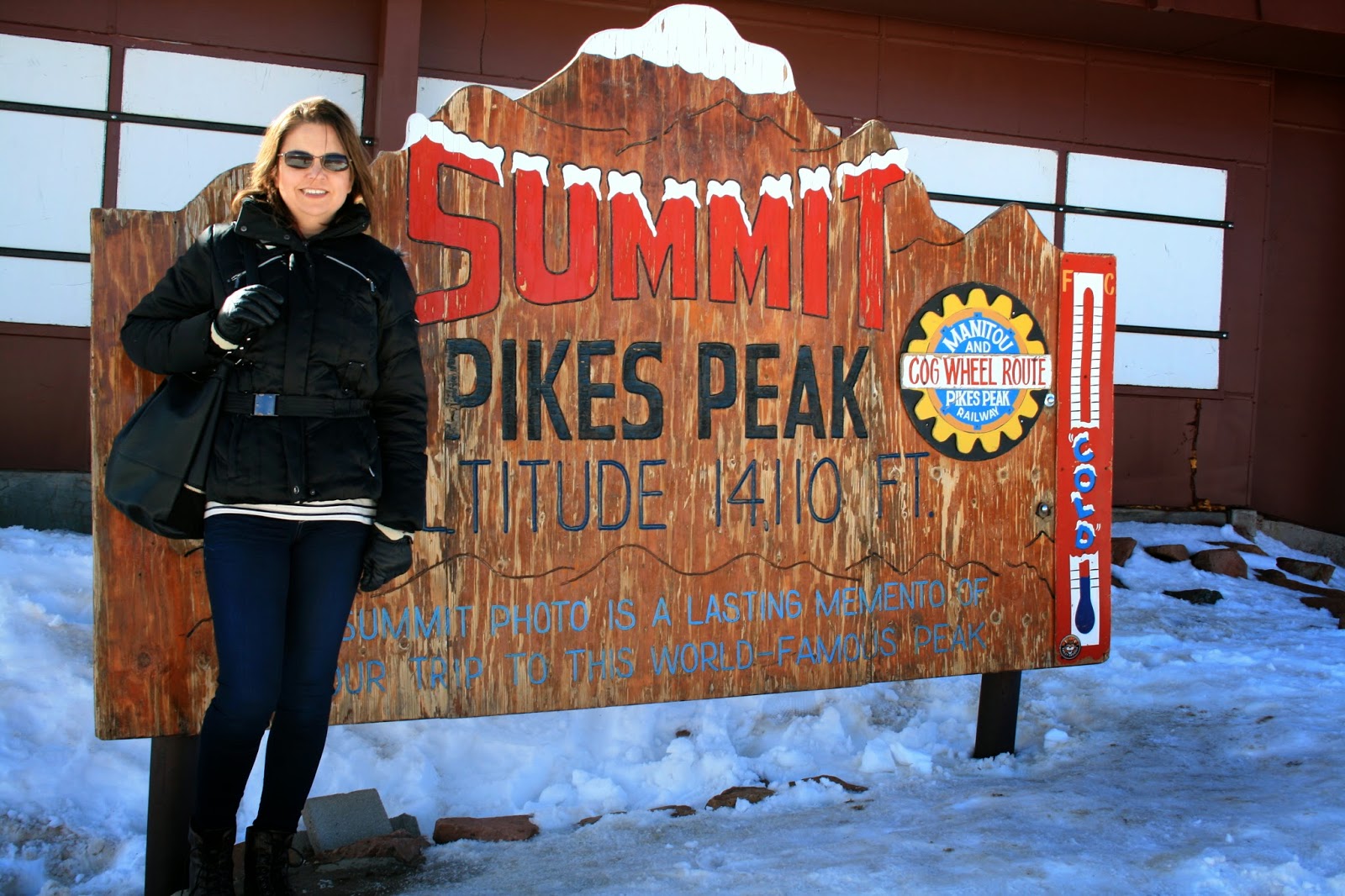 This was where the trains sat as they waited for us to re board.  Doesn't it look like they are about to fall off the edge of the world? 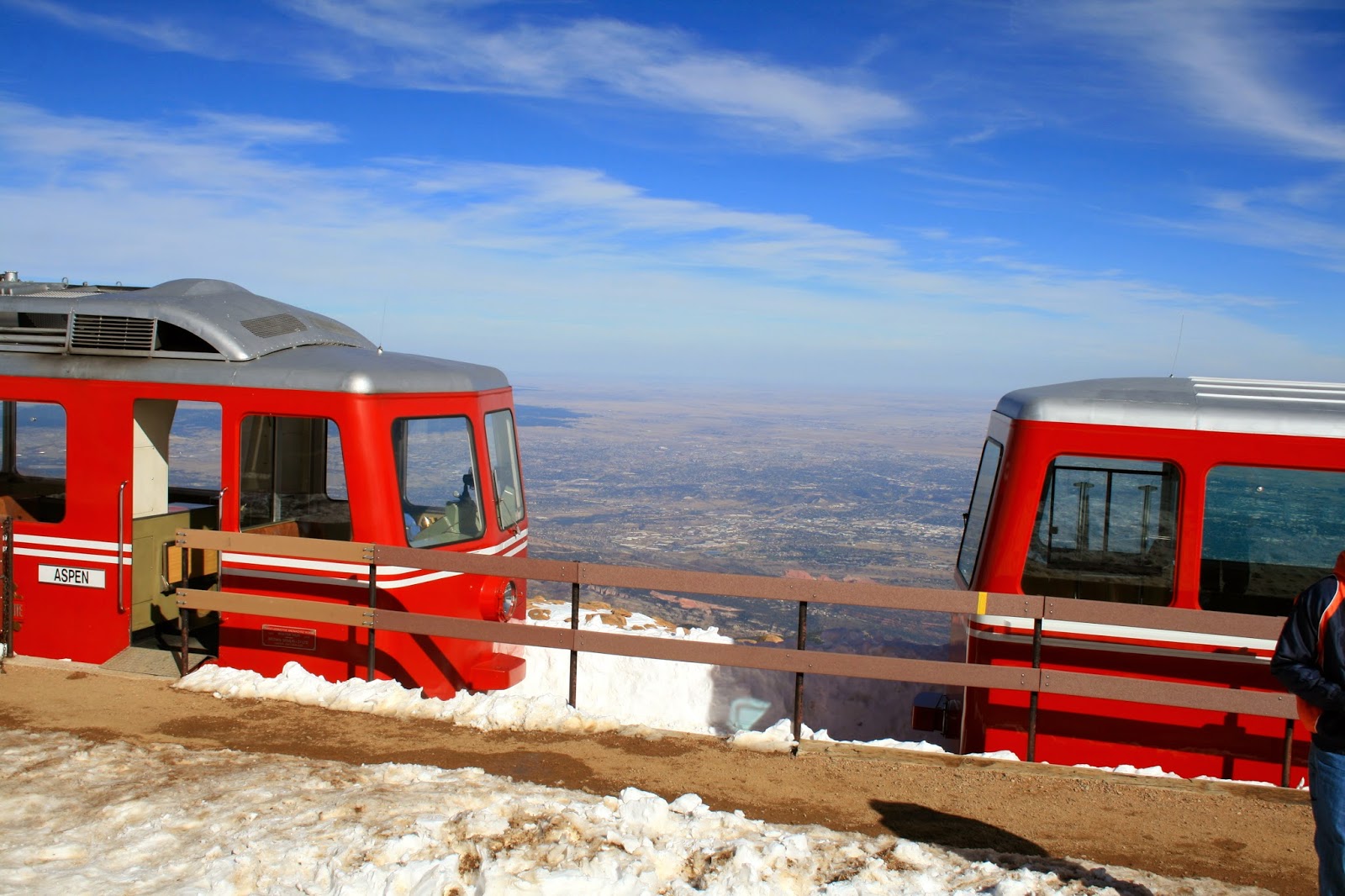 There are probably two places on earth where I feel closest to God.  Number one is the ocean, and number two is the mountains.  I never tire of scenic mountains views, and neither does my husband.  I don't know how anyone can stand on top of a mountain and see views like this and not believe that there is a God. 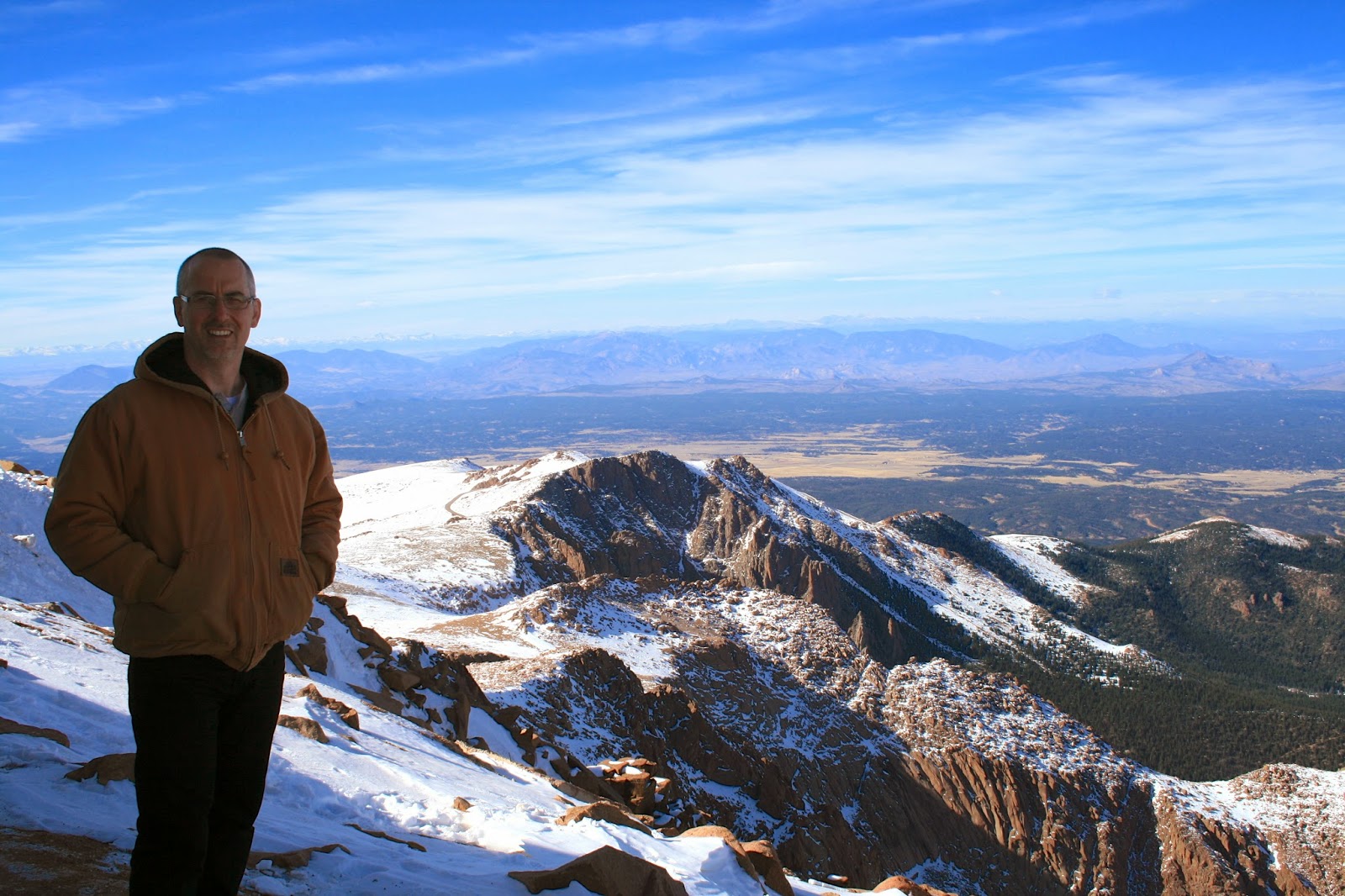 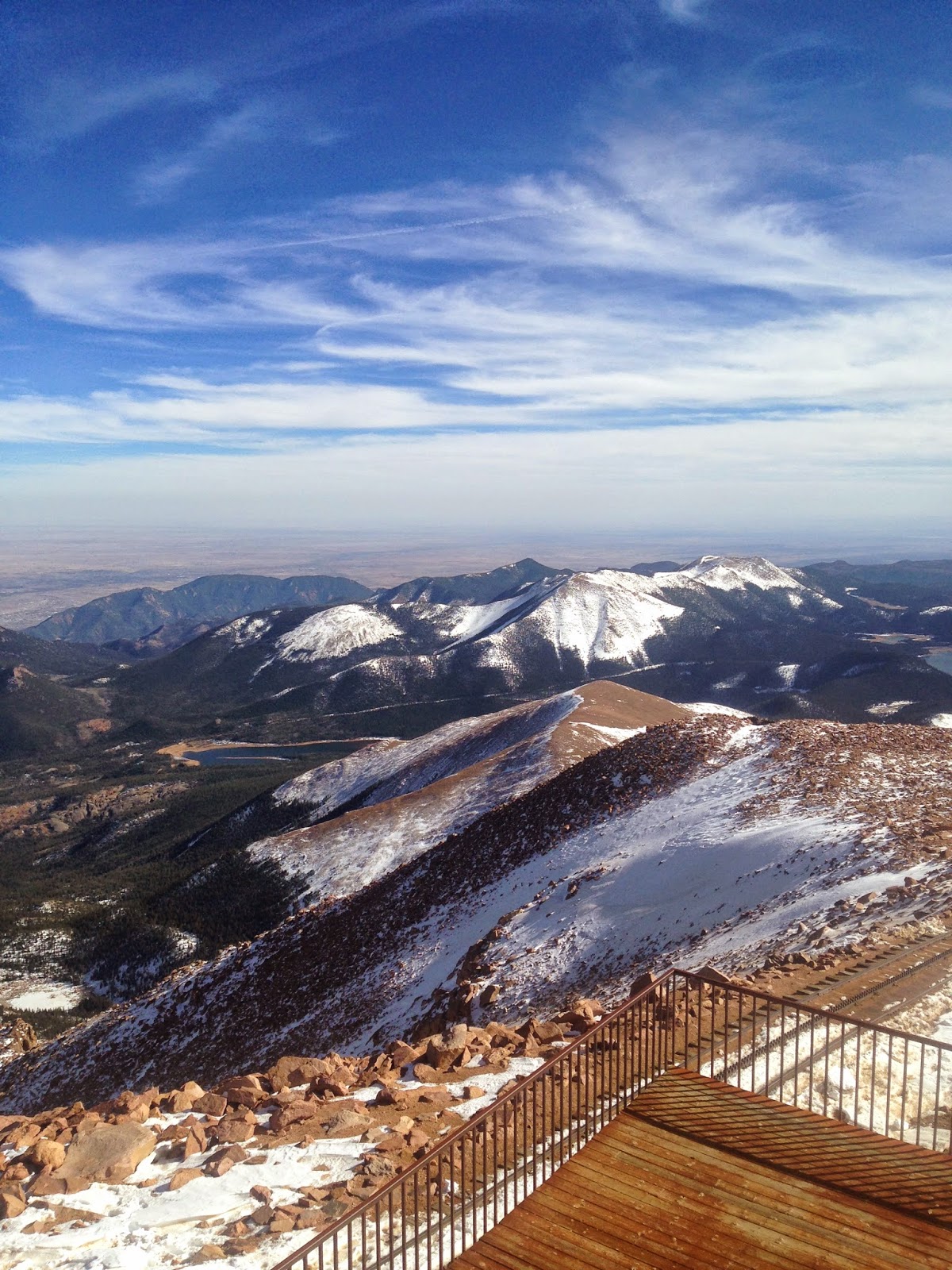 " Oh beautiful for spacious skies…for purple mountain majesties, above the fruited plain" one can definitely see the inspiration for these lyrics when standing here! 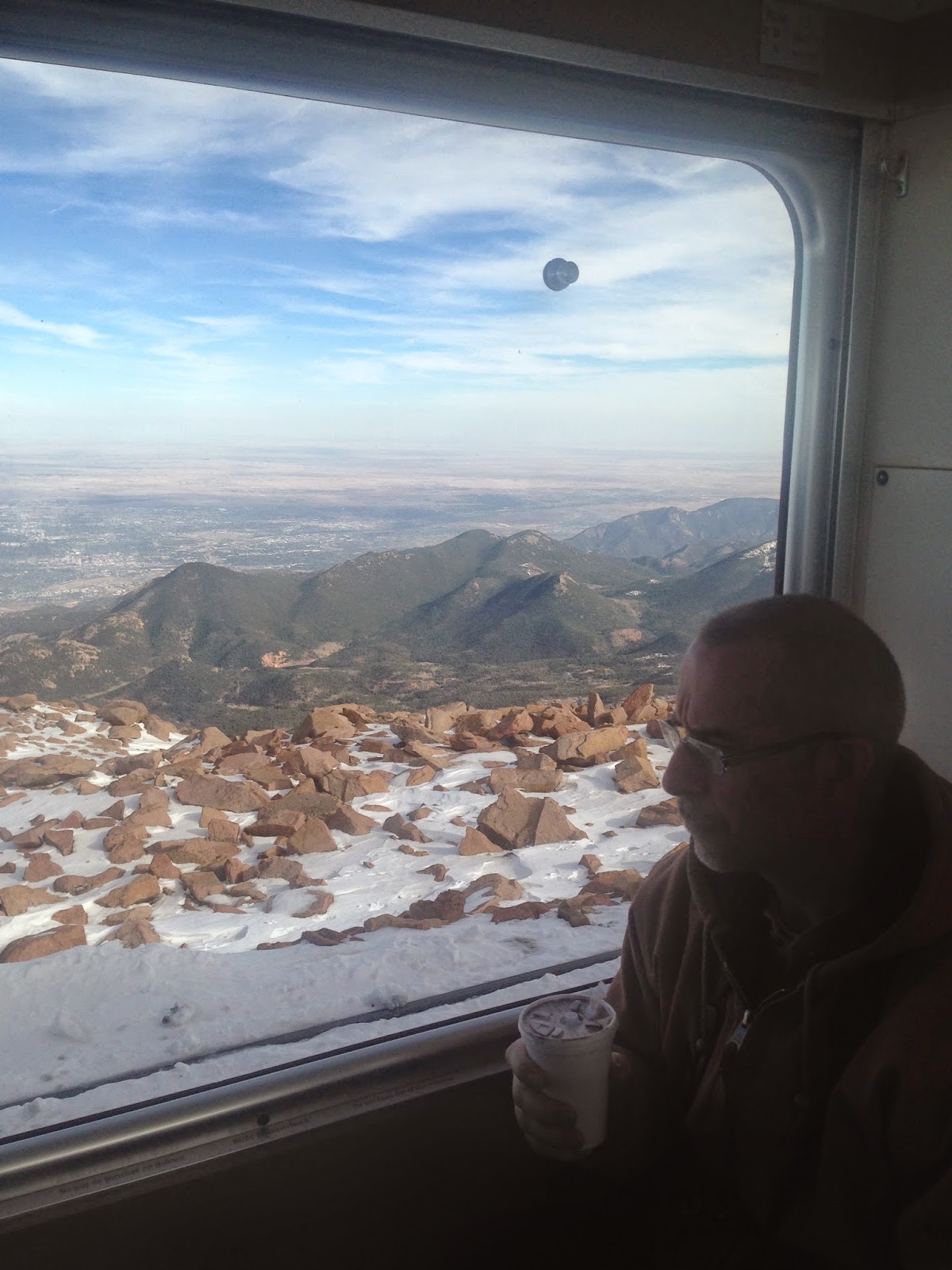 After we soaked in all the beauty and glory of God's creation we could possibly contain, we grabbed a couple of hot chocolates to warm us and headed back to the train for the ride down. 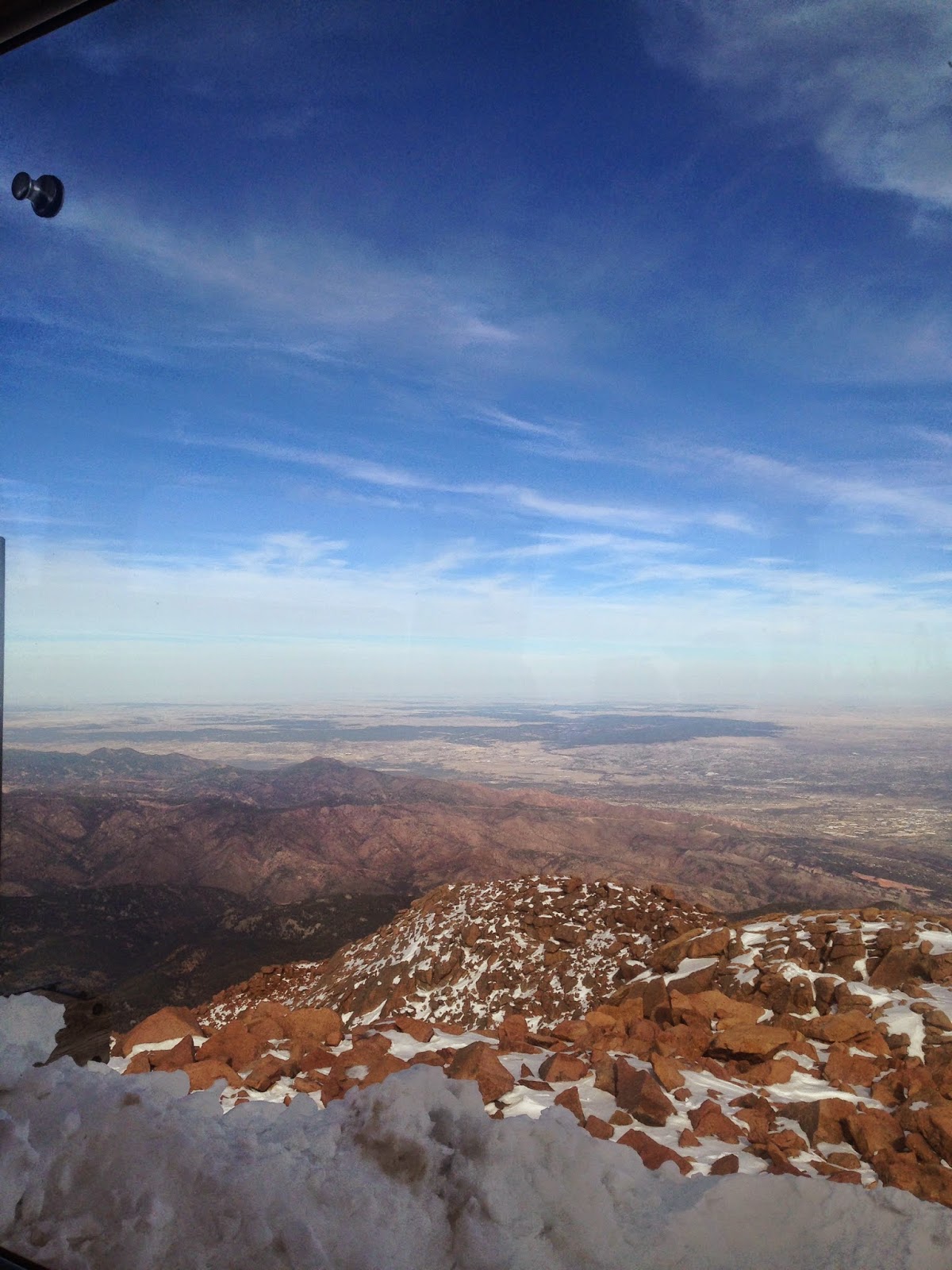 It felt cozy, warm, and relaxing going back down after being out in the brisk, cold mountain air for awhile.  I noticed a number of people actually started to nod off, which surprised me.  How could anyone peel their eyes away from this view? 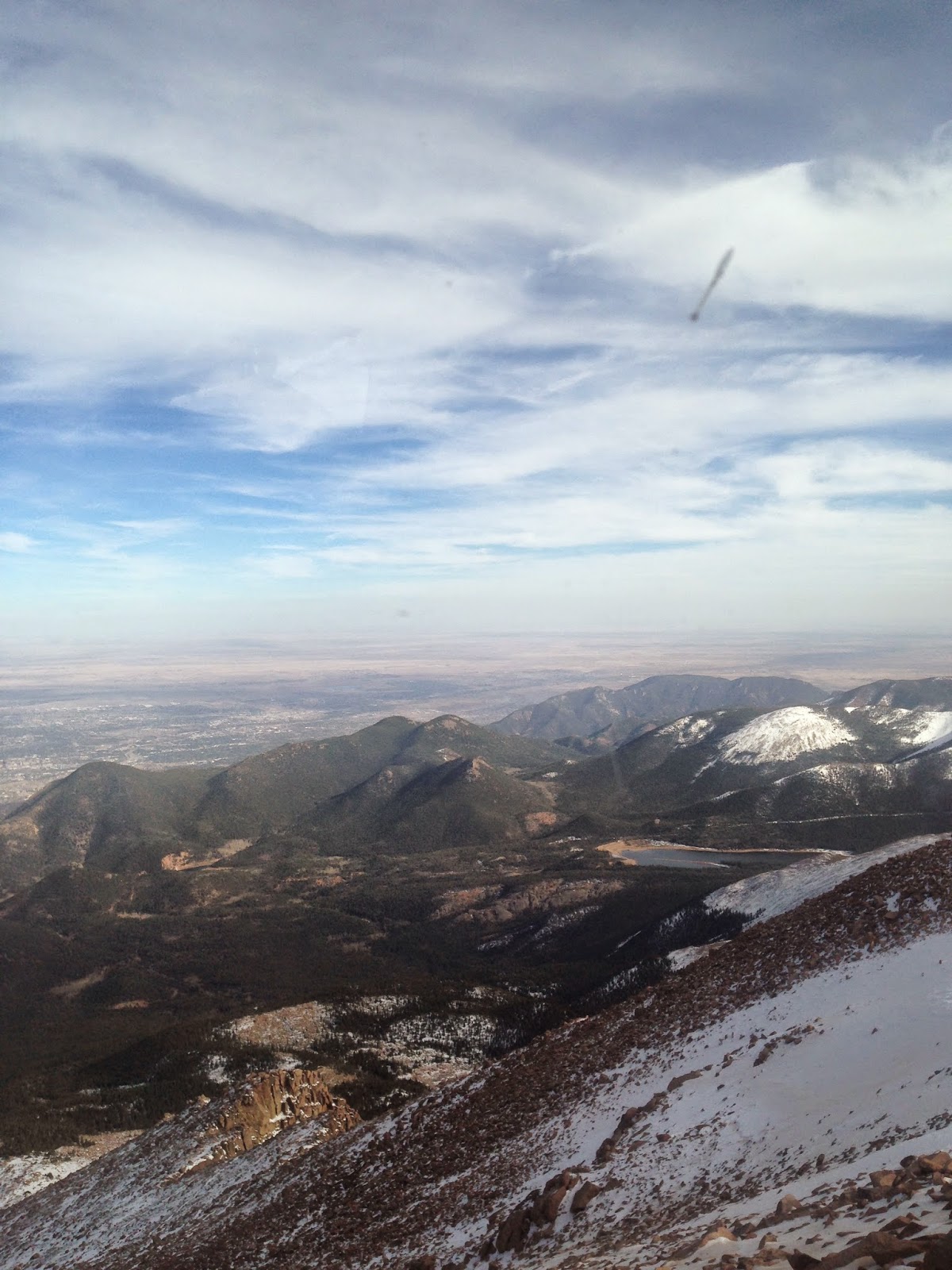 I even saw children playing computer games rather than looking out their windows.  It saddened me and angered me at the same time.  First of all, they had the best window seats and they weren't even looking out the windows, and then to find a silly techno game more interesting than this view was a sad commentary of our modern culture.  I wanted to scream at them "If your not going to enjoy your window seat, can I switch with you!"  But I didn't. 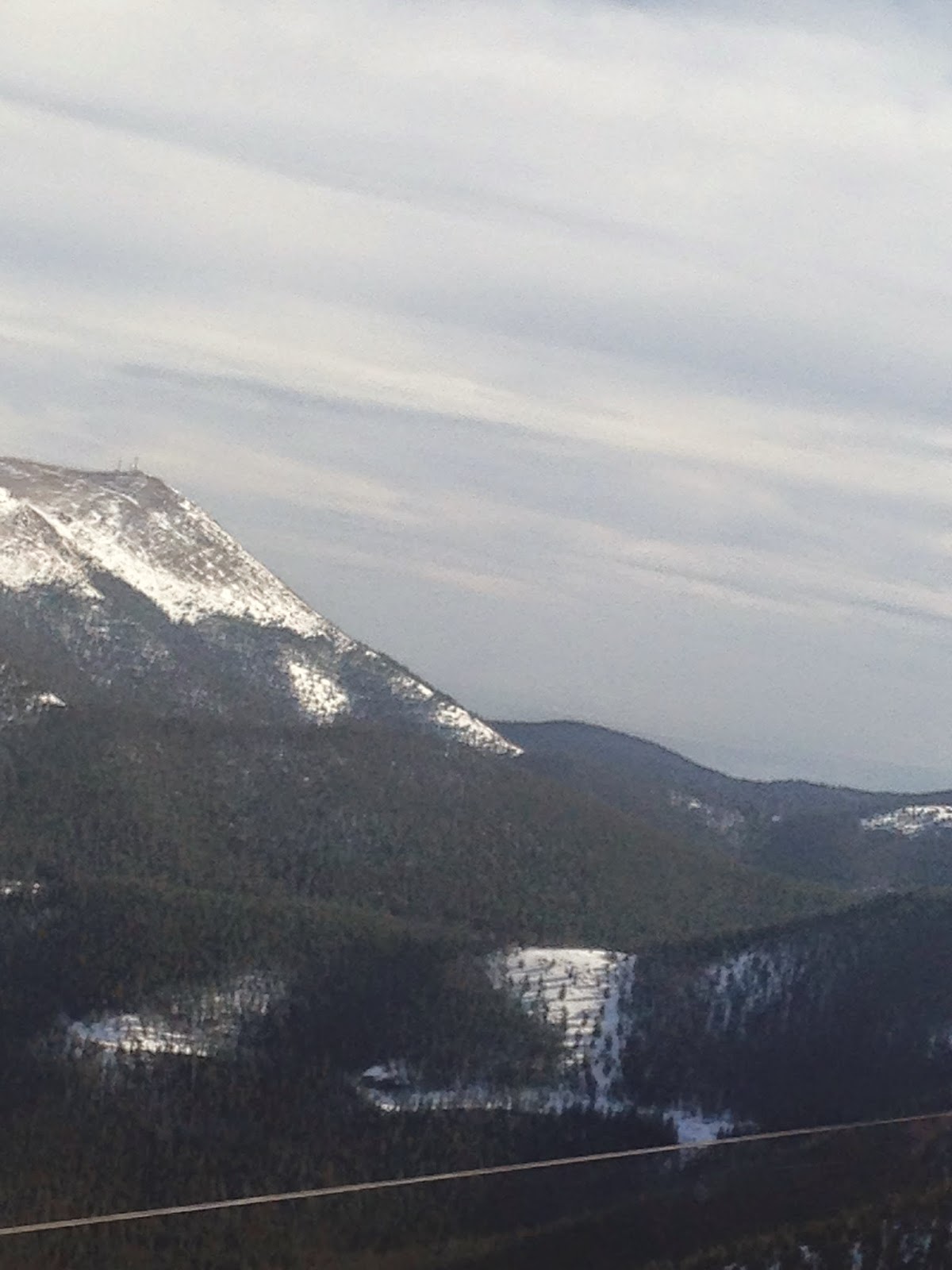 This was my first experience seeing snow capped mountains. I will say that as much as I hate snow, it does make for a pretty mountain picture. 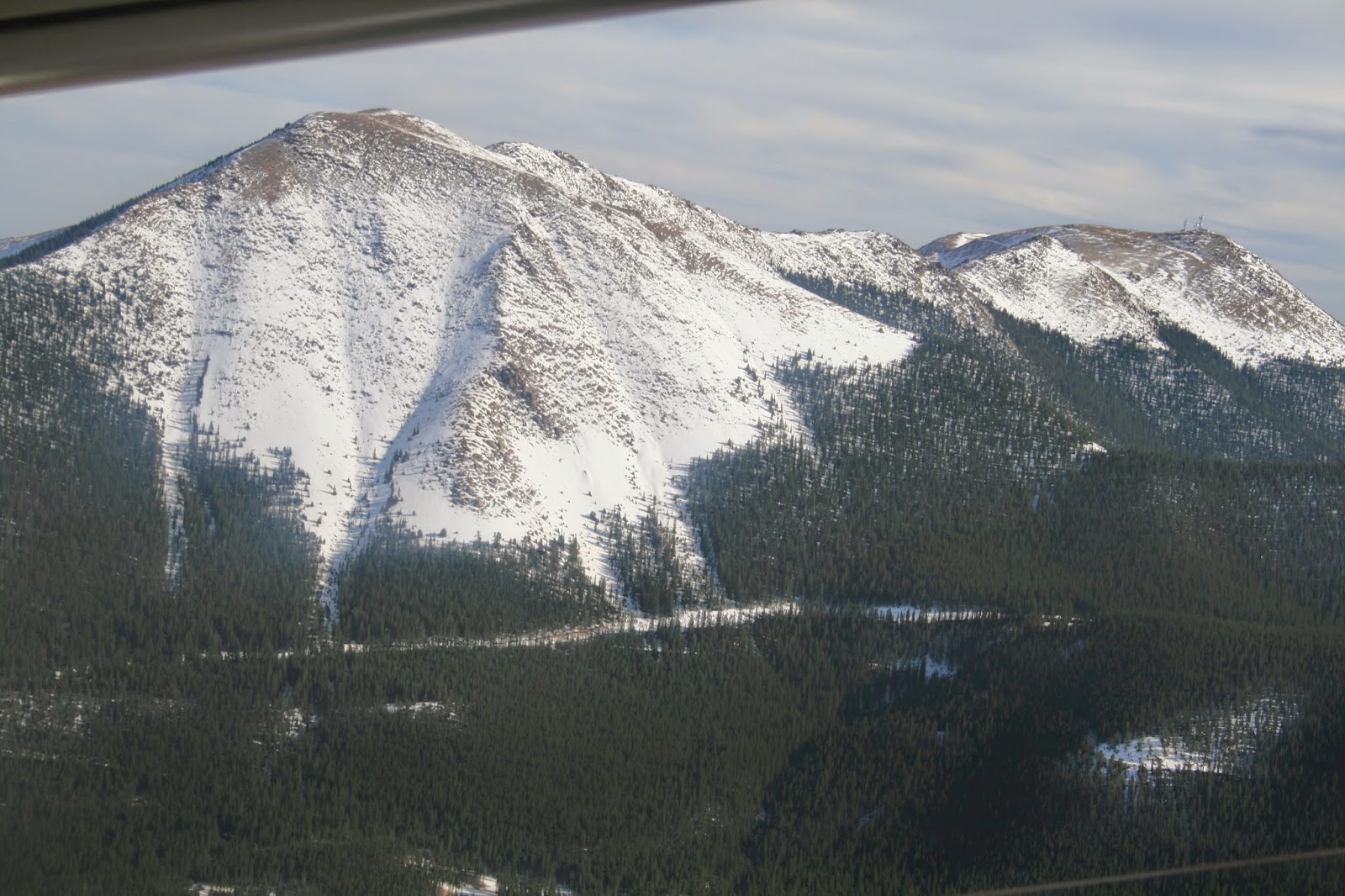 It was sad to come down from our mountain top and back to the base.  But it was much warmer, we peeled off those winter coats quite quickly.  And it's not as if we couldn't just look up and say 'Hi' to Pike's Peak from wherever we were at in Colorado Springs. 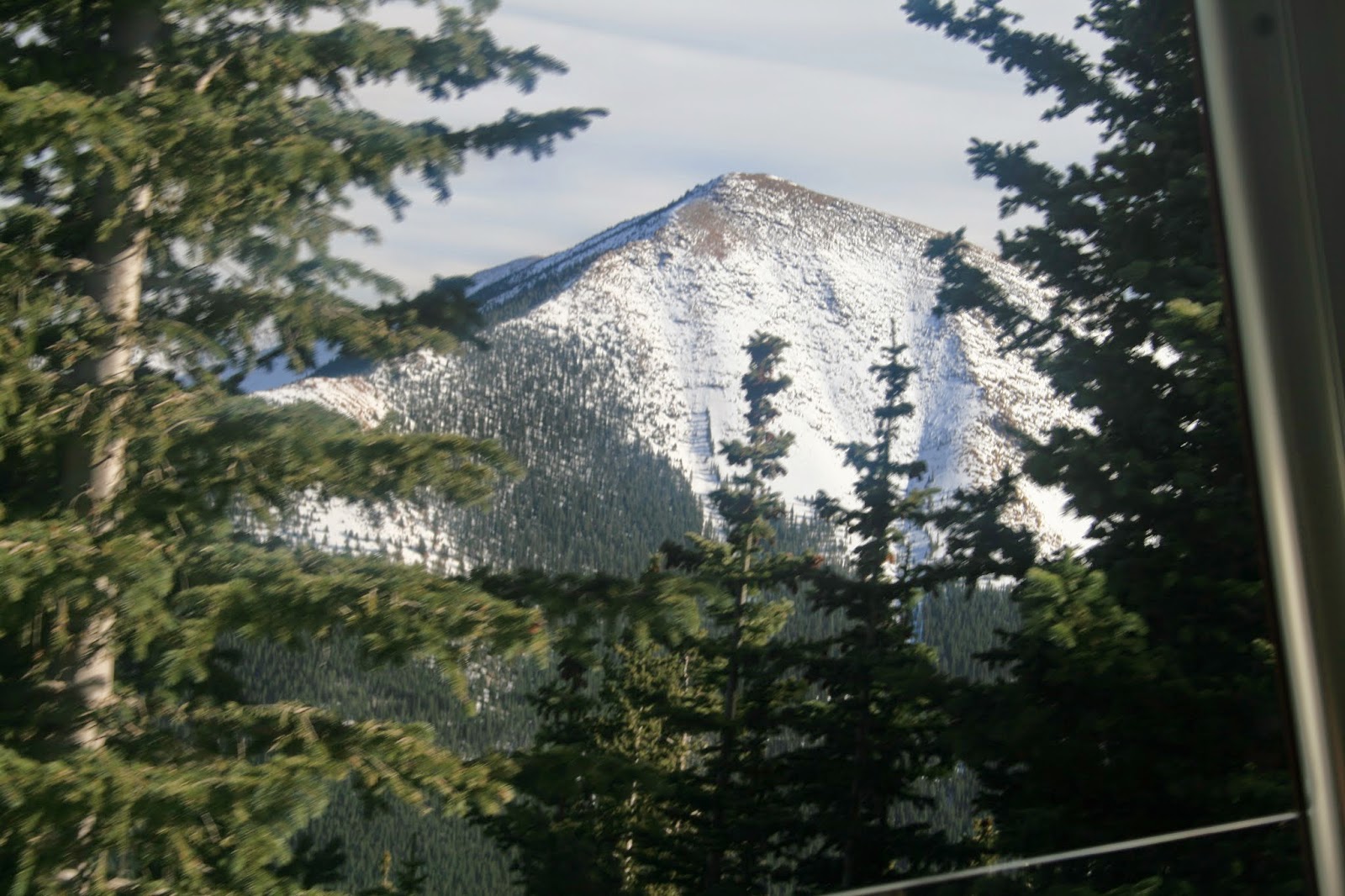 Well, this concludes my series of posts of our road trip out west.  I hope you enjoyed reading them as much as I've enjoyed writing them.  I don't know when I will be taking another big vacation to start a new series, but I will always have travel posts about my 'Staycations' to share.  In the meantime, I'll be back next week showing you all the treasures I found on my vacation and to share a little bit about our trip home.