Our Road Trip Out West: Day Five, The Sandia Mountains

Hello!  I'm back with another travel post of Our Road Trip Out West.  Today's post starts with the morning of Day Five, our trip up the Sandia Mountains.  If you missed my other travel posts,  just scroll down.

On the morning of Day Five we woke up early in our Albuquerque hotel excited to take a tram ride up to the top of the Sandia Mountains.  This was hands down my absolute favorite part of our trip.  The Sandia Peak Tramway takes you on a 2.7 mile ride to the top of a mountain 10,378 feet above sea level.  The views up are absolutely amazing as the tram can get so close to the magnificent rock formations. 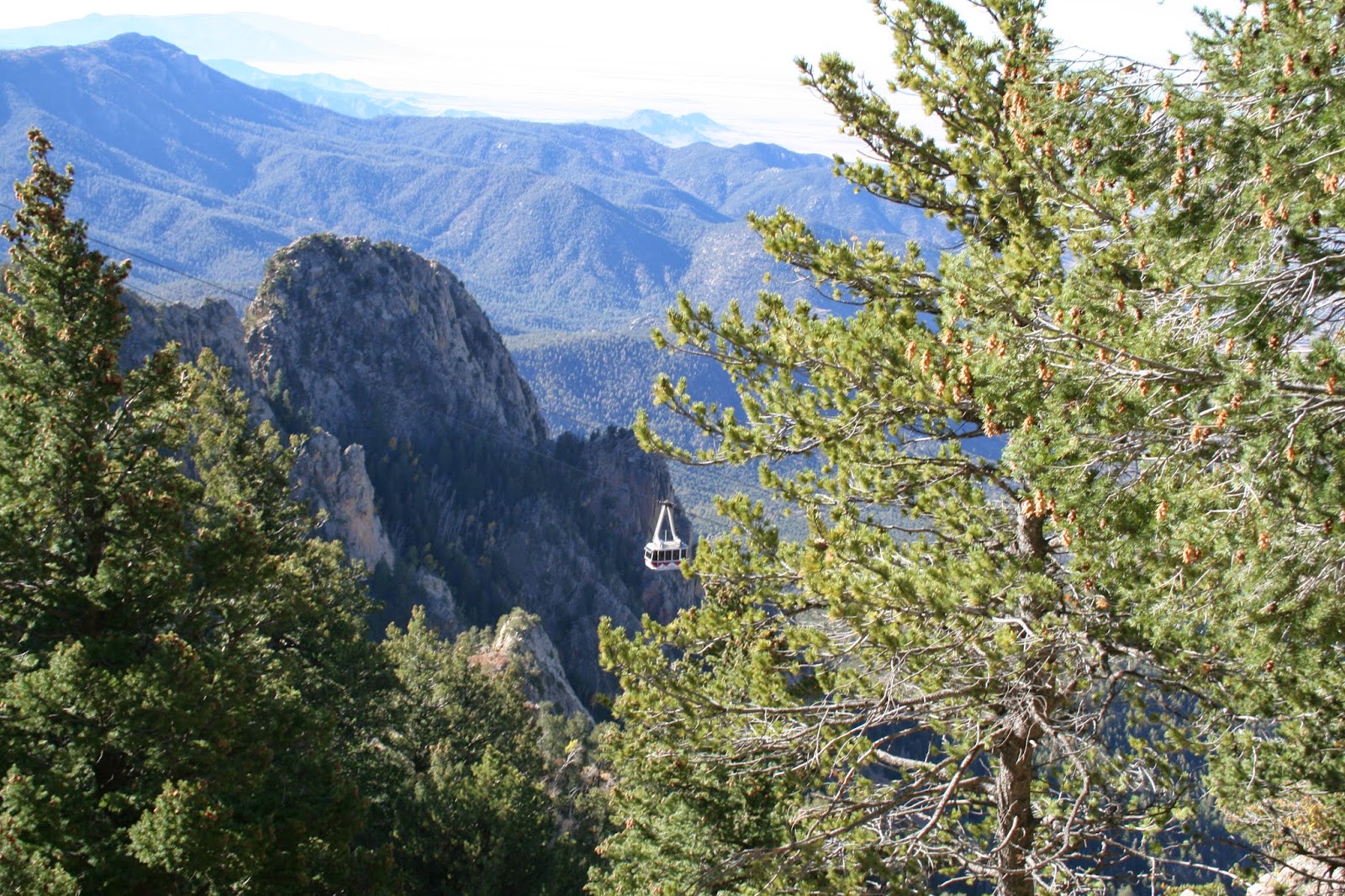 Now for those of you who have been faithful readers of my blog for years are probably wondering how did I handle my fear of heights?  I was not afraid one bit on this ride, and I felt very safe and secure.  I've learned when it comes to my fear of heights it's all about open space vs. closed space for me.  I'm not afraid to fly in an airplane, or go up to the top of the Willis Tower in Chicago.  If the space is enclosed, I feel just fine.  When the space is open:  such as the side of a cliff (more on that later), a balcony, or open staircases, that's when I start to freak out a little. 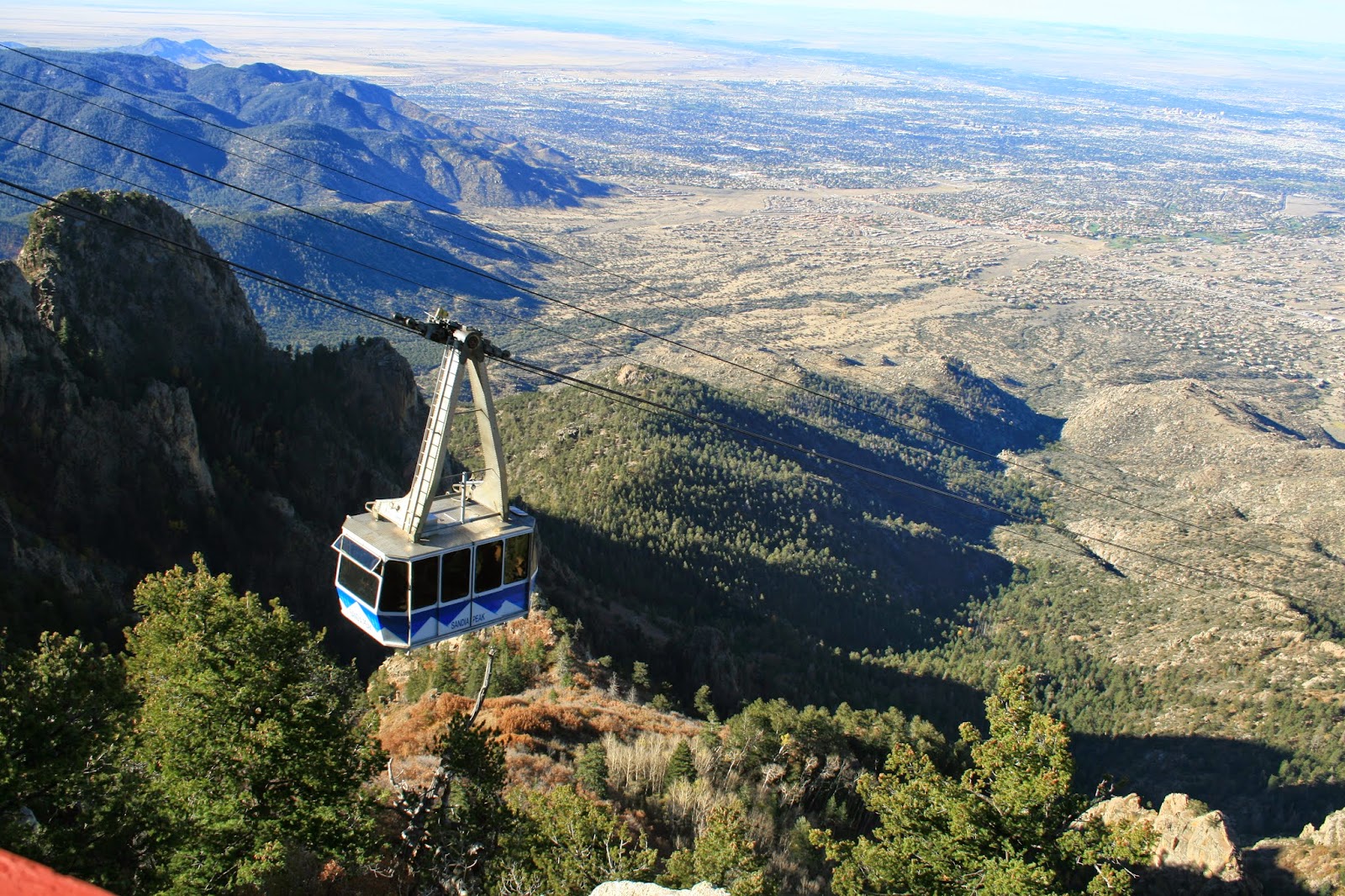 The tram ascends up about 4000 feet in about 15 minutes, with views of 11,000 square miles once up at the top.  The tram has large glass windows from the waist up, so you can see these gorgeous views.  I advise getting there very early in the morning however, because they can pack people in like sardines and you won't get a window seat like we did if you take a later tram.  We had unobstructed views on our way up and down, which was wonderful! 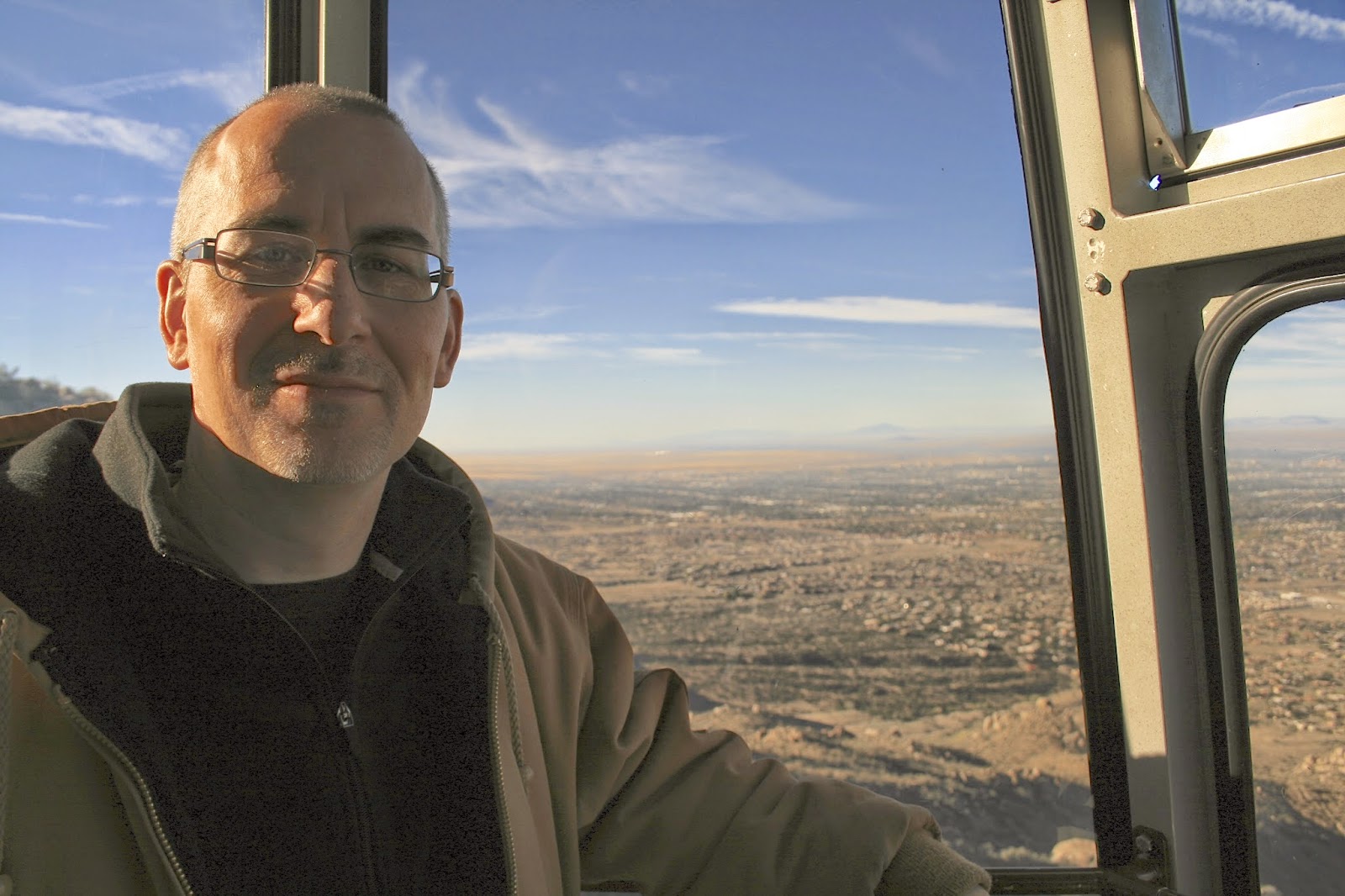 As you can tell from our yawning tour guide, it was the first tram of the day.  I had to chuckle at this guy at how horrible of a tour guide he was.  I swear he took a big yawn every thirty seconds.  I'm sure he's been up and down this mountain a billion times and is bored to tears about it, but he should at least show some excitement considering for most people it was their first time.  He told all about the history of the tram, it's construction, the distances you see, the heights you climb, and everything you need to know about the geology of the mountains and surrounding areas.  He just needed to be a little more entertaining.  I told my husband later, I would love to switch jobs with him and ride up and down this mountain everyday, seeing these gorgeous views instead of what I have to do for a living now.  Talk about a dream job! 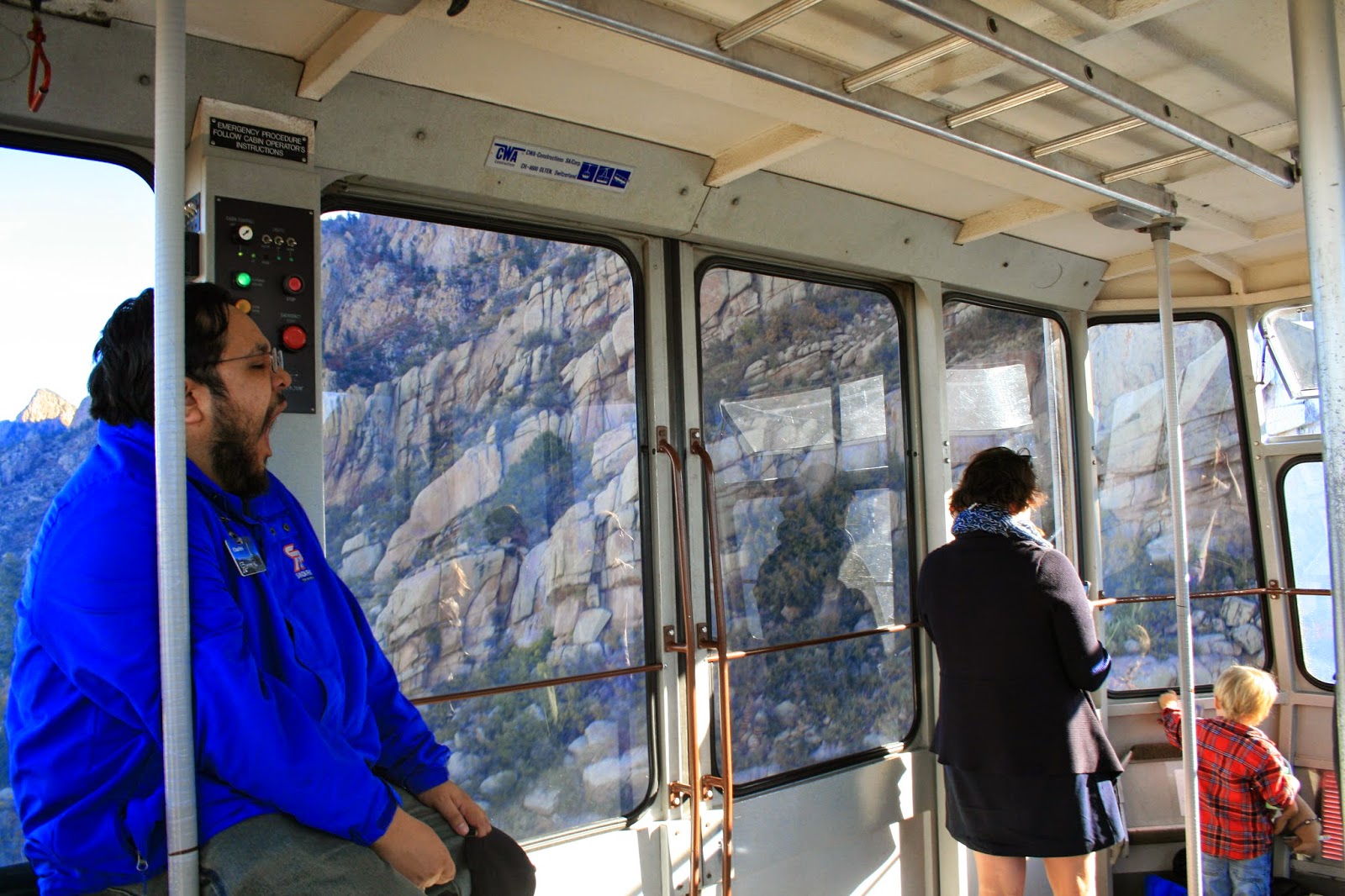 As you can see, there was hardly anyone in our tram.  It is capable of holding 50 passengers, and I think there were only six in our car.

Just look at these views:  I fell in love with the terrain of New Mexico on this vacation.  I don't know what it was about this magical landscape:  was it  because I had never seen terrain like this before in my life, or was it the color of the landscape and the endless blue skies unblocked by trees or human habitation?  I don't know, I just loved it. 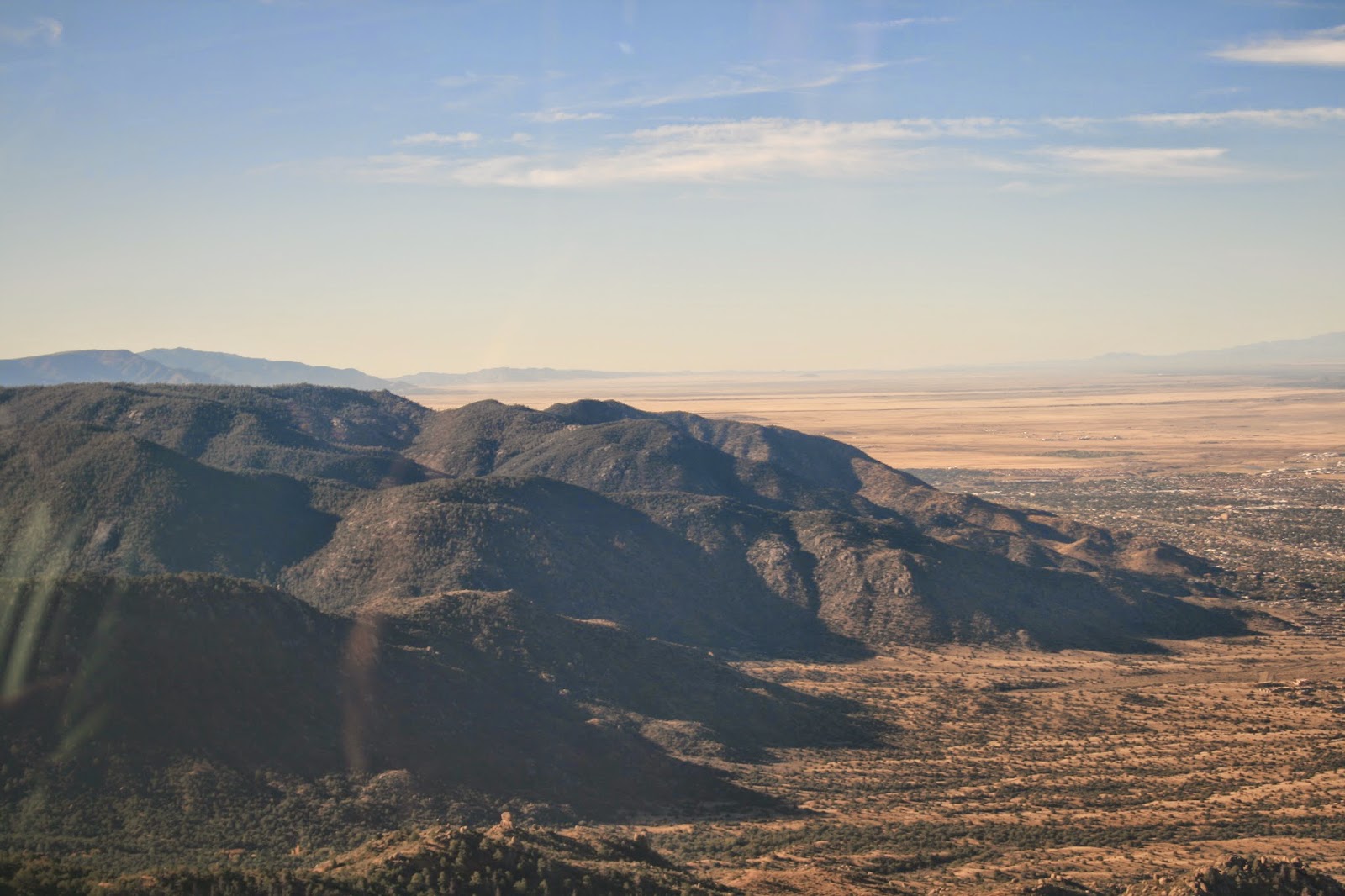 When you get off the tram there are multiple observation decks with panoramic views of the Sandia Mountain Range.  In this picture, I was nervous.  Of course the deck has a railing and it is stable, but it's very windy on the top of a mountain, and the deck overhangs the cliff, so I was uncomfortable in my surroundings and only stayed long enough for a quick peak and picture.  If your wondering why I have a winter coat on, it's because it's 20 to 30 degrees colder at the top of the mountain than it is below.  It was in the sixties before we got on the tram, and 15 minutes later, we were in need of our winter coats. We were well prepared this time after our North Carolina and New Hampshire mountain adventures, where we had no idea of the extreme temperature changes and FROZE, so we had the foresight to bring our winter coats with us to New Mexico! 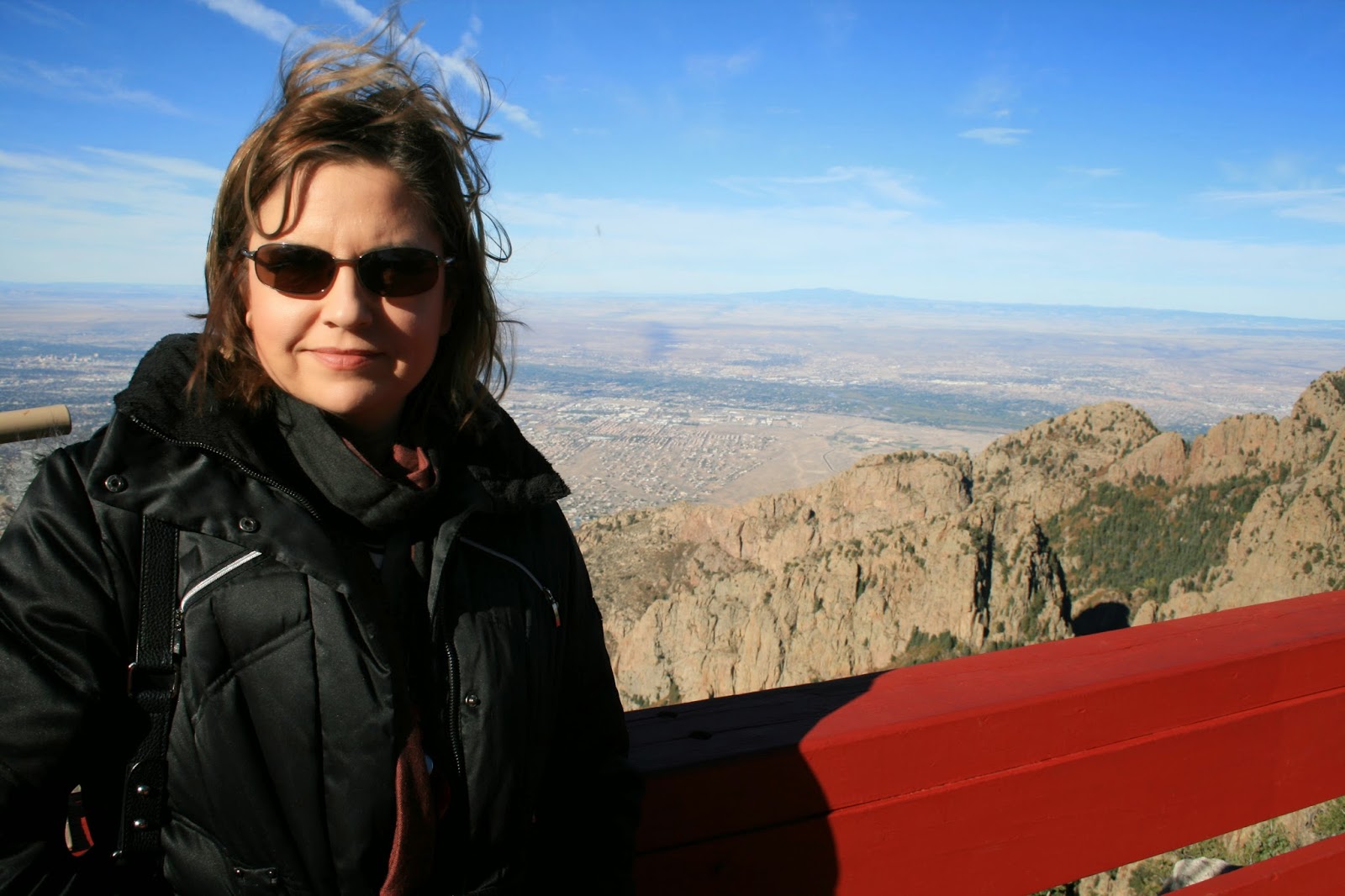 Another view from one of the observation decks. 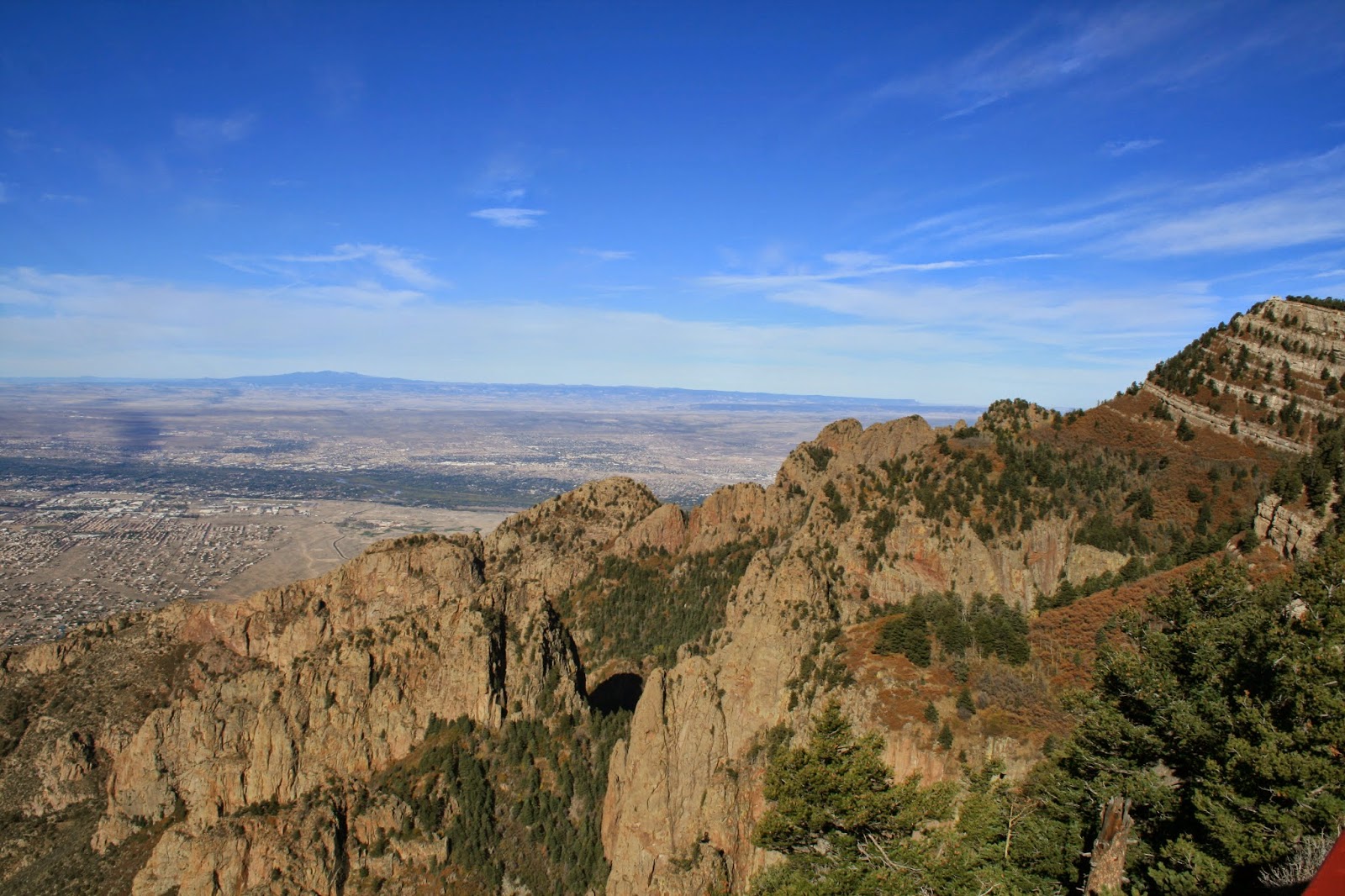 Here is another observation deck and also a ski lift.  Yes, they do ski in New Mexico. 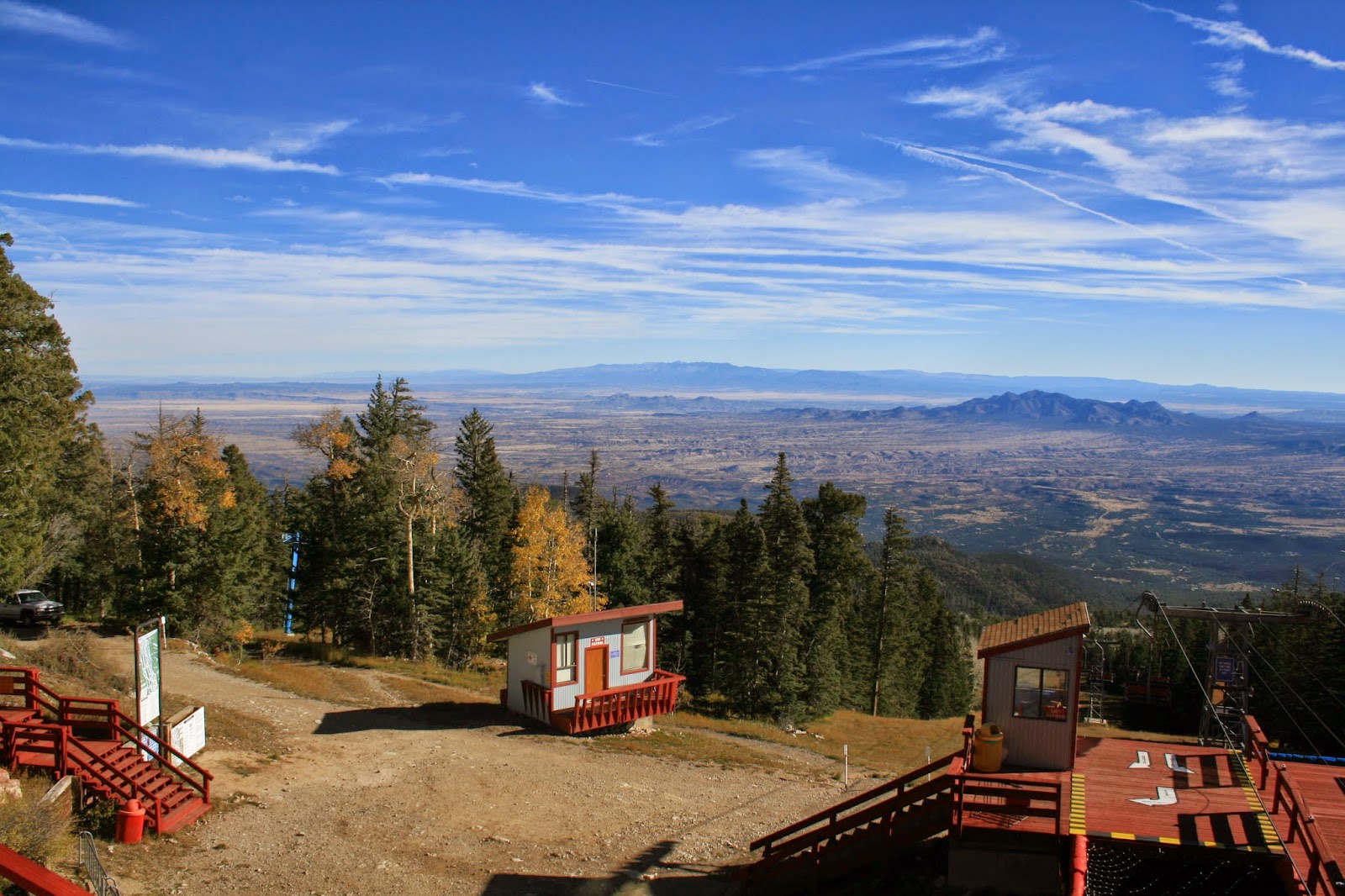 Here's a picture of my hubby and I that a friendly tourist offered to take of the two of us.  I love it when people offer to take our picture.  So often our vacation pictures are solo shots, and it's so nice when someone offers to take a couple shot for us. 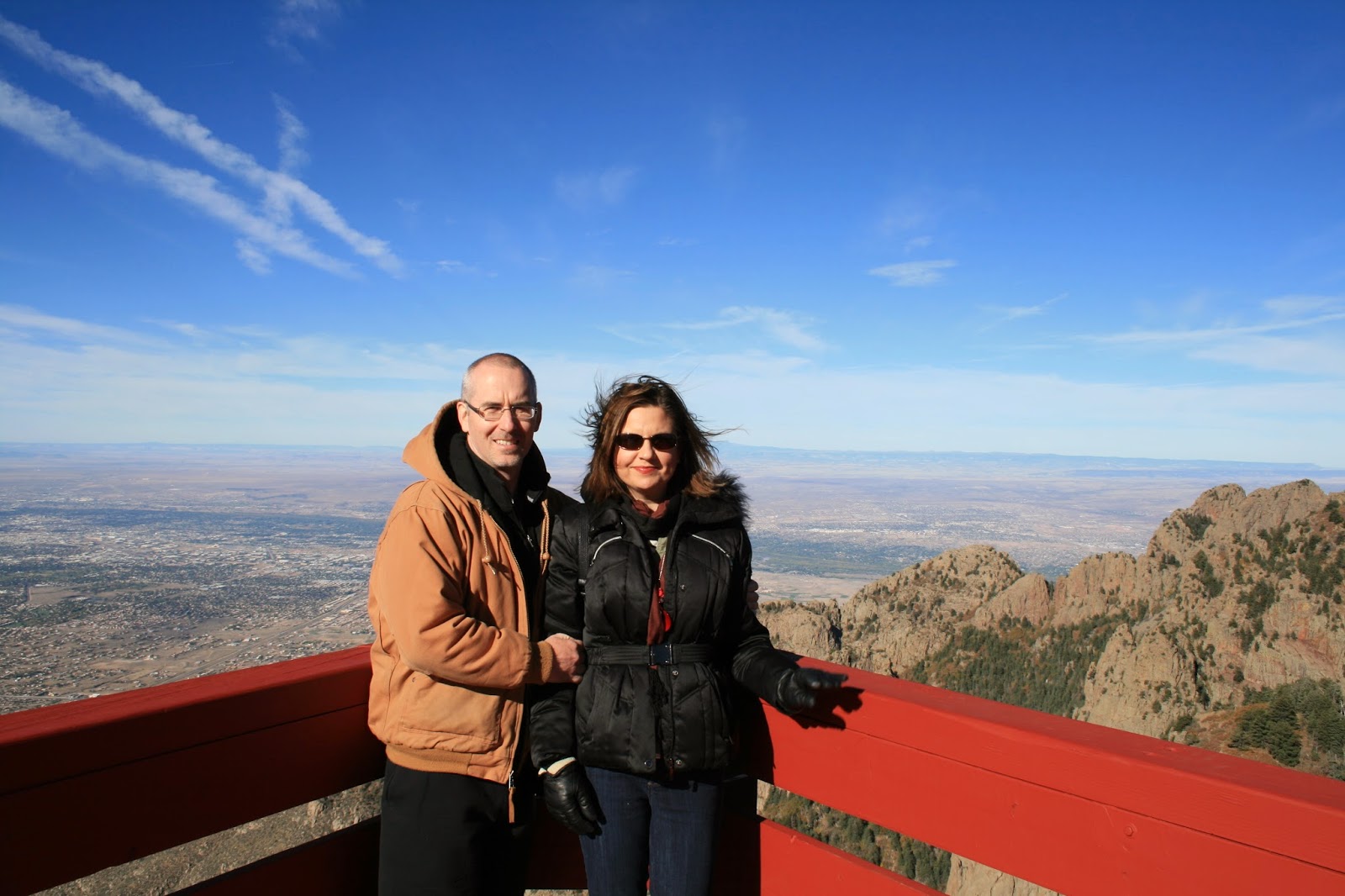 The cost of the tram is $20.00 for an adult ticket, less for children, teens, and seniors citizens.  I thought that was such a reasonable and affordable cost for such an amazing attraction.  My favorite part about the tram (other than the views) was that there was no time limit for how long you stayed at the top.  You just had to be sure to be on the last tram for the day (if you wanted a ride down) or you would be spending the night up there or hiking down! 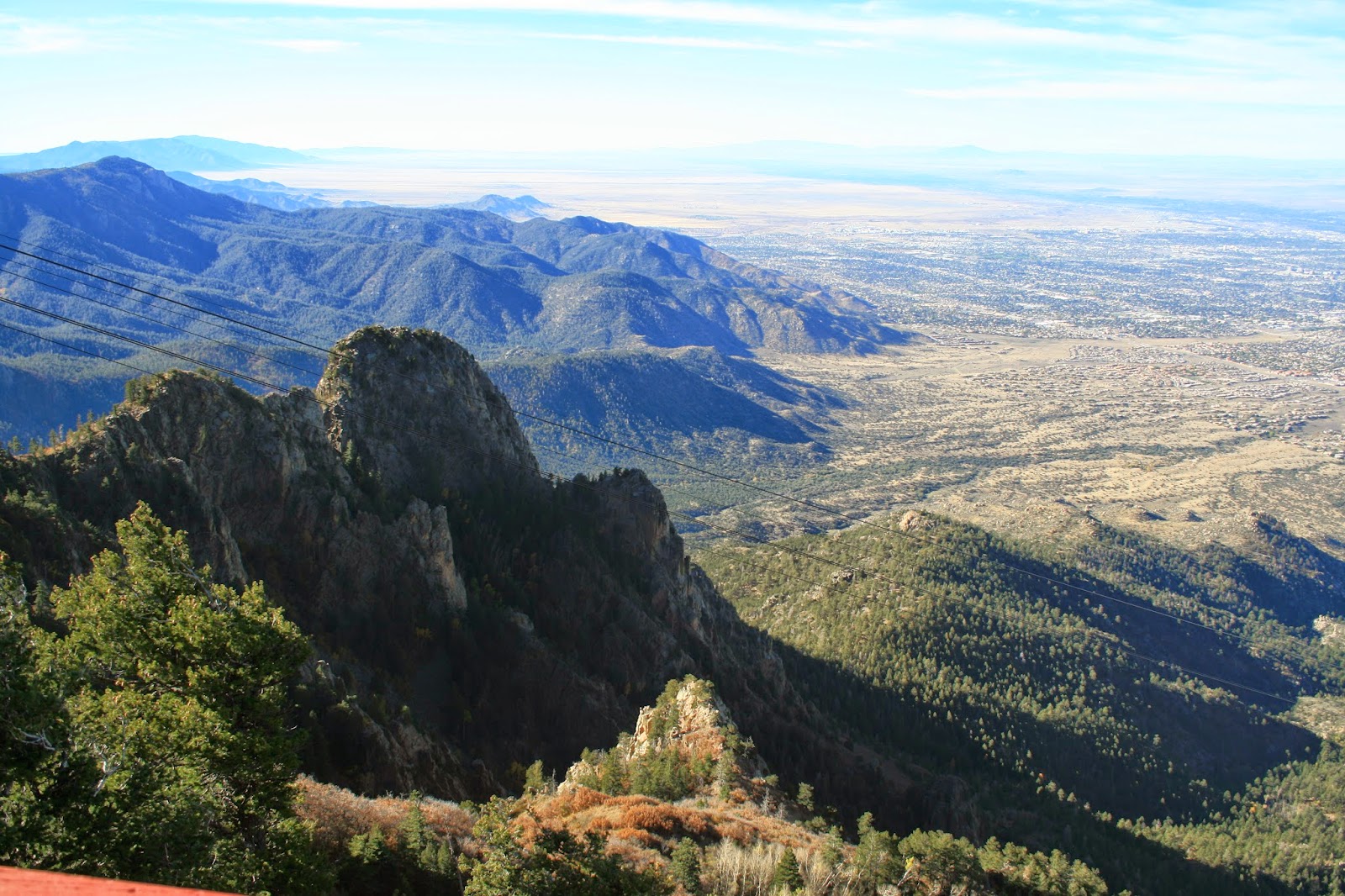 There are multiple hiking trails you can enjoy in this forest.  We started out taking a trail that was on the edge of the mountain.  The views were spectacular, as you can imagine any view would be when your standing on the edge of a cliff, but we didn't go far on this trail because I was such a nervous wreck that I or my husband would lose our footing and plummet 4000 feet to our deaths.  This trail also started to descend the mountain because we were already at the top, and we knew if we didn't turn around at some point, we'd either have to hike the rest of the way down, or hike back up to catch the tram. 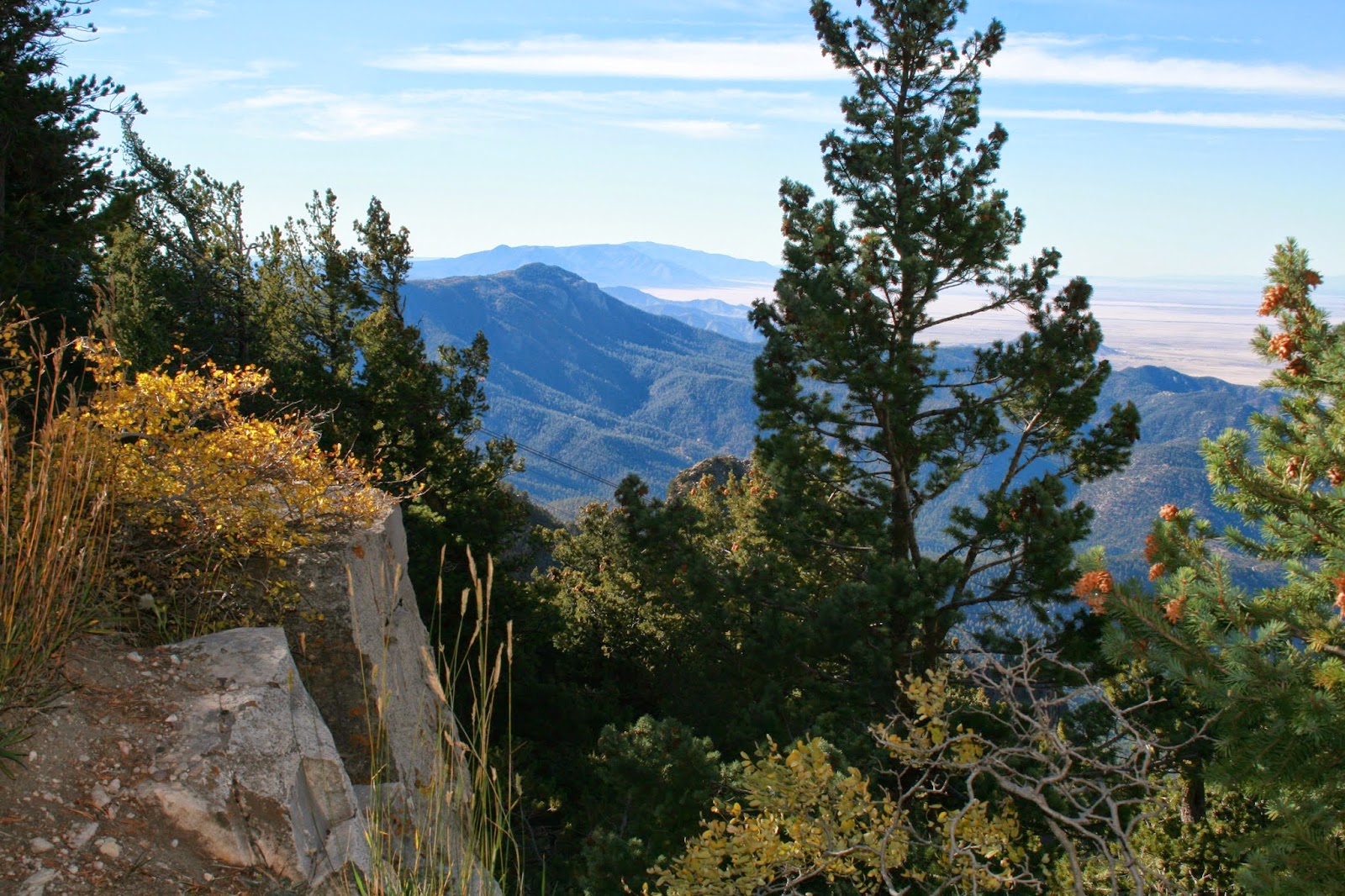 My husband made me sit on this rock to capture this view.  Where you see the end of the rock behind me is a steep drop off the mountain side.  This was as close as I would get to the edge.  I will say that the trails in this forest were very well maintained and well marked.  I was not nervous at all about getting lost in the forest, unlike our New Hampshire hiking adventures of last summer.  The only thing I was nervous about was running across a bear or large cat.  But the only animal life we encountered was a fox, some very friendly squirrels, and lots of birds.  I recognized the bird calls of the finches, because we use to have finches as pets in our home.  They make a 'beep, beep' sound.  We don't have them in Wisconsin, so I never heard them in mass in the wild before.  It was quite interesting. 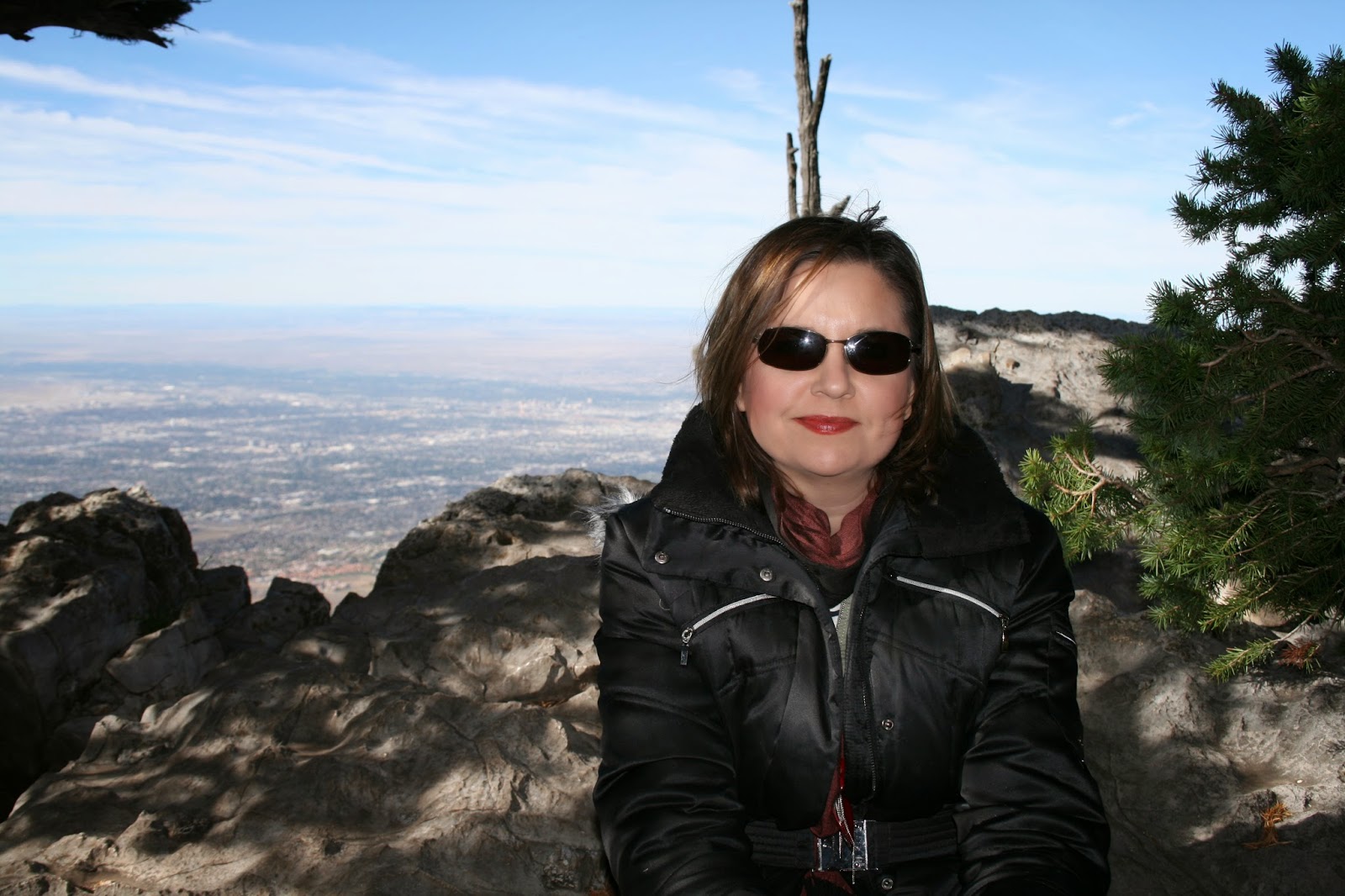 What we really loved about this mountain range was all the beautiful trees of the forest:  the hardy pines, aspens, oak, fir, and spruce trees.  Most mountain summits don't have a lot of trees because the climate is too severe for them to sustain life.  In North Carolina when we were up in the Smokey Mountains, we saw a lot of trees that had no needles, they looked more like tree stumps than trees.   We were told it was because of damage done by acid rain.  Then in New Hampshire,  there were lots of trees until you got to the top of the White Mountains, but then it was just solid rock and no life whatsoever because the winds were so strong and the temperatures were bitter cold.  The Sandia Mountains do not get quite as cold because it is a warmer state and the elevation isn't quite as high because the entire state's altitude is higher than it's eastern counterparts. 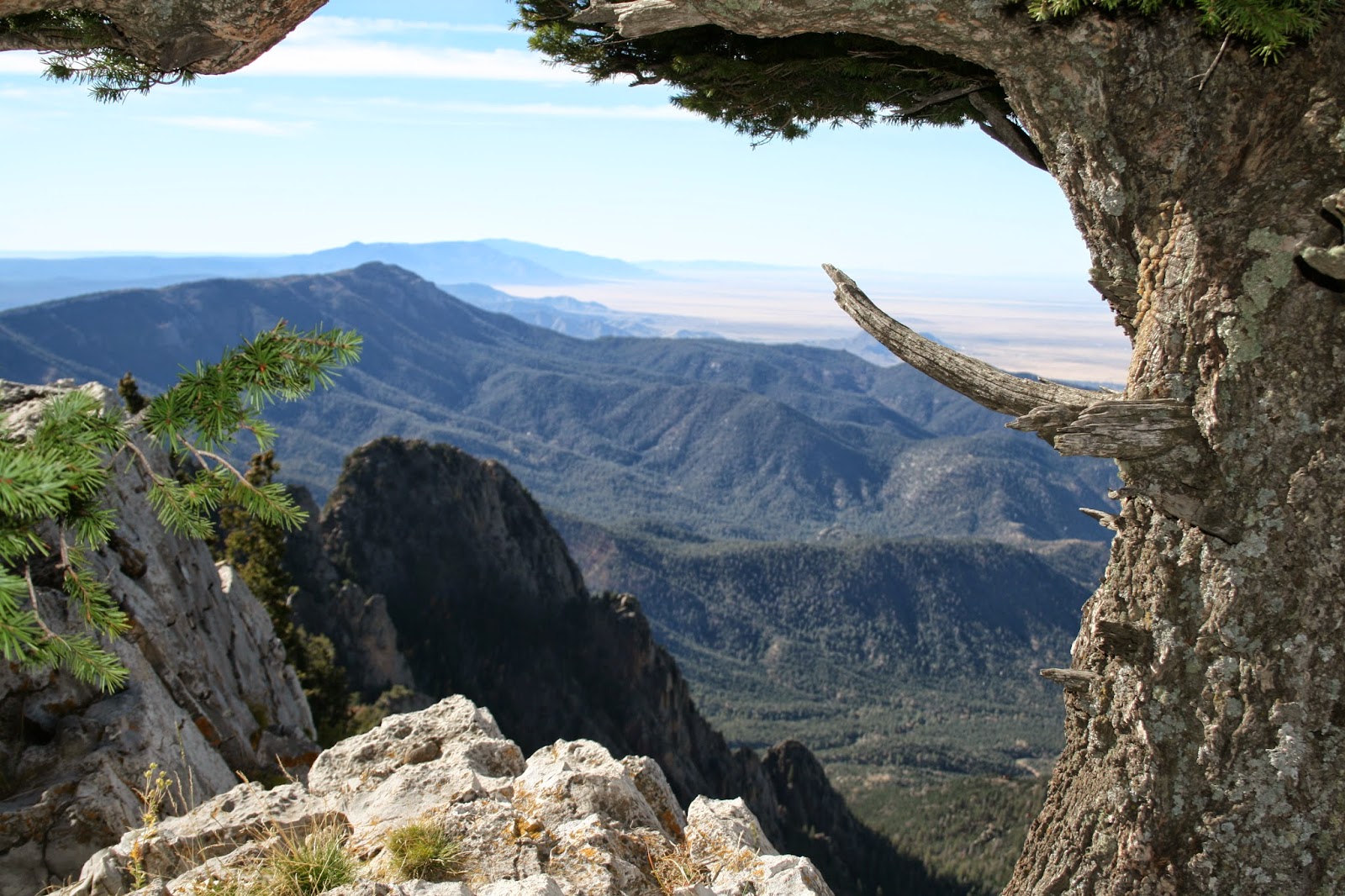 In the picture below there is a very tiny stone structure built on the very tip of this mountain.  Do you see it?  It's on the top edge, right in the middle?  We saw this house on the tram ride up so my husband wanted to hike to it and take a closer look.  It is called The Kiwanis Cabin and is built on a slanted slab of nearly bare rock.  It was built by the Civilian Conservation Corps in 1936. 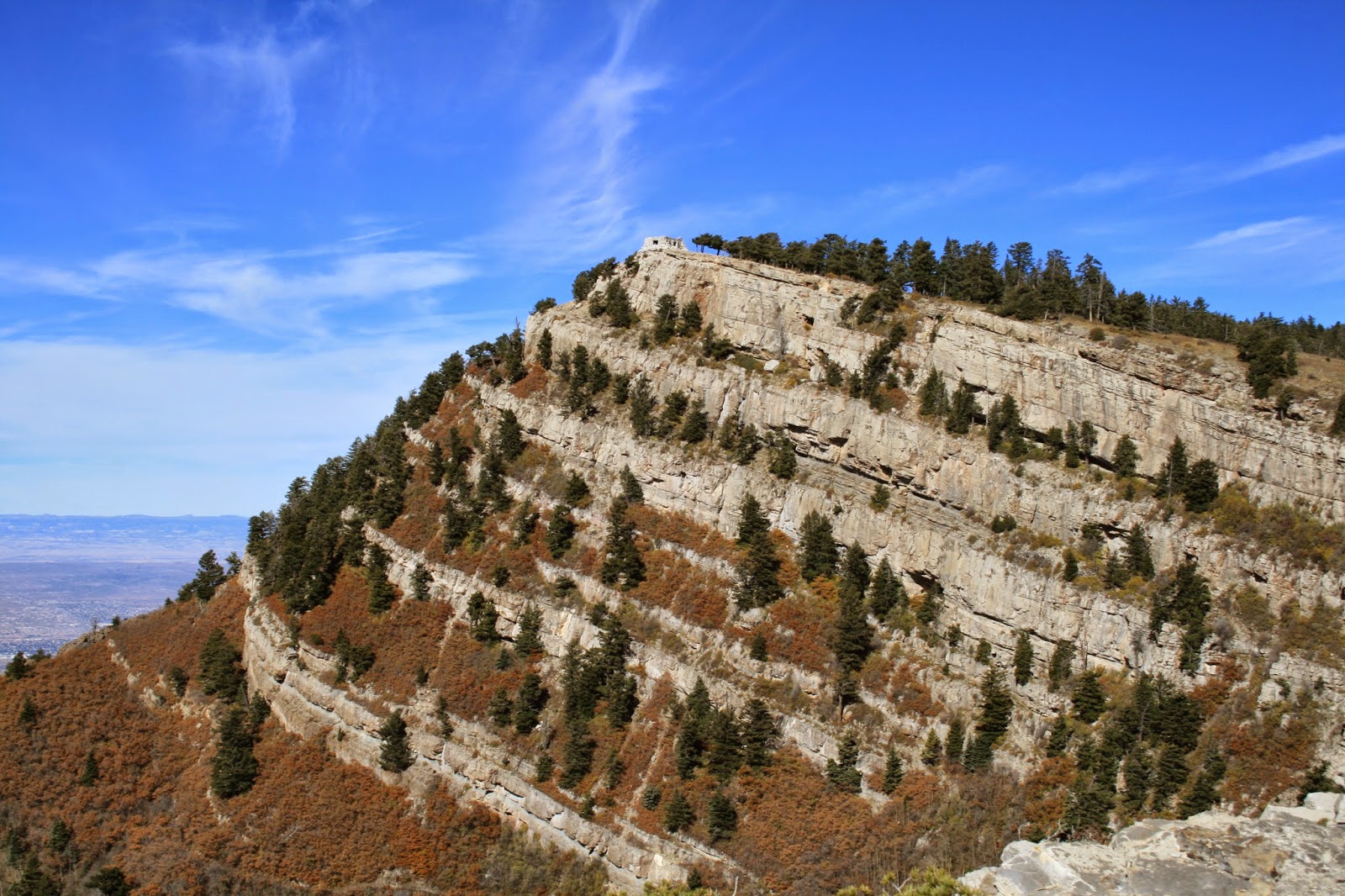 The trail is to the cabin is about a mile and a half and you walk mostly on a level path through beautiful shaded forests to get there.  We loved to just walk quietly and listen to the sounds of the forest such as the beep-beeps of the finches, and the scampering of squirrels through the leaves.  The squirrels seemed extremely friendly, and even ran right across my path.  I had the feeling they were use to being fed by tourists as there is a dining establishment on top of mountain with both indoor and outdoor seating.

Here's a picture of me walking on the hiking trail.  This is my old winter coat by the way.  The one I told you I wanted to replace with my new one in THIS POST because it was too short and didn't keep my legs warm. 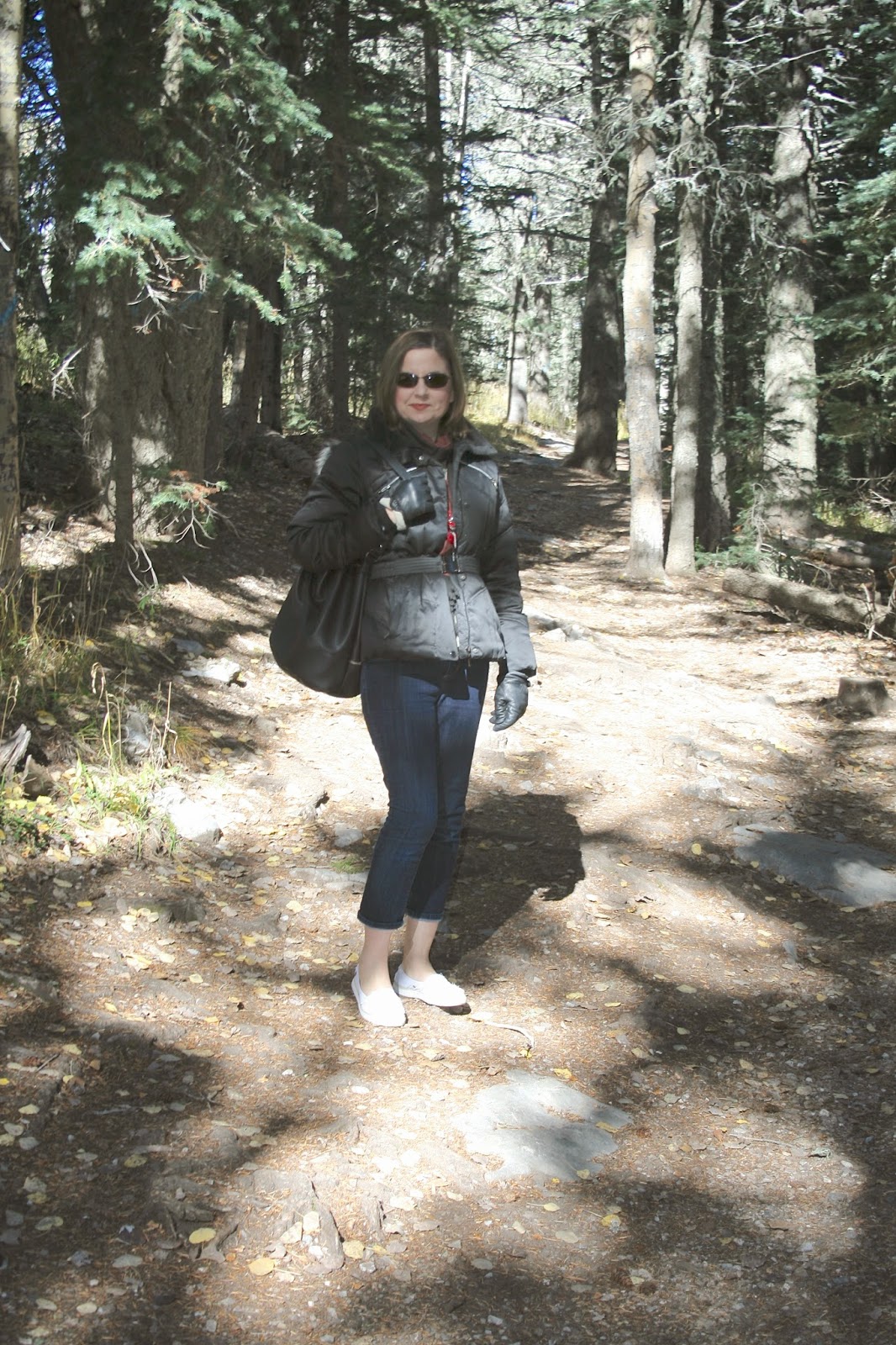 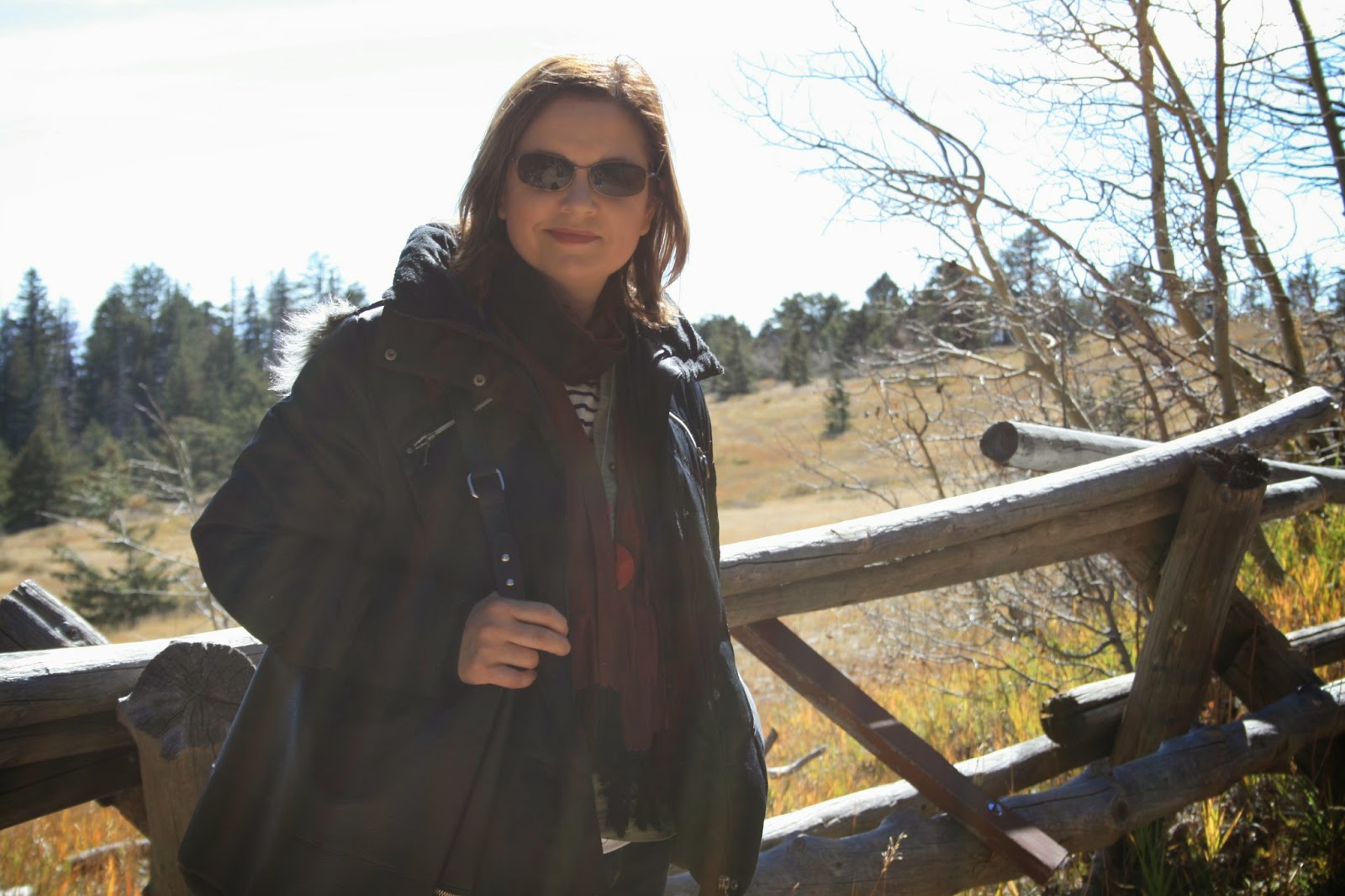 After walking through the forest, you eventually come to a sunny meadow where mule deer are often spotted.  Unfortunately, we didn't see any on the day of our visit.

We were so excited we finally reached our destination:  it seemed like a long walk and although we would have loved to have spent the entire day up on the mountain exploring all the trails, we were scheduled to meet our son-in-law in Albuquerque in the afternoon, so we only had the morning to explore. 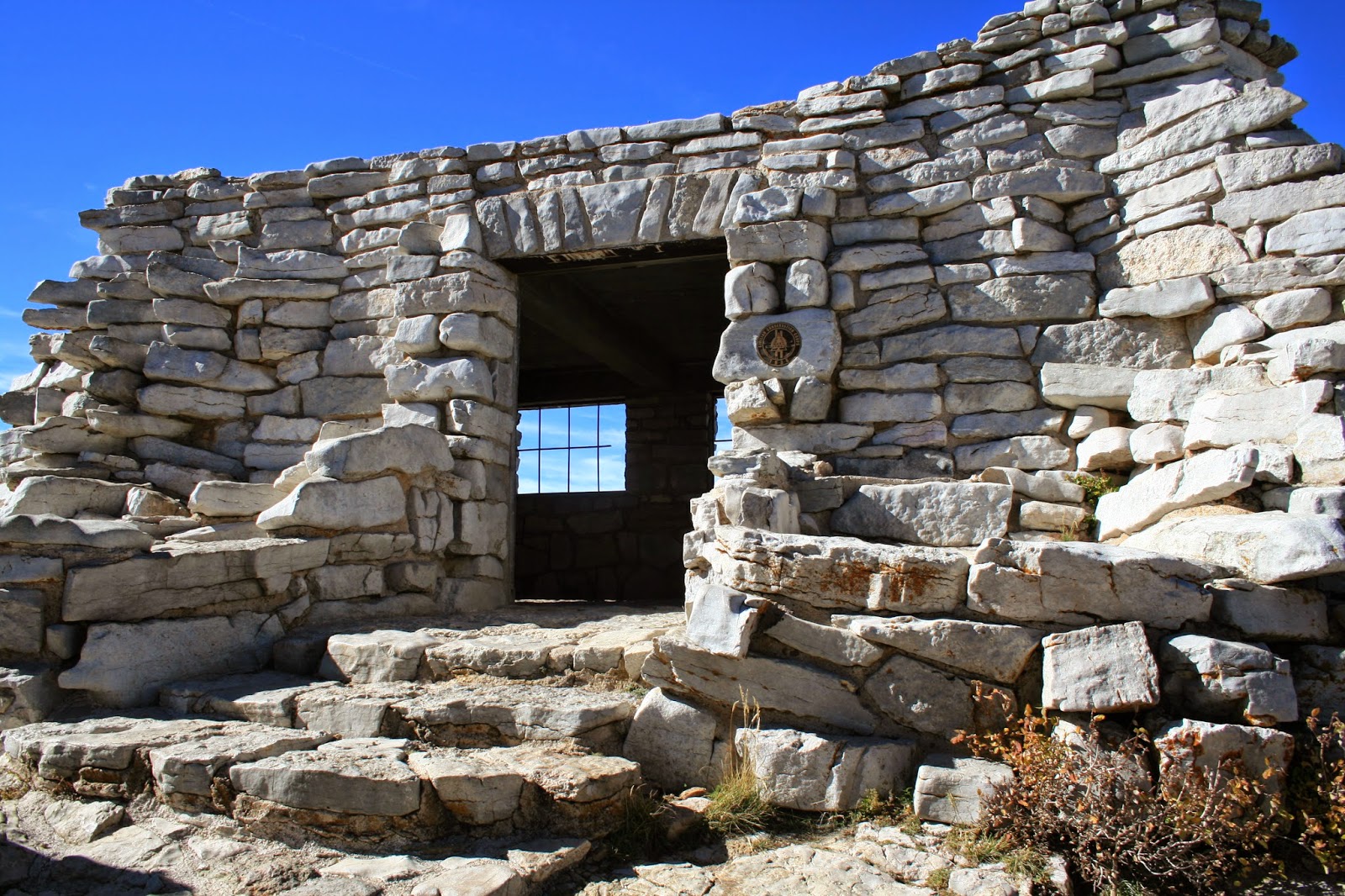 The picture above is the outside of the structure.  You can go inside and look out the windows. 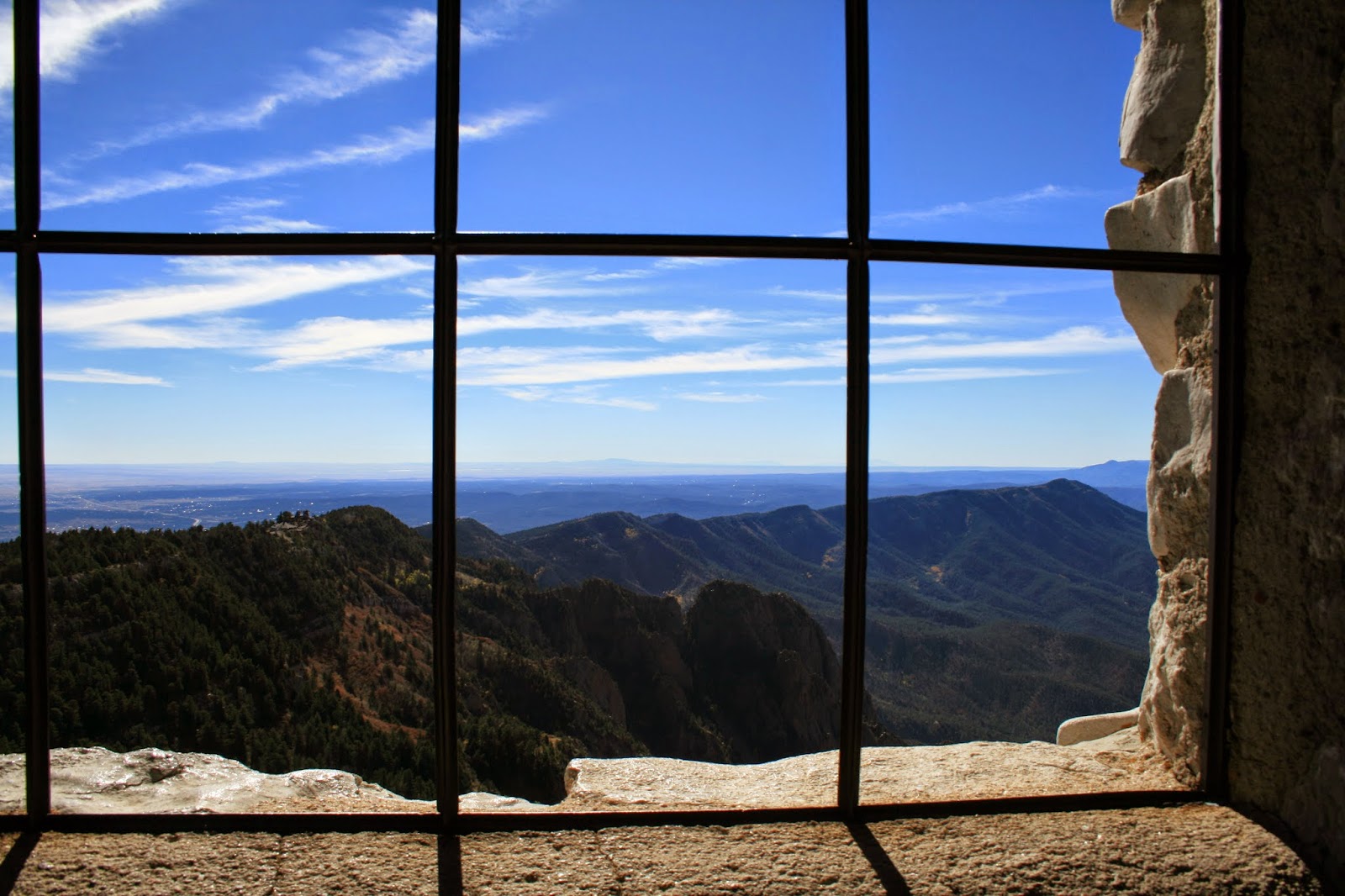 This is my husband standing proudly outside the cabin.  The views from this spot are spectacular! 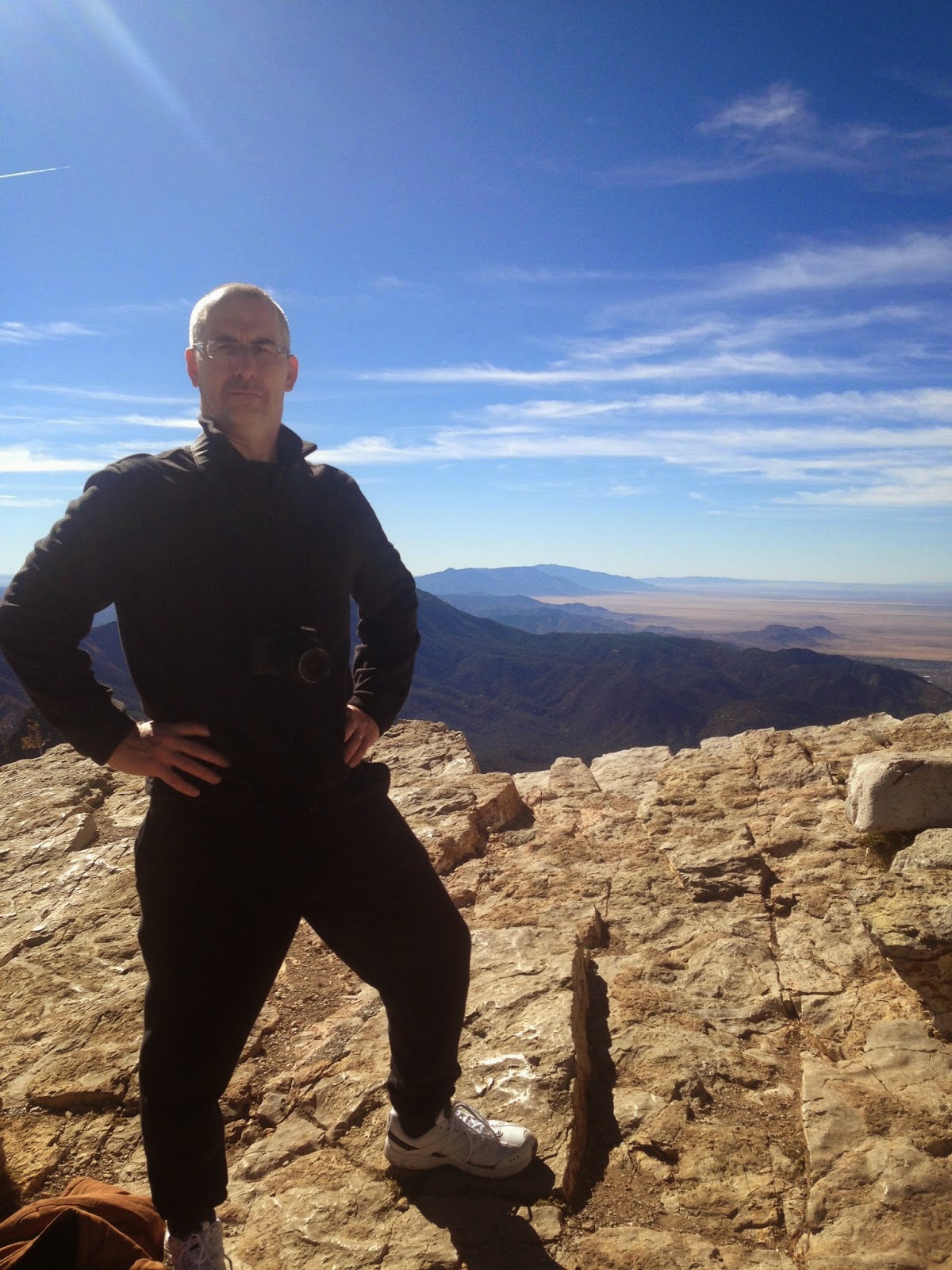 After a brief stay at the cabin, we knew we running out of time for our afternoon appointment, so we hiked quickly back to the tram and began the descent down the mountain.

Again, we were blessed with gorgeous mountain views and we loved how close the tram came to the rock formations.  Do you see the shadow of the tram in the picture below?  The shadow really helps  give perspective of the size of these mountains. 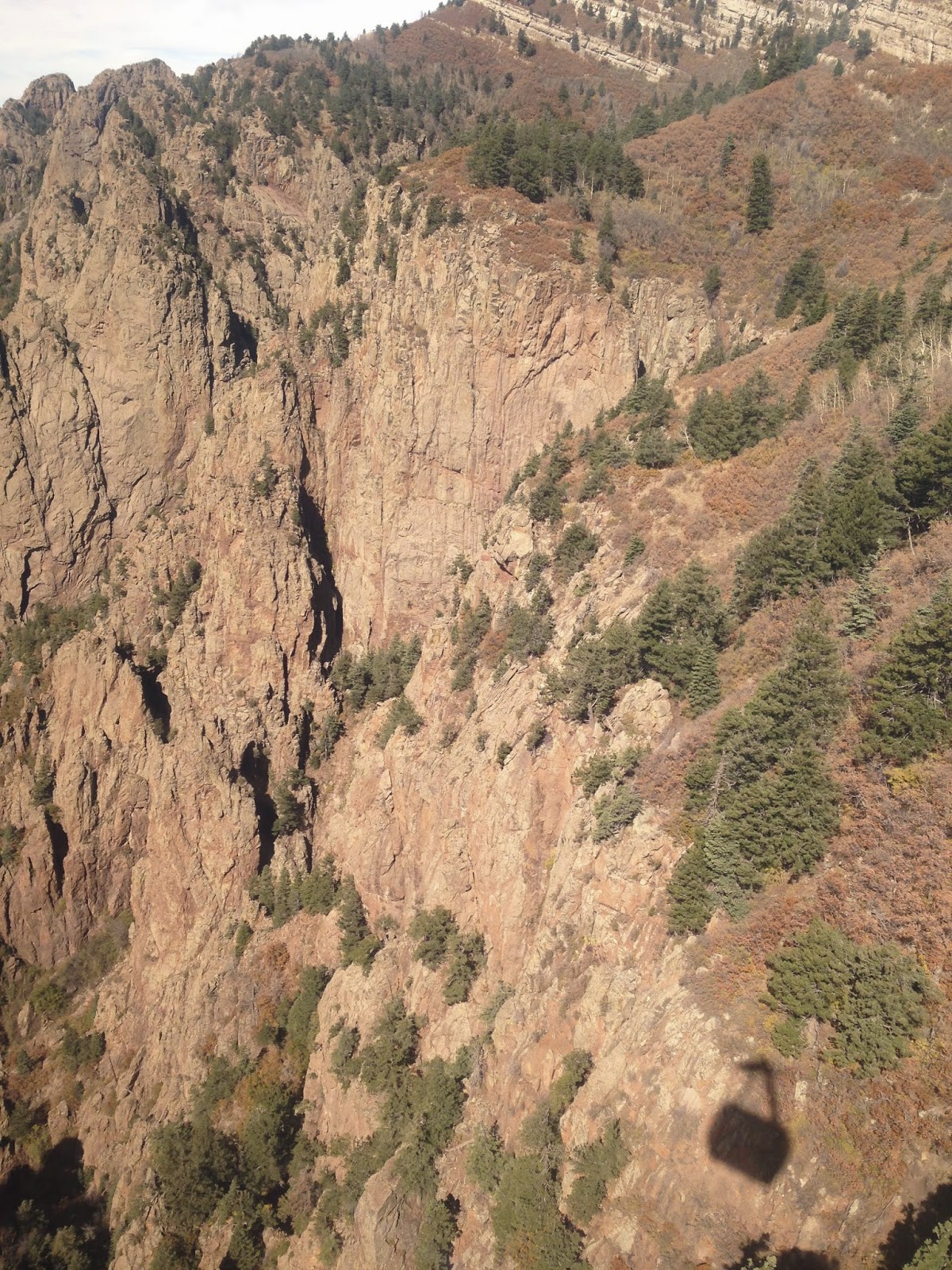 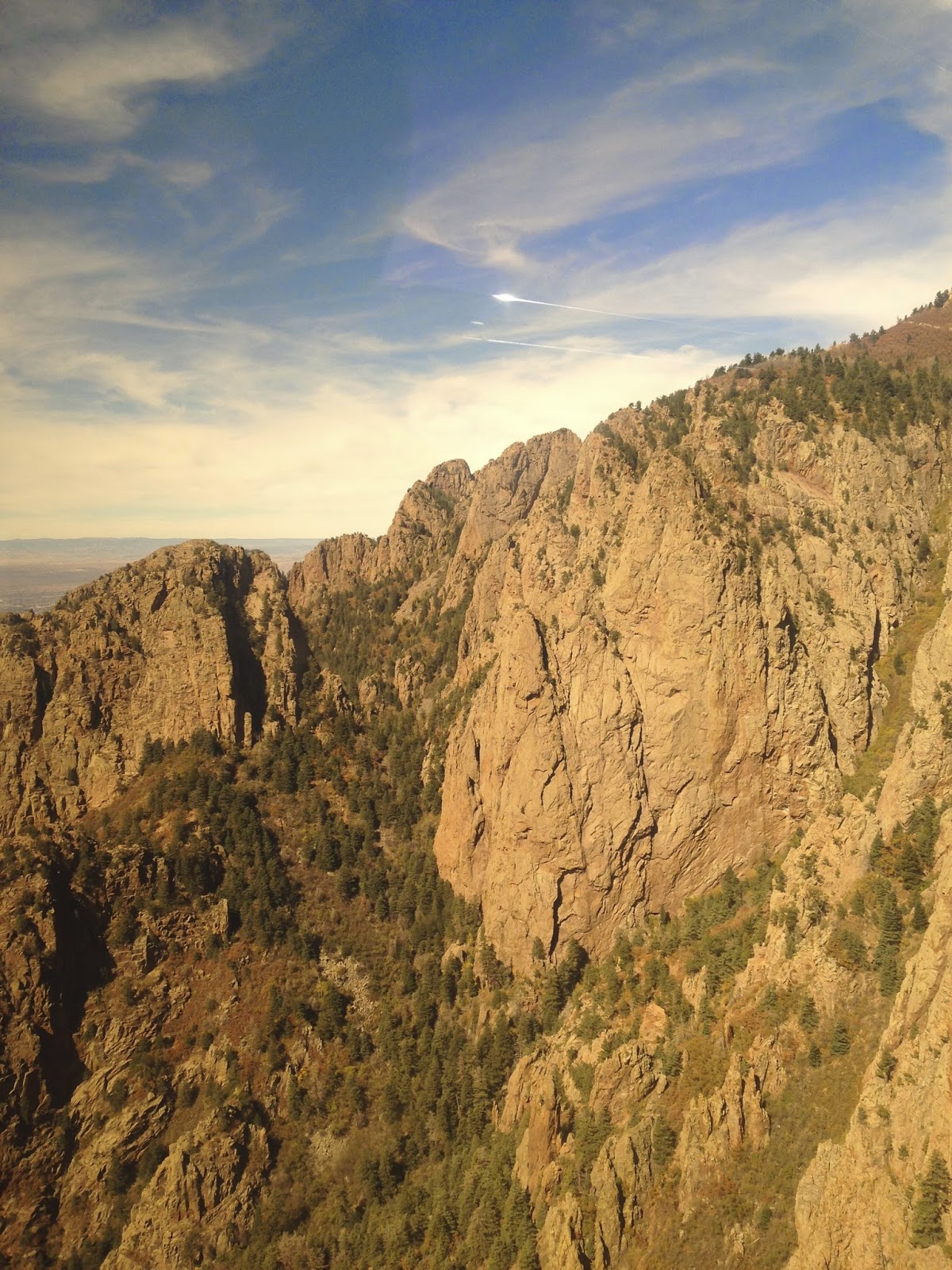 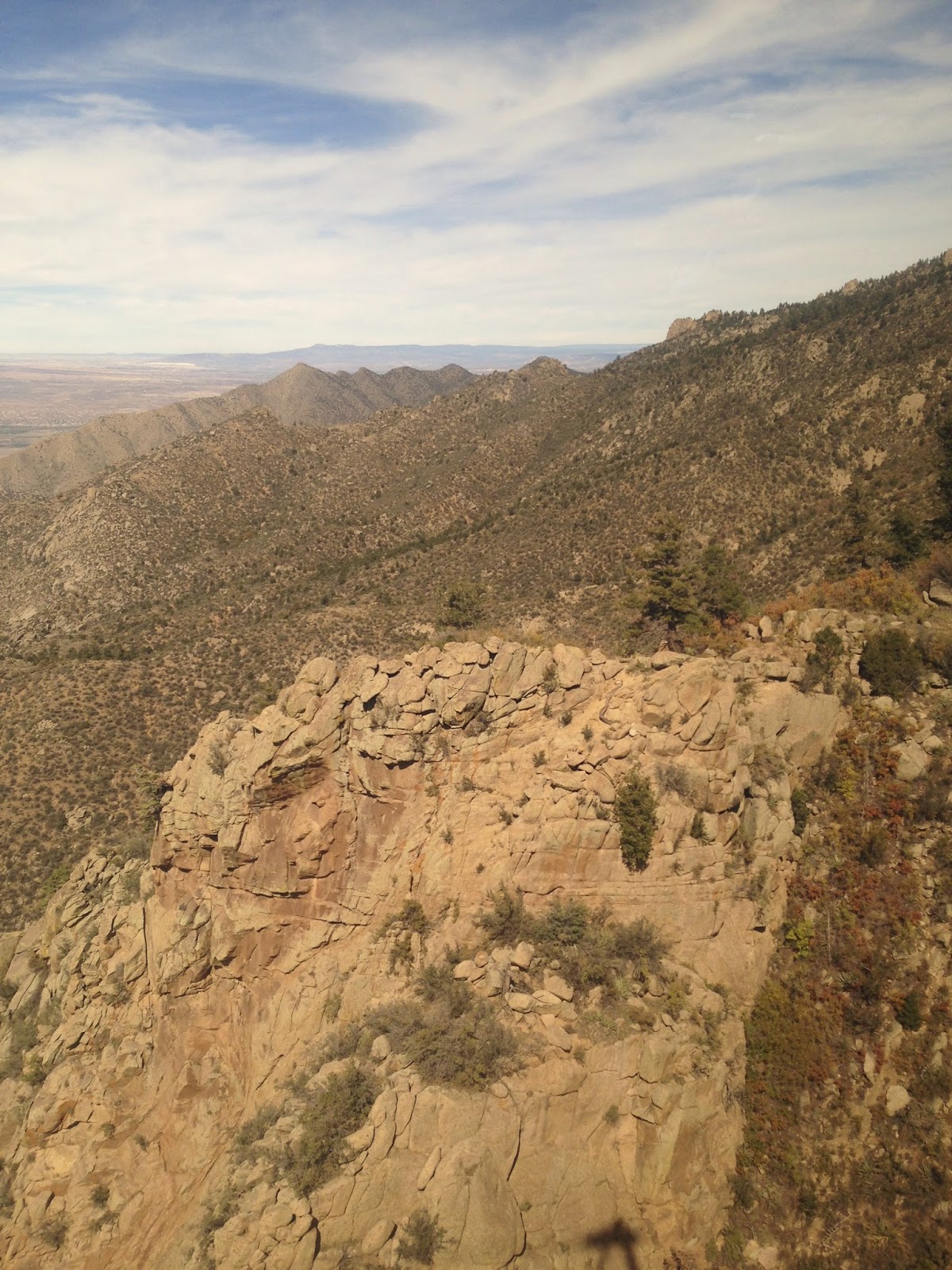 At the base of the mountains, near the tram station, are these adobe style homes.  I told my husband I would love to live here.  What a view these home owners have!  My only fear would be rock slides.  We have that problem here in the bluffs of Buffalo County, and entire homes have been crushed by falling rock. 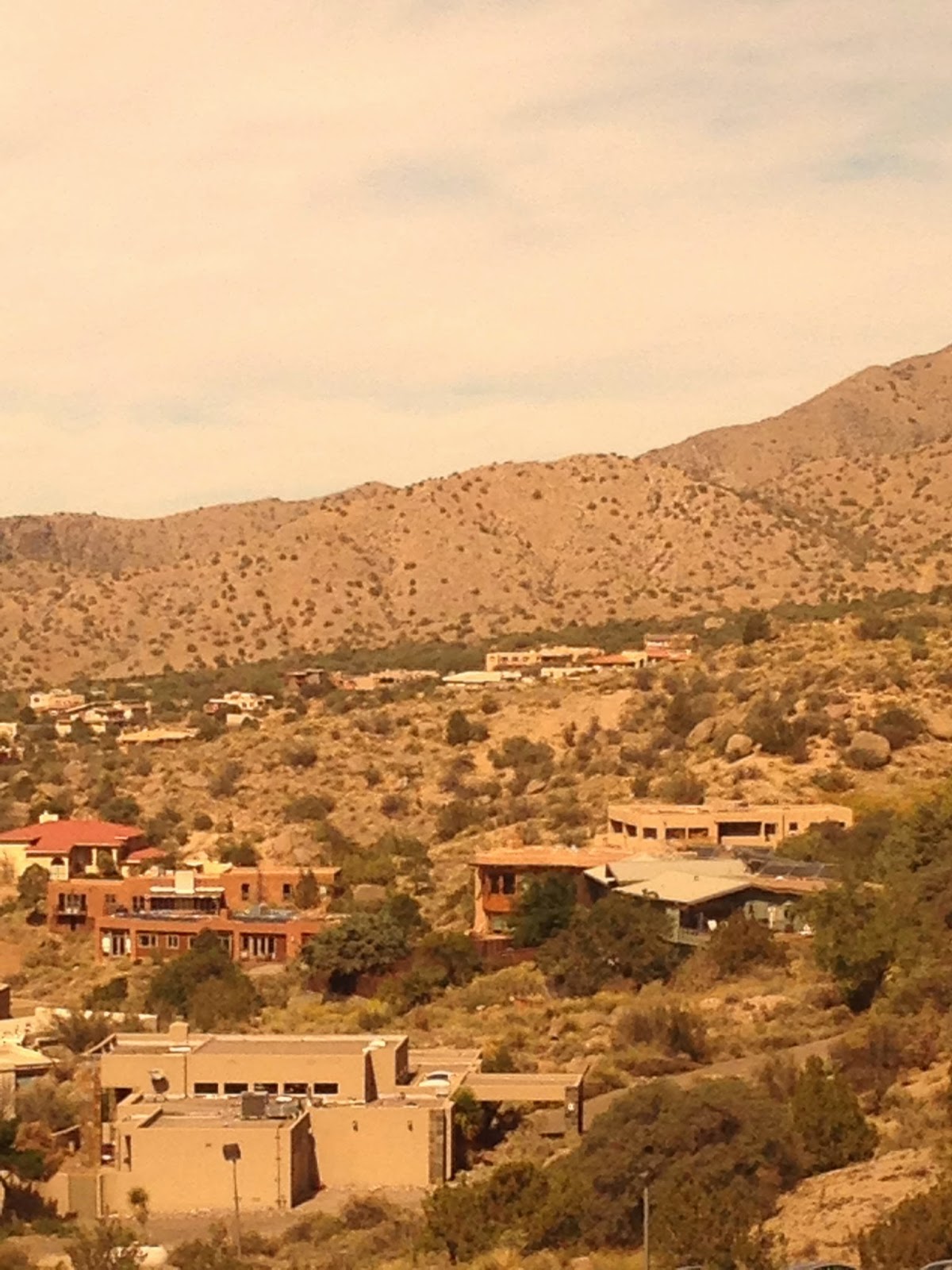 And that concludes the morning of our fifth day of vacation.  Next week's travel post will be about our afternoon visit to the Albuquerque Zoo and a historic restaurant in downtown Albuquerque.