Our Road Trip Out West, Day Four: The Turquoise Trail

Hello!  Today I have Day Four of Our Road Trip Out West to share with you.  If you missed my first two posts of our fall vacation, you can see them HERE and HERE.  After a fun day exploring the city of Santa Fe, it was time to head to Albuquerque:  our ultimate destination of this adventure.  However, being the explorers that we are, we didn't want to do it the easy way and just get on the main highway, so we decided to take The Turquoise Trail.   This is a National Scenic Byway that connects Santa Fe to Albuquerque.  It is 54 miles long and it is named for the rich turquoise deposits found throughout the area.  While driving this beautiful byway, you will see gorgeous mountains, interesting rock formations, and some really quirky towns.  It is an experience not to be missed!

Below is a photo of the typical landscape of the byway. 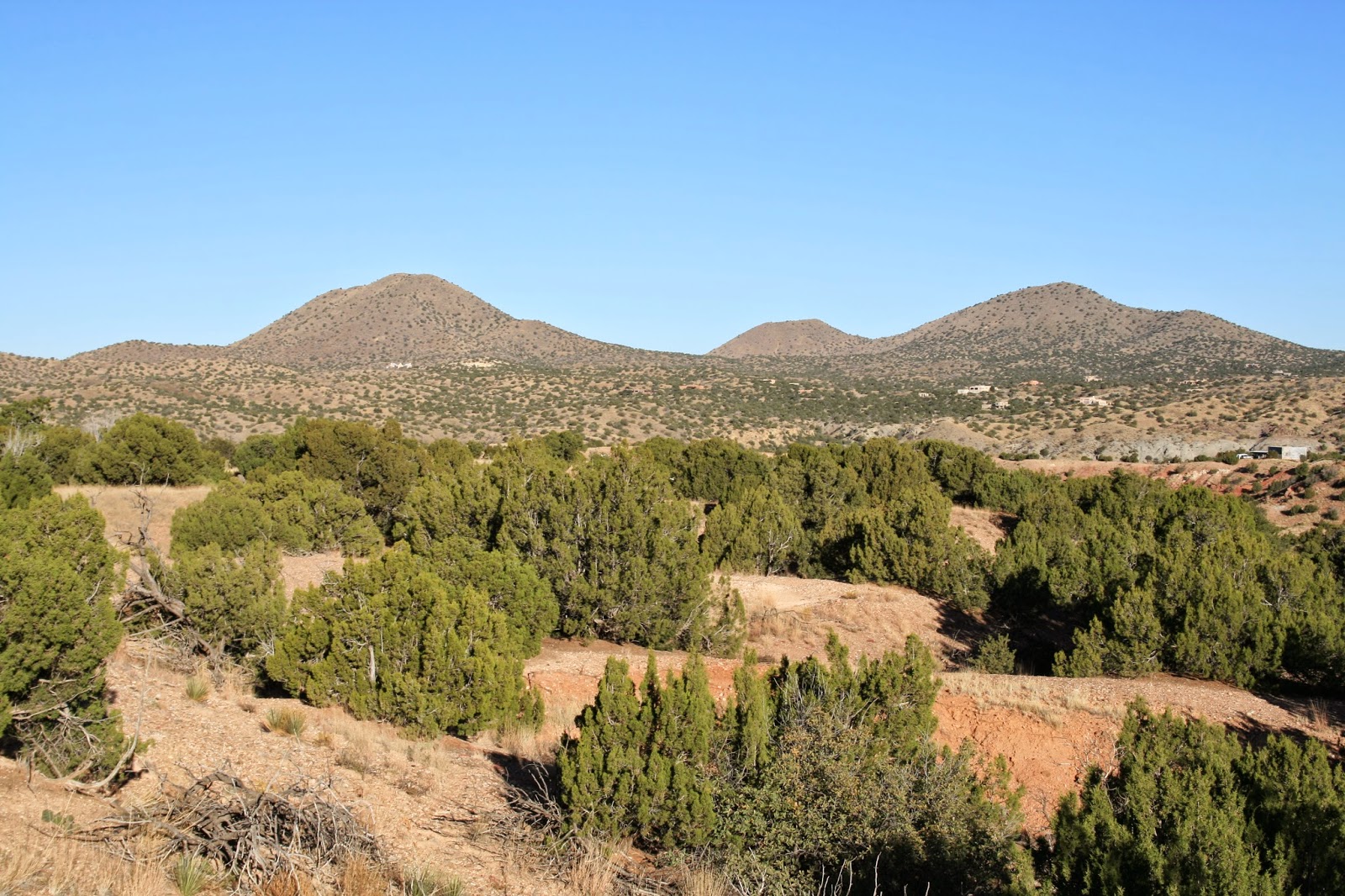 Of course, every few miles we had to stop and take some pictures! 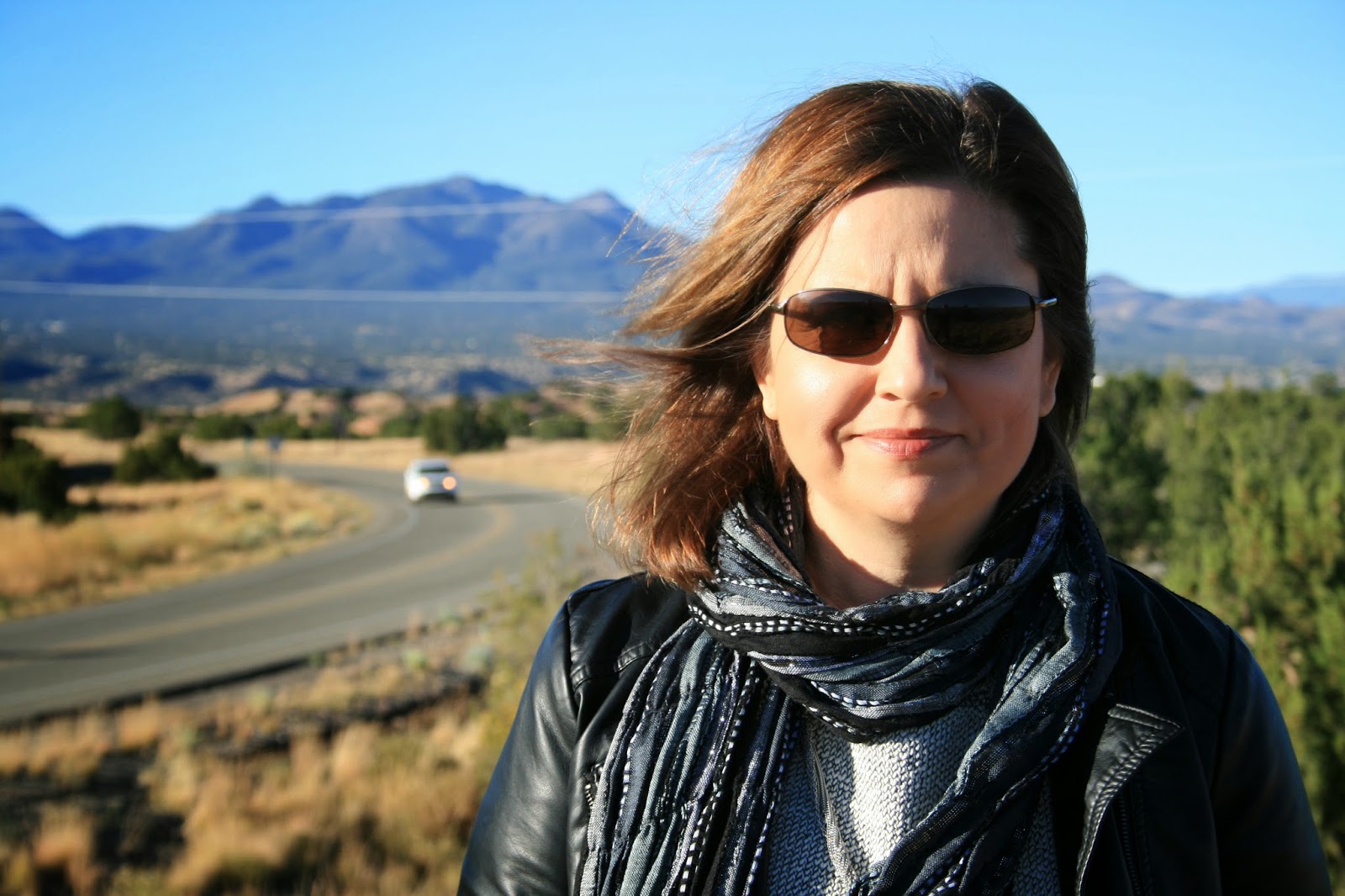 As you see, I'm all dressed out in my biker gear of a vegan leather black moto jacket, scarf, and sunglasses.  This trail is a favorite road for Harley Davidson's lovers to drive on, so I had to look the part!

Even my handsome hubby has his black leather jacket on for the occasion. 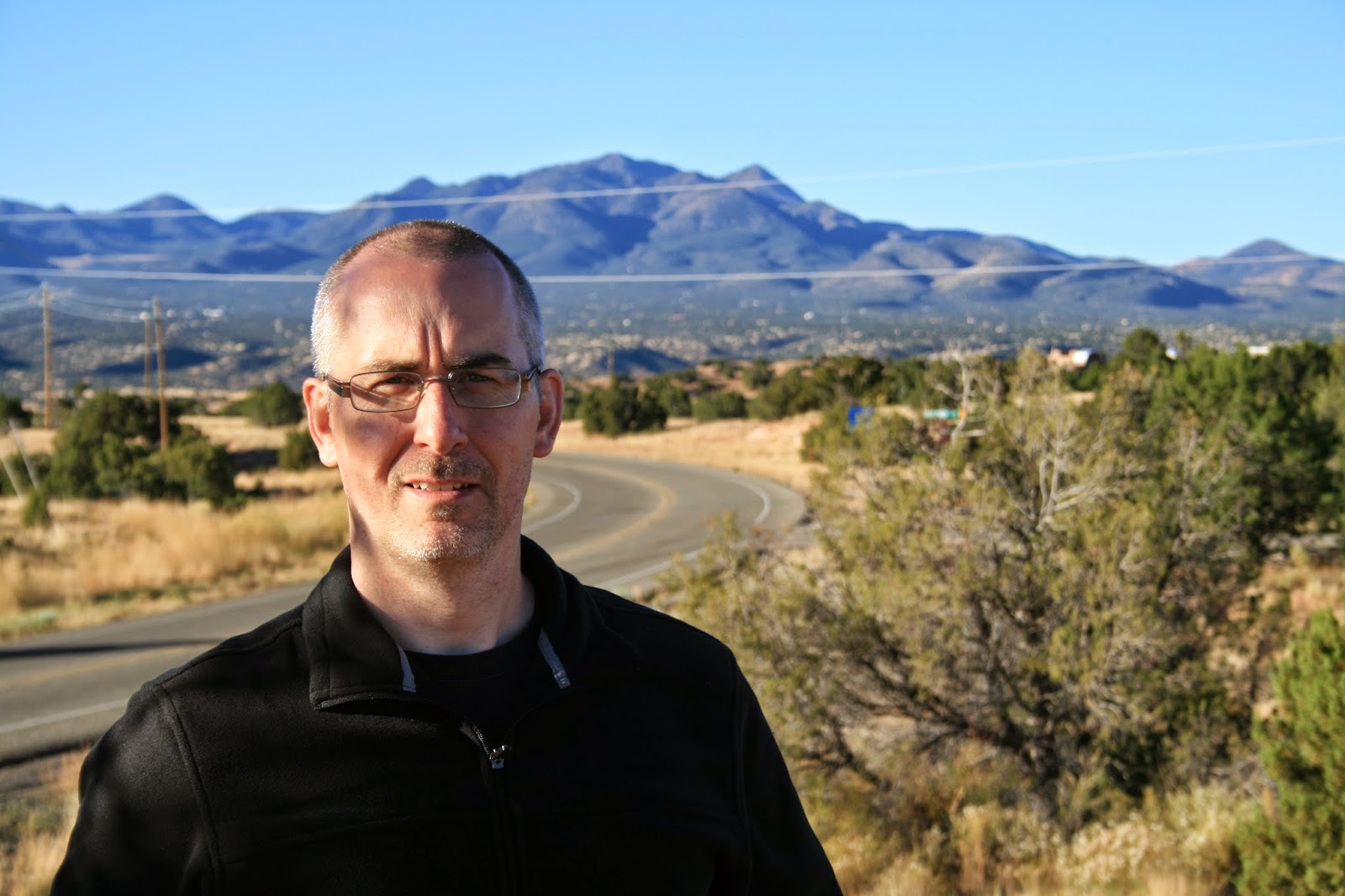 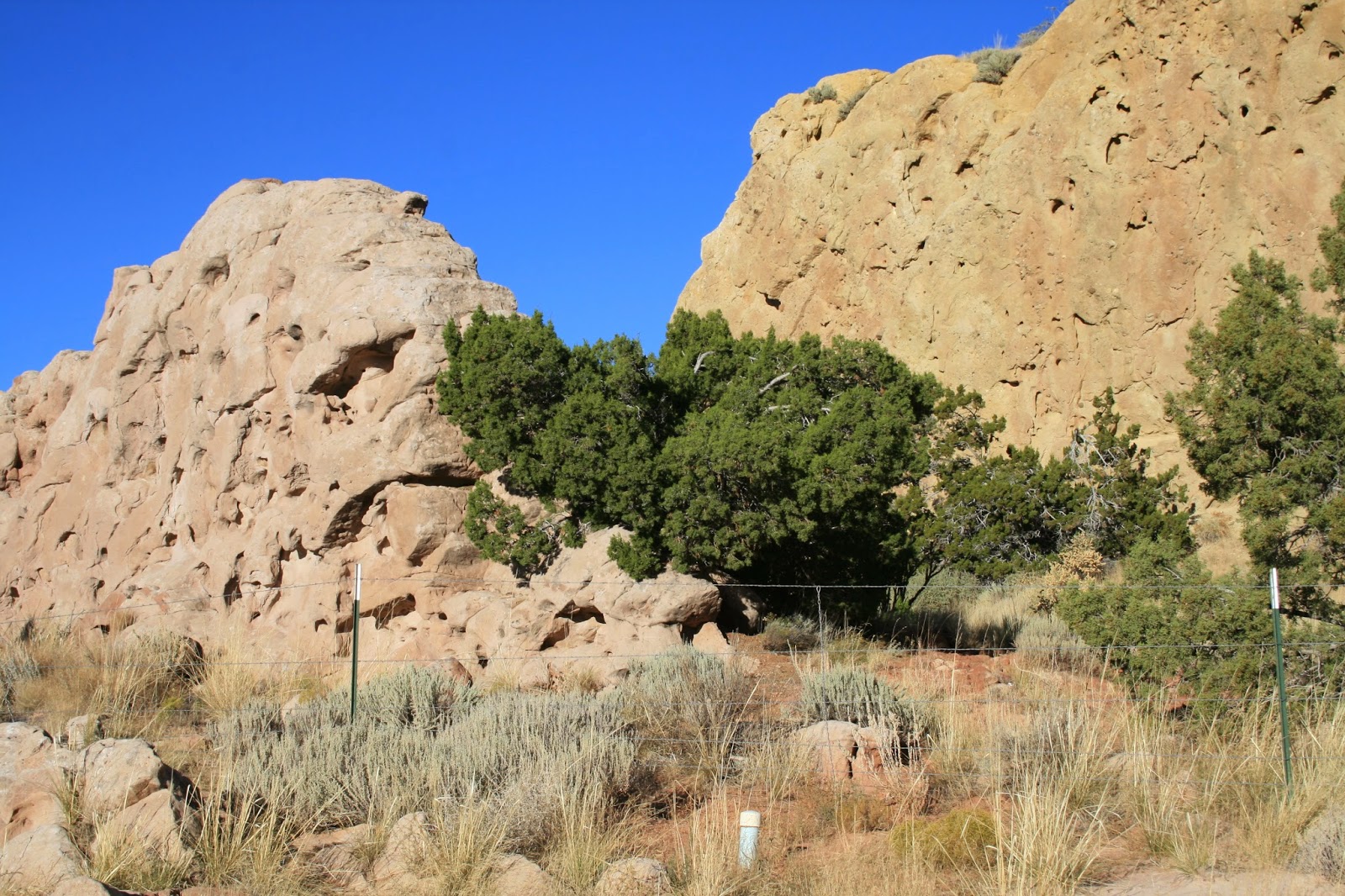 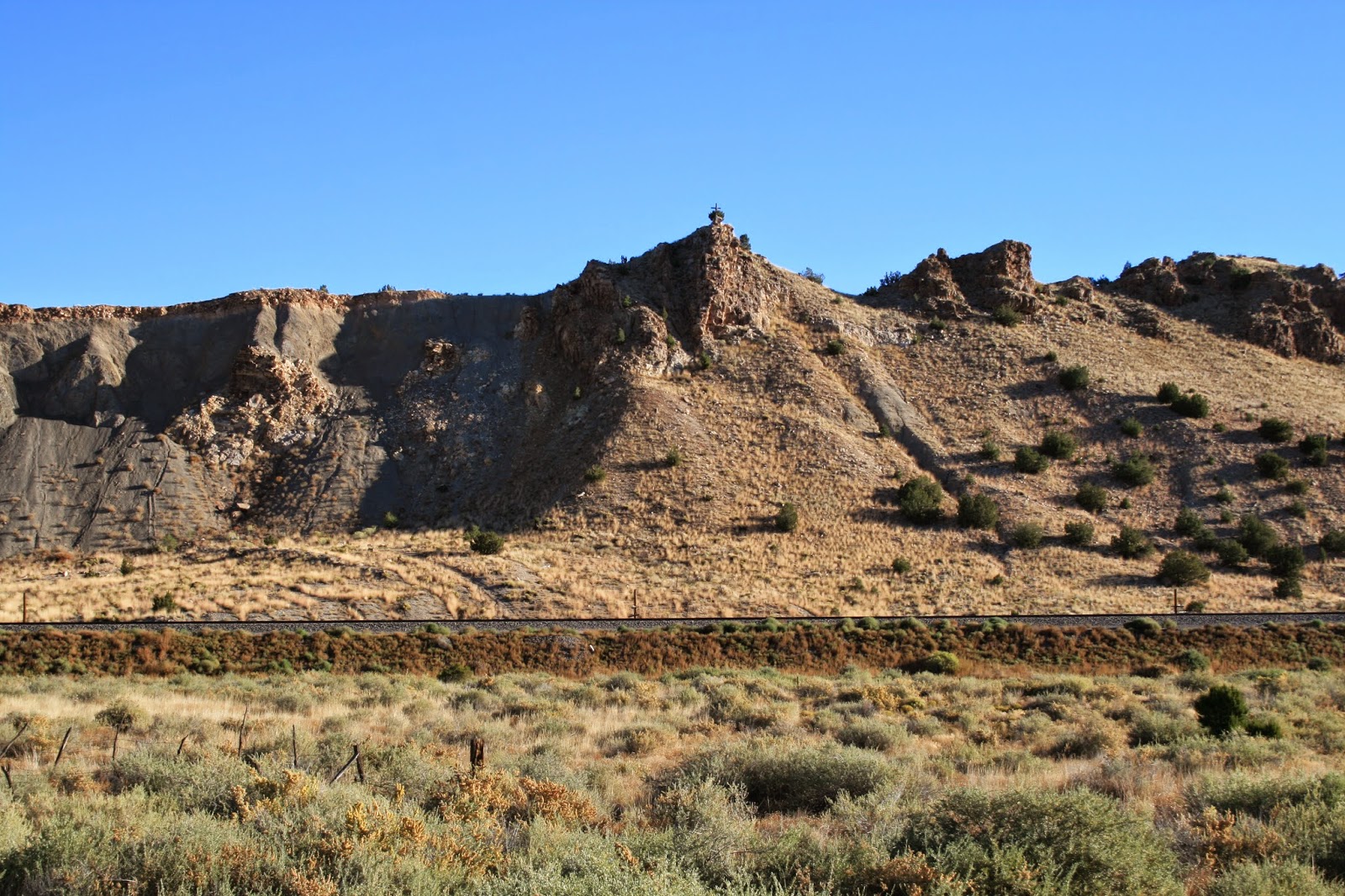 After driving just a few short miles, you will first hit the tiny town of Cerrillos.  This town looked completely abandoned when we were there on our early fall morning visit.  We weren't sure if it was a ghost town, or if the businesses were just closed for the season.  There were a few 'For Sale' signs, and everything else just appeared abandoned.  But it was really interesting to see this town.  It was so quiet, it was eerie.  It had a main street with some very interesting old structures, and a beautiful church. 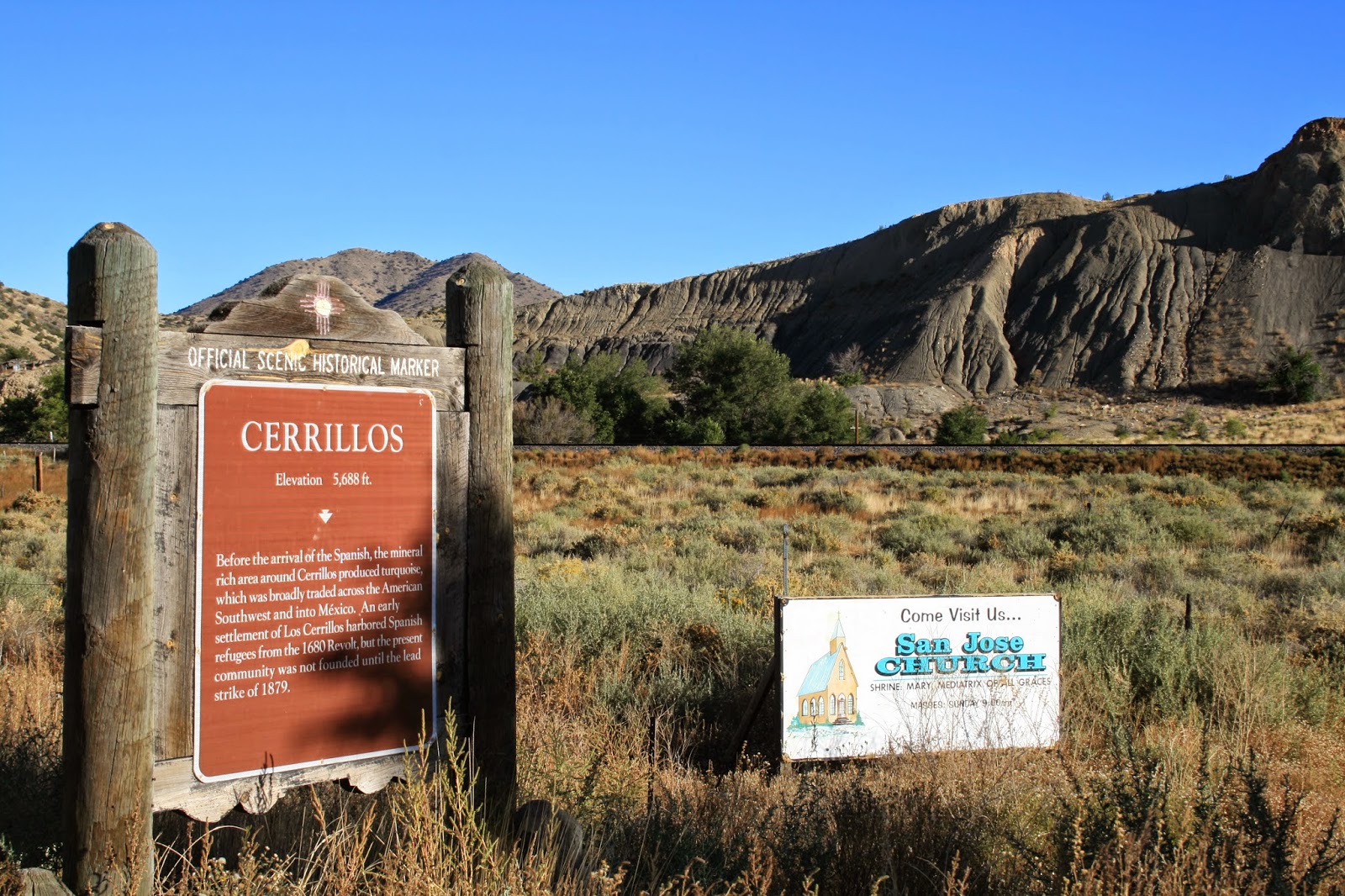 Here are some of the empty, old buildings.  The town originated as a tent camp for miners.  It eventually blossomed into a community with 21 saloons, 5 brothels, 4 hotels, and several newspapers during the mineral boom.  The sleepy, old town has since served as a movie set for dozens of movies, the most notable ones being "Young Guns" and "Young Guns II". 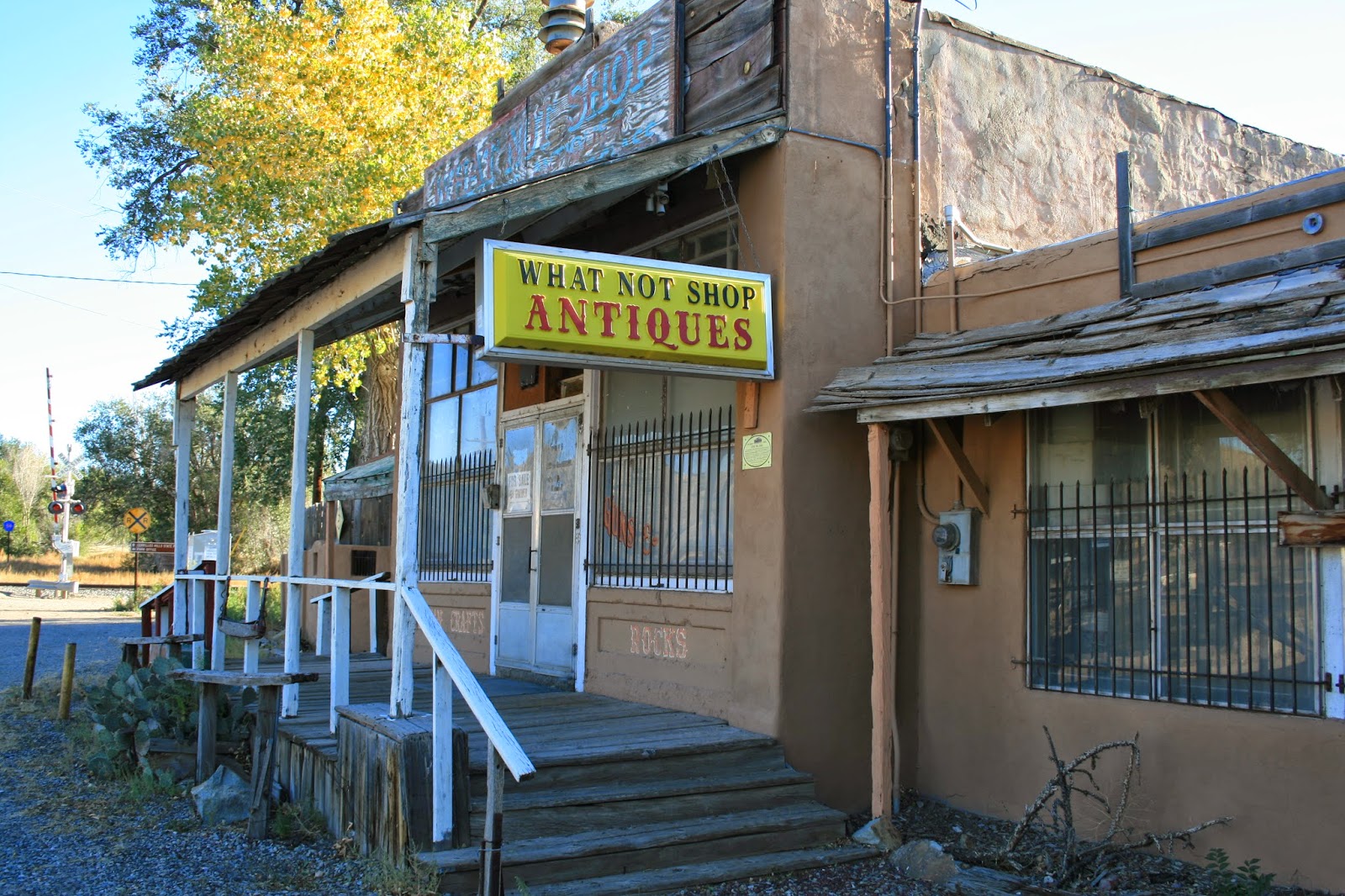 Don't you just love this bar?  Could it be more simple that? 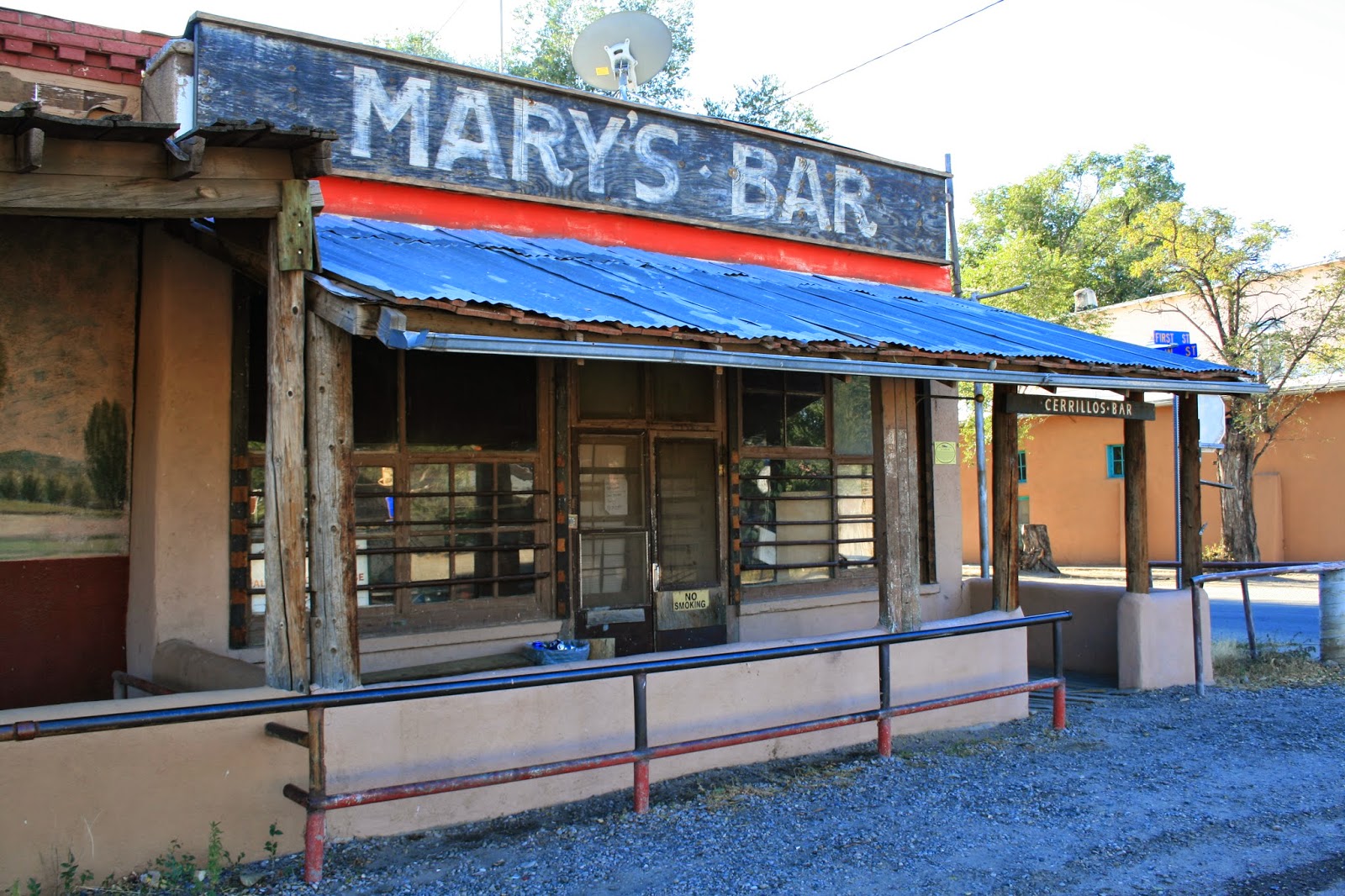 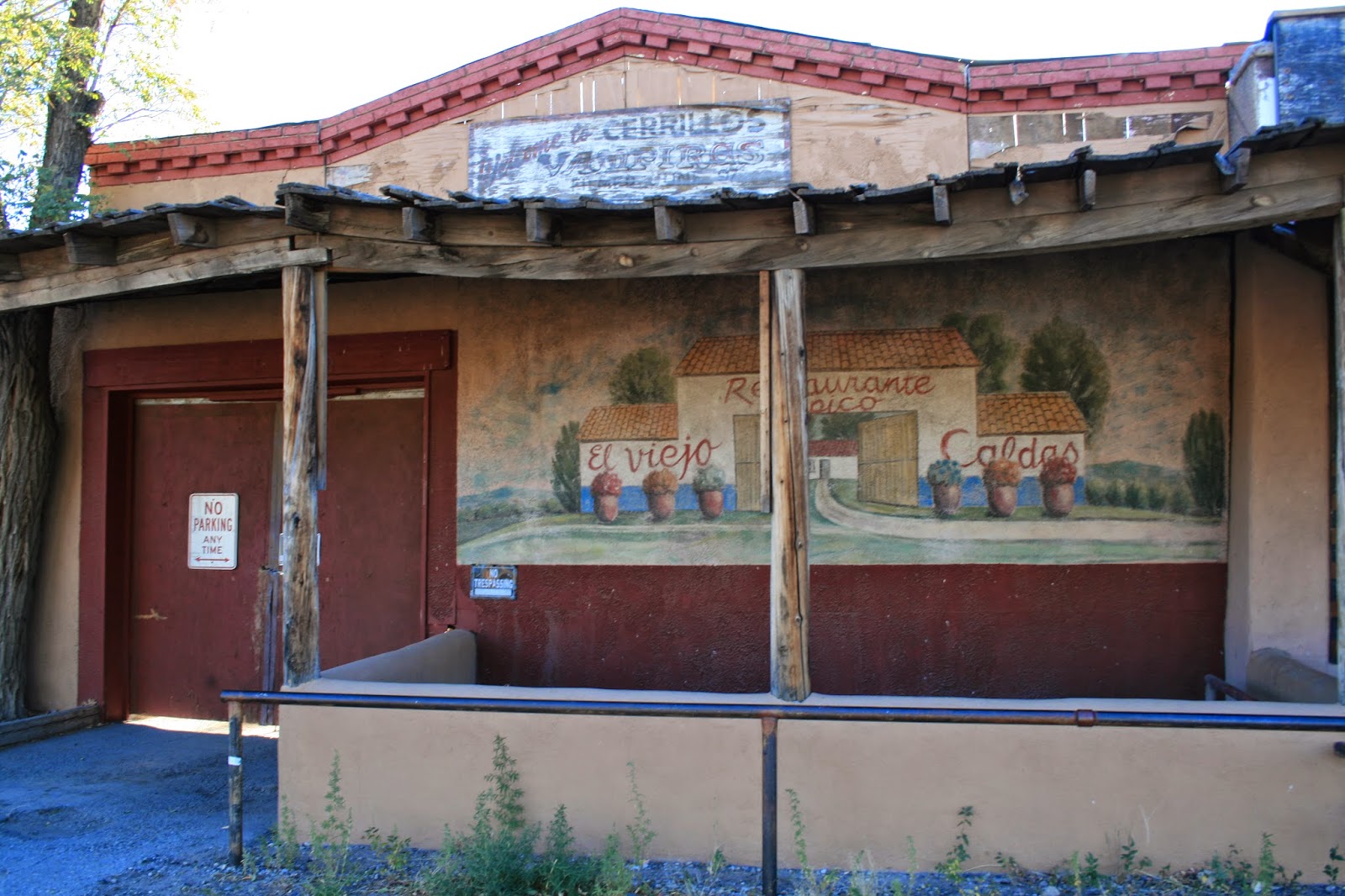 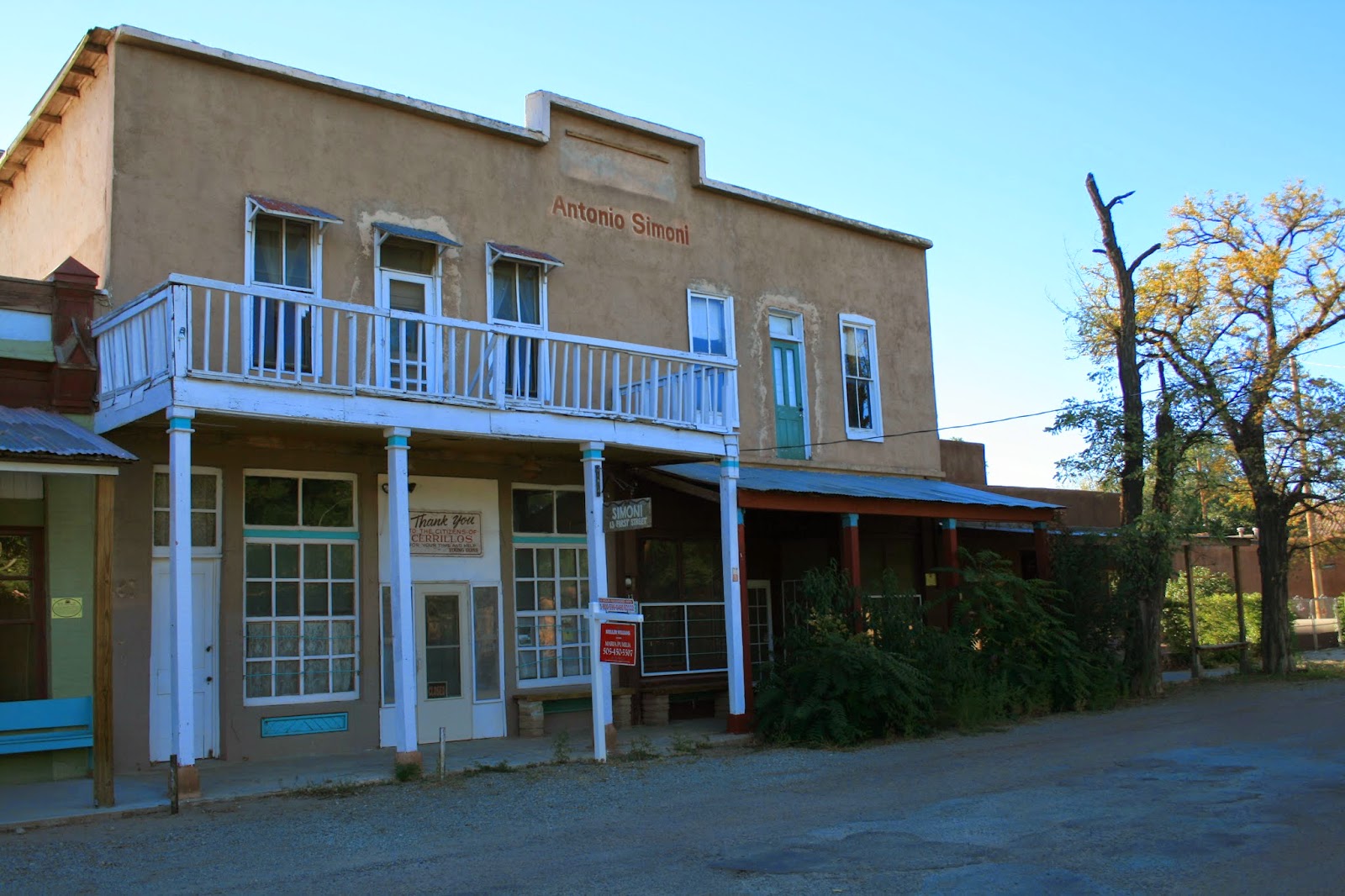 The name of this historic church is St. Joseph.  Although it appeared to be a functioning church, there was no one around when we were there, so we were unable to go inside. 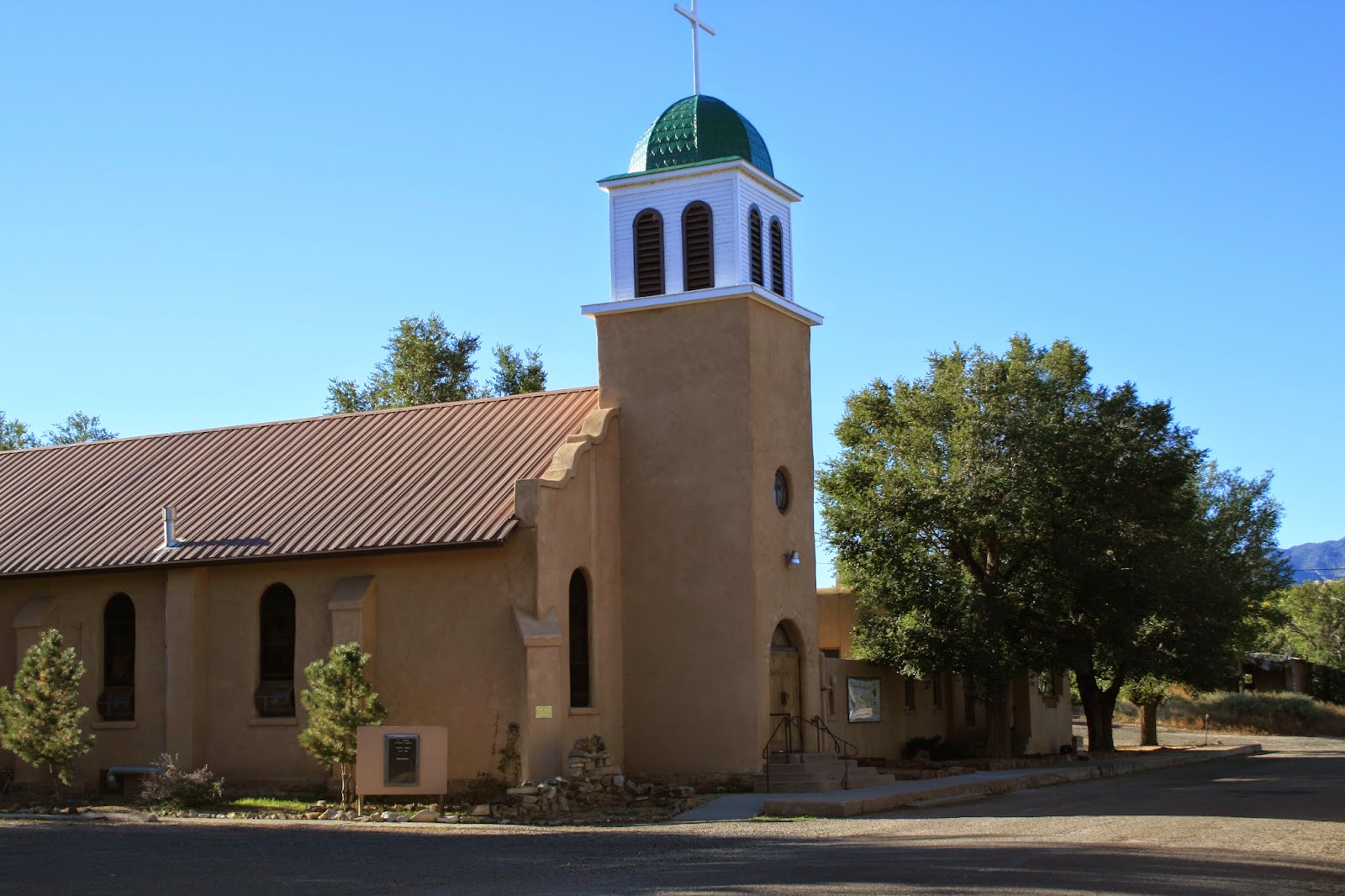 My husband stayed in the car while I walked up the dirt paved streets and took pictures.  It was so quiet, it was almost frightening.  I heard a rustling noise in the brush on the side of the road, and nearly jumped out of my skin!  Was it a rattle snake?  I looked to investigate, but all I could find was this cactus.  It was the first cactus I had seen on my trip out west, so I had to snap a picture.  We later found out from an Albuquerque native that cactus really doesn't grow in this part of New Mexico because it gets too cold.  This cactus, I actually had in my yard in my Northern Wisconsin home when I first bought my house.  I hated it because of the thorns, so I dug it up and threw it away.  It is one of the few cactus plants that can survive cold winters. 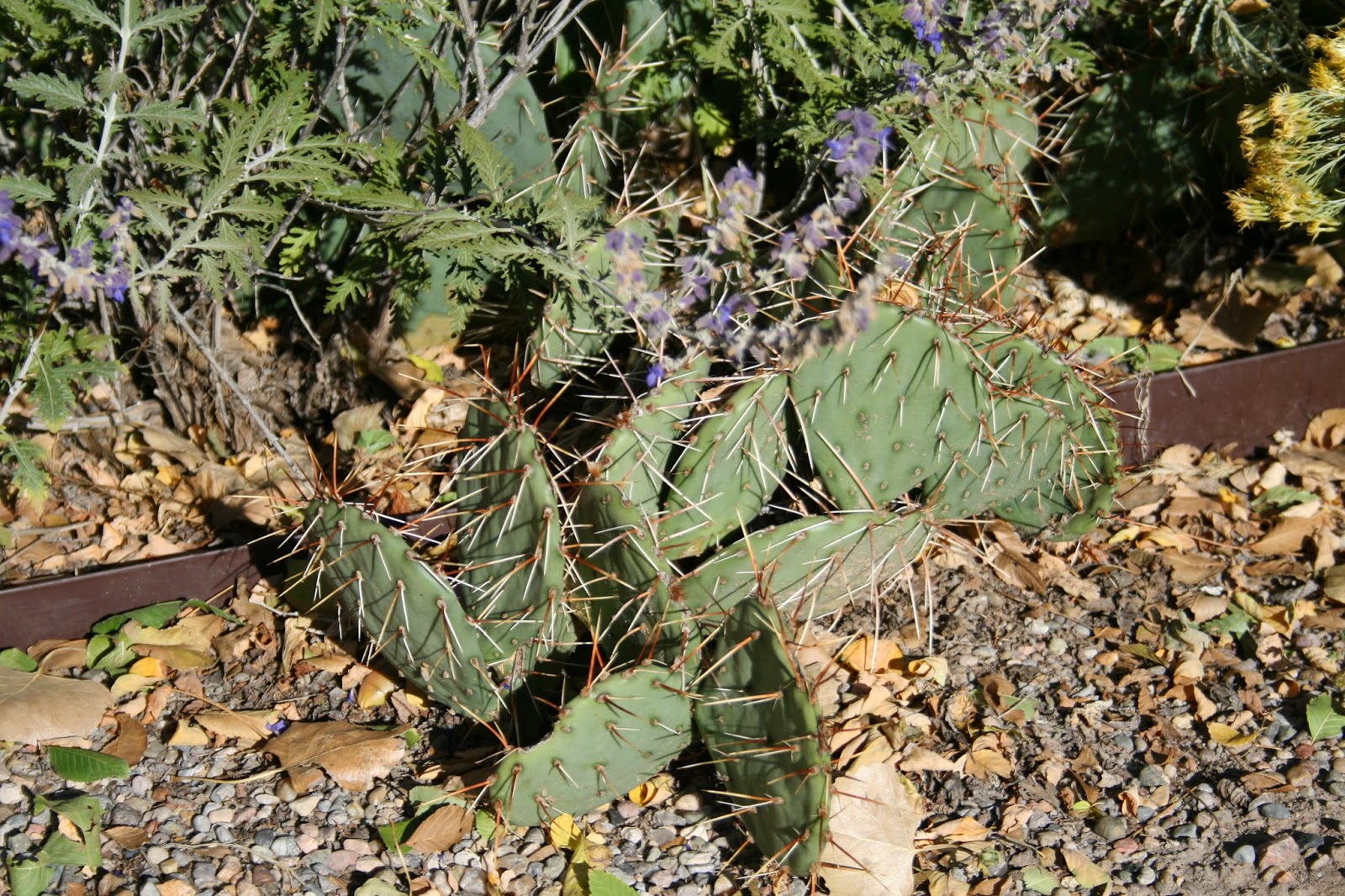 The name of this town is Madrid, and it is actually a recovered ghost town of about 150 villagers who turned the abandoned buildings into cafes, galleries, and shops.   It is a gorgeous little town nestled in the mountains (see the mountain in the distance, at the end of the road?) filled with colorful, quirky, little homes and businesses. 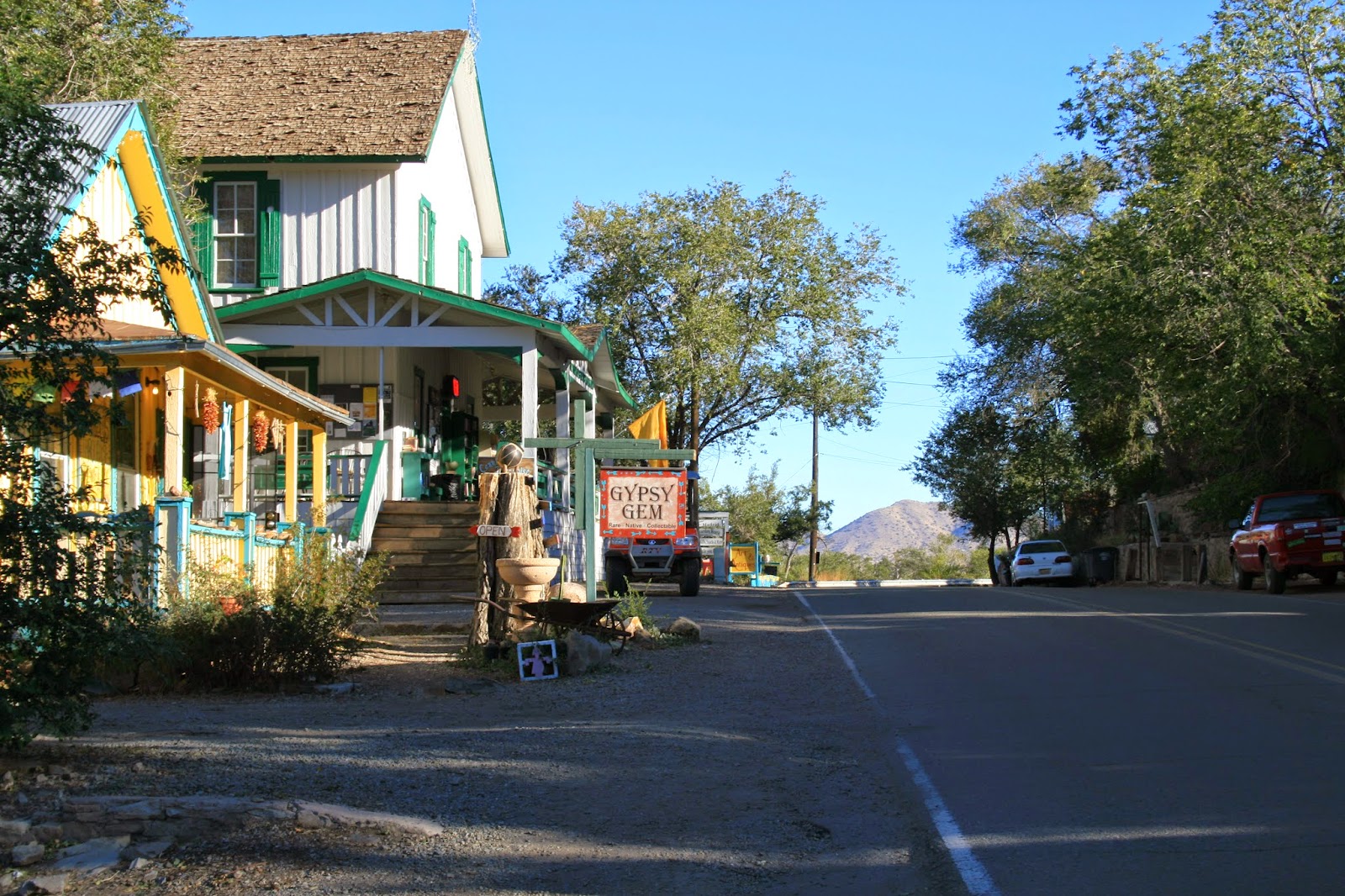 The movie 'Wild Hogs' was filmed almost entirely in New Mexico, and the sleepy, little town of Madrid was used for many of the scenes in the movie.  This old boarding house,  which is used as a general store today, was a backdrop in many of the movie scenes. 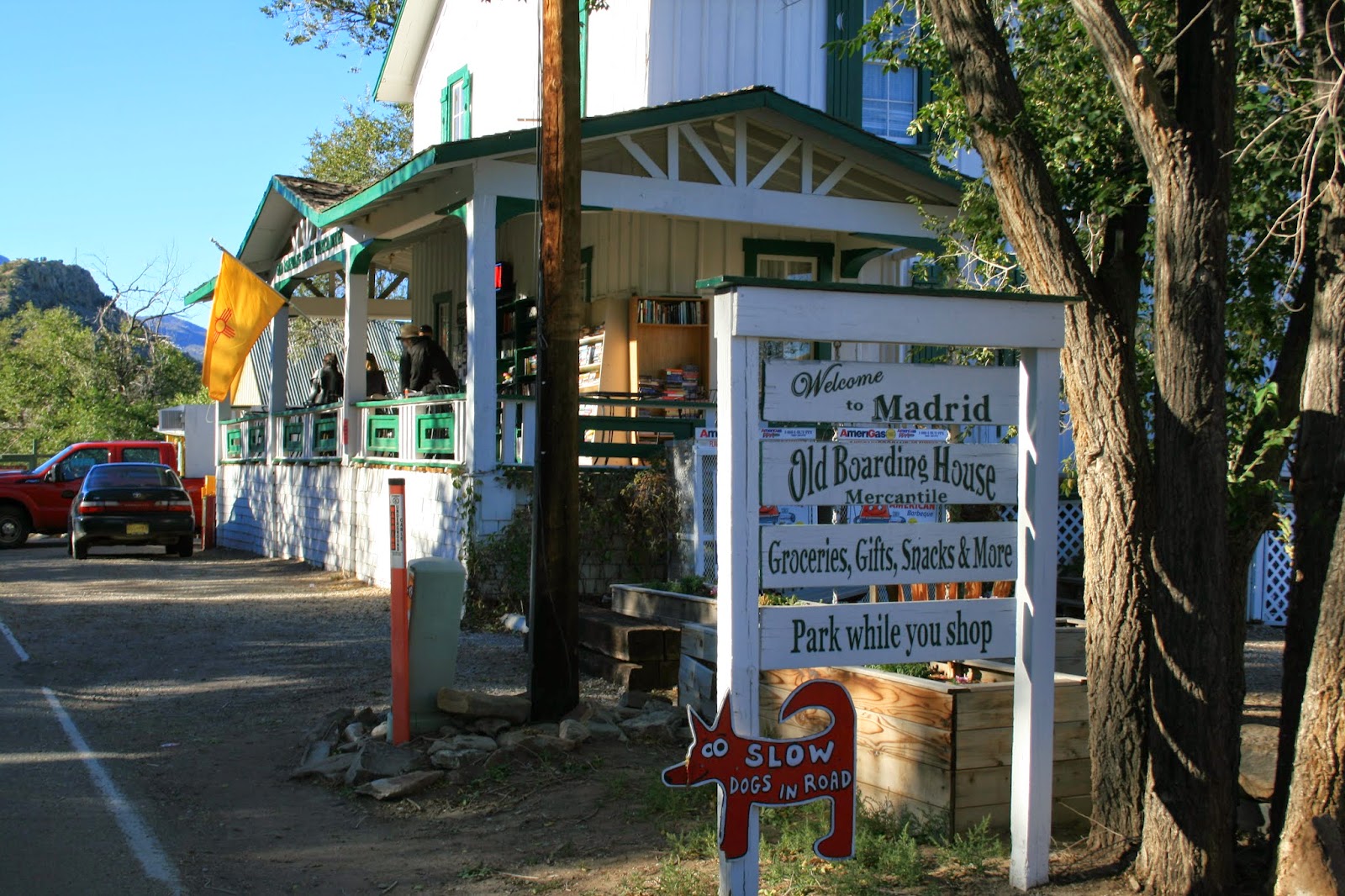 This diner, is not original to the town, but was actually a set constructed for the movie, and later left to the town by the film company.  The main character "Maggie", played by Marisa Tomei, operated the diner that the Wild Hogs visited and many of the movie scenes were filmed inside this structure.  The building now serves as a gift/souvenir shop selling Wild Hog and Biker merchandise.  There is a sign on the porch that reads 'This is Not a Restaurant',  probably because tourists see the 'Diner' sign and think they can get something to eat here!

I have to say that as a business woman myself, I was surprised that the owners did not capitalize more on the history of this building.  If I ran this business today, I would have created a little museum of sorts showing personal photos of the Wild Hogs movie being filmed here, along with interesting stories. I could just see pictures of John Travolta and Tim Allen all over the walls of the shop along with little captions and fun facts.  Instead, all they had was merchandise cluttered all over the place.  I actually had no idea of the history of this building until I got home and started researching the facts for my blog post. 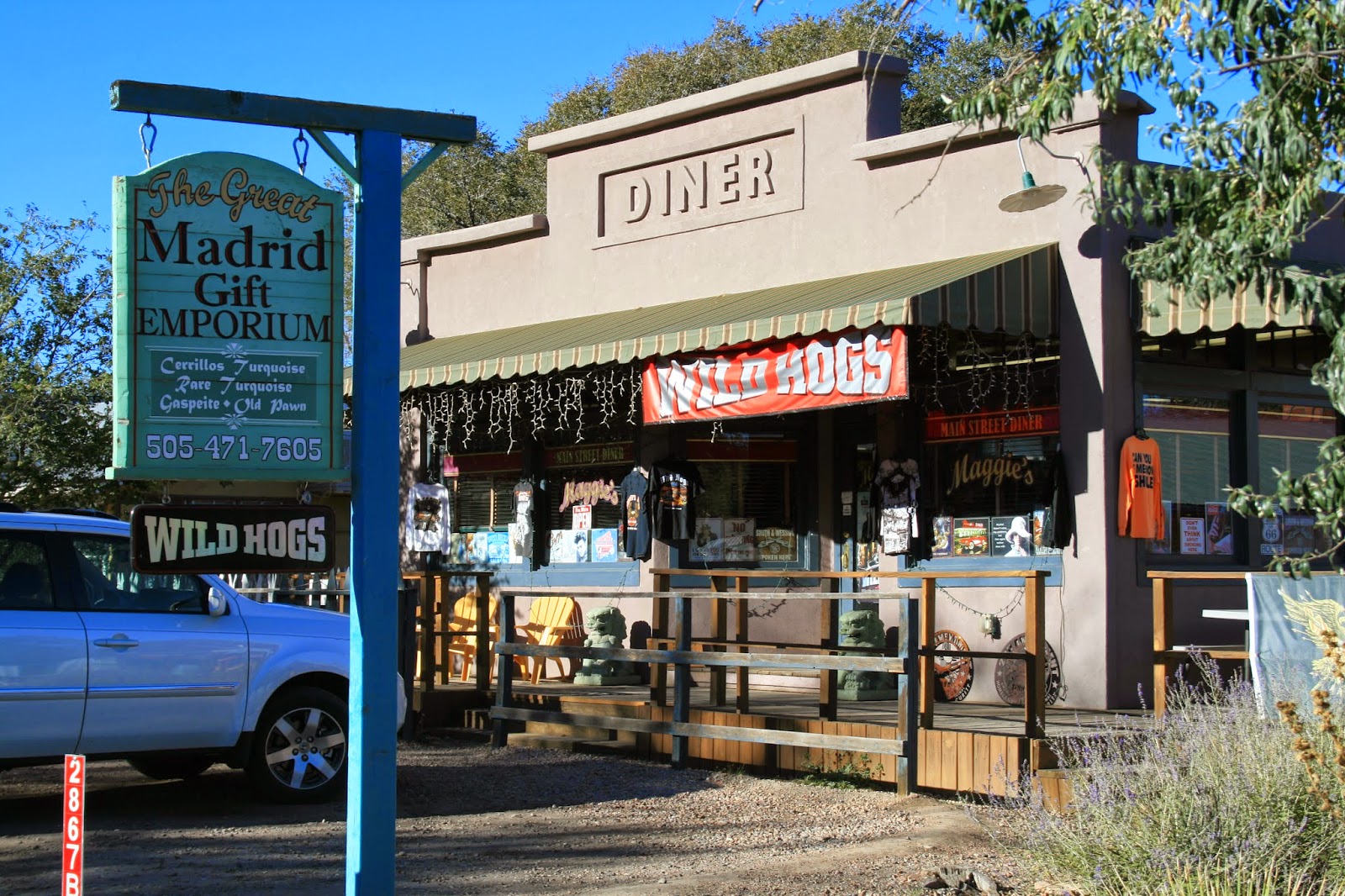 They kept the original diner counter and eating booths, and just filled them with merchandise. 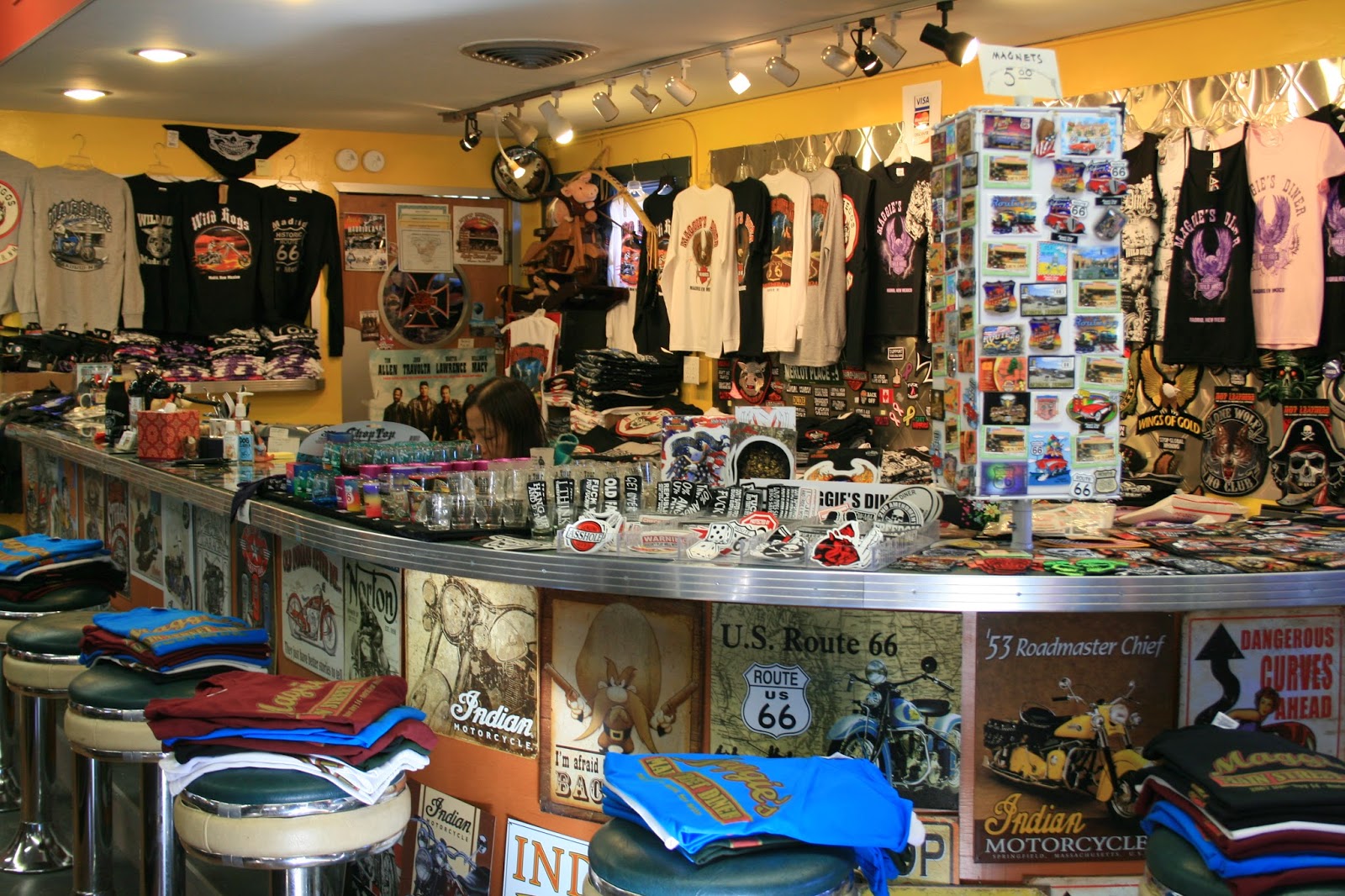 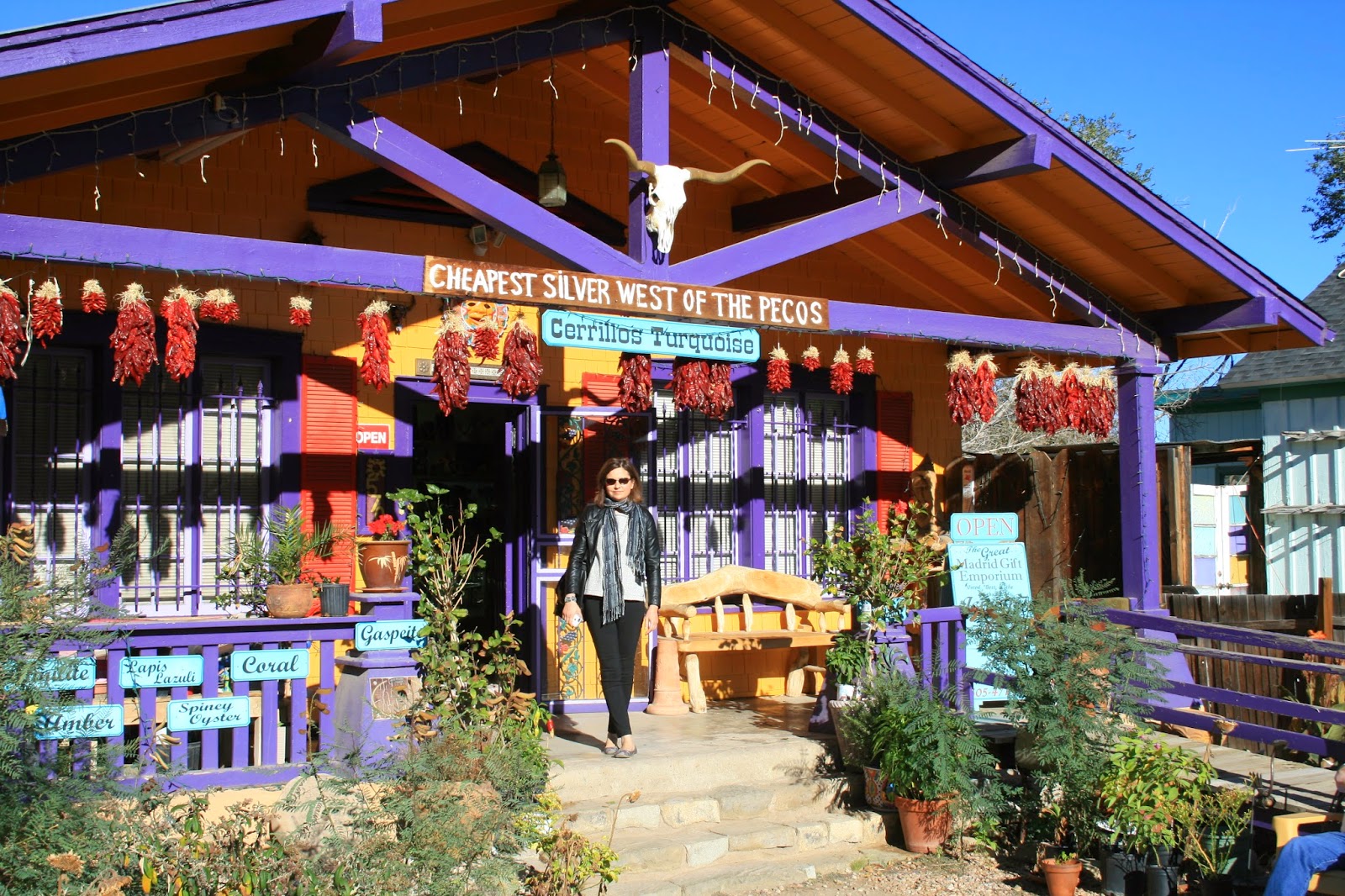 In the picture above I'm standing outside a colorful jewelry store that sells handmade turquoise jewelry. I just loved all the animal skulls and the hanging chili peppers I saw all over New Mexico.

According to a local resident this house is the most photographed home in Madrid.  I thought it was abandoned, but someone does live here.  I was told that the current resident was a history buff and didn't believe in home renovations.  Being the gullible person that I am, I believed the man until my husband told me later that he was joking. 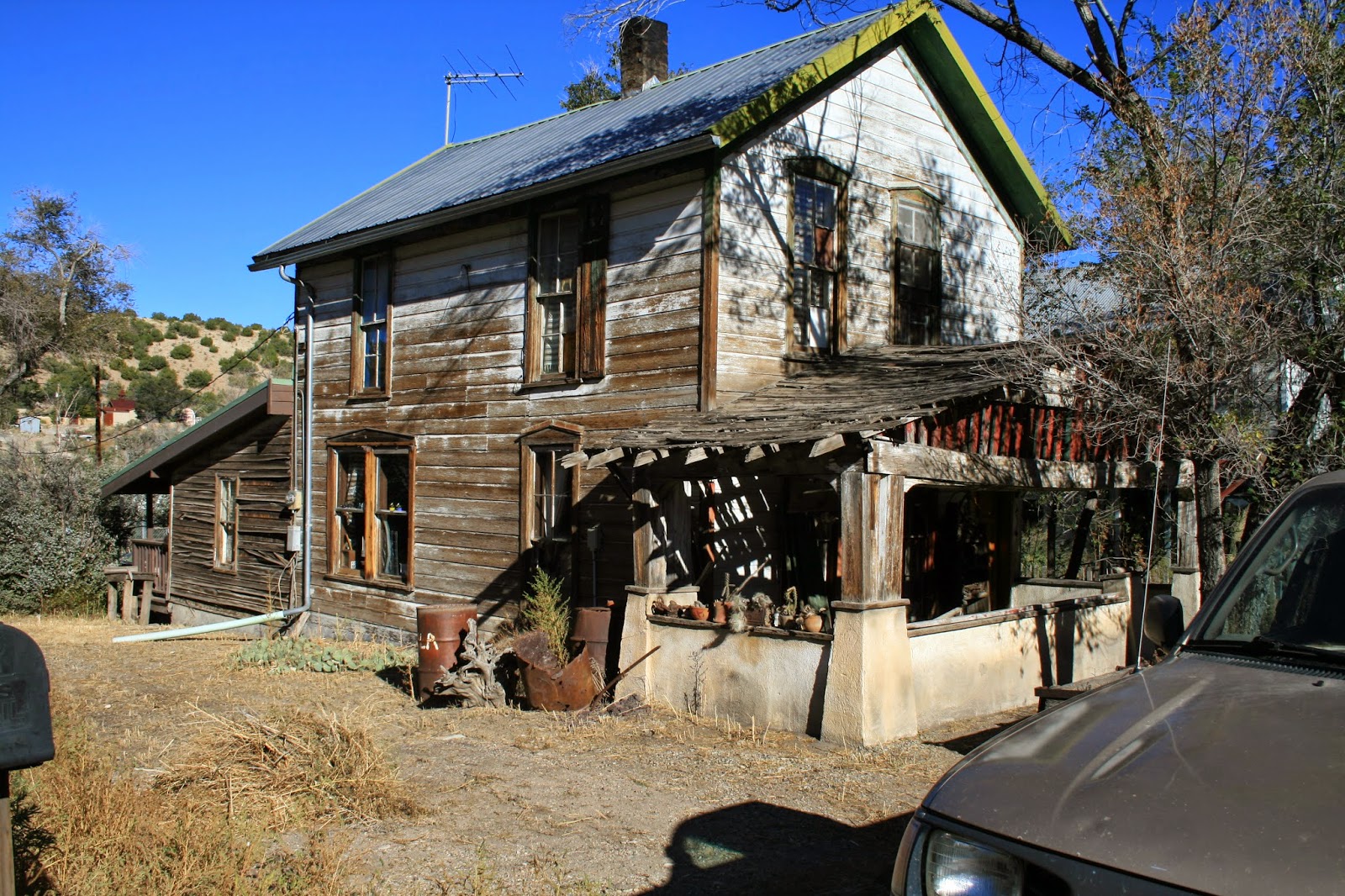 This charming building is a coffee house called 'Java Junction'.  This was my favorite stop in town.  It serves delicious lattes, espressos, and pastries, along with a little boutique of women's apparel, and home made hot sauces.  I ordered my favorite:  a vanilla latte and it was the best latte I ever had.  Of course, I did have to go without my usual morning coffee because the hotel coffee maker was broken and there wasn't any coffee at breakfast;  so by 9:00 a.m., any coffee might have been the best coffee I ever had! 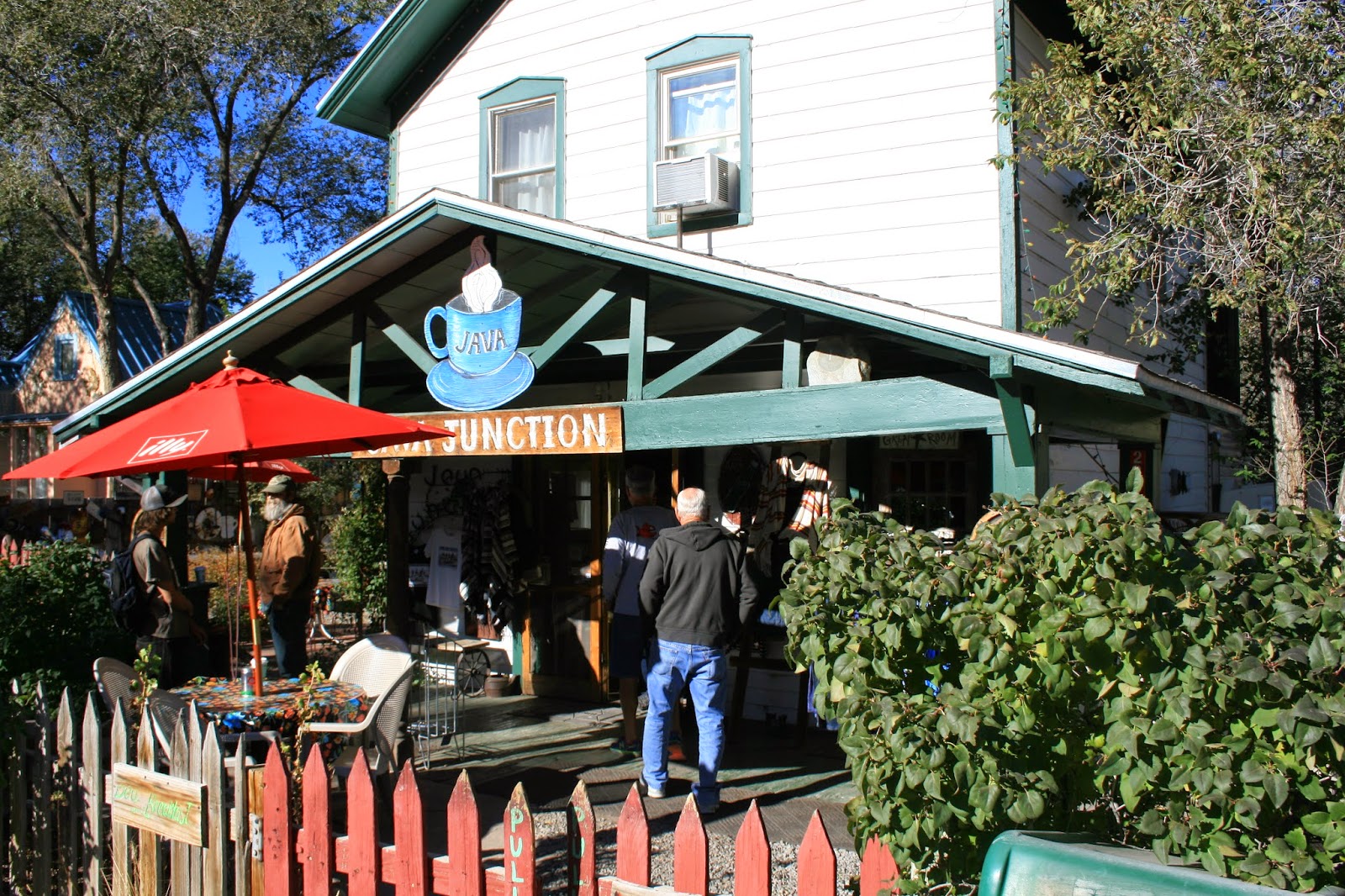 Ah, coffee, coffee, coffee!  What a relief it was to finally have that glorious hot beverage in my hand.  Now I'm happy.  A beautiful sunny day, a quaint little town, a glorious mountain view, and a cup of hot coffee….what more could you ask for? 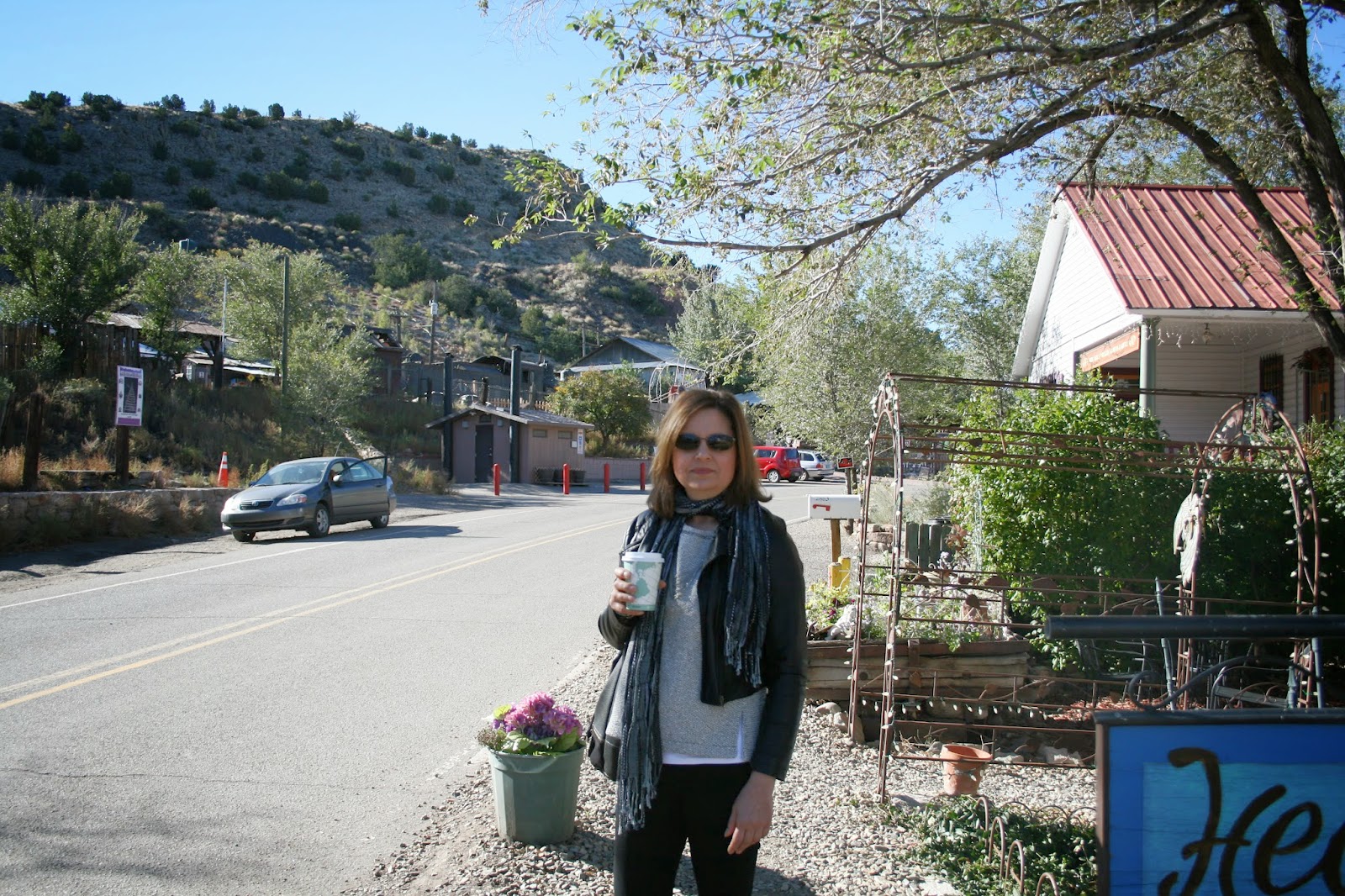 The Mine Shaft Tavern is a historical landmark in Madrid.  I read before our trip out west, that they  were the People's Choice Award for the Santa Fe Green Chile Cheeseburger contest, so I really wanted to eat lunch here.  However, as usual it was bad timing and we were there too early to eat lunch, so all I could do was take a picture of the outside.  They proudly claim that they have the longest stand up bar in New Mexico and they have live music on weekends. 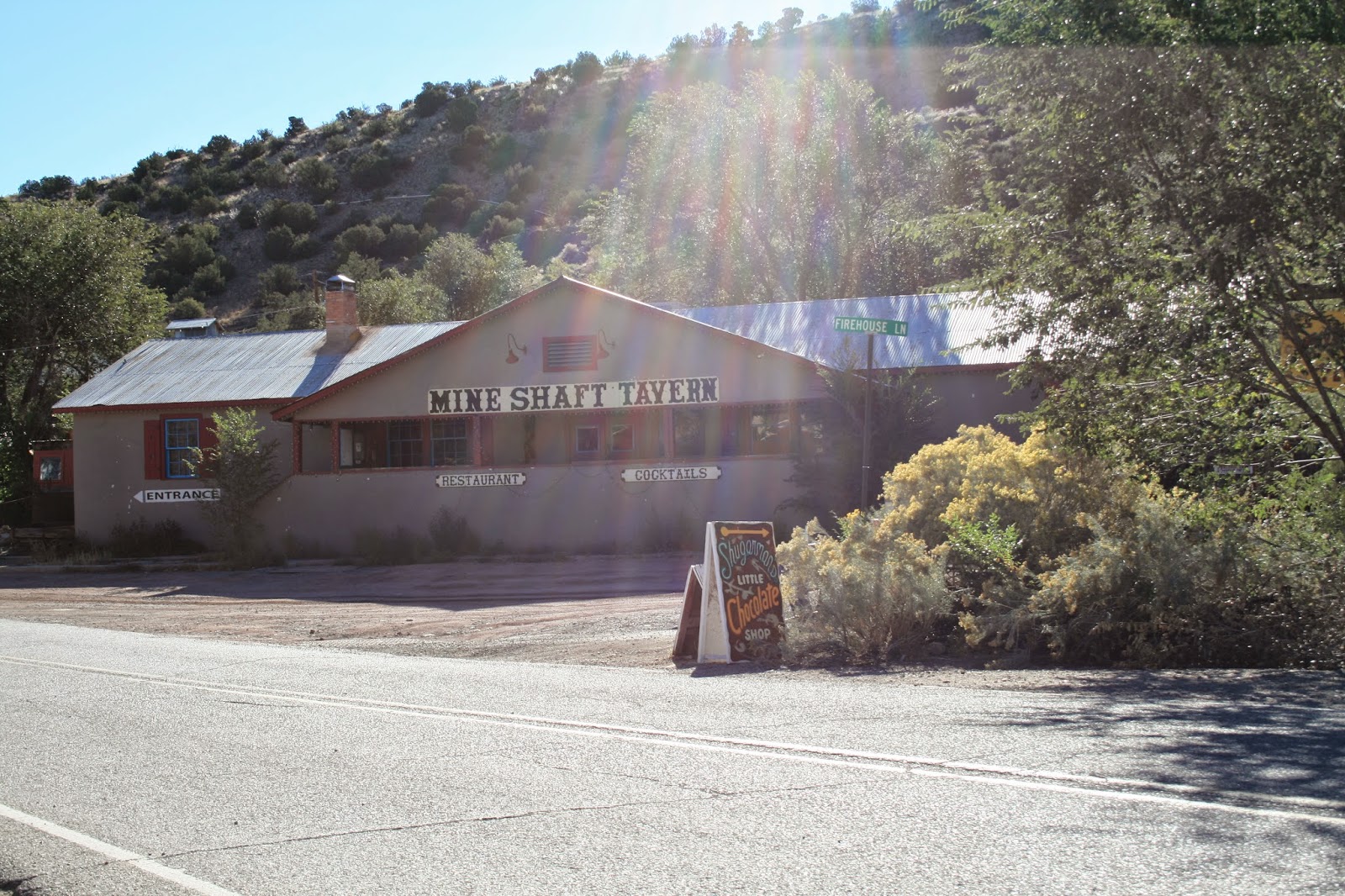 After we left Madrid, there was not much else to see but beautiful landscape.  There was one more ghost town we could have visited called 'Golden', which is nothing but a few crumbling ruins left over from the gold mining area, but it was so minuscule, somehow we missed it and drove right past it.  I was watching for it, but we reached the end of the trail before we knew it. 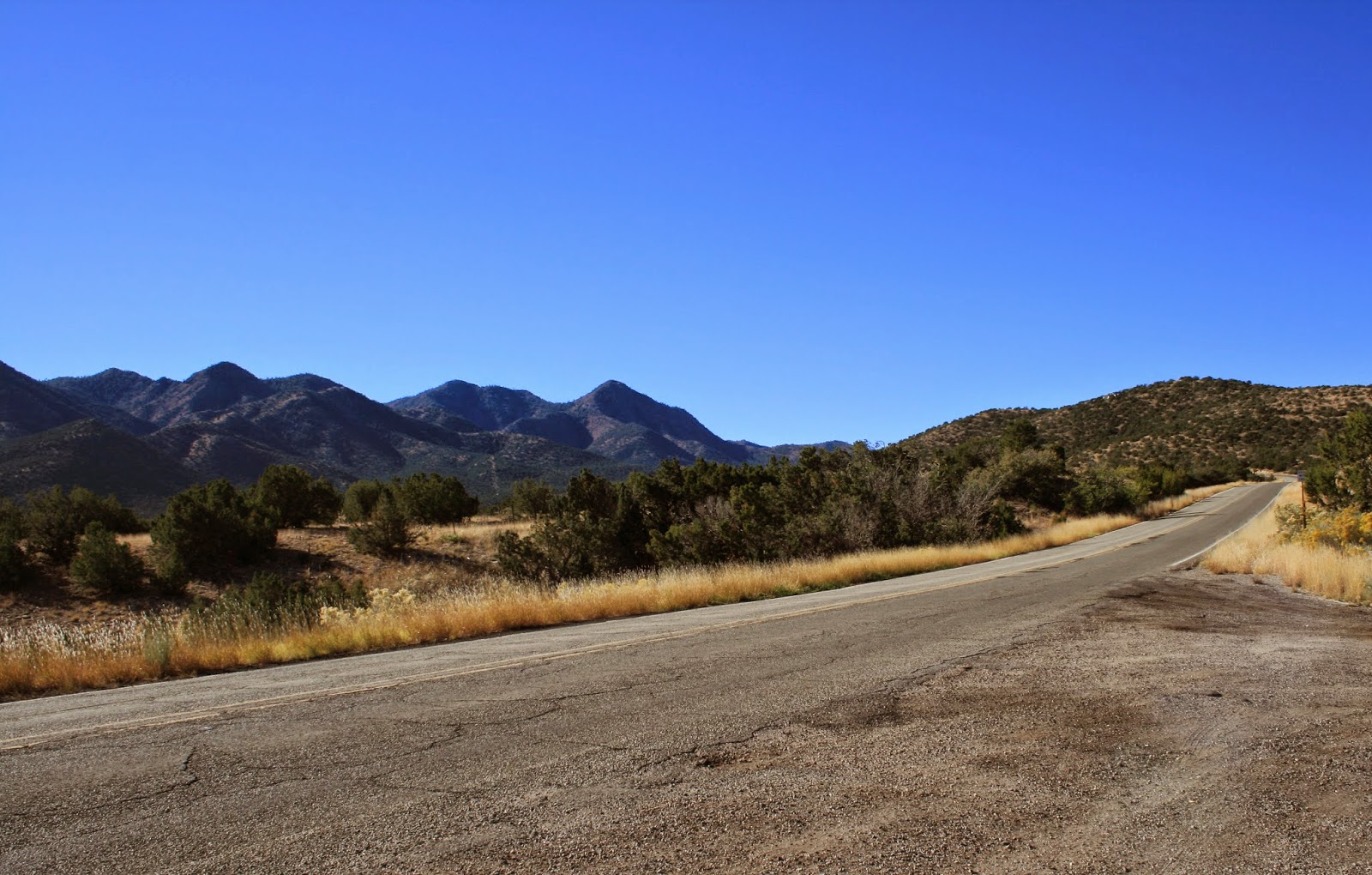 The scenery was gorgeous however, and seemed to grow prettier the closer we got to Albuquerque.  I just love the beautiful amber glow of the grass with the mountain backdrop and pure blue sky.  So serene and picturesque. 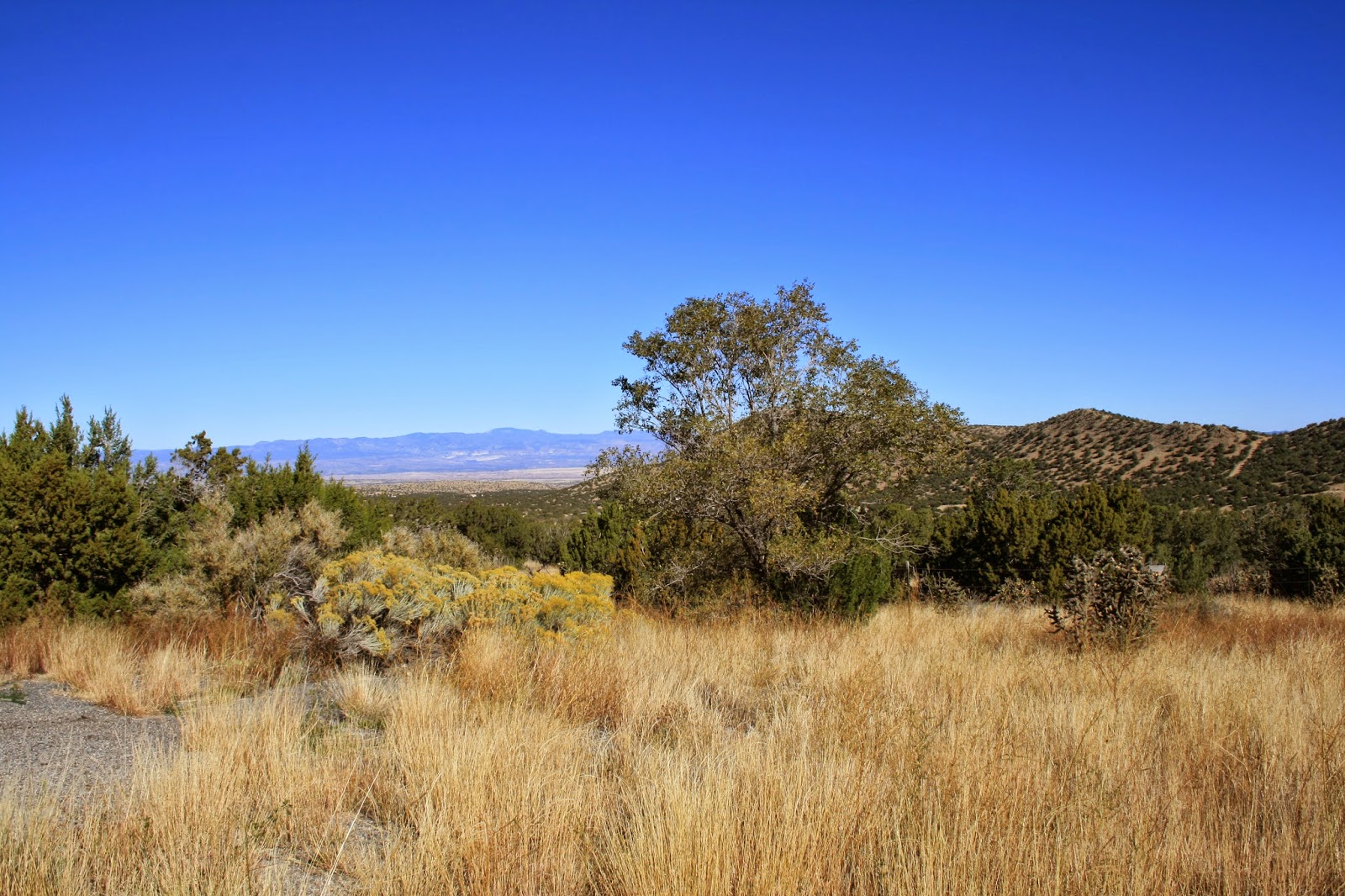 I never tire of mountain views while driving.  Every twist and turn of the road just brought on one more breath-taking sight. 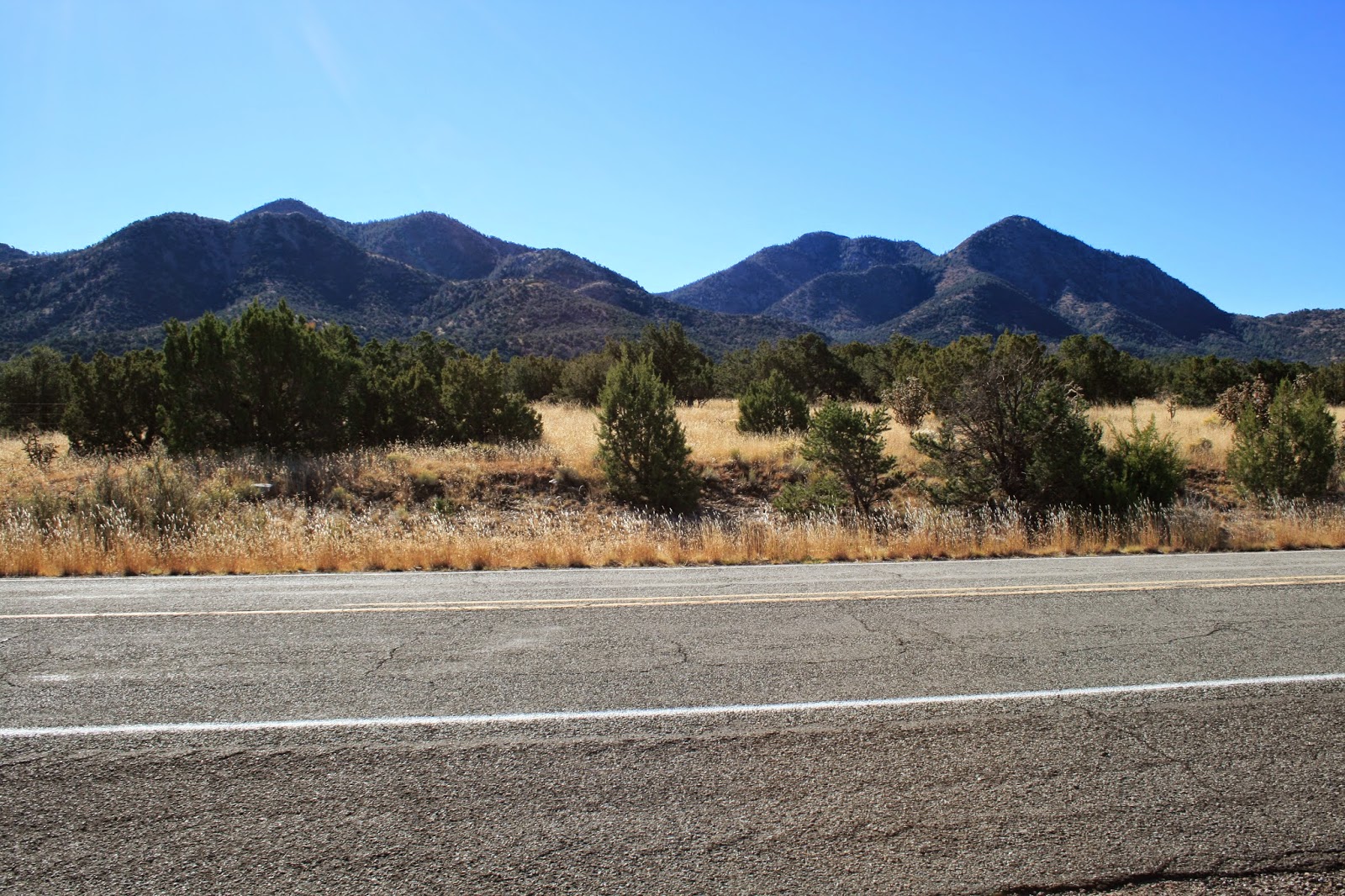 I found the way juniper grew amongst all the rocky hills in New Mexico so interesting.  The soil seems so rocky and dry, how could plant life like this grow and thrive here?  But it does. 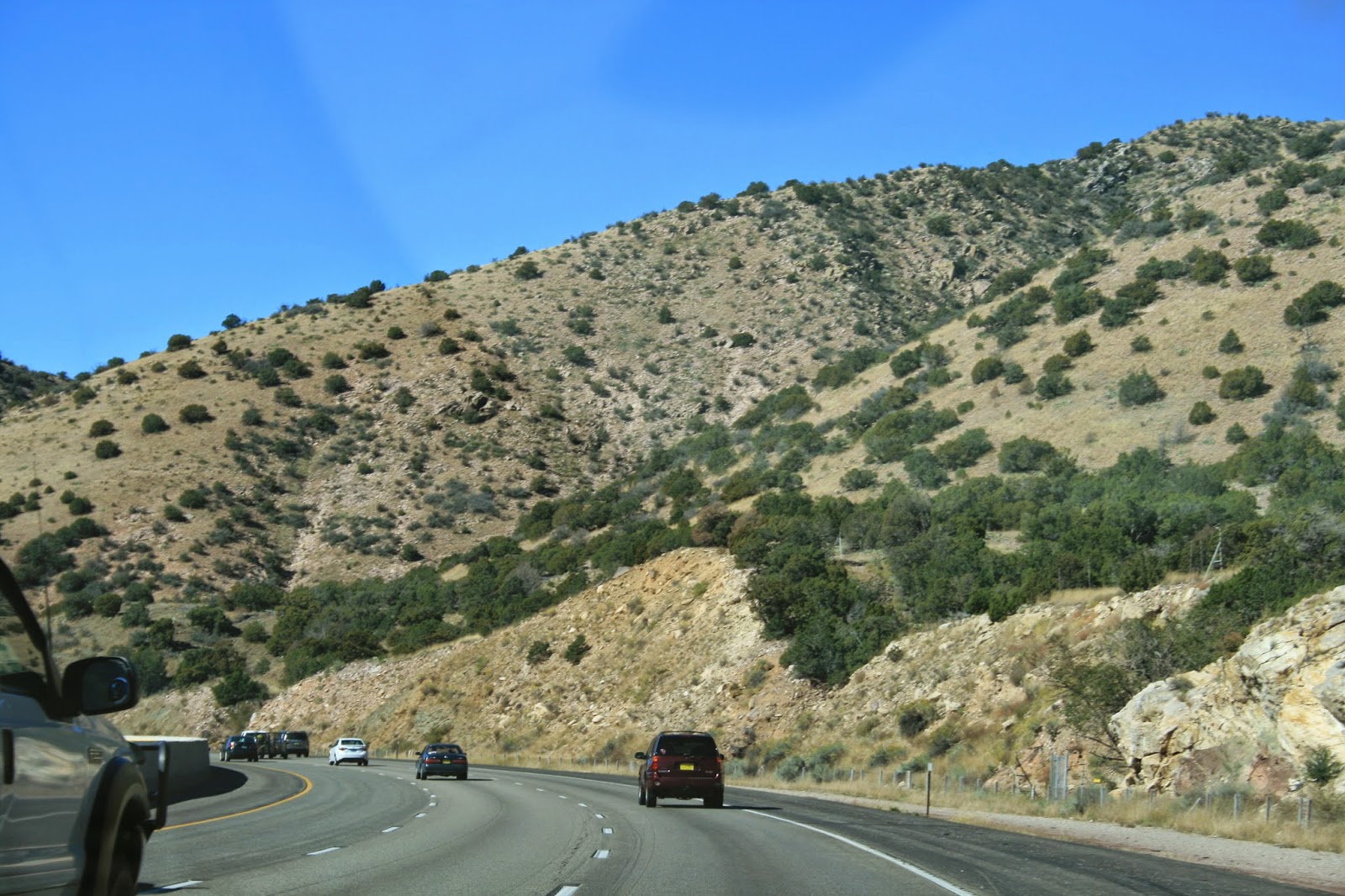 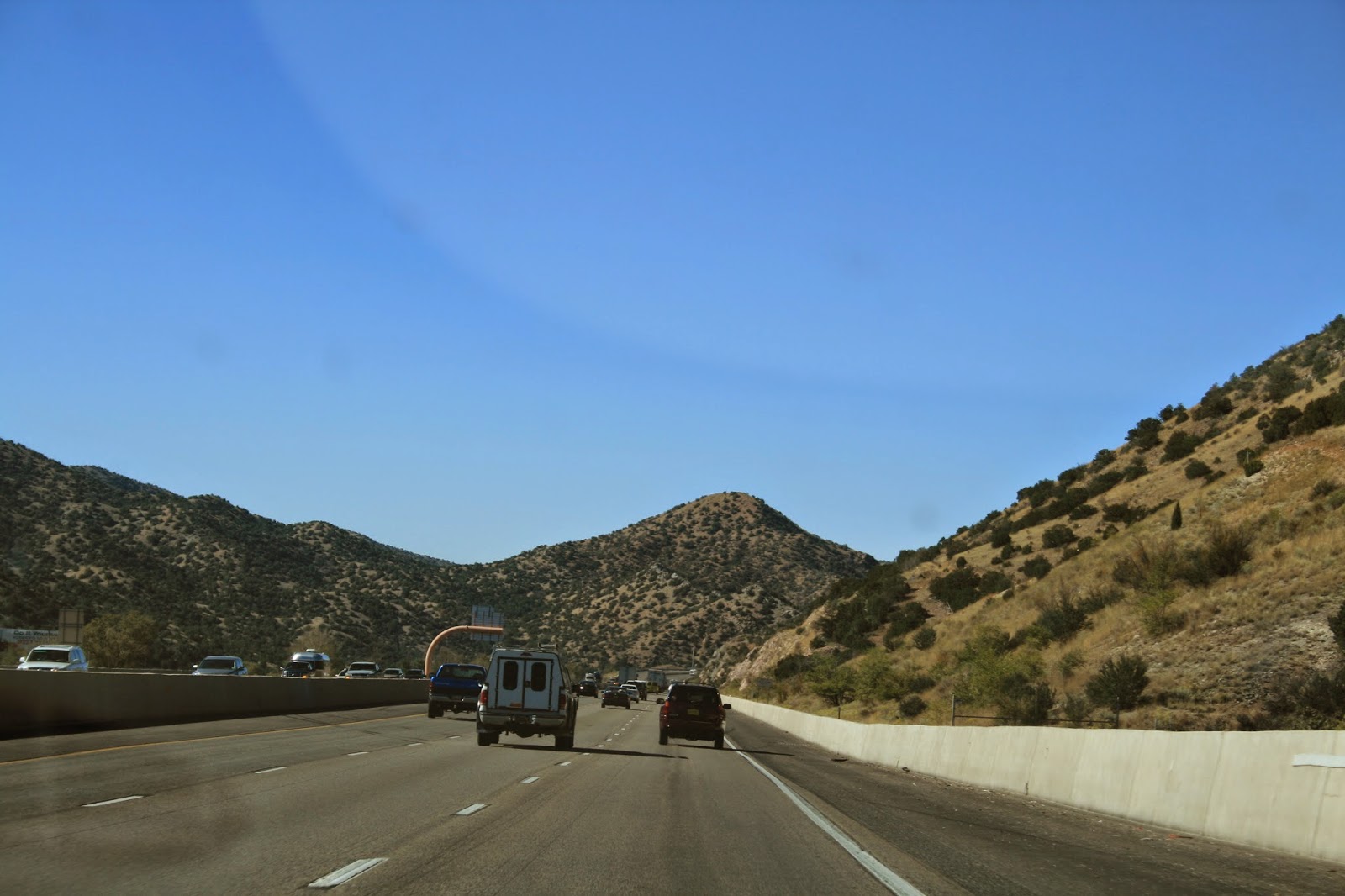 I hope you enjoyed reading about our morning adventure on the Turquoise Trail.  Next week's travel post will be all about our visit to Old Town Albuquerque.