First of all, I just want to mention that Fiona, of the blog 'Strawberry Fields' is celebrating her 1st year Blogaversary this week, so get on over there and wish her some love and enter in a chance to win some BLOG CANDY!

Now, onto my Christmas Cards, I know its October, not September, but I just finished last month's Christmas Card challenge now. But the good news is, I have ONE card done for October already! LOL! I make 5 Christmas Cards a month so I'll have 60 cards by the end of the year. I've already shown you one of September's Christmas Cards in last week's Digital Tuesday Challenge Post, so now I only have to show you the remaining four.

The first one uses a retired Stampin Up! image. I received the image from an on-line friend, so I don't know the name. I actually made this card for a Caardvarks Challenge from August where we had to use black, white, and hot pink on our cards. I don't know why I ever bother to play the Caardvarks Challenges. I never win them. They only like really weird cards, and I'm too much of a traditionalist. LOL! Anyhow, to make my card, I used my Cuttlebug to emboss the white card stock, the lower part is unknown designer paper,and I mounted the main image up on dimensionals. The ribbon is actually velvet and is so pretty in real life. 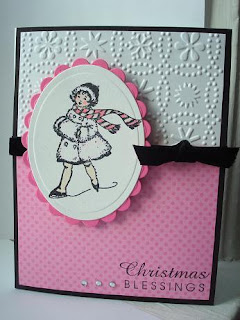 My second card was made for a sketch challenge on Splitcoaststampers. The designer paper is Cosmo Cricket. The image is 'Jolly Follies' by Penny Black. I put a 'puff' on the mouse's hat and added stickles where the snow is. The snowflakes are Cuttlebug Die Cuts. 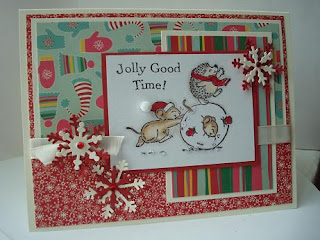 My third card was also made for a SCS sketch challenge. The paper is also Cosmo Cricket and the image is from the same Penny Black 'Jolly Follies' set. It just has the CUTEST images in it! I left off the sentiment because it already said 'Seasons Greetings' on the ribbon. 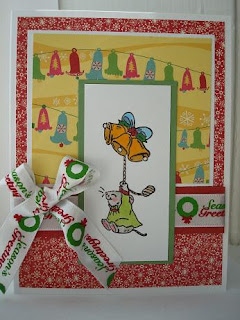 And my last card I made for last week's sketch challenge on Paper Craft Planet. This image is from Just Rite and the papers are also from Cosmo Cricket. I put liquid applique on all the fur of the snow men's hat and coats. 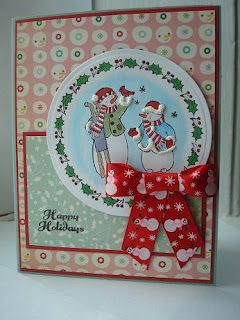 Well its only October 15 and its already snowed twice here in Northern Wisconsin. Thank goodness I'm leaving for Italy in a few weeks for a vacation. I read that its in the 50's and 60's there. Maybe I'll warm up a little. LOL! Have a good day! Amy