This week's sketch challenge was a difficult one, but I think I found a way to have it make more sense to me. I used an image that looks at the second image. Most of the stampers on SCS just used the same image twice, but for some reason, I didn't like the way that looked. Probably because it ignores the 'groups of threes' rule. I can see using the same image three times, but not just twice. So, I made this card. I also used this week's color challenges on SCS: Going Grey, Pretty in Pink and Sage Shadow. And, this card is also for this week's Crafty Secret's Challenge on SCS: have a hand-made fabric embellie on your card. I made this 'yo yo flower' out of a piece of old lace. I've never made one of these before, so it was something new to me. The images are from the Crafty Secrets 'Sweet Stuff' set and are colored with Copic Markers. I popped the little boy up on dimensionals. 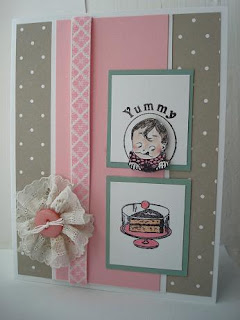 Would you believe I slept 11 hours and just woke up? I can't. That's so unlike me. But my body must have needed it. I only got 6 hours of sleep the night before because I had to wake up at 4:00 a.m. and unload a semi truck. Another girl was fired at work, and I had to fill in for her until they found a replacement. Even though I enjoyed doing something different for a change, being on the truck team on a regular basis is not something I would want to do. Mostly because of the 4:00 a.m. wake up call. LOL! Have a good day! Amy