Grandma & Me: A Beautiful Day In The Park Is Heaven On Earth

This is a pre-scheduled post.  I am currently on vacation to Utah and I will return to my normal blogging activities on September 10.

I had so much fun visiting my children and grandchildren for a week in Illinois.  It was nice to take a social media and TV break as they do not have the Internet or cable.  I did use up 75% of my cell phone data though because I HAD to post a few pictures to Facebook, so when I got home I ended up having to change my phone plan or I would have no data for my vacation in September.

The grand babies are doing well.  Atticus is six weeks old in this picture, and for the most part is a pretty chill baby although he does have some colicky moments.  It just amazes me how he can sleep so soundly in a 'Pack N' Play' in the living room with total chaos and noise all around.  Alethea would never be able to do that as a baby.  He also can sit in a bouncer for a long time without fussing.  I know it's too early to tell, but he seems to have such a sweet, calm personality.  Alethea on the other hand, is another story.  She is so out going and full of energy.  She constantly keeps me on my toes and laughing in hysterics with her funny expressions and the things she says.  They seem so different right now, both in temperament and appearance, but I know a lot can change! 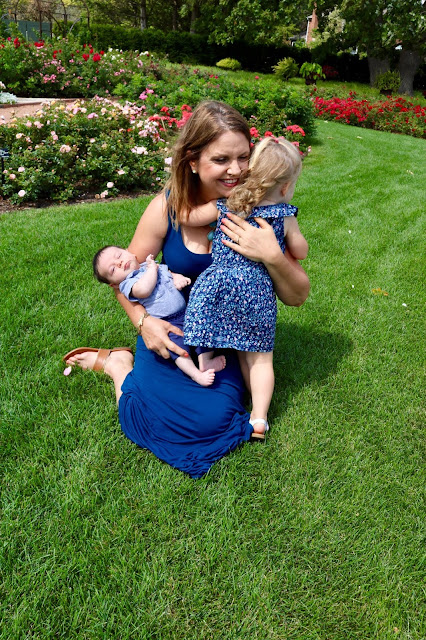 We did so many fun activities during the week, most of which you will hear about in future travel posts, but my most enjoyable day was the day we spent at Cantigny Park.  I visited and wrote about this park once before HERE, but they have been renovating the park the past few years and a lot has changed, so I will be doing a new travel post!

The weather was so perfect the day we visited Cantigny;  in the seventies, sunny, with a beautiful breeze.  The flower gardens were spectacular and filled with butterflies, bees, and grasshoppers.  We strolled through the gardens for hours.  Alethea stopped and smelled almost every flower and picked up rose petals that had fallen to the ground.  There was a beautiful gazebo and we sat there for what seemed like hours snacking and talking, and just enjoying the scenery and gorgeous weather.  It was like heaven on earth!

One of the things Alethea and I did during the week I was visiting was dance.  It all started with the Prince of Egypt song "Through Heaven's Eyes".  Alethea loves the Prince of Egypt movie (one of my favorites too!),  but she especially loves that particular song and every time it comes on she dances.  Well, I joined her one day and started dancing with her;  I saw a towel on the floor and picked it up pretending it was a scarf and used it as a prop.  She got such a kick out of it that she wanted to do it too.  So mom got out some pretty scarves and we ended up playing the same song over and over again for over an hour dancing with the scarves.  The entire week, Alethea wanted to dance with the scarves to the Prince of Egypt song every singe day.  In the picture below, she started to sing and dance to the song.  I told her mother to join her, and she did and that's how we got this beautiful photo! 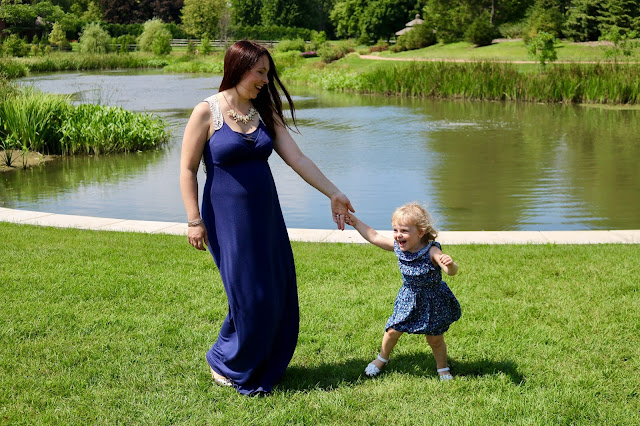 For this photo shoot, we all wore shades of blue.  I'm actually wearing one of Ashley's knit maxi dresses she got from Amazon.  My sandals are by Tommy Hilfiger and you can find them HERE. Ashley's gorgeous maxi she found at Goodwill, believe it or not!   I love the crochet back and sleeves!  Atticus wore a chambray shirt and dark blue pants, and Alethea wore a pretty floral dress with a dark blue background. 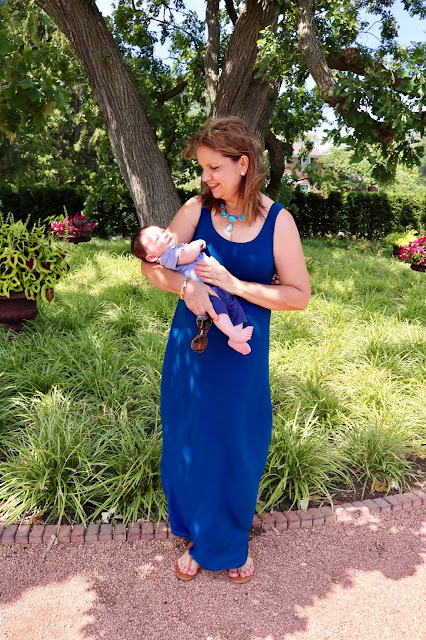 I love the pretty print in Alethea's dress along with the ruffled neckline.  The dark color will work well into the fall with a cardigan or jacket too! 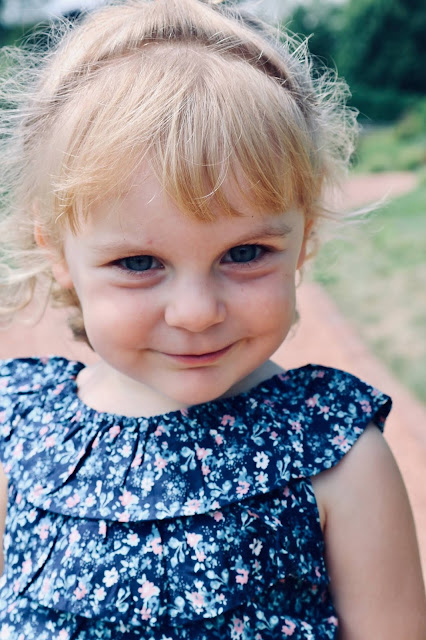 Atticus is still the cutest, handsomest baby boy I've ever seen.  His eyes are still blue, but a much darker, grey-blue than Alethea's.  We're keeping our fingers crossed that they stay blue.  He weighs 11 lbs 7 oz now and the doctor says he's doing great!  We just love him to pieces.  Every time I look at him,  I just swoon.  He is so beautiful! 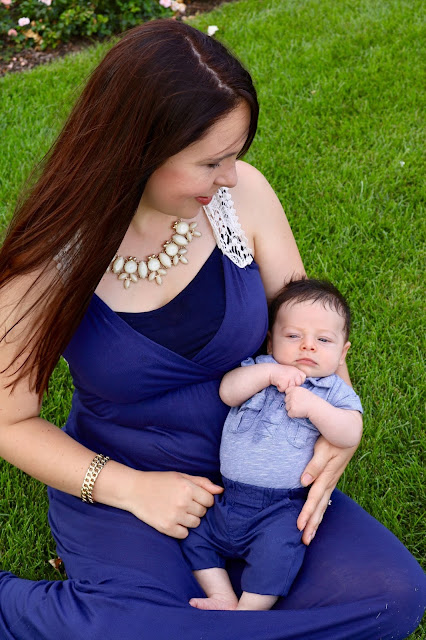 Alethea is so much like her grandma!  She loves flowers and being outside.  She was so happy exploring all the garden paths in this park. 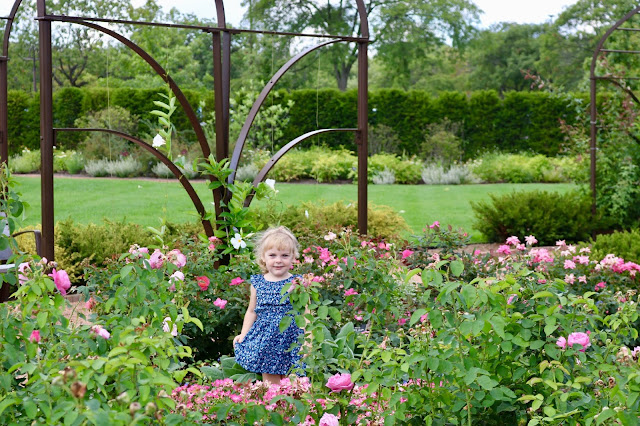 They have all this bright, fun, over-sized furniture all over the park  to sit in and take pictures.  I loved how this chair coordinated with the hot flowers of the annual garden.  And it went so well with my dress too! 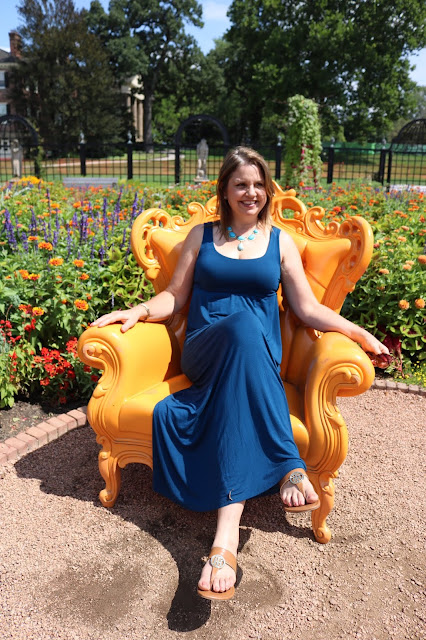 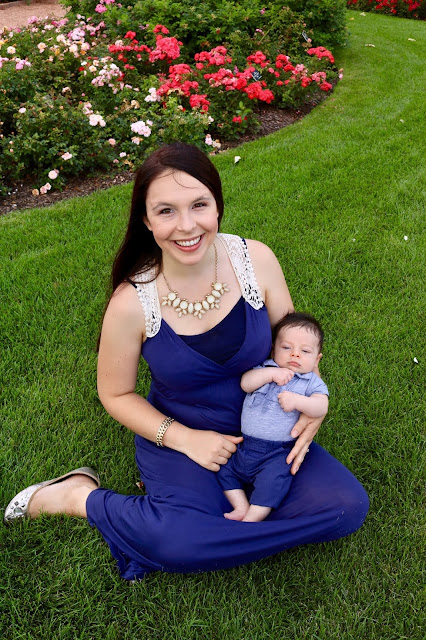 When we saw this chaise lounge by the pond we thought "Ooh, let's do some fun glamour poses!"  Of course, Alethea was so perplexed by what Mamy was doing, she had to photo bomb to check it out! 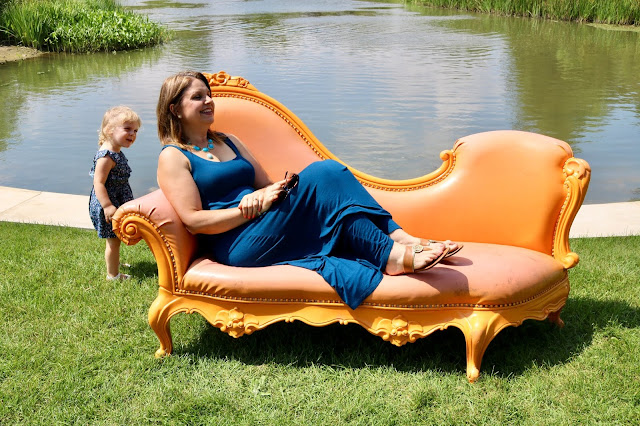 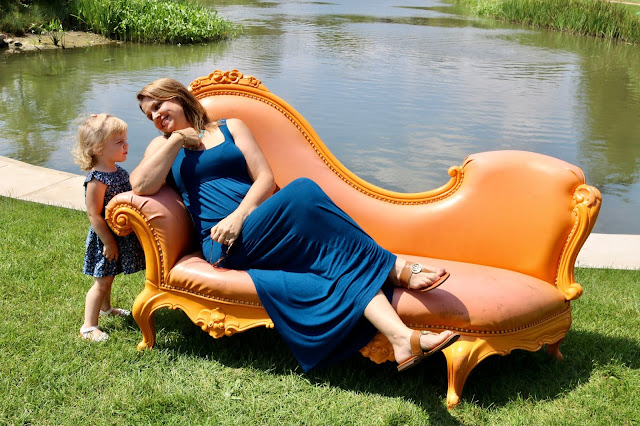 I put these two pictures side by side so you could see what really happens during a typical photo shoot with the kids.  The first picture on the left is my favorite!  It captures all my feelings and emotions of the day and what I feel like as a grandmother.  I loved it so much I made it my Facebook profile picture.  But what really happened in this photo is reflected in the photo on the right.  I was actually posing alone with Atticus while Alethea was off chasing butterflies.  But then, what she thought was a butterfly was actually a scary grasshopper so she came running to me, and threw her arms around me (photo bombing again!).  The second picture was taken just seconds after wards when I was trying to console her.  Isn't t funny how the pictures tell two different stories? 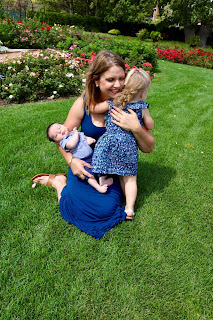 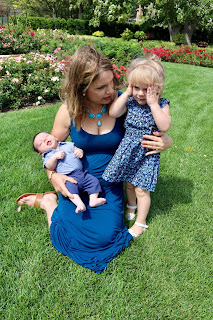 While mom took some time to feed Atticus, Alethea and I played "Peek-a-boo" around the war museums pillars. 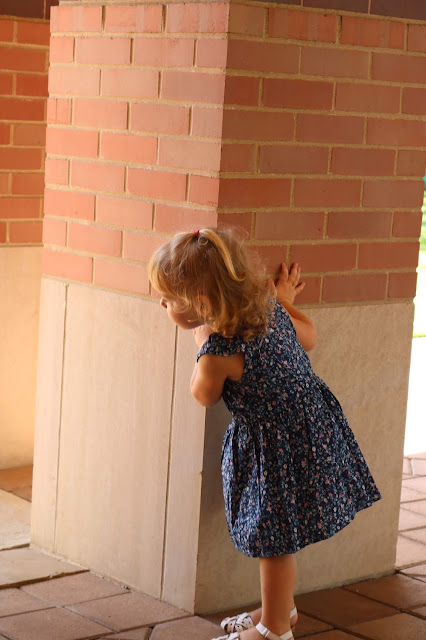 In this picture Alethea decided it was time to leave and go play in the park's playground.  I snapped this beautiful shot as she walking away. 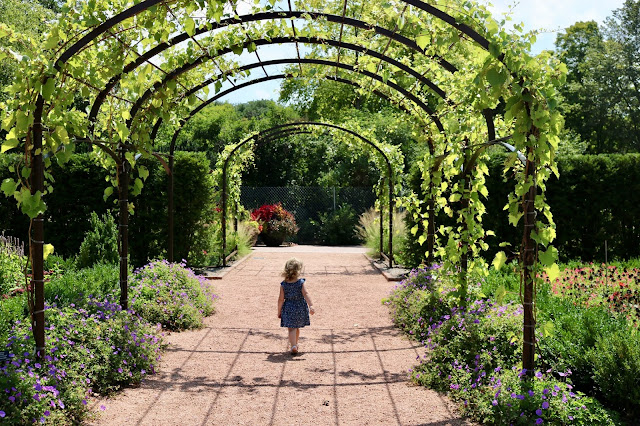 And yet, another photo bomb of Alethea's that turned out to be one of our favorite photos of the day...even Baby Atticus is smiling!  I was taking some posed photos of mom and the baby when Alethea decided to give mom some rose petals. 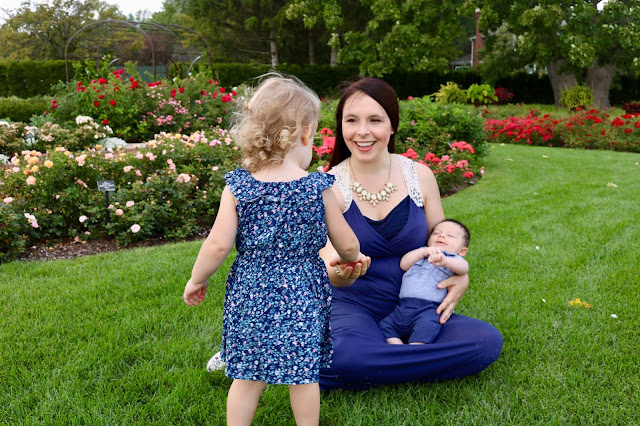 I just loved our day at Cantigny Park and can't wait to return next year.   Strolling through flower beds, out in nature, with my beautiful daughter and grandchildren is heaven on earth.