This is a continuation of a series of posts of my Missouri Vacation which I took the first week of September.  To start at the beginning go HERE.

After our morning on Taum Sauk Mountain we headed to Johnson's Shut-Ins State Park.  We first had a picnic lunch at one of the many lovely picnic areas in this park, then we headed out to explore the "shut-ins".  My husband and I were very perplexed about the name of this park and we were anxious to discover the meaning. 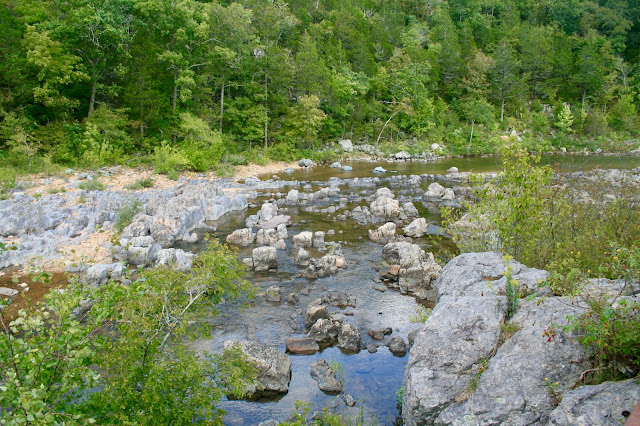 A nice trail called "The Shut-Ins Trail" leads you to the Shut-Ins you see in the picture above.  But all the warning signs were kinda scary for me since I can't swim and I am always nervous around water.

The first warning sign you see are these signs explaining the flags.  The flags inform visitors of the water level flowing through the shut-ins and access to the swimming areas.  A green flag means the river is low, the gates are open, and it's safe.  Whew!  I could now breathe a sigh of relief! 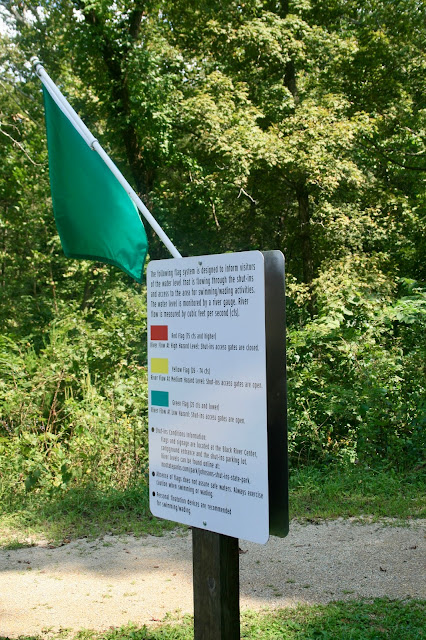 However, flash floods can happen at any time, so there were plenty of these orange signs around.  Basically, if the siren goes off, run, and run fast and UP! 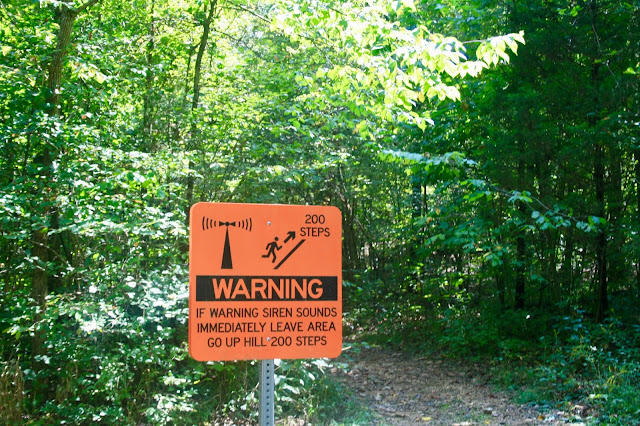 There was a lovely boardwalk leading down to the shut-ins.  We encountered several swimmers coming back from the swimming areas. 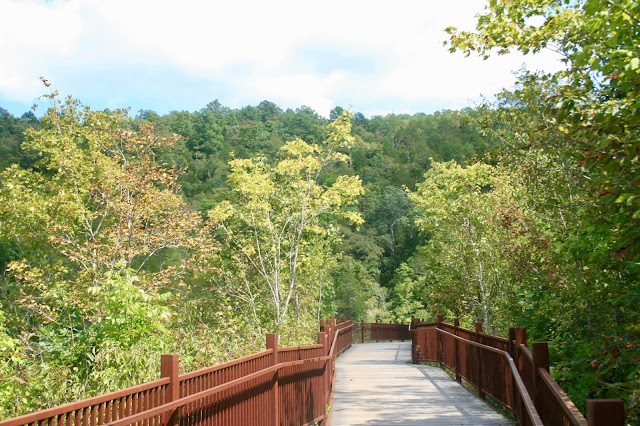 Well by now you're probably like us wondering what the term "shut-in" means.  It is a basically a gorge with some unique rock formations inside the river.   But Wikipedia further explains the "shut-in" terminology this way:

The term "shut-in" refers to a place where the river's breadth is limited by hard rock that is resistant to erosion. In these shut-ins, the river cascades in many rivulets over and around igneous rocks worn smooth over many eons. It is used by park visitors as a natural water park when the water is not so high as to be dangerous.[6] 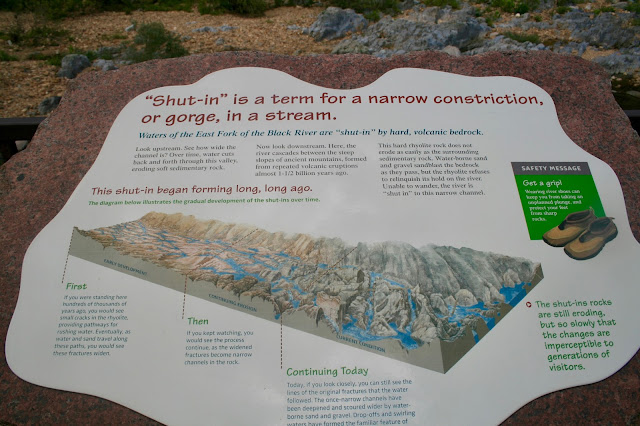 The rock formations are fascinating!  They all had these cracks in them that made them all the more interesting. 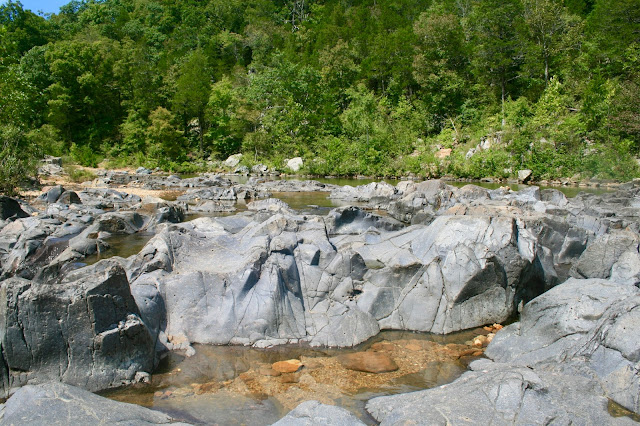 There were little pools of water and mini waterfalls around all the rocks.  It was fun to rock hop and sit or play in some of these pools.  Just remember to bring water shoes, as the rocks are slippery and sharp! 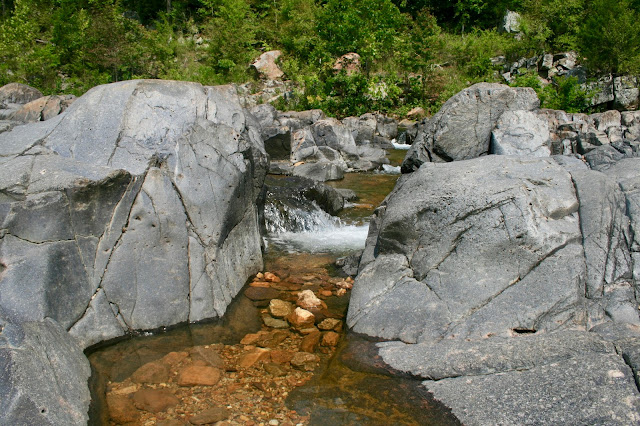 I was able to get into and play in the water more than my husband as I wore both water shoes and a swim suit.  This is the active wear swimming suit that I showed you on my vacation fashion post HERE.  It can be worn hiking, kayaking, exercising, swimming, and anything else you can think of! 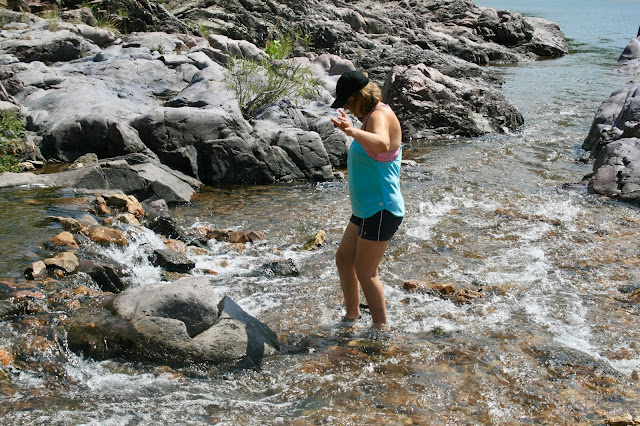 I even was brave enough to sit in a little waterfall area...it felt like a jet spray in a hot-tub on my lower back;  minus the hot water of course! 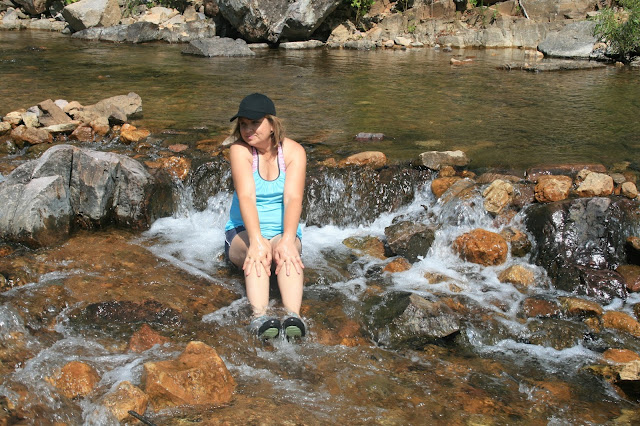 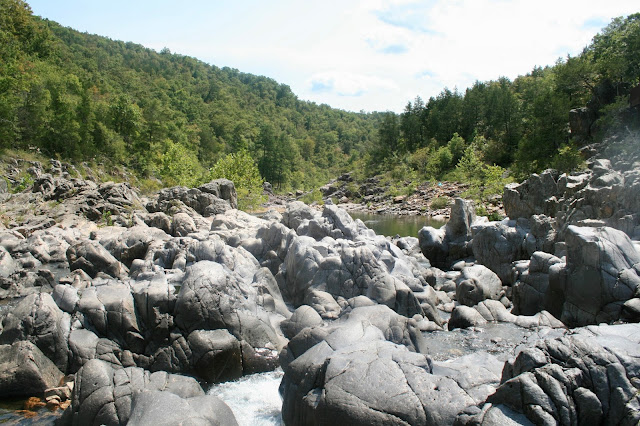 To give you an idea of the breadth of this place, my husband is walking on top of the shut-in rocks in the two pictures below.  Can you spot him?  He looks like an ant!  Finding him is as difficult as finding Waldo! 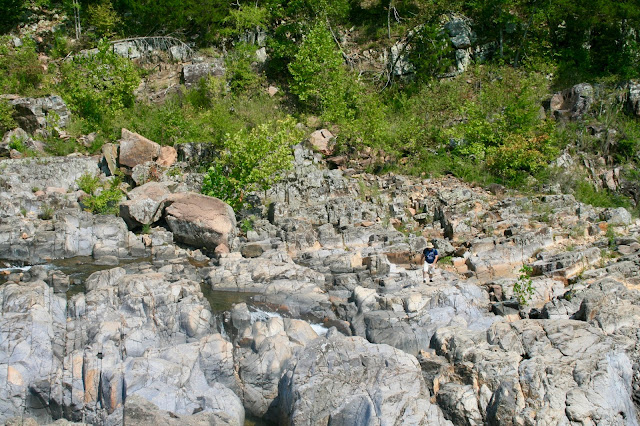 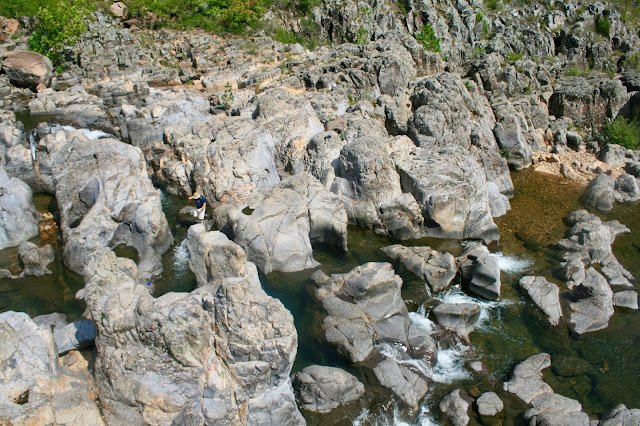 This is a large swimming hole.  I have no idea how deep it was, we didn't go swimming in it because my husband didn't have a swimming suit or water shoes.  I couldn't go myself, being unable to swim and not familiar with the depth of the water.  These two men in the picture were under-water exploring. 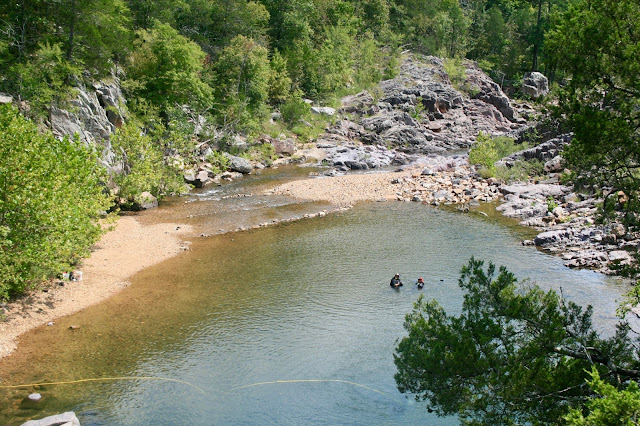 After we were done rock-jumping and playing in the water, we got back onto the "Shut-Ins Trail".  It's a 2.25 mile loop that takes visitors to the namesake of the park, which is in all the pictures above. It is wheelchair accessible up to the observation desk.  After that, it is not, for it goes up a stairway and then through a forest, rocky terrain, and open glades with more gorgeous river views. 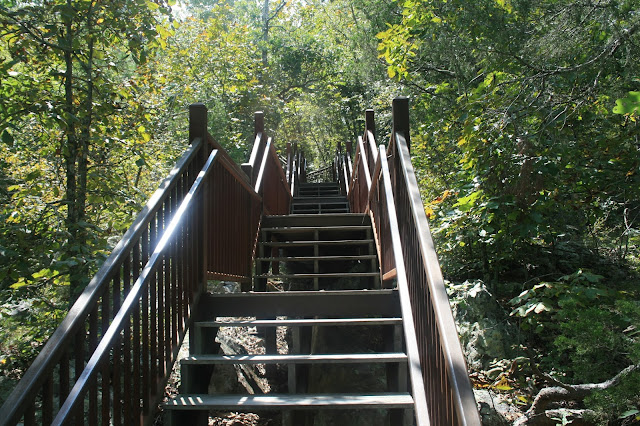 You get some great views from observation decks above the "shut-ins". 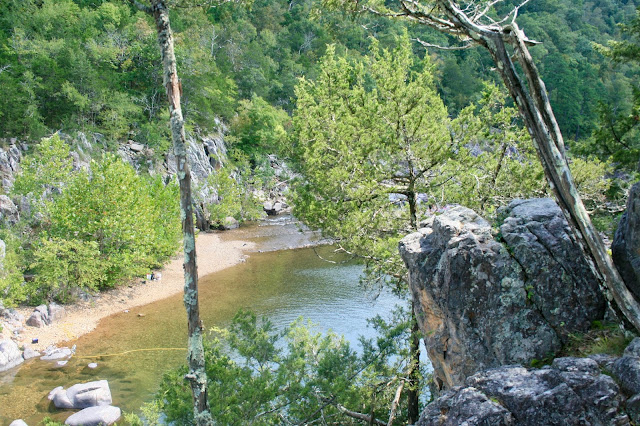 In the upper left corner you can see the observation deck. 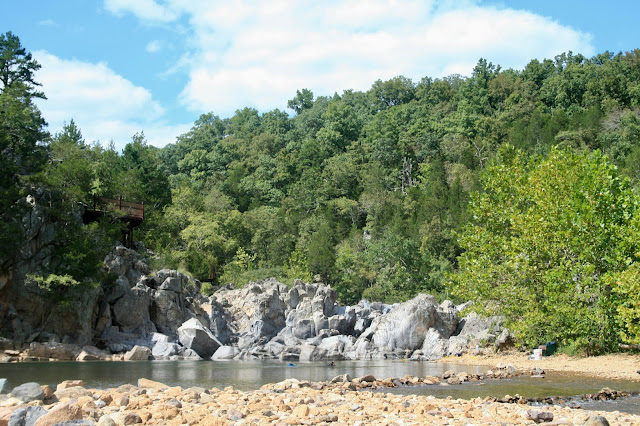 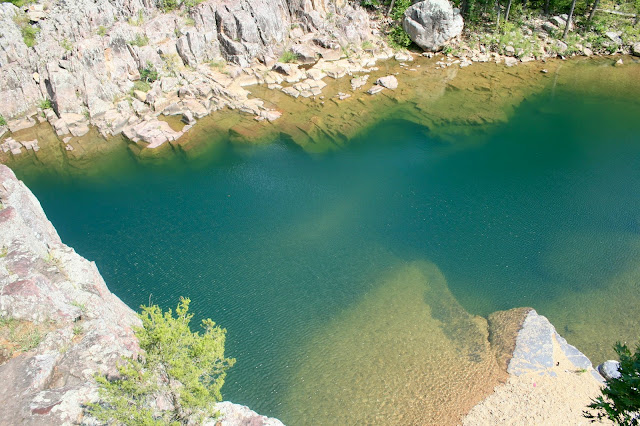 Even though there are "No Diving" signs placed in this area, people do still dive into the water from this spot...can you believe it?  I found some videos on YouTube.  They seemed apprehensive about it, but they still did it.  Crazy! 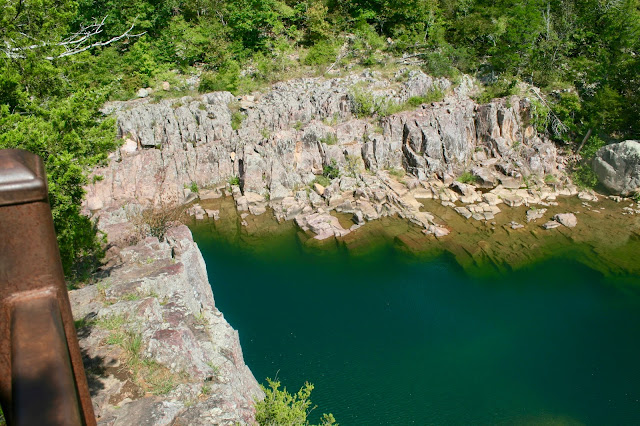 After that amazing view we basically were led through the woods, then eventually back down to the river again.  It was on this trail that we smelled a strong urine odor and we were worried we might come across a bear.  Even though we saw several groups of people down at the "Shut-Ins" we didn't see anyone on this trail, so I was slightly nervous. 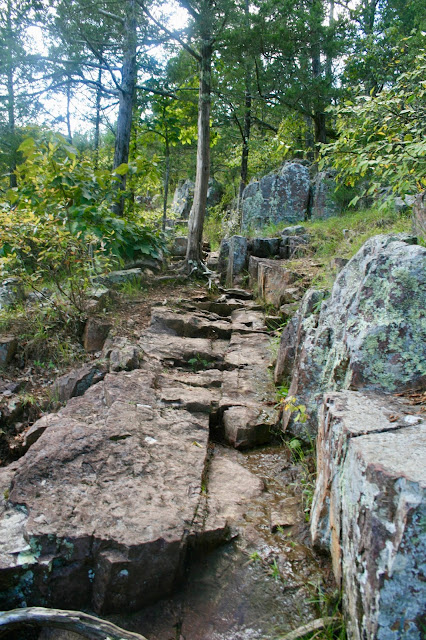 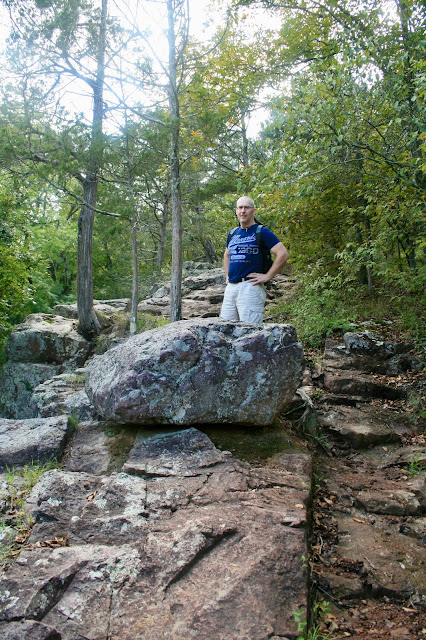 The trail was fairly easy to follow.  When it took us back down by the river it was a little creepy because it was very narrow and overgrown.  We could only walk in single file, and the weeds were smacking us as we walked by. 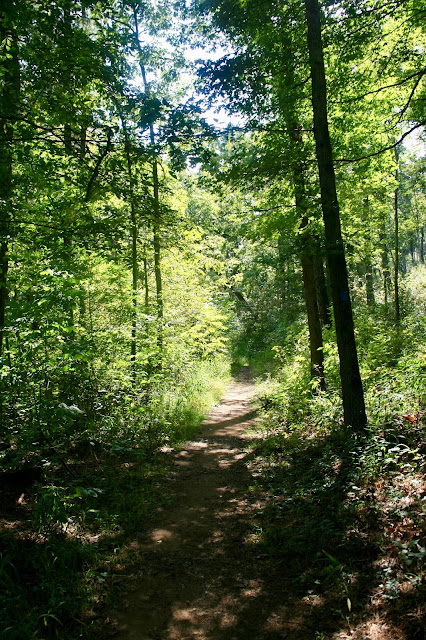 But once we got past the weeds, it opened up to a beautiful sight! 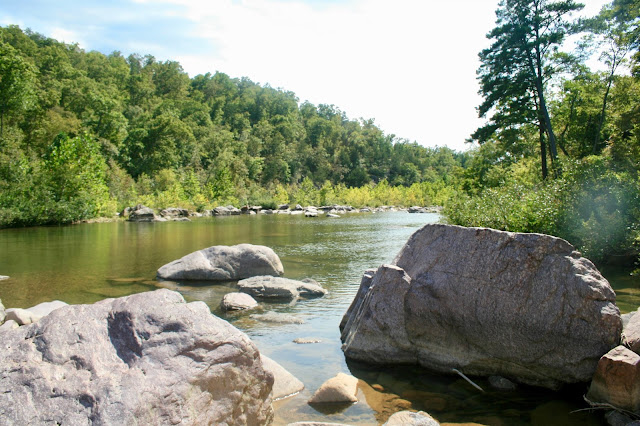 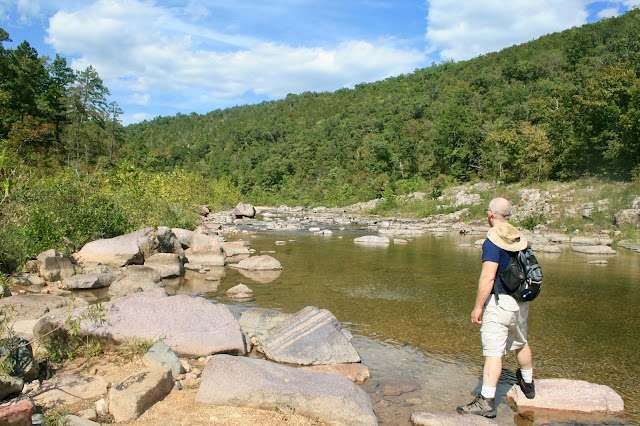 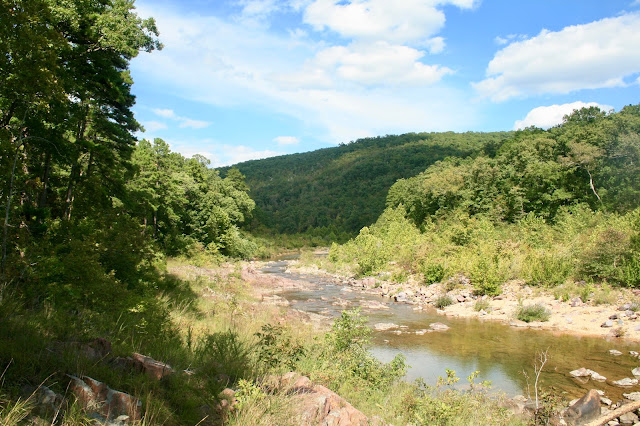 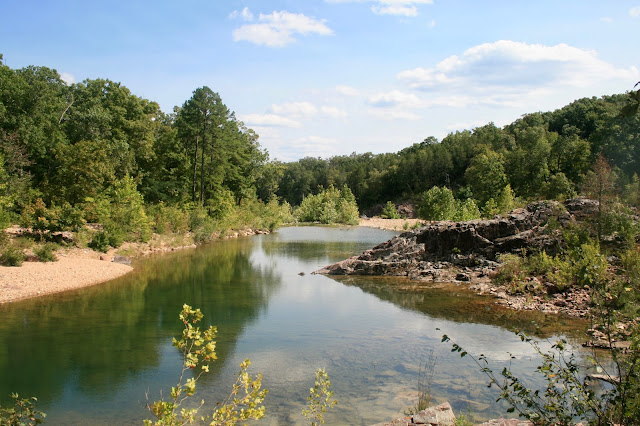 We also found a pretty creek and a little waterfall on this trail!  That was exciting. 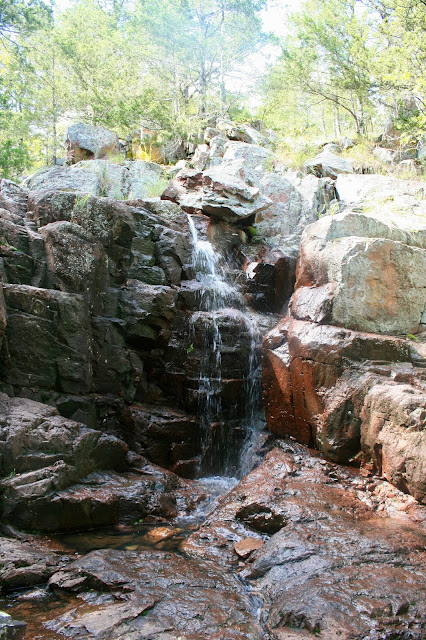 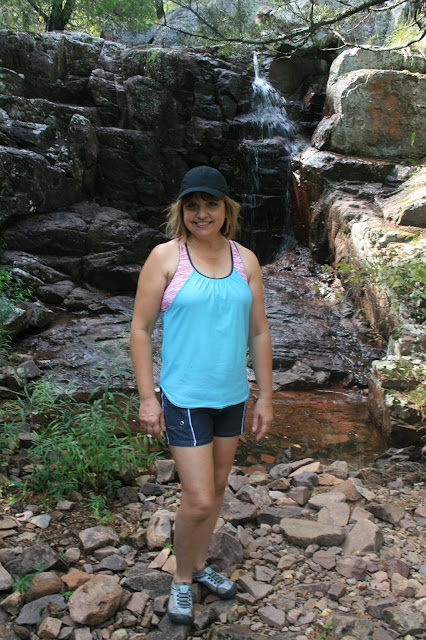 There were some very pretty rock formations on this trail too. 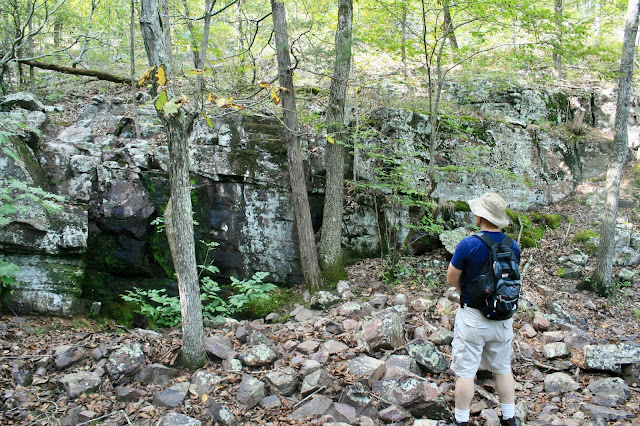 And finally, one of the things that surprised us about Missouri were these little lizards!  We saw them everywhere we went.  We're use to seeing these little guys in Florida, but we didn't think Missouri was warm enough year round to have them as well...but they obviously do! 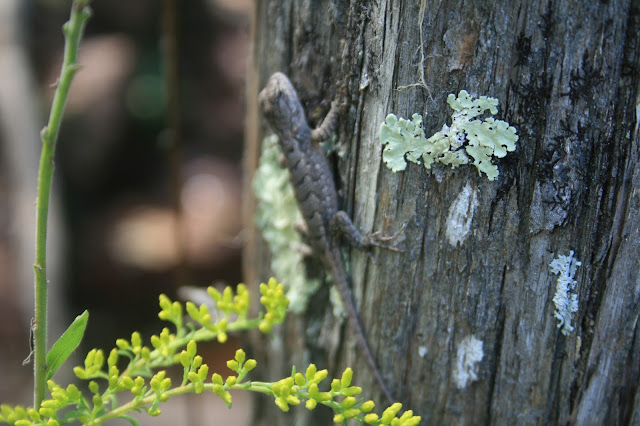 During our six days in Missouri, we visited six state parks and "Johnson's Shut-Ins" was one of our favorites!  If your ever in the area, be sure to check it out...and don't forget your swimming suits and water shoes!