If your back looking for my weekly travel posts of my Missouri Vacation,   I am taking a break this week to cover our weekend exploring Wisconsin's Beautiful fall color!

Every fall my husband and I like to get in our car and take long drives to see Wisconsin's Fall Foliage.  This year, weather has hampered our drives.  Most of our weekends have been cold and rainy, so we haven't done quite as much this year as we would have liked.  So far we've only been to Timm's Hill and Rib Mountain (we're going back to Rib Mountain next weekend because the colors weren't peaked yet and we wanted more time on the trails).  We made other attempts to other locations, but rain sort of ruined the day.  This past weekend, it rained all day Saturday, but Sunday, though chilly, was only partly cloudy, so off we went again!

After a great church service, we grabbed some lunch and we drove to Hoffman Hills State Recreation Area in Dunn County, Wisconsin.   If that name sounds familiar to you, it's because we went there last year too and I covered it in THIS POST.    This year, we went a few weeks later, and the color was so much more vibrant! 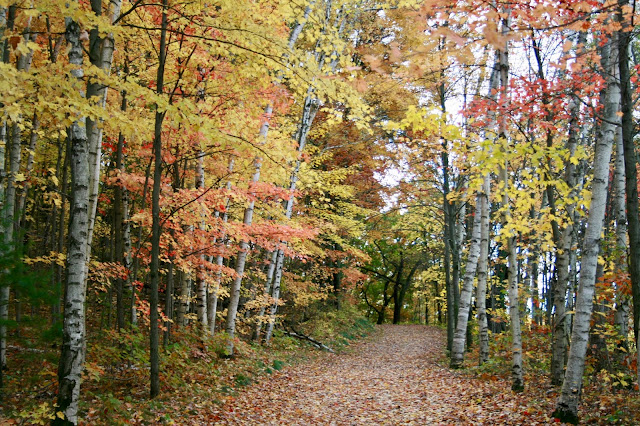 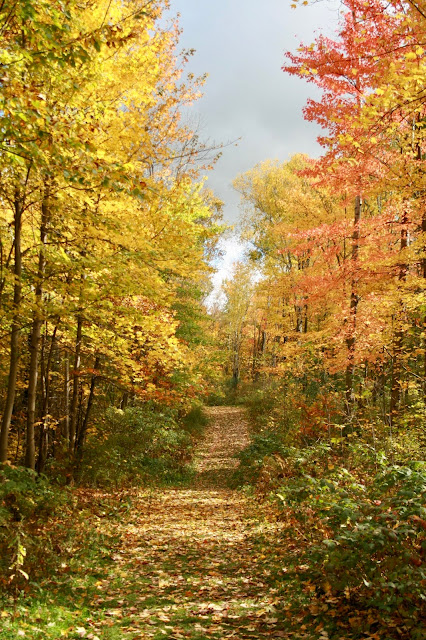 I did several Instagram Stories while we were there, but I'm posting some of them here since I know Stories disappear in 24 hours.  They are all super short, but they help capture sights and sounds photographs can't always do.

My husband, the photographer, often walks far behind me to capture images like this. 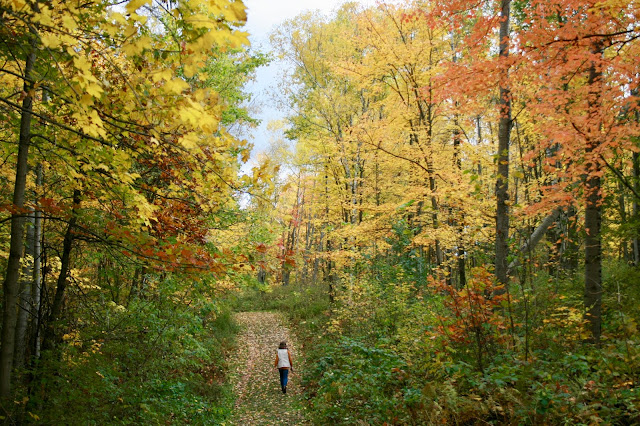 We didn't spend a long time hiking in this park like we did the year before because we wanted to go to Maiden Rock later in the day.  We really just wanted to see the view from the Observation Tower;  so we parked in the overflow parking lot and took the shortest, quickest trail to the observation tower.


The view from the top of the Observation Tower was phenomenal!  So much better than last year, even on a partially cloudy day! 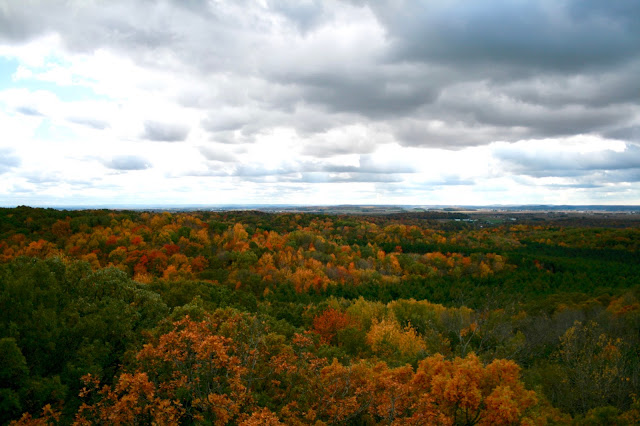 Can you believe this color?  Amazing!!!!  Gosh, I wish this color would last longer.  It's so beautiful! 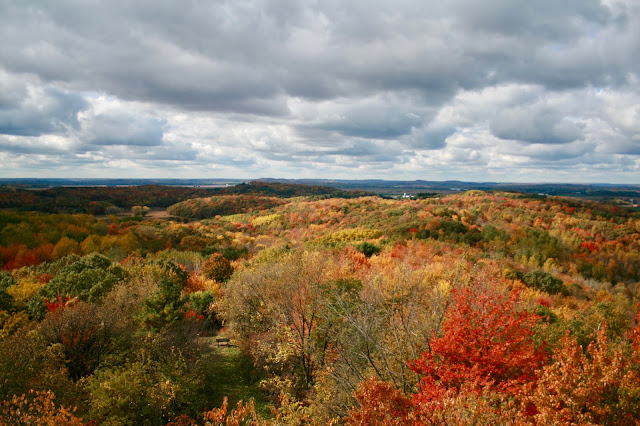 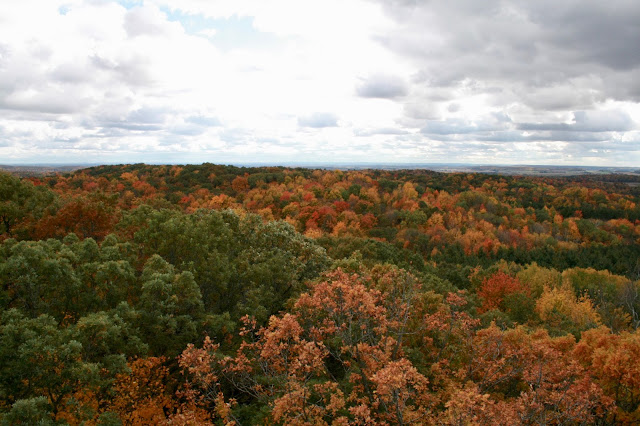 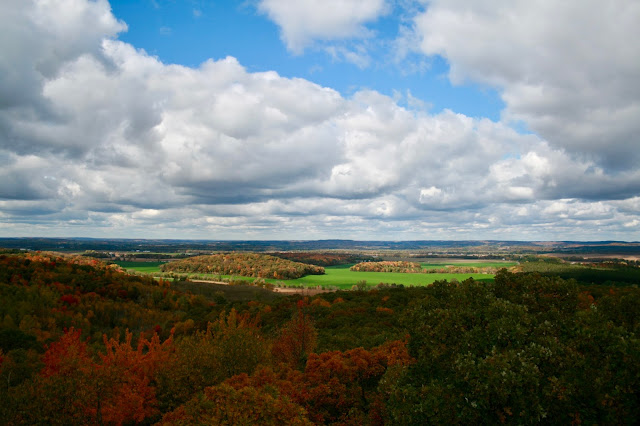 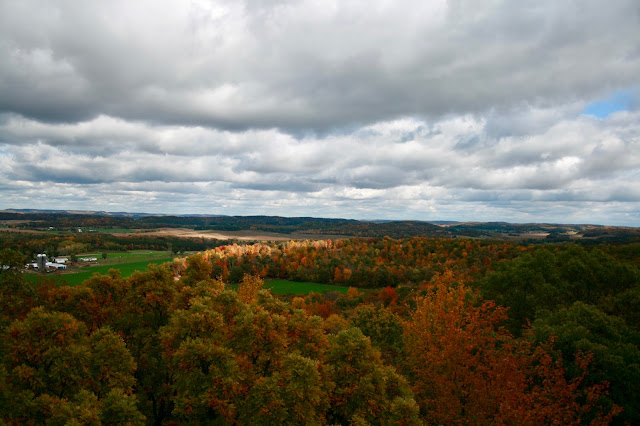 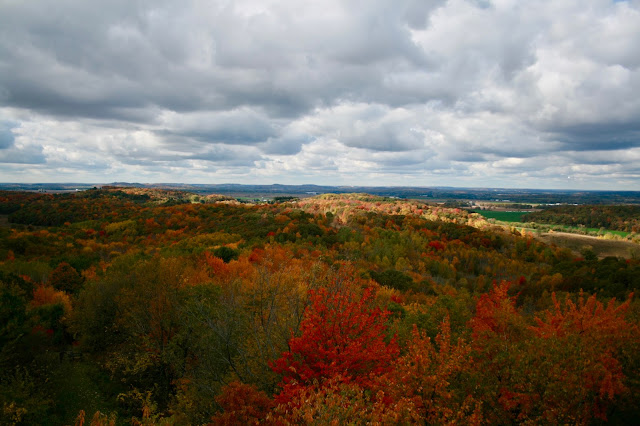 I took a short video where I walked a full circle on top of the tower so you get an entire 360 degree view.


It was much warmer last year than it was this visit.  Last year my husband and I both wore shorts, this year we had sweaters on!  And for those of you who read my fashion posts, I will be featuring this outfit on Friday! 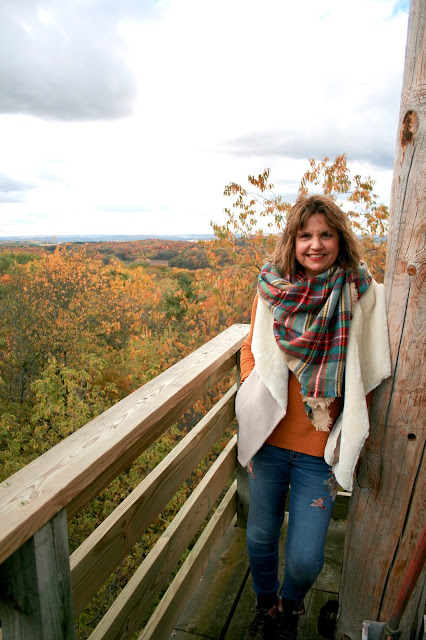 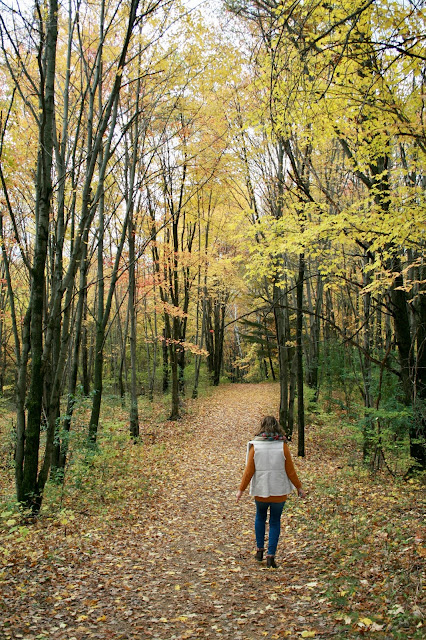 So many leaves were falling already 😢 however, it made the path very pretty and fun to walk on when our boots crunched the leaves.  I love the picture below.  If you look closely, you can see the yellow leaves falling off the trees. 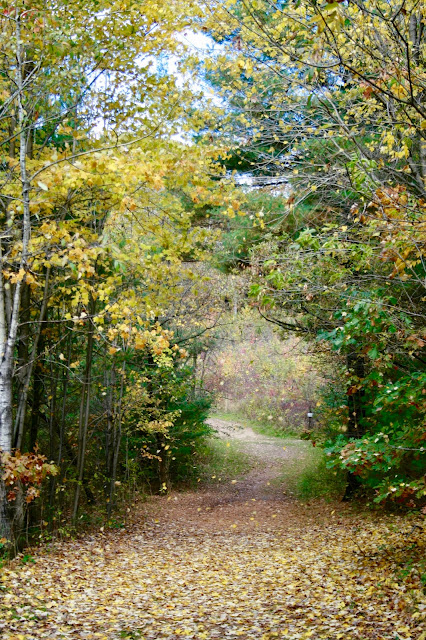 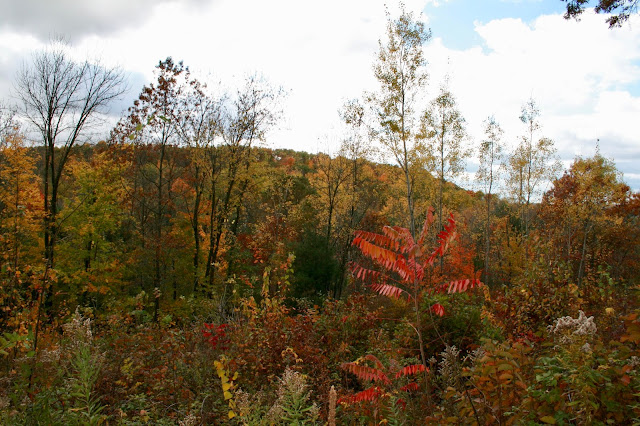 When I looked at last years post, I saw this same area photographed and I couldn't believe how much more color there was this year!  What a difference a few weeks makes! 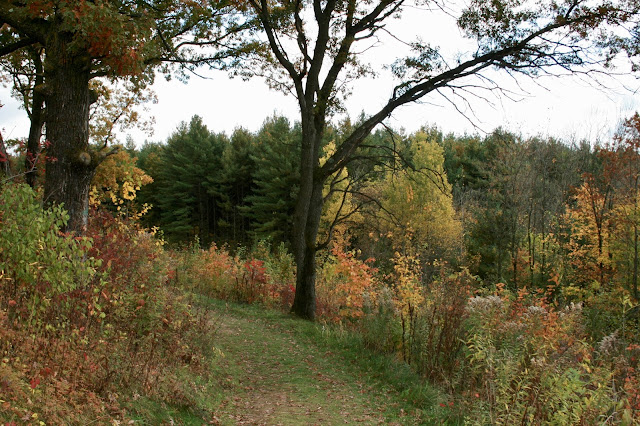 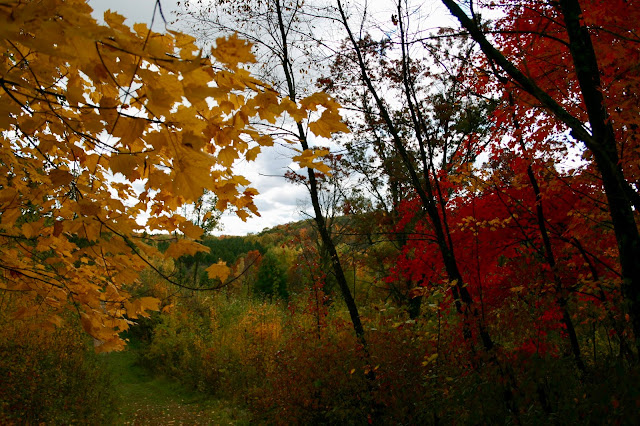 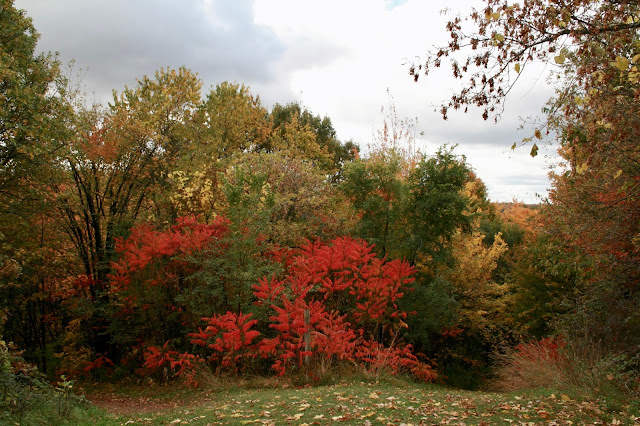 This picture turned out slightly blurring, but it ended up being a real cool effect because it kind of looks like a oil painting. 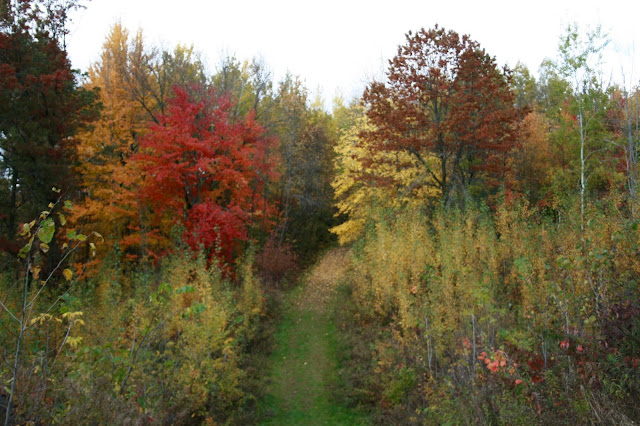 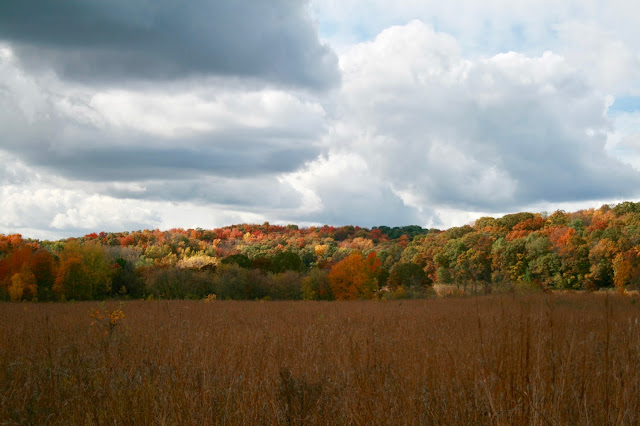 After our short hike in Hoffman Hills we then drove to Maiden Rock Wisconsin.  I had seen this picture on Instagram and said to my husband "We have GOT TO find that spot"!  So off we went!

It wasn't that easy to find.  We knew where Great River Road was, but we did not know how to get to the top of Maiden Rock where the picture was taken.  My husband then found an article somewhere that told a story of the Maiden Rock legend and it gave us the names of two roads that I was able to put into my GPS (for my Wisconsin readers it is Long Lane and County Road E).  We then headed to that area and found Long Lane which ended up being a dead end with a trail to the bluff at the end of the road.

There was a small parking lot and a sign that said "Maiden Rock Bluff State Natural Area" but no maps.  There was nothing but tall weeds surrounding the parking lot.  My husband headed into the weeds but I thought "No, there has to be a path.  No one would be willing to walk through those tall weeds" and I found it farther back down the same road we came in.  It was just a mowed path with tall weeds on either side. 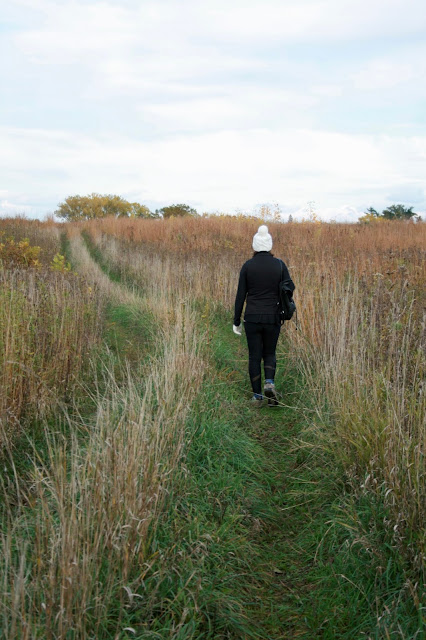 The article that my husband found said the trail was for "Hardy hikers who are game for a vigorous hike" so my husband had me change clothes because he didn't want me to ruin my new embroidered jeans (Or did he not want to pay for a new pair? Hmmm. JK!).  We did not find the trail lived up to the description at all.  Other than having to step into some mud and the occasional prickly weed, it was a very easy, short hike from the parking lot to the scenic view.  My guess would be a half to three quarters of a mile one way, all on flat land.

Most of the walk is through a field, but eventually the trail curves to follow the Mississippi River.  There is a barbed wire fence on the edge, but the cliff literally just drops right off! 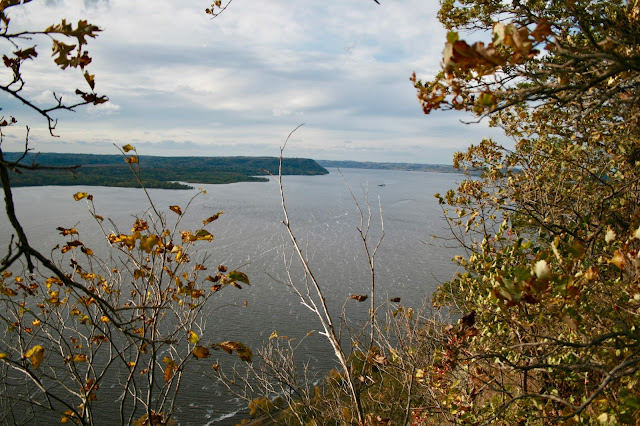 The colors weren't as spectacular as they were in the Instagram photo.  I don't think we were late, I think that photo was probably taken last year as they looked like the leaves were just about to turn when we were there.  (If they had peaked already, the trees would be bare, not still green). 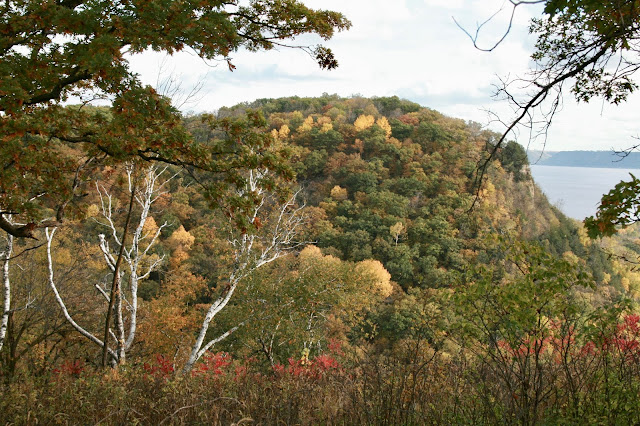 When we finally reached the top of Maiden Bluff we immediately recognized the scene from the Instagram photo.  Is this gorgeous or what?  Oh my gosh what a view!

The road is Great River Road and it was named Wisconsin's Ultimate Fall Drive...and yes, we drove it and it was AMAZING! 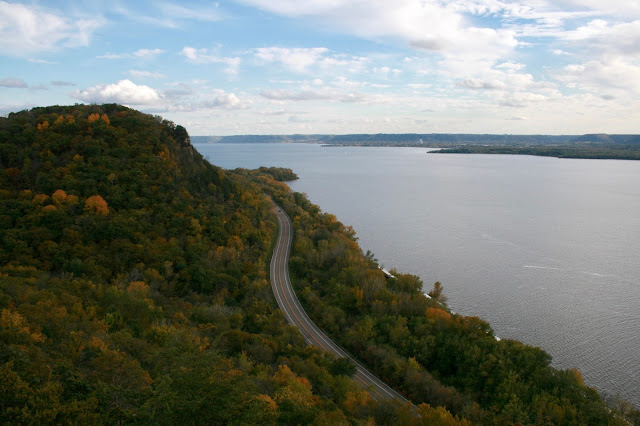 I also did another 360 degree video so you can get a better idea of this view.


Maiden Rock has quite a legend too!  There is an old tale that a young Dakota girl, distraught over her family's insistence that she marry a young man not of her choosing, threw herself over the edge of the bluff overlooking the river rather than face a lifetime with a man she did not love.  Isn't that sad?  I hope it's not true!

I found a couple of pictures on the Internet that were taken from a distance so you can see where we walking and standing.  This is a side view of the cliff (or otherwise known as Maiden Rock) where I said the trail curved and ran along the Mississippi River.

While we were there, we were fortunate enough to see both a train and a barge go by. 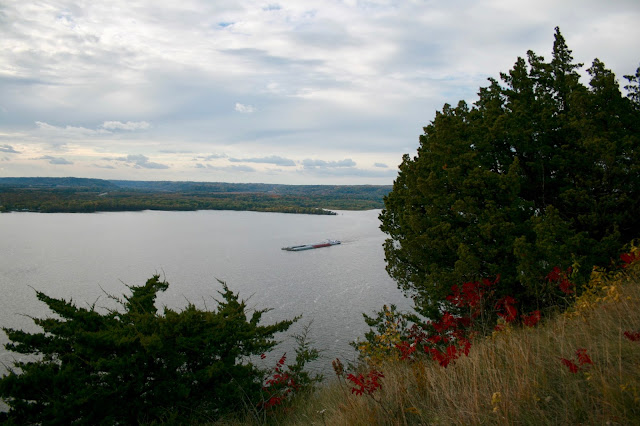 We had such a wonderful day exploring our own state and seeing the fall colors.  We plan to go on another adventure this weekend!  The weather is suppose to be warmer, and hopefully a little bit sunnier.  I can't wait to see what we will discover and I'll be back next week to share it with you.  Be sure to follow me on Instagram where I will post more live videos!