How To Make An Owl Pot Holder

I have been noticing that all of my kitchen pot holders either have a hole in them or are quite grungy.  At first I was just going to buy new ones, but then I decided that since I had enough fabric in storage to open my own fabric store that I would just make a few.  I had an old Legacy pattern (which is still available for purchase HERE),  laying unopened for years, so I decided to give it a try. 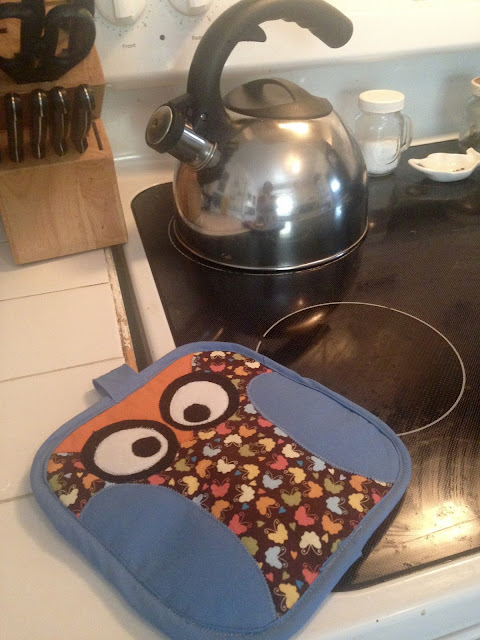 Isn't this pot holder design just so cute?  Now, I've included the link to this pattern above, but anyone could make it without the pattern as the design is just so simple.  Here is a picture of the pattern and examples of other owl pot holders. 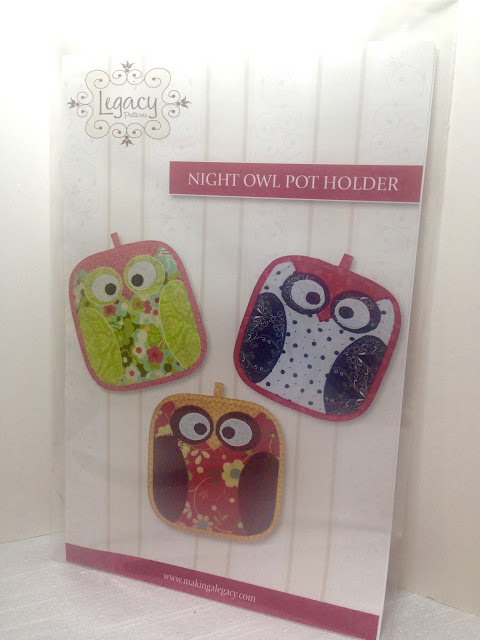 The pattern comes with these shapes that you just trace onto fusible webbing and cut out.  If you already have a standard pot holder in your kitchen, you could use that to get an idea of the sizes of your shapes.  It's pretty much just a triangle for the head/nose, three round shapes for the eyes, and two ovals for the wings.

For all the non-sewers out there, fusible webbing is an interfacing that seamstresses use in appliqué projects.  One side is sticky once ironed, and the other is not.

I just laid down my fusible webbing and traced the shapes onto the webbing with a pen, then I cut all the shapes out. 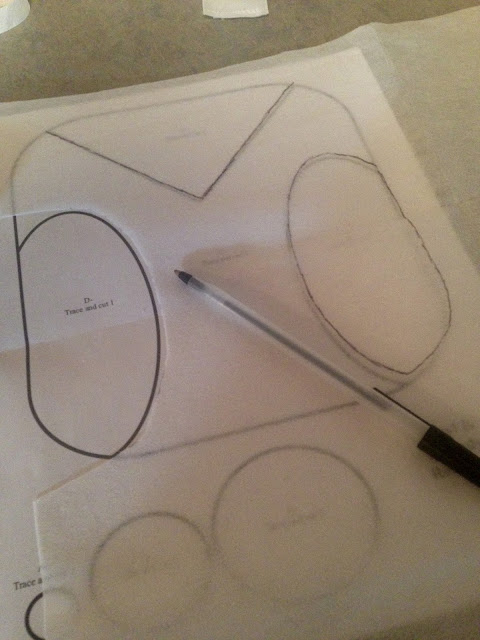 Now for the fun part;  choosing the fabric.  Like I said earlier, I already have a lot of fabric, so I just looked for three coordinating fabrics in my stash, plus black and white for the eyes.

I chose this pretty butterfly fabric for my back and body of the owl. 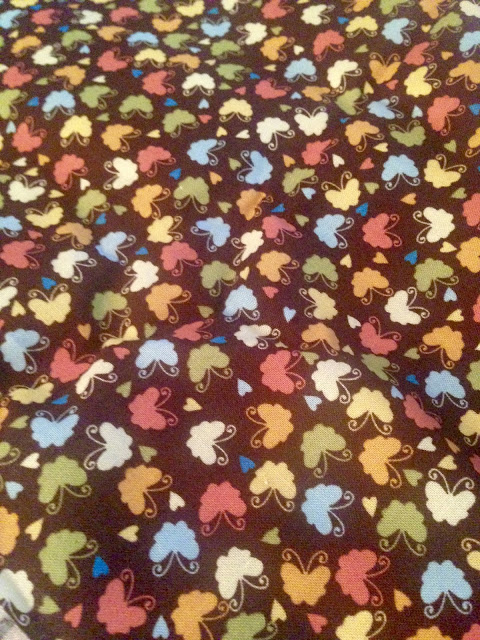 I cut two squares with rounded corners for the front and back of the potholder using my fusible webbing as my pattern. 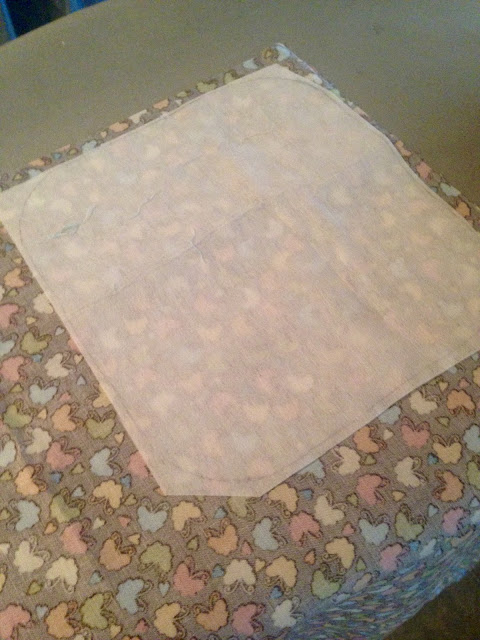 Now to cut all the fun shapes.  Four circles of black fabric were cut for the eyes (two large and two small), and then two white fabric circles too.  I used a solid blue fabric for the wings and a solid orange fabric for the beak/head.

I simply ironed the fusible webbing pattern pieces directly onto the fabric, then cut out all my shapes. 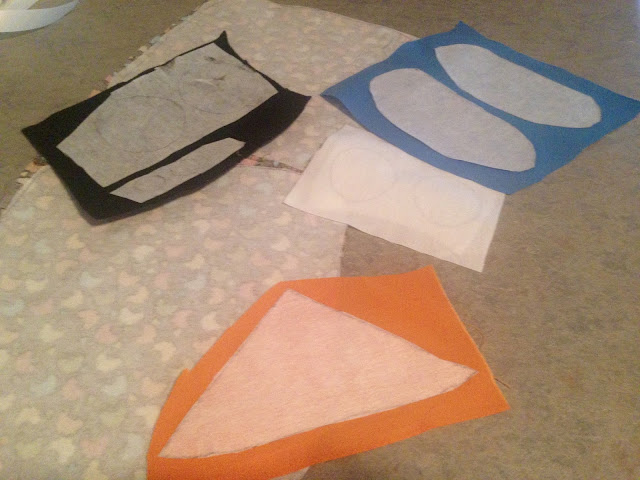 Once everything was ironed on and cut out, I arranged my shapes onto the front of the pot holder. 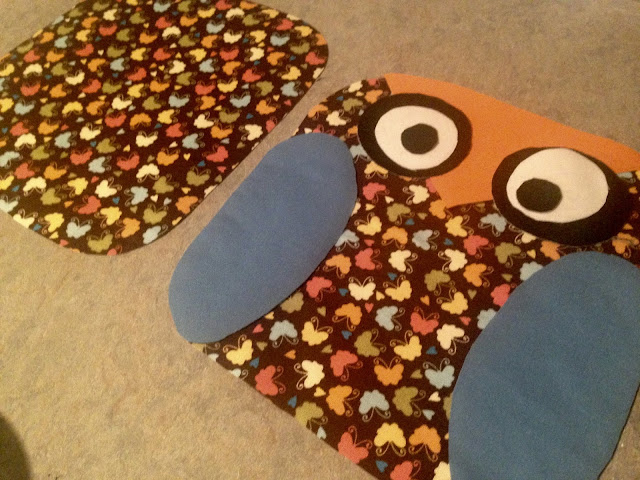 Now it gets a little tricky for the non-experienced sewer:  appliqué!  If you never appliquéd before, it's basically a zig zag stitch around the edge of your appliqué to adhere it to your fabric.  The hardest part is getting the zig zag just right.  I had to practise with scrap fabric and play with both the length and width of my zig zag stitch settings till I found one I liked.  Every machine is different, so you just have to play around with scrap fabric till your comfortable to move onto appliquéing your project.

I pinned my piece only in the center so I could appliqué around the piece freely. 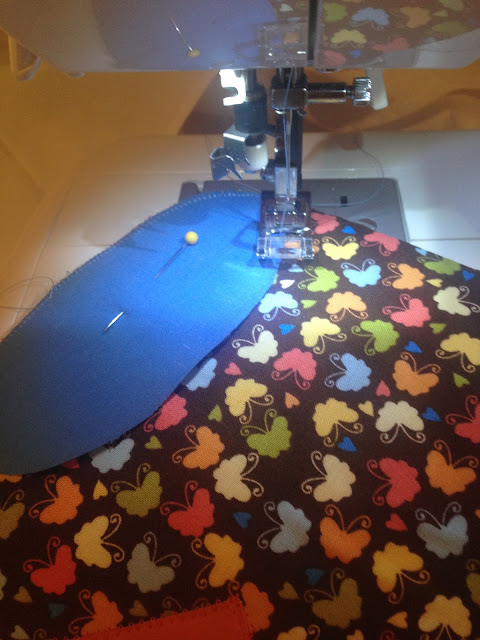 I had to change thread colors a lot, which was a pain, but it is worth that extra step if you want to pot holder to look nice.  Here is the pot holder with the pieces appliquéd on. 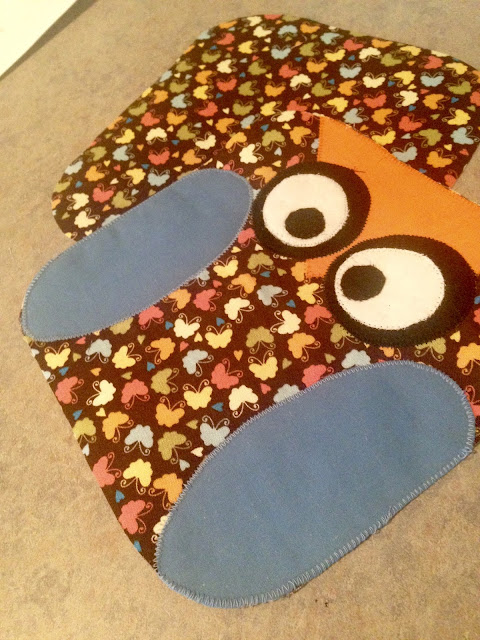 And here is what it looks like on the other side;  which you won't see once the pot holder is finished. 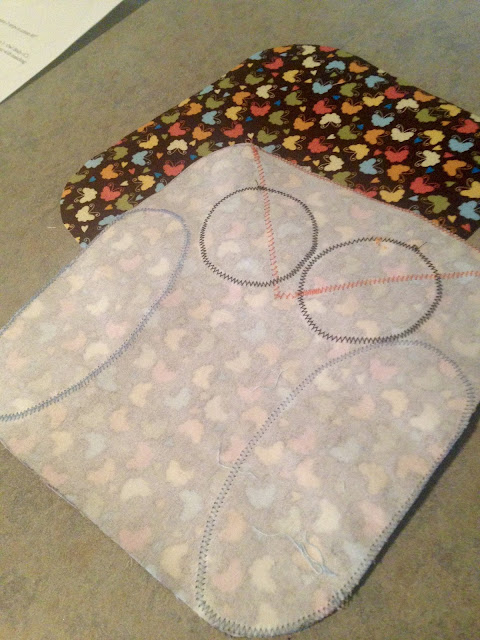 The next stop is to add your Insul-Bright.  This is what you need to keep your hands from getting burned!  Insul-Bright is a insulated lining that is used inside fabric to keep items hot or cool.  It's used to make pot holders, casserole carriers, and grocery bags to name a few!  You can buy Insul-Bright at any fabric store. 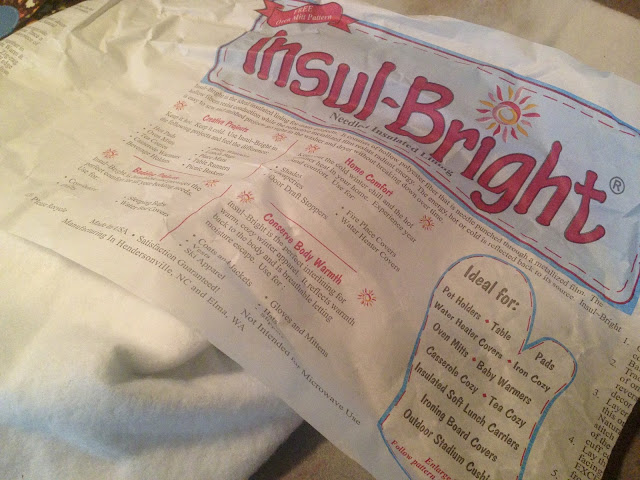 I cut one piece of Insul-Bright to fit inside my pot holder, then I basted the three pieces together. 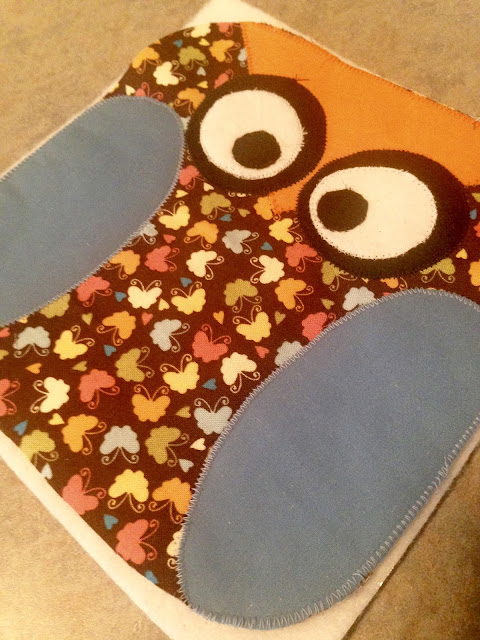 Now for the hardest part, finishing the edges.  To do this you will need bias tape.  You can buy bias tape or make your own.  I made my own because I have a lot of fabric and I did not have the size or color of bias tape I needed in my stash.  Even though making bias tape is pretty easy, it's even easier to buy it, so I recommend that!

I won't get into how I made my bias tape, for that's a whole other tutorial.  There are plenty of YouTube videos and other tutorials on the Internet of how to make bias tape if you need to make your own.  Just remember, the key is to "cut on the bias", that's why it's called bias tape.  Even though I've made bias tape before, I forgot how to do it and ended up cutting it wrong.  When I went to put it on my pot holder, it didn't work because the material didn't stretch.  Bias tape has to stretch or it does not work for rounding the corners of the pot holder. 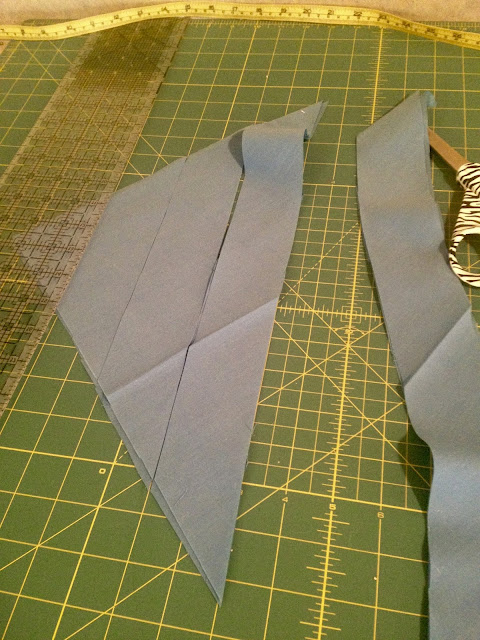 Once my bias tape was cut properly, it went on fairly easy.  I pinned the bias tape in place like this. In hindsight, I should have started my bias tape in the top center because the seam would have been covered up by the holder. 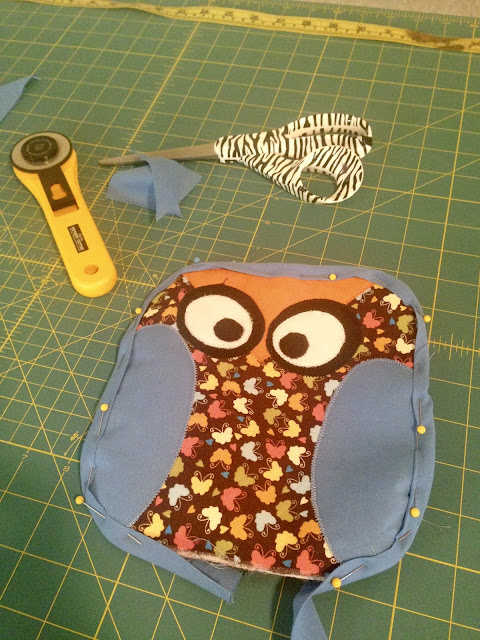 To get a finished edge, tuck one of the bias tape under the other end. 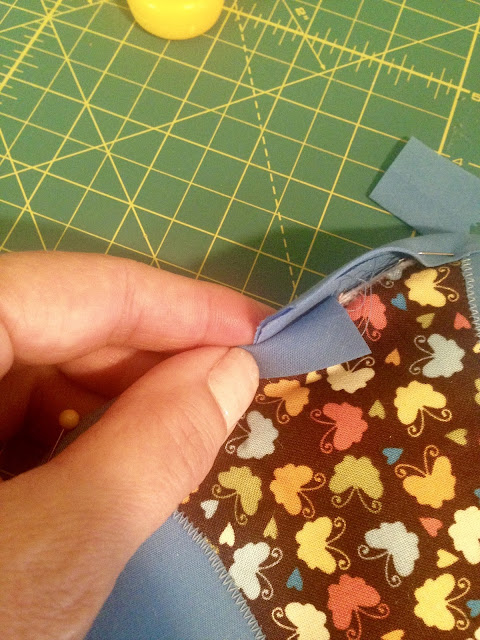 Then fold over the edge of the other end and pin it on top of the tucked in end. 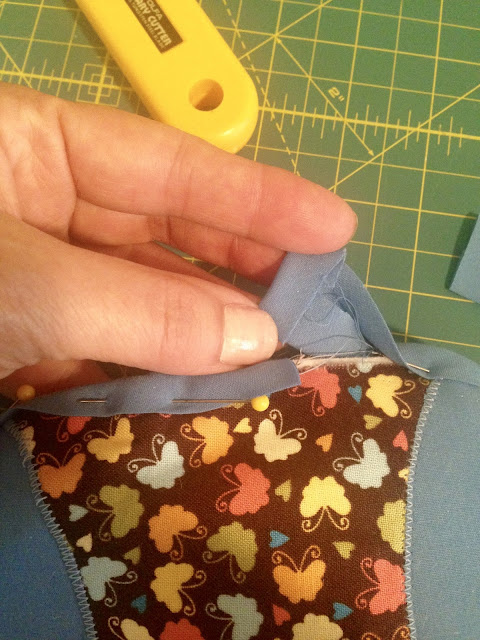 Once it is all pinned, just sew close to the edges.

If you want a holder, just cut a smaller piece of bias tape, fold the edges under, and sew to the top of your holder. 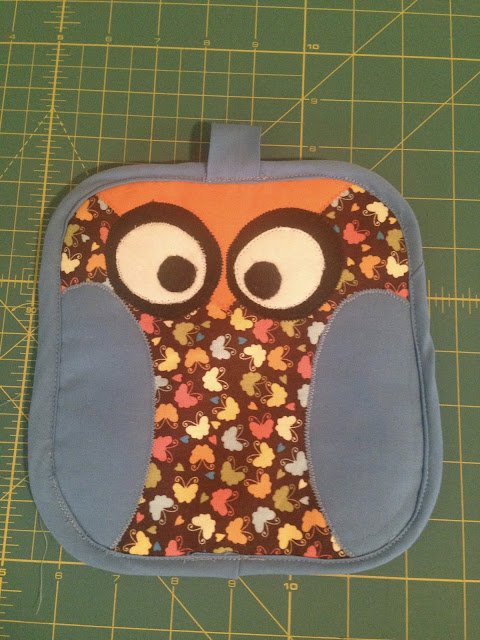 So what do you think, pretty cute eh? But I have to admit, it was a lot of work for a pot holder, especially considering how dirty they get.  However, I enjoyed doing it and I saved myself money because everything I used to make it was already in my stash.

I do plan on making more pot holders.  I was thinking of making some fall or Halloween ones.  I have so much fall fabric!  But maybe, I'll just keep it simple and just do a standard square.