The Early August Garden and My Back Porch

In the early August garden, the annuals and tall perennial phlox and Black Eyed Susan's steal the show.  By now, all the annuals have gotten enough warmth and sunshine to be at full peak.

I've always loved ferns, and I can grow them great outside, but inside they always die on me.  And I've tried all the suggestions:  misting the leaves several times a day, putting a humidifier on, putting them in the bathroom, putting a tray of water underneath them, yada, yada, yada.  Nothing works. They always die.  Last year I bought three hanging ferns and they did great outside.  Then I brought them inside for the winter.  They looked fairly well until after Thanksgiving, then they slowly started to die.  By March, there were almost no fronds left.   When it was finally warm enough to put them outside, one of them looked completely dead so I tossed it.  But the other two had at least two fronds left, so I cut all the bad icky stuff off, replanted them into  moss covered baskets, and hung them up outside hoping for the best.  For awhile, I was going to toss them.  They were quite embarrassing looking as they were hanging on my north porch where all the visitors enter.  I thought of buying new shade baskets and moving them to the back of the house where no would see them.  But, I never got around to it.  And it was a good thing I didn't, because a month or so later they grew into this: 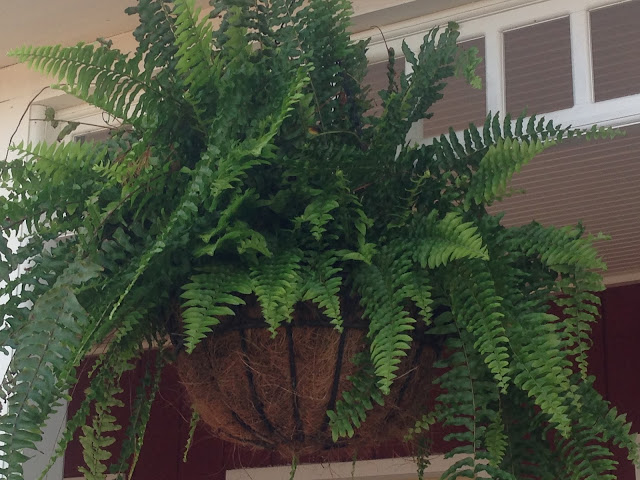 What a miracle!  If there was a ever a time I wished for a before and after picture, this would be it.  I'm so happy I didn't toss these ferns, and I even wish I wouldn't have tossed the other one because maybe it would have grown into this too!

If you follow me on Instagram you may recognize this picture.  I captured this cute little bee on my hollyhock. 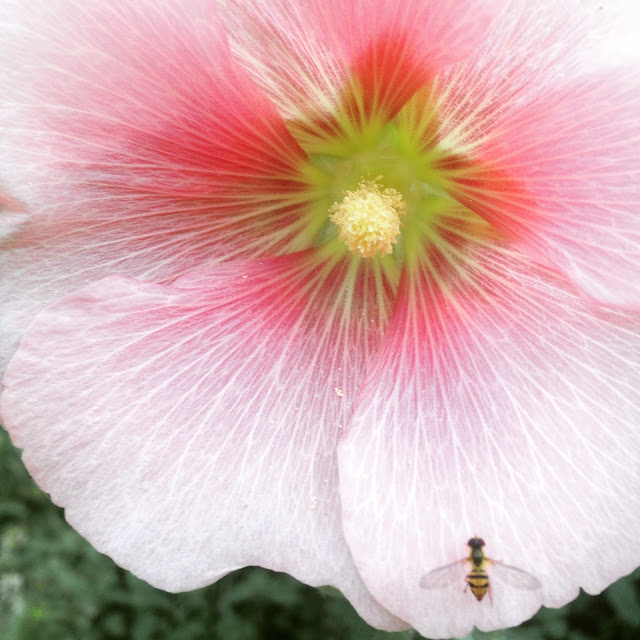 Last week I showed you my front porch, but I didn't have a close up of my wall planter in that post.  So since the impatiens finally bloomed, I snapped a picture.  The other flowers are what is left over of the spring pansies, and a vine I just dug up from my garden and put in the planter. 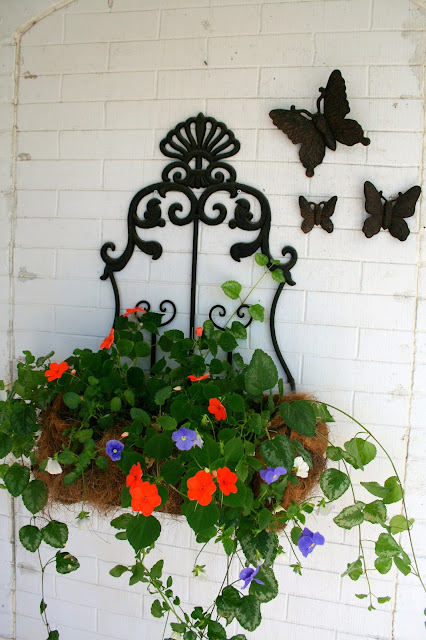 The west side of my house is where I always like to plant my sun annuals.  I've tried various plants, but the ones that grow the best here are tall red salvia's.  Only one nursery in my town sells these plants, everyone else sells the common low red salvia.  I make a special trip every spring to this nursery just for this plant.

The same ivy you saw in the planter in the picture above, is planted in front of the strawflower.  There are also a few purple petunias growing back that the deer haven't gotten to…yet. 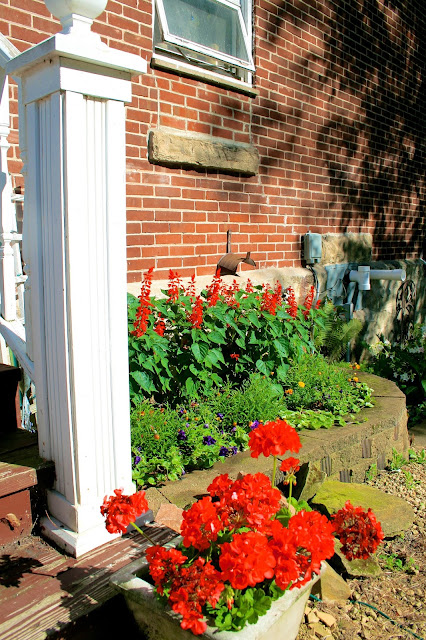 My geraniums are blowing my mind this year….they have so many big, luscious blooms.  They are actually a coral color, but they look very red in this picture.  I think they did so well because of the deer.  Every time they were about to bloom, the deer ate the buds.  But eventually the deer left them alone, (they probably moved into the farm fields now to eat the corn) and they really filled out. 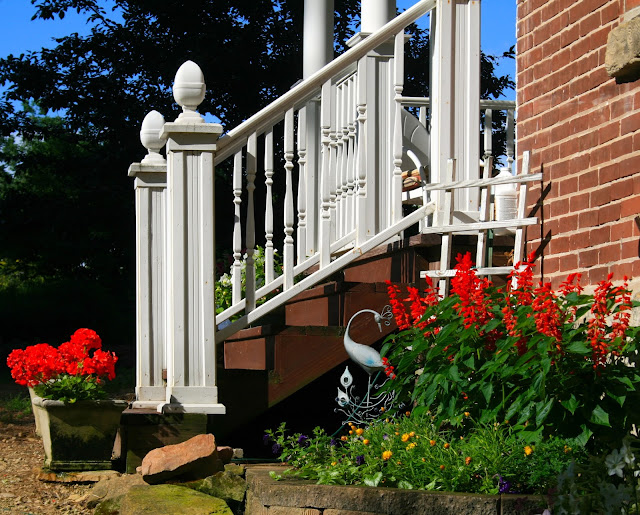 As I stated in my first paragraph, the phlox are stealing the show in the garden.  I tried to take some far away shots, but they looked like purple dots in a sea of green, so I went back to my close ups. 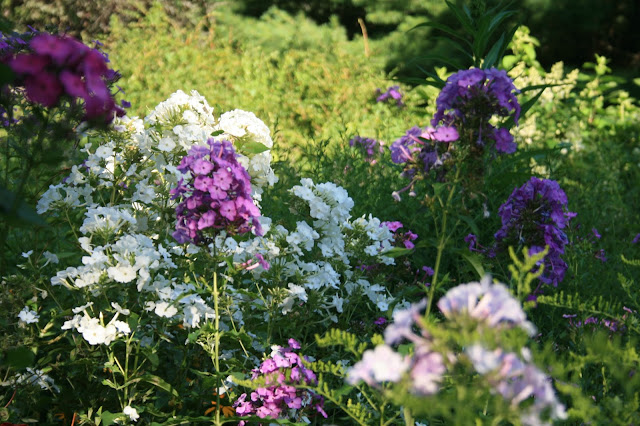 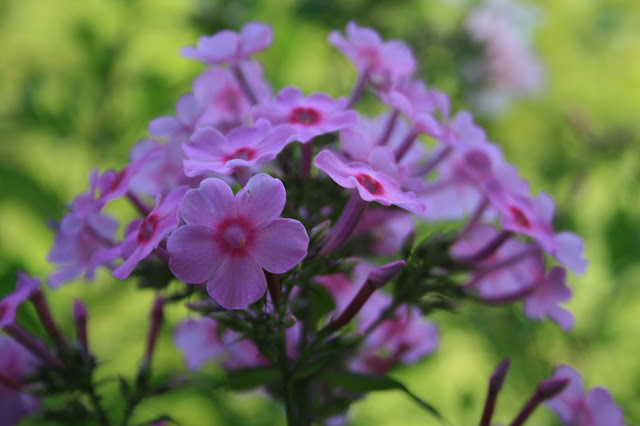 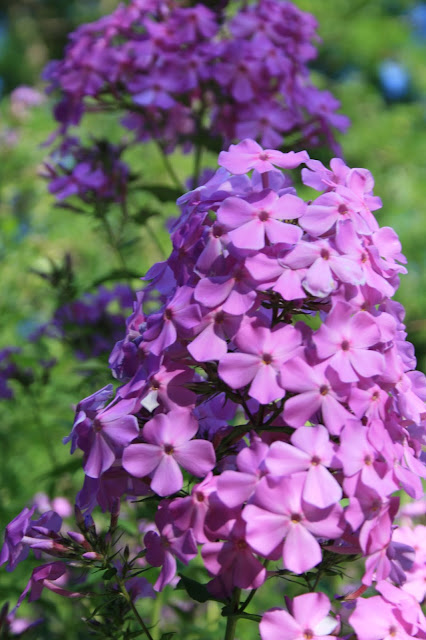 The very last Viburnum bush is budding and starting to bloom.  This is a fall blooming Viburnum.  It's blooms will last well into fall, changing from white to a pale pink as they age.  They have a cone shape, which is different from most of the ball shaped Viburnums one usually sees. 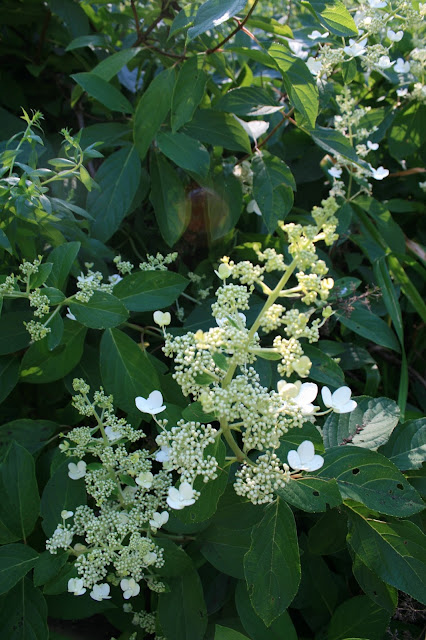 Some happy Black Eyed Susan's with a smattering of pink and wine colored day lilies. 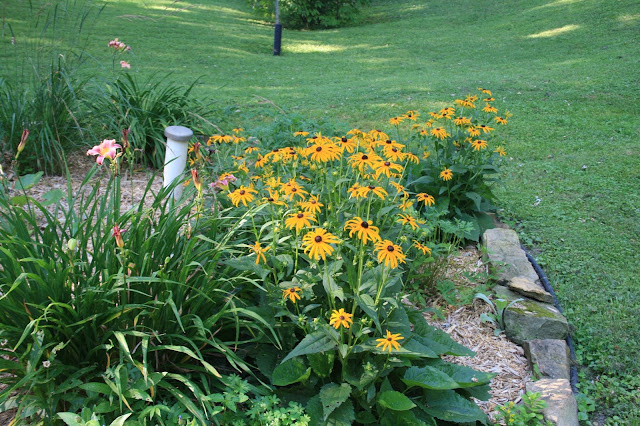 The Purple Liatris looks really happy with the orange and red day lilies, phlox, and ornamental grass.  Wouldn't you just love to sit on that garden bench and rest awhile? 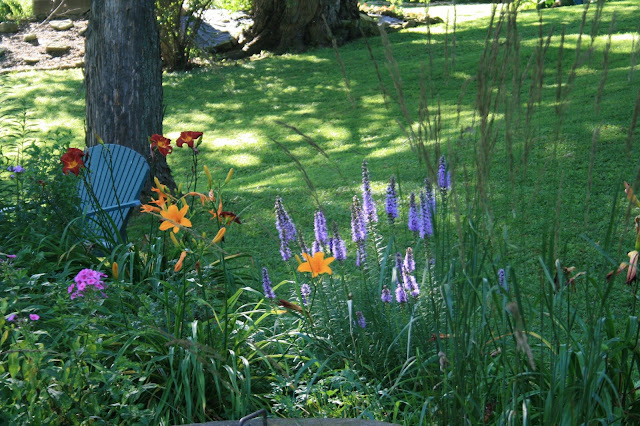 This is a wildflower that grows so tall it's hard to photograph.  It grows over seven feet tall, and I had to zoom my lens and raise up my arms to get a picture. 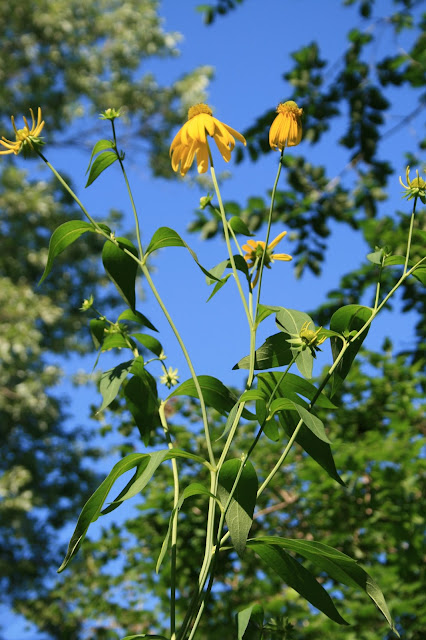 I did get one close up of one of it's pretty blooms. 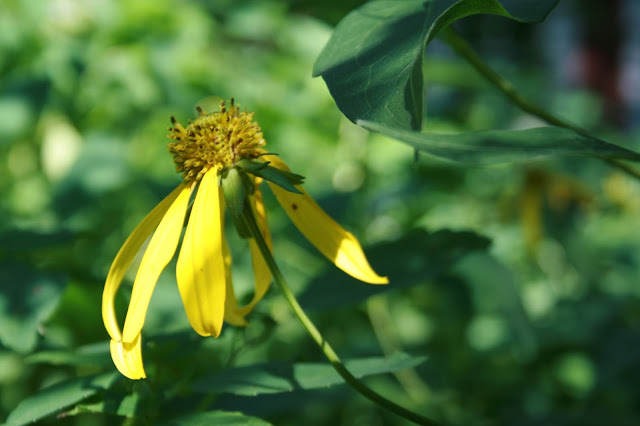 And now for my back porch.  Last week I showed you my front entry porch and my side porch, where most of my visitors enter.  This week I am showing you my back porch.  No one sees this porch, unless they come over to the house to visit.

We never sit on this porch, but we do take the fire pit you see in the picture, and put it on our brick patio that's in front of this porch, and sit around that a few summer nights. 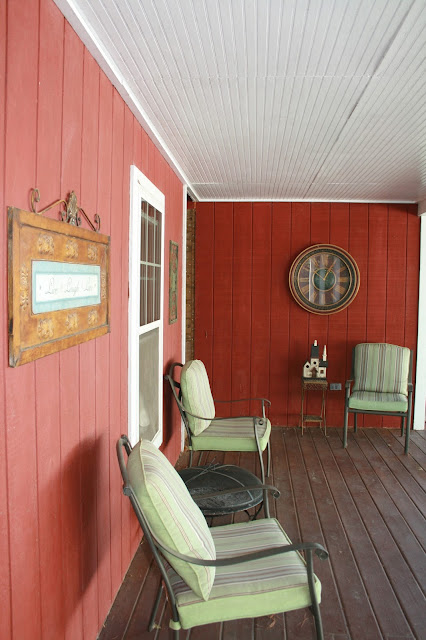 Because this porch is so protected I can hang a lot of wall hangings and not worry about them getting ruined. 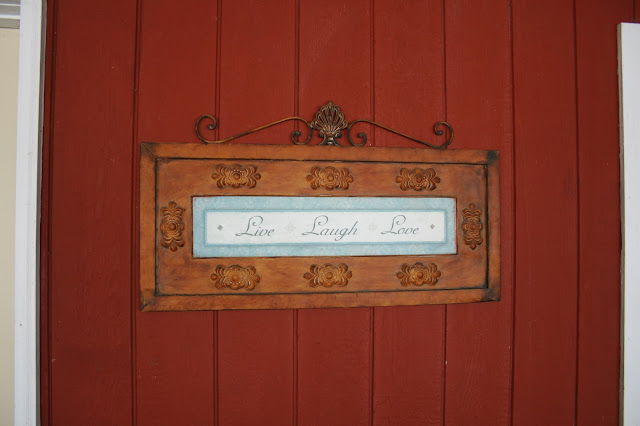 The furniture is wrought iron with cushions.  Then I have a mix of iron and wicker tables holding plants and bird houses. 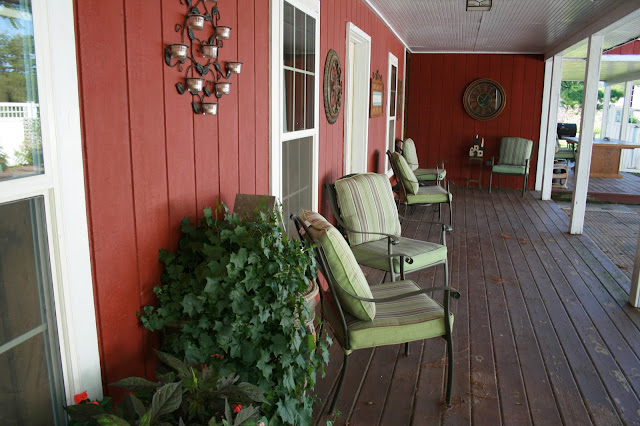 The urn is a mix of impatiens and an ivy.  I will bring this plant inside for the winter.  The impatiens will most likely die, but the ivy will not. 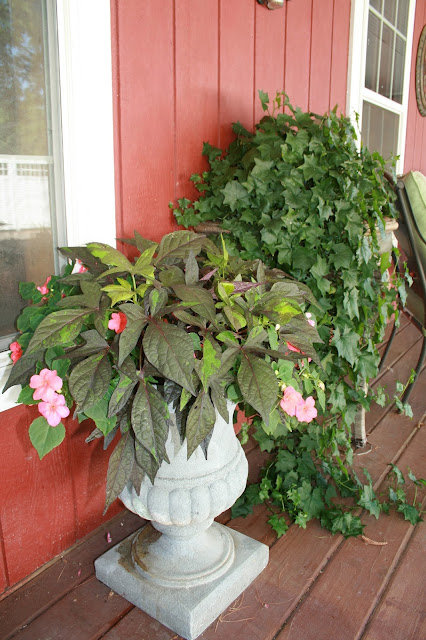 I have a lantern that holds a candle inside hanging from the ceiling.  I thought it was interesting that the birds put sticks inside of it. 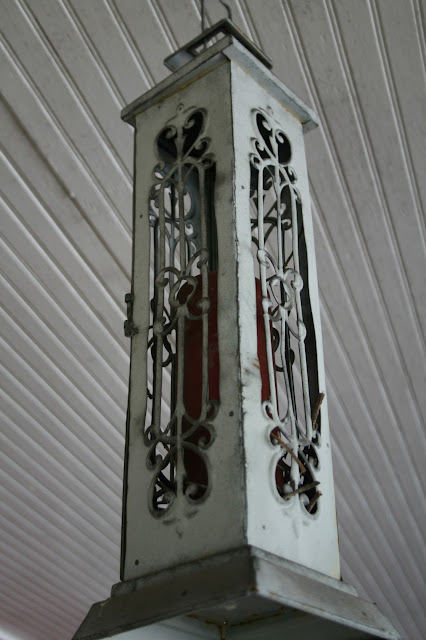 Even though we don't sit outside on this porch, we do eat out here at least once a week, if not more.  My husband built the table himself.  It's made of wood and tile. 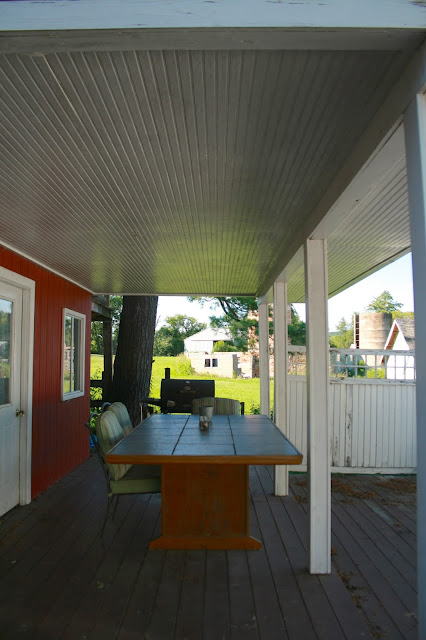 The clock is an indoor clock that stopped working years ago.  I thought it was still pretty, even if it didn't work, so I just hung it on the wall outside. 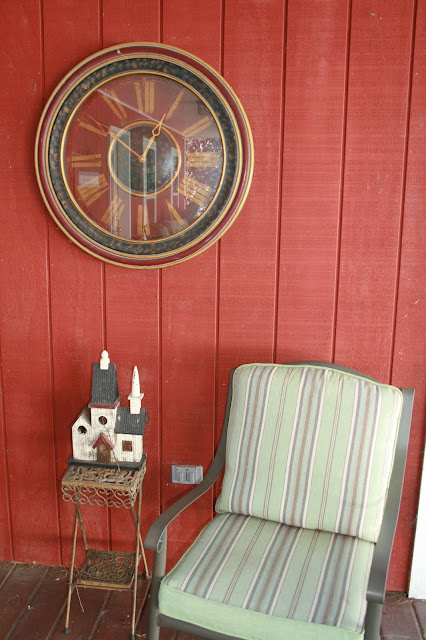 This wall hanging holds candles that we light if we have company at night.  Below it is an ivy that looks like it is taking over the table.  I don't want to cut it, because it's actually a house plant that I brought outside for the summer.  It's normal home is a shelf that hangs above eight feet above the floor in our sun room.  The ivy drapes beautifully down the wall and across the shelf, which I love, so I don't want to cut it back. 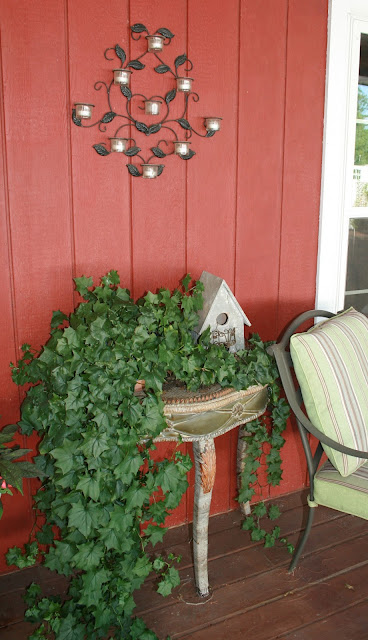 And that is a little tour of my early August garden and back porch.  Next week I will be in Florida, so I won't be able to do a garden post of my own yard, but I'm hoping to see lots of gorgeous tropical plants and gardens to share with you instead.