This is a continuation of a travel series of a road trip I took to Las Vegas in May with my husband.  To start at the beginning read THIS POST.    Here are the rest of this travel series posts in chronological order:

Dinosaur Hill, Fruita Colorado
Scenic 1-70 West Drive
The Flamingo Hotel and The Vegas Strip
Day Two in Las Vegas
The Bellagio Gardens
A Bus Tour to the Hoover Dam and Grand Canyon West Rim
What To Do When Bad Things Happen When Your On Vacation

I am so behind on my travel posts I don't know if I'll ever catch up.  I have been traveling more than I have been able to write and then having computer issues and being unable to write for several weeks didn't help.  I fear at the rate I'm going I will be showing you summer vacation pictures and stories in the middle of winter, but I don't want to do more than one travel post a week as they require the most amount of work, so what's a girl to do?

Because of my dilemma, I was tempted to cover Arches National Park in one post, but it's such a huge park with so much to share, I just don't feel I could do it justice if I did that...so I won't.  Even though we only spent one day in Arches, I am going to split it up into multiple posts covering all the trails and sites we saw....because they were magnificent and I want my readers to see everything of this gorgeous, magical place!  First up:

Arches National Park was about a four and a half hour drive from our hotel in Cedar City.  By the time we arrived mid-morning in late May there was already a very long, long, long line of cars waiting to enter.  It costs $25.00 per car to enter with 15 passengers or less.  The pass is good for one week.  This is a very popular park, especially during the cooler times of the year.  So get there early to beat the crowds!  Parking in some of the hiking trail lots was difficult to find at times. 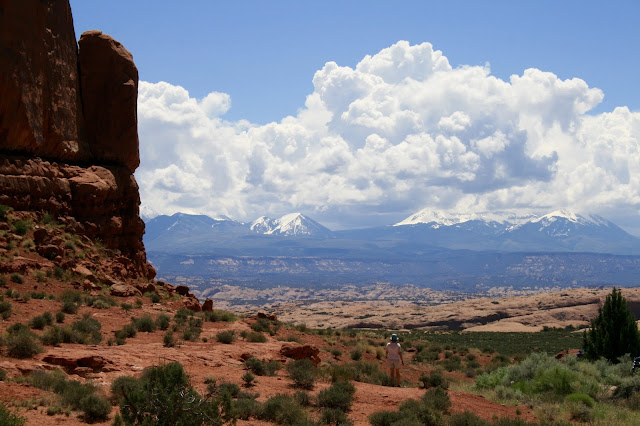 Park Avenue Trail...gotta love that name right?  It is the first trail when you enter the park and it is popular for it's monoliths.  Just like New York City's Park Avenue, this Park Avenue trail surrounds you with sky scrapers on either side...except God made them, not man! 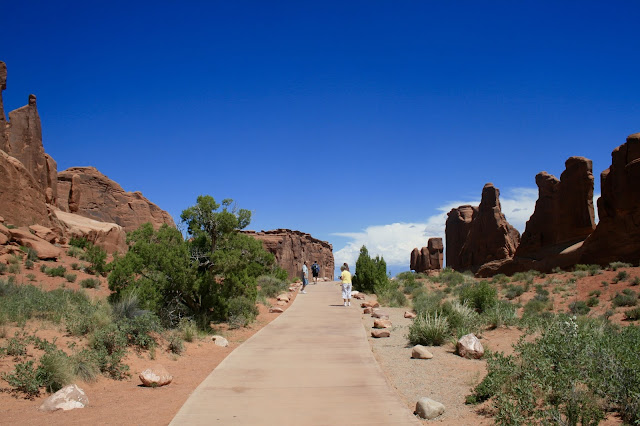 It is a one-mile, one way trail.  If you have more people in your party, someone could meet you at the end of the trail with a car so you don't have to walk the mile back.

At first glance, the trail seems pretty easy with a paved sidewalk, but it eventually turns into steep rocky steps and a natural path marked by cairns (small piles of rocks). 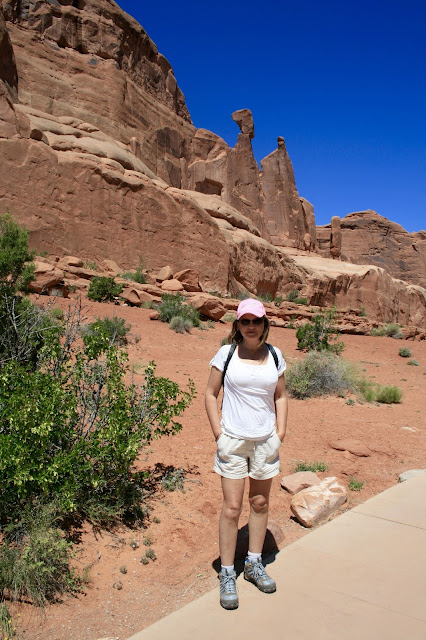 As a Midwesterner, these unique rock formations blew my mind.  I've never seen anything like them before and it felt like I discovered a different planet.  All the monoliths had names and hopefully I remembered them correctly.  If I'm wrong, I'm sure one of my readers will correct me.

I've included several pictures with people I don't know in them because I wanted to give you an idea of the scale of these rock formations.  In the picture below you see two people in the forefront, but do you also see the person walking on the trail in the center?  Yikes!  These formations are big!

If you have small children or elderly/handicapped people in your hiking party, you could stop right here, where the paved sidewalk ends and just enjoy this fabulous view where you can see all the monoliths at once.  But to really appreciate the depth and scale, you must hike down the trail, and you will be happy you did! 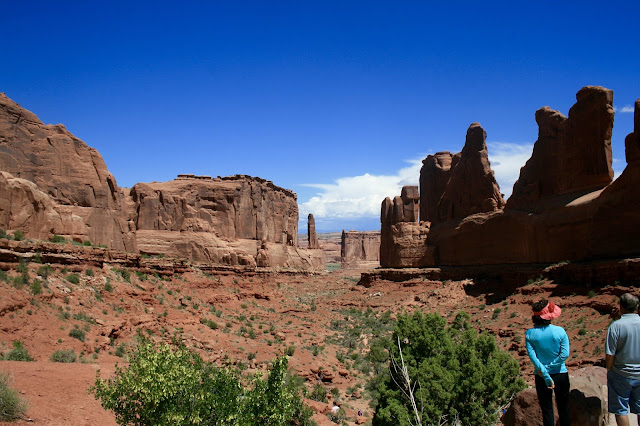 The desert heat is brutal.  Although we used mild sunscreen and wore hats and sunglasses, after being in the desert sun all day my husband and I both got the worst sunburns of our lives.  Never again will I ever walk in a desert without constantly slathering on the strongest sunblock I can find!  I thought I was safe because I already had a summer base tan, but I was not.  My Midwestern skin did not handle the desert sun very well at all. 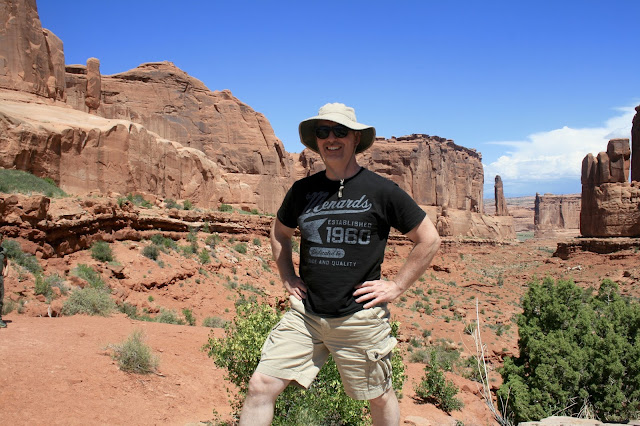 Here are the rock steps that take you down into the canyon. 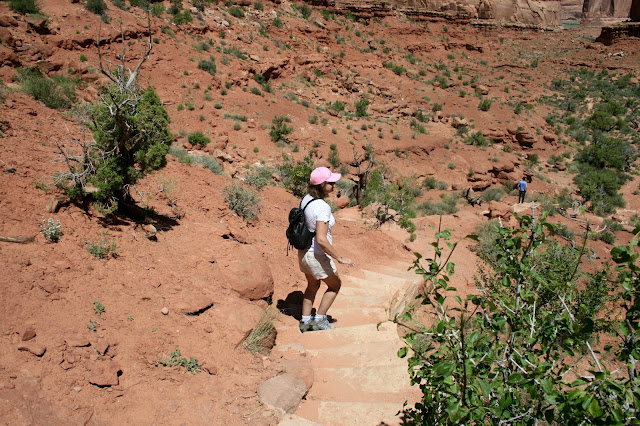 The shapes of all the monoliths remind one of an ancient city, perhaps that is why one is named Tower of Babel?

And again, to give you an idea of the scale of these monoliths, notice the people hiking on the trail.  They look like ants!  These are definitely natural skyscrapers! 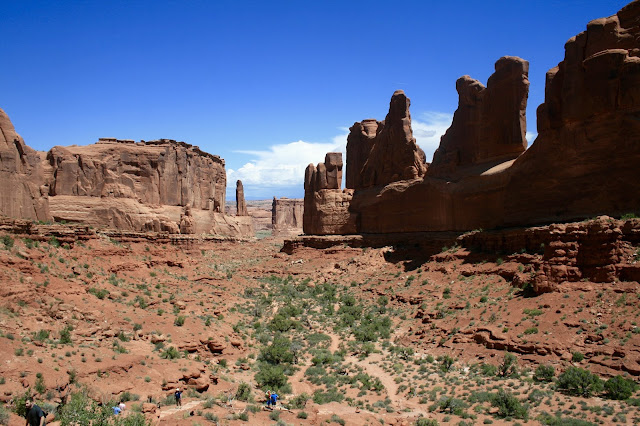 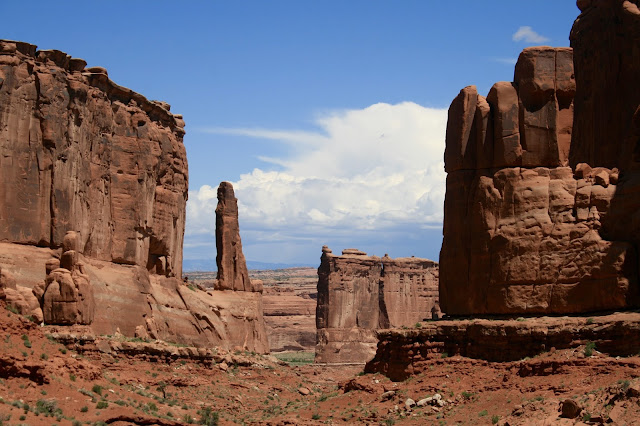 Close Up of the Tower of Babel 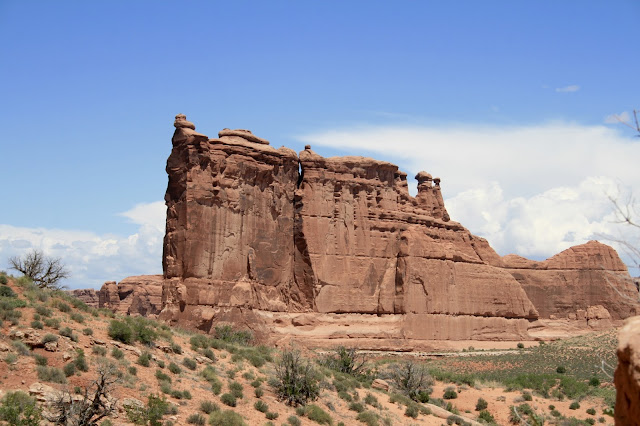 Close Up of The Three Gossips 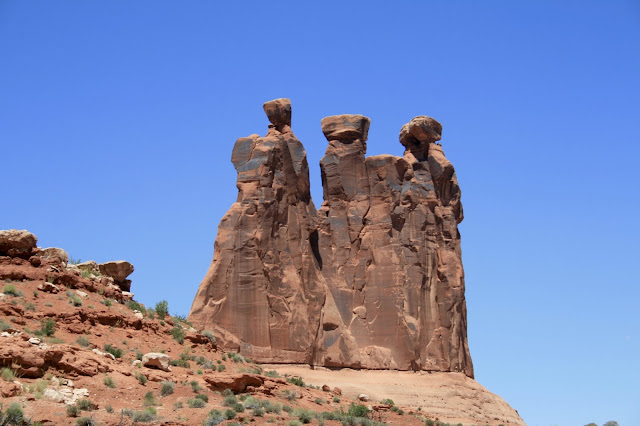 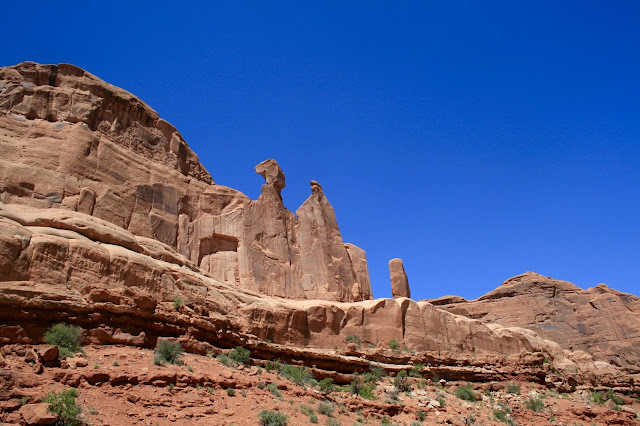 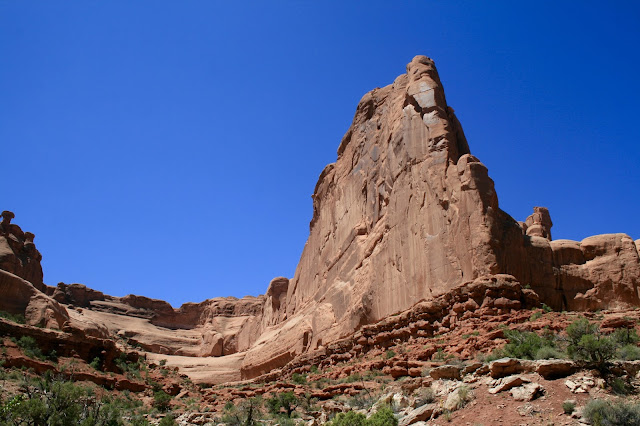 A cave we found in the side of the rock walls. 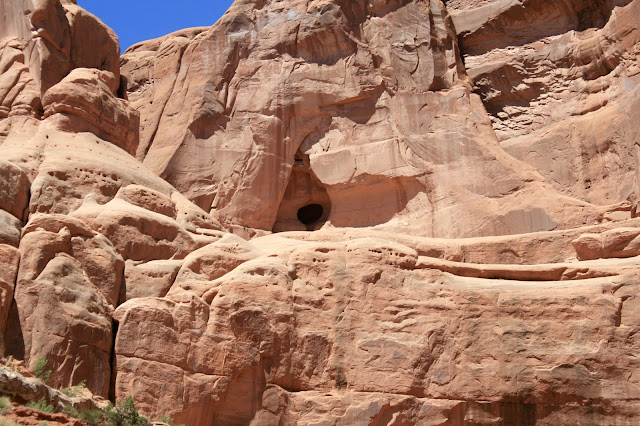 The picture below is of a smaller monolith called The Organ. 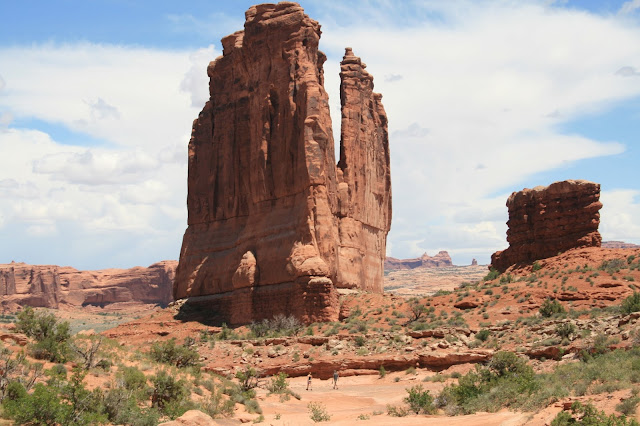 I loved this picture my husband took of the tree with the white cloud in the background.  Have you ever seen a bluer sky?  Trust me, this is what it looks like in real life.  These pictures are not altered! 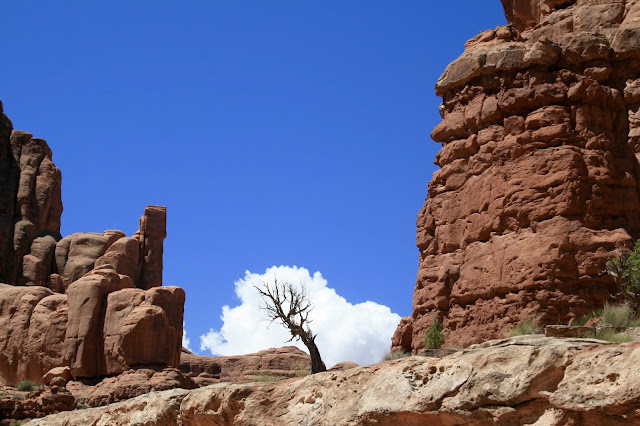 And in spite of all the desert heat and dry soil, beautiful flowers still bloom! 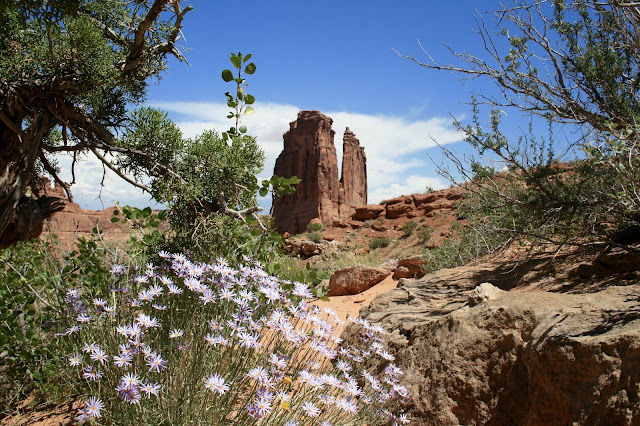 We never could find a name for the tall, single monolith you see in the background. 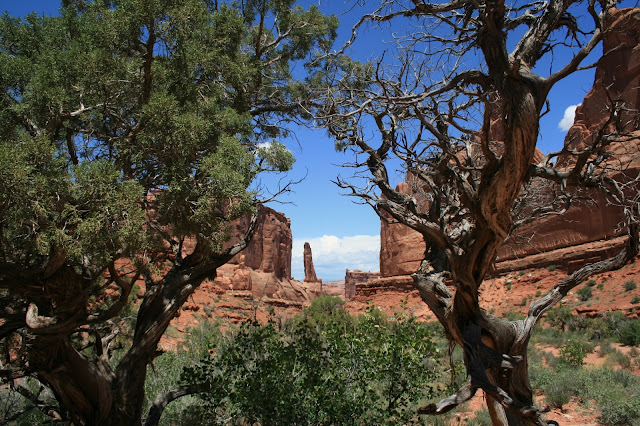 Even though the steep rocky steps might be difficult for some people, this is one of the easiest trails in the park to hike.  Just be sure to bring plenty of water and go to the bathroom beforehand, as there are no bathrooms located at this trail.

When we reached the end of the trail it was so peaceful as there were no other hikers around (for a minute at least), and we could hear the birds singing.  I did a very brief (45 seconds) video so you could hear these beautiful bird songs and I also panned the camera around a bit so you could see where all the monoliths are in relation to each other.