Well this weekend I did one of the most difficult things every parent has to do at some point in their life: dropped off my 'baby', my last born child at college. It was a difficult weekend. Jordan loves his home, his family, his neighborhood. He really didn't want to leave everyone, but he knows he can't stay here forever. He's very scared. It's not easy for him to make new friends. He's a lot like his mom that way. I don't have a lot of friends, but when I make a friend, they are a friend for life. And that's Jordan too. But, after today's chapel sermon, and yesterday's parent workshops, I know that Jordan is in the best school for him and that God is going to do a great work in his life. But I also know that for that work to occur, there will be a lot of pain, and I'm terribly worried about him, because I'm his mother and I want what all mother's want: for their children to be happy.

So, in honor of this weekend, I decided to share a page that my lovely daughter Ashley created for Jordan's High School Scrapbook called 'The High School Experience'. Jordan loves to write music. In fact, I would say that like some people like to write in a diary to express their emotions of what they are going through, Jordan writes songs. Very often during Jordan's difficult high school years I would 'snoop' (as all good mothers should) through his songbooks and read the lyrics he was writing. I could always tell what he was struggling with, what he was feeling, if he was in a good place or bad place by what he was writing about. Jordan spent hours on the piano a day, singing the lyrics to his own songs, so I really didn't have to snoop, because he always sang the songs on the issues he was dealing with at the moment. The page below is all about the song Jordan wrote called 'The High School Experience'. Although the lyrics to this song are so true for most high schooler's, I always chuckled when I heard him sing the chorus at the top of his lungs 'GET ME OUT OF HERE!'. Now that he is a Freshman in college, I'm sure he's wishing he's back in his small town High School again where everything was 'safe' and 'familiar'.

Here is the Scrap Book page in its entirety. Jordan had a friend take the shots of him at school and then he used the pics to make a CD cover. He's very gifted at that too! 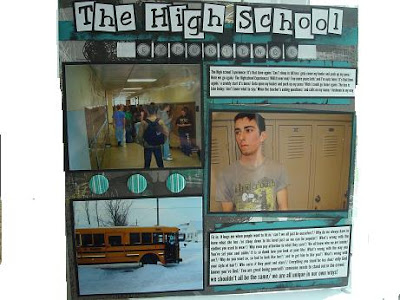 Here is the title of the song stamped with two different types of Alphabet Stamps and then cut out. One block of lyrics is directly beneath the title, the other block is on the bottom of the page. 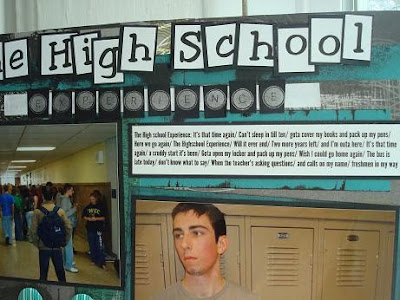 Here is a close up of some of the pictures. I believe the paper came out of the same 'Urban Youth' stack that I've been using FOREVER. Its just so Jordan, or so any teen. The three embellishments in between the photos are brads. 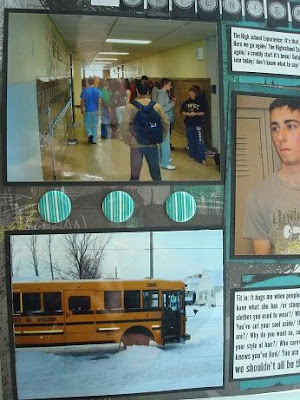 And finally, here is a close up of some of the lyrics. Pretty awesome aren't they? I hate to brag, but I have one really talented kid here. But, with that amazing creative talent, can come some challenging personality flaws. As I was telling his roommate today: Jordan is a musician, he feels things deeply and he can be very moody, so don't take anything he says or does too personally. His roommate just laughed and replied 'Both my brother's are musicians, so I know. Plus, I'm a theatre major so I can be moody too!'. And then I laughed. I think Jordan has a great roommate and I'm very thankful to God for that. 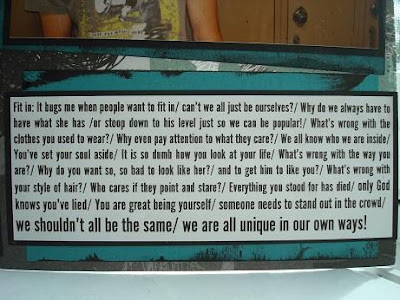 For the past 10 years I've had to deal with an Opera Singer, 2 pianists, and a Drummer living in my house. It has never been quiet, and it has constantly been filled with music. If one wasn't singing or playing the piano, the other one was. There were so many times I longed for 'peace and quiet'. Then on Saturday as Jordan's father was loading the car, and I was upstairs putting the finishing touches of my make up on, Jordan, as usual, sat down and played the piano and sang as he was waiting to leave. A lump came in my throat, and I thought 'Thats the last time I will hear that piano played for at least six weeks. It will no longer be used to play beautiful music, or notes plunked on it for hours while a song is being created, or the keys slammed in frustration because no matter how many times a song is practised it can't be perfect, or, used to soothe an anguished soul trying to find his place in this life. It will now just be silent. A piece of furniture to gather dust. It was such a sad thought.

Well thanks for letting me have a little 'brag' moment about my son and to share my pathetic, yet completely normal feelings. And, if your a believer, say a little prayer for him if you can. He could use all the support he can get right now!
Have a great day! Amy