I said a few posts ago that with both my daughter's wedding in June, and my son's high school graduation in May, that I may not have time to finish my son's high school scrap book in time for his graduation. A few of you made me feel guilty about that, and said that I really must make it a priority. I agree. So I decided I would make a minimum of at least one page per week, and hopefully, it will be done for his graduation party.

My son is 18 and is a percussionist. Music is his dream, and he hopes to make a career out of it someday. Since music occupies 75% of his life, most of the scrap book pages I will show you, will probably involve music. Here is a page I made showing his love for Rock Music. I used my all time favorite designer paper for teen boys and young men called 'Urban Youth'. I don't know if they even sell it anymore. I bought it about a year ago, and its such a thick, thick stack, that even though I use it all the time, I have barely put a dent in it. It just has such cool graphics that boys love. The pictures are of Jordan in front of his drum set, showing some music he wrote and acting like a 'cool rock dude'. He tends to do that a lot. LOL! 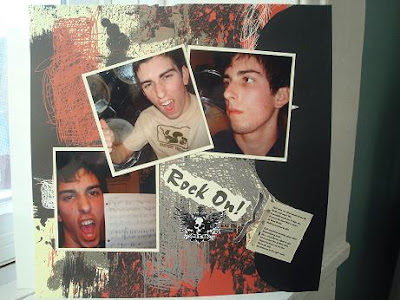 I created the sentiment using a computer. The skull is from Inkadinkado. I stamped and embossed the image in black embossing powder and then cut it out. 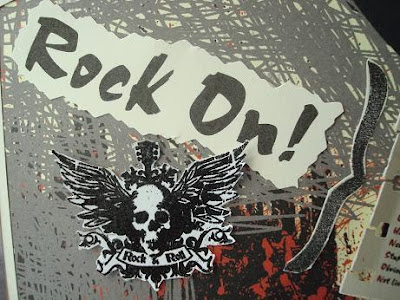 I forget what you call this 'poem'. The first letter of every sentence is part of the letters in his name. Jordan had to write this for a school project. I reprinted it using my computer so I could make it really small. I used a Stampin Up! Spiral Punch for the edge. 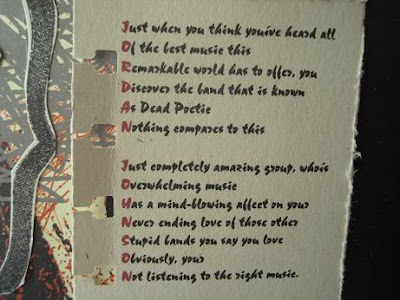 Well, Inventory at work was really interesting. I understand now why they had us 'watch' the people doing the inventory. They did make a few errors. I caught one guy who was just scanning bolts of trim and not measuring them. My boss was so proud of me for catching that! That could have been a disaster! Our store looks like a tornado went through it. They certainly did not put things back in the same condition in which they found it. It'll probably take two weeks of work to clean things up. But, at least the worst is over, and maybe now I won't have to work so many hours and can get more work done on my daughter's wedding.
Have a great day! Amy