On a Testosterone High

No, I'm not going through menopause, although I wish I were because my little monthly visitor is becoming a pain in the butt. I just have about three male birthdays this week, and you all know how I LOVE (sarcasm here) to make masculine cards, so I decided to catch up on some old sketch challenges and knock them all out in one day.

The first one, I think I actually like. I used SC 261 from SCS. The paper is called 'Urban Youth" by 'Me and My Big Ideas'. I just love this stack. First of all its a HUGE stack, so you really get your money's worth, and secondly, the paper is just perfect for boys, teens, and even college age like my son. The image is Stampin Up! 'Extreme Dirt Bike' and the sentiment is from MFT's 'The Poppies'. Card Stock Colors are Naturals Ivory, Sahara Sand, Really Rust, Basic Grey and Black. 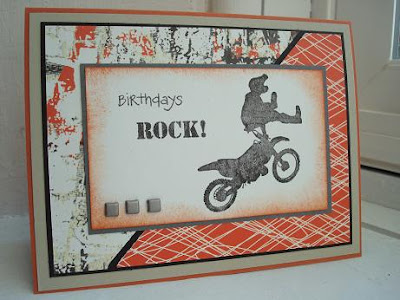 My second card is for a boy that loves horses. I used SC262 from SCS. The image is Stampin Up! 'Bronc Buster'. The paper is from DCWV 'All About Boys'. Card Stock Colors are Creamy Caramel, Naturals Ivory, and Close to Cocoa. The hemp ric rac and boot button are from JoAnn's. 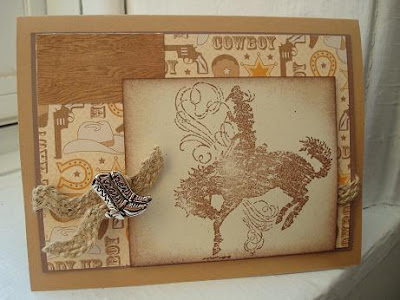 And this card, I really don't like at all, but for some reason a lot of people 'favored' it on SCS. I think people really like ideas for simple cards that they can do themselves quickly and easily, and that's why they favored it. Its so funny to me what cards of mine get 'favored' and what one's don't. Most often, the cards I like the most don't get favored. Probably because they are too complicated. Anyway, I used this week's Sketch Challenge on SCS, the image is Stampin Up! 'On the Fly', and the paper is Stampin UP! 'Parisian Breeze', Close to Cocoa, and Bordering Blue. 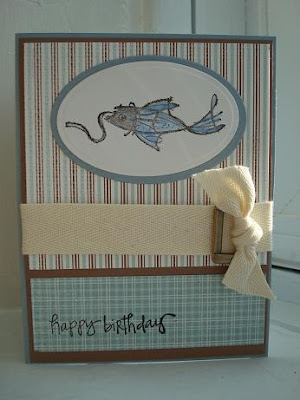 Well I hope I haven't bored you with all my testosterone filled cards. I know I don't like to look at boring, old, masculine cards, so why should you? LOL! Have a great day! Amy