If you noticed I've been away from my blog for awhile, it's because I have.  I have been on vacation.  We went to spend Easter weekend with the kids and grandkids, and from there we drove to Shenandoah National Park.
Now, if you're like everyone else, the first thing you will say is "Where is Shenandoah National Park?"  Every time I told someone where I was going on vacation, they would ask that question.  I don't think I've met a single person who knew where it was or even heard of it.  And to be perfect honest, I never heard of it before either.  I was reading a blog from another reader who lives in New Jersey, and that is where I first saw it.  I then looked it up on the map and saw it was only about nine hours from my daughter's house, which is an easy days drive, so I thought it would be a good trip when we were in her neck of the woods.
Shenandoah is in the beautiful state of Virginia about 75 miles from that den of inequity people like to refer to as Washington DC.  I must admit every time my husband and I looked at a map and saw how close the park was to DC we got shivers up our spine.  But we braved it out, and to our surprise Virginia was filled with people who were freedom loving Americans who thought and lived just like us...so we LOVED it!
We left for the park on a Monday with the plan of hiking a full four days in the park until we returned home.  But to our surprise, Virginia had a freak winter storm and the park was closed for two days.  I've never experienced a park that closed due to weather before, and here is the reason why:  the park is actually high top of a mountain.  There is one road that goes for 105 miles on top of this mountain range, so if there is bad weather, they close the park. 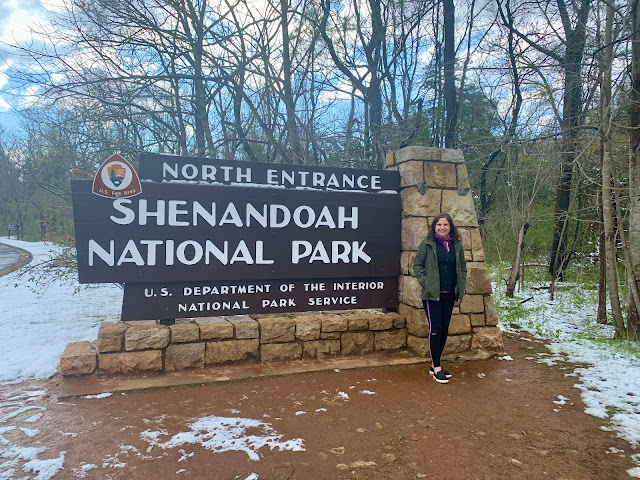 We were so disappointed they wouldn't let us drive into the park, but we saw there was a trail that started just outside the park called "Dickey Ridge Trail" so we decided to make the best of it and hike that while we waited for the park to reopen. 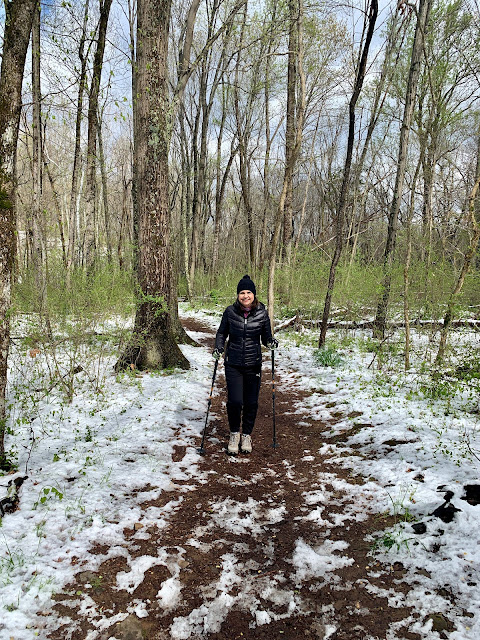 It was a beautiful wooded trail that went through a forest and ran along a stream.  We were in lower elevations at this point, so there wasn't much snow and ice YET.  The trail is actually quite complicated for there are several options to hike it ranging from a five mile gentle loop to an eighteen mile ridge hike.  Initially we planned on taking the loop, but somehow made it five miles up to the Dicky Ridge Visitor Center (I'm sure the snow on the ground covered the trail and that's how we missed the loop). 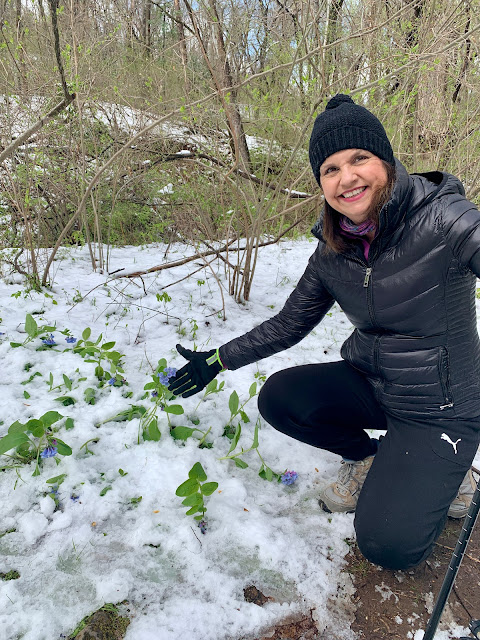 Of all the trails we hiked while in Shenandoah National Park, this was the only trail where we saw Blue Bells.  I couldn't believe they were still blooming through the snow and ice.  After this picture was taken, I saw an even larger field of Blue Bells higher up the mountain. 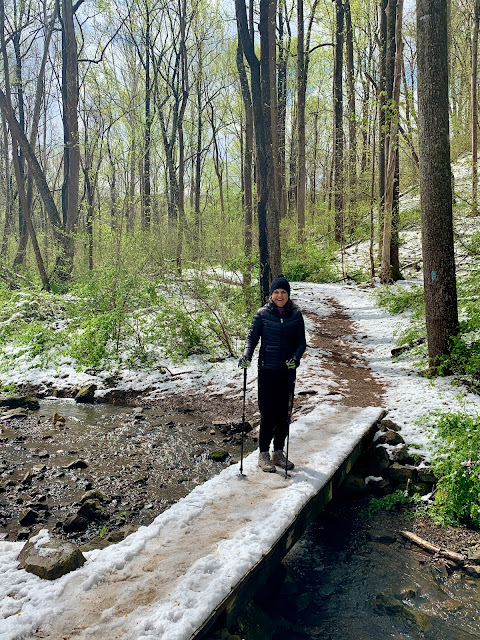 This bridge was completely covered in snow and ice when we started our hike, but on the return trip it was already all gone.  I know it looks freezing in the photos, but it was actually a beautiful, sunny day.  I think that was why so many people were surprised that Skyline Drive (the name of the 105 mile road through the park) was still closed. 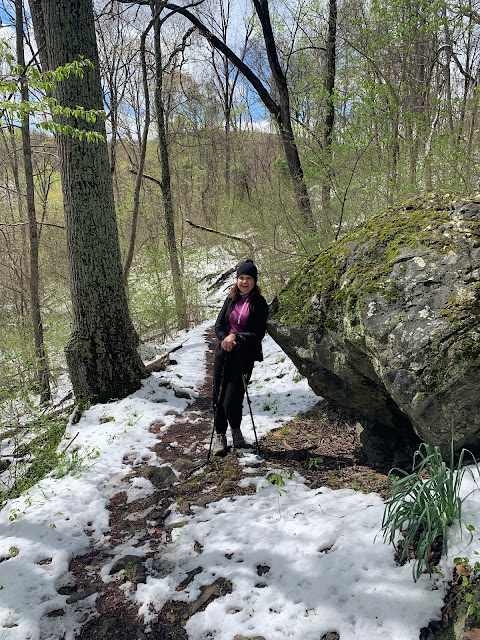 We really loved this trail.  After walking along the creek for awhile it gains in elevation and you can start seeing the mountains! 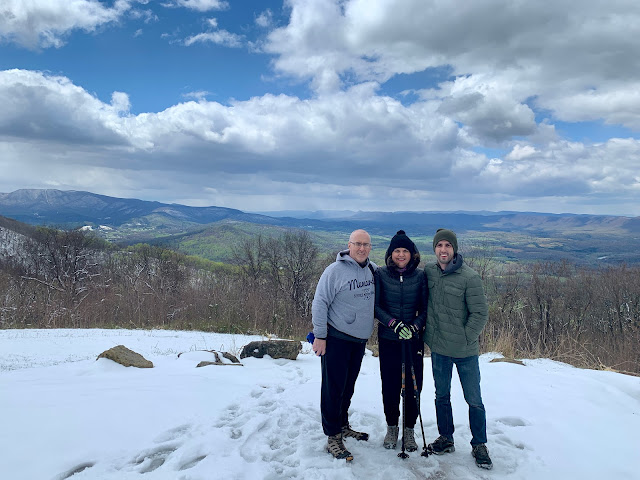 We hiked all the way up to the Dickey Ridge Visitor Center which was five miles from the start of the hike.  Now up here at 3, 530 feet it was cold, with a sharp, bone-chilling strong wind.  But oh my goodness the view!  It was incredible and so worth the five mile climb to get here. 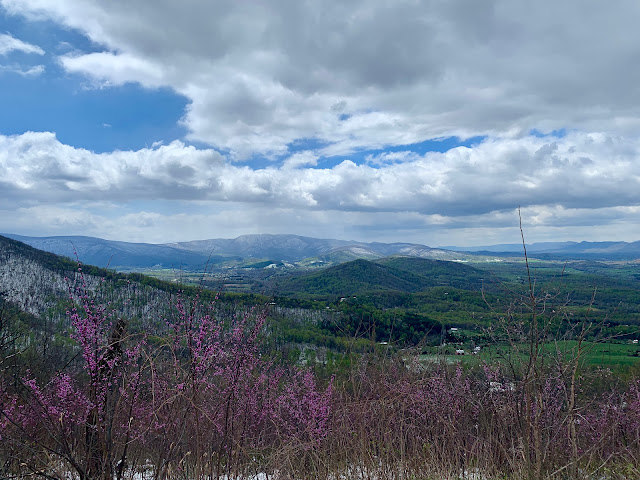 We decided to walk the Skyline Drive partially back so we didn't have to hike in the slushy snow.  As soon as it dropped elevation a bit, it got warmer, and we were treated to even more spectacular views.  This view is called the "Shenandoah Valley Overlook". 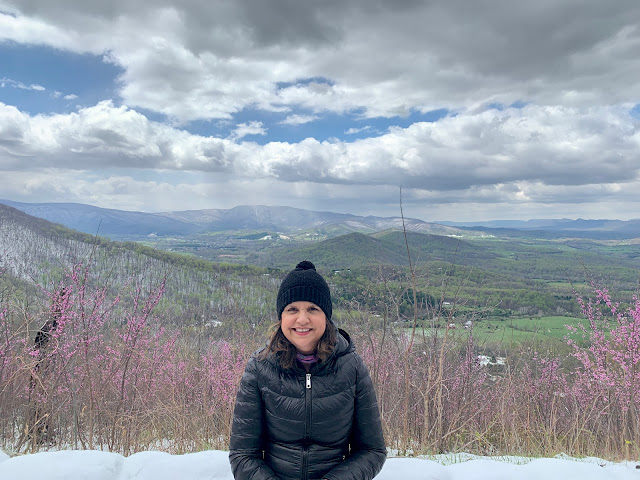 It was amazing to me to be "up in winter wonderland" and look down at the lush green valley below where it was in the upper fifties. 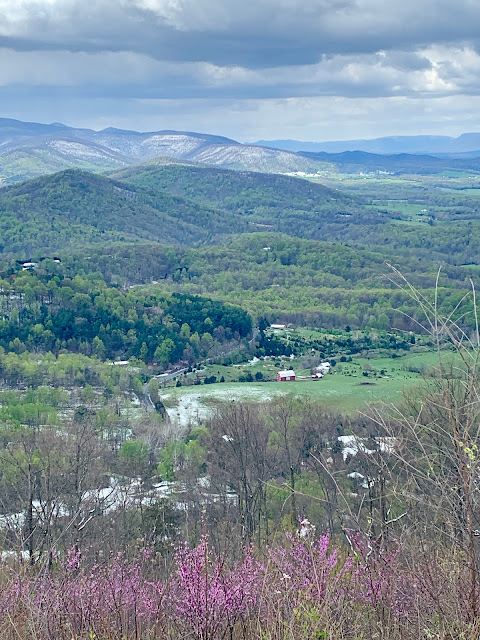 We always love to head east in spring to see these purple flowering trees.  They are everywhere out east and down south.  We don't have them in Wisconsin, but I sure wish we did. 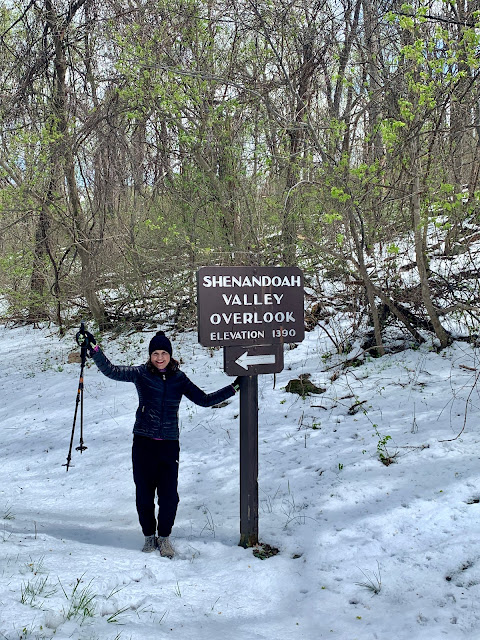 By the time we made it back to our car, we had hiked ten miles and we really felt it!  I couldn't believe we hiked ten miles in a single day!  We didn't get to hike the trail we planned on hiking on day one (Piney Branch Trail Loop) but we made the best of it and had fun on another trail instead.  And I never would have seen Virginia Blue Bells if I didn't hike this trail.  Vacations don't always go as planned, and you quite often have to just alter things and make the best of it.
The park did reopen the next day, and we were back on schedule!  I'll share more hiking adventures at Shenandoah National Park next week!
Have a Great Day! Amy
Linking Up with these Fabulous Blogs HERE!
Posted by Amy Johnson at 12:00:00 AM