On Day 5 after we spent six hours hiking to the top of Black Elk Peak and back we went back to our hotel to rest awhile, shower, change and get a nice dinner.  At night we went to see the Crazy Horse Memorial, which was located only a few miles from our hotel.

Now a lot of people told us not to waste our time here, but we went anyway because they had a special "Night Blast" (which is only done twice a year, and we just happened to be there that weekend), and a "Light Laser Show".  And you know what, I'm so happy we didn't listen to the naysayers because we not only had a wonderful time but we were so moved by the generosity of the Ziolkowski family and all they have done to memorialize Crazy Horse and the Lakota Tribe.

The Crazy Horse Memorial does not accept any government funding, all the work is done through private contributions and the funds raised at the memorial.  So it is worth going just to help financially support them alone.  Because it doesn't accept government funding, it is more costly than Mt. Rushmore.  They charge for how many people are in your car:  1 person is $12.00, 2 people is $24.00, 3 or more people is $30.00.  Admission covers parking, admission to the museums, and the viewing deck.  If you want to get closer to the sculpture you have to pay extra.  They have vans that will drive you up closer to the monument.  Those are $4.00 per person and they are only available late in the afternoon or on weekends when they are not working on the monument. 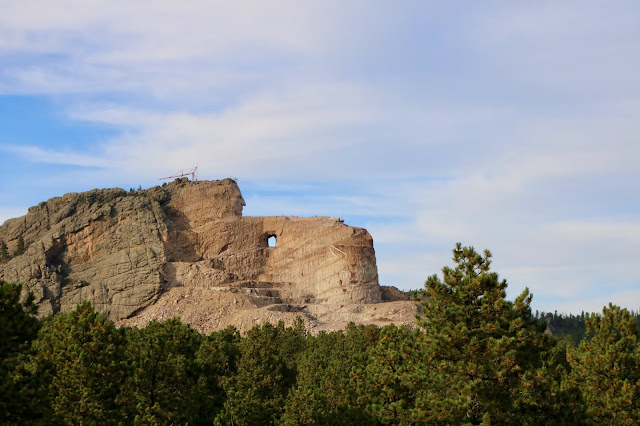 You actually can see the Crazy Horse Memorial right from the highway and never pay to get inside.  However, I don't know if they'll let you pull over on the highway and take a few pictures, plus the admission cost is for charity, so why not go in and support this worthy cost?

The Memorial has a beautiful museum called "The Indian Museum Of North America".  It is home to large collection of art and artifacts of over 300 Native American tribes.  Unfortunately we didn't spend much time in the museum because we got there late and needed to save a seat for the Laser Light Show.  They have limited benches, so we grabbed a spot and my husband and I took turns looking around while the other saved our seats.

The compound also has a nice restaurant and a beautiful gift shop. 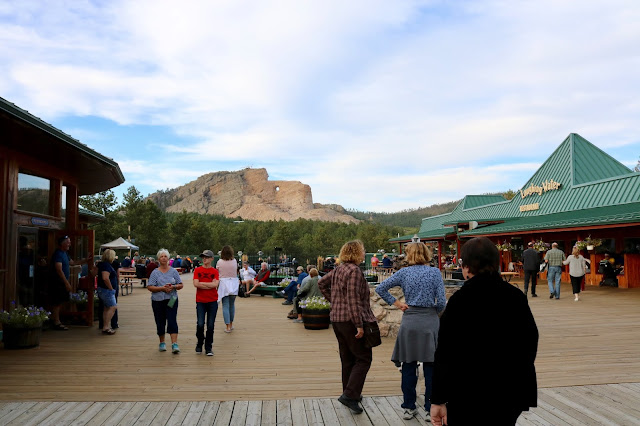 When you first enter the museum the employees direct you to a movie theater where you learn all about Crazy Horse and the history of the monument.  I was moved to tears multiple times hearing of the dedication and the sacrifices of the Ziolkowski family to create this monument to honor the Lakota Tribe.  Sculptor Korczak Ziolkowski arrived in the Black Hills in 1947 and worked on the monument until his death in 1982 at the age of 74.  He never took a paycheck for his work on the monument, and he had 10 children!  He said "By Carving Crazy Horse, if I can give back to the Indian some of his pride and create a means to keep alive his culture and heritage, my life will have been worthwhile."  How many people do you know would work so hard for no money and for such a reason;  especially if they had ten children!

If you don't pay the extra $4.00 dollars for the van ride, this is as close as you can get to the monument.  They do have viewing lenses you can look through too for a few quarters. 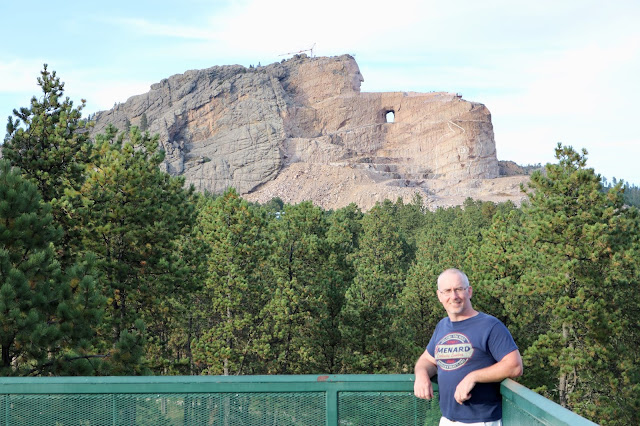 The monument memorializes the Native American Tasunke Witco.  He led a band of Lakota warriors against Custer's Seventh U.S. Cavalry Battalion in 1876.   This battle is known as "The Battle of Little Bighorn" or "Custer's Last Stand".   Without his successful leadership, the battle would have been much different.  Crazy Horse died in 1877 when he went to Ft. Robinson Nebraska under a flag of truce.  When he arrived some misunderstanding arose due to a bad translator and they started to arrest him.  When Crazy Horse realized he was being arrested,  he resisted,  and a soldier killed him with his bayonet. In addition to the museum, you can also see a glimpse of the "Sculptor's Home and Studio" and visit the "Mountain Carving Gallery".  I thought this area was so fascinating.  There is a wall of pictures showing the entire process of carving the mountain until present and also a model depicting what it will eventually look like. 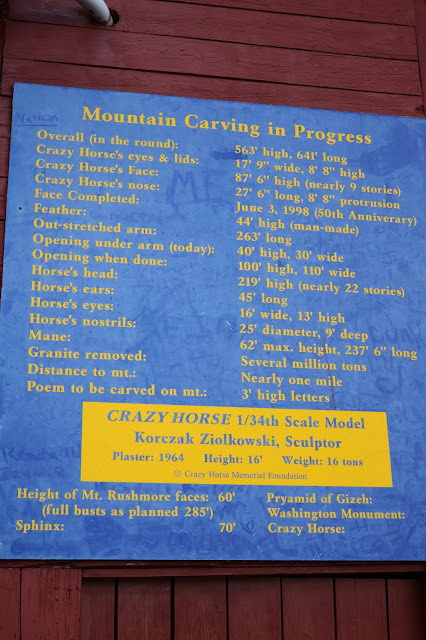 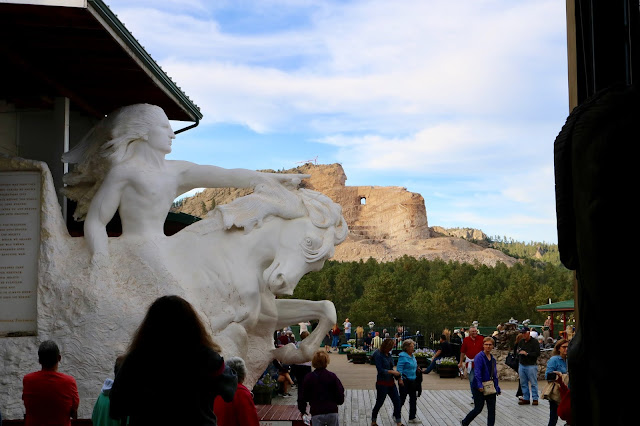 I love how they placed the model example right in front of the actual carving so you can back up and compare the two at the same time.  It really helped me to visualize what it will eventually become. 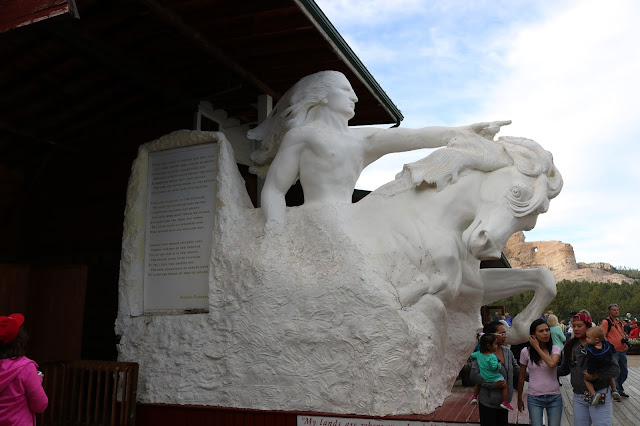 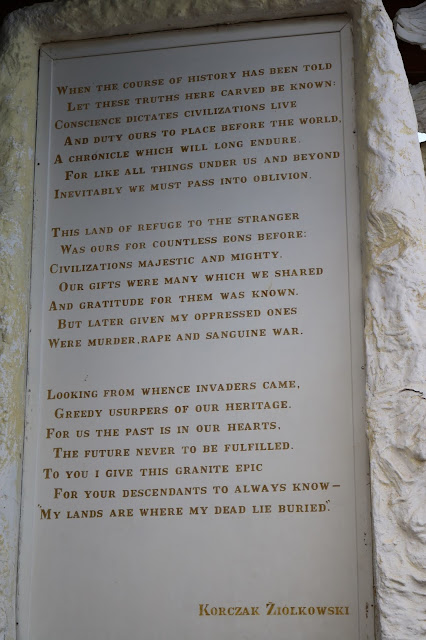 Here are some of the old pictures that were in this gallery. 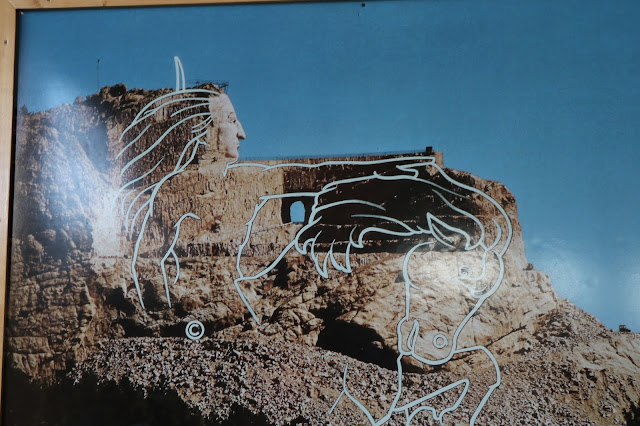 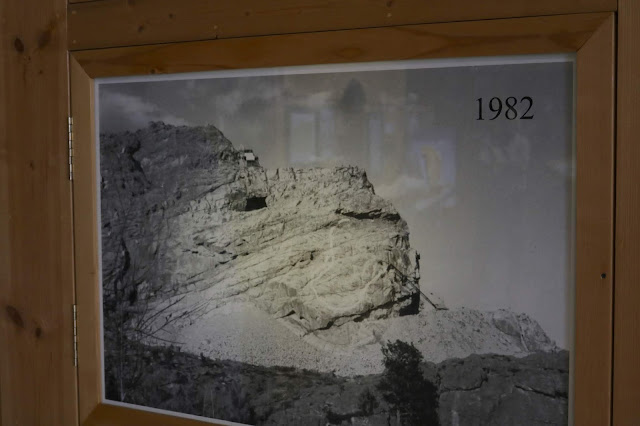 We happened to be there when the Ziolkowski family was having a birthday party honoring their grandfather.  It was a private party so they closed the restaurant, but would you believe they invited EVERYONE in for a piece of birthday cake after the night blast?  I thought that was so sweet, and so typical of this family.  At first I thought there would never be enough cake for all the people that were there, but there was!  And it was so good too! 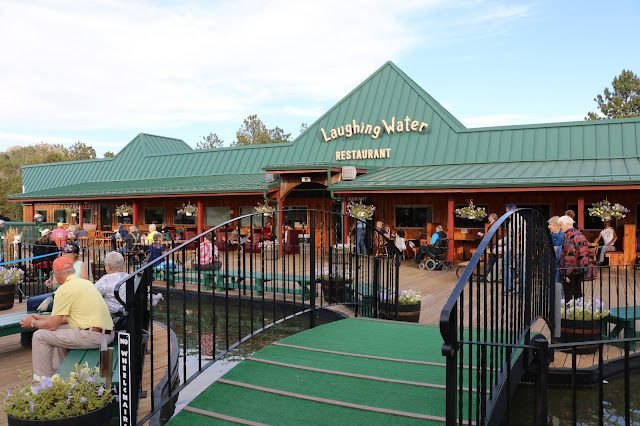 As we awaited night to fall and the Laser show to begin, we were blessed with Native American story tellers and dancers. 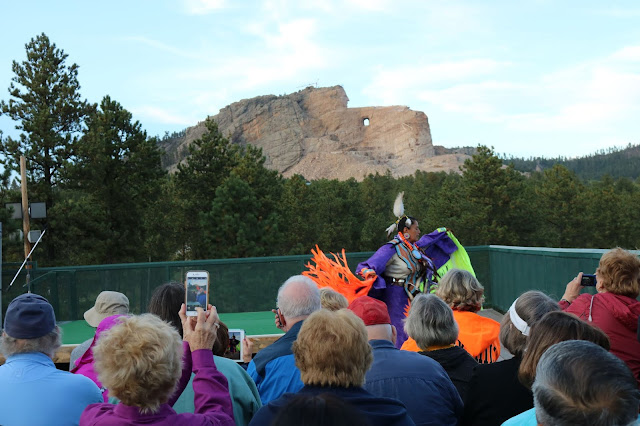 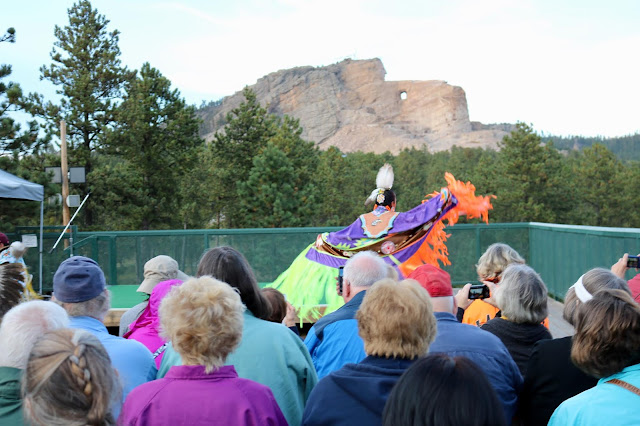 At night the monument is lit up.  It's so beautiful to see at night. 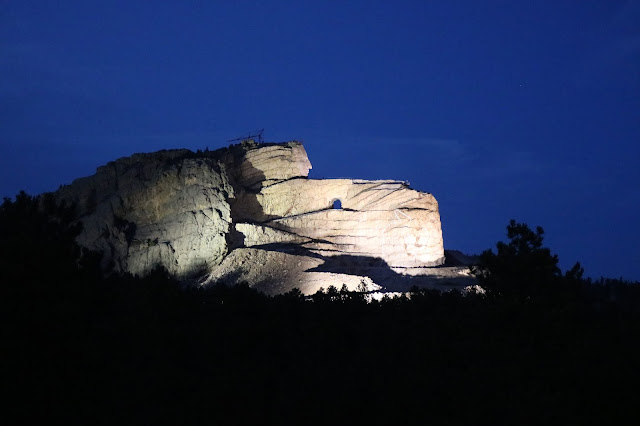 Now, I don't have any pictures of the laser show or the night blasts as my camera would not work in such darkness, but you can see pictures HERE and I will tell you a bit about them.

The "Legends In Light Laser Show" is held every night from Memorial Day through September 29th.  The monument turns into a screen where lasers light up the night sky and shares the history and culture of Native Americans.  It's very beautiful and moving to watch.

The "Night Blasts" are only twice a year:  June 26th and September 6th.  This is pyrotechnic show and is so exciting to watch.  You must look at the pictures on their website.  The explosions start at the mountain base and travel all the way to the top of the monument.

There is so much more history to share of Crazy Horse and the origins of the memorial, but it's way too much for me to cover them here.  If you're interested in learning more,  it's all on the website linked above.

I do hope if you're ever in this area that you do not skip this memorial.  It was quite the emotional learning experience for us, and I also think it really rounded out our trip.  There is so much history in the area, especially of General Custer, it was nice to learn about the Native American history too.