After a three month absence, I'm finally back in my kitchen again.  Grilling and salad season is over, the weather has cooled (barely), so it's time to cook!  So here's what I've been making!

Wisconsin has had a very wet season resulting in a lot of flooding and the worst mosquito outbreak I have ever experienced in all the years I've lived here.  As a result, most people's tomato plants didn't do all that great...mine did o.k. but they seemed very late to ripen.  I didn't have tomatoes to almost September and when I did I had so many tomatoes I couldn't even use them all.  A lot were left to rot on the vine I'm afraid.  I also for the first time ever had insect damage...they kept eating holes out of the tomatoes.  I caught a few of the buggers in action:  slugs, a moth, and some little black beetle.  But despite all this, I still had more tomatoes than I could use, so the insect damage didn't matter.

But what's a girl to do with buckets and buckets of tomatoes all at once?  Well, at first I just made salsa...lots of salsa.  But I really grew tired of doing that, plus I had to buy the peppers and cilantro, so it wasn't much of a cost savings.  After five batches, I quit.  Then I just started eating them, as much as I could handle, because I hate to see food go to waste.  Soon after wards, I had pressure on my bladder that wouldn't go away so after some self-diagnosis on the Internet (yes I do that first, my health insurance doesn't pay for anything anymore ever since Obama care took effect, so I no longer go to the doctor unless I'm on my deathbed. )  I discovered tomatoes caused bladder irritation.  I stopped eating the tomatoes, along with increasing my water in-take and other home care remedies, and wa-la, the bladder discomfort was gone.

But before I let the rest of the seasons tomatoes go to waste on the vine, I did make some awesome dishes that used up a lot of tomatoes.  Here were my two favorites. 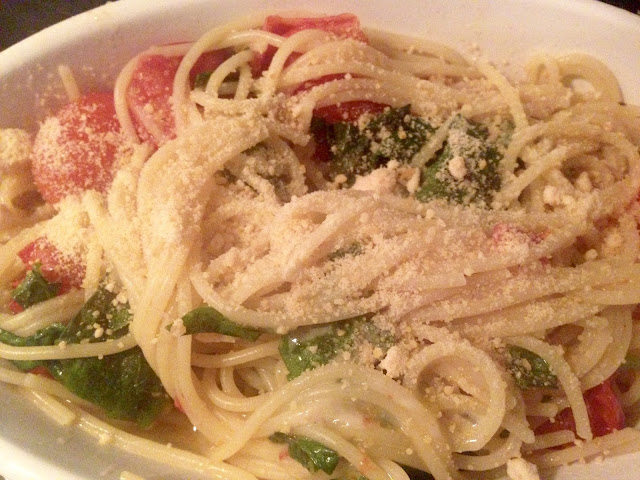 This was a dish that I absolutely loved.  My husband however, hated it.  But he hates any pasta dish that doesn't involve spaghetti sauce from a jar. What can I say, he's weird.  He got attached to that taste as a child, and won't let go of it.

This dish uses 3 to 4 cups of cherry tomatoes....so I really was able to use up those tomatoes.  It's a very 'light' dish, so if your watching your fat and calories but are still craving pasta, this is a perfect dish for you.

I love the flavor and found it very easy to make. 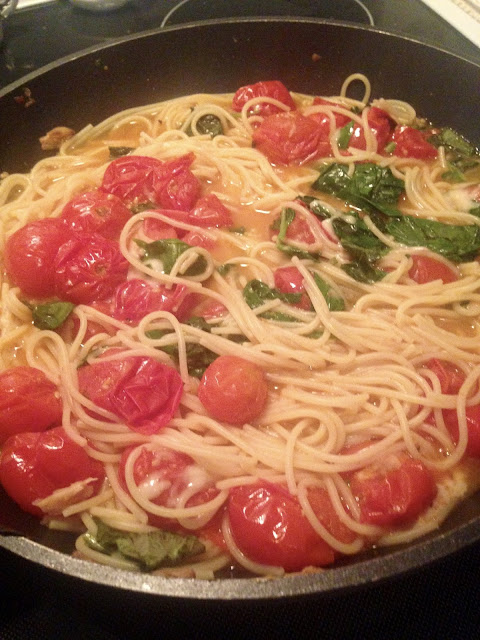 The next tomato dish I tried was homemade tomato soup.  I have to admit, I was a little leery of this one.  I was afraid it would involve too much work (you know me, the less time I have to spend in the kitchen, the better) and not taste very good.  But I was very pleasantly surprised with this soup.  It was a little more work than I would have liked (I took the skin off my tomatoes) and I don't like to 'puree' hot foods (I really need to buy an immersion blender),  but it wasn't that difficult and I really liked the taste.  Because of the balsamic vinegar, it had a little kick to it which made it taste a bit different than the traditional canned tomato soup.

But the real taste test came when my husband tried it...because you know him, he doesn't like anything different than what he is accustomed to.  He is a Campbell's Tomato Soup fan so I was terrified he would hate it.  But you know what?  He liked, he really liked it!  (LOL!  Remember the old Mickey's Life Cereal commercial...that's my hubby!) 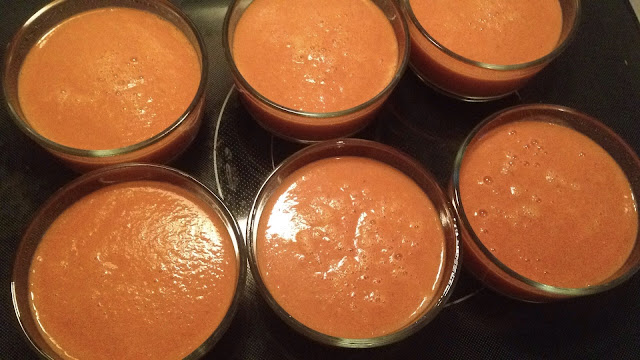 And finally, in addition to tomatoes I needed to use up, I also had several cans of expired pumpkin puree that I needed to use up.  So I made two loaves of pumpkin bread (husband approved), and then I made pumpkin cookies (husband disapproved).  My husband tried one, expressed his displeasure, and left me to eat the whole batch myself.  Sigh.  There went my diet. 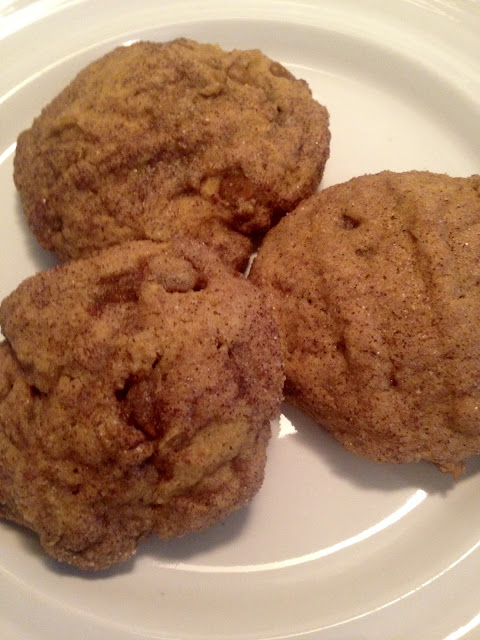 What did I think about the cookies?  Well, mine looked no where near as nice as the cookies on the website.  I thought they were o.k, but nothing to rave about.  I would have loved some chocolate in there.  Mine also ended up puffy whereas the cookies on the website looked nice and flat.  I don't know why that happened.  It said to "lightly press down" but I think I needed to flatten them a lot more.  Also, the dough was super sticky and hard to work with.  I think it should have been refrigerated for an hour or more so it would be easy to work with.   But it didn't say to do that in the instructions, so I didn't.

This recipe didn't use the entire can of pumpkin puree, so I had a little left over.  I then made a Pumpkin Smoothie for breakfast.  That was a nice change from my usual breakfast smoothie. 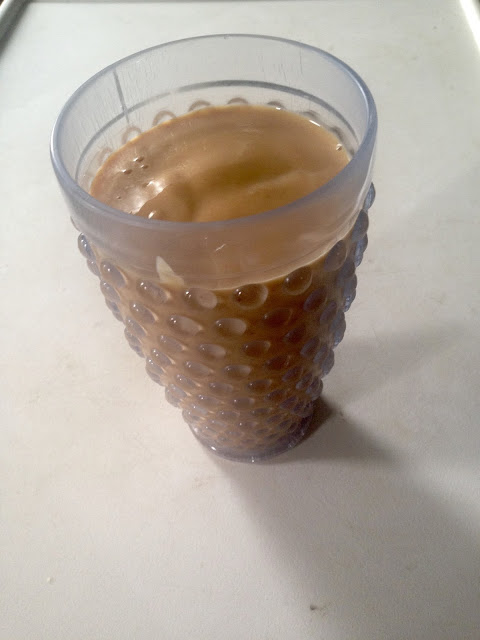 I thought this smoothie had a nice taste, but I wouldn't make it unless I had extra pumpkin puree to use up.  I like my normal fruit smoothies.  Also, it said to sweeten it with Agave nectar.  I didn't have that.  I just threw in a Splenda packet and it was just fine.  You could also use honey.

So what about you?  Did you plant any tomatoes this year?  Did you have a good crop?  What do you do with your abundance of tomatoes?  I'd love to hear from you!