Hello!  On day five of our Spring Vacation we visited Nashville, Tennessee and boy did we cram a lot into one day!  Today's post is just about what we did in the morning.  One of our goals on our vacation, was to tour a plantation.  There were three estates/mansions/plantations in the Nashville area open for tourists:  the Carnton Plantation, the Belle Meade Estate, and The Hermitage.  Since we were only in the Nashville area for two days, we could only go to one, so we chose The Hermitage because it was presidential.
We arrived at The Hermitage on a beautiful spring morning before the place even opened.  The temperatures were in the sixties.  Up to now, we had spent so much time in urban environments, it was nice to be back in the country again.  The grounds of this estate are absolutely GORGEOUS:  filled with flowering trees, lush green lawns, flowers,  horses and wildlife.

After paying an admission fee of $27.00, we then received a head set (second time on this vacation I wore a head set!), and set off for the tour.  Just like Graceland, when you reach a display area, you just type in the number in the display and you hear a story. There is also a short movie you watch telling you all about the history of President Jackson and his beautiful home.

Prior to entering the grounds, there were many displays/artifacts to learn about the people who lived on The Hermitage and it's history.  What I liked to hear most was all the personal stories:  specifically the beautiful, amazing, and even scandalous love story between President Jackson and his wife.  You don't learn those things in American History classes!  There was even a display of mannequins that were the exact physical proportions of the couple:  Mr. Jackson was a bean pole:  he was 6 ft 1 and weighed only 145 pounds!  That's what I weigh, and I'm only 5 ft 7!  And his wife Rachael was the exact opposite, she only came to his chest and was quite rotund.  In fact, her mannequin gave her quite the belly, even though she was never able to conceive a child.

After learning some brief history of The Hermitage, we then entered the grounds.  Again, there are stops all over the estate where you type in a number and hear a story.  Here is a front view of this gorgeous home: 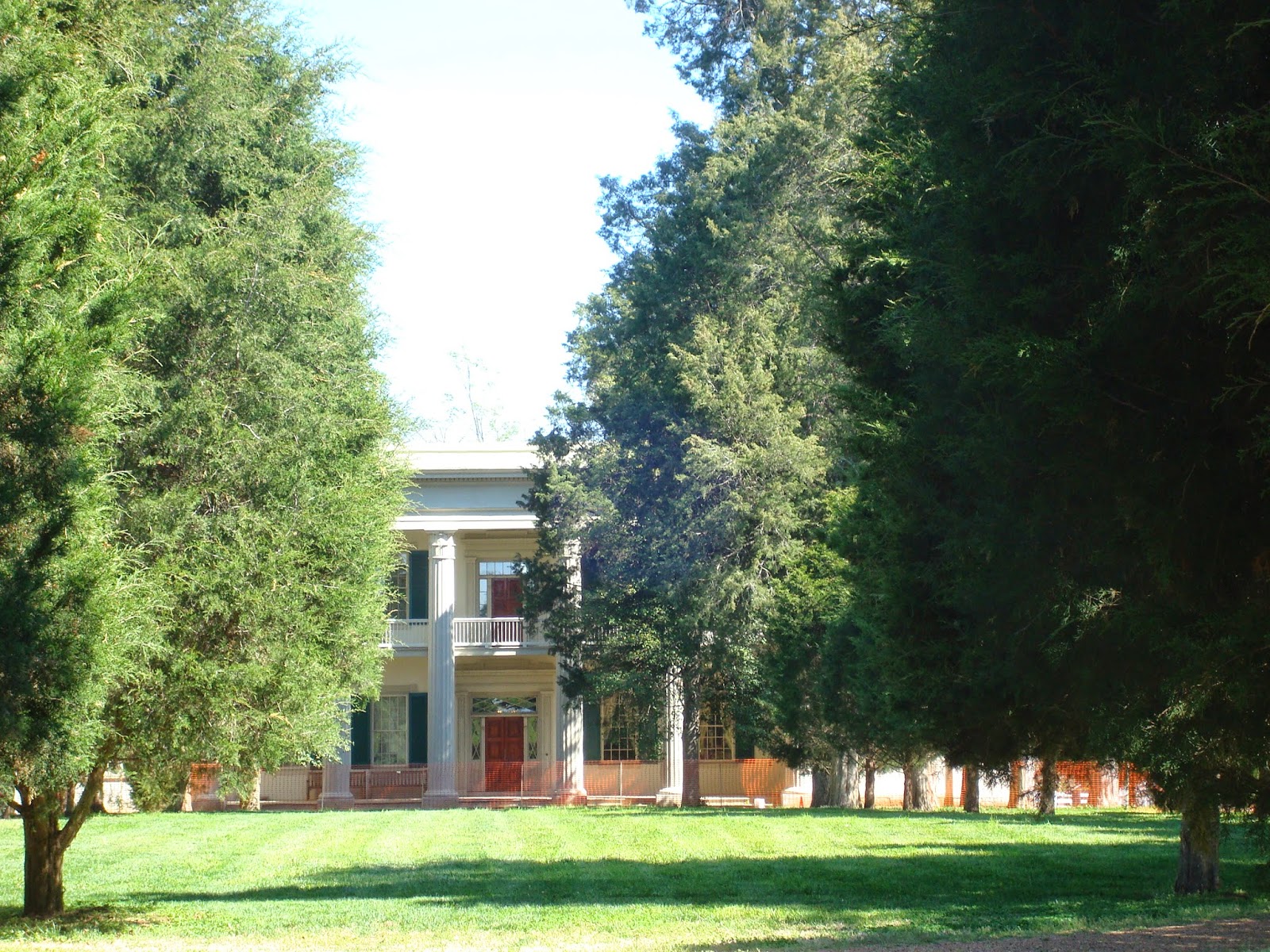 The estate is quite large, so if you don't want to walk it you can also take a wagon ride for a fee. 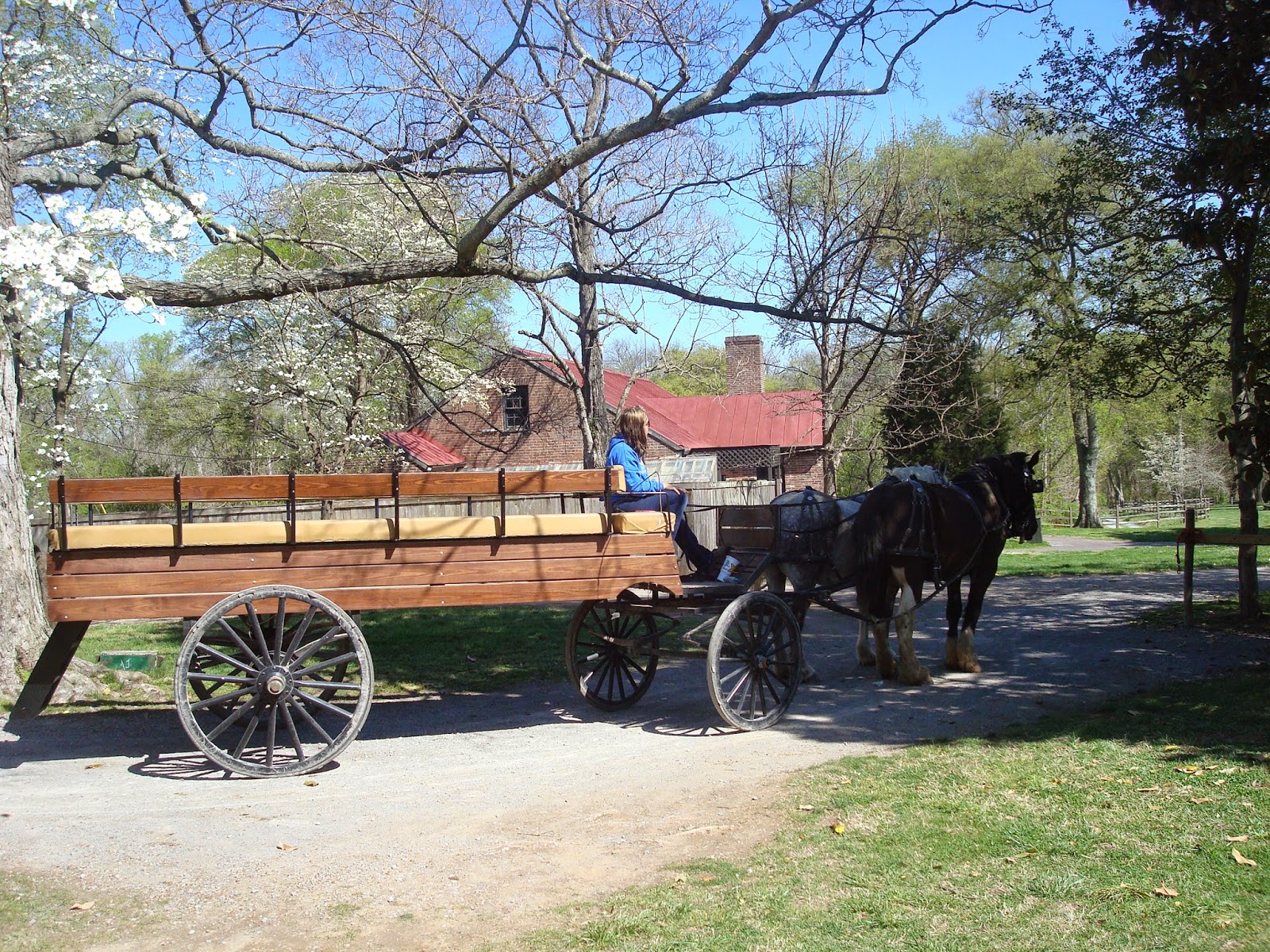 Rachael loved to garden and just like me with my garden, it was her place to find peace and solitude from the worries of this world.  Here is a picture of her garden below: 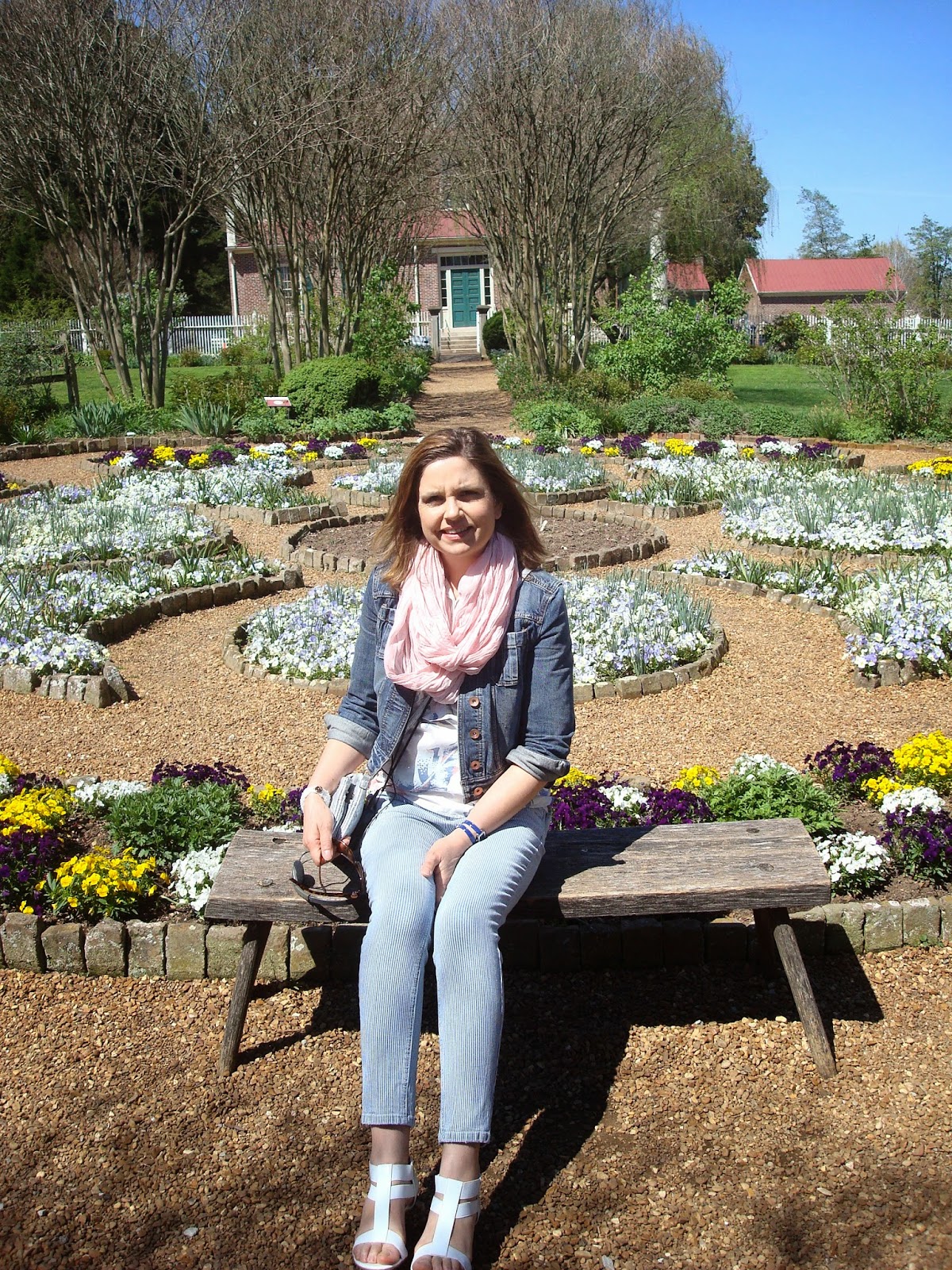 This is a side view of the house as viewed from inside the garden. 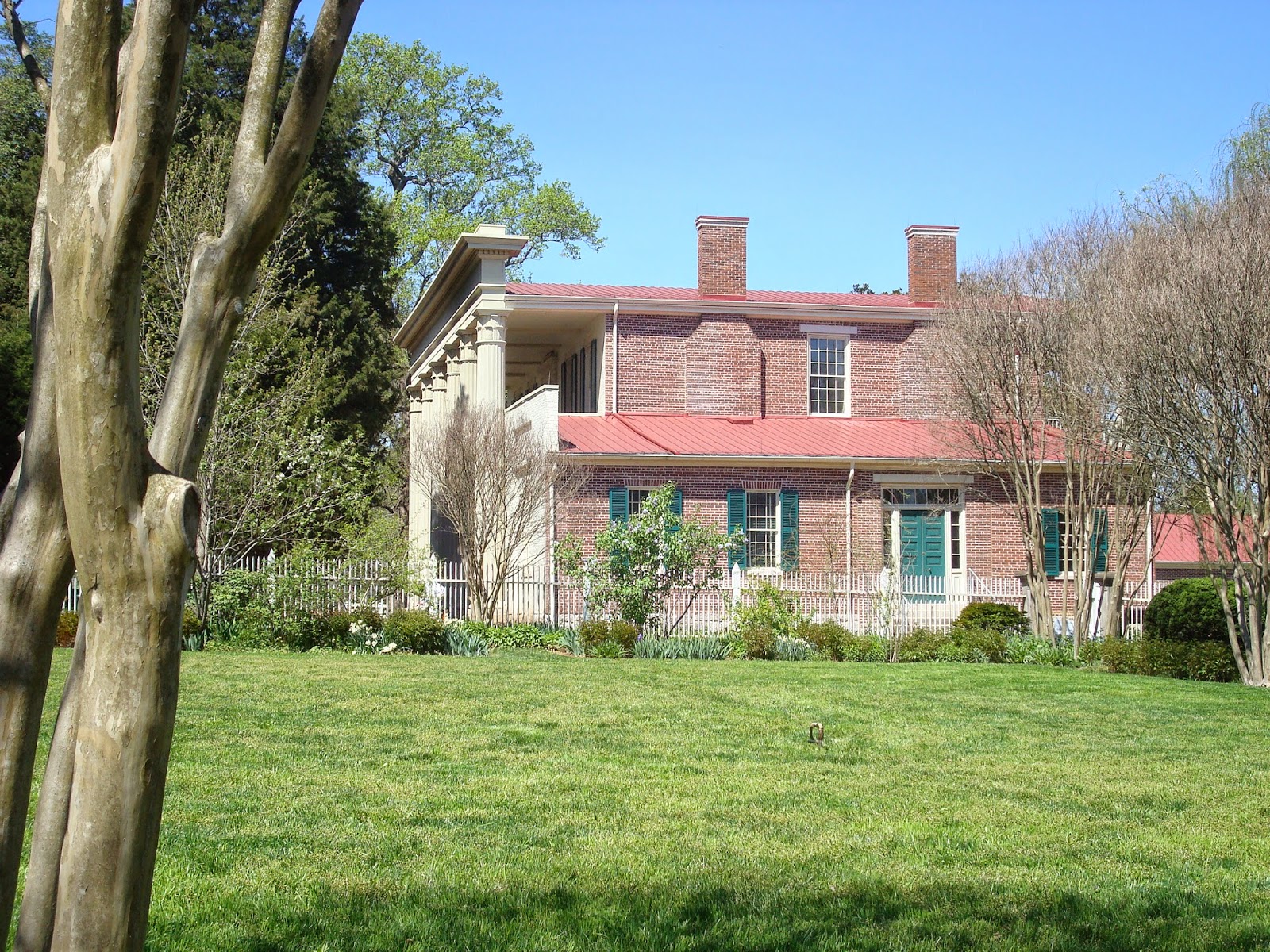 There is a small cemetery inside the garden where Andrew Jackson and his family are buried.  Even one of his slaves is buried in this cemetery.  The Hermitage teaches a lot about slave life on the plantation,  and speaks the truth about Andrew Jackson:  both good and bad. 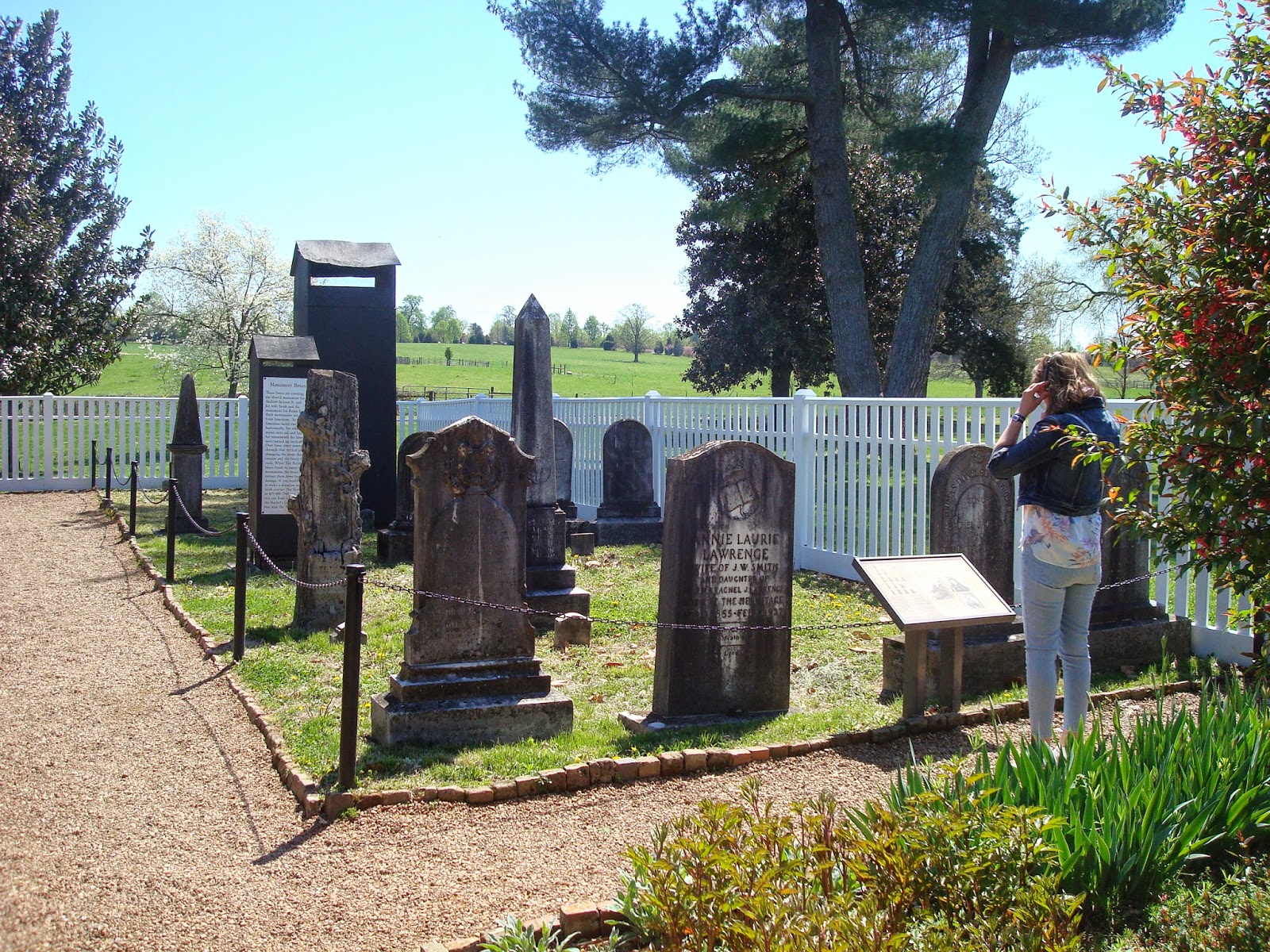 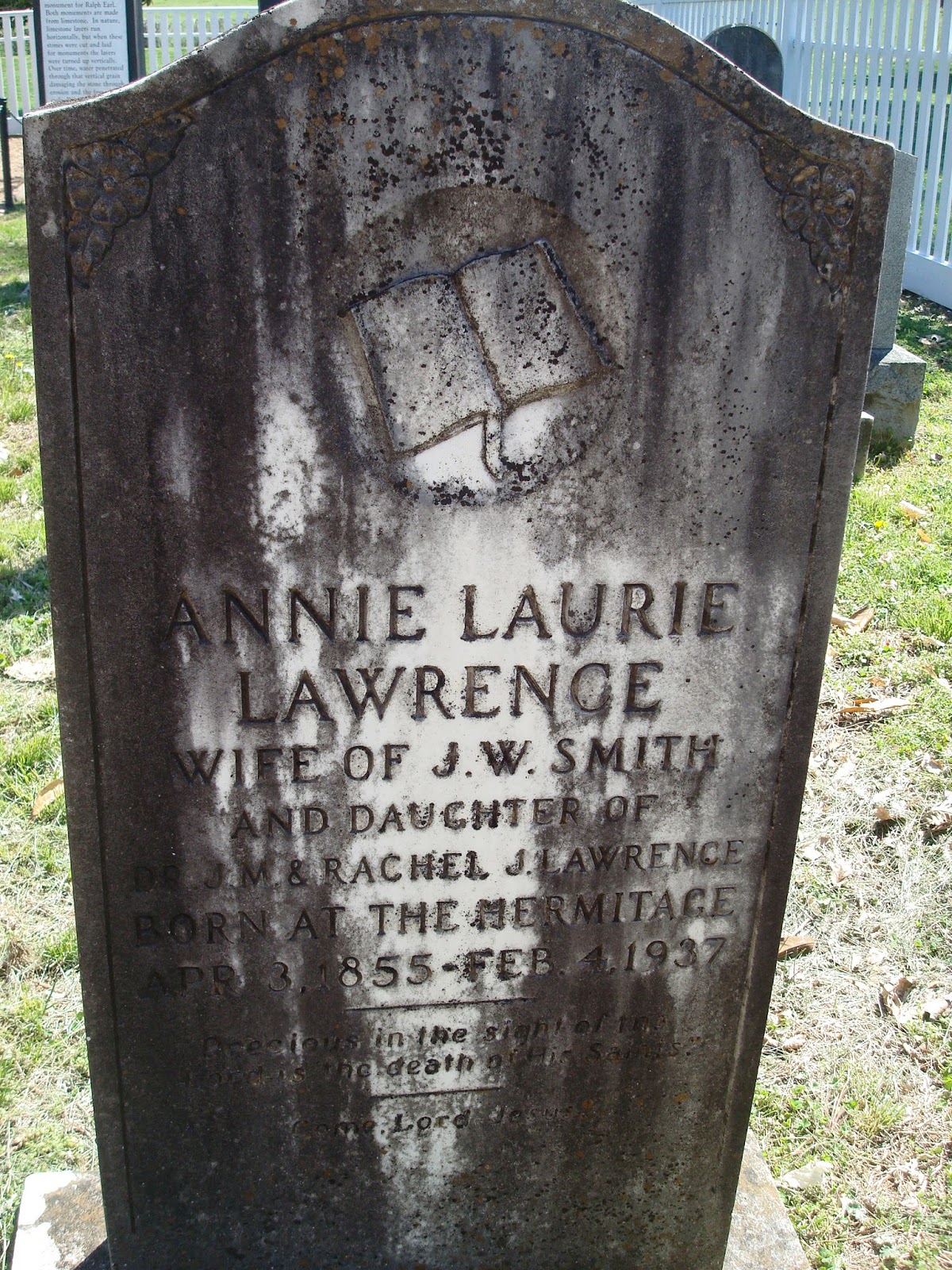 There were many slave quarters on the property that you could go into and see how they lived.  They reminded me of little log cabins one sees in the north and west.  I don't have any really good pictures of these cabins;  you can see just the edge of one in the left hand side of this picture, and there is another one behind the white flowering crab in the next picture. 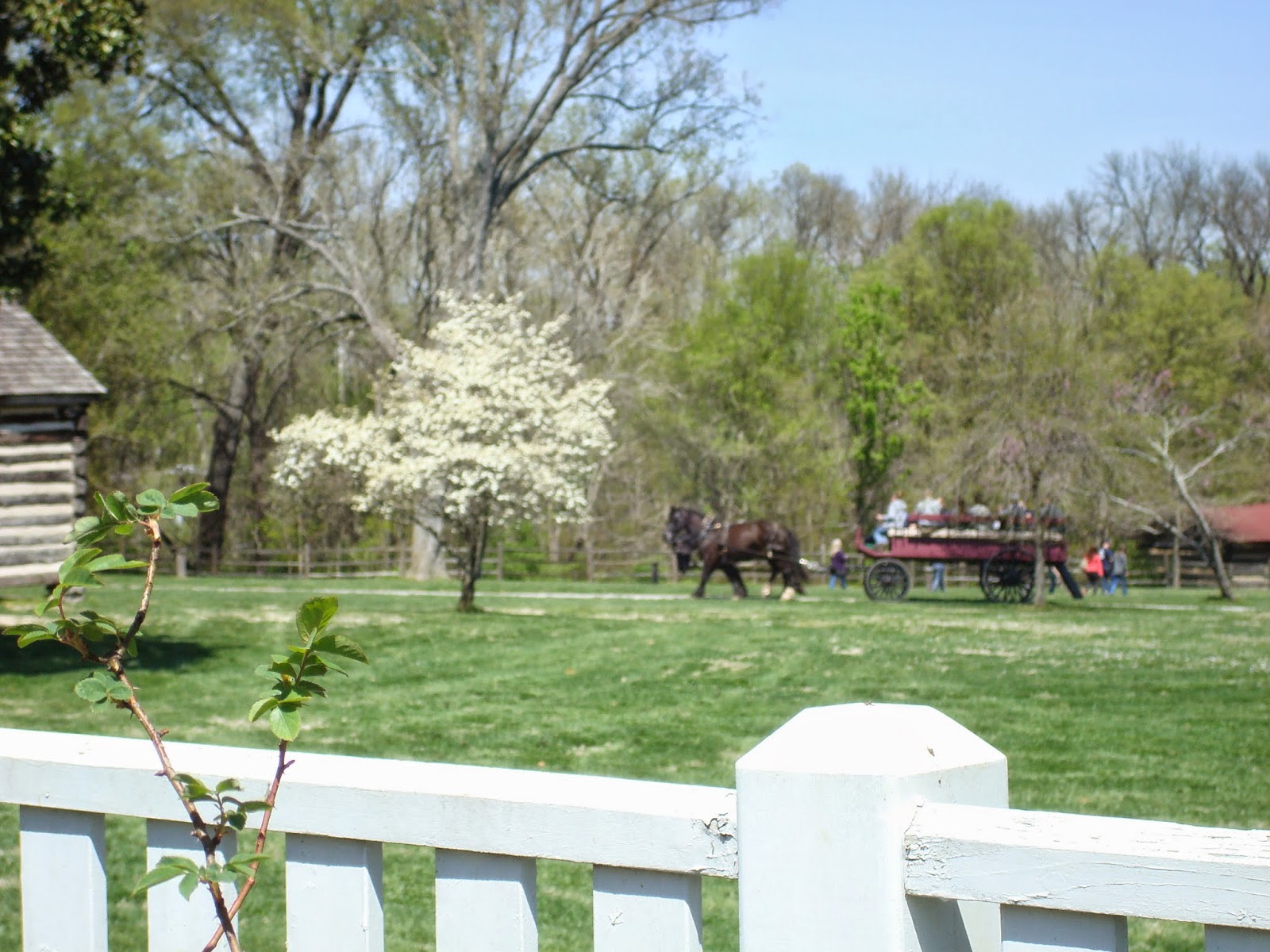 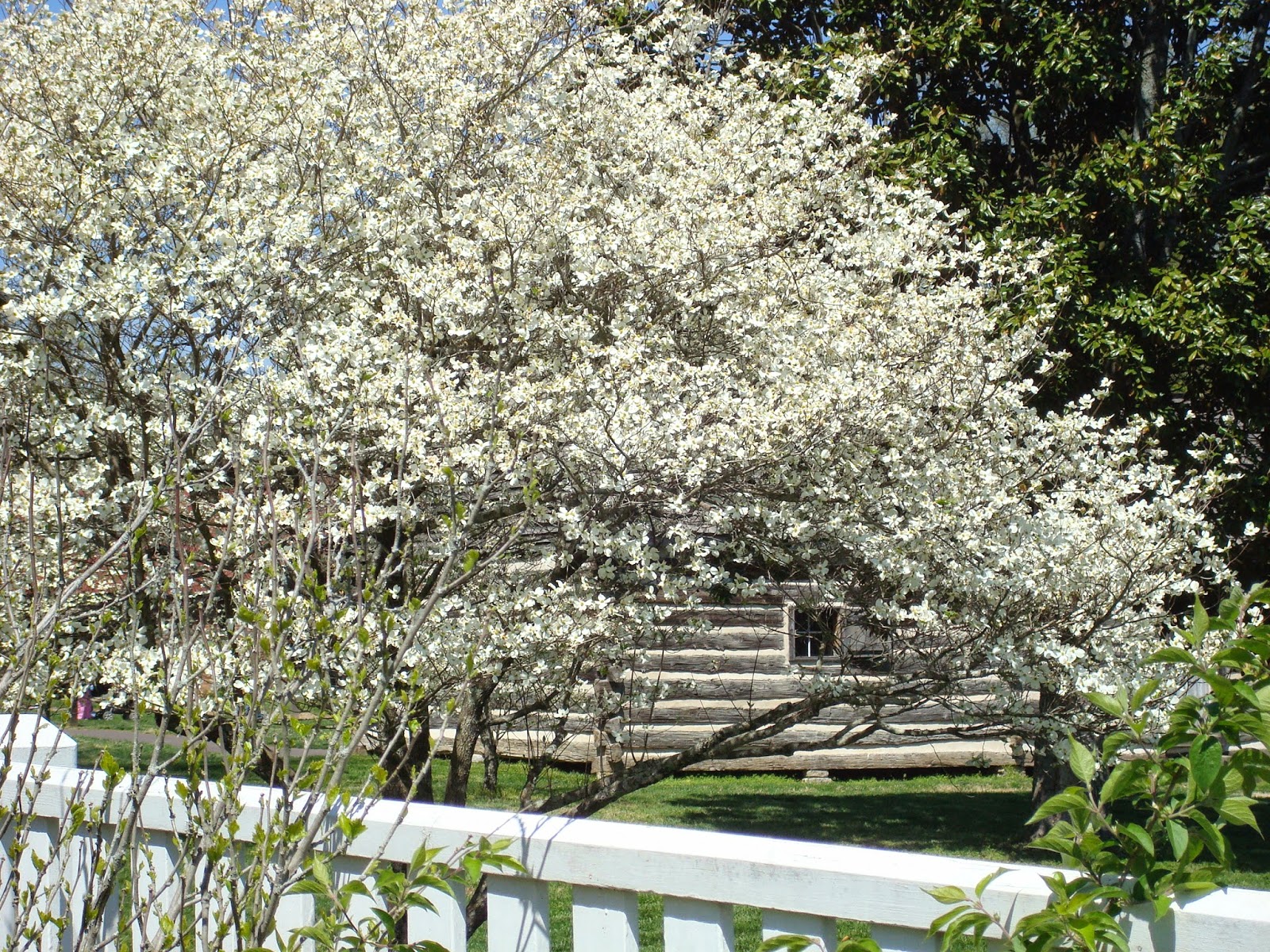 Here are more slave quarters pictured far away in the scene below. 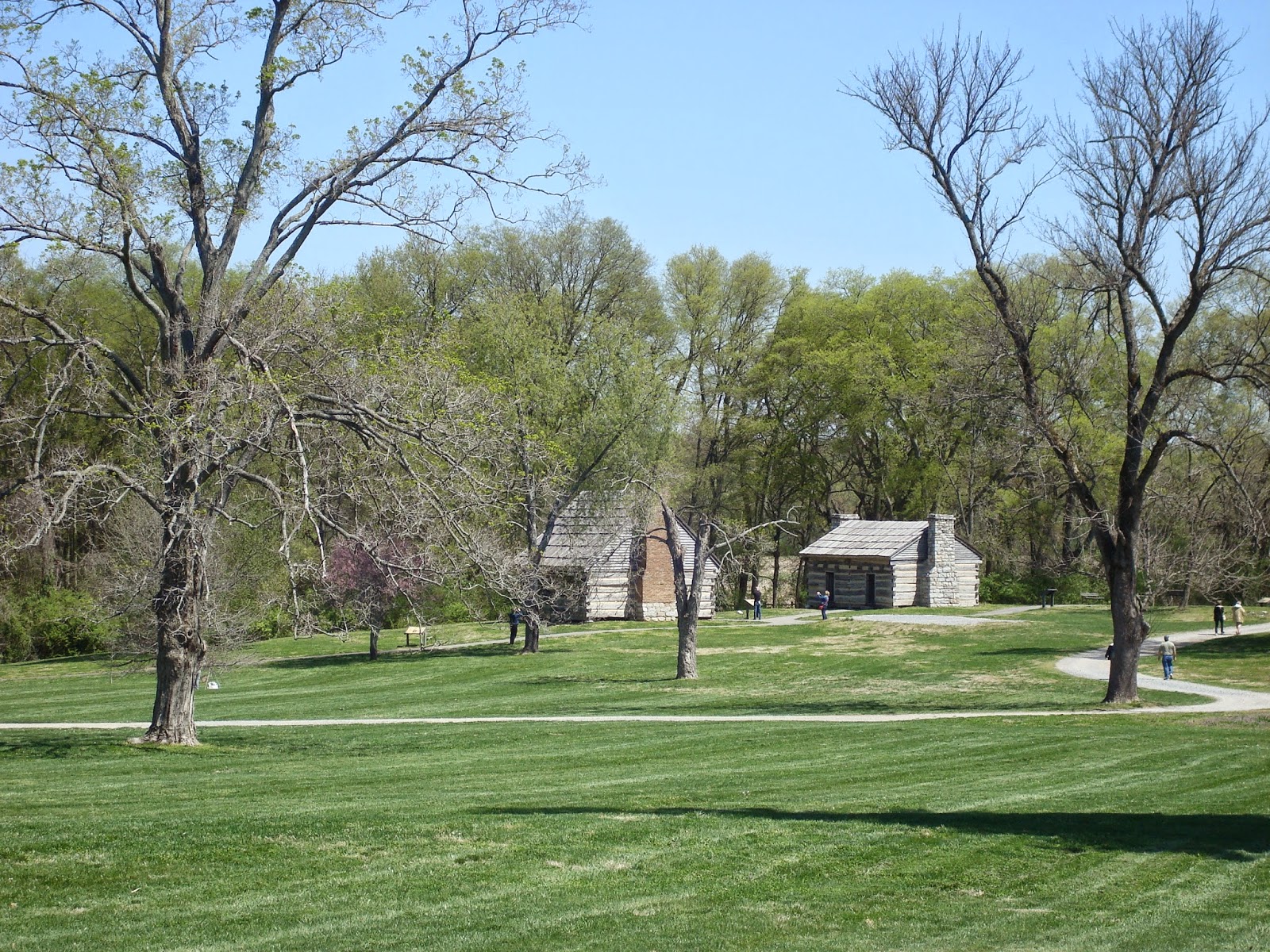 This is the back side of The Hermitage.  We did go inside but you are not allowed to take any pictures.  It is absolutely gorgeous inside and beautifully decorated.  What I liked most, was that because this home was opened as a museum in 1889,  it is well preserved and as similar as possible to when the president lived here, making it piece of living history.

The most wonderful story I heard about President Jackson was how he hung a picture of his late wife above the fireplace in his bedroom, so that her face would be the last thing he saw before he went to sleep, and the first thing he saw when he woke up.  How romantic! 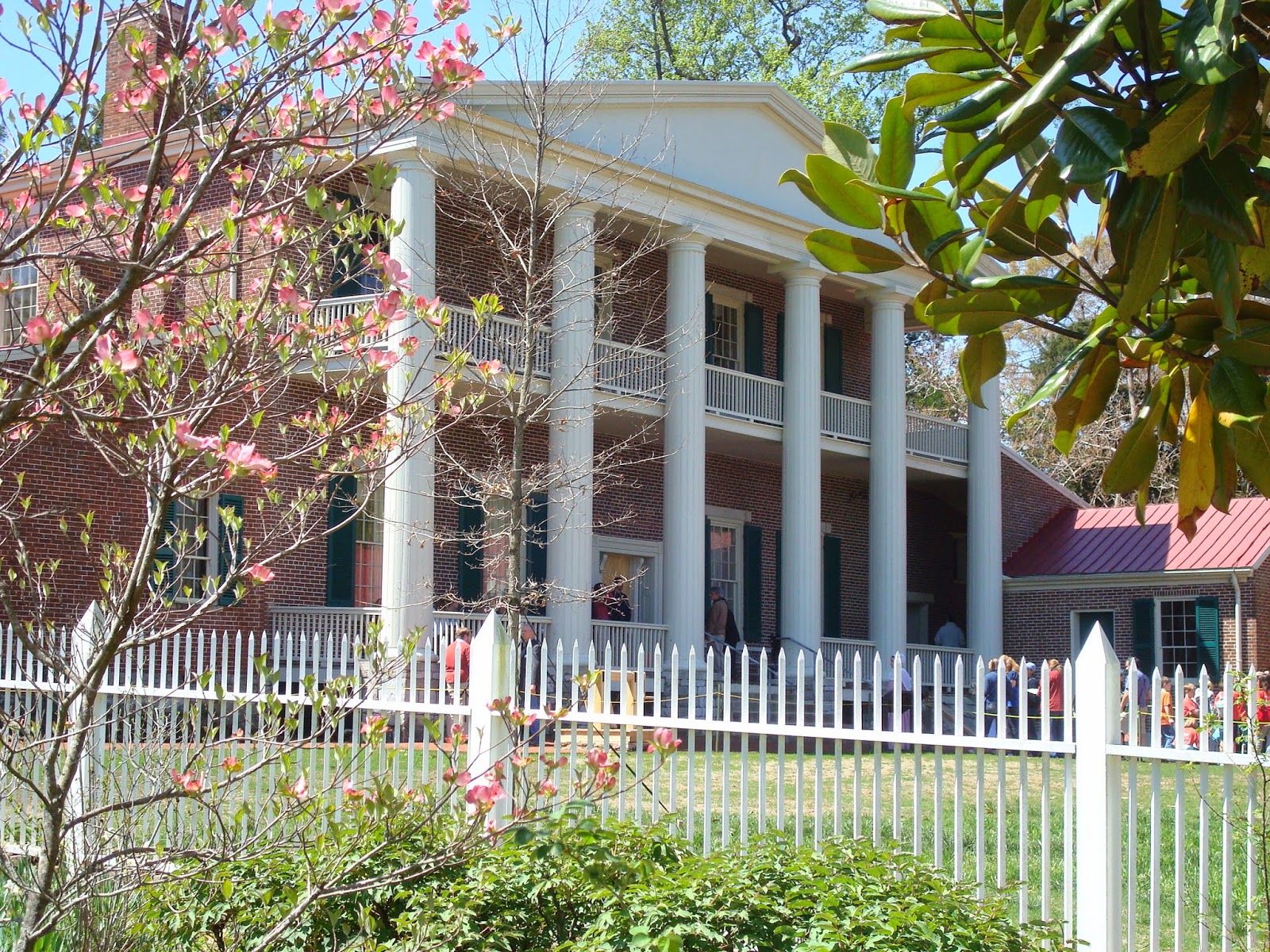 President Jackson admired Greek Revival architecture and had his home remodeled to reflect that interest after a chimney fire in 1834. 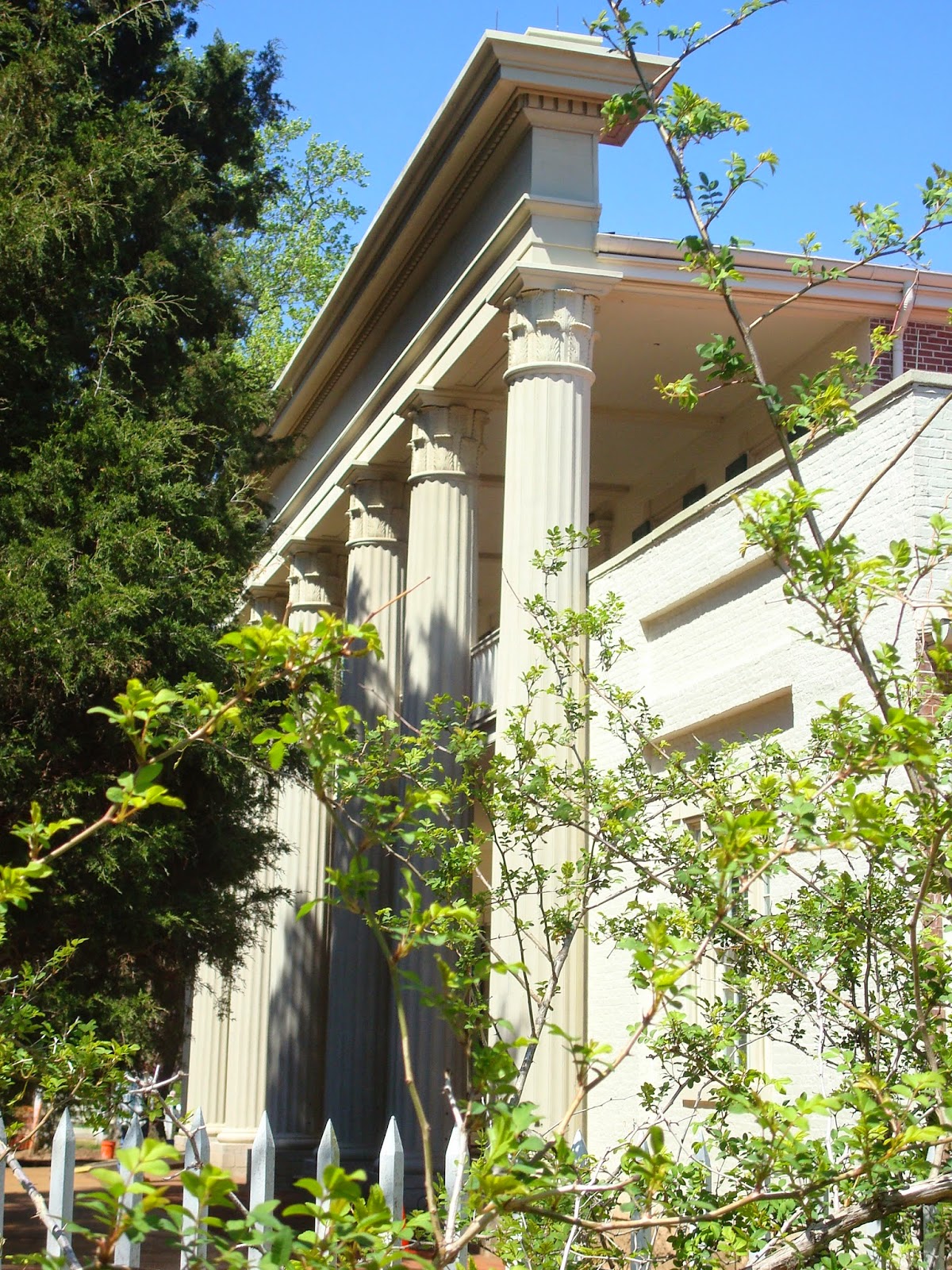 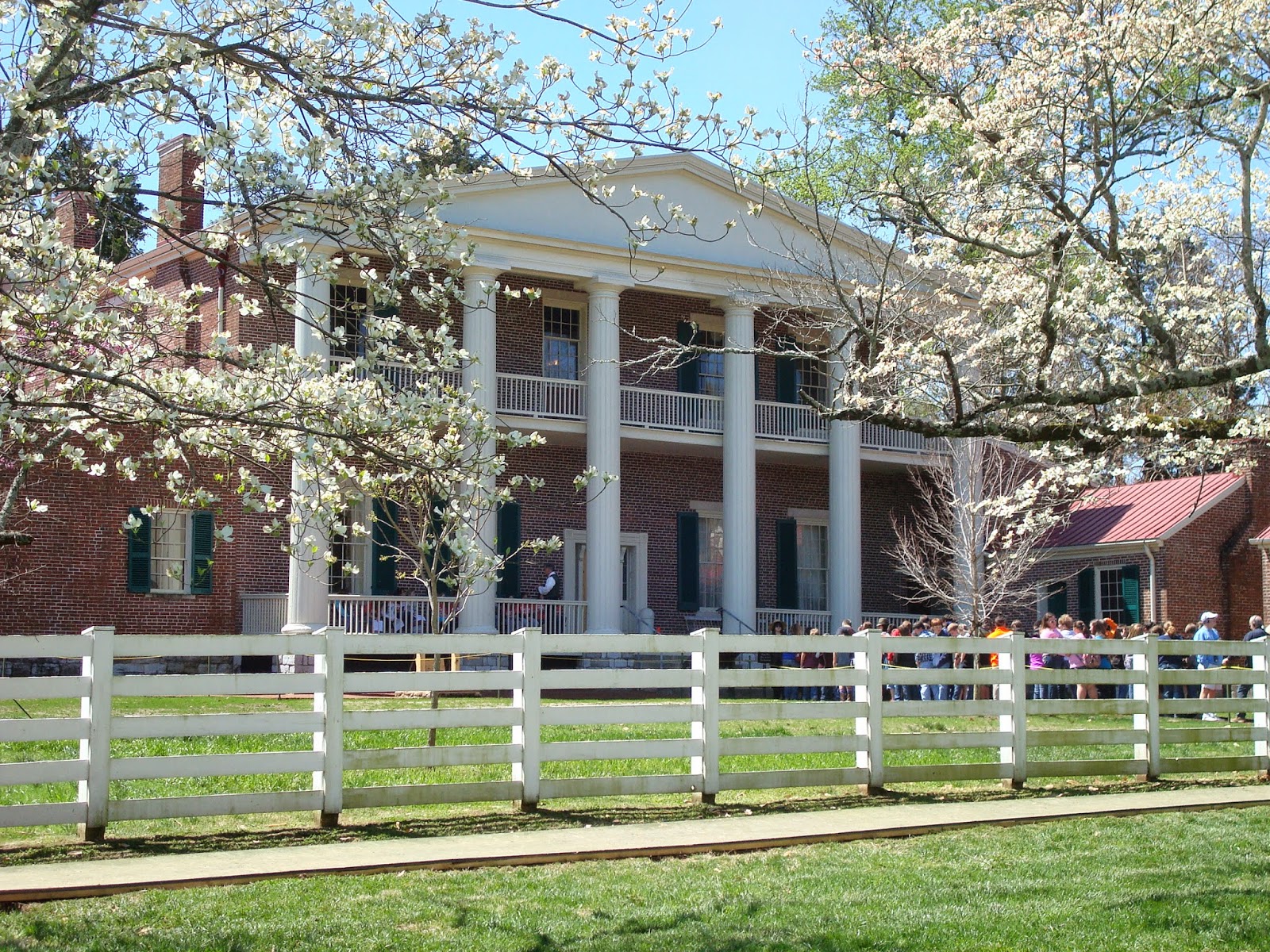 After leaving the home, we then toured the massive grounds, of course we had to stop and pet the horses first! 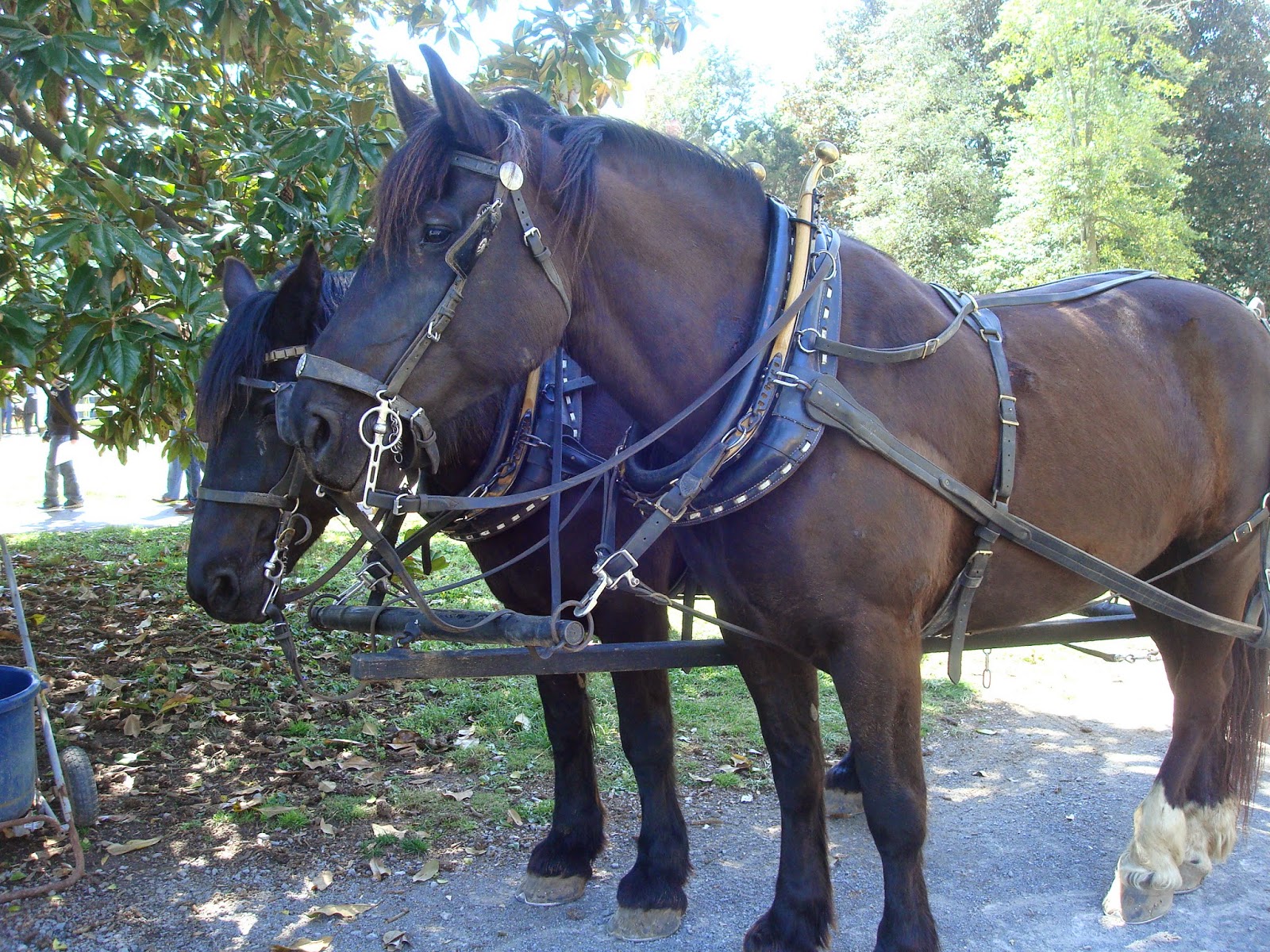 There are the remains of the first home the president and his wife lived in before the mansion was built on the property also.  It is a simple, modest log cabin.   My husband remarked that was quite the standard of living increase going from the little home to the big, beautiful mansion!

There was a gorgeous little brook running through the property.  There I am pictured below in front of the running water.  The building behind me was their well.  It was quite a long walk from the well to the mansion,  I can't even imagine walking that distance with pails of water every day. 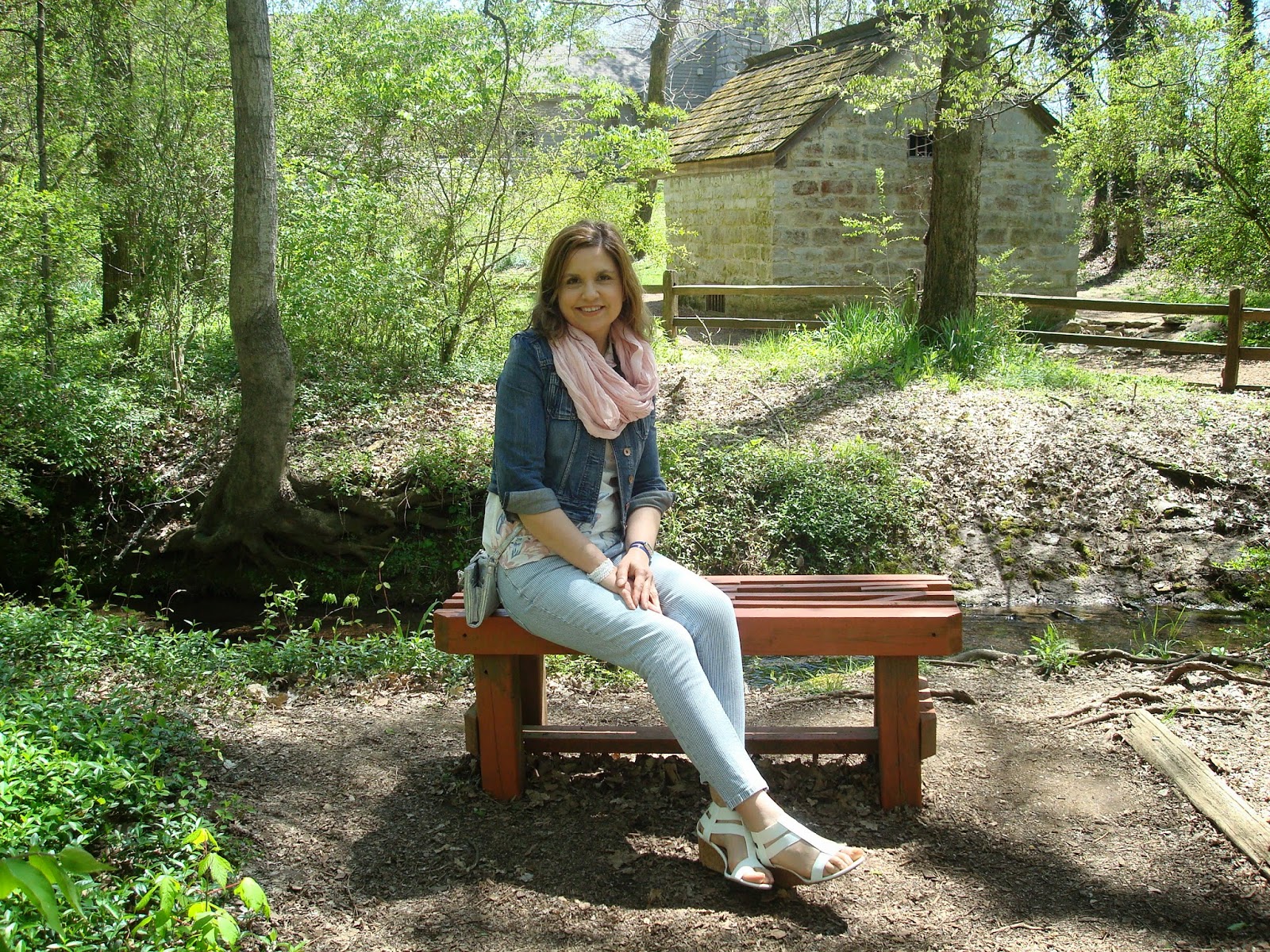 It took us about four hours just to get through all the exhibits, the mansions, and grounds, and we were really hungry at the end of our tour, so we left without visiting the museum which held many artifacts and more displays of Andrew Jackson and his life at The Hermitage.

We really enjoyed our time at The Hermitage, and would highly recommend it to anyone visiting the Nashville area.