My Last Day In Italy!

So is it snowing where you live? It certainly is here. The snow is knee deep and it keeps coming down. We are in a Blizzard Warning until midnight. I'm suppose to work tonight. I don't know what I'm going to do, because my road isn't plowed yet. I also live 45 minutes away from work, on dangerous, curvy, isolated, roads, so even if they did manage to plow my road before I left, it would not be wise to drive. I'm scared to even call in to work to tell them I can't make it. I'm afraid they'll tell me I have to find someone else to cover my shift, and I just don't feel comfortable asking anyway to drive in this weather. I just heard the weather man say it takes 45 minutes to drive from one end of the city to another, which normally would take only 15 minutes. My husband didn't even go into work today, and he hasn't missed a shift in 11 years! So you know its bad if he stays home. But he's not in retail, so he doesn't have to worry about finding someone to cover his shift.

Anyway, onto my last post about my trip to Italy. Thankfully, we had another beautiful, sunny day to enjoy, since so many of our days in Italy were filled with clouds. By our final day, Pam and I were both tired of sight-seeing, and still had some Euro's left in our pockets that we hadn't spend and didn't want to transfer back into dollars (there's a fee every time you do that), so we decided to spend the day shopping for gifts for our loved ones back home. However, our first stop was this gorgeous piece of architecture. We had driven past it several times during our week in Italy, but were never able to photograph it because its on a very busy street. On this day however, Pam and I jumped out of the car, leaving Anny inside to drive in circles till we could jump back in, to photograph this beauty. I was so happy we did. 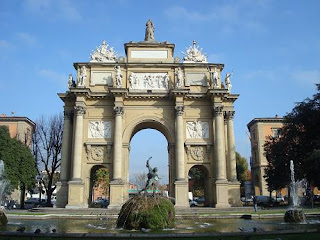 From there we went back to the Centre of Florence to buy our souvenirs. I have already shown you pictures of the vendors in an earlier post, but I didn't show you the food market pictures. In the Centre is an indoor food market where you can buy and taste all the food Italy is famous for. It is quite the culinary treat for the eyes, and mouth!
Here is a picture of Pam and Anny at one of the vendors. I took this picture of the Pinocchio statue because you see Pinocchio dolls everywhere in Florence because the author of the book was born there. I actually bought a hand-carved Pinocchio puppet as a souvenir. 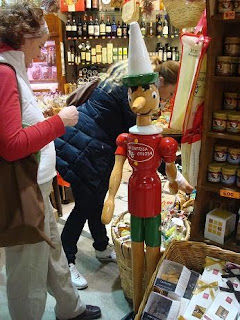 Pigs head, feet, and all the other parts of the swine. Mmmm, yummy, heh? LOL! 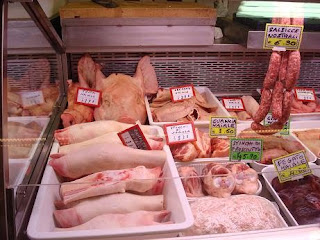 This is how they display their chickens in Italy. They leave the heads on! Yuck! 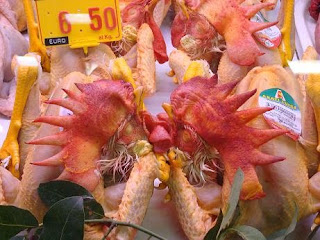 Believe it or not, I'm actually eating a ground up pigs head here. And you know, it was absolutely delicious. Notice the shawl around my shoulders? Its actually an Italian Scarf that I bought while in Italy. I just love it. I wore it both as a scarf and as a wrap. I got so many compliments wherever I went. 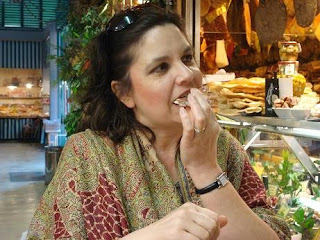 Here is a display of all the variety of nuts available in Italy. 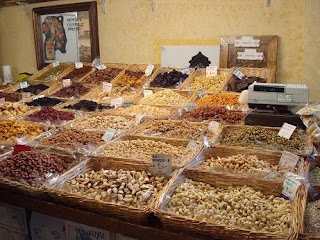 And all the available dried fruits. 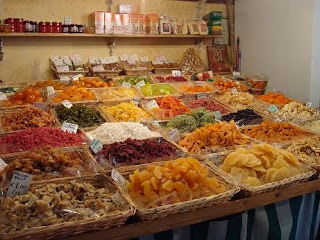 And my favorite display...the flowers! 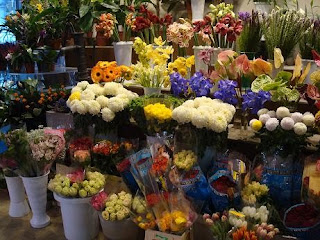 The furniture store IKEA is very popular in Italy. Anny loves their stuff. I personally can't stand anything IKEA makes. Their products are just too cheap and modern for my taste. It was an IKEA futon that I slept on all week in Italy, and by now, you all realize how miserably I slept. I think IKEA is very popular in Europe because everything on the outside of buildings is so old, that people tend to want modern things for the inside. That's my theory anyway. Anyway, Anny wanted us to see their store so we went there next. I was stunned at the beauty of the mountains behind the store. It was very, very, busy inside. I was surprised by that since it was the middle of the work week. Anny said its packed on weekends. So they really do like their IKEA products in Italy. 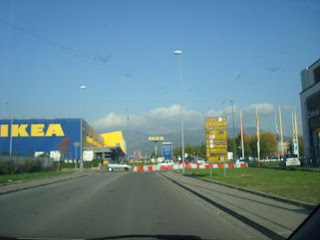 And that was basically my last and very uneventful last day in Italy. Just shopping, and then home to pack for the long 24 hour trip home. We both very anxious to get back. Pam was really missing her family...she still has 3 little children at home. This is a picture of Pam wondering if were ever going to board our 2nd plane. 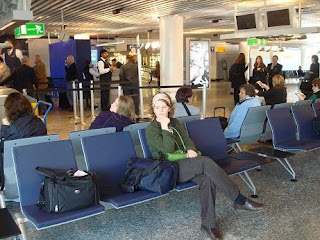 And here is a view of the airport in Germany as we await our 11 hour plane ride home. I bought a neck pillow at the terminal so hopefully I could sleep better. However, I ended up not sleeping much at all because of the time change...there was too much light in the plane...we left in daylight and arrived in America in Daylight. It was such a weird experience. My body felt like it was night time, yet the sun never stopped shining brightly.
Getting back into America, even as a United States Citizen was quite the ordeal. I wish I had some nice things to say about Airport Security and U.S. Customs, but I don't. The airport officials were very rude and screamed at us for 'not doing things right'. They just didn't realize we didn't do things right because we didn't know what we were doing. Neither one of us had much, if any, international flying experience. It was so funny, because I thought it would be difficult for me to get into Germany or Italy when I went through customs, but other than a quick look and stamp on my passport, I just walked right in. Then when I come back to America, that's when I'm put to the test! First we had to fill out a form on the plane stating everything we bought while in Europe,and, convert it to US dollars and state how much money we spent. If they thought you were bringing anything questionable into the country, your luggage would be searched. You basically couldn't bring any food back into the country or have said you visited a farm while in Europe. Then we went to the first round of security where they stamp your passport. That's the first time we were yelled at for not standing behind the yellow line. We never saw a yellow line. It was simply a marking in the tile, it was nothing anyone would know was a line. Then we had to pick up our luggage and go through security AGAIN. They even had drug-sniffing dogs. That's when I was screamed at by an official who accused me of skipping in line. Which I did not, but I dared not yell at her and have her 'detain me'. Then we had to recheck our luggage since we had a connecting flight to catch. I was so upset by the treatment we received at the George Bush International Airport in Texas I had a hard time getting over it. If I as an American Citizen was treated so rudely, I could only imagine how a non US citizen was treated. Oh, by the way, when the plane lands, the US Citizens are separated from the NON US Citizens, so I never saw if their treatment was worse than mine. I would have written a complaint about our treatment, but I didn't think anyone would care what I had to say.
When I finally arrived home at 2:00 a.m. the next day, there was a beautiful bouquet of flowers awaiting me on our dining room table with a note that read 'Welcome Home! We missed You!' It was the sweetest thing my husband and son had ever done for me. And you know what was even better? The house WAS CLEAN!!!! They did not leave a ton of dishes and laundry for me to do when I got back, and the entire house was neat and tidy. It just goes to show you two men really can take care of themselves when the women aren't around. However, they did eat a lot of pizza while I was gone! LOL!
Well I hope you enjoyed my tour of Italy as much as I've enjoyed sharing it with you. Have a good day, and STAY WARM! Amy 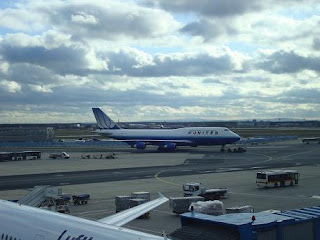