This is a continuation of a travel series to Wisconsin and Minnesota's North Shore.  To start at the beginning, go HERE.   The rest of the posts in consecutive order are HERE and HERE.
Split Rock Lighthouse
On Day Two of our trip to the North Shore, after spending the morning at Gooseberry Falls, we continued our drive on Scenic Highway 61 for another 7.2 miles to visit Split Rock Lighthouse.  The photo you see below is one of the most photographed spots in Minnesota;  and I can certainly see why!  Between the vast blue sky, the crystal clear water, and that amazing rock formation, the lighthouse on top is just the icing on the cake!  Gorgeous! 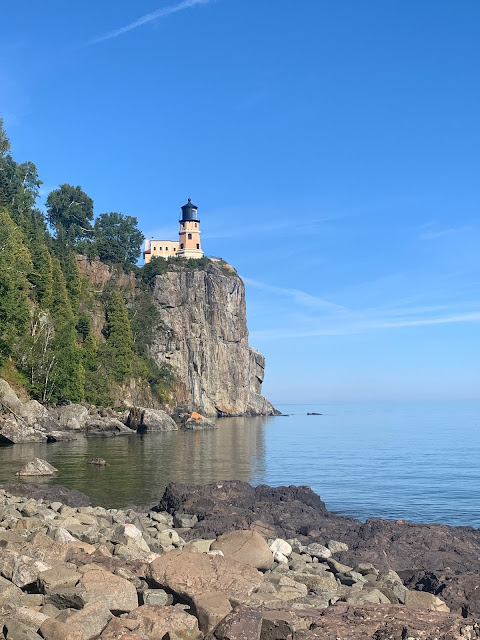 The Split Rock Light Station went into service in 1910 after a horrific storm in 1905 sank or damaged 29 ships on Lake Superior.  In 1969 it was decommissioned and deeded to the state of Minnesota for preservation.   Today it includes a lighthouse, a fog signal building, an oil house, three keepers' homes, two surviving storage barns, as well as sites where a boathouse and dock, a hoist and derrick, and a tramway were located.  A fee of $8.00 grants you admission to the grounds and inside the Lighthouse and other buildings.
Our first stop was touring the inside of one of the keeper's homes, which you can see to the left on the photo below. 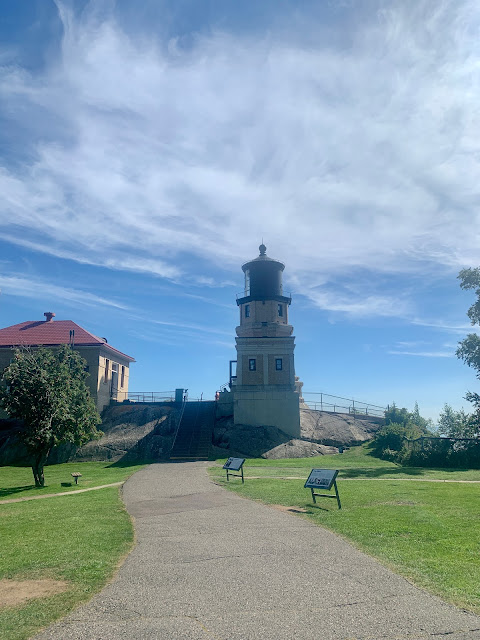 For whatever reason, I only took one photo of the inside of the home, but I remember thinking it was quite lovely and I said "I could live here!".  I'm sure you can find photos on-line if you're really interested.  The homes were very functional, but quite nice. 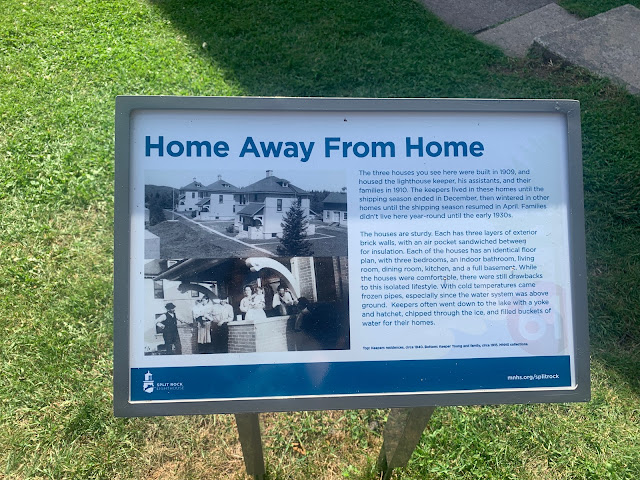 I did take a photo from inside one of the bedrooms.  Just look at the view they got to wake up to every morning!
All three homes are identical, so they only have one open for tours.  It is fully furnished and decorated.
The houses were home to more than 35 lighthouse keepers and their families during all the years the station was active.  Three keepers lived on site taking four hour shifts during the night to keep the beacon lit.
The station was closed during the winter and because it was far from any schools, the keepers and their families moved to town from January through March.  After the North Shore Scenic Highway was built past the light station in 1924, the keepers and their families were able to live there year round.
While we were visiting, we imagined what life would have been liked for the three families living there.  We could picture children playing together, and mother's working and supporting each other.  We think it would have been fun!  But I'd love to read some journals from these keepers and their families.  Were they ever lonely or bored?  I don't really know. 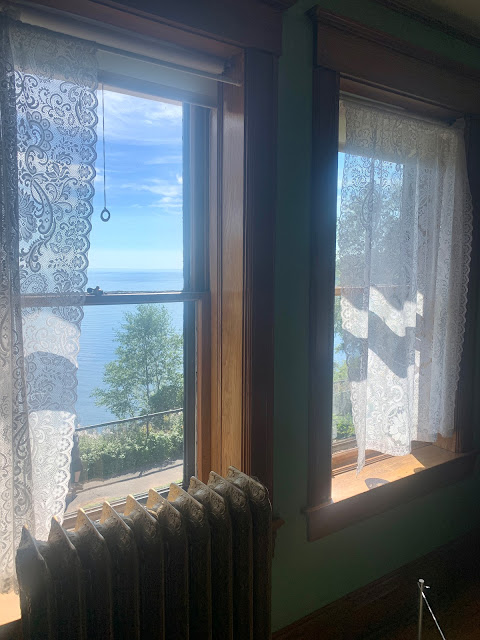 The lighthouse height is 54 feet.  The beacon height above Lake Superior is 168 feet. 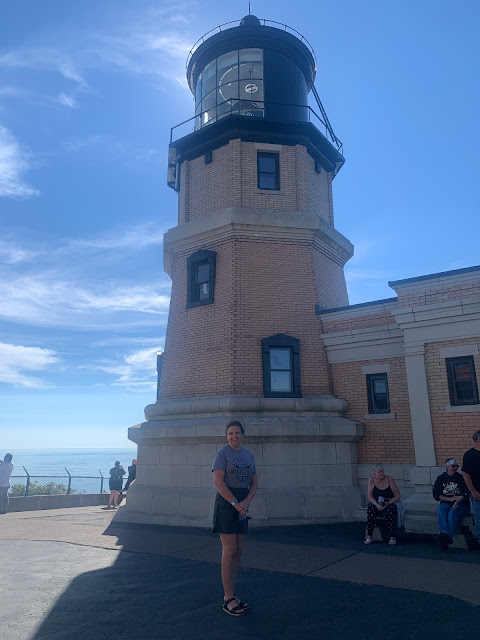 The light station mostly served freighters hauling iron ore that was mined in northern Minnesota and shipped out from the ports of Two Harbors and Duluth/Superior.
During it's first twenty years, the station was only reachable by boat, so everything needed to even build the lighthouse was brought to the site by boat. 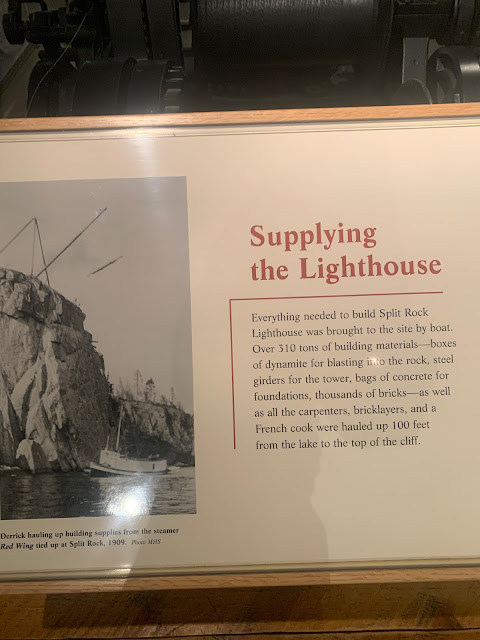 The views from the top of the lighthouse are breath-taking!  I can't even imagine having a job where you could look out and see this view everyday.  I wonder if it ever gets old. 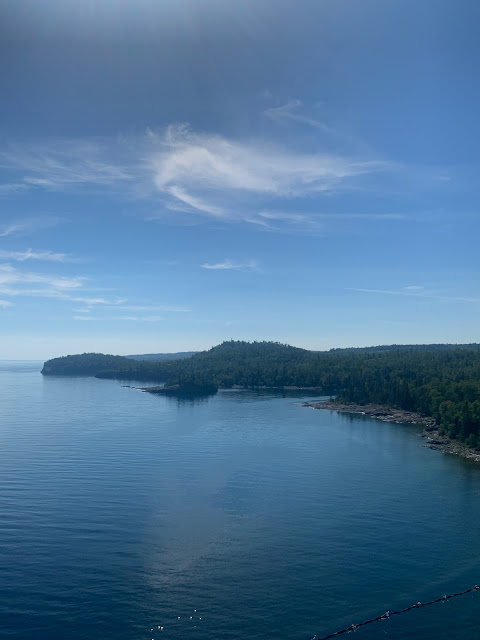 Although I have seen many lighthouses from the outside in my life, this was my first time inside a lighthouse.  I was pretty excited! 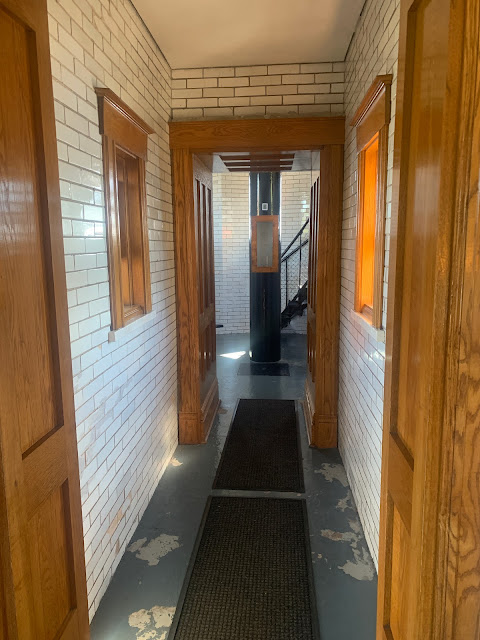 Although there have been renovations over the years, so much is still in it's original state like all this tiling!  Can you even imagine all the work it took to tile these walls in 1924? 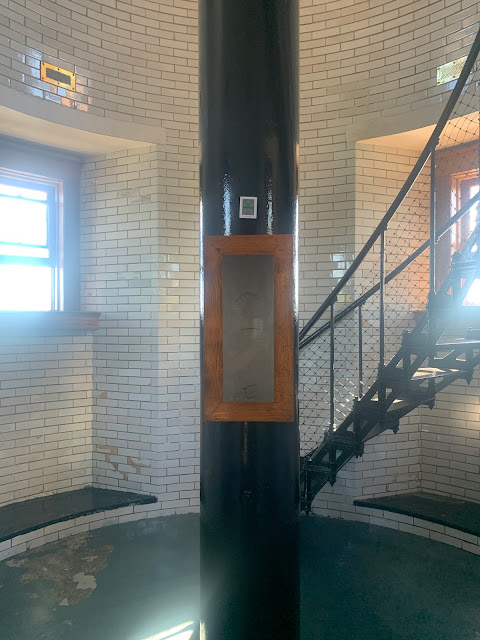 I couldn't believe they let visitors climb these stairs to the top.  Usually it's "unsafe".  How cool is this? 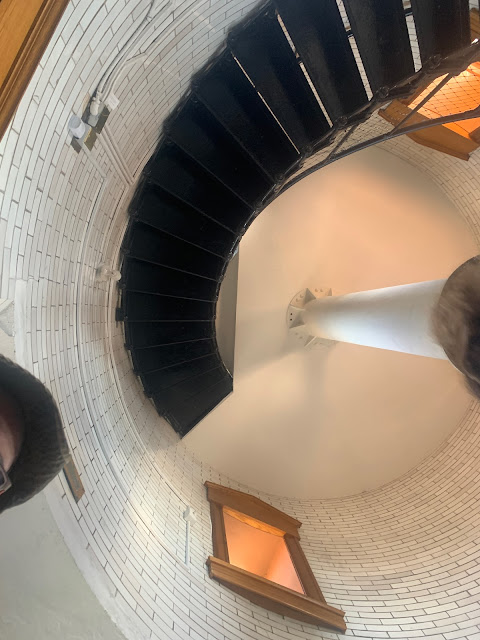 Thirty two steps takes you to the top! 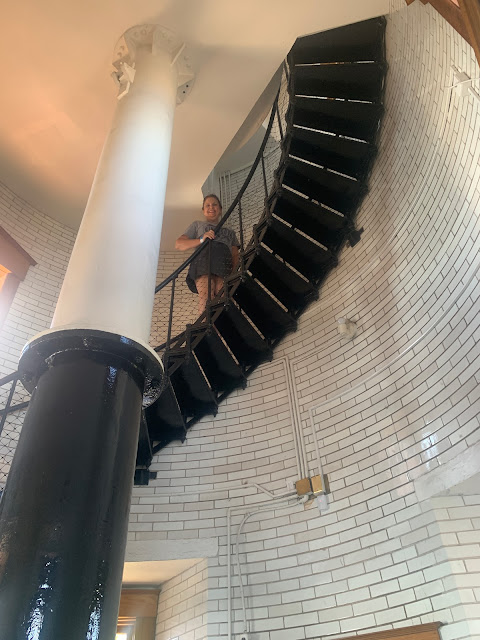 The bivalve Fresnel lens was built in Paris and weighs nearly 6.5 tons.  When operating, the lens made one revolution every 20 seconds, floating on a thin layer of mercury.  Gears are driven by wights on cables, like a grandfather clock.  Every two hours the weights had to be cranked back to their starting positions.  Light for the beacon was provided by a kerosene vapor lamp, which was replaced in 1940 by a 1000w electric light bulb.  The original fog horn is long gone, but they rigged up a digital version for the visitor's enjoyment.
The beacon range is 22 miles.

Split Rock Lighthouse is also a park where there are several nice hiking trails.  We wanted to get to the photos of the "Top 5 Places to Photograph the Lighthouse" so we took the 0.3 mile trail from the parking lot to the lake.  Because it's a state park, you have to pay to walk these trails, even if you don't even tour the lighthouse. 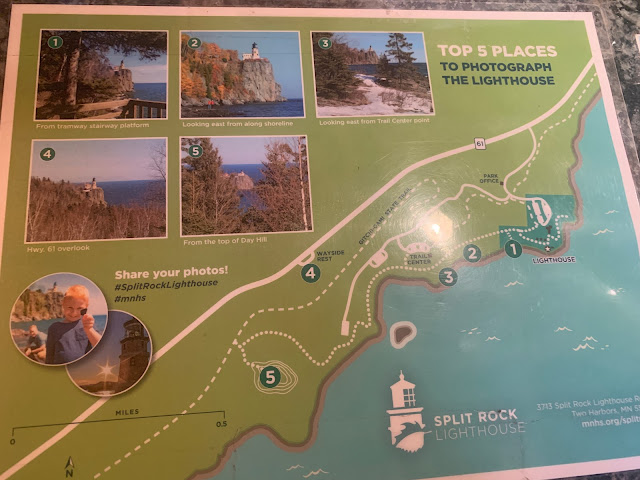 There are 171 stairs down to the lake.  At the top of the stairs are the ruins of the tramway building.  In 1916 a tramway replaced the hoist and derrick.  This inclined rail system ran uphill from the boathouse to the tram house.  A 5 horsepower gas engine pulled a small cart up the tracks by cable.  The tramway was taken out of service in 1934 when keepers were able to truck supplies from Duluth. 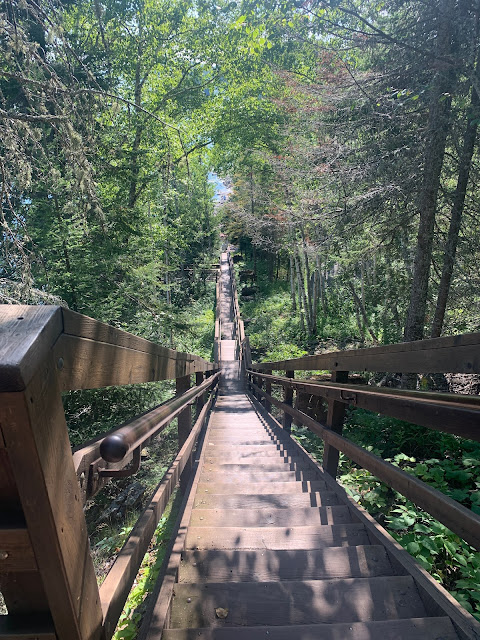 You can get to the lakeshore by taking the Tramway Ruins trail, which is a pretty path through the woods, or you can take the steps up and down.  We chose to take the trail down, but then took the steps back up as it was a shorter distance.  I did have to stop a few times to catch my breath! 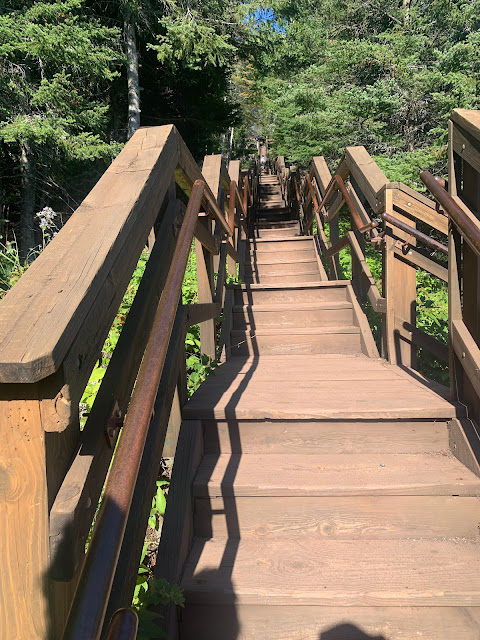 This is one of the views from the steps.  It's number one in "The top 5 places to photograph the lighthouse". 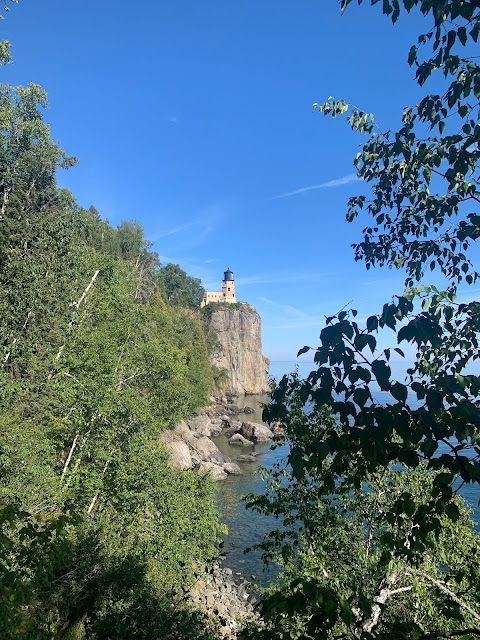 My favorite views were from the lakeshore.  Wowsers! 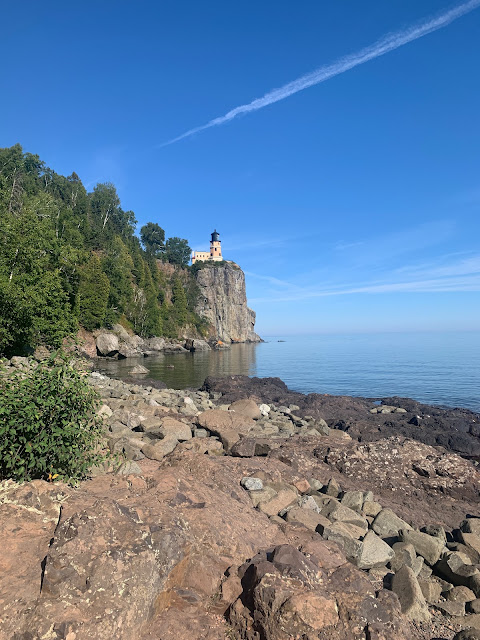 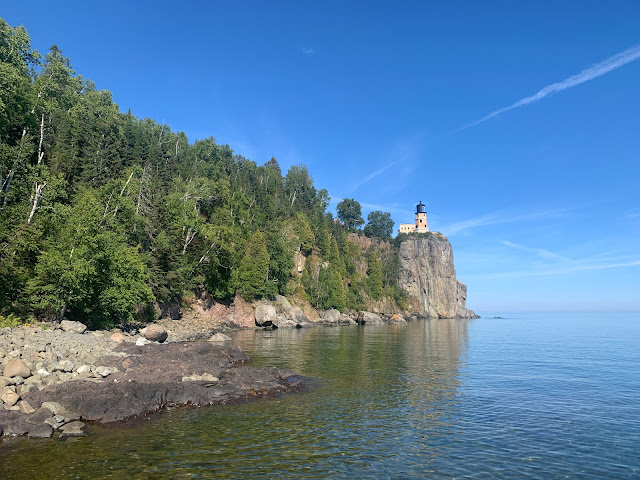 Of course we had to do selfies with this amazing background!  😀 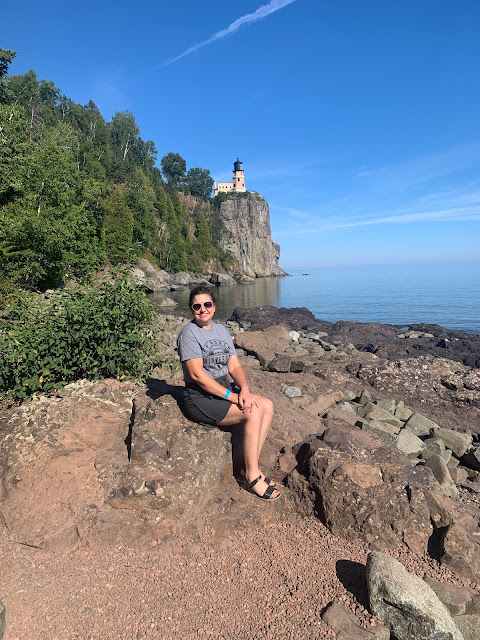 Black (Onyx) Beach
After our tour of the lighthouse it was back in the car for our last stop for the day:  Black Beach.  Some sites refer to it as Black Beach and others refer to it as Onyx Beach, why I don't know:  it's the same beach and it means the same color:  Black.
This beach is absolutely stunning;  almost other-worldly.  I felt at times that I wasn't even in Minnesota but in some other exotic country.
Black Beach is located in the city of Silver Bay, about 10 miles down North Shore Scenic Highway from the Split Rock Lighthouse. 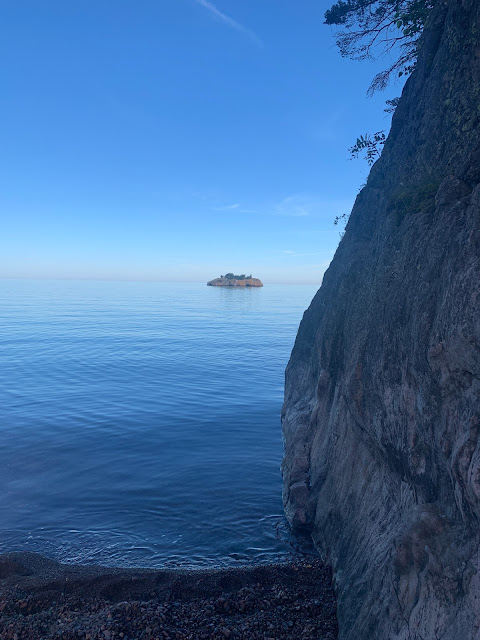 The beach is known for the fine black sand that lines the shore of Lake Superior.  It is bordered by jagged cliffs and rock formations that look so incredible against the blue sky and water. 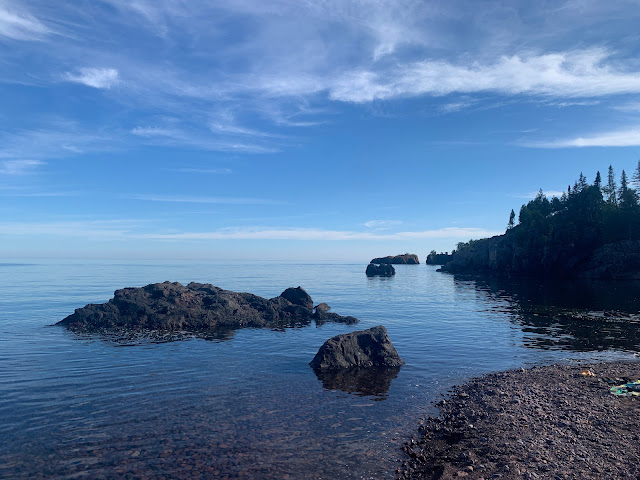 Although we did see swimmers there, I found the beach impossible to walk on barefoot because it is so rocky.  Even when I tried to walk in the water, my feet would sink a foot deep.  If you want to swim here, I would highly recommend water shoes! 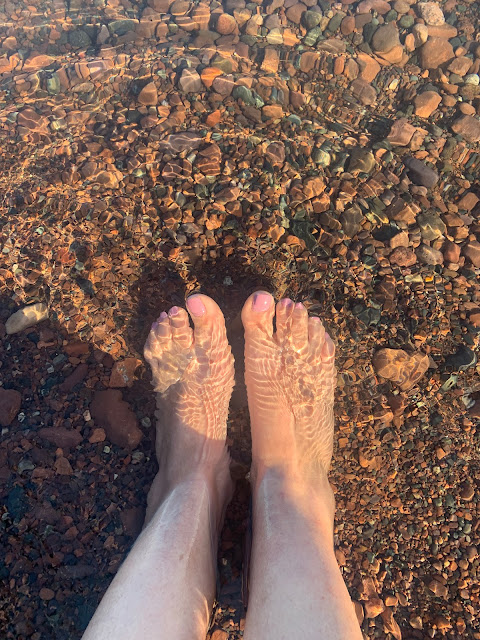 The black sand isn't natural, but the result of taconite, which was dropped into the water for years by mining companies and washed ashore by waves.   The tiny pieces of this mineral mixed with the sand to create an other-worldly phenomenon. 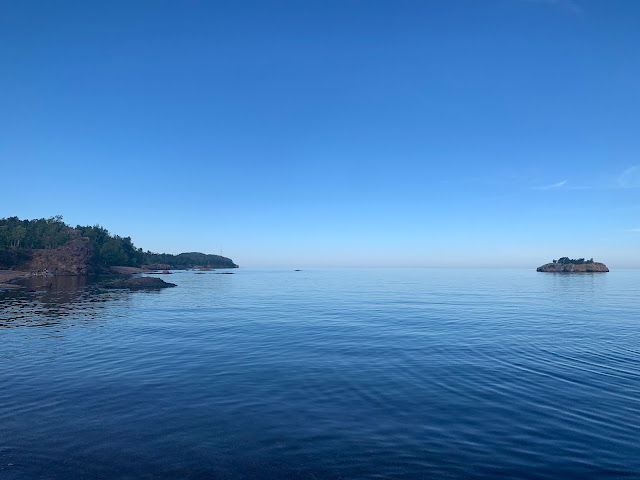 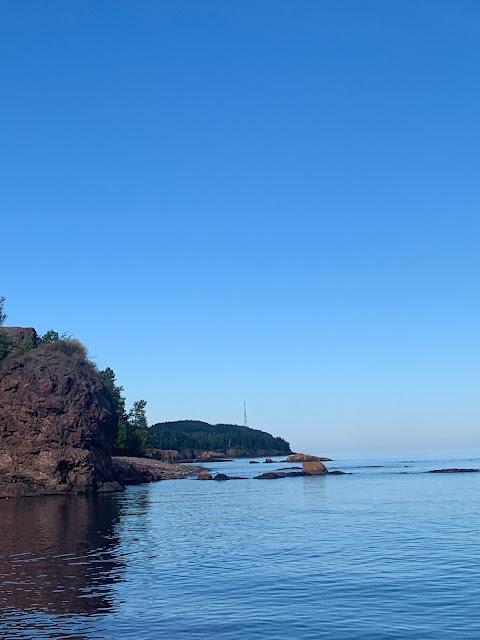 As I was putting this post together, I found out that there are two parts to Black Beach and I missed it!   The other part has the black sand.  You will have to google it if you're interested in seeing the black sand.  However, I think the part I was at had the best views for rock formations.  The other part also has a black sand strip you can walk on to reach one of the rocky islands.  I'm so bummed we missed it!  Oh well, it's not that far for us so we can always go back. 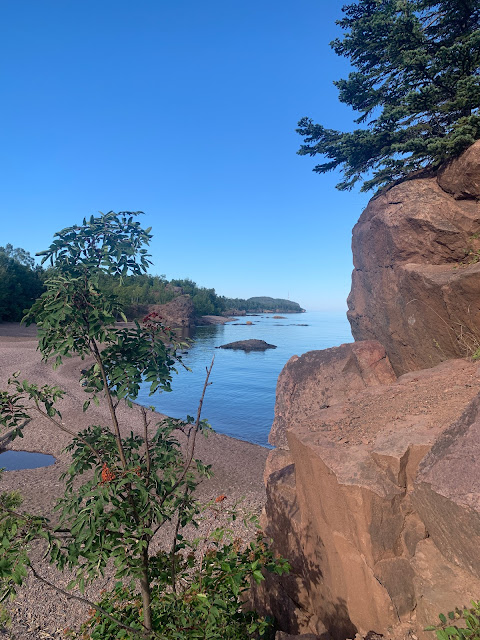 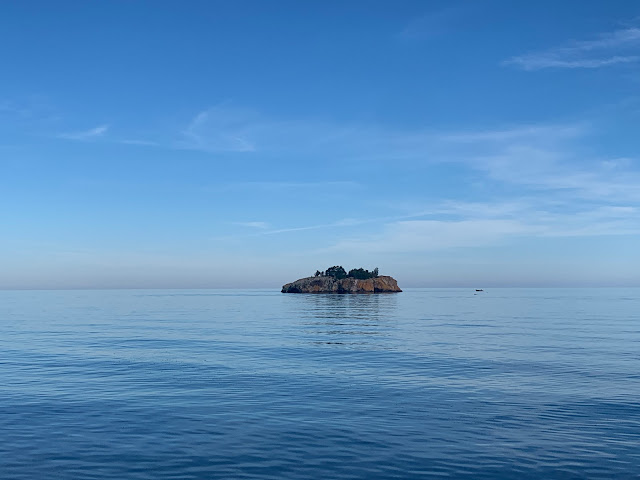 The parts of Black Beach we did see, were sure beautiful! FYI, most of the information in this post I quoted from the Split Rock Lighthouse Visitor Guide.  Oh, and I forgot to mention they have a great Visitor's Center at the Split Rock Lighthouse where you can watch a movie and see lots of displays telling you everything you need to know about the lighthouse and the surrounding area.
Have a Great Day!  Amy
Linking up with these Fabulous Blogs HERE!
Posted by Amy Johnson at 12:00:00 AM