This year my husband and I celebrated our 35th wedding anniversary.  Because of a huge home improvement project and another undisclosed reason (see this post HERE if you missed it), we didn't take a huge vacation but we did go to both Wisconsin and Minnesota's North Shore for a few days.
We have lived in our home for twenty five years, and have spent very little time visiting the North Shore, and I don't know why, because it is so close to home and the beauty is incredible.  I think we always feel we have to get in the car and drive for two days to see anything worthwhile, but that is so not the case as you will see today and in the next few weeks as I continue this travel series.
The North Shore is a huge area because it goes around Lake Superior and through three states.  You could never even cover all the ground in one vacation.  For our three day vacation we traveled to Bayfield, Wisconsin, where we took our boat tour, and then onto Duluth, Minnesota, and then to Sister Bay. 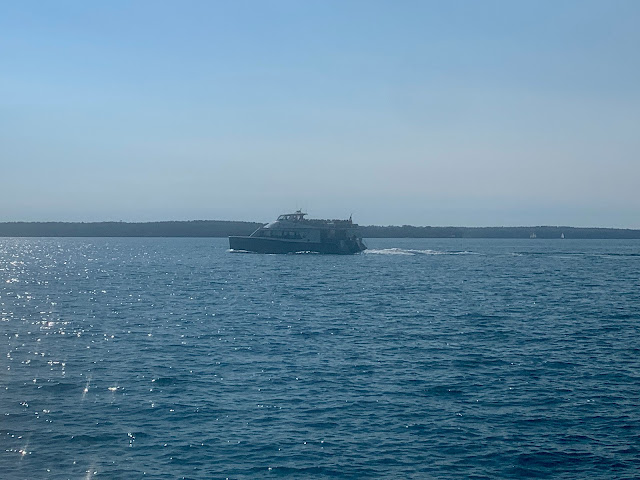 I've been to Bayfield several times before (see these posts HERE and HERE) but I have never taken one of their famous Apostle Islands Boat rides until now.  I always wanted to because I heard nothing but wonderful things, but for whatever reason I never made the time for it.  But because it was our 35th anniversary and we wanted to do something special, I made the time.

I wore my nautical tee "Always Go Overboard" just for the occasion.  It was a beautiful day with calm waters.  Everyone kept saying how rare it is to have such nice calm waters on Lake Superior. 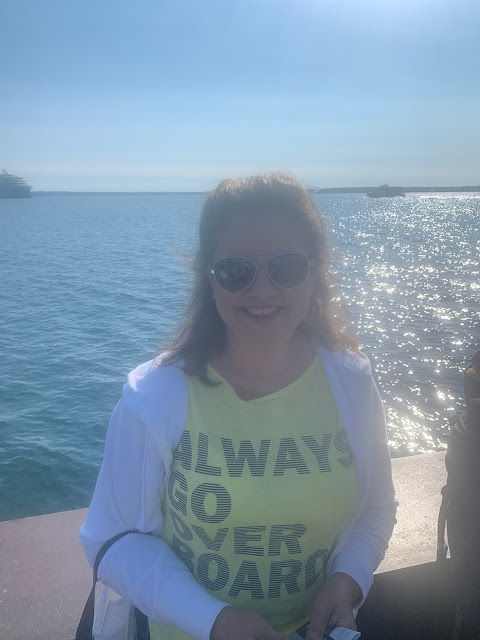 We had a man sit in front of us who had on a sweatshirt of the Apostle Islands.  We took advantage of his map as the tour guide identified each island on the tour as we passed by. 😀 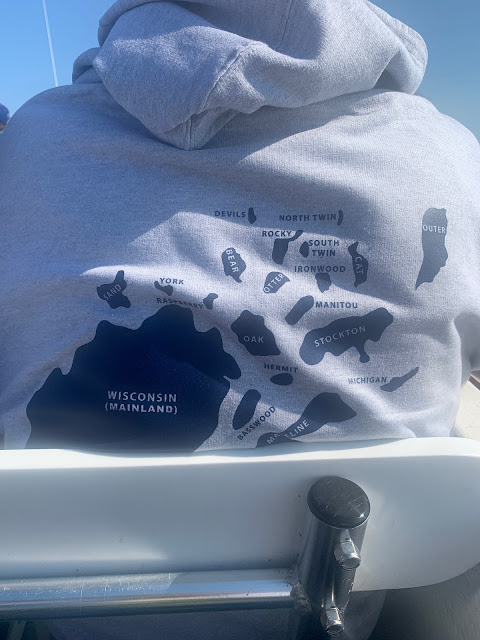 The Apostle Islands are a group of 22 small islands in Lake Superior near the city of Bayfield, Wisconsin. They are famous for their sandstone cliffs, sea caves and stacks, windows and arches, and lighthouses. 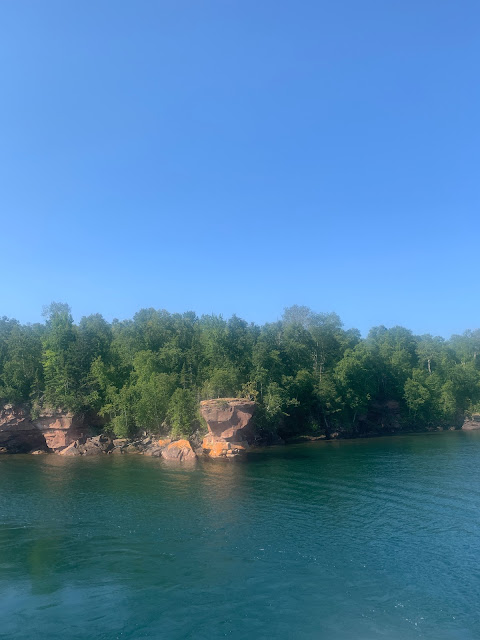 The boat tour is about 2 1/2 hours long and there is an upper and lower deck.  It was a beautiful, warm sunny day so we sat on the upper deck. 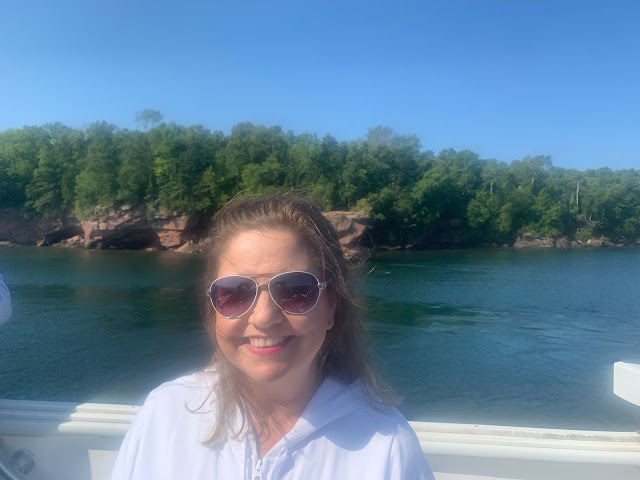 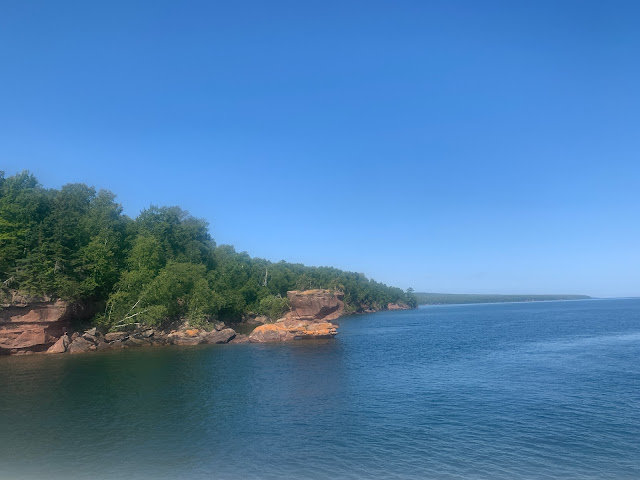 This is an example of "Windows and Arches".  Waves, freezing, and thawing undercut rock  and windows and arches form.  They will last until the rock framing them collapses. 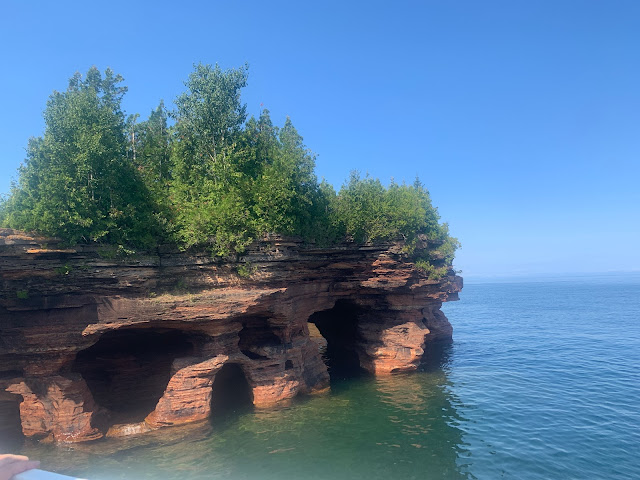 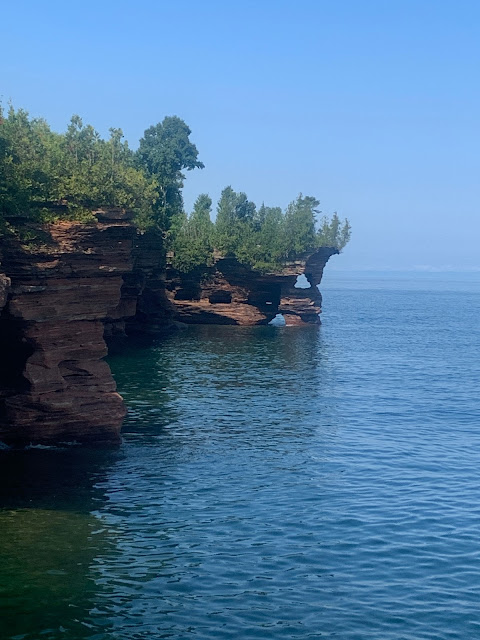 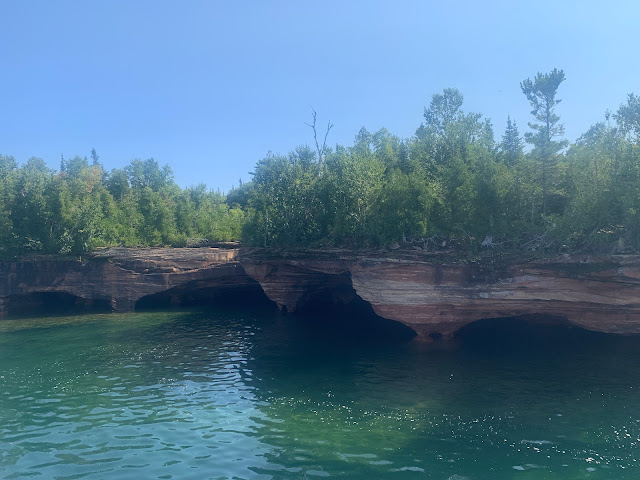 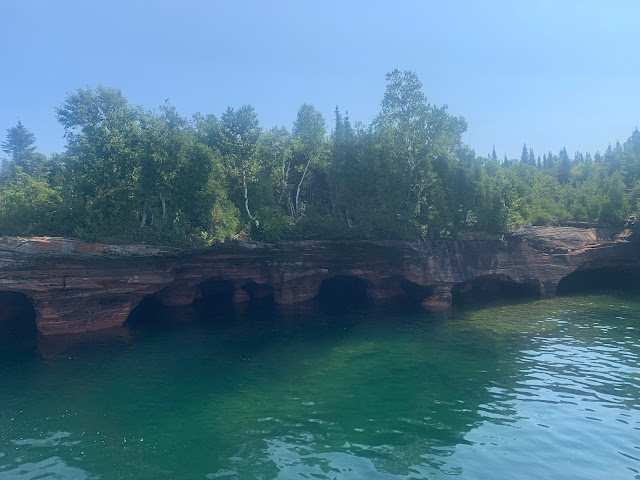 Here's a short video of the sea caves: 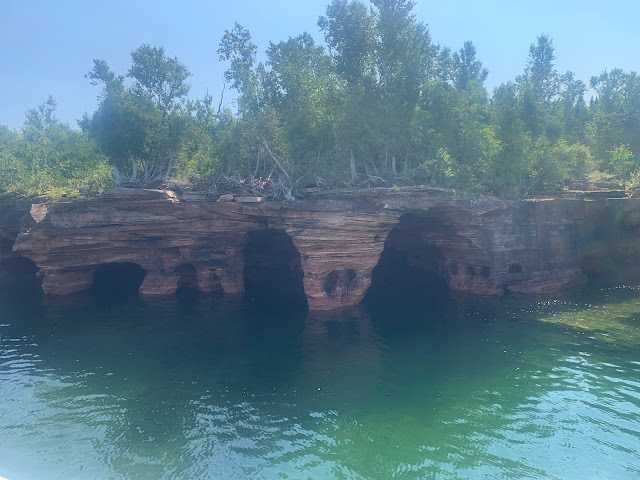 There are seven lighthouses in the Apostle Islands, but I only remember seeing two of them.  This one is Devil's Island Lighthouse. 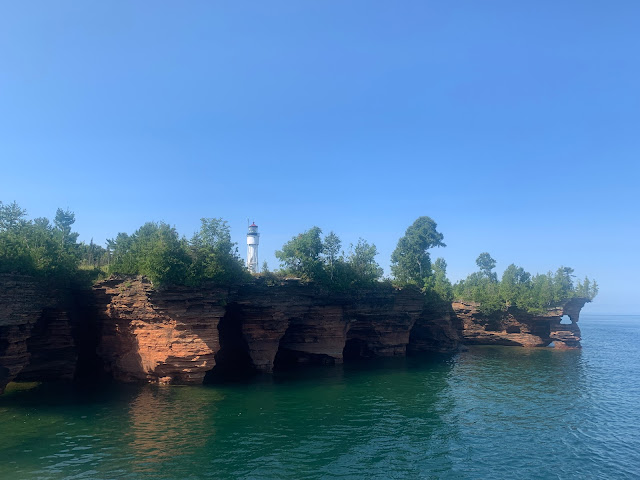 There are other tours from Bayfield that you can take which stop on some of these islands and you can get out and tour the area. 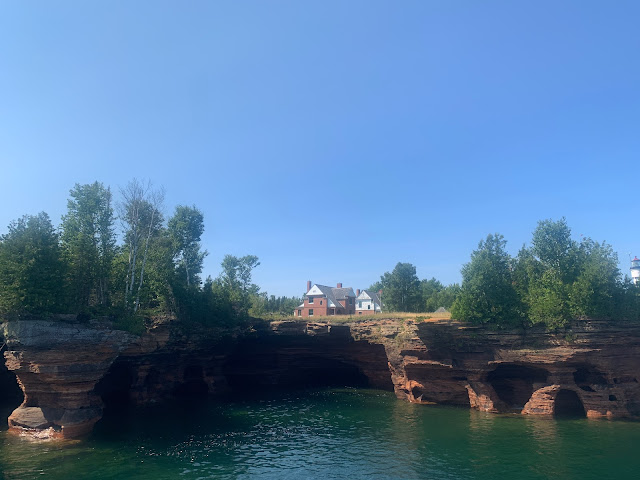 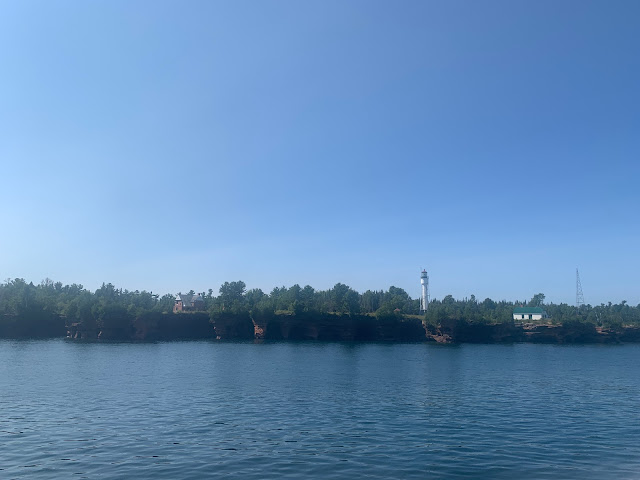 This may not look like a lighthouse, but it is.  Notice the top of the white building?  That's the lighthouse.  This one is called Raspberry Island Lighthouse. 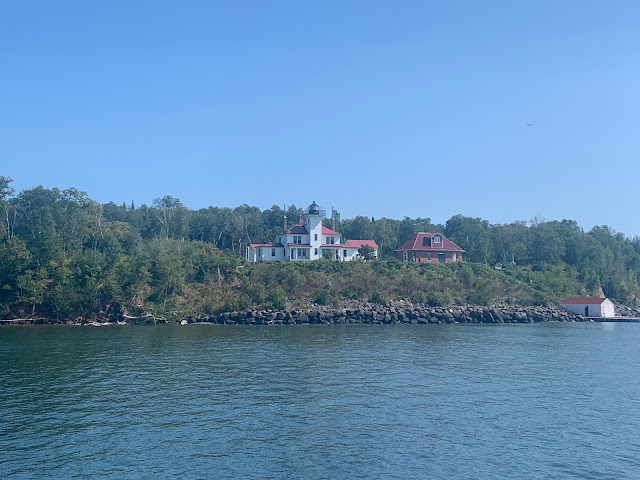 You don't go past all the islands on the tour, or you'd be out on the lake all day.  After two and a half hours, I had enough anyway.  I think we saw about six islands up close and viewed the others from quite a distance.
Below is the town of Bayfield. 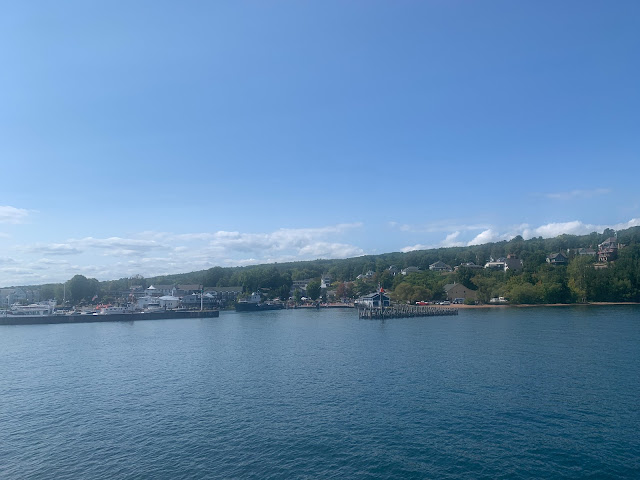 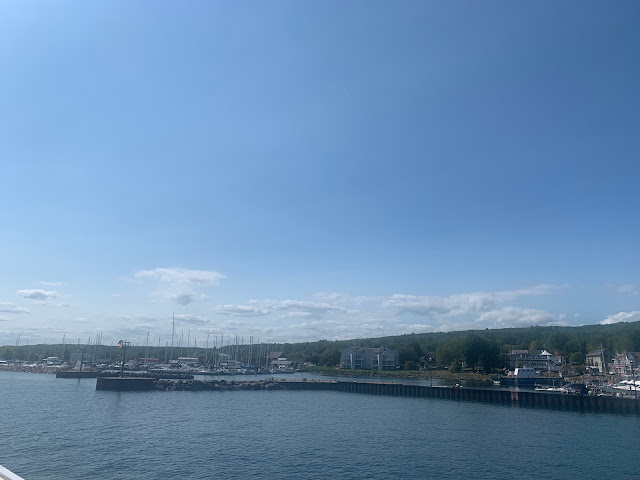 After our boat tour, we were starving so we had lunch at a restaurant right in the town of Bayfield.  All the restaurants serve fish right out of Lake Superior, so that is what we both ordered for lunch.  The fish was so fresh and delicious!
After lunch we got back in the car and started heading to Duluth, Minnesota where we would spend the night.  On the way there we saw this cute little fishing town so we stopped to take a peek. 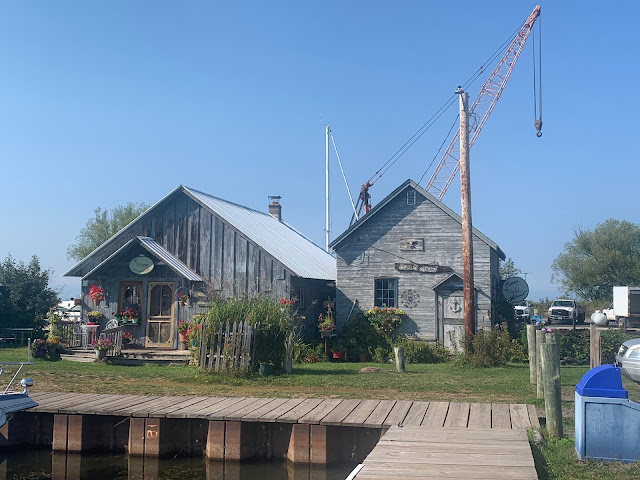 All these buildings were little gift shops but unfortunately they were already closed for the season.  I did enjoy walking around outside though and got lots of cute ideas. 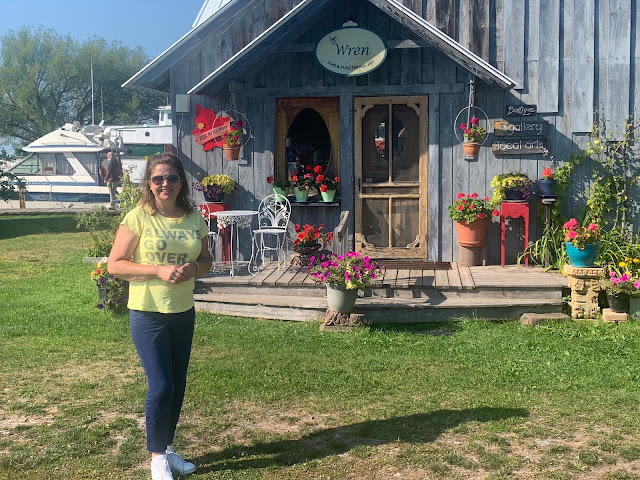 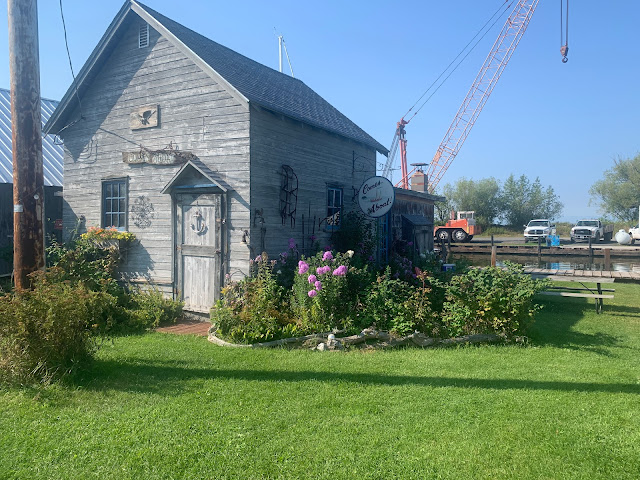 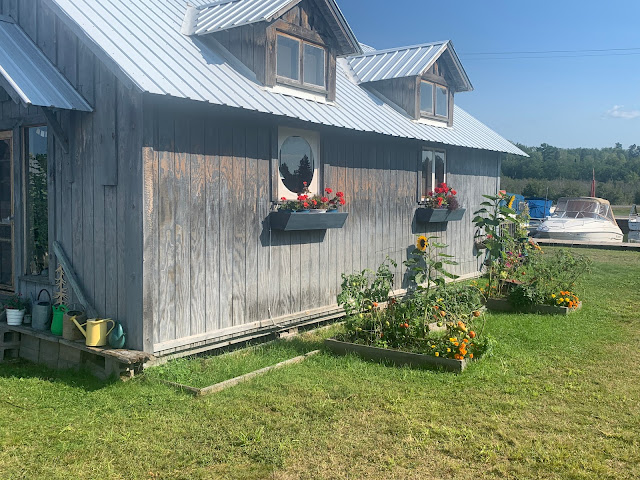 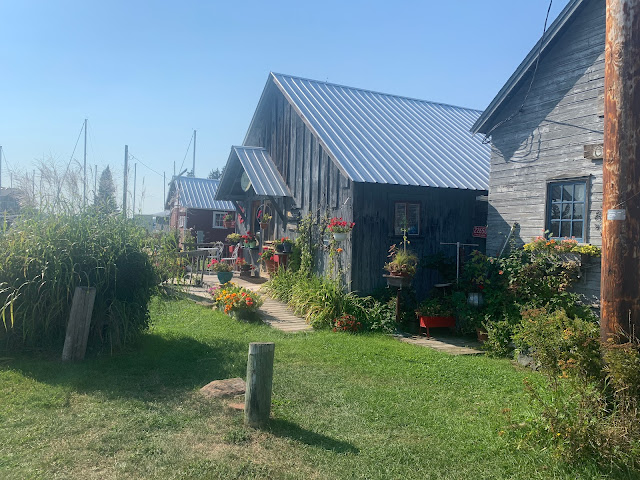 Duluth Minnesota is only about three hours from my house, we have been there many times before but it's always a treat to go there.  They are famous for their lift bridge which is very unique because it doesn't open like most water bridges do but it lifts up.  I did this video of it years ago.
After we checked into our hotel, we walked across the lift bridge to walk around Canal Park and get some dinner. Canal Park is a beautiful spot in Duluth with a lovely river walk and it has loads of nice restaurants and gift shops. 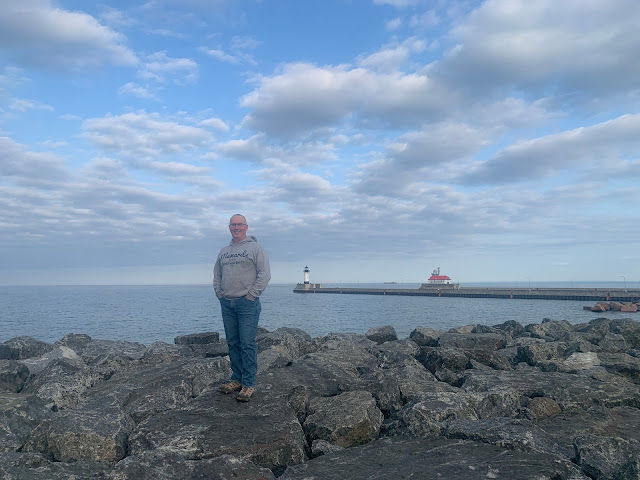 There's a popular spot on the shore line where teens like to swim out and dive off of called "The Cribs".  They swim out to this over-turned old dock, and into one of the openings, then they climb up to the top and dive off.  It looks so dangerous to me, and there have been deaths and it is "unapproved" to swim there, yet they do it anyway.  Every time we are in Duluth, we see teenagers diving off of "The Cribs".
After watching the teenagers risk their lives, we continued on our walk.
Of course we had to take a 35th wedding anniversary selfie. 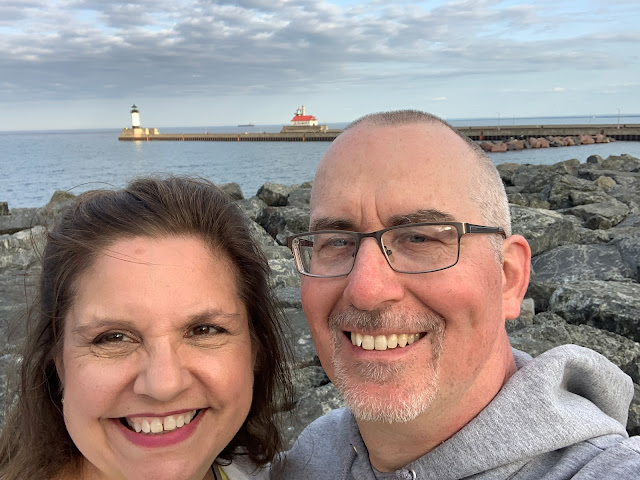 We were both still stuffed from our late fish lunch, so we split a fajita dinner at a Mexican restaurant.  We ate outside, in the warm moonlight.  It was so romantic.

I will be continuing this travel series for the next three or four weeks as there was a lot more to see and do on Wisconsin and Minnesota's North Shore.