If you've noticed my absence from Blogland, it's because I took a week off to celebrate Easter weekend with my family, then we headed to Virginia for four days of hiking in Shenandoah National Park.  I already did my first travel post on Shenandoah HERE, and I decided to share my Easter weekend in a separate lifestyle post today.
It's super hard to get all the grandkids to cooperate at the same time for family photos, but I did manage to get one snapped of me with Alethea and Atticus wearing our Easter outfits.  As usual, I was planning on wearing a pretty Easter dress Easter Sunday, but it was only 38 degrees when we left for church (55 degree high for the day) so I chose white pants and this embroidered yellow top instead .  Apparently though I ended up one of the only women who dressed appropriately for the weather, because it seemed everyone I saw had bare legs and sandals on.  BRRR.
Easter Sunday Outfits 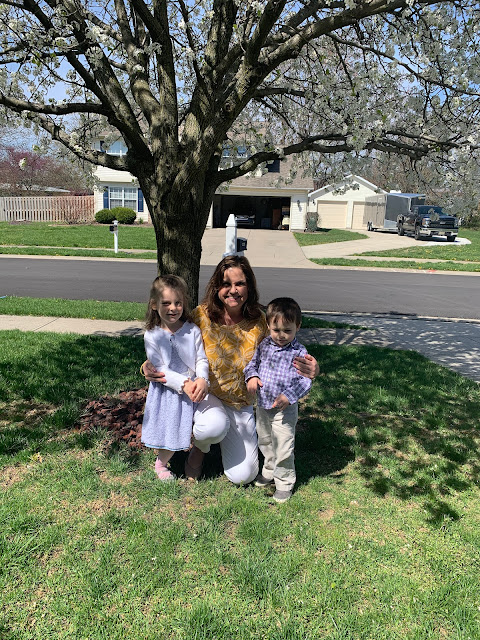 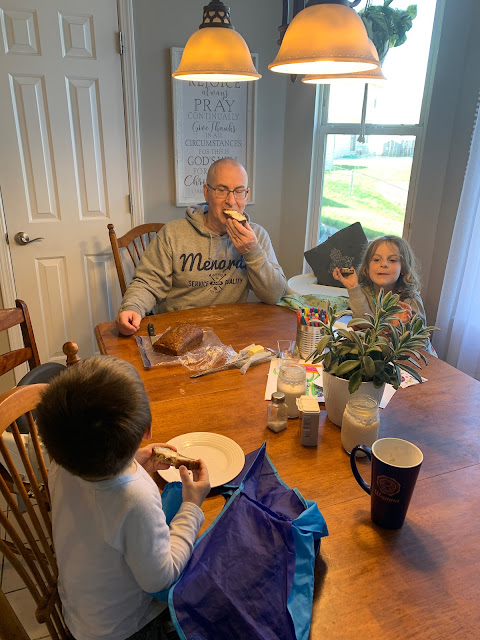 Every family has traditions, one of our's that developed quite naturally and was never planned is "Eating zucchini Bread with Grandpa Todd".  It all started because like most gardeners I have more zucchini than I can consume.  So all summer long, I would bake zucchini bread.  I would make two loaves and eat one loaf right away and freeze the other loaf.  By the end of the summer you can just imagine how many loaves of zucchini bread are in the freezer.  Well, one way to get rid of it, is to always take a loaf with me when I visit the kids/grandkids.  This past February during my winter visit, I brought a loaf of zucchini bread.  And as we were eating it Atticus said "We ate zucchini bread with Grandpa Todd too!".  Grandpa Todd hadn't been to their house since last Easter.  I couldn't believe a two year old could remember something that happened a year earlier!  It must have really meant something to him to remember that, so I established a new tradition of "Eating zucchini bread with Grandpa Todd" every time we're together. 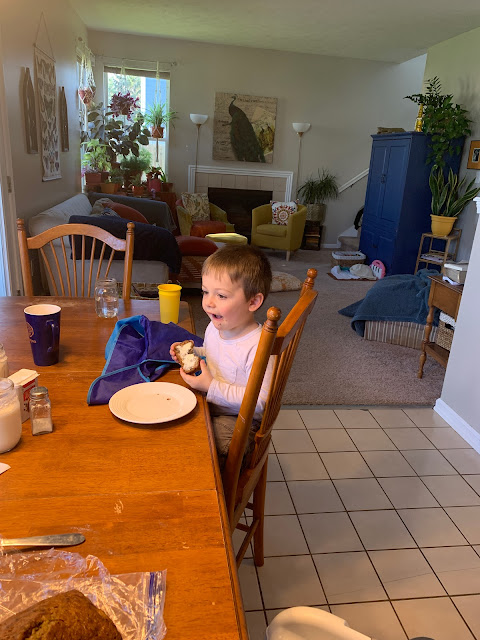 Another funny story about the zucchini bread was Alethea's statement "I don't like zucchini, but I LOVE zucchini bread!"  Hmm, I wonder if it has anything to do with the sugar?
Playing On The Playground 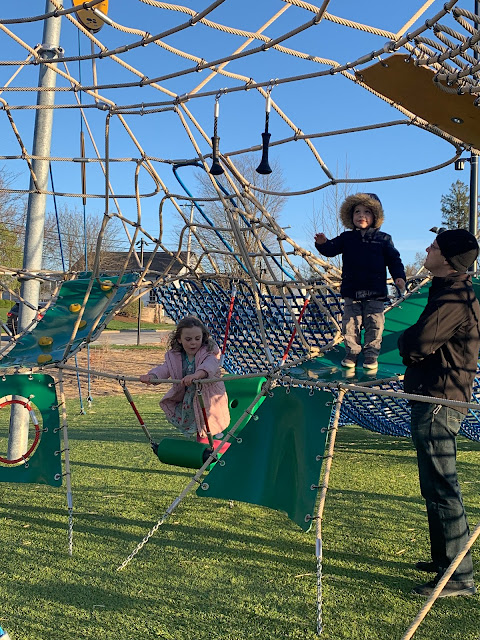 After spending eight hours in the car to get to Indiana, we were anxious to stretch our legs, so we walked to a new local park.  This park is not a traditional park.  There are no slides or traditional swings, everything is meant to be climbed on.  We're not quite sure how we feel about it as it's not really safe for younger kids and seems more appropriate for young teens. 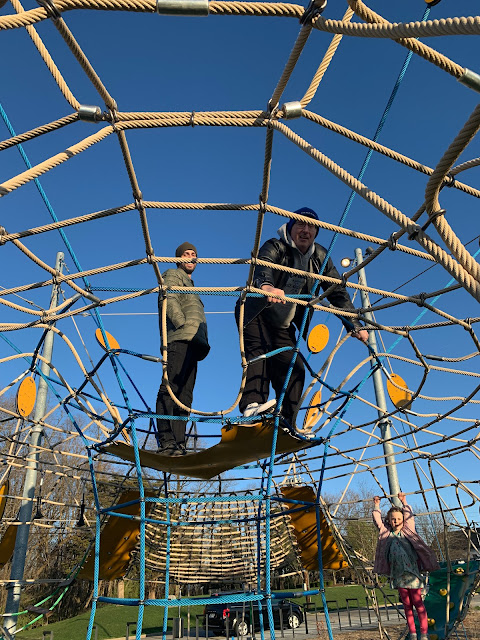 Well of course, all the adults had to get on the equipment and play too.  While I was climbing the rope I remembered my last vacation and how I had injured myself on the first day climbing a ladder.  That injury haunted me the rest of my vacation, so I didn't want that to happen again and I quickly got off the ropes.  I no sooner had that thought when my hubby rolled over on the top of the rope and one of the metal hinges that holds the ropes together struck him hard in the hip tearing his pants and giving him one of the biggest bruises I had ever seen.  I could not believe it!  I was really worried about him on our vacation because the bruise kept getting bigger and bigger and he was complaining of hip pain.  But I googled it, and determined the bruising wasn't in a worrisome part of the body so we tried to put it out of mind.  Eventually it did go away and all is well, but wow! What irony!  Maybe us old people need to just stay off the playground equipment. 😁 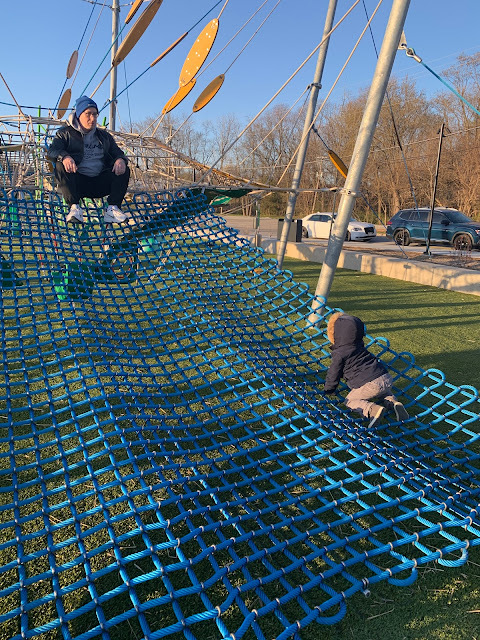 Atticus just loves and adores his Grandpa Todd.  It's so heart warming seeing the special connection these two have. 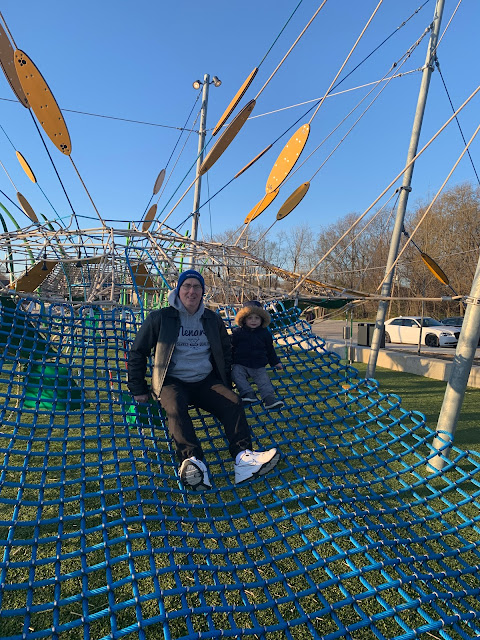 Grandkids Opening Up Their Easter Baskets
We decided to let the kiddos open their Easter baskets on Saturday evening after dinner since we already had a full day's of activities planned for Sunday.  If you want to know more details about everything I put in their Easter baskets, be sure to check out THIS POST. 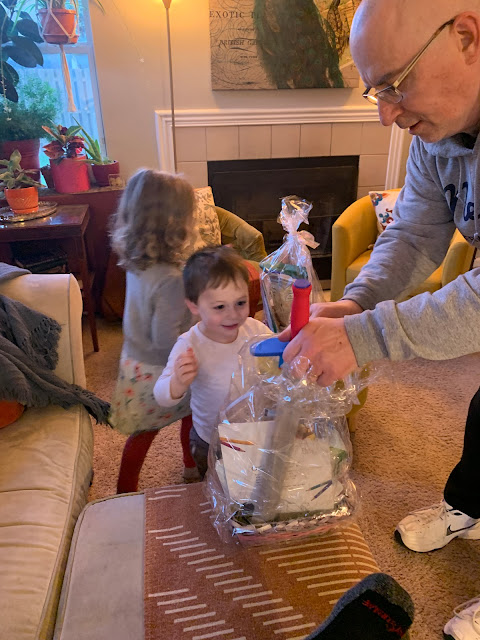 Atticus was so excited when he saw that his Easter basket contained a sword! 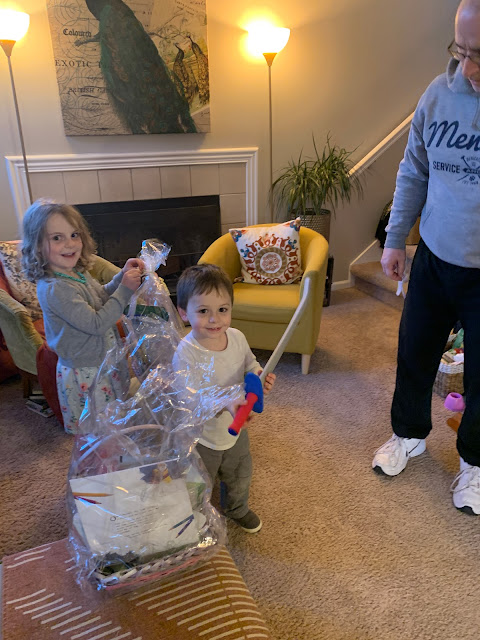 Of course he immediately started to re-enact the David and Goliath story. 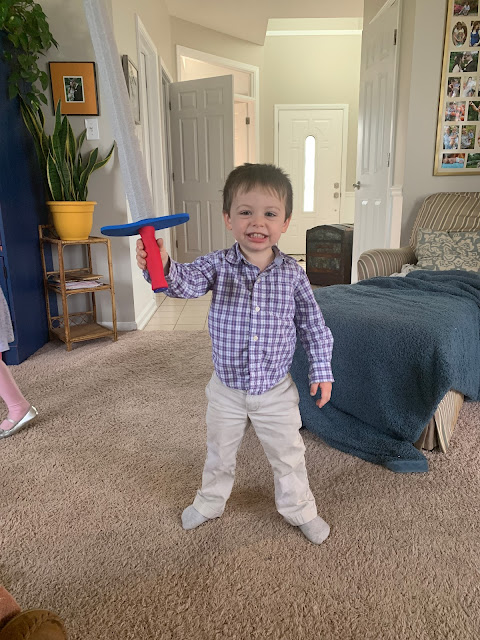 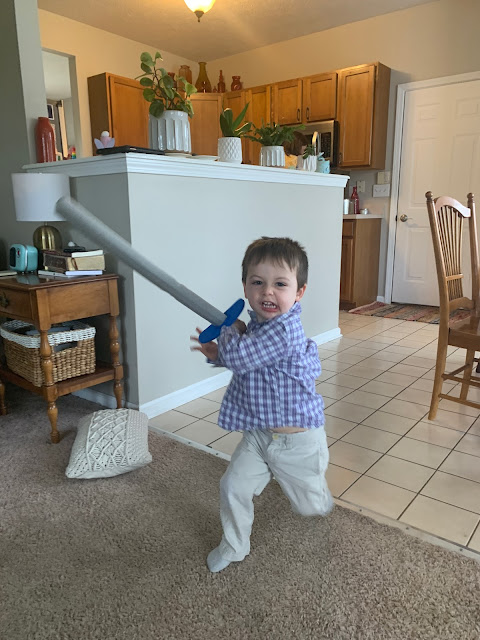 I think Alethea's favorite item was her ballerina outfit.  She wanted to wear it so bad that instead of saving it for a warmer day, she wore it to bed as pajamas. 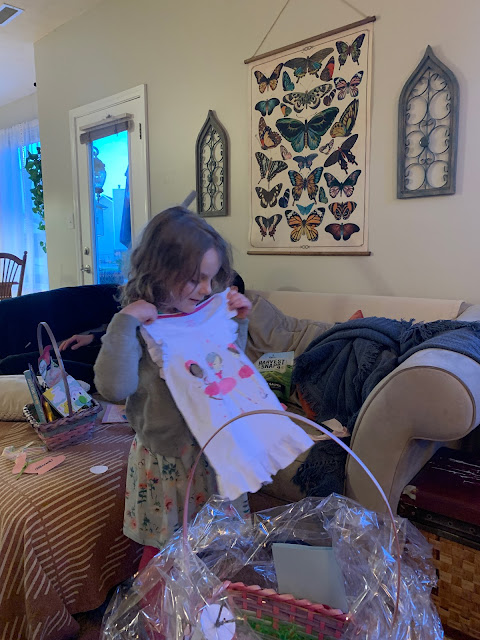 And the Dove dark chocolate bunny was their favorite thing to eat!  Who can blame them? 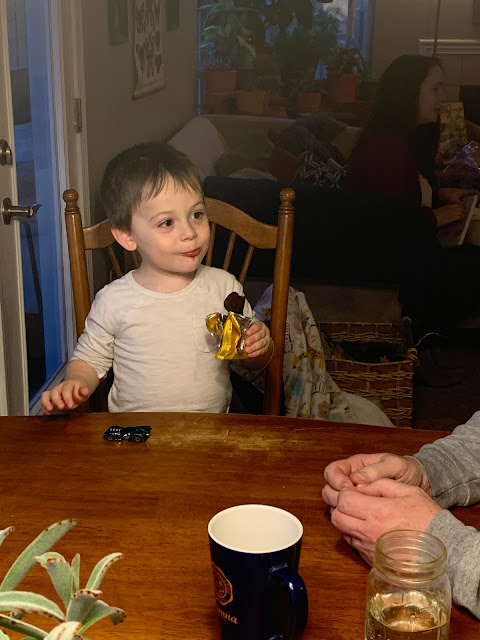 Easter Morning
Easter Morning Elisha and I were waiting for everyone else to finish getting dressed.  He was in such a good mood I had Grandpa Todd snap a picture.  I love Elisha's infectious smile. 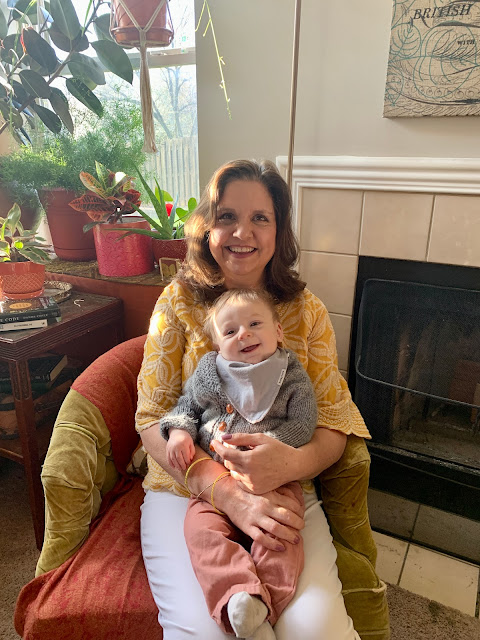 Ashley and Jason's church served an AMAZING Easter breakfast!  Free of charge too...no donations asked.  I was so impressed and thought:  "Now this is a good idea, why don't more churches do this?".  The men of the church made and served the breakfast...another great idea!  The women can get all the kids dressed and looking pretty in their Easter best while the guys cook.  It's was just wonderful because most people have family over for the weekend or their trying to get their Easter hams in the oven, and it just makes it so much easier on everyone to have breakfast provided on church.
I love how every table had a different pastel colored table cloth and there was a lovely vase of spring flowers too! 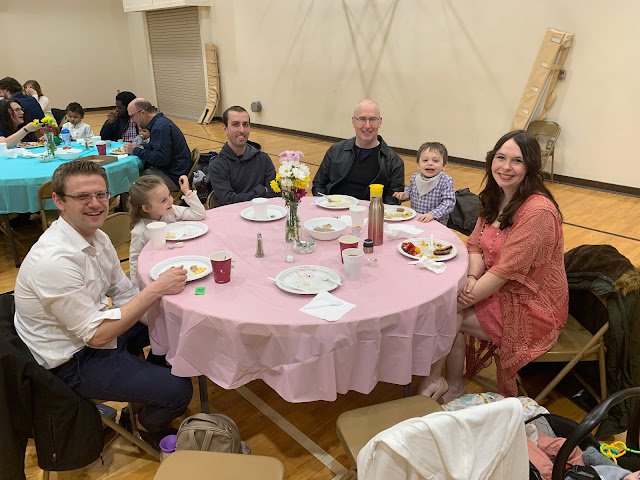 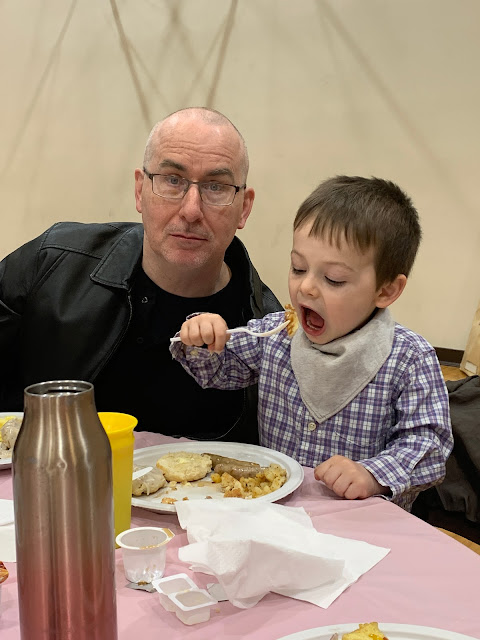 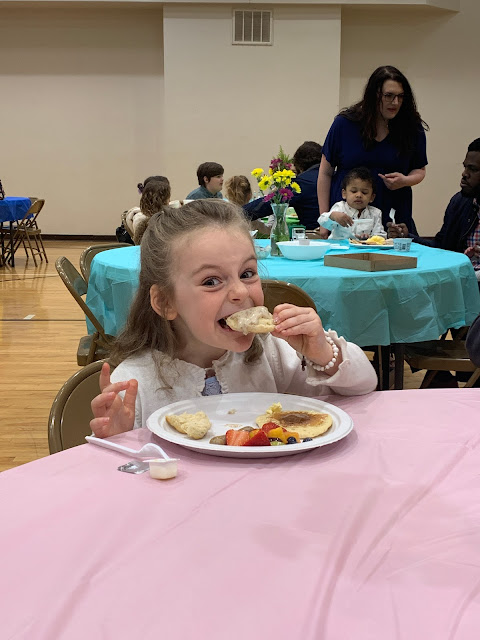 Elisha is still not crawling, but he is definitely lifting up his head & chest well and rolling around. 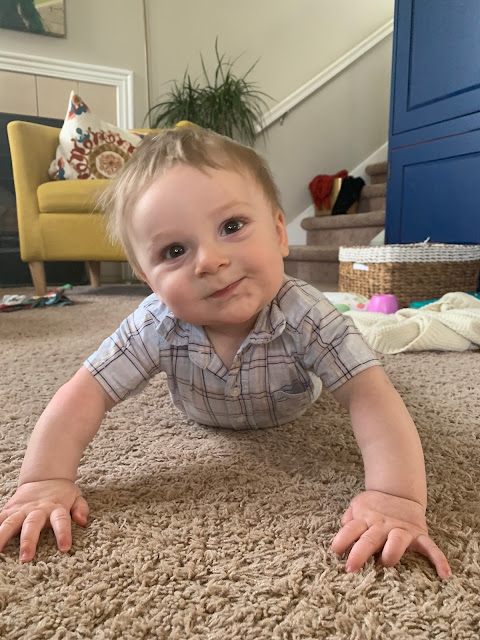 He is the cutest baby ever, and he may be our first red head.  I thought, if his hair stays red, we will have a blond, a brunette, and now a red head!  How fun! The Easter Egg Hunt
Although the weather was in the fifties in the afternoon, there was still a cool wind so we decided to have an indoor Easter egg hunt.  The kids seemed to really enjoy it and we think it was actually harder for them to find the eggs inside the house than outside.  You can see the Easter egg hunt in the video below.
The Drive To Virginia
Monday morning we woke up and were surprised to see snow!  We couldn't believe it! How could it be snowing when it was 55 the day before?  But it was snowing and we had a nine hour drive to Virginia.  😢. We thought, well maybe when we drive further east we will get out of it.  Nope.  Although we did just hit rain in some areas, it was a constant mixture of either snow, rain, or slush.  What was suppose to be a nine hour drive ended up being eleven because of the weather conditions.  Who would ever think there would be snow in the southeast at the end of April? 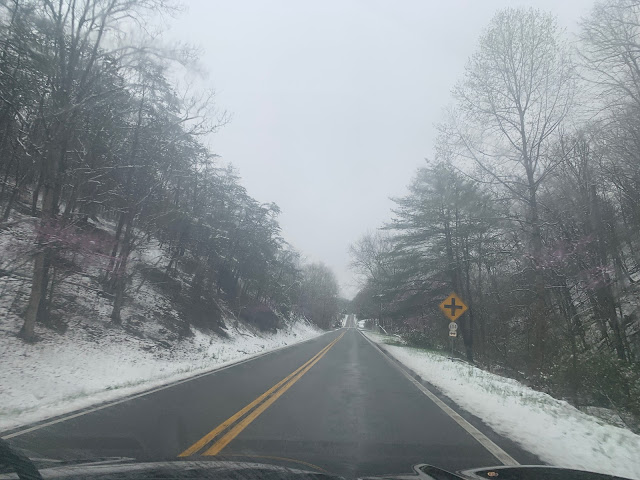 By the time we hit Maryland, we hit ice!  It was no longer on the road (thankfully we missed when that storm started) but it was still on all the trees, electrical wires, etc.  In the photo below, that is ice on all the branches, not frost. 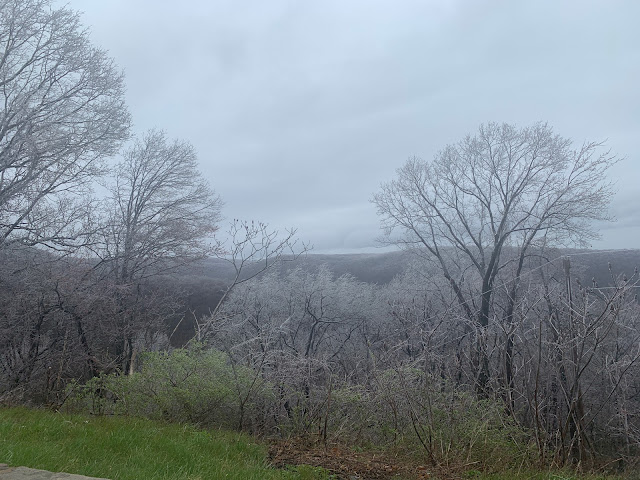 We were so happy and relieved when we arrived at our hotel safely.  After checking in, we went to a local diner to enjoy some pizza!  All was well with the world again...until the next day when we found out the park was closed.  😂. I won't say much yet as you will find out more in all the travel posts to come, but it was one of those vacations where so much went wrong.  It got to the point, where all we could do was laugh.  There were a couple of times I laughed so hard I couldn't breathe.  But in the end, we determined it really was a nice vacation, in spite of everything that went wrong.  And maybe, just maybe, we were making too big of a deal out of other things that went wrong because the vacation had started so badly. 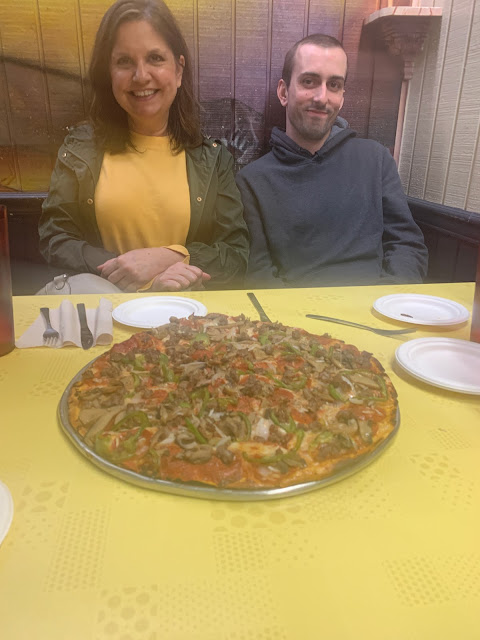 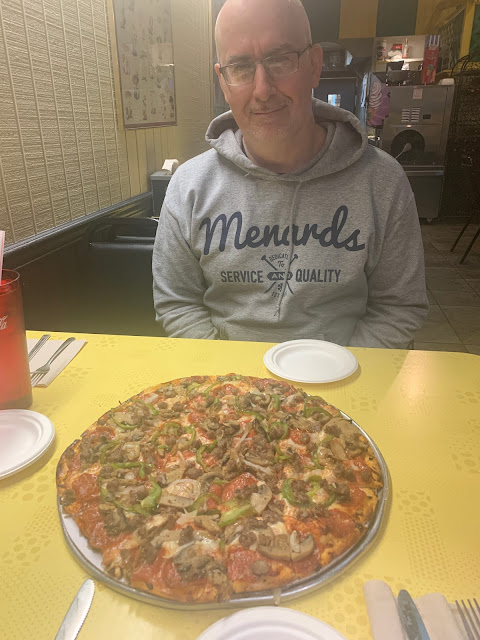 I hope you enjoyed reading this lifestyle post.  I don't do them all that often, but I know some readers have expressed more lifestyle posts so I'm going to try to write more when I can.
Have A Great Day!  Amy
Linking Up with these Fabulous Blogs HERE!
Posted by Amy Johnson at 12:00:00 AM