This is a continuation of a travel series to The Great West.  To start at the beginning, go HERE,, HERE, and
HERE, and HERE!
On day three of our vacation out west, we left Spearfish Canyon and started our trek to Medora, North Dakota.  But first, we decided to make a stop at Devil's Tower National Monument in Wyoming. 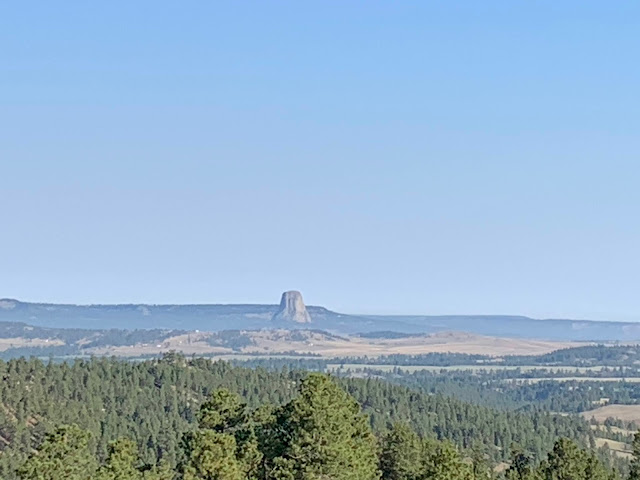 The drive to Devil's Tower is so beautiful.  Wyoming is such a gorgeous state and one I hope to explore more some day.  You can see Devil's Tower for miles and miles before you even reach it, it is that tall!  In fact, if you don't want to pay the park fee, you can easily see the tower and take pictures of it from the road.  Both the picture above and the one below were taken from outside the park. 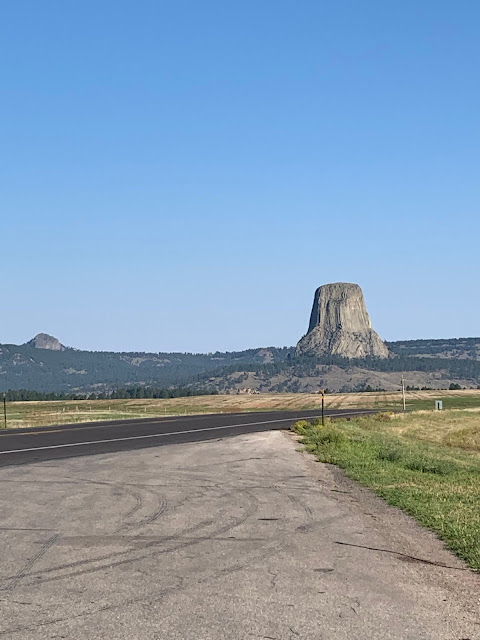 I really think it's worth going into the park and seeing it up close, especially if you have a National Park Pass or if you plan on visiting another National Park during the week.  We purchased a seven day vehicle pass for $25.00 and it was good at all national parks and monuments. 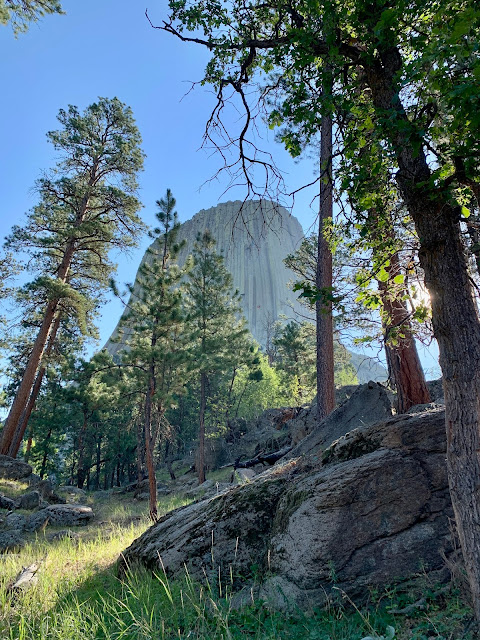 Parking is very limited at the monument, so get there early!  We got there just as the sun was rising and it was already filling up fast.  I have no idea why they don't have more parking!
If you thought the monument looked huge from outside the park, it is really impressive when you get so close to it!  There is a paved path that winds it way around the tower.  Along the way you can learn all about the geologic features and the history of the area.  The path might seem short, but it took us all morning to walk around. However, we stopped a lot, reading everything, and taking lots and lots of pictures.  The "Tower Trail" is a 1.3 mile loop  around the monument. 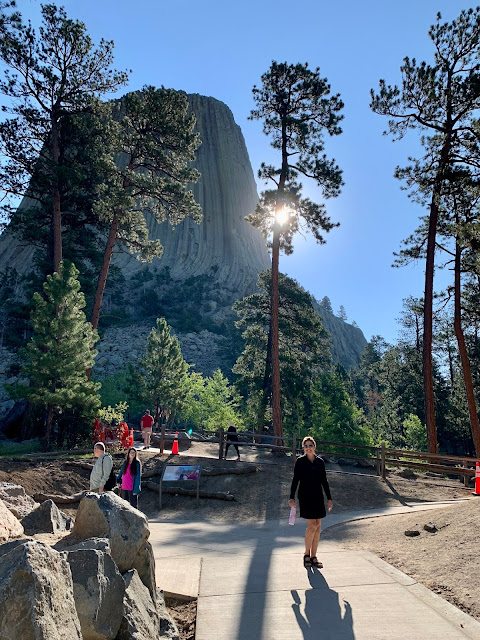 We were surprised to learn that you can climb the rocks and go anywhere on the property, but you need a permit to climb the tower. 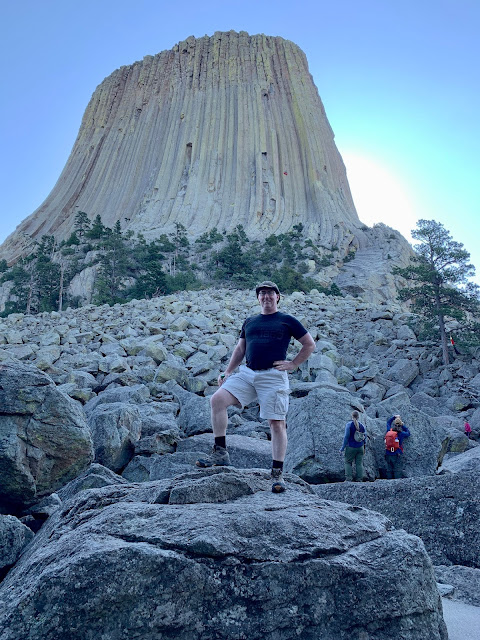 We saw lots of climbers while we were there.  In the picture below I drew an arrow to some climbers.  Can you even imagine doing this? Here is a close up picture of those same climbers.  There are degrees of difficulty for climbing the monument, some sides are graded as easier than others to climb.  This side is the hardest to climb. 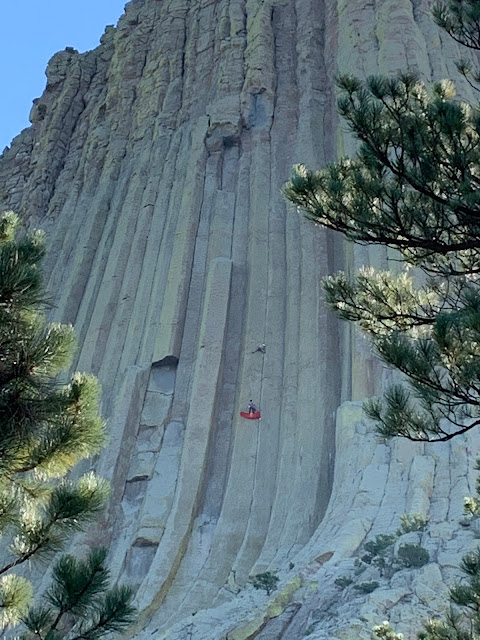 There are so many "stories" of how this rock formation came to being.  My favorite one was the Cheyenne   story of how a giant bears claws created the vertical crevices. 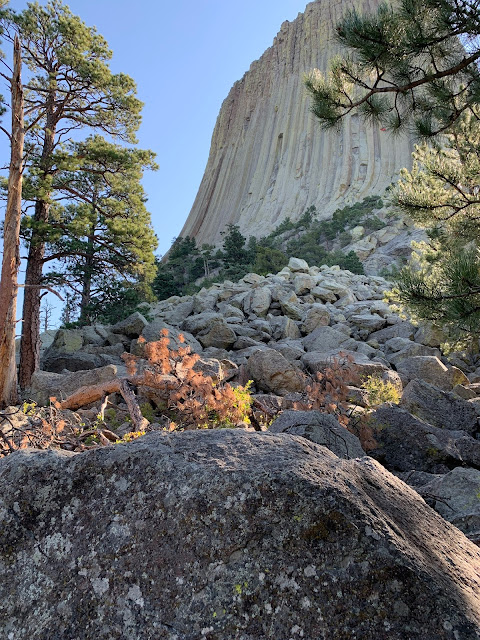 There are actually five trails in the park, but because we had to be in Medora later that day, we were only able to do the "Tower Trail" loop. There is also camping near the park and ranger programs! 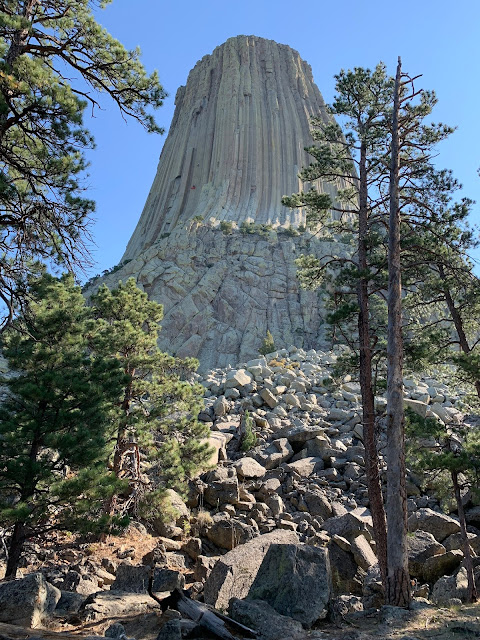 The trail around the monument is absolutely breath-taking.  They even had two scenic overlooks that showed the countryside and information on the early settlers of the area. 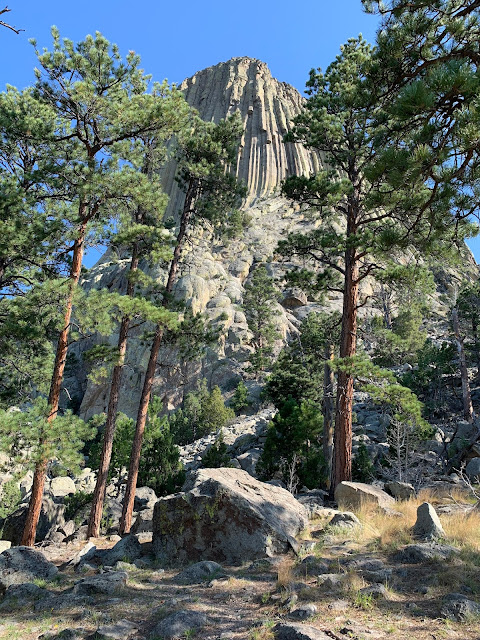 Each side looked a little different and the sides that looked easier to climb had a lot more climbers on them.  The "Durrance Route" is the easiest side to climb.  It takes between 4 -6 hours to climb and an hour or two to rappel down.  There have only been six climbing deaths since 1937 and half of those deaths occurred during the rappel down. 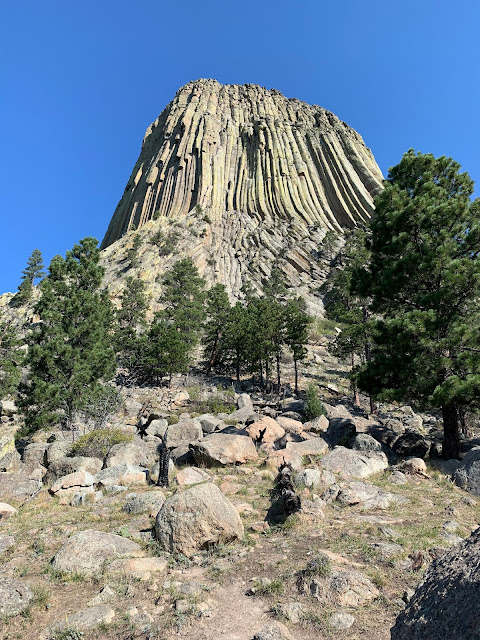 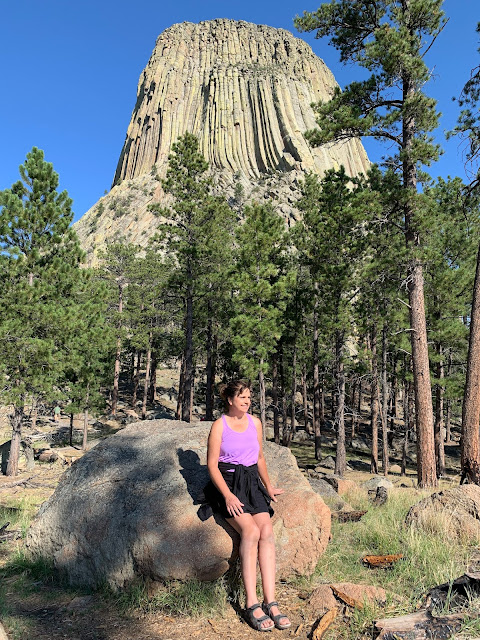 The "Tower Trail" was such a lovely, and peaceful trail.  In addition to the constant magnificent view of the tower always within your gaze, and the two stunning scenic vistas, we also enjoyed our little walk through a forested area and marveled at the large fallen rocks. 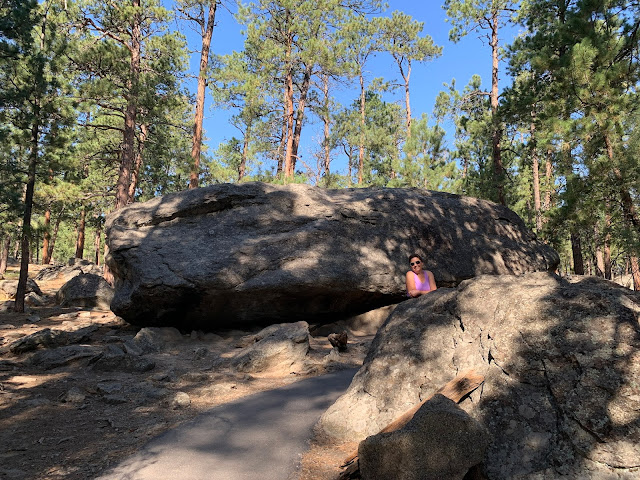 Devil's Tower is 867 feet from it's base to the summit.  In comparison, the Statue of Liberty is 305 feet tall, and the Empire State Building is 1,457 feet tall. 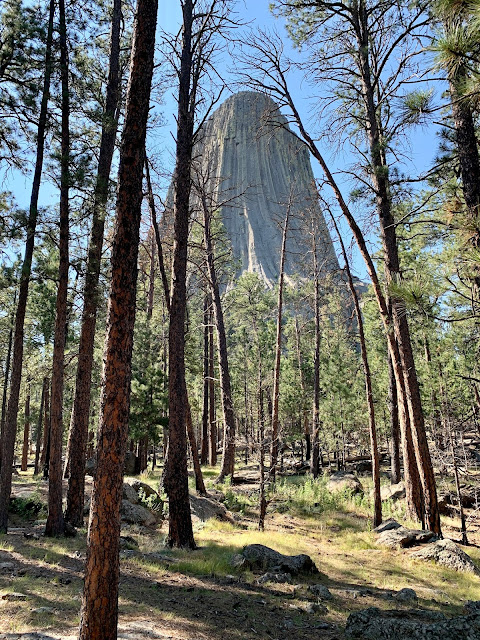 Geologists believe that "Devil's Tower" formed underground as molten rock and then pushed it's way through the surface. 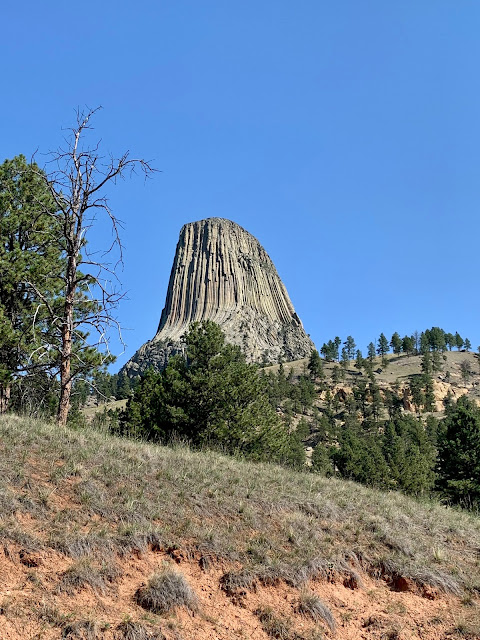 Devil's Tower was such a blessing to see!  We actually planned on seeing it on our last visit our west in 2019 but never made it there, so we were thrilled we got there on this trip!  But perhaps what made our visit even more special is that we were there during Rosh Hashanah.  The entire time we were walking on the "Tower Trail" we could hear a strange sound.  My husband said "It sounds like someone is blowing a Shofar!"  I didn't know what to think.  A shofar in the middle of a forest in a National Monument park?  Well, guess what?  Someone was blowing a shofar!  At the end of our walk, in the beautiful shade of the forest, we ran into a Messianic Jew who was blowing a shofar in honor of Rosh Hashanah.  We spent quite a long time talking to him.  It was so wonderful running into a fellow believer on our trip.  He actually thought my husband was a Jew because he knew so much about Jewish holidays and the Old Testament.  We said "No. We just love Israel and have studied the Old Testament and all the Jewish Feast Days".  Anyway, I wanted to share a short video of this sweet man blowing the Shofar on Rosh Hashanah.
Have A Great Day!  Amy
Linking Up with these Fabulous Blogs HERE!
Posted by Amy Johnson at 12:00:00 AM