I am so excited to begin a new travel series, and this one will be a LONG one, because we crammed so much into our five day fall vacation out west!  In five days, we visited The Badlands, Spearfish Canyon, Devil's Tower National Monument, Bear Butte State Park (where we took one of the best hikes in my life!), Theodore Roosevelt National Park, and Medora, North Dakota.
Now in 2019 two of these places I had been to before:   The Badlands (read more about my first visit to the Badlands HERE) and Spearfish Canyon (read about the hikes we took in Spearfish Canyon during our first visit HERE and HERE).  However, there were a few hikes we didn't get to do at these two places when we were there the first time, so we always planned to come back another time....and another time finally arrived! 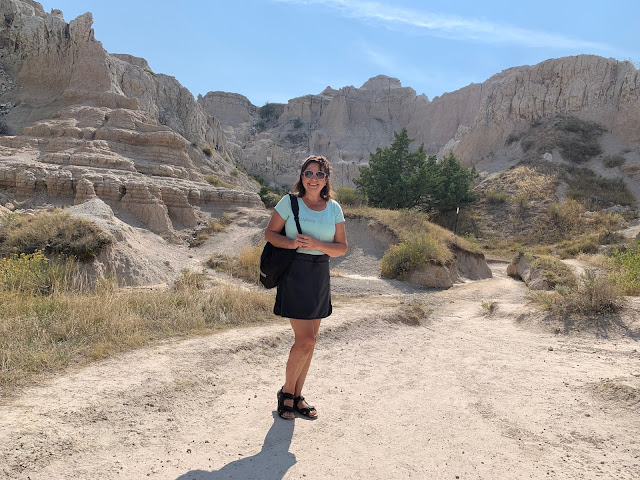 The last time we were in the Badlands, we spent most of our time on the north end and we never made it to the Visitor Center.  As we drove farther into the park to exit out the other side to Wall, South Dakota, the views got more and more beautiful.  But we were short on time, so all I could do was look out the window and drool.  I said to my hubby "I want to come back someday, and spend more time at the south end!"   So on our first day of vacation, that is exactly what we did.

We first stopped at the visitor's center to pick up a trail map.  After looking at the map, we realized we had actually hiked a lot of the shorter trails the last time we here, and there were only two trails we really wanted to hit on this second trip. 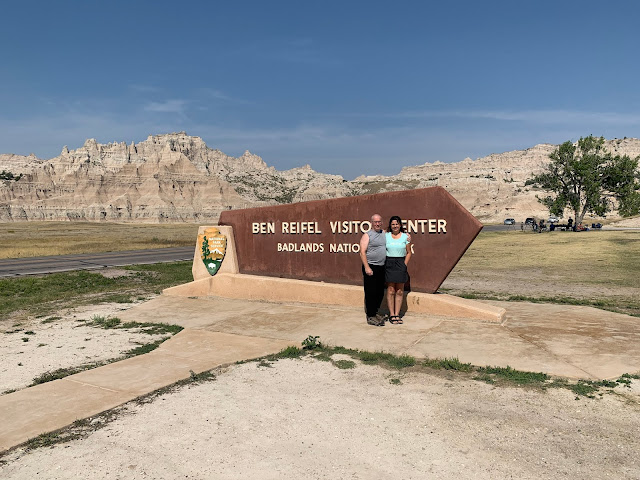 We decided to hike "Notch Trail" and "Saddle Pass".  I will cover "Notch Trail" in this week's post, and next week I will show the other trail plus the scenic views on the "Badlands Loop Road". 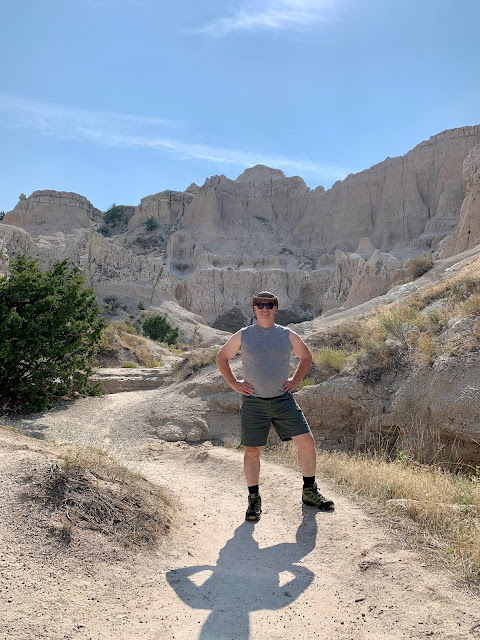 "Notch Trail" is 1.5 mile round trip trail described as "Moderate to Strenuous".  I think it's actually a super easy trail HOWEVER the "Moderate to Strenuous" part is because you have to climb the "Ladder" pictured below.  The trail is not recommended for anyone with a fear of heights.  Once you reach the top of the ladder, you follow a ledge to the "Notch" where you are rewarded with a dramatic view of the White River Valley.  There are some drop offs you have to keep an eye out for on this trail. 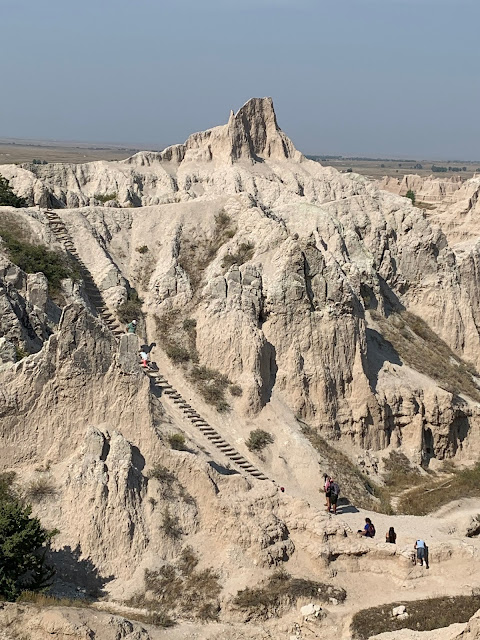 The worst part of climbing the ladder is waiting your turn.  If someone is at the top, and wants to come down, you have to wait.  Some people can be super, super slow and you could be waiting a long time. That is what happened to us, so we never climbed "Up" the ladder.  We found an alternative way up the side, which I think was much easier.  We did take the ladder back "down" though, and I will talk more about that at the end of the post. 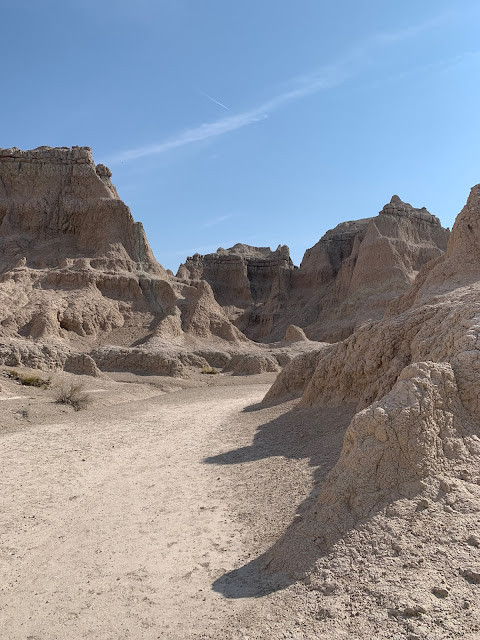 Once you reach the top, the rest of the trail is super easy and flat, but you do need to watch for drop offs as mentioned above. 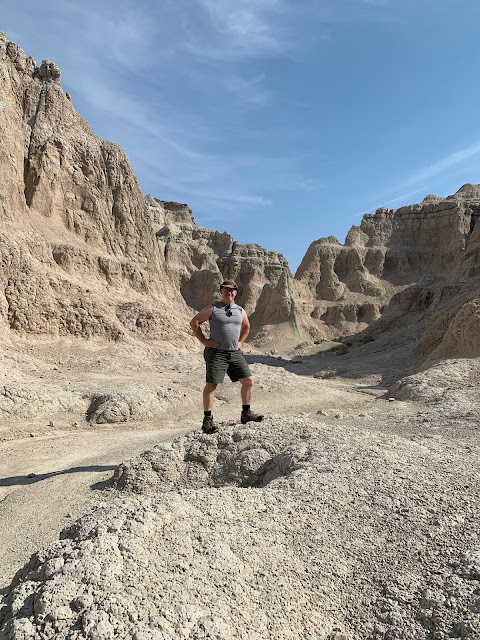 This is the "Notch".  It's like a very large window in-between rock formations and you get to see this amazing view. 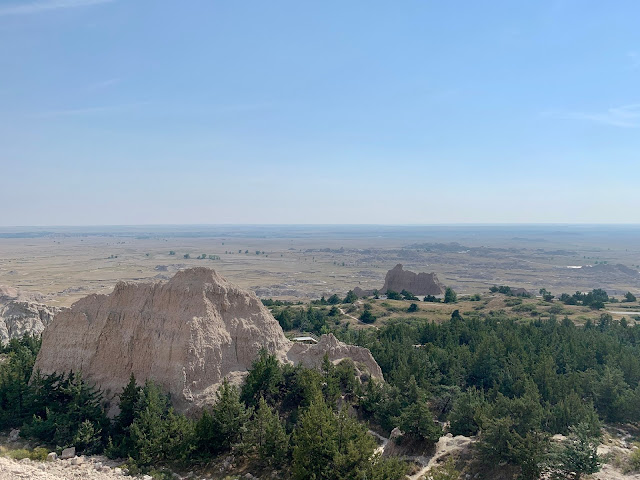 Here I am standing to the closest rock formation to the left of the "Notch". 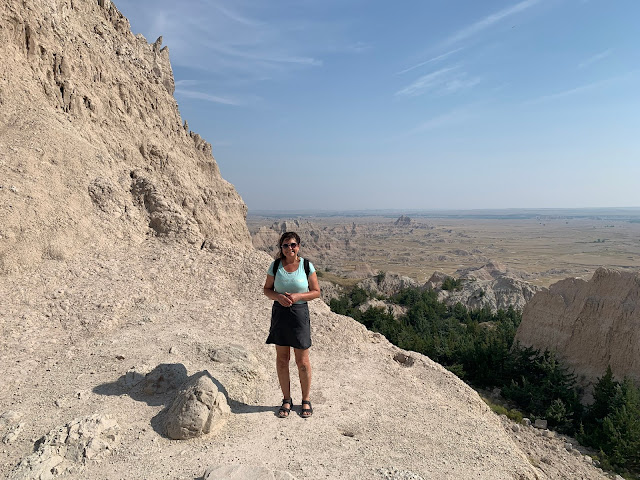 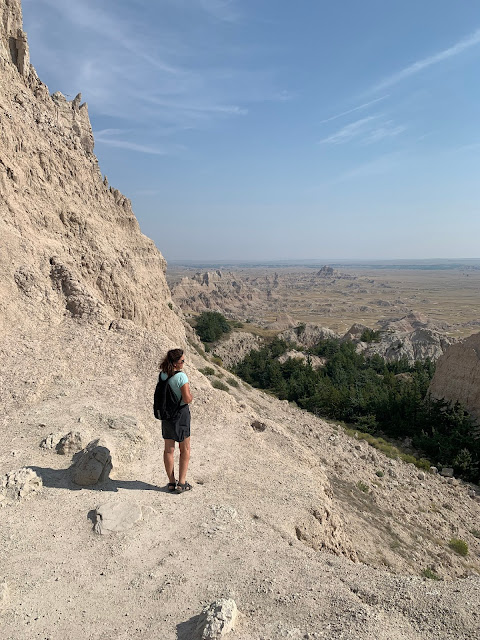 We really enjoyed all the beautiful and interesting formations on this hike. 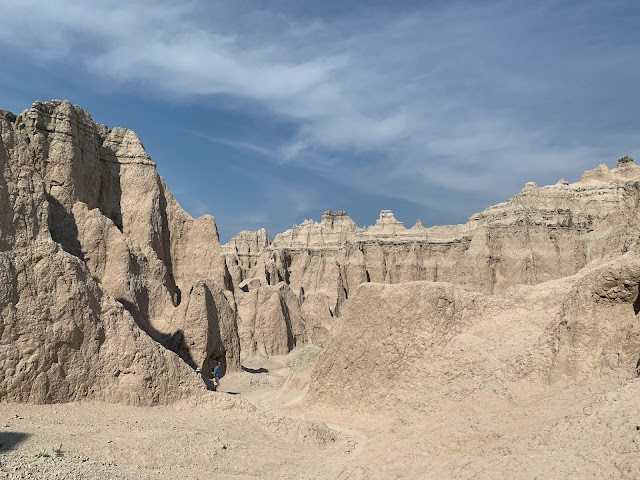 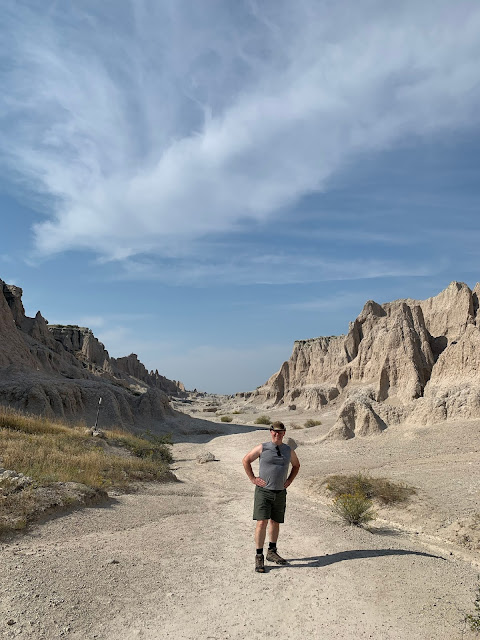 There was some type of gully where it looked like overflow water runs through.  This trail is considered "treacherous" during or after heavy rains.  I could see why, as the water probably rushes through this gully I'm standing above in the photo below.  We did get off the trail and climb down into the gully.  It was so interesting. 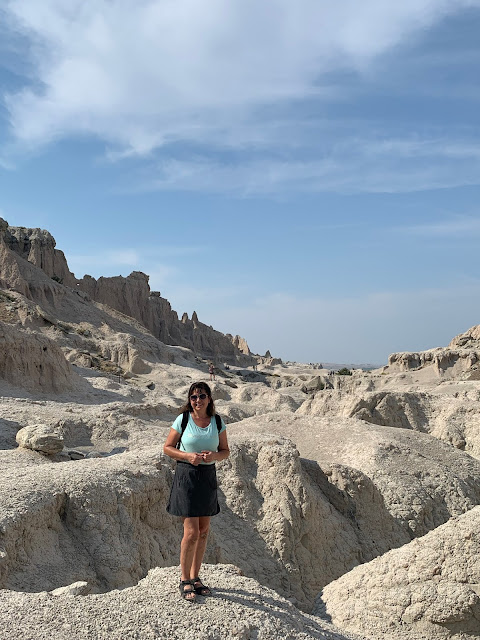 Well, what comes up must go down.  We could have taken the same off-trail path to go down, but we really wanted to try the ladder.  Even though I'm TERRIFIED of heights, I really wanted to try it and test myself.  I was perfectly fine when I first started over the edge, but around the time I got to the most straight up part of the ladder, I did have a brief panic attack.  The ladder isn't entirely bolted into the rock, and does shake and move a bit.  I had to talk myself out of going into a full mode panic and keep moving down.  I was so proud of myself, but apparently I embarrassed my husband by how slow I was.  I certainly didn't feel I was moving slow.  But he said everyone was watching and he said I was as bad as the other lady who we got impatient with climbing up.  Whatever.  I did it.  I moved as quickly as I could to not hold up the line.  I did my best and that's all I can do. 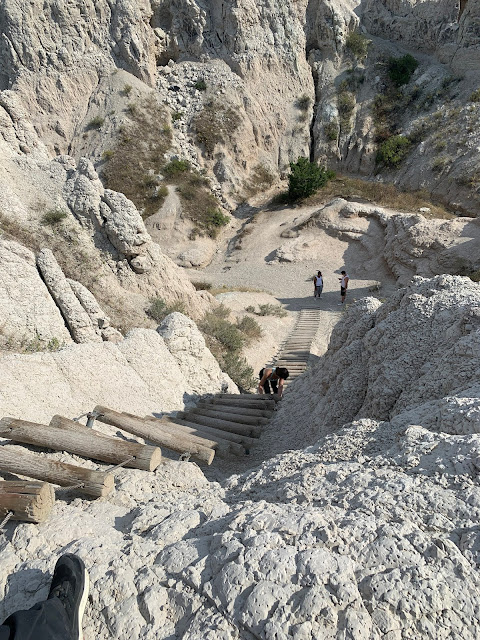 When I got off the ladder and started walking I had the oddest sensation in my upper thigh.  I had never experienced that type of pain before, and couldn't recall a moment on the ladder when it might have happened.  It made me wonder if I tensed up during the panic attack and that caused a muscle spasm.  I don't know, but the entire week I had pain in that thigh and I had to hike all week long with that pain.  That was the only big bummer we had on our vacation.  I really wasn't counting on getting injured on Day One of our vacation.

So what about you?  Would you have climbed up this ladder with ease?  I'd love to hear from you!

I will be back next week with part two of The Badlands.