Three weeks ago we had a gorgeous 65 degree weekend, so we drove to Baraboo, Wisconsin to do some fall hiking in Devil's Lake State Park.
Devil's Lake is everyone's favorite park in Wisconsin and it is also Wisconsin's largest and the most visited state park averaging three million visitors per year.  There is something for everyone to do here.  You can boat, kayak, fish, swim, hike, hunt, camp, rock climb, scuba dive, ski, sled, and snowshoe.   We have camped here (see this old post from 2012 HERE)  during the summer and we really enjoyed the hot sandy beach and warm 70 degree water to swim in.  The lake is 368 acres and 47 feet deep.  It is surrounded on two sides by 500 foot quartzite bluffs.  Most of the hiking trails are either on the East Side Bluff or the West Side Bluff. 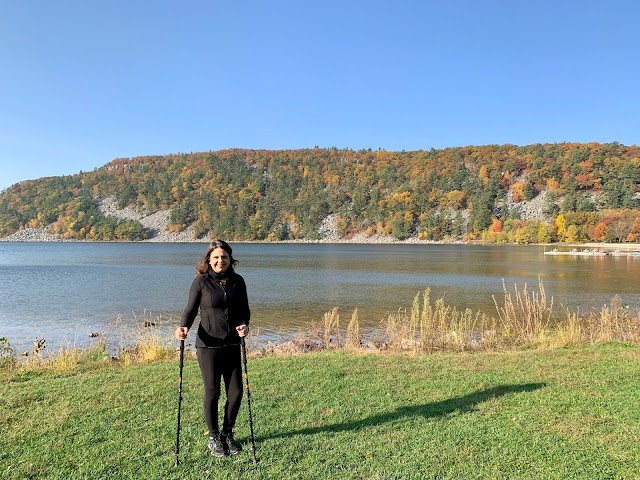 There are so many beautiful hiking trails in Devil's Lake but if you're only in the park for one day, the East Bluff Trail is a must!  It is the most popular trail as it on this trail you get to see the famous features the park is known for:  Balanced Rock, Devil's Doorway,  and Elephant Rock and Cave. 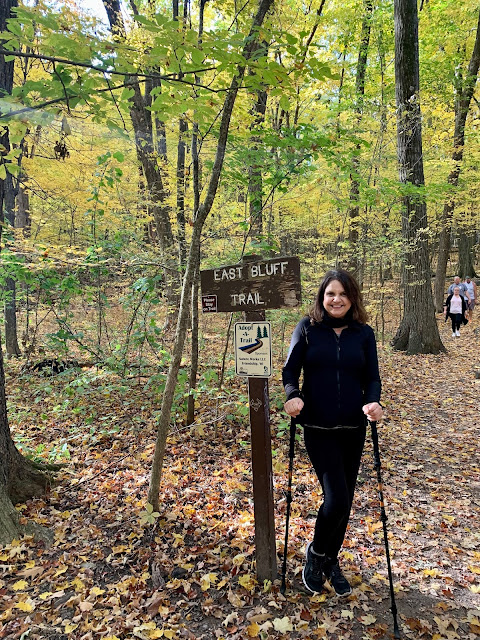 The East Bluff Trail is described as moderate, which I would agree with.  However, to see Balanced Rock or Devil's Tower you have to descend down onto a rocky cliff side which can be tricky for some people.  If climbing on sheer rock cliffs is not your thing, but you still want to see the spectacular views, the easiest way to get up to the top of the bluff is to start on the north shore where the ascent is less steep, then take the East Bluff Woods Trail back down. 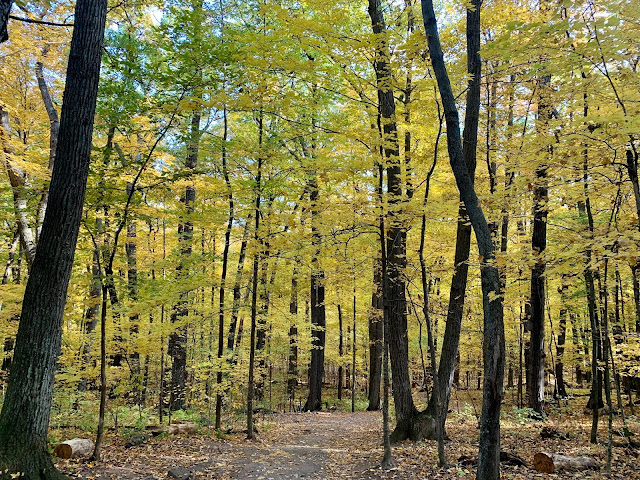 I honestly found the forest trails almost as spectacular as the scenic views from the top of the bluffs.  The fall foliage in Devil's Lake State Park is AMAZING!  I know it's too late to go this year, but if you want to plan a fall trip for next year, plan on going the 2nd or 3rd week of October.  When these pictures were taken, it was the 2nd week of October.  But, we enjoyed ourselves so much and wanted to finish another part of the trail, so we went back the following weekend and felt the colors were even more vibrant! 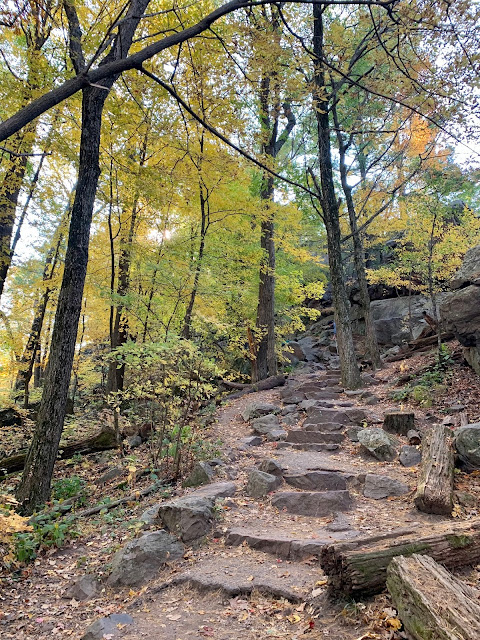 There are many, many jaw-dropping overlooks on the East Bluff Trail.  Every time you think you saw the best view ever, you turn a corner and there's an even better view!  My husband and I wondered why Devil's Lake isn't a national park instead of a state park...it's just that incredible. 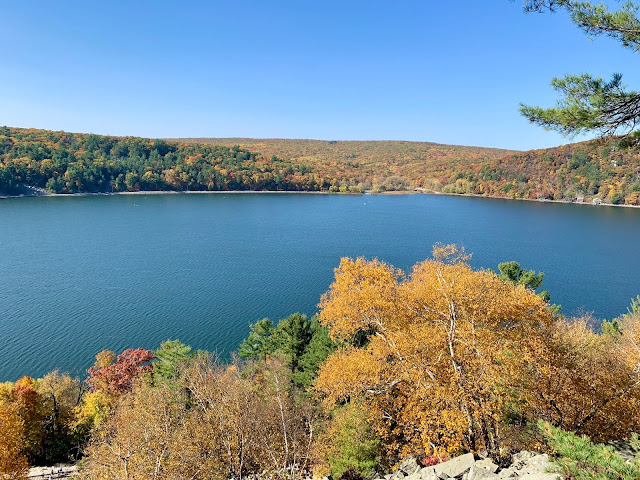 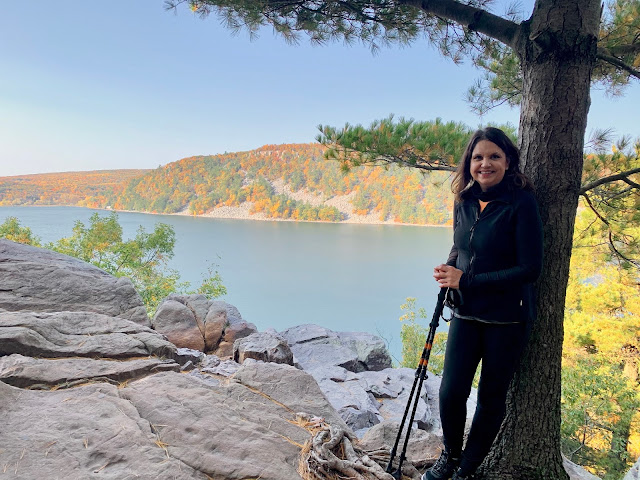 There are so many interesting rock formations on the trail. 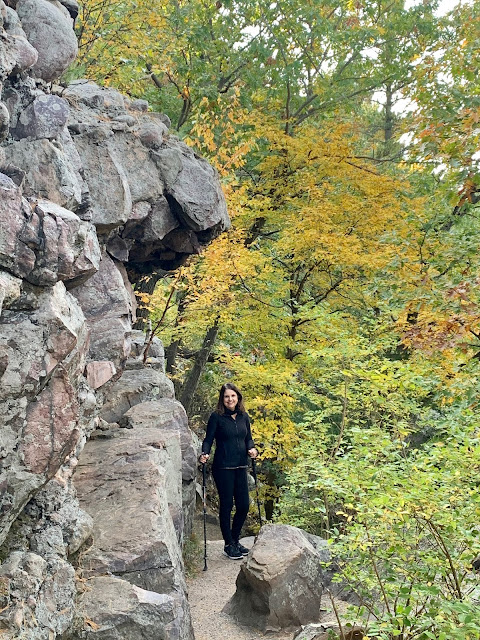 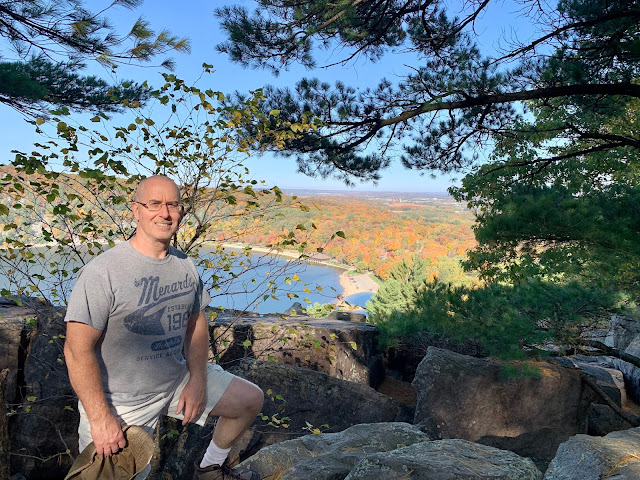 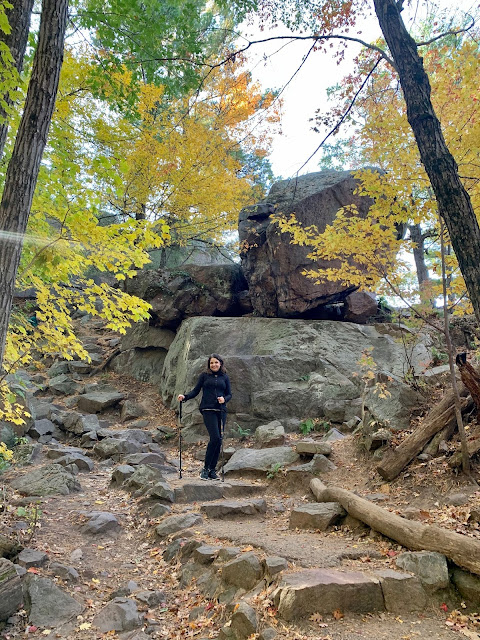 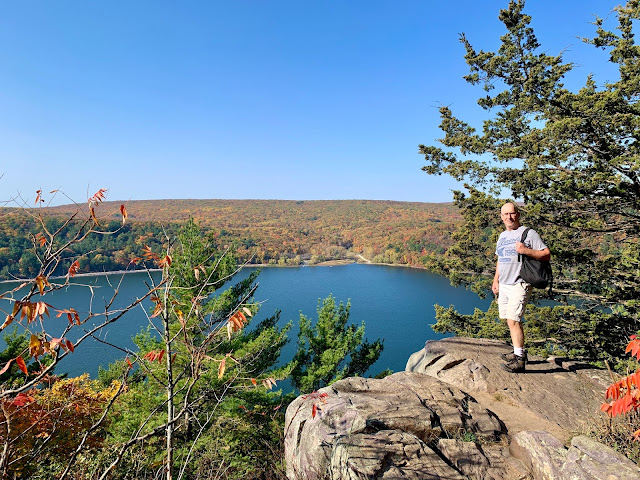 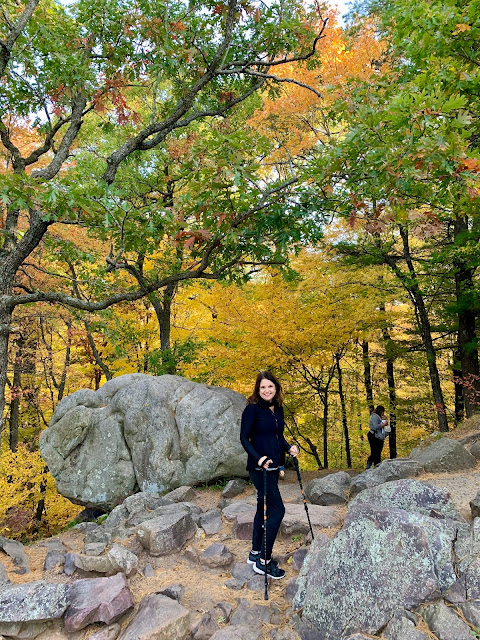 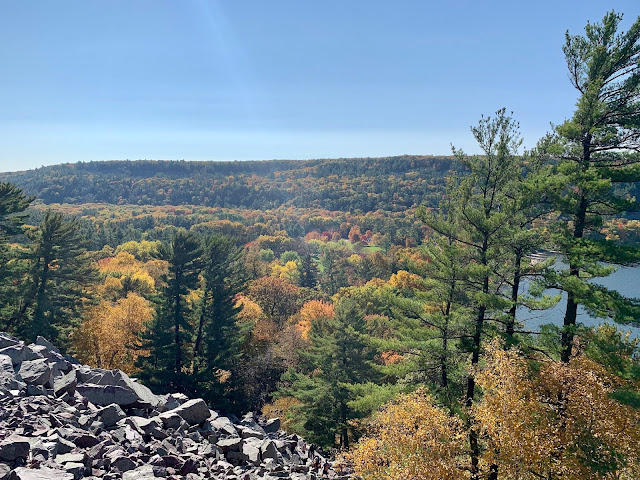 This is Elephant Cave.  It is very small, you can't really go too far inside to explore, but you can poke your head in and snoop around if you dare! 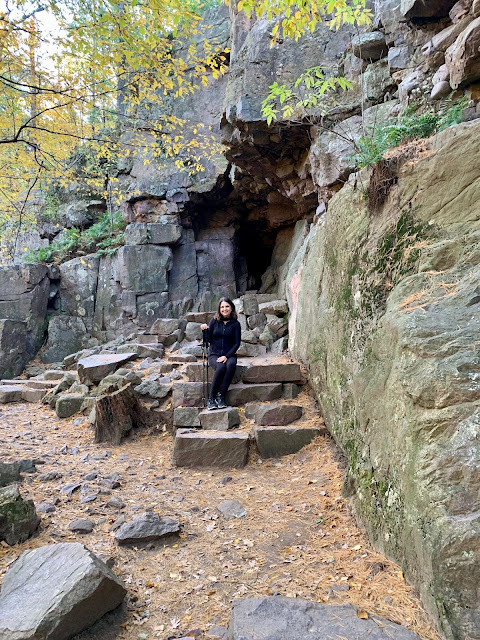 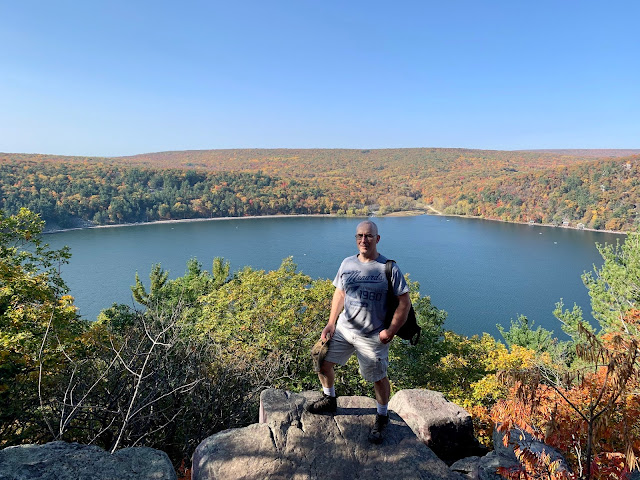 This is Balanced Rock.  I did not have a good experience on this trail.  To see the balanced rock, you have to get off of the East Bluff Trail and climb quite a ways down a rocky cliff.  It was a super crowded day and the trail was literally so packed with hikers that people were "waiting" just for an opportunity to move.  The problem was that the trail is very narrow and steep and you can climb up to see the Balanced Rock from the bottom too so we kept have "Traffic Jams".  Also, the pine needles just dropped so the rocks were very slippery and people (even young ones) were slipping and falling.  I had my walking sticks and they were a life saver because I could use them as a bannister to climb down the steep rocks. 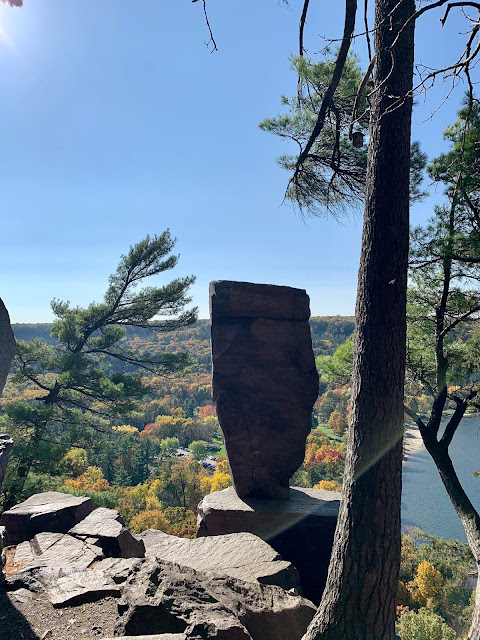 I was so overwhelmed by the time I got half way down the Balanced Rock trail that when I saw the rock I said "That's It? I hiked down a mountain to see this?"  ha ha!  The Balanced Rock Trail is only 0.4 miles and is described as "Challenging".  I would say that is very accurate!  It is a difficult, steep, climbing trail with no railings.  One slip, and you're a goner!  It takes about an hour to climb this trail, longer in the summer due to the crowds.  The Balanced Rock is about 2/3rd's of the way up to the top of the trail.  If you'd like to experience what it is like hiking down Balanced Rock without any people around, there is a great video of the experience HERE! But the views from the rock were incredible! 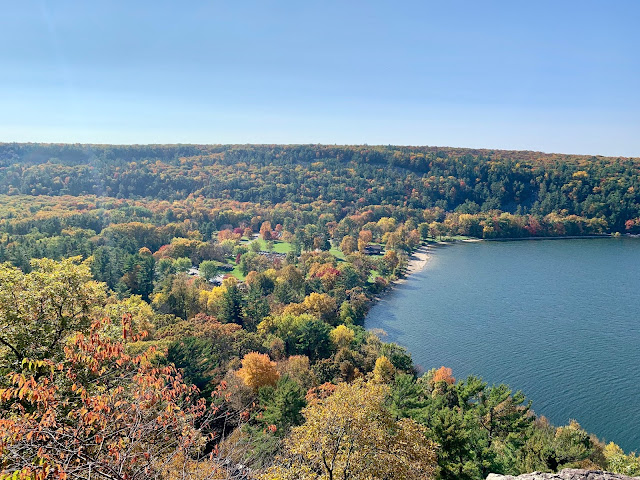 Hubby was brave enough to go stand right next to the rock, but I was not. 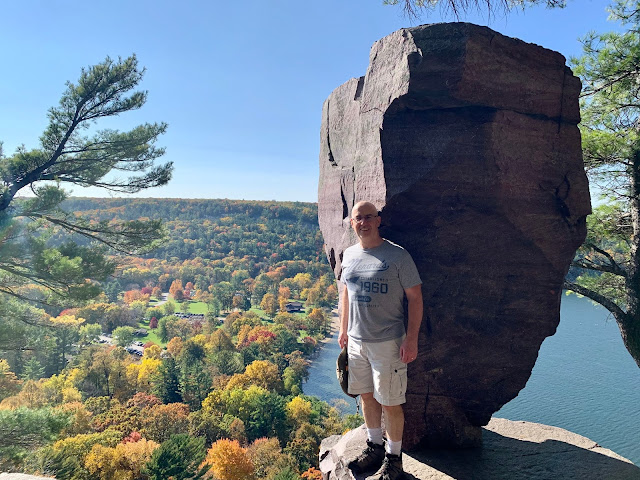 Well, once we saw the rock we decided that due to the crowds (and the fact it was past lunch time and we were hungry) that instead of going back up the cliff, we would just walk the remainder of the Balanced Trail down to the lake level and call it a day.  I was disappointed, because I really wanted to see Devil's Doorway, but we decided to come back the following weekend. 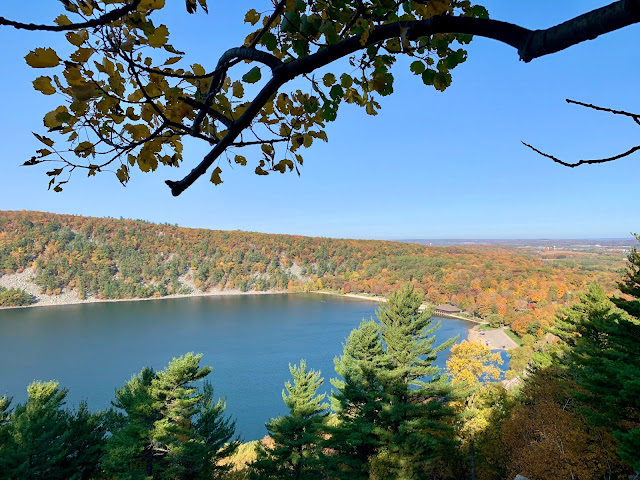 Once again, the forest views did not disappoint. 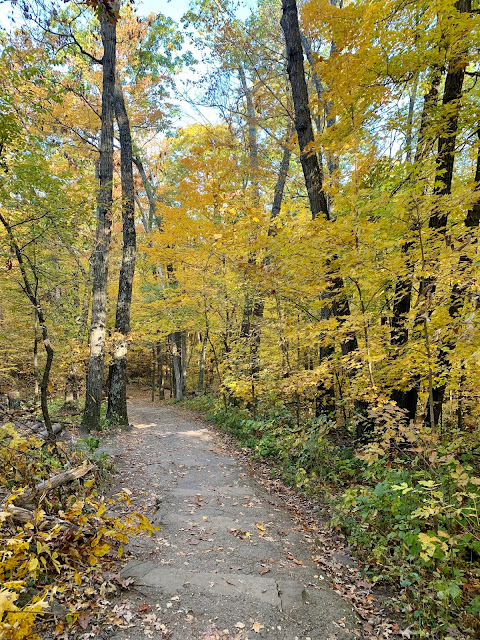 Once we finally reached the bottom of the bluff we headed for the potties, had a snack, then checked out the gorgeous lake views from the south side of the lake. 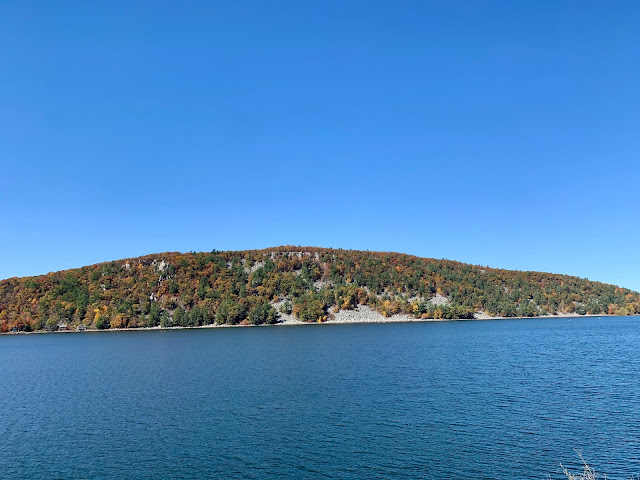 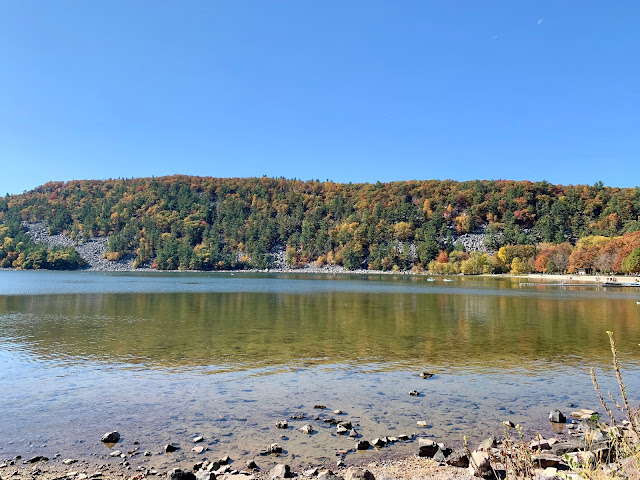 Now here's the tricky part.  On the East Side Bluff, the only way to get back to your car parked in the north shore parking lot is to either climb back up the bluff and take the East Woods Bluff Trail or the East Bluff Trail back (Or you could go all the way around the south end of the lake and take the Tumbled Rocks Trail back, which is a spectacular trail. See this old post HERE. ).  Hubby thought the day was already late and that would add a lot of miles to our already taxing day, so he suggested we take the railroad tracks back.  You are not supposed to walk on the railroad tracks, as it is used twice a day, but everyone walks on them.  It was filled with hikers when we were there.  And frankly, I've been to Devil's Lake multiple times in my life and I've never seen a train go through this park, so I have no idea why they say on their website that a train goes through twice a day.  I also don't know why they just won't put in a trail on this side of the lake. 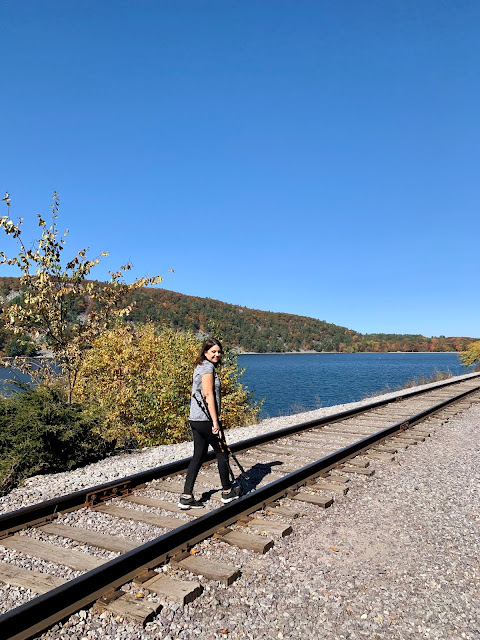 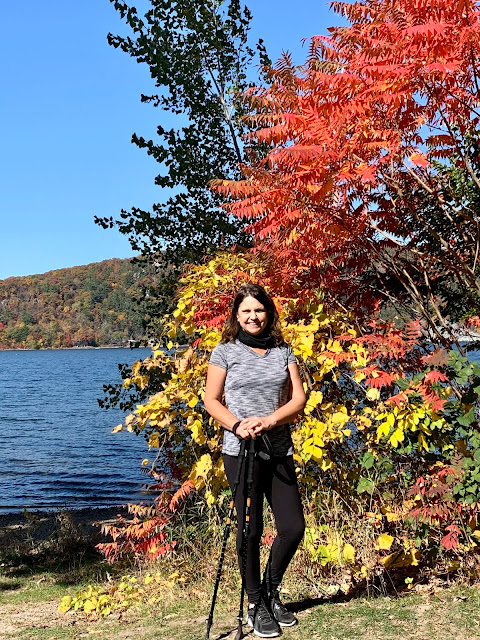 When you're down on the beach, it's fun to look up and see how far you climbed. 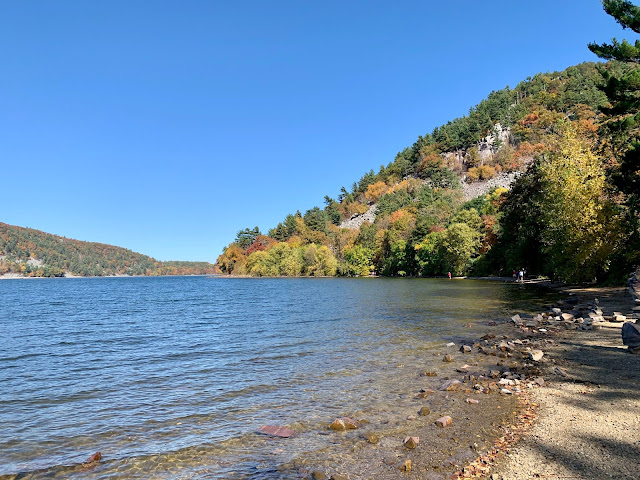 All in all on this day we hiked one mile on the East Bluff Trail, climbed down 0.4 miles, and hiked another mile back to our vehicle.  We had a picnic lunch on the grounds near the beach, then got back into the car and enjoyed the beautiful colors even as we left the park.  We couldn't wait to come back next week and see more! 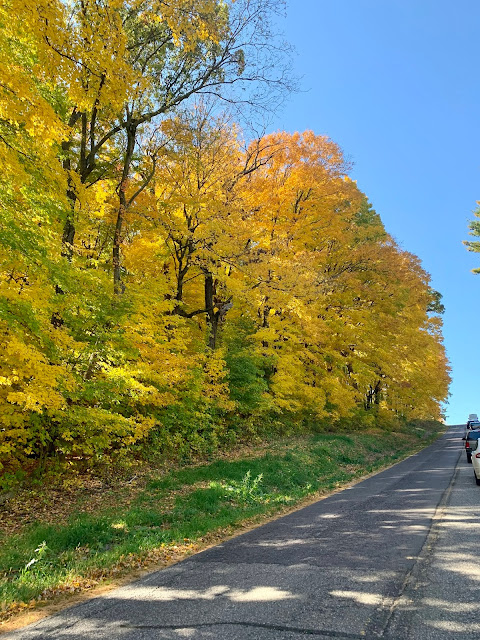