A Night In Wisconsin Dells With Family

A few weeks ago we met up with our children in Wisconsin Dells for the weekend.  It's only a two hour drive from our home to the Dells, and about a three hour drive for them, so it was a pretty good halfway point for a meet up with plenty to do in the area.  We spent most of the day on Saturday hiking in Devil's Lake State Park.  After lunch, we intended to do more hiking, but Alethea was tiring of hanging off of dad's back, plus it was getting windy and cold, so we all decided a good soaking in our hotel's hot tub was a better idea. 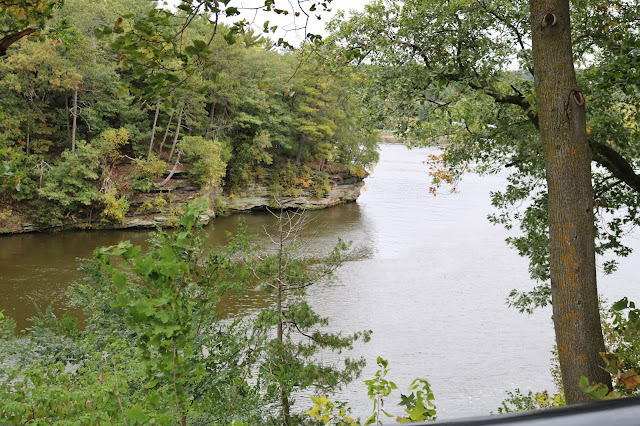 Being the budget traveler I am,  I wanted to keep the weekend as inexpensive as possible, so I picked a room at the Atlantis Family Waterpark Hotel that had two queen beds and a set of bunk beds.  Alethea was wowed by the bunk beds as she had never seen them before.  She looked at them and said "Ooooh!"  and of course it was a challenge all night keeping her from climbing the ladder!  ha ha! 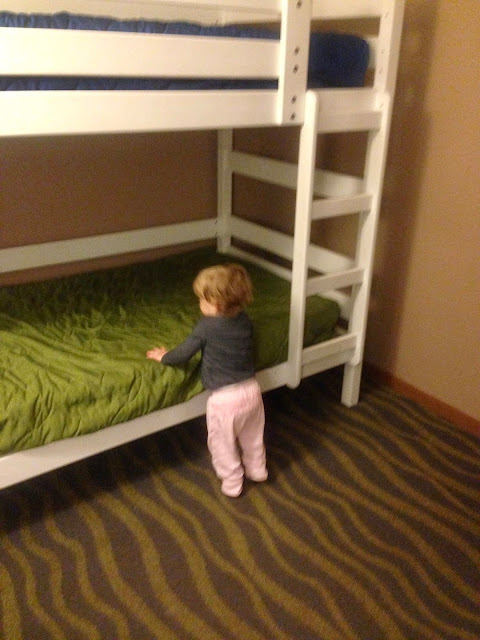 The Atlantis has three "waterparks":  one outdoor and two indoor.  Although they are all nice pools, I would hesitate to call them "waterparks".  They all have fun slides and things that spray.  We really appreciate the toddler area which had water that was only ankle deep.  For Alethea's age, this was all she needed.  She actually was a little overwhelmed at first and started to cry, but eventually warmed up to everything and had a great time as obvious in the picture below.  I was glad I rented a room at this hotel instead of at some of the more expensive ones with elaborate waterparks, because I don't think Alethea would have gotten much out of the bigger ones.  But someday, when she's older, she will! 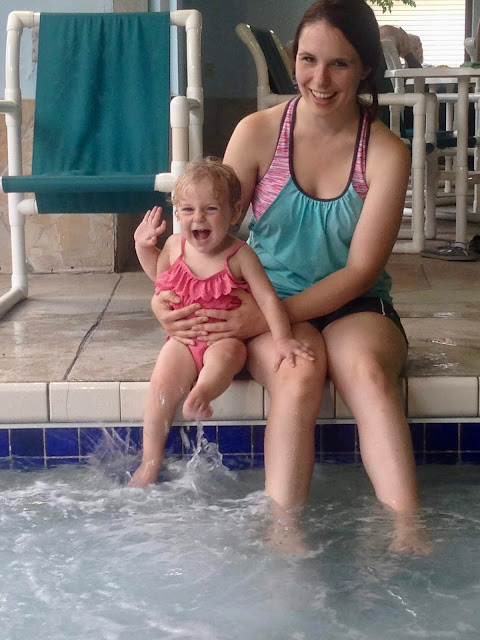 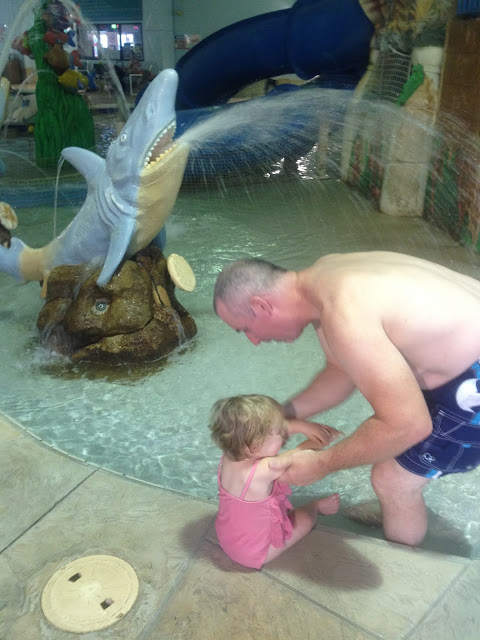 After a few hours at the pool, we went back to our room and changed for dinner.  We decided to go to a fancy burger place right across the street from our hotel called "B-Lux Grill and Bar".    It must have been homecoming night, because there were a lot of young people there wearing homecoming dresses.  We had to wait about twenty minutes for a table, but it was worth it.  The burgers were pricey, but they were delicious.  The presentation of the food was amazing too.  So if you don't mind spending $14 -16 for a burger, give it a try!

My husband ordered the B-Lux Double Stack which was "a pair of thick patties stacked with crisp bacon, cheddar cheese, American cheese, pulled pork & a fried egg" .  It was so huge!  He
couldn't even it all! 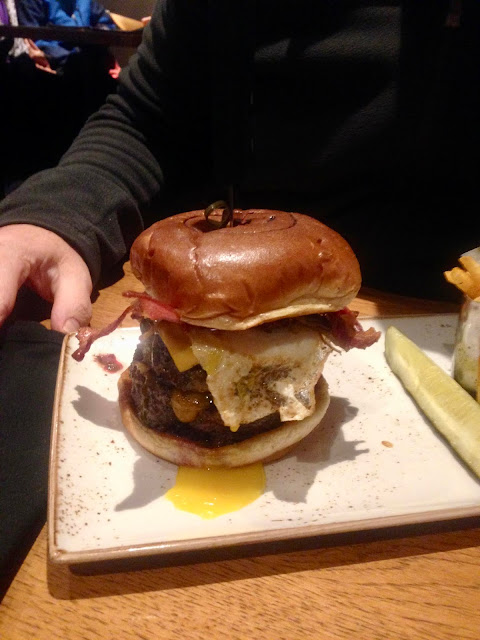 I had The Cheesehead which had beer battered cheese curds, chicken fried bacon, shredded lettuce, and Wisconsin cheddar.  It was amazing!  And yes, I ate the whole thing. 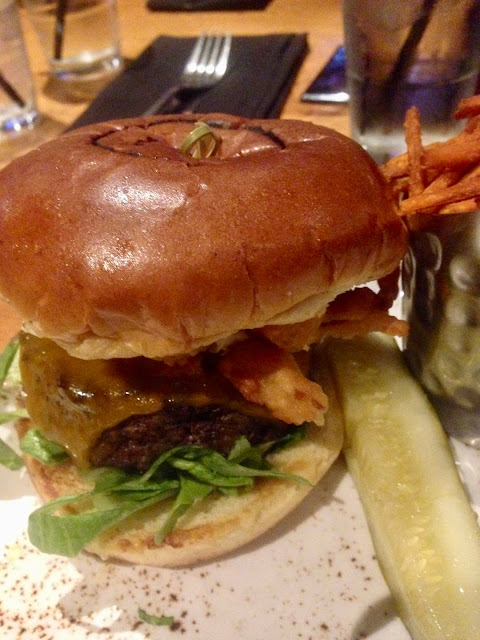 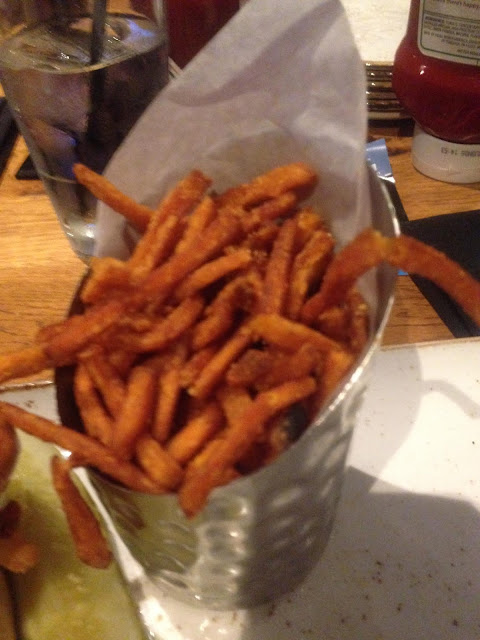 After dinner we went back to the hotel where Alethea spent the rest of the night tearing the room apart and jumping on the beds.  ha ha!  I had to disconnect the phone, the alarm clock, pull the Kleenex box out of the wall compartment (or she would have pulled every single one out of the box), and put anything and everything else I did not want her to destroy up and out of reach.  Of course, the next morning, we put everything back where it was.

The next morning after we had a continental breakfast at the hotel and checked out, we headed to downtown Wisconsin Dells.  The first thing we did was stroll their river walk.  That was where the first picture in this post was taken. 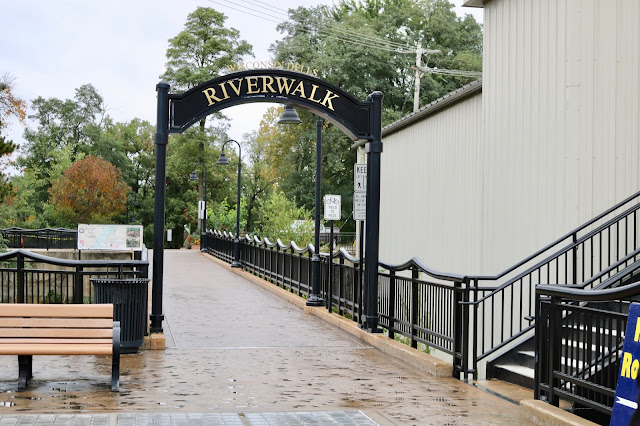 The river walk is short, but so pretty.  If you're ever in the Dells, be sure not to miss it! 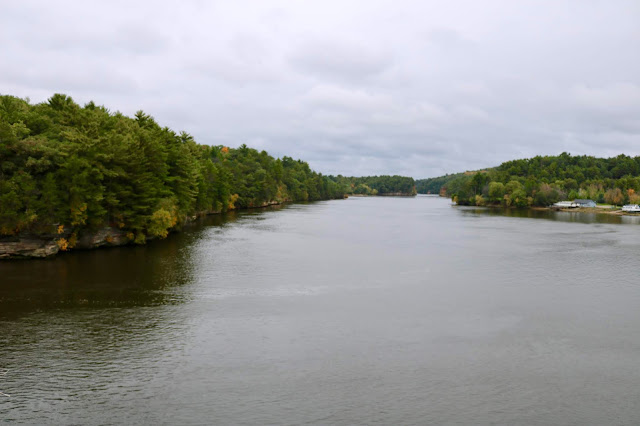 The Wisconsin Dells is a popular tourist destination, especially for Milwaukee and Chicago residents.       The city is known for the dells of the Wisconsin River which is a scenic, glacially formed gorge that features striking sandstone formations along the banks of the Wisconsin River.  However, the drawback of the Dells, is that all the land is privately owned.  You can not see the Dells unless you're willing to shell out $$$$ to take a boat ride or duck ride (or you own a boat yourself).  These rides cost at least $30.00 per person and usually involve very long waiting lines.  Plus, the Dells are divided into the Upper and Lower Dells, so if you want to see both, you have to pay twice.  It actually really bothers me how touristy the Dells are.  I wish this land was made into a National or State Park so people of all income levels could enjoy it.  It's an issue my husband and I disagree on, because he is always against "Federal land grabs".  I understand why, and I'm usually against it to, but at the same time, I hate to see a beautiful area profited on and available only for the elite to see.

In the picture below, you can see some of the boats docked that are used for Dells boat rides.  Although tours were available this day, we did not take a boat ride because it was so cold.  I do hope to come back in the summer with my husband to take one of these rides so I can see the Dells. 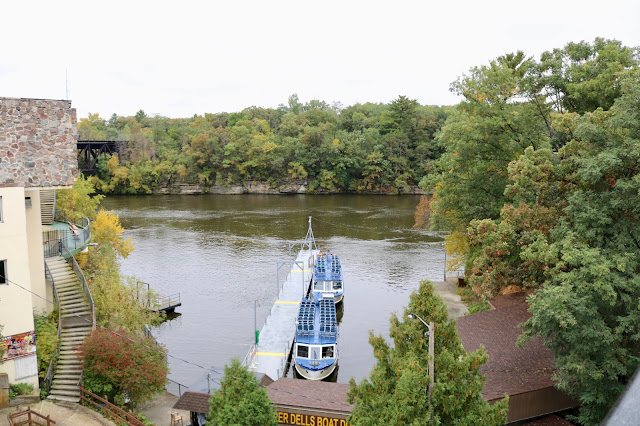 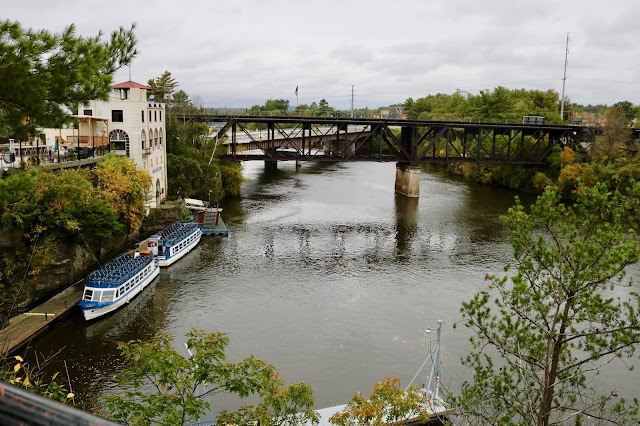 In the meantime, we just enjoyed what little view we could see from the river walk.

Alethea has gotten so cute with the camera since my last "Grandma and Me" photo shoot.  She's starting to smile for the camera, like she knows we are taking pictures of her.  She seems to really enjoy having her picture taken. 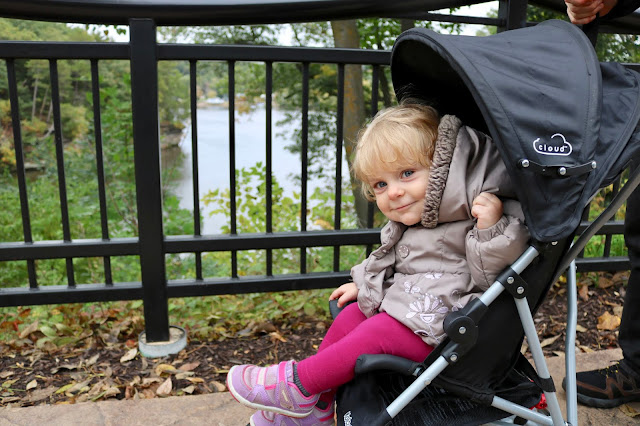 This pretty wooden bridge was on the river walk.  The building in the distance was a restaurant that had great river views and outdoor patio seating. 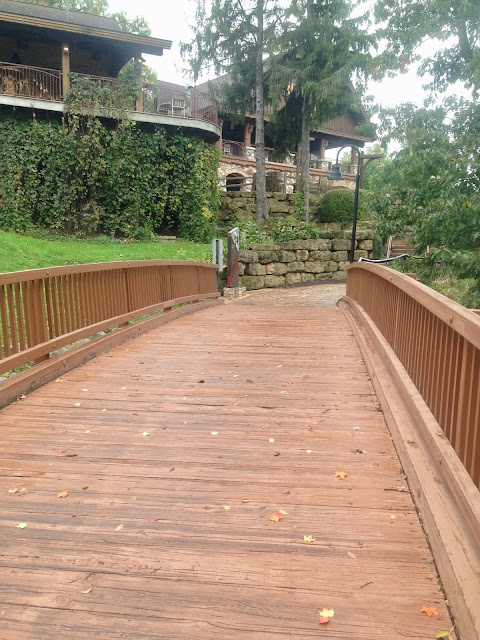 The river walk was nicely paved with lookouts, benches,  and nice street lamps. 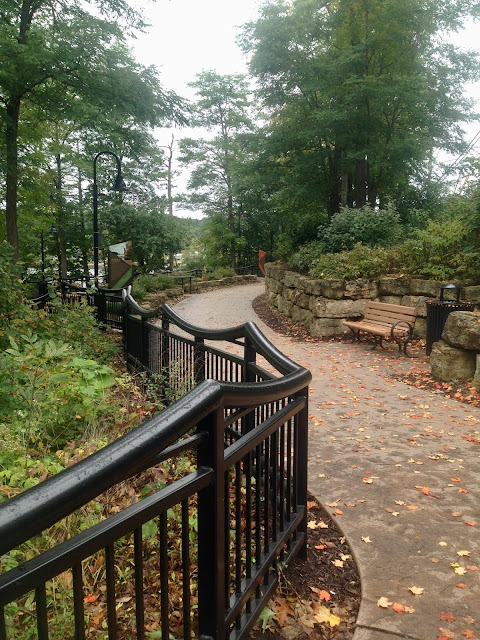 After strolling the river walk, we walked downtown.  Even though it was early Sunday morning, most of the stores were open.  We couldn't believe how many fudge shops there were!  We finally decided on this one because it was the largest, and cutest.  We purchased a turtle, some dark almond bark, and enjoyed some free hot cocoa while we shopped. 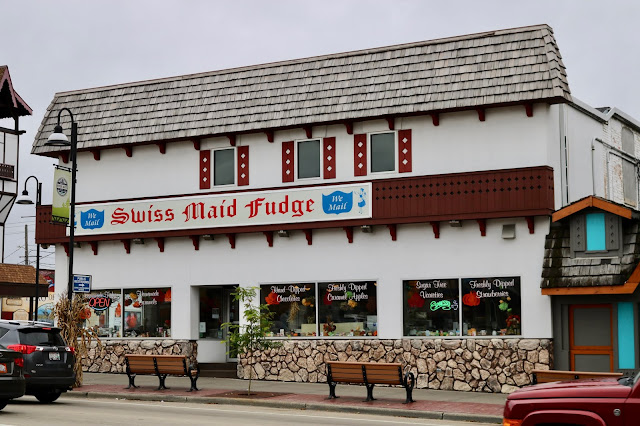 Even though I only live two hours from the Dells, I've only been there once when I was a little girl.  I had no idea how large their downtown was.  It reminded me a lot of Branson.  We definitely need to go back and some more time there. 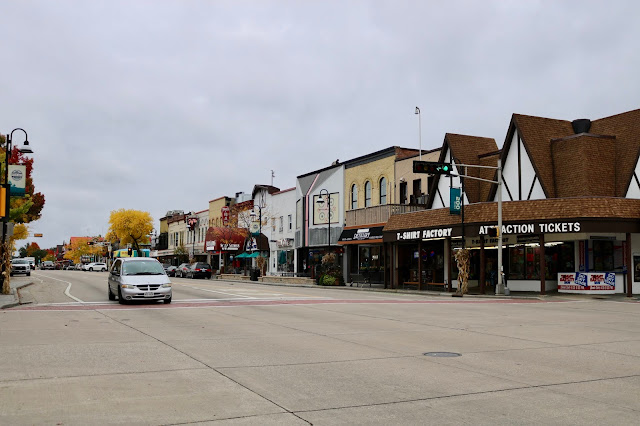 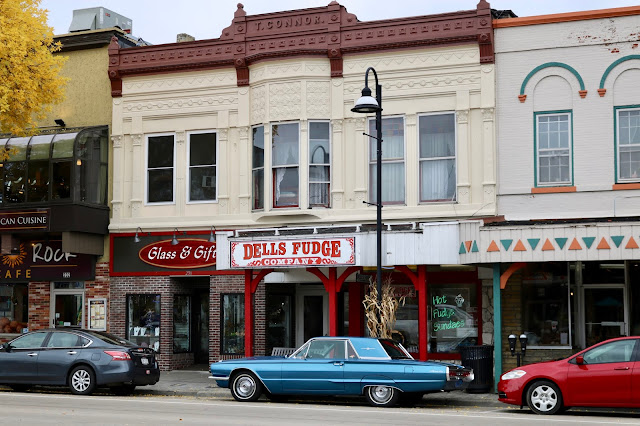 The area had a "European Village" feel.  It seemed they were trying to appeal to all the different old ethnic groups from Milwaukee:  Polish, German, Swedes, etc. 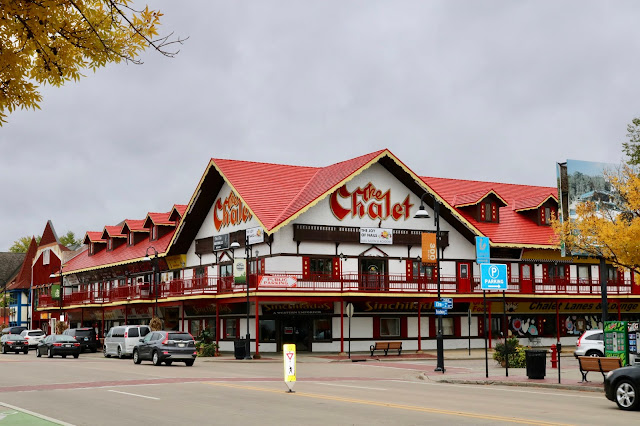 Even though we were all still full from breakfast, we stopped in a cheese store and enjoyed lots of free samples of cheese.  My favorite was a bleu cheese!  We also enjoyed sharing an order of fried cheese curds! 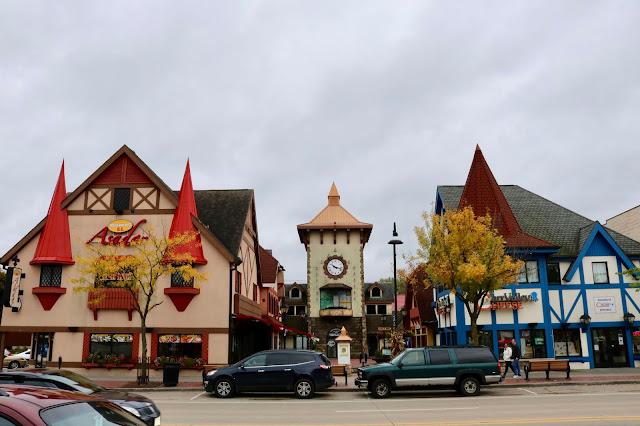 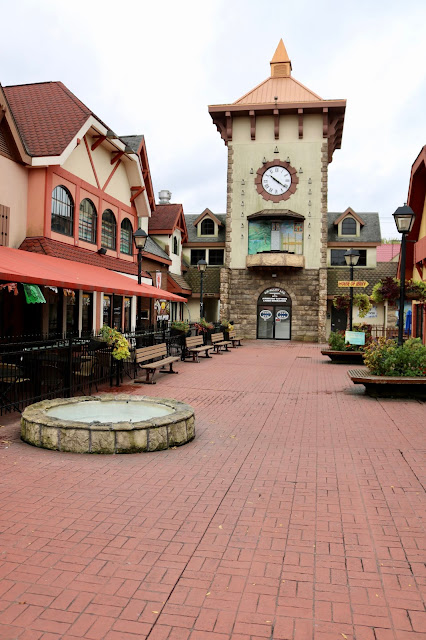 The downtown was decorated for fall and it was fun stopping and taking some fall photos of Alethea. My daughter and I agreed though that we wish it wasn't so cold and we could have worn pretty fall outfits instead of winter coats!  That's always been the problem with the Wisconsin climate.  We really only have two seasons:  summer and winter. 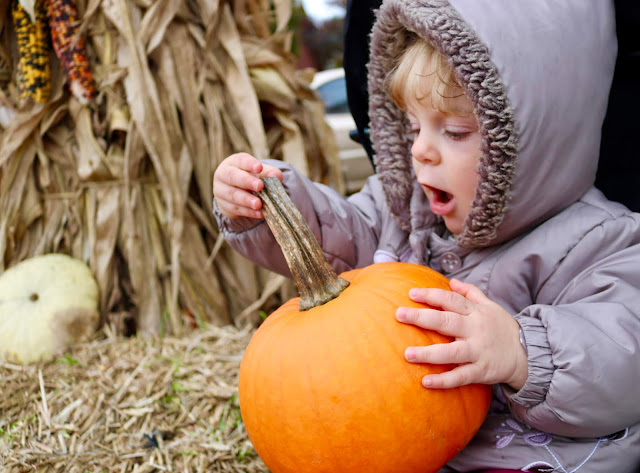 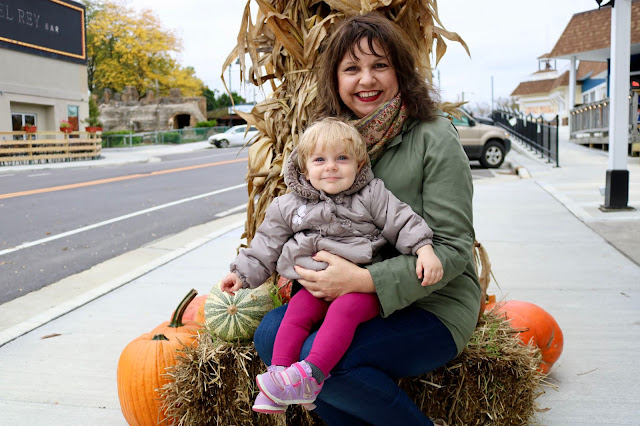 I found this Polish Restaurant and I almost died!  I'm almost 100% Polish;  when I looked at their menu, I recognized a lot of the foods I grew up with.   It was too early in the morning so we didn't eat there, but if I'm ever in the area again, we will! 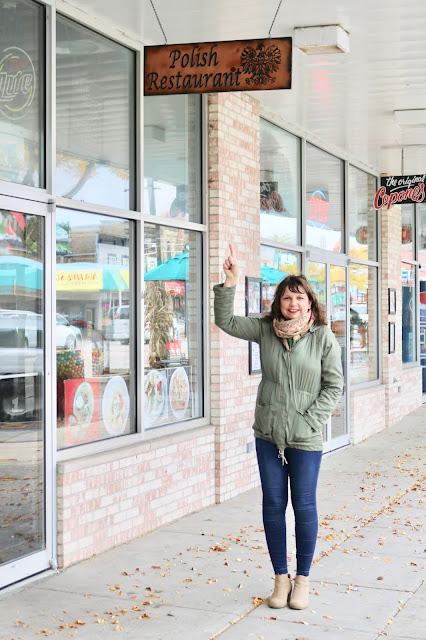 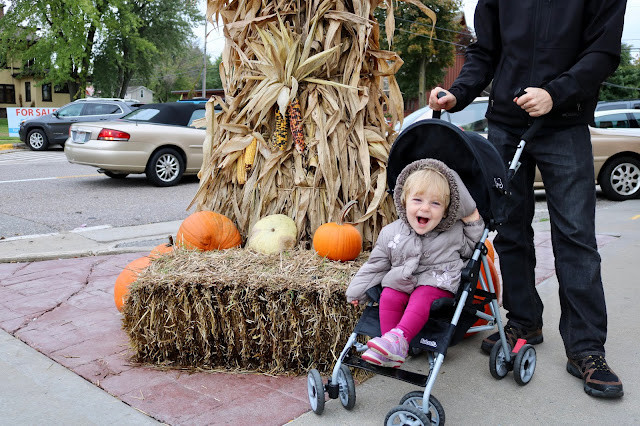 Have I started to bore you yet with an overload of Alethea photos?  ha ha!  I can't help myself,  she is just too cute!  I look at these pictures and I just ache to see her again.  Just a few more weeks until Thanksgiving and then I will have her in my arms again.  I just adore her so much.  Such a cutie pie! 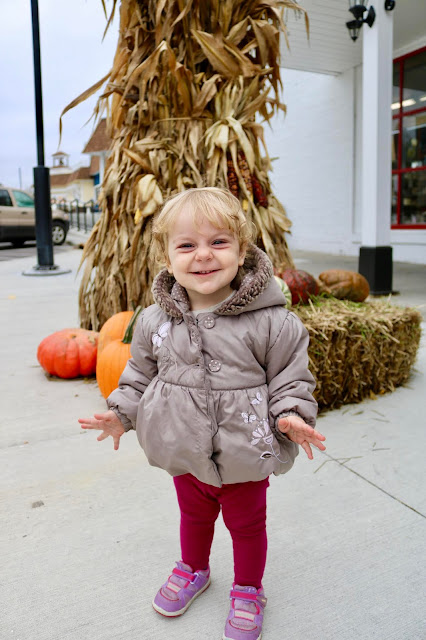 I just love her joy, especially for people she loves.  She has such an inquisitive nature.  I know all babies/children do, but she seems to be overly inquisitive, which is why she tore the hotel room apart.
She is always off exploring everything.  Such a doll is she. 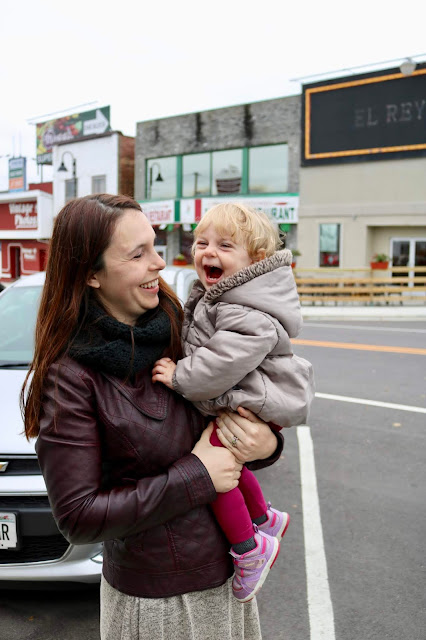 Next week, I will begin a new travel series:  our trip to South Dakota.  I know so many of you have been patiently waiting for that!