Our local mall hasn't been doing so good the past few years and has been losing a lot of stores.  Last year we lost Macy's, and this year we lost Younkers.  I was never that big of a shopper at either of those stores, but I enjoyed having them around as an option.  It's been so sad to see them both go.  But there was a silver lining for me because a Hobby Lobby took the Macy's retail space, and I've always wanted a Hobby Lobby in town!  I can promise you I'll spend a lot more money at Hobby Lobby than I ever did at Macy's.  And the other silver lining is I really scored big at Younker's "Going Out of Business Sale".  I got five pairs of really trendy jeans for less than $17.00.  Most of them were $5.00 or less.  And I also picked up cute scarves, tops, and shoes too!

Two of the items I picked up at Younkers "Going Out Of Business" sale was this sleeveless top by Calvin Klein and a pair of pom pom jeans. 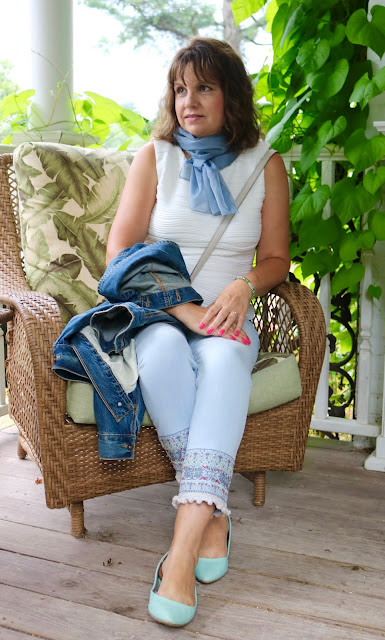 Would you believe I only paid $3.33 for these fun pair of pom pom jeans?  SCORE!  I've always been intrigued by the pom pom trend, I think pom poms are so fun and whimsical.  But I never purchased anything in this trend because I didn't want to spend a lot of money on something that may be out of style in a season or two.  But $3.33 I can handle!  haha! 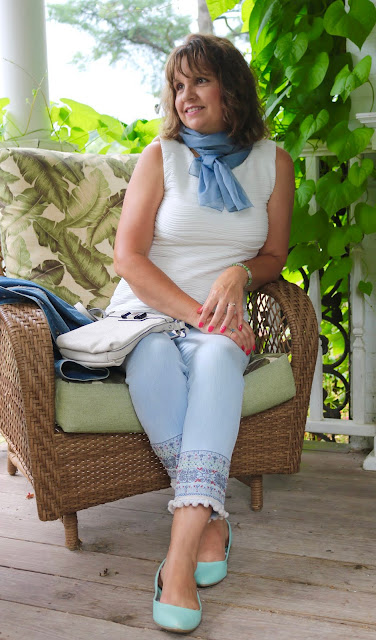 The jeans are a cropped length and have embroidery on the hem as well as the pom poms.

I chose mint flats from Express (old) to compliment a mint green thread in the embroidery. 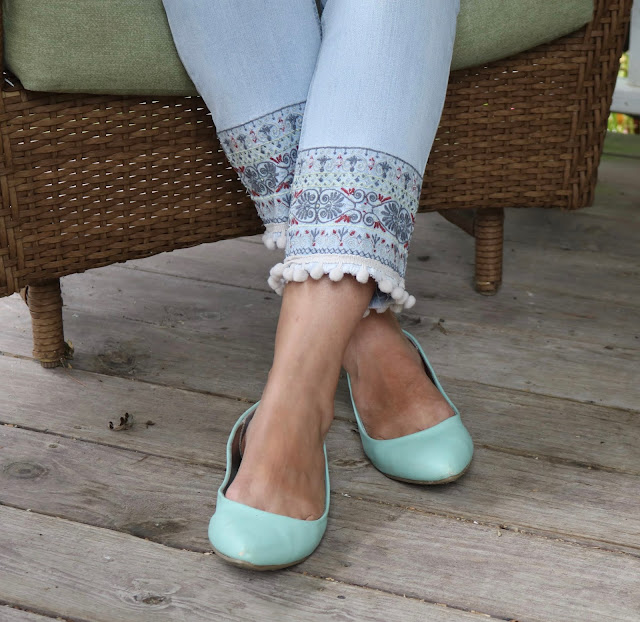 I picked a neutral bag and green jewelry to compliment the mint green shoes. 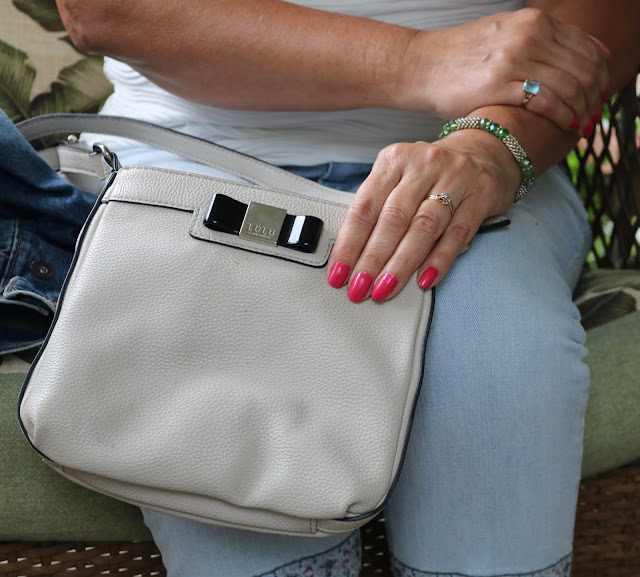 My Calvin Klein sleeveless top was priced over $50.00 by got it for around $5.00.  Another SCORE! It is tagged as a "suit separate" and is probably meant to wear under blazers and suits, but because I don't work, I will wear it alone or under a jacket.  I LOVE the raised wavy texture in this top. 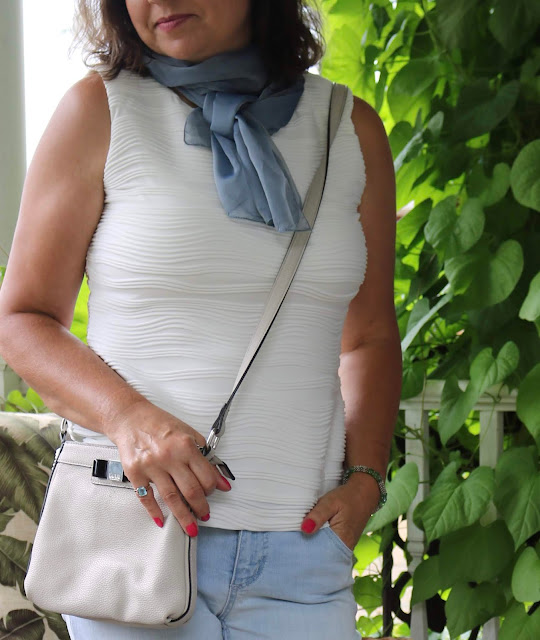 Since we are now in a transitional season here in Wisconsin, I added a light weight blue silk scarf to my outfit.  Anything heavier, would be too warm yet. 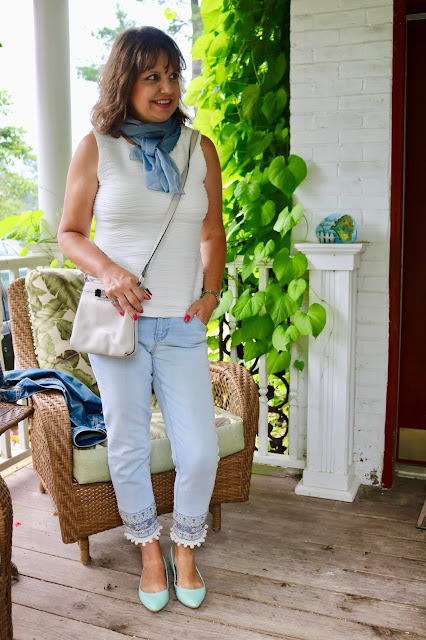 I also carried a denim jacket for those cool mornings and evenings, or too heavily air conditioned buildings. 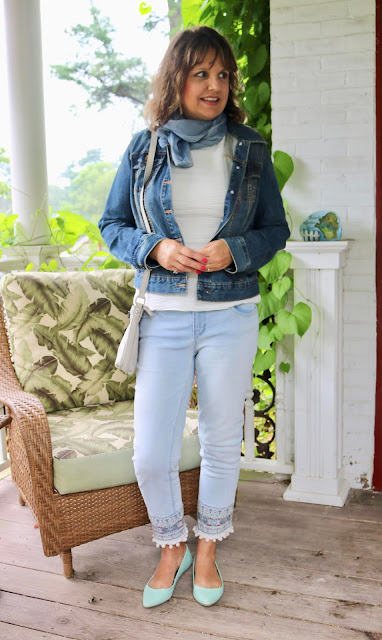 And now, here are some other ways to incorporate pom poms into your wardrobe from Pinterest!

Here is another pair of jeans hemmed in pom poms.  These are far more dramatic than mine, but I like them.  I prefer the style I'm wearing though. 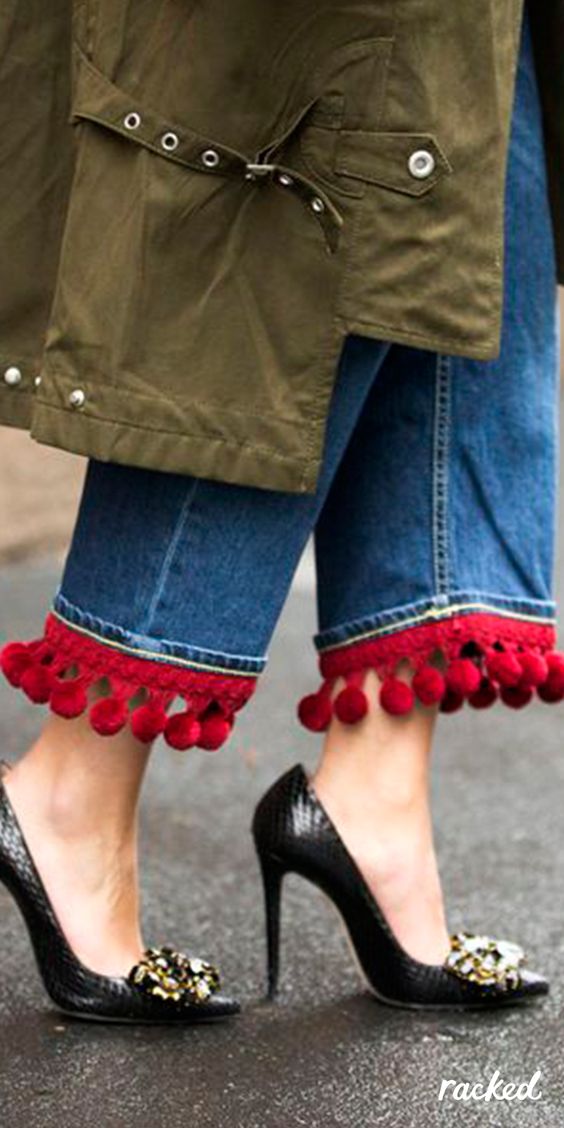 I've noticed a lot of the young girls wearing these pom pom shorts this season.  They are so cute! 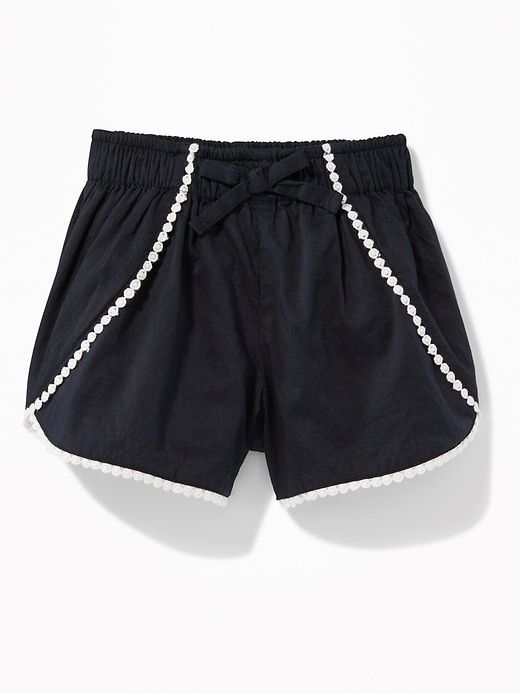 Wearing pom poms as a tassel at the end or a cord or tie is such a great idea! 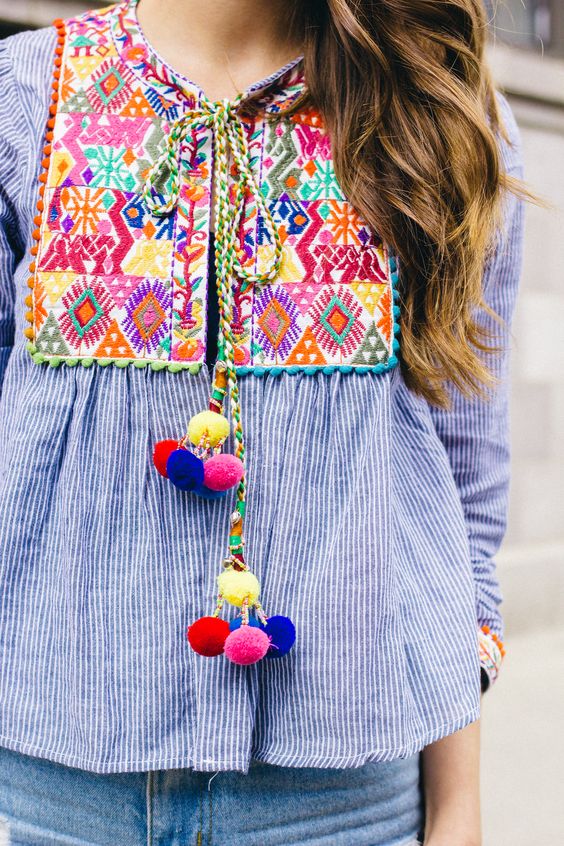 I've seen a lot of bloggers wearing these pom pom shoes last season.  I think they are pretty, but not for me.  The bag however I am totally sold on!  I would love one of these bags. 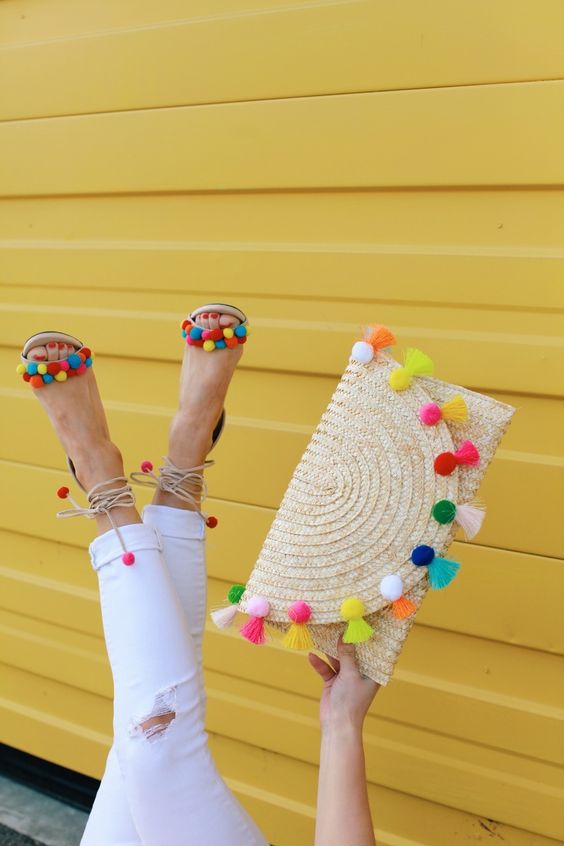 So what do you think?  Are you a fan of the pom pom trend?  Which pom pom item is your favorite? I'd love to hear from you!