Timeless Tuesday 'From the Garden'

Hello!  It has been raining non-stop in Northwestern Wisconsin.  It's been such a cold, wet, miserable Spring following a long, cold, snowy winter, so I have not been too happy lately.  I can't get out into my garden for anything, and I just watch the weeds take over my yard in abundance because of it.  It's so depressing.  But, on the positive side, I get to spend a lot more time in my craft room (with an electric heater running on June 4 because I'm so cold!) and participate in challenges I normally do not have time for.  I've always admired Flourishes Stamps from afar and treated myself to a lot of them at Christmas Time when they had a total transaction discount;  but most of them sat unused in my craft room since.  When I saw the Timeless Tuesday Challenge this week, and I had plenty of time due to the rain, I decided to pull out one of the many fruit stamps I had purchased but never used.  The challenge is this week is to feature a fruit or vegetable on your card.  I needed three anniversary cards this week, so I decided to use the pear image because it had a 'couples' sentiment with it.  I had never colored fruit before and found it a bit intimidating so looked at some cards in the Flourishes Gallery for inspiration.  I started with Copics, but didn't think I had the enough shades of green, so I dusted off my PrismaColored Pencils and Gamosol (Gees, it had been awhile since I used those!) and used those instead.  I forgot how to use them since it had been so long, but eventually remembered as I went along.  If I had more time, I'd redo this card because I don't think the coloring is the best, but I really don't think the recipient will even notice...so better luck next time! 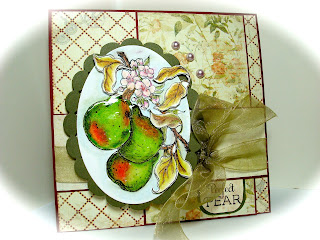 The layout is from Splitcoaststampers (SC402) and the paper is from Prima.  I stamped the image twice, and colored, cut out and popped up on dimensionals a few of the leaves that went past the frame.  Adhesive pearls and ribbon were added for embellishment.  Because I wasn't happy with my coloring, I added some Crystal Effects to the pears and put pink Stickles in the middle of the flowers. 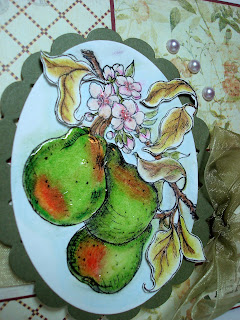