Hello!  This is my third post of our second Vacation Day in Springfield, Missouri.  We crammed a lot into our week, because we'll probably never get back in that area again, so that's why I'm still talking about day one.  AFTER our morning at the Springfield Botanical Gardens and Bass Pro Sports Shops, we took a drive into the country to see the Smallin Civil War Cave.  Missouri is filled with caves, and we certainly had our pick of which one to tour, but we chose this one because a cousin recommended it.  A year ago my husband and I took a trip to North Carolina and while there we also took a cave tour.  That cave in North Carolina and this one in Missouri were so completely different.  It was neat for us to see such a different type of cave than what we previously experienced, even though my son was disappointed that there were no stalagmites.  The cave in North Carolina was very small and tight, and if you suffered at all from claustrophobia I wouldn't recommend going there, but it did have lots of stalagmites and was very beautiful.  The Smallin Civil War Cave was large and open and we were told by our very entertaining tour guide that it had the second largest cave opening in Missouri.  The first picture shows what the cave looks like when you first step in. I love the way the light looks through the large opening. 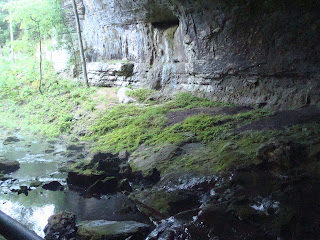 The tour has cement floors and railings which are above the flowing water beneath. That is my husband and daughter in the photograph. 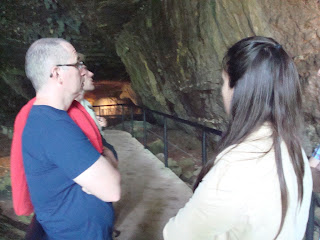 Here's a view of the colorful rock walls. 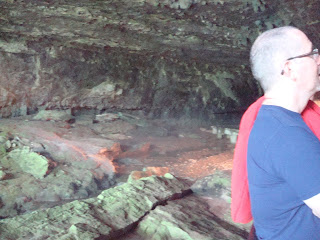 Sorry for the horrible pictures.  I didn't take my very expensive camera in the cave with me, and I used my small compact camera instead.  That's my son and me in the picture below.  There was lots of moisture in the cave, hence my flat hair! 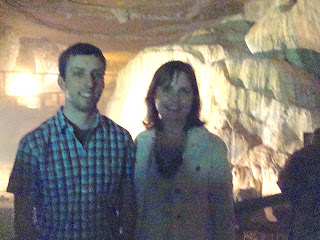 And this is a picture of where the cave tour ends.  The tour lasts about an hour and the guide tells you everything from past historical use of the cave to all about the rocks and creatures living in the cave.  It is really quite interesting.  Contrary to the name of the cave, it really doesn't have a civil war history.  A previous owner of the cave collected civil war memorabilia and had a museum above the cave and created tall tales of how the men hid in the cave to avoid fighting in the war.  Although the cave was used by indians and local people for refrigeration purposes and temporary shelter, it was never used by AWOL soldiers. 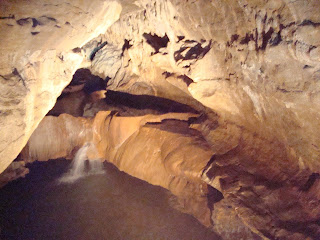