Hello! Today I have a kitchen set that I made with the 'Mama' image from Wink Wink Ink. I was inspired by Katie Smith's Applique Projects in the Paper Craft Planet Wink Wink Ink Group, that I decided to try it for myself. I made a kitchen towel, a covered mason jar, and a card. Here is a group photo. Because I thought the image was very country looking, I kept all my projects in the 'country style' and incorporated the same homespun fabric on everything. 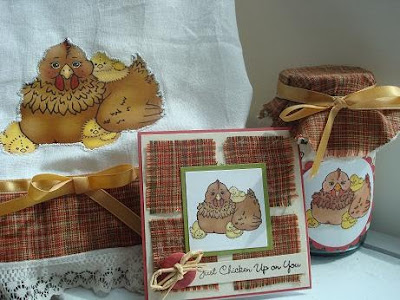 Lets start with the details on the towel. I bought a plain, white cotton towel from JoAnn's called "Aunt Martha's Flour Sack Dish Towel'. I printed the image onto photo paper called 'Art Wear Design Sheets', also purchased at JoAnn's. Because Wink Wink Ink Images also come pre-colored, you can do things (like applique) with their images that you couldn't do with regular black and white digital images. After I printed the image, I cut it out and ironed it onto the towel. Now, with the paper I used, you could stop there. There is no need to Applique if you don't want to or don't have a sewing machine. But I went ahead and did the applique (a zig-zag stitch around the image) just for extra stability. Here is a close up. 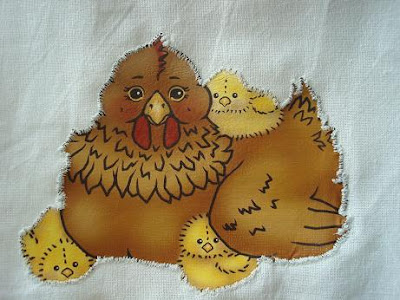 Then, to make my towel a little prettier, I sewed on some plaid homespun fabric, lace, ribbon, and a bow. 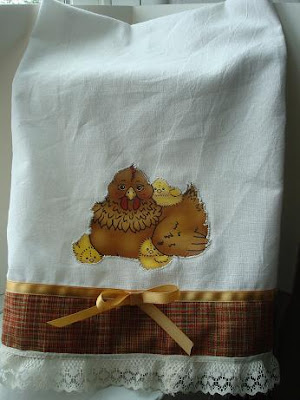 For my next project, I decided to cover a Mason Jar. I first took a piece of Kraft paper and stamped a little chick and the word 'Cluck' all over it and glued it to the jar. Then I printed my image in black and white, and this time, I colored it myself with Copics. The top is covered with the same Homespun fabric used in the towel and tied in place with a ribbon. Won't this look cute sitting on a country kitchen shelf or it could also make a nice gift filled with dried ingredients to make a batch of chicken soup! 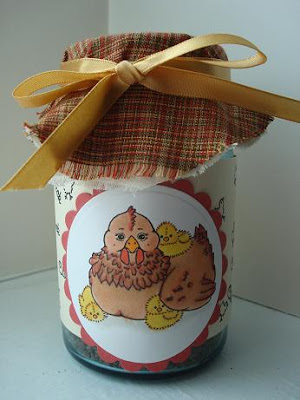 My last project is a card. I used the same Homespun fabric, but cut it into squares and frayed the edges. I then taped it in place using double sided tape. This is also a pre-colored image because I was running out of time to color it myself. That's the beauty of pre-colored images...they save you a lot of time when your running short on time! LOL! A button and Raffia was added for embellishment. The sentiment is from MFT. 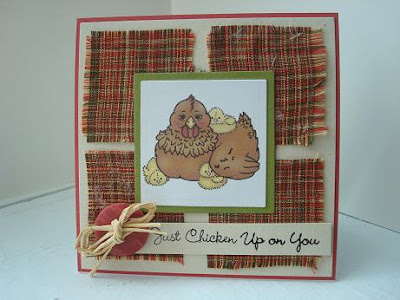 I hope you enjoyed looking at my little country kitchen project today. Have a great day! Amy