Hello! I'm back from my weekend in Chicago to see my daughter's Senior Recital at College. Since I posted her recital invitations, I thought I should post some pictures of her recital. It was a very stressful time, because first we had to drive 6 hours to get there, then we quickly checked into our hotel and ran around town trying to find food for the big event. I think we had to go to 3 different grocery stores to find everything. Then we had to hurry back to the hotel to shower and change. Because we couldn't get into the recital hall until 6:15, we only had 1 hour and 15 minutes to prepare the food and decorate. Talk about STRESS! I made the mistake of asking my husband to slice cheese while I decorated and we ended up getting in the biggest fight of our marriage that pretty much ruined the weekend for me. That jerk ! Ugh! I'm still mad at him. Although, we are now on speaking terms. Would you believe he said 'I can't cut cheese in a suit. You should have planned better. I wasn't counting on this. I thought all I had to do was show up.' I don't know which statement I was more furious about the 'I can't cut cheese in a suit' or 'you should have planned better'. The first statement I think is just ridiculous, the second statement is INSANE. First of all, its not like I was not dressed up too. I bought myself a brand new $80.00 dress for the occasion. Secondly,cutting cheese is not a messy, sweaty job. And lastly, ' I should have planned better.' OMG I did EVERYTHING and he did NOTHING! I made the invitations, I bought all the supplies, I made the hotel reservations, I packed the totes with everything we could possibly need, how could I plan any better? UGH! Men. Thankfully, the women in my life showed up and rose to the occasion. A good family friend of ours also drove the 6 hour drive to Chicago and she just took over the food so I could just decorate. Then several of Ashley's college friends rolled up their sleeves and helped out. I never would have been able to able to do it without them. And they all had such sympathy for me when I told them what my husband said. But of course, he just became furious with me when he found out I told them. I said 'Sorry, but I needed to know that I was not crazy to not be seriously offended by your comment.' Don't worry, he never reads my blog, in fact, he's never read a single post, so he'll never see this. This is my little world to 'vent', and I expect lots of sympathetic comments from you all at the end of this post. LOL!

But OTHER THAN THAT, the recital was wonderful. Ashley sang like an angel, as always, and received a standing ovation for her performance. And she looked like an angel too in her sparkly eggplant gown. 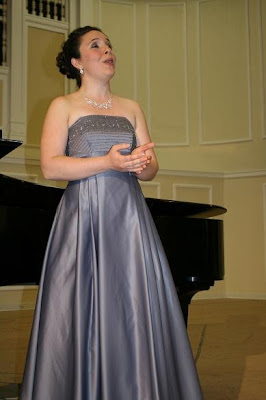 In my mad rush to have everything done, I didn't get any photos of the decorations other than this. I really wanted a picture of the food table, but people 'dove' into it right after the recital, so it was ruined by the time I got to it. And I didn't have any time before the recital to take pictures. Anyway, the stage is HUGE, so I couldn't do much. I just put two round tables on either side of the piano, added a couple of candles and some flowers. My dear friend Leni lent me all these gorgeous black candle sticks that had beautiful crystals hanging down. They were PERFECT for the recital. For the food table, I just made a row of these candles down the center of the table, added two more big bouquets of white and lavender flowers, and then threw on some pretty black fabric also lent by Leni. Everyone said the decorations were very lovely and so well put together. Thanks LENI! 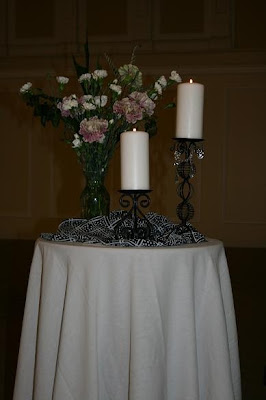 After the recital was over we took these family photos. This is Ashley with her fiancee Jason. 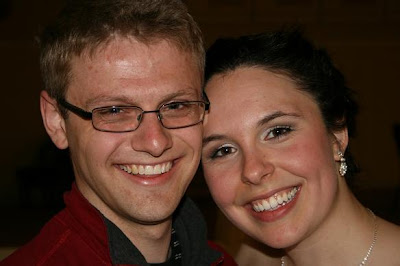 Here is Ashley with her baby brother. He doesn't like to be photographed. 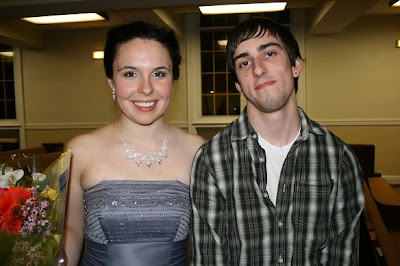 This is me and Ashley. I do not photograph well. I need to stop turning to the side and take my pictures straight on. I always look about 20 lbs heavier in a picture than I am in real life. I use to never let people take pictures of me, or post them, cause I hate the way I always look. I like the way I look in a mirror, I just don't like the way I look in a photograph. But then I stopped that nonsense, because I realized if there are no photographs of me, then there is no history of me. So now, I post photographs of myself whether I like them or not. 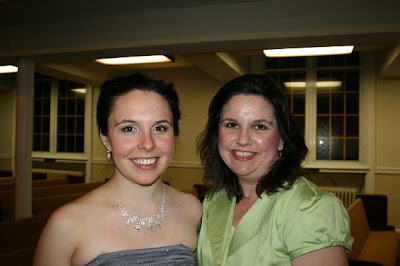 Here is a my mean old husband and my daughter. Sorry, but I'm still mad at him. I suppose someday I'll regret writing this post, but not now. Pray for me! LOL! I'm still so upset with him. I suppose I should not have told you all this, and I should have just pretended it was the perfect weekend and nothing went wrong, but that's not me. I'm honest. It gets me in trouble all the time, but I speak from my heart. 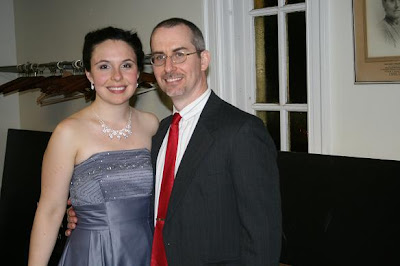 And finally here is Ashley coming out from back stage to receive a standing ovation. Doesn't she look so happy and glorious? She was so happy the event was finally over. It was a lot of stress and pressure for her. When it was over she said 'Now, I can just think and work on the wedding'. I sarcastically laughed and said 'YEAH! That's all I have been doing the past 6 months!'. LOL! 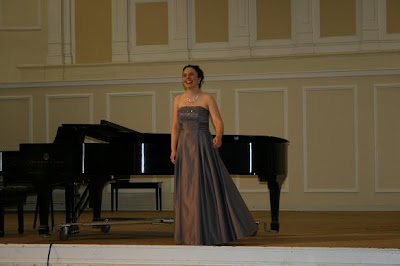 We go back to Chicago in just two weeks to see my daughter's college graduation. Pray my husband and I don't get in a big fight again so that event is ruined for me also! LOL! Ashley was chosen by her school to sing for the graduation service. She was chosen not only for her singing ability, but also for her Christian Character, Leadership, and Service to others. We are so proud of her. She said she is really nervous because this will be the largest group she has ever sung for before, and she has sung in front of audiences of thousands. So keep her in your prayers please.
God bless, and have a good day! Amy