I am so excited to share with you today another one of my toilet paper roll creations!  This fall I've really gotten into creating fun toys for kids using toilet paper rolls.  I found all my ideas on Pinterest and created a special board of "Crafts for Kids".    Some of these toilet paper roll craft ideas come with templates and instructions and others have special downloads you can buy.  I never purchased anything to make any of my creations.  If I have a photo to go by, I can usually re-create myself.
If you haven't seen some of my other toilet paper roll creations, I created pilgrims and indigenous people for Thanksgiving and also an entire Nativity Scene.  The kids really loved the Nativity Scene and played with it a lot when they were at my house for Christmas.  I think it will become a Johnson Family tradition every year to illustrate the Christmas story with the Nativity Scene.
Now onto my latest toilet paper roll creation:  "David and Goliath".
My grandson watched a bible story video of the story of "David and Goliath" and loved it so much he constantly re-enacted it when he was at my house for Thanksgiving.  It was so funny watching him pretend to be Goliath and fall down and die multiple times a day.  I had to remind him that Goliath was not the hero of the story, because he seemed to be enamored with him in particular. 😁. Well, because he was so infatuated with the story of  "David and Goliath" when he was here for Thanksgiving,  I thought "What fun it would be to create  "David and Goliath" action figures for him.  Using Pinterest as my guide, this is what I came up with. 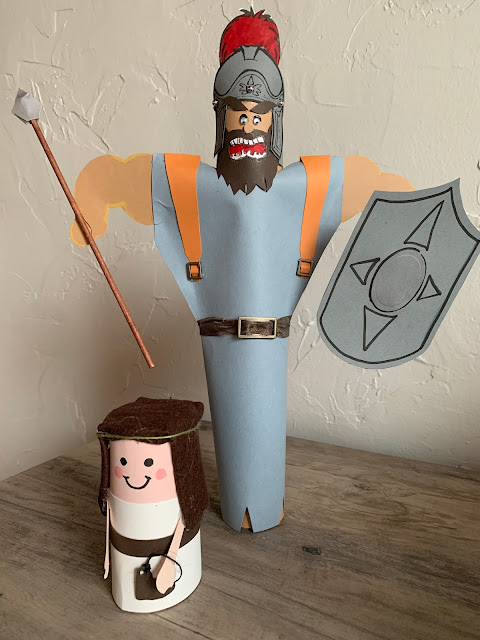 Isn't it great!  Atticus absolutely loved it!  I was able to find a pattern for Goliath but I did make some changes.  I found the pattern for the face, helmet, and arms on this website .  The instructions are in another language but I was able to figure it out.  There is a printable that you can download and print out on the website.  I printed out the helmet, face, and arms, but the rest I created on my own.
The shield wasn't on the website.  I just drew one on heavy grey card stock and cut it out on my own.  I added details with a black marker and even glued a separate oval piece into the center for dimension. 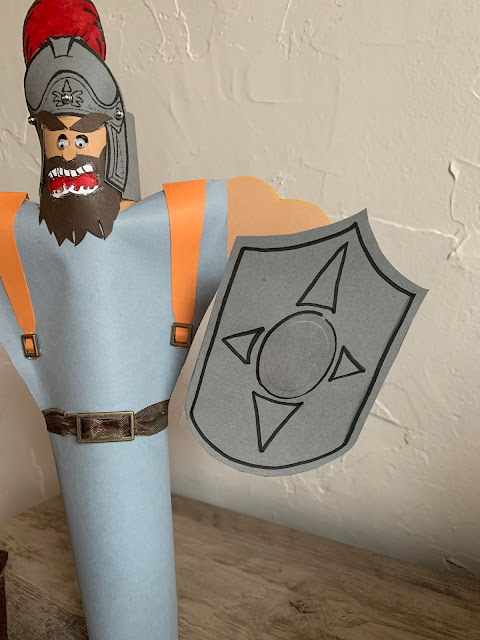 The original creator of Goliath used an old soap bottle for Goliath.  I however wanted to keep true to the toilet paper roll theme so I used a paper towel roll.  I took a very heavy piece of blue card stock, cut a whole just large enough to fit over the paper towel holder roll, and slipped it down the roll (bending it in half) leaving just enough of the top of the roll exposed for a face.  I then trimmed the paper on the diagonal for Goliath's chest and glued the sides together.  Then I trimmed down the rest of the blue card stock and glued it to the paper towel roll and cut some notches on the bottom for the skirt.
I followed the picture on the website and added the shoulder straps and belt, but I used real metal hardware from my stash, in addition to card stock and velour ribbon.
For the face I glued a piece of flesh toned card stock onto the top of the paper towel holder.  The teeth, mouth, beard, eyebrows, and nose are all on the website that I linked above.  I printed them out, and fussy cut them and glued them to the paper towel roll.  I used a black marker to draw two circles for eyes, then I glued on small google eyes.
The helmet was printed twice, once onto white card stock and once onto grey card stock.  I cut the feather portion out separately so I could color it with a red marker.  I added some silver metal embellishments from my stash to the helmet to make it look even more authentic and add some dimension. 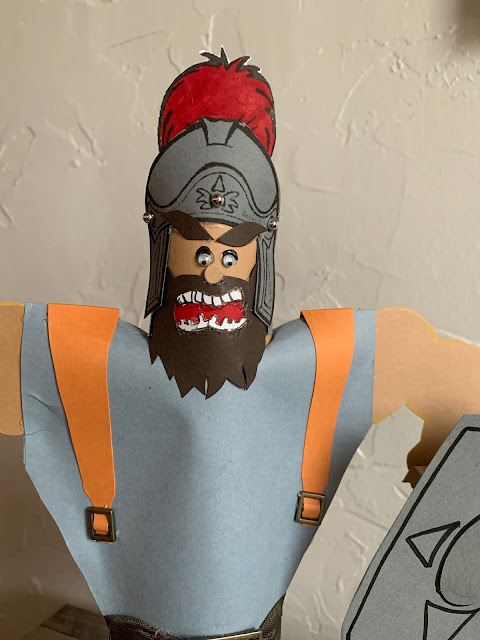 The spear is a lollipop stem you would buy in the candy/cake section of a craft store.  I colored it using a brown marker, then I added a tip by cutting a point out of silver metallic card stock and gluing it to the stick.
David was very simple to make.  I simply glued a flesh colored card stock to the top of a toilet paper roll then hand drew a face on.  I then glued an off-white card stock to the roll for his body and added some brown ribbon for a belt.  David needed arms to hold his sling shot to kill Goliath, so I fussy cut some arms out of flesh-colored card stock and glued them to the sides of the toilet paper roll.  I then created a sling out of brown card stock and brown twine.  I cut a triangle shape out of the brown card stock, punched two holes on either side, and tied on some twine.
The head piece is made with brown felt glued to the toilet paper roll and a piece of twine tied around the top. 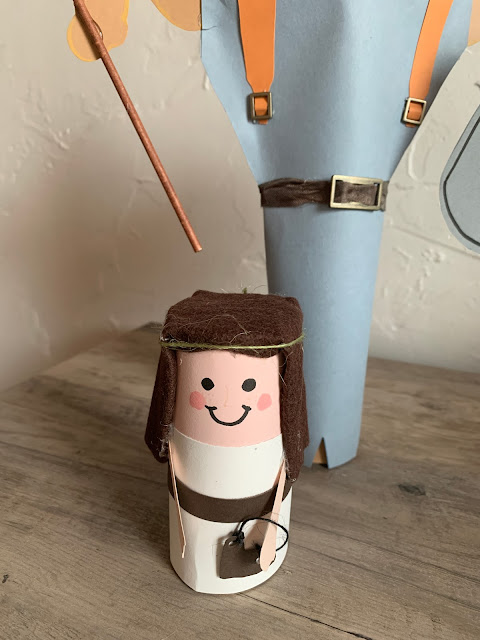 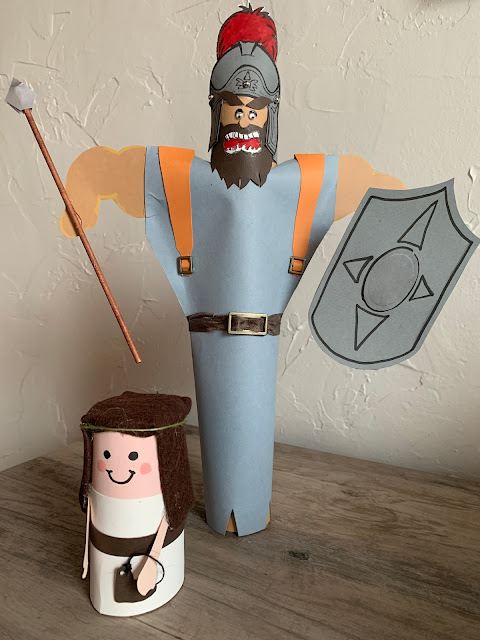 Atticus was so excited to see his new action figure!  Of course the first thing he did was make him fall down and die.  ha ha! It is so fun making things for my grand kids.  It's so interesting to me how after years of making cards, my hobby interests have evolved over the years and I'm able to still use my creative abilities and "my stash" to make other things.  I don't make as many cards as I use to, but all my "stuff" still gets used in other ways either with Bible Journaling or crafts with the grand kids.  I didn't have to purchase a thing to make this action figure set.  Everything was something  already owned. 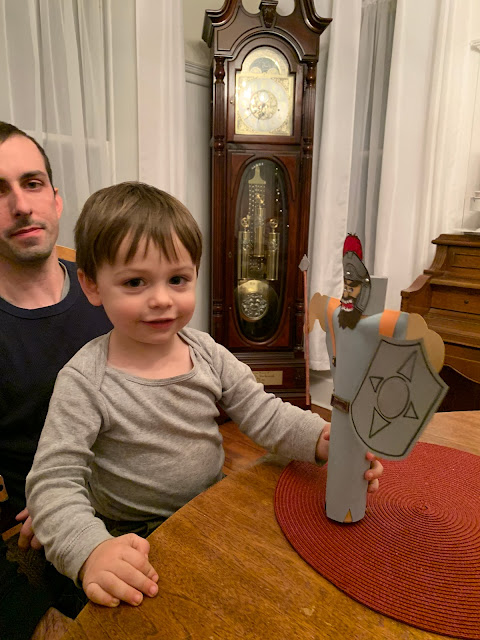