Hello and welcome back to another "Summer Highlights" travel post.  I have been spending the last few weeks highlighting some fun things I did this summer in my own neck of the woods.  Week one I shared "Hiking in the Driftless Region",   week two I wrote about "Celebrating the 4th, Going to the Beach, and Playing on the Porch.", and week three was all about the birthplace of Laura Ingalls Wilder.   I took last week off because I was on vacation, and now I am back with our visit to the Northern Wisconsin State Fair.
Before I continue with the post, I wanted to announce that grand baby #3 was born!  In the picture at the fair  below, my daughter Ashley was full term with "Elisha John".  My hubby had the idea to put all three of the grand babies in the picture.  It was so funny and coincidental that her belly was at the perfect spot to fit in the cow's head. 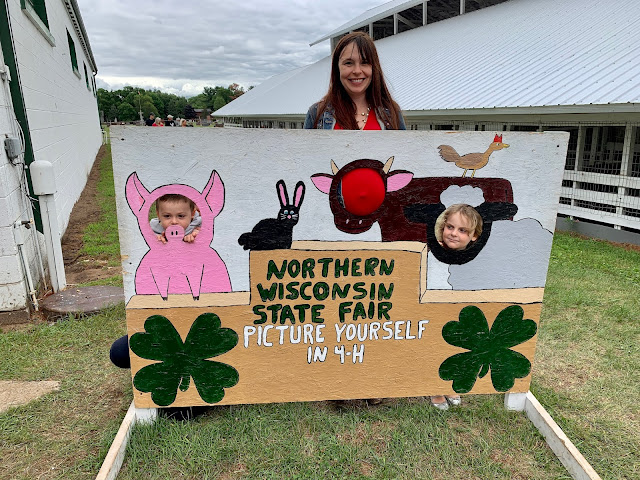 My grand babies are "city kids" so they have never been to a county or state fair before.  They really had a great time!
The first thing we did when we arrived was find a picnic table to eat some lunch.  We left late in the morning, and it was an hour drive, so by the time we got there it was lunch time.  We brought our own food and we were grateful we were allowed to take it in.  I know it seems weird to go to the fair and not eat the fair food (that's part of the fun of going to the fair), but it is very expensive and not very healthy. 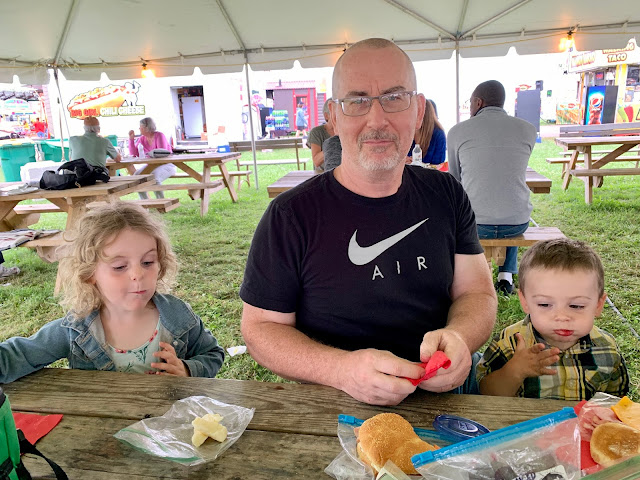 After lunch we headed towards all the indoor exhibits to see the handmade food items, quilts, art work, etc.  But then I saw that the little animal races were just about to begin, so we ran over to the bleachers to get a good seat....but first...a selfie! 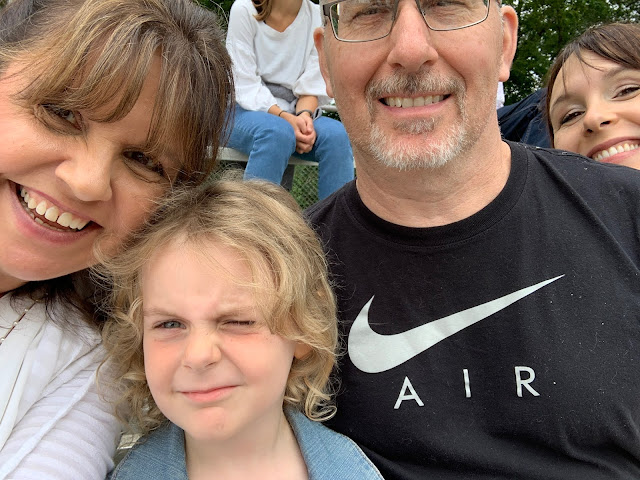 The animal races were so fun and cute!  They raced three different types of animals:  goats, pigs, and ducks. 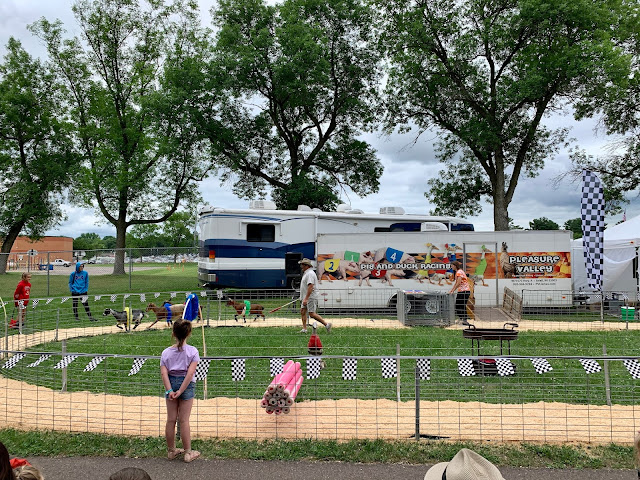 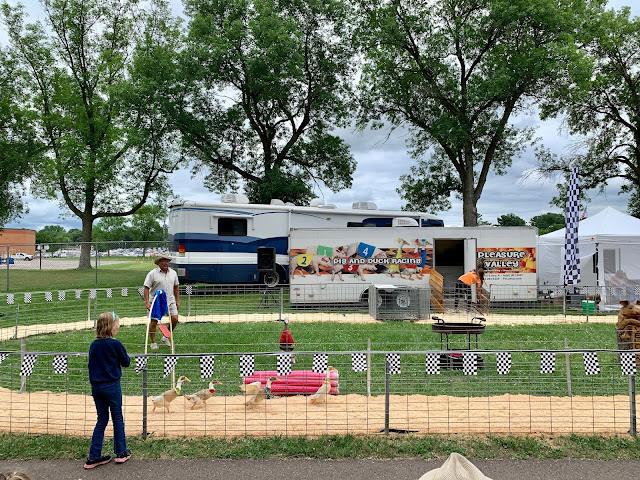 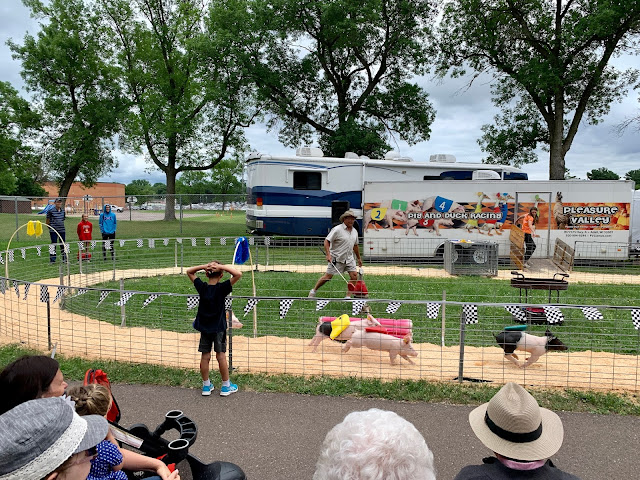 Before each race they picked a child from the audience to cheer an animal on.  If her animal won, she would win a prize.  Alethea was so excited to be chosen!  She did a great job cheering on her duck. 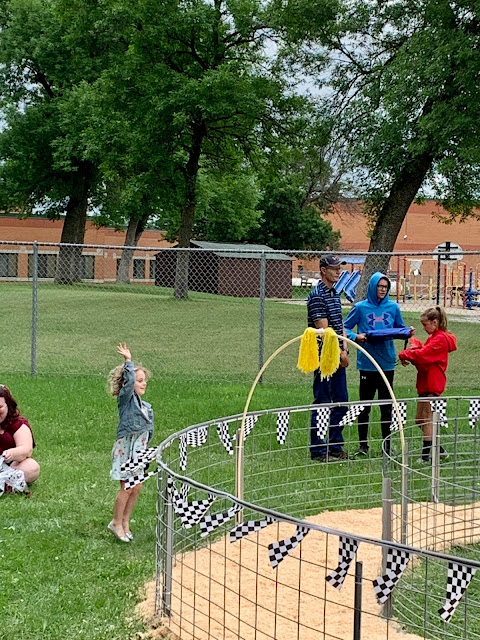 After the animal show we stopped briefly to check out a show choir that didn't sing but played instruments instead.  They were very entertaining. 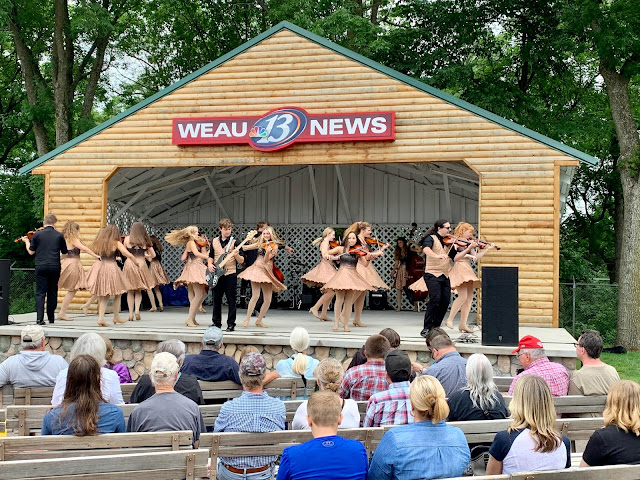 Every fair has professional exhibits where they show their newest gadgets and wares, but our favorite was the oldest invention:  products made from lama hair.  It was both educational and fun because they had lamas right in their exhibit and lots of information on how their products are made. 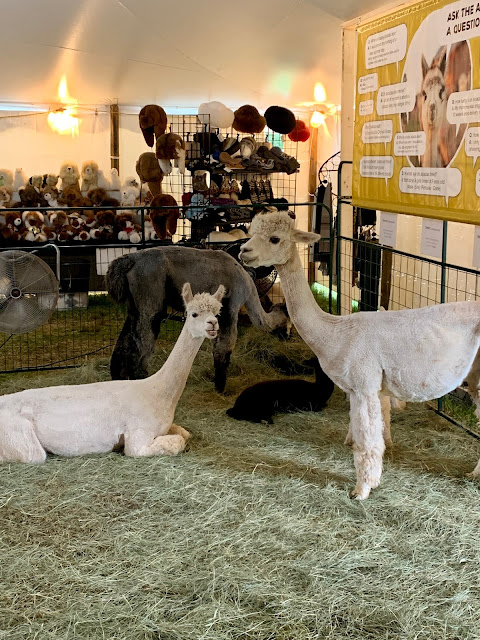 On the table behind my husband and granddaughter is some lama hair.  We were encouraged to touch it and we found out that if we left our hand there for a few minutes, and then removed it, the spot still stayed warm for the hair held heat. 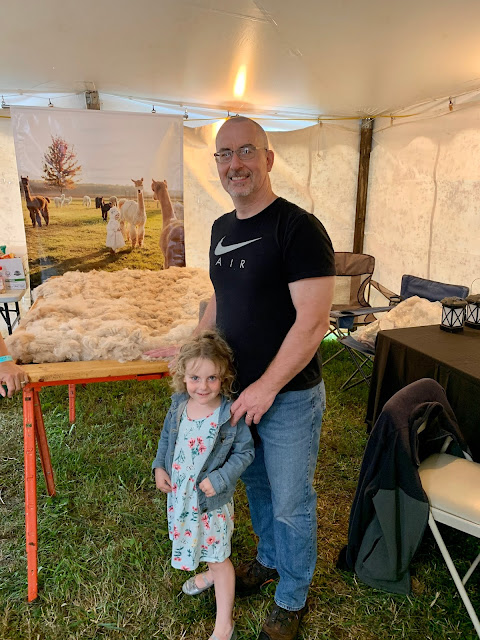 What would a fair be without rides?  The kids had never been on an amusement park ride before so they were so thrilled. 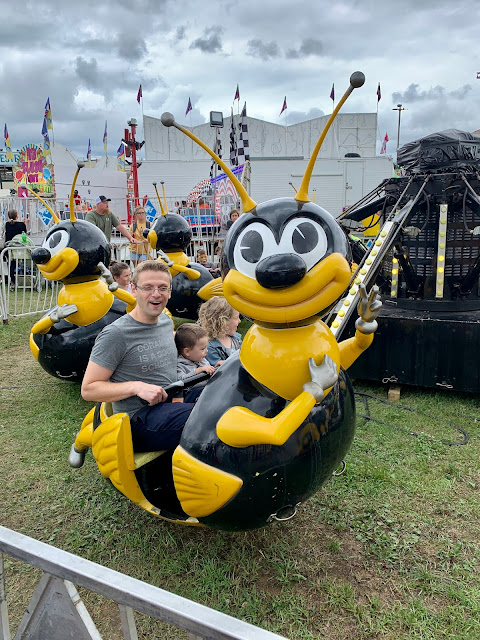 When we pushed Atticus' stroller up to the car ride, I asked him "Atticus, do you want to go on the car ride?".  He IMMEDIATELY started to crawl out of his stroller and ran to the ride, he was so excited!  He was so happy to just sit in the car, he had no idea it even moved.  But when it finally did move, he got so surprised and excited and was over joyed. 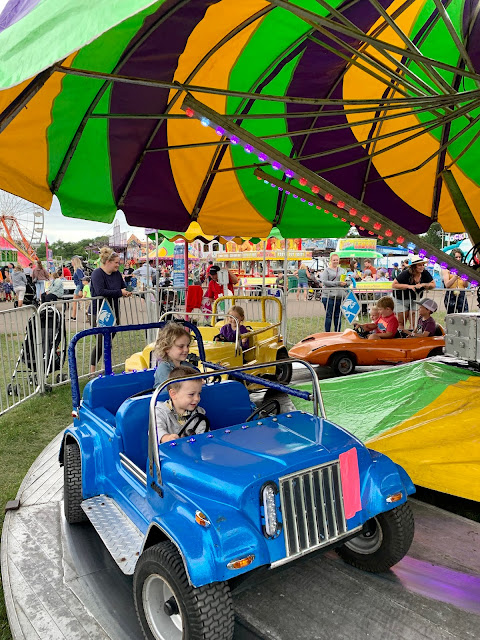 Animals are the highlight of every fair, so that is where we headed next. 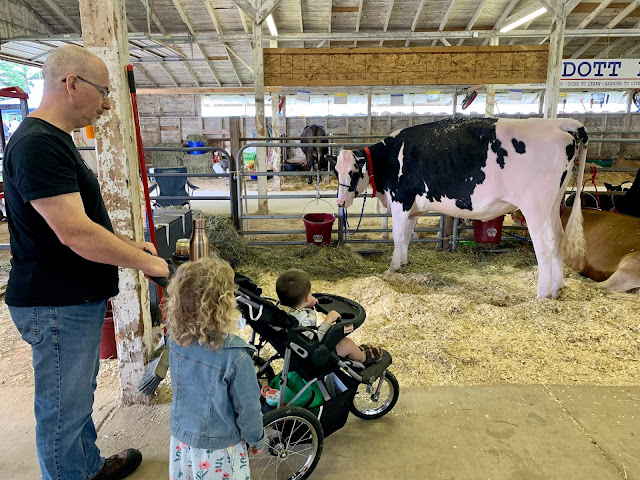 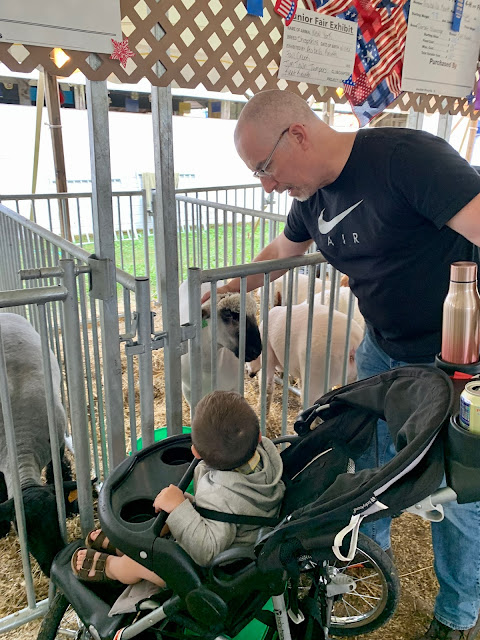 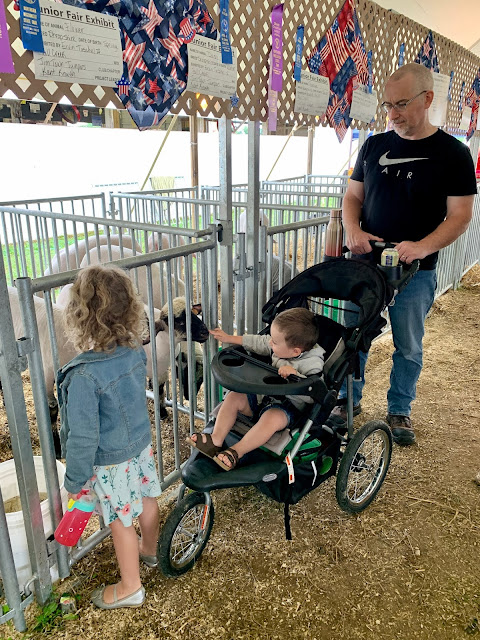 The kids were certainly fascinated with all the animals and loved how close they could to them. 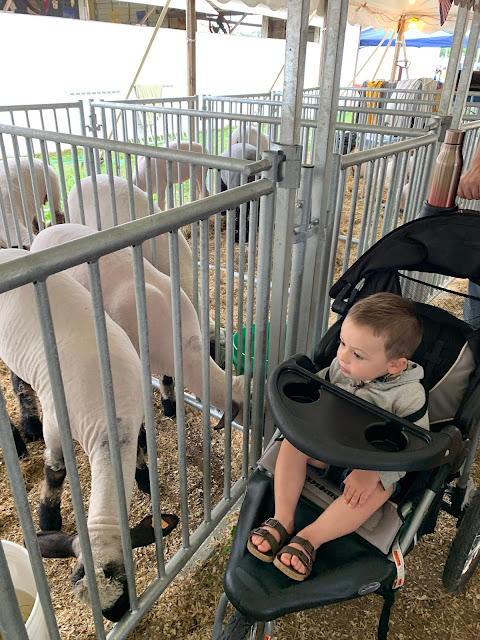 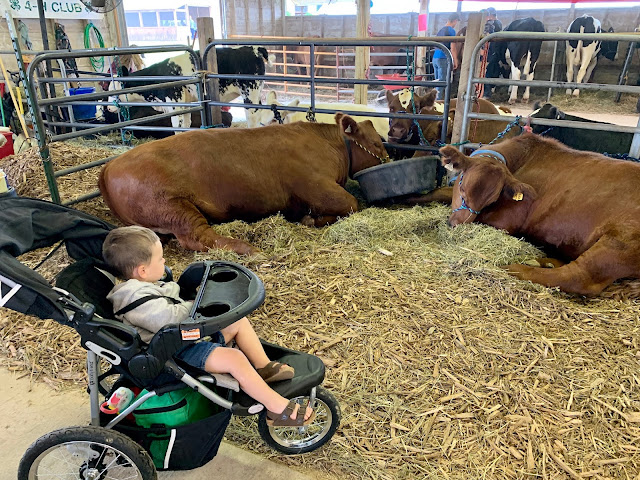 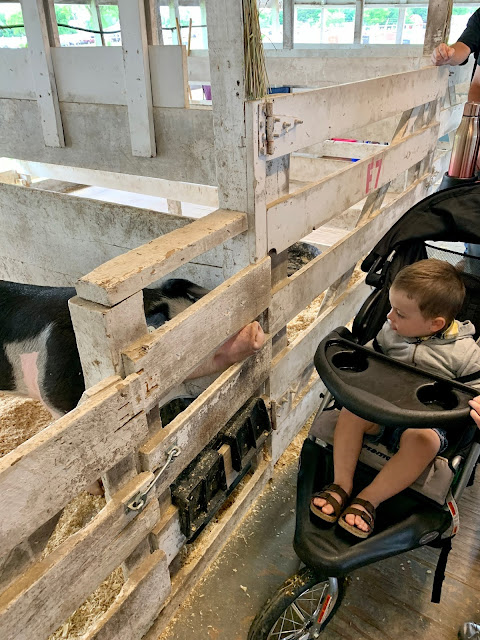 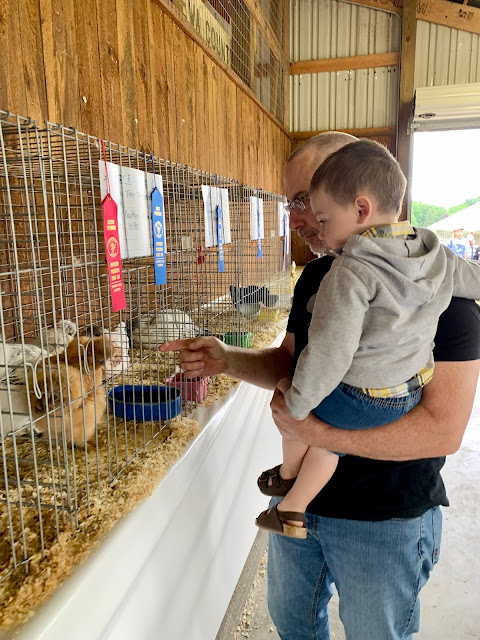 And finally, we reached the petting zoo where we were able to buy some food to feed the baby animals. 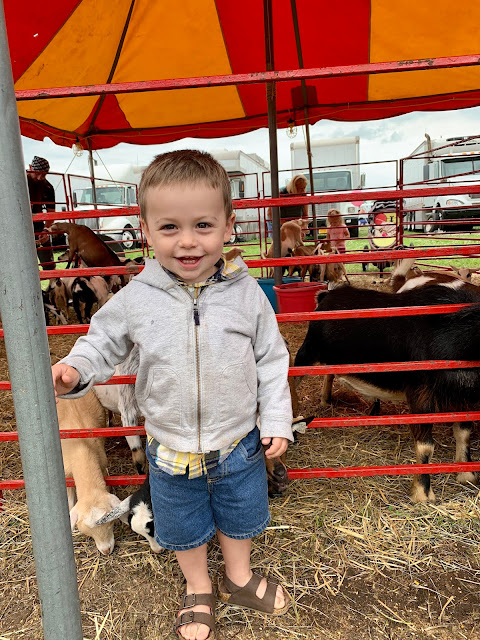 Boy, did the grand babies love this experience!  Just look at that face! 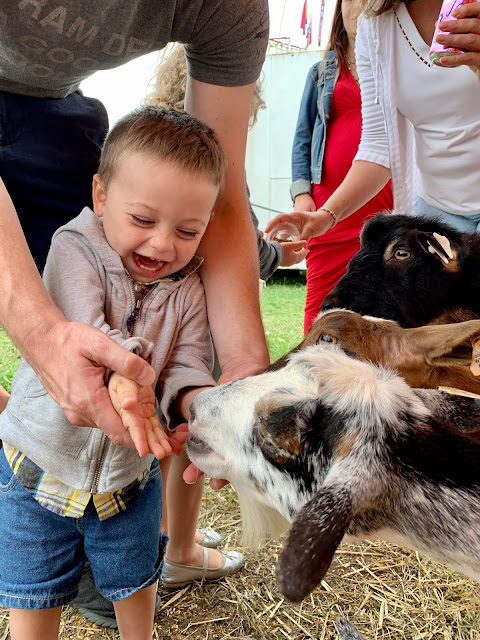 They sure had fun feeding these goats. 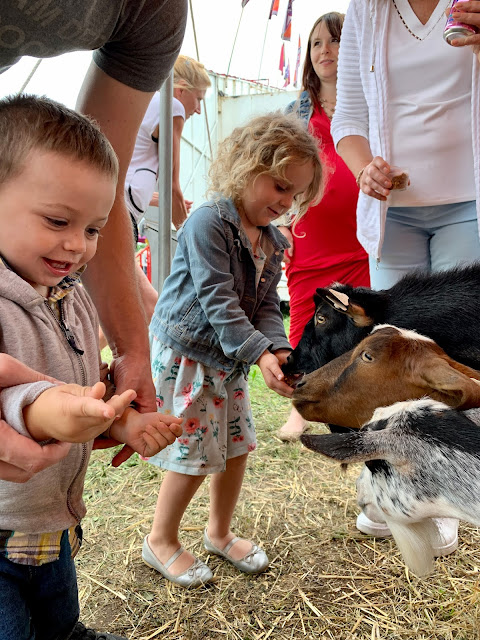 But the day didn't end at the fair.  We have been trying the last few years to show our daughter the new River Walk and Confluence Center in downtown Eau Claire since she spent so much time there as a teenager performing.  But every time we tried something hindered us like weather or a protest.  Finally, it seemed like it was going to work out, so we headed over there...but first we stopped at our favorite ice cream store:  Ramones! 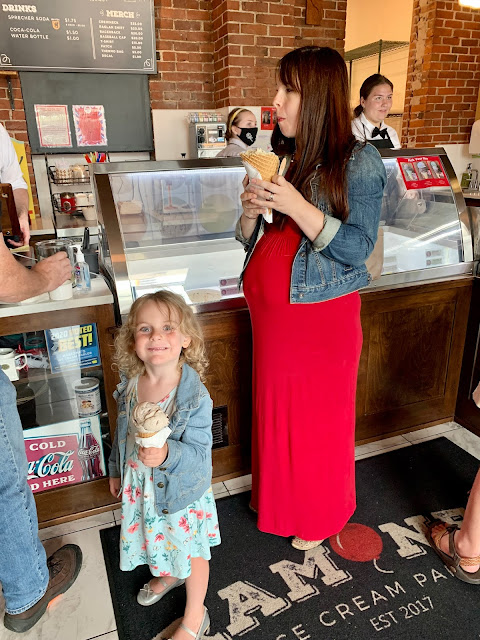 We walked a long the river and pointed out all the new buildings and how things have changed.  Then we sat at a bench to rest and eat our ice cream and Alethea says "This was the best day ever!".  Awww!  Did my heart melt when she said that.  Nothing makes a grandparent happier than her grand babies happy. 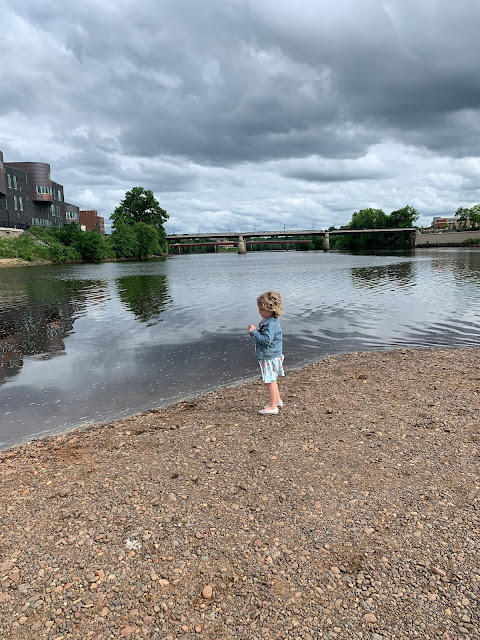 I will leave you with this cute picture of Alethea looking through this art sculpture along the river walk.  It was a super cool sculpture where one person could look back at another person on the other end, or you could just look through with no one on the end to get a unique perspective of what's on the other side. 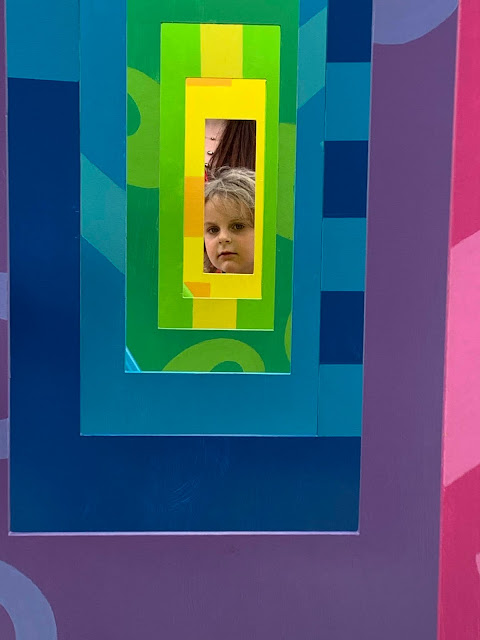 I hope you enjoyed our day at the fair, I will be back next week with one more staycation post then I will begin a new travel series.
Have A Great Day!  Amy
Linking Up with these Fabulous Blogs HERE!
Posted by Amy Johnson at 7:53:00 AM